October 29th was the day that we would leave Colorado behind us. Instead of the short 1-2 hour hops we had been making from one campground to the next in Colorado, on this day we had a 4+ hour drive ahead of us. UGH!  But on the positive side, the weather was good, the scenery was pretty and the drive was relatively easy on I-25 heading south. 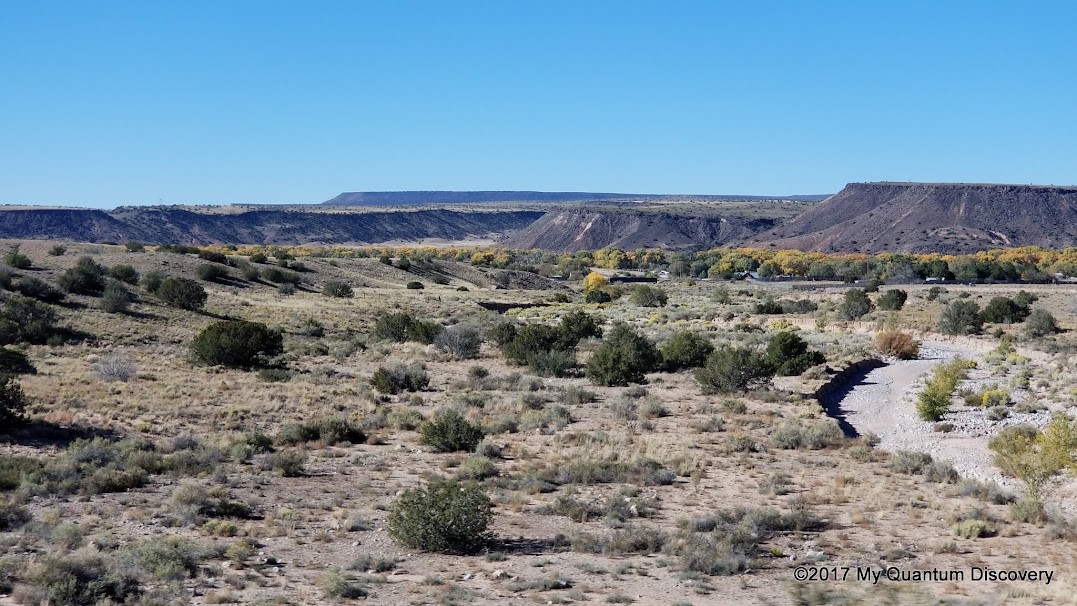 Our destination was Route 66 RV Resort (see our review) where we had stayed last March while we explored Albuquerque and Santa Fe. It would be a short two night stay staying on the same site (#1301), with just enough time to get caught up on laundry and other miscellaneous tasks. 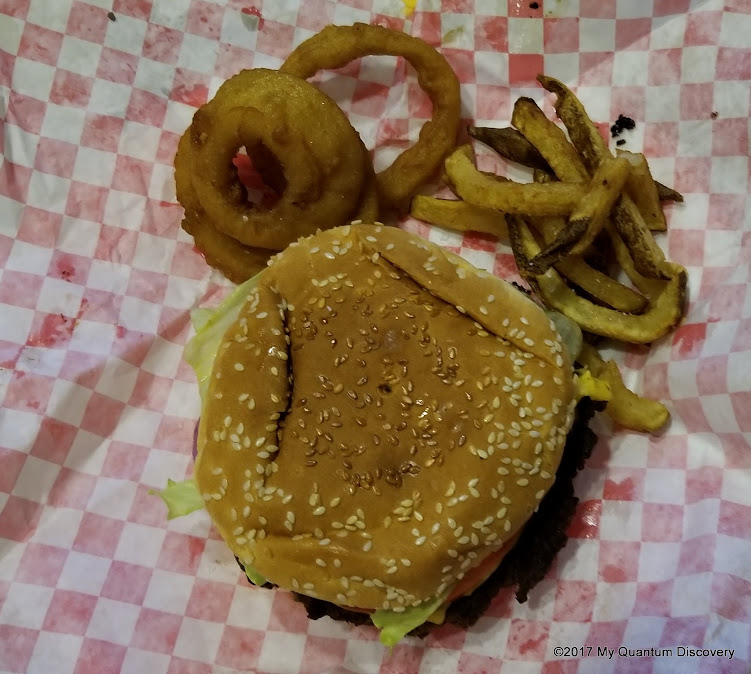 Several hours into our drive, it suddenly dawned on us that it was October 29th, our 24th wedding anniversary. (BTW, if Rob were writing this he would be very quick to point out that I totally forgot our anniversary several years ago but he isn’t so it will remain a secret.) Hard to believe that it’s been that many years – seems like it was just yesterday when we started dating. Back then, we certainly didn’t have any inkling that we would be enjoying this wonderful lifestyle together so many years later.

Across the highway from the resort is The Pit Stop where we had a delicious Laguna Burger last March. So guess where we went for our anniversary dinner? Yep, you’re right. But this time we did take out thinking that it would be more romantic and taste even better in the comfort of our own home instead of in a crowded diner atmosphere.

Besides we could toast our special day, washing down our burgers, fries and onion rings with martinis. Not exactly a gourmet meal but at least I didn’t have to cook and even though it was takeout, it was still ummm, ummmm good! Well, being take out it wasn’t quite as good as the one we had last March but it was still good. With all that cholesterol, think we’ll make it to our 25th? 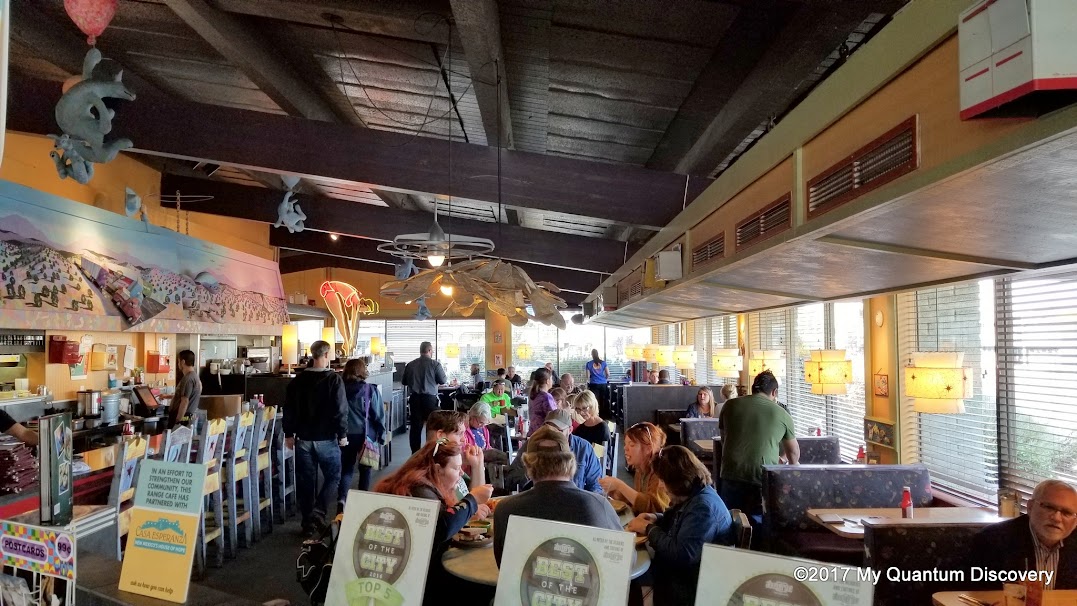 Although it would be a short stay here, there was a short window of opportunity to do a bit of sightseeing. The next morning it was out to breakfast at the Range Cafe. Cool place with very neat decor! A Veggie Omelette ($11.99) with sun-dried tomato, avocado, red bell pepper, green onion, tomato, basil, cheddar, cream cheese for me and Huevos Ranchero ($9.99) for Rob. Delish – would definitely return here next time we are in the area. 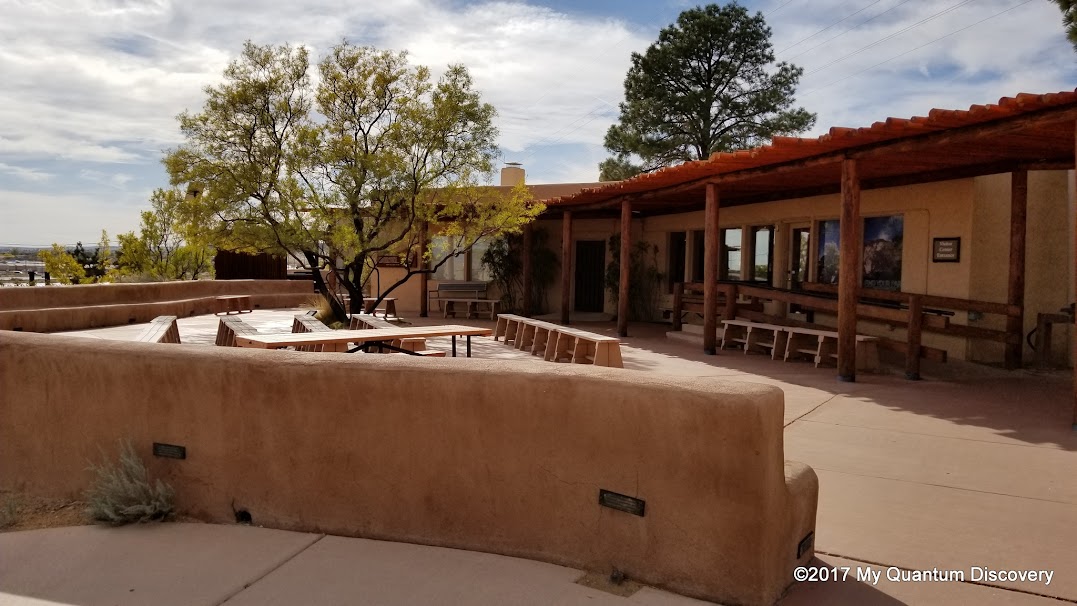 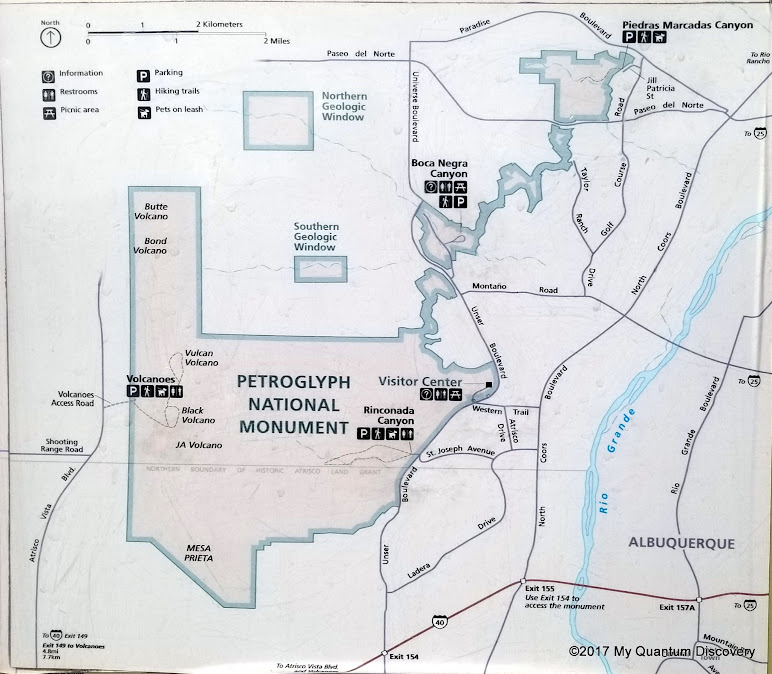 Then it was off to the Petroglyph National Monument. This monument represents one of the largest petroglyph sites in North America with designs and symbols carved onto volcanic rocks by Native Americans and Spanish settlers 400 to 700 years ago. Archaeologists believe that there may be over 25,000 petroglyph images along the 17 miles of escarpment within the monument boundary, carved from about 1300 through the late 1680s. It is estimated that approximately 90% of the monument’s petroglyphs were created by the ancestors of today’s Pueblo people.

The Visitor Center at the Monument was once the home of Dr. Sophie Aberle, a noted anthropologist. Nicknamed the “Measuring Lady” by the people she worked with, her practices led to better educational and medical programs for the Pueblo people. She and her husband sold their home to the National Park Service in 1990. 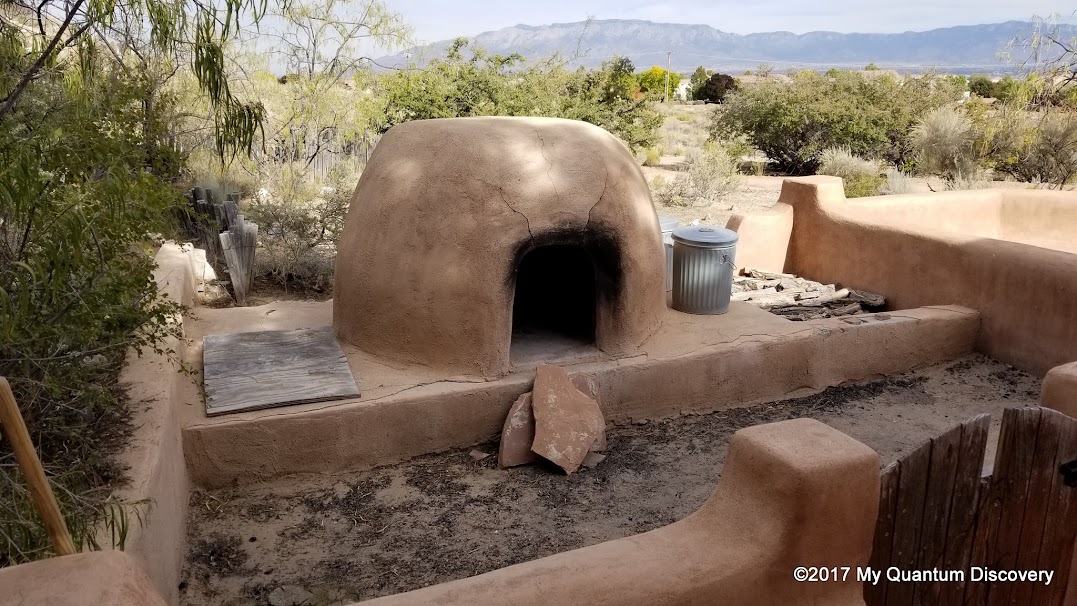 Outside the building were several petroglyphs as well as a hornos, a beehive shaped oven used for baking bread, still used today. Inside there were more displays and a small TV played a short video providing information about the history and the petroglyphs. Note that there is no entrance fee but the city does charge a parking fee of $1 on weekdays and $2 on weekends but federal passes (Annual, Senior, Access, Military, 4th Grader, and Volunteer) are honored so the parking fee is waived.

It was a short 3 mile drive from there to Boca Negra Canyon which is Spanish for “black mouth”, a name given due to all of the black lava rock in the area. Here a hike on the Mesa Point Trail, a moderate 1/2 round trip trail, would provide us with an opportunity to see over 100 petroglyphs. 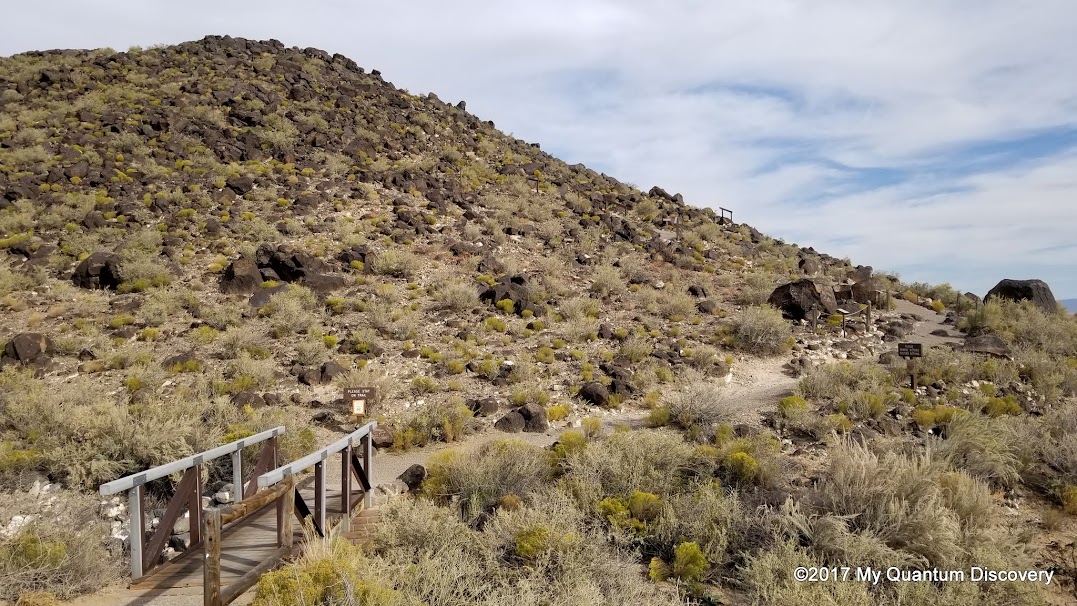 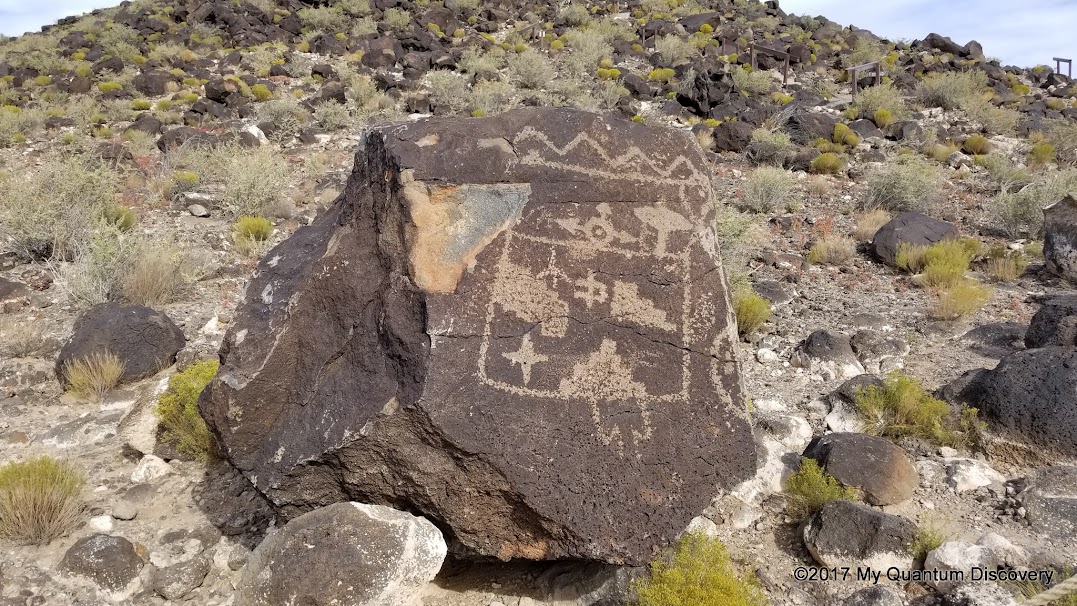 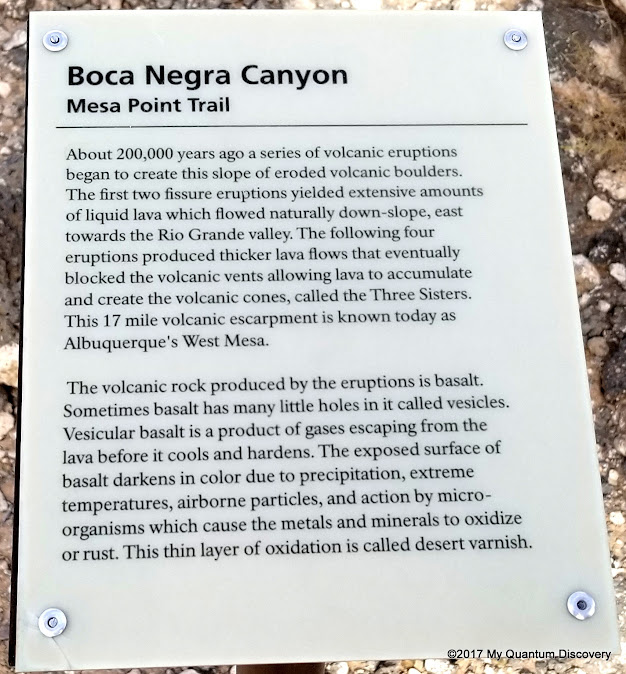 Along the way, there were informational signs which explained details of the petroglyphs, how they were made, why they were made, the people who created them and the surrounding area. Stopping at each one of the rock carvings, we contemplated what the art was meant to portray and why it might have been made.  Incredible that so many have survived for so many years especially with all of the development in the surrounding area.

At first, the trail didn’t seem to bad but then it started to rise steeply in elevation up a small hill covered with basalt boulders. Between the elevation, the boulders, the small rocks, the narrow trail and the pavement which was breaking apart in places, the walking became somewhat tricky. Since rocks and I tend to not get along very well these days, Rob continued the climb while I perched on a flat rock along the trail, enjoying the view. 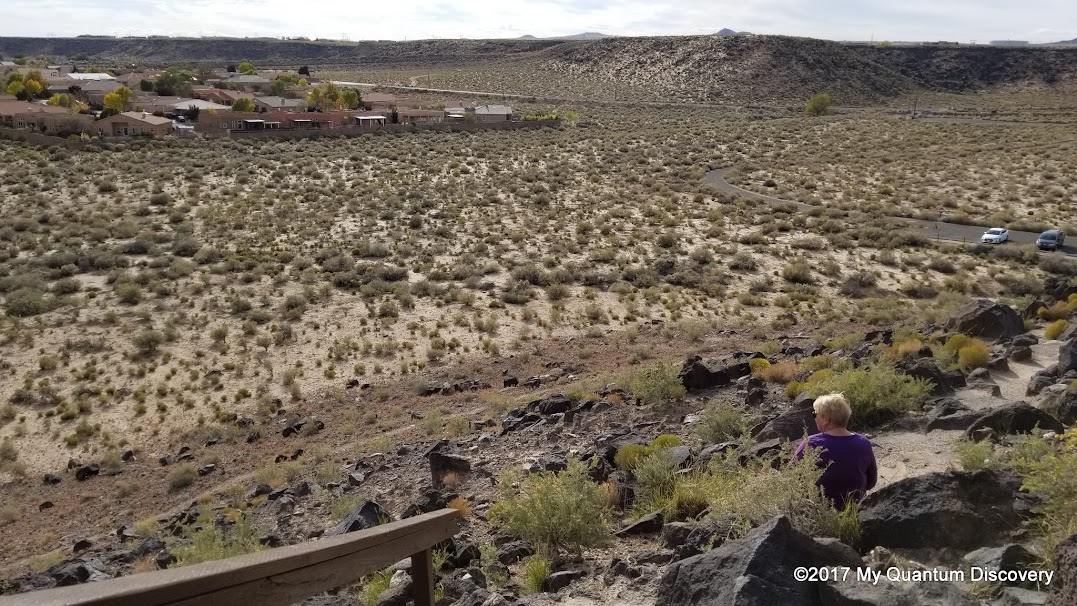 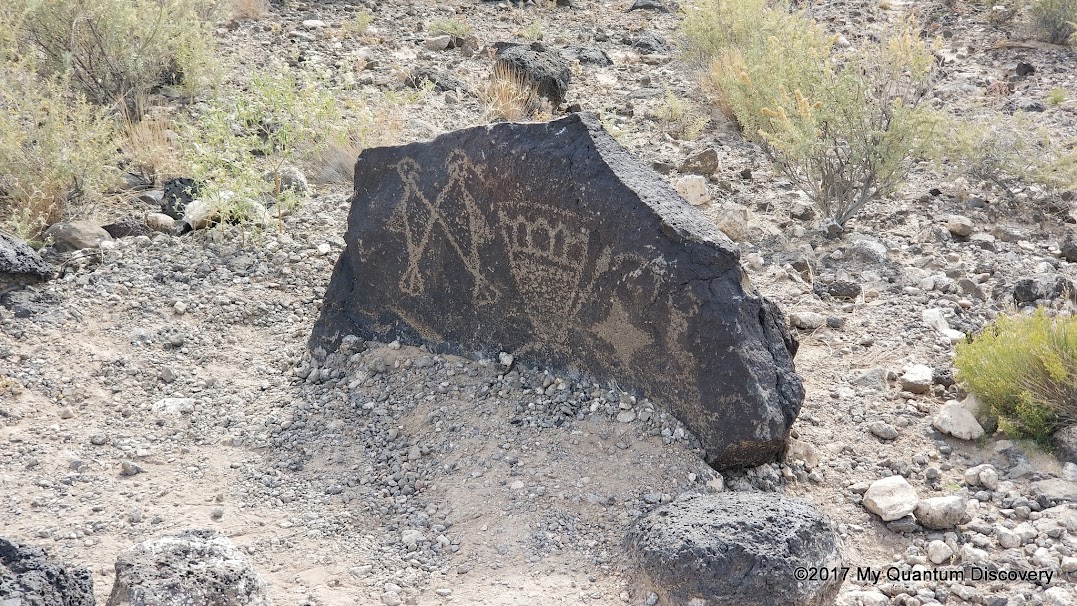 According to Rob, on the way up to the summit there were a lot more interesting petroglyphs and at the top, there was a 360 degree panoramic view of the area and the Sandia Mountains. I actually got to see some of this through the wonders of technology. Rob called me on a video chat (Verizon) so I got to walk along with him without doing any of the work – so cool! 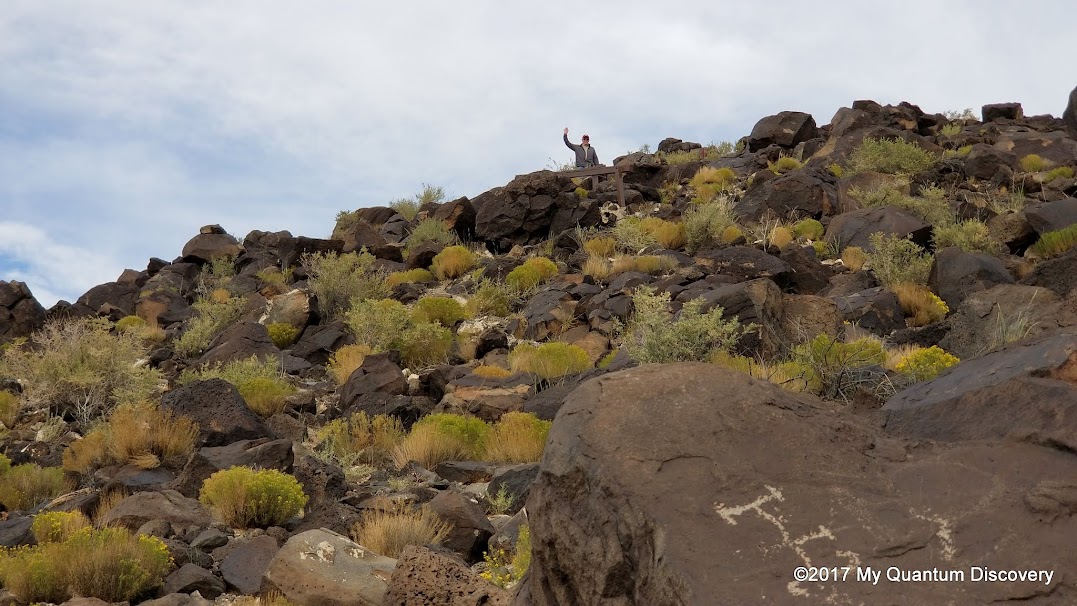 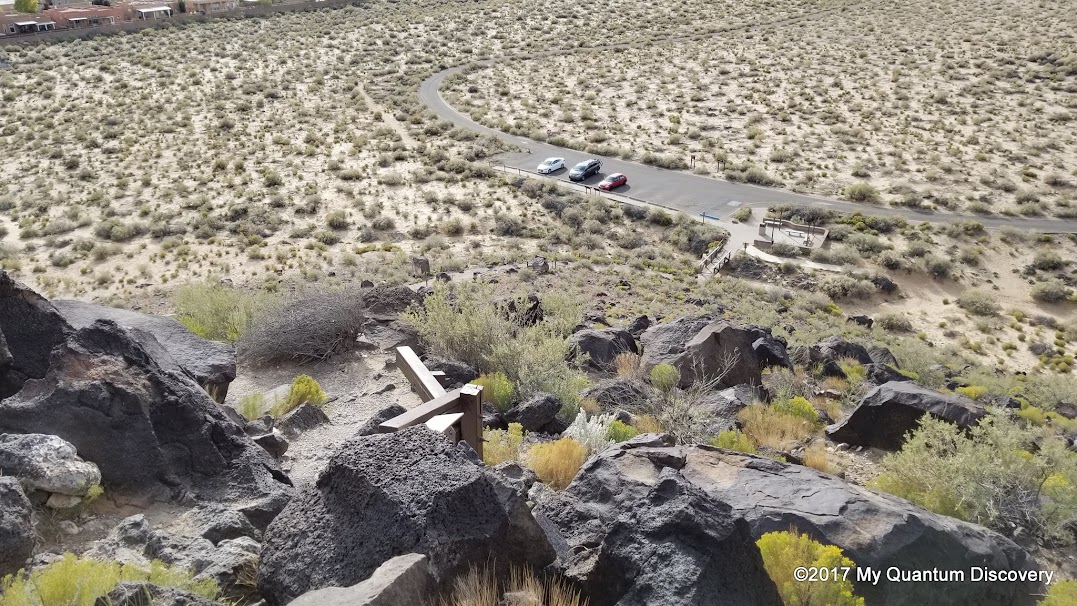 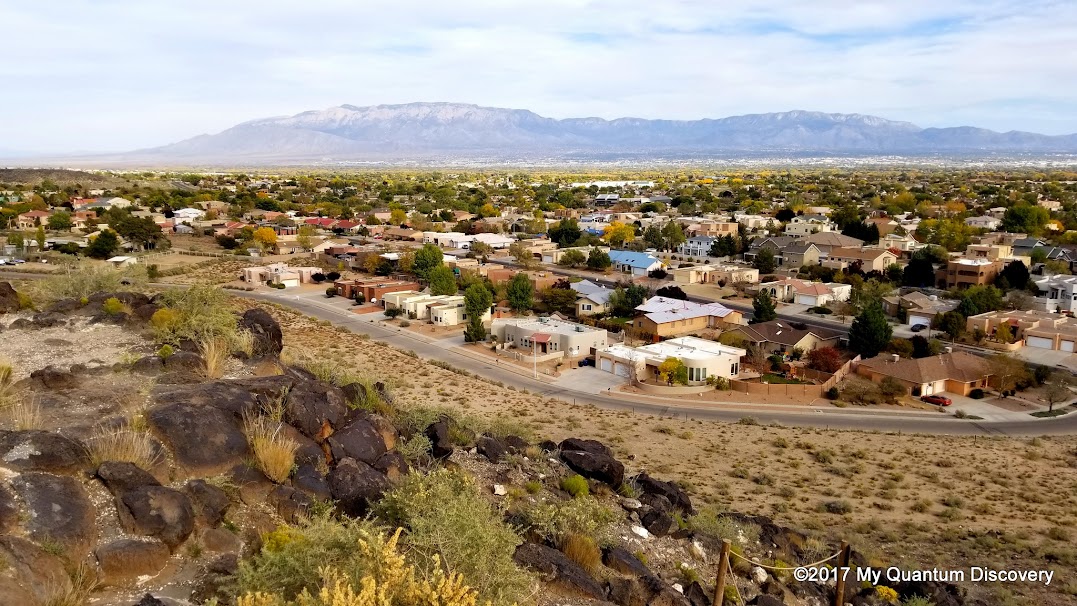 That night we prepared for our departure the next morning, heading for a state park in Arizona.