Nestled in the Southern Colorado foothills of the Culebra Range of the Sangre de Cristo (Spanish for Blood of Christ) Mountains is the 2700 acre Trinidad Lake State Park where we would spend the next seven days at one of the two campgrounds in the park, the Carpios Ridge Campground (review coming). Sadly, this would be our final stop in the beautiful state of Colorado, but this has to be one of our favorite State Parks!

Although the U. S. Army Corps of Engineers (COE) built the dam that created the 800 acre Trinidad Lake as an irrigation and flood control project in 1978, the park has been managed by the Colorado State Parks since 1980. 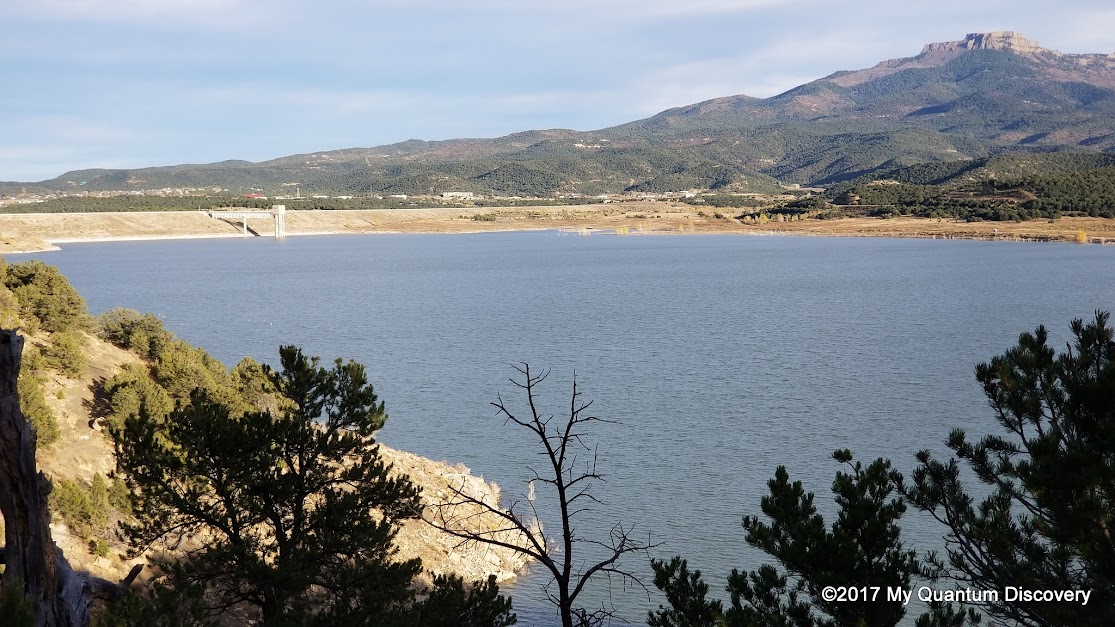 With easy access from our campsite to several miles of trails, once we settled in, we were eagerly looking forward to hiking on the moderate one-mile Levsa Canyon self guided nature trail. With its varied terrain and lovely views of the very prominent basalt capped Fisher’s Peak, which at 9633 feet is the highest summit of Raton Mesa in the Rocky Mountains and other mountains, the lake, and the wooded cove, it was quite enjoyable, a perfect trail for stretching our legs. 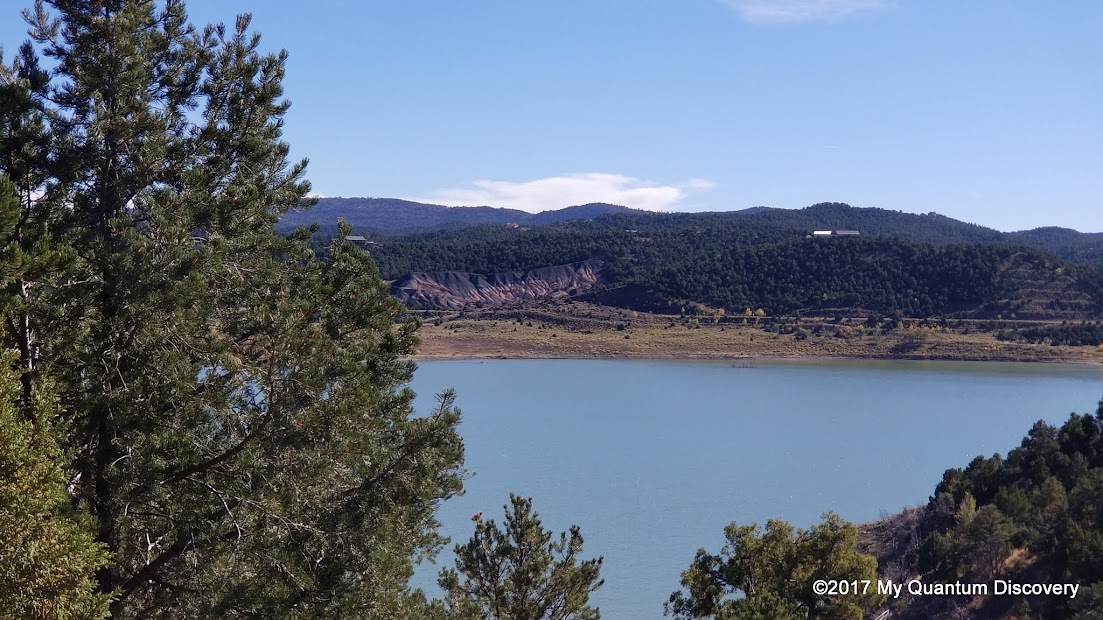 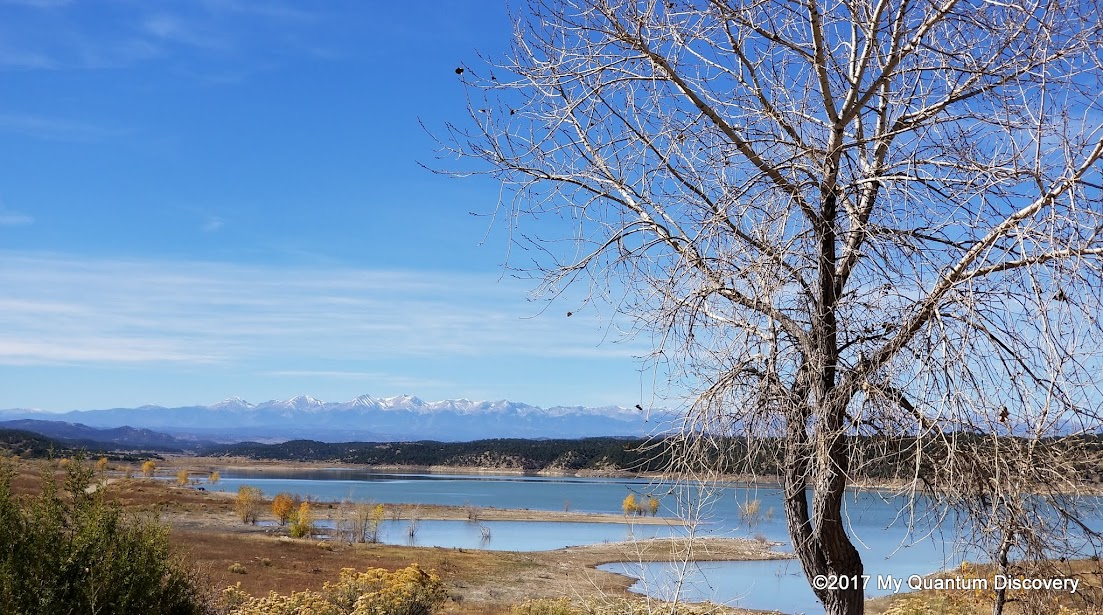 The next morning, wanting to explore the nearby city of Trinidad, we headed to the downtown area. Before coming here, I’ll admit that we didn’t know much about Trinidad and its history. Such well known names of people who once lived here: Bat Masterson, the town marshal in 1882, Doc Holiday, a dentist and owner of a brothel and Wyatt Earp, a faro card game dealer at Masterson’s saloon, immediately conjured up images of the Wild West.

As we drove down the streets that were lined with the facades of classic old Victorian buildings which we later learned were heavily influenced by the Italian roots of early settlers, it was obvious that Trinidad has successfully been able to retain its historical character and charm. Equally impressive were the 6.5 miles of brick-paved streets, streets that date back to 1910 when the Trinidad Brick and Tile Works began firing bricks. What made it even more unique was that each brick was stamped “TRINIDAD“.

The city was voted one of the top ten most beautiful cities in Colorado by this national architecture website in 2015 which states “it’s designated as a Colorado Creative District due to its vibrant art scene as the area has attracted talent, including plein air artists, for years”. According to that article, “it is a art aficionado and artist’s haven”. Evidence of their creativity is found at Artocade, an Art Car Festival held in September – check out these pictures (especially the Pig Art Car). Darn, we missed it! Based on that and the info presented in this article by Colorado Magazine perhaps we should have stayed longer to explore more of the city! 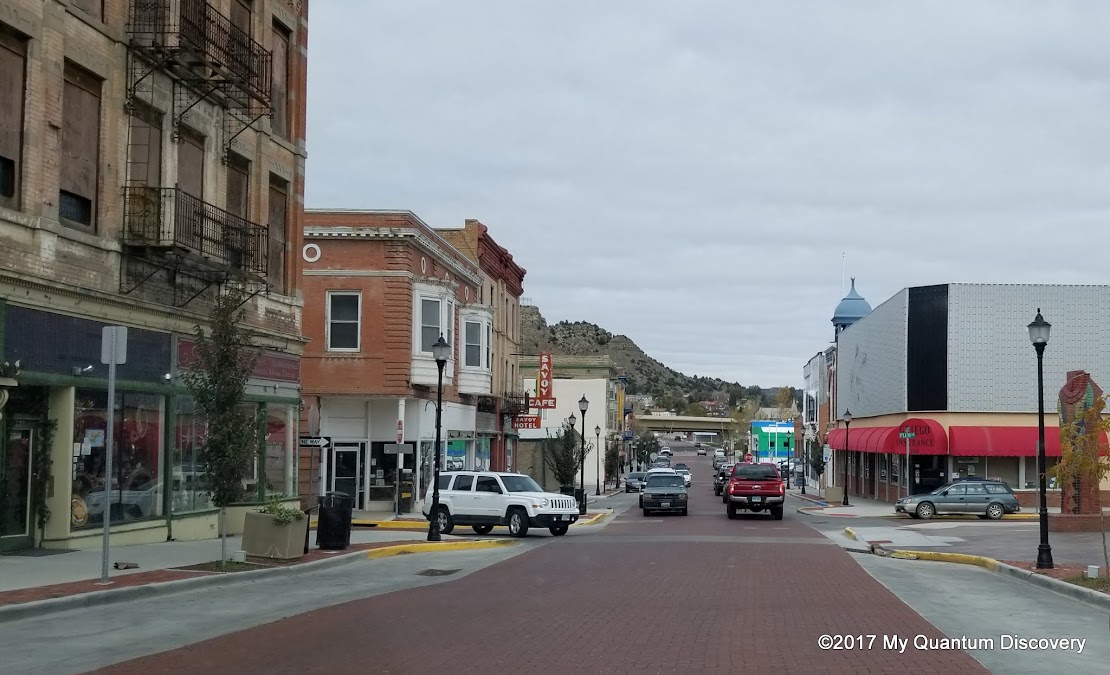 To us, the overall vibe here was one of transition, a city in flux, trying to merge the old with the new. Once a booming coal mining town, Will Rogers once wrote after a 1935 visit that “Trinidad, Colorado, has enough coal to melt the North Pole till it runs.” Who knows maybe he was right! In its heyday, the population was 30,000. But as the mines shut down in the late 1940’s and businesses closed, those old Victorian buildings became empty store fronts. By 2016, the population had dwindled to 8,200 residents.The city faced a major economic slump. 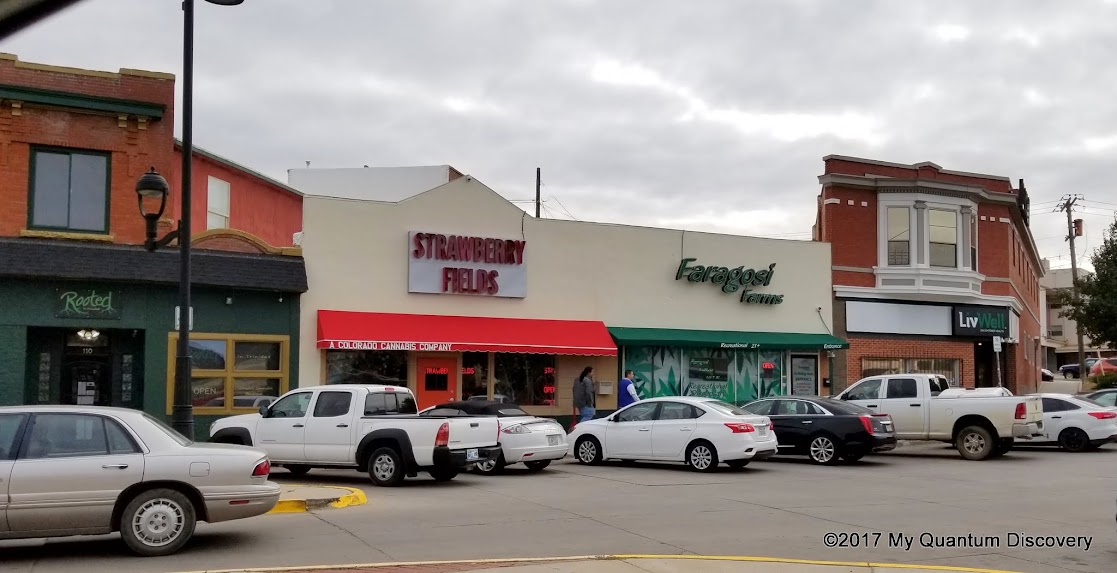 Strange is the only word I can think of to describe the feeling we had seeing cannabis dispensaries standing alongside or even occupying the historic buildings. Yes, we had seen dispensaries in other Colorado towns but they were usually someplace more mundane like a strip mall. But it was different here, many of the dispensaries lined the streets downtown (notably there were others on the south end of town right next to the interstate – and the New Mexico border). It almost seemed like every other storefront was a dispensary, in fact we counted 22 in the area. Yet oddly there is only one McDonalds in town!

According to this interesting CNN article titled “Did pot money save small town from ‘abyss of nothingness’?”, the advent of recreational and medical marijuana in Colorado has caused a positive transformation to the city, “thanks to at least $800,000 in marijuana tax revenue”.  Although it hasn’t been without some controversy, the advent of these dispensaries in 2016 has attracted tourists, many of whom are 70+ years in age from Texas, New Mexico, Oklahoma and Arizona seeking it for both medicinal and recreational use. Wonder what will happen to the spike in Trinidad tourism if/when those states legalize marijuana? 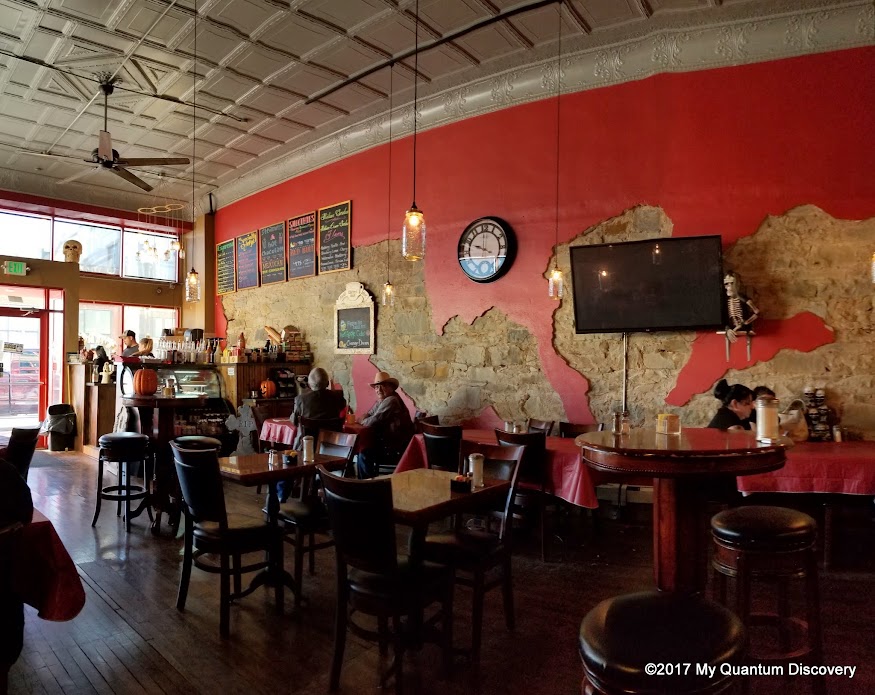 It should also be noted that while Cannabis is perfectly legal within Colorado, it is completely illegal to transport it across state lines, not to mention that it is illegal in all of the surrounding states, at least so far. Having observed what appeared to be undercover law enforcement at the border watching the dispensaries there, all we can say is be careful.

After a decent breakfast at Cafe What A Grind, we left the downtown area and headed to the very small and historic town of Cokedale (population 140), a former coal mining town named after the nearby rows of coke ovens, placed on the National Historic Register in 1984. 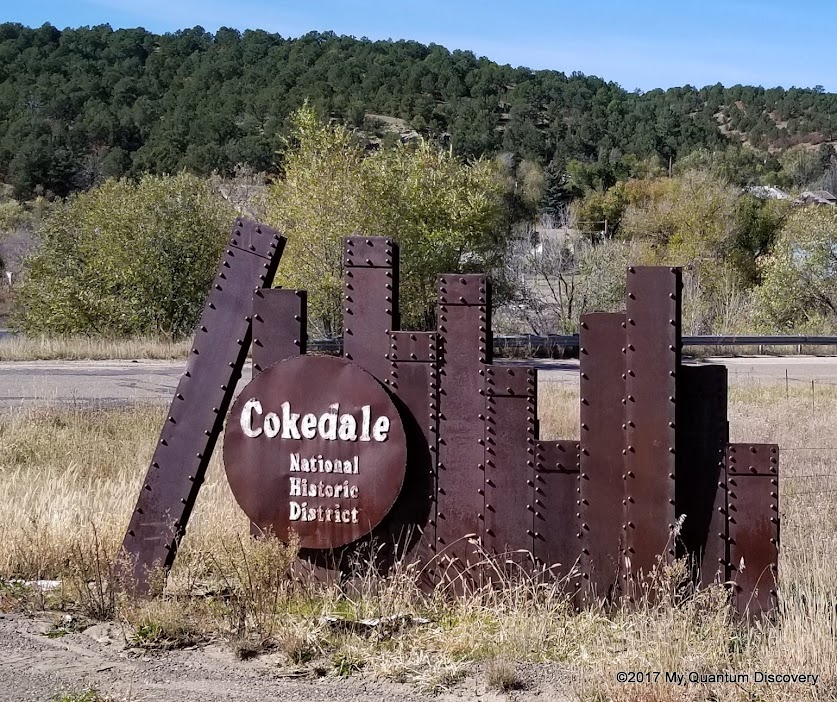 At the intersection of CO-12 and County Road 57.7 was a historic marker about Cokedale alongside a memorial plaque which pays a tribute to all the men, women and children who worked in the coal mines. Nearby the landscape was dotted with huge black mountains which were slag piles of the leftover impurities washed out of the coal.  According to the Western Mining website, “by 1909, Cokedale had a population of 1,500. Each day it’s #1 mine produced 1,500 tons of coal and its 350 coke ovens produced 800 tons of coke. Mining operations at Cokedale continued for 40 years and produced over a million tons of coal.” In 1947 when the demand for coal and coke dwindled, the mines closed and the ovens ceased operating.

Speaking of the coal mines, located 18 miles northwest of Trinidad, Colorado, is what is now the ghost town of Ludlow. Although we didn’t have time to visit the town, it is interesting to note that the tragic events there signaled a violent turning point in US labor relations. This town was the site of the Ludlow Massacre, an attack by the Colorado National Guard and Colorado Fuel & Iron Company camp guards on a tent colony of 1,200 striking coal miners and their families on April 20, 1914. About two dozen people, including miners’ wives and children, were killed. John D. Rockefeller, Jr., who was the chief owner of the mine, was widely criticized for the incident. A report, published in 1915 after an investigation was influential in promoting child labor laws and an eight-hour work day. The United Mine Workers of America erected a granite monument in memory of the miners and their families who died that day. 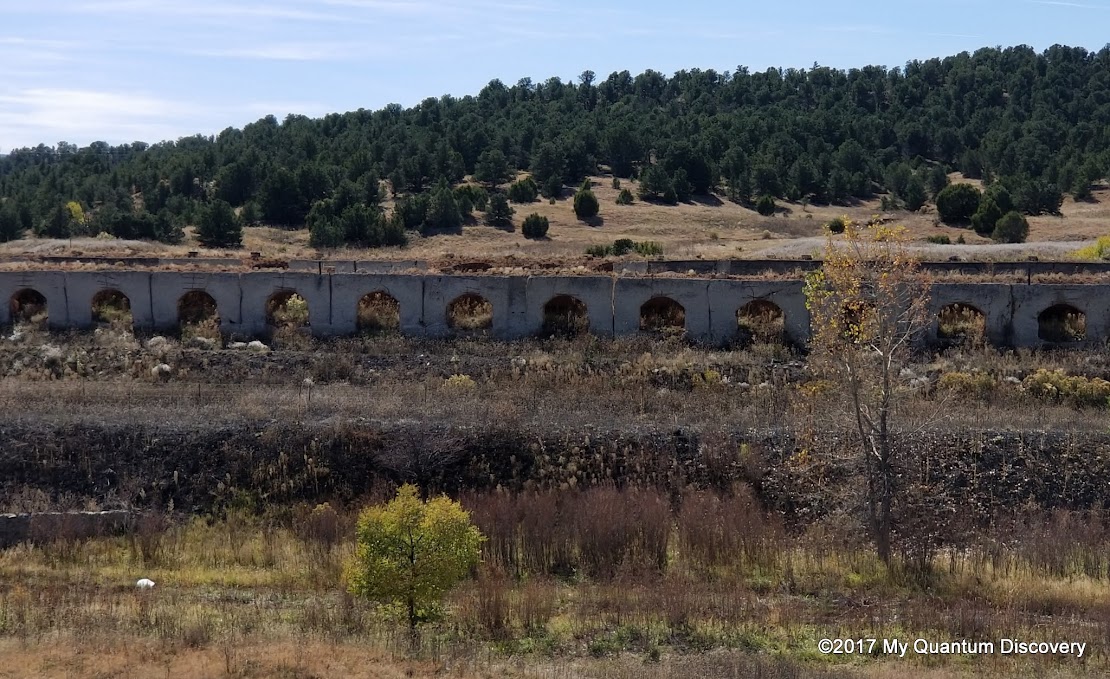 Looking towards the opposite side of CO-12, off in the distance were the remains of the coke ovens, looking almost reminiscent of Roman ruins. By using very high temperatures, these ovens which consisted of a heating chamber, a coking chamber and a regenerative chamber, were used to remove the sulfur, phosphorous and moisture from the coal resulting in ‘coke’. Since the coke burns at intense heat, it was a necessary ingredient in the smelting of iron. Can’t imagine what it must have been like working near these ovens, particularly after reading about the sulphur smelling stench that would engulf the town.

On a side trip down a dirt county road, we had picturesque views of the lake and the dam. Rob and I chuckled at a sign that said “Caution, Lake Ahead, Prepare to Stop”. Huh? Do we really need a sign to tell us not to take our car for a swim? 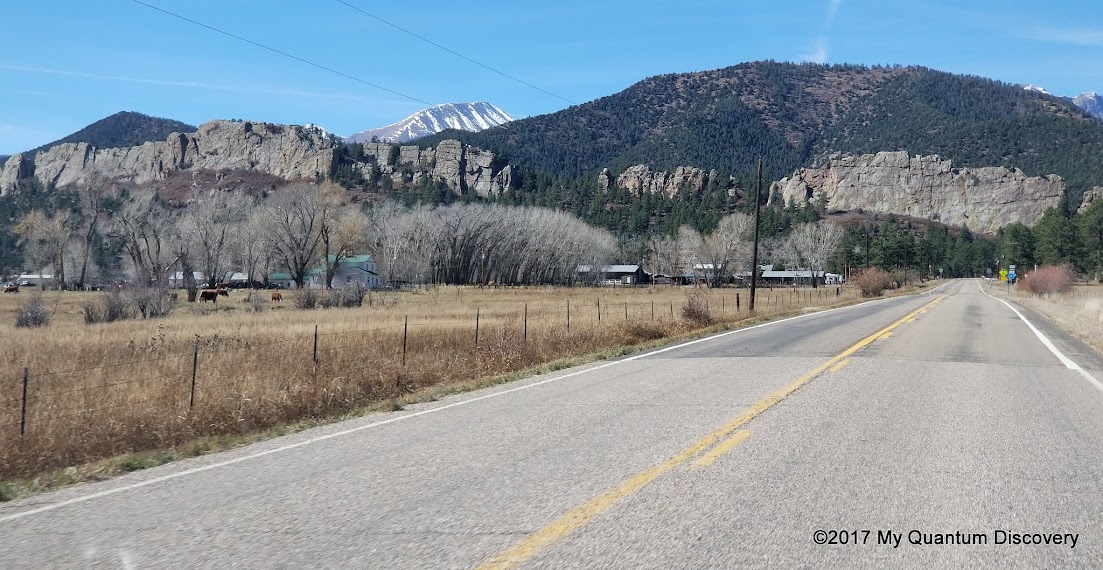 Returning to CO-12 also known as Colorado’s Highway of Legends, the road paralleled the Purgatorie River, named by French trappers to commemorate Spanish explorers killed in a Native American attack. Passing through the small town of Stonewall, we had views of the Dakota Sandstone walls that rise 250 feet above the surrounding area. From here the highway turned northward, passing by Monument Lake Park and North Lake.

The highway continued past North Lake and continued climbing almost steadily to
Cuchara Pass to an elevation of 9,995 feet. Bordered by the San Isabel Forest is the tiny town of Chuchara (which is Spanish for spoon), which looks reminiscent of what a turn of the century Colorado mountain town might have looked like. Quite a surprise to learn later that this tiny town is the home of Timbers, a fine dining restaurant! What a cute little town! 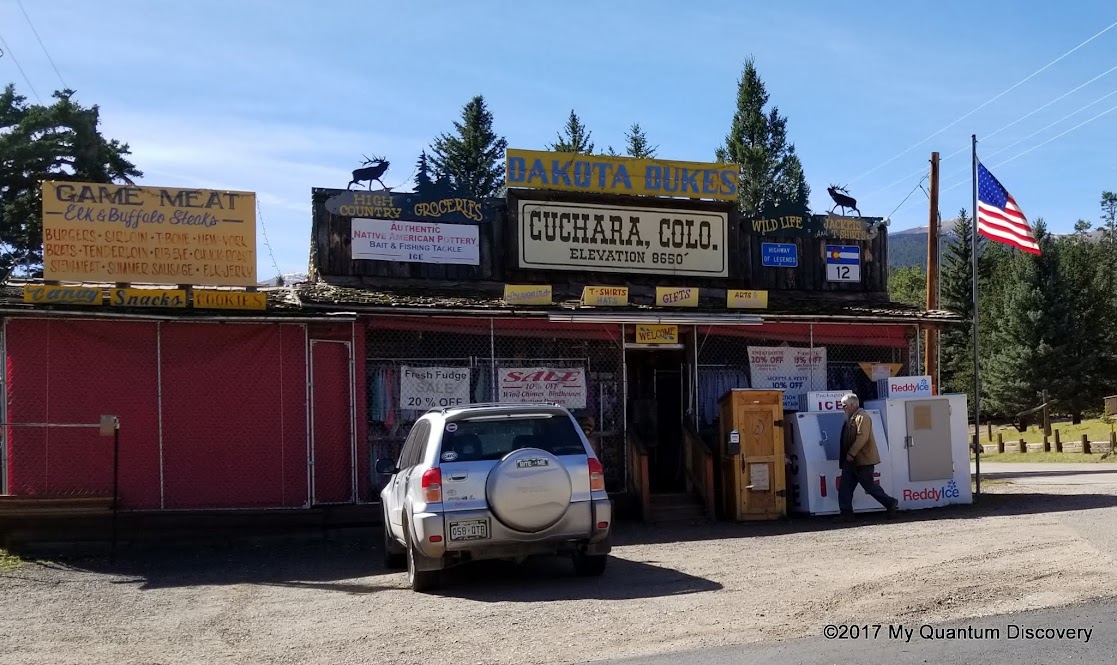 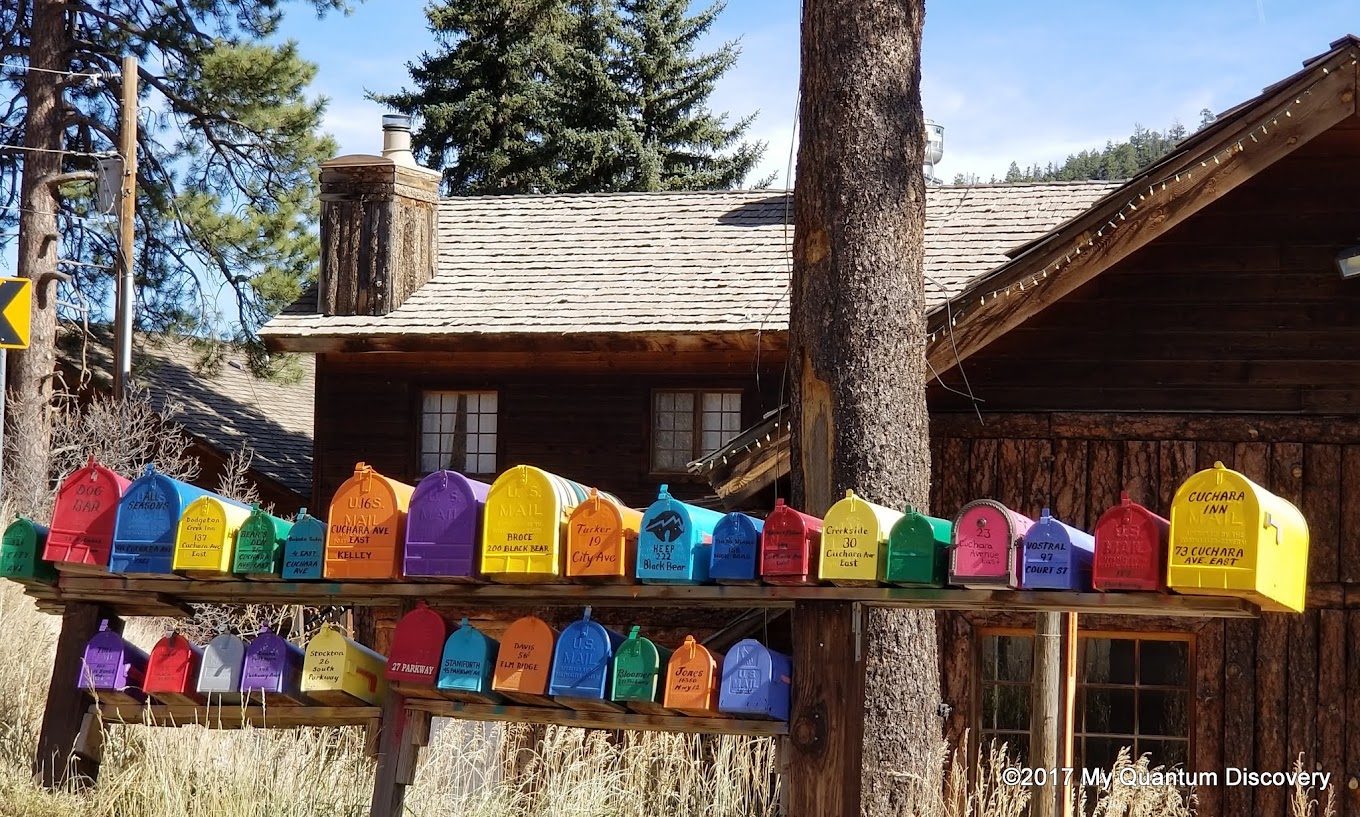 Continuing on, we passed by the Devil’s Staircase, one of the 400 geological dikes that radiate out from the West Spanish Peak like spokes on a wheel. According to this website,  “this is where the ancient legend of the Devil’s Stairs was born. Long ago, the Devil came out from hell to survey the world, choosing the Cuchara Valley as his entrance. He would climb the steps and sit on the twin mountains, plotting how to make it his. God learned of this, and noticing the beauty of the mountains and valley, took it as his own. He forbade the Devil to ever enter the area again, but the Devil’s steps still stand.” 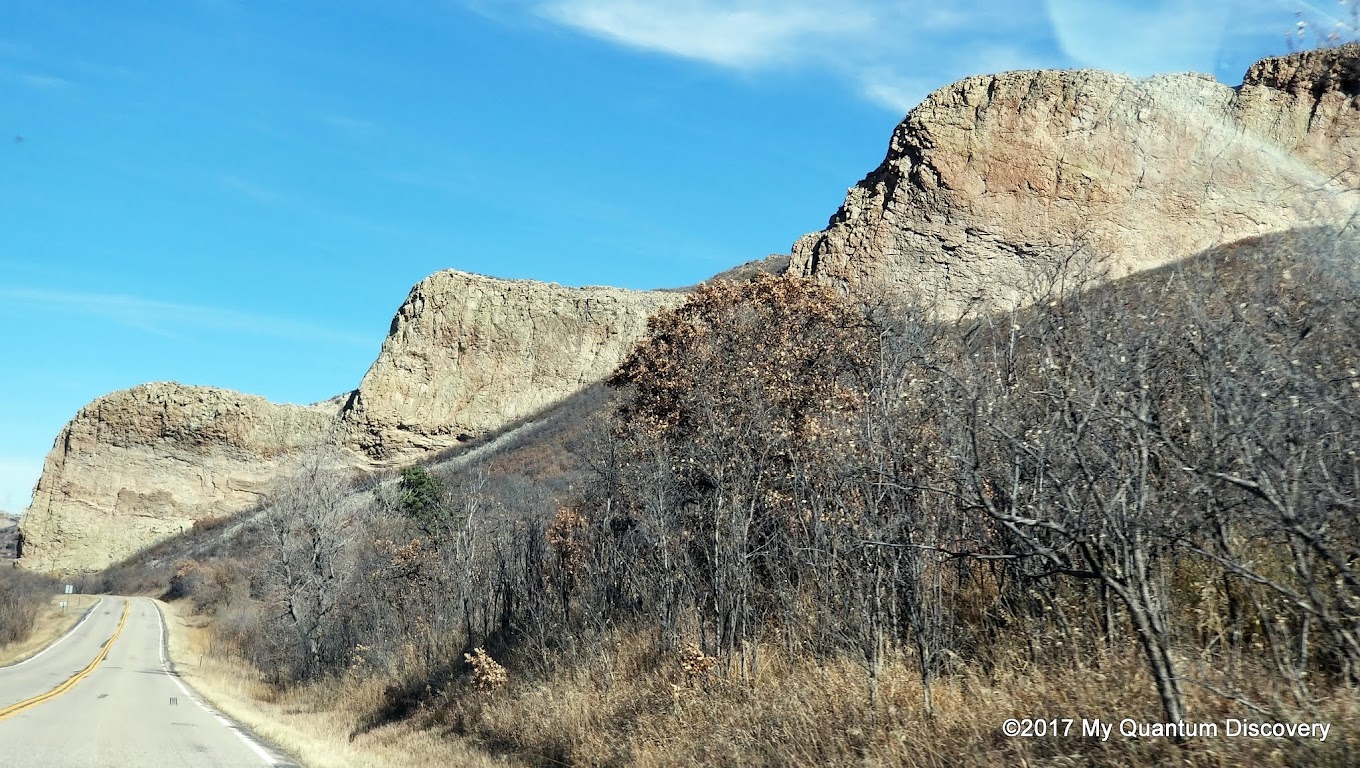 Past the town of Walsenberg, we finally left the Highway of Legends as we turned onto I-25 taking the more direct faster route back to our temporary home at Trinidad Lake State Park. From the highway, we had beautiful views of the West Spanish Peak (13,631 ft) and East Spanish Peak (12,688 ft). 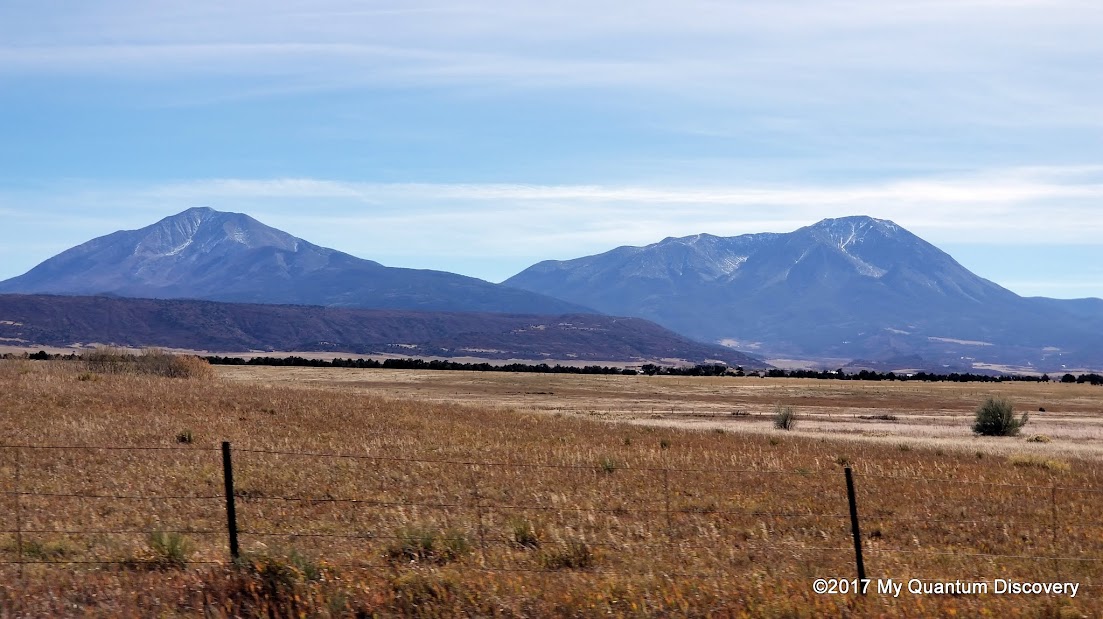 Sadly the next day we would say goodbye to Colorado and continue heading west. There was a lot of the state that we didn’t get to see because of weather concerns. But based on what we saw, we totally love this state. We will return! 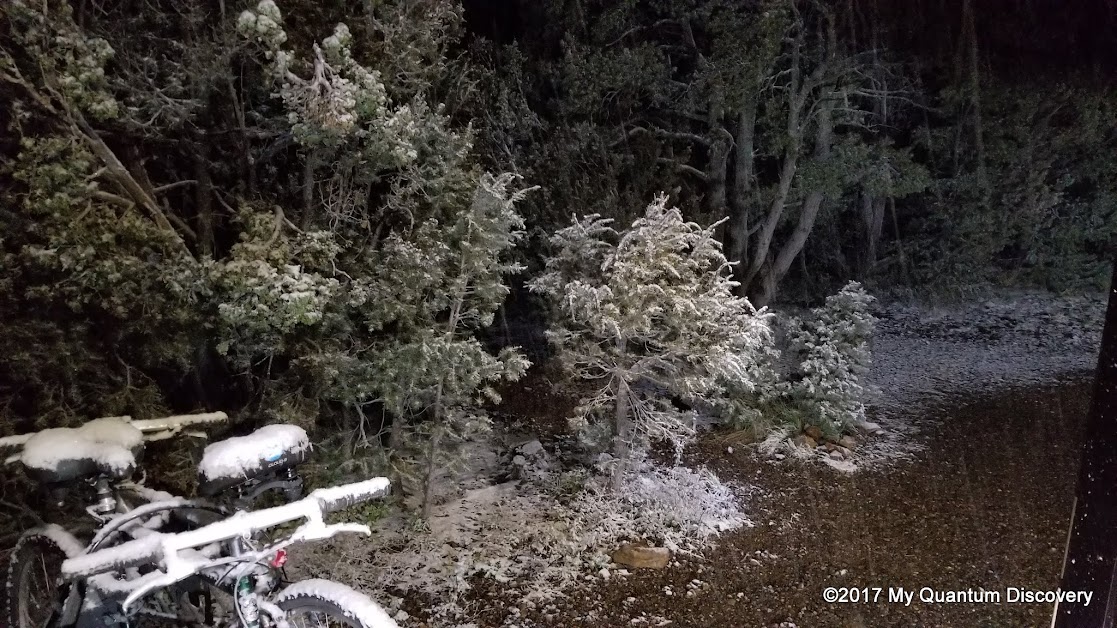