Note that photo captions are not displayed in the email version of our posts, for a more complete viewing experience, click the post title to view it directly on our blogsite.

A quick hop, skip and jump from Ortona South Campground took us to Riverbend, arriving there mid-morning on Thursday, March 11th. Although we thoroughly enjoyed our few months of wandering in Florida and Alabama and catching up with family and friends, it was nice to be back “home”. Everything (including our new plants) looked great. 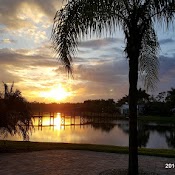 It didn’t take long to get back in the groove here although overall our stay here was pretty low key, not doing much of anything except getting together with a few of our friends. Yours truly got back in a consistent routine of morning walks while Rob did some high speed bike rides around the resort. Each day we would see several coaches leave, beginning their journey home for the Easter holiday or to other more northern destinations. Despite the fact that the resort was starting to empty, the activities calendar was still full of daily and weekly events. Things will really wind down the first weekend in April.

We heard that it was a booming season with January, February and March totally booked and with a wait list. That’s good news especially when we had heard concerns back in December that the recent rate hikes might have an impact on the rentals. Not only were the rentals rocketing but lot sales were also on the upswing with the values climbing considerably since last year. 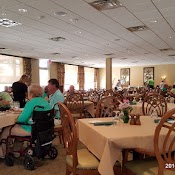 Once again, we were invited by our very good friends, Chris and Bob who live at Heron’s Glen in North Fort Myers, to join them for a St. Patty’s Day Corned Beef and Cabbage buffet at the Heron’s Nest Restaurant. 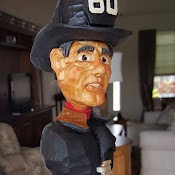 I’m not a big corned beef fan but this was really good, probably the best we’ve ever had – very tender and flavorful. Note this restaurant is part of the golf course and is open to the public.

Back at their house, Bob showed us several of his latest wood carvings.The detail in both pieces is incredible! Such talent! The photo on the right shows a cane that he was commissioned to carve to be given as a gift to a retiring member of the Fort 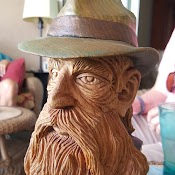 Myers Police Department. The photo on the left was carved based on an actual photo of a moonshiner. Bob is a member of a group of artists at Wild Child Art Gallery in Matlacha. Want to see more of his carvings? Go to his specific page on their website to see what other interesting carvings he has mastered.

Just prior to our departure from Riverbend, we had breakfast with them at our favorite breakfast place, the Alva Diner. Can’t beat the portions, the prices and the service. 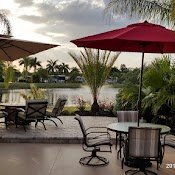 Back at the ranch, our site improvements continued. In an effort to create some much needed shade against the very strong and very hot afternoon sun, we purchased a 10.5′ x 10.5′ cantilever umbrella which we bought at Sam’s Club.  It tilts in varying degrees and can be swung from side to side making it relatively easy to block the sun. Love that shade! 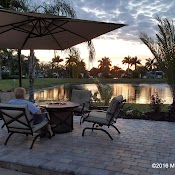 But we weren’t done yet. We hadn’t planned on buying anything else but one day we stopped at a local Big Lots to look at a market umbrella to use with our round table and chairs. On display was a 43″ round gas fire pit with four cushioned chairs which could be bought together or separately. After much debate, we decided to buy the entire set, thinking it would make a nice addition to our patio living area. Fortunately it fit in the van so getting it home was no problem.

Drats! We were almost done with setting it up when we noticed some damage to the top of the fire pit and also found that the door which opens for the propane tank was off kilter. We called Big Lots and they did have another one so Rob had to 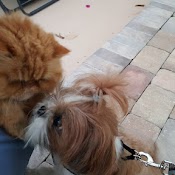 pack everything up so we could return it the next morning. Better success with the second one. We enjoyed it that night with our neighbors, Bobbie and John and their very cute pooch, Ellie, then a front moved in, creating very unsettled weather with lots of showers and very hot and humid temps. Not conducive to sitting outside in front of a fire for sure!

Eating out? Nope we didn’t do much of that either. A few breakfasts at the Alva Diner and a take out bucket of their delicious Broaster chicken the night before we left. We also enjoyed breakfast a few times at Mel’s Diner in Fort Myers and one 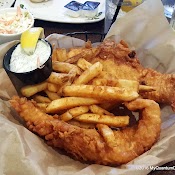 night we had dinner at Forrey Grill in downtown Labelle with Rick and Joyce, workcampers who have manned the 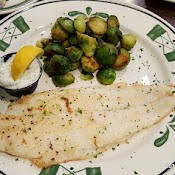 office at Riverbend for several years. Look at my healthy meal – grilled white fish with Brussels sprouts, Rob had fish (fried whitefish) and chips. My fish came with the salad bar. Good meal with enjoyable company!

Speaking of healthy eating, we discovered Ritchey’s Produce Stand 11 miles west of Riverbend on FL-80. The owner, Robert Ritchey is a fourth generation farmer who is known not just for his delicious tomatoes, but also his sweet 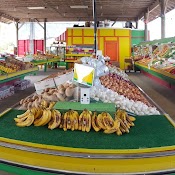 onions, citrus, squash, fresh salsa, guacamole and more. Each time we stopped there, he was lovingly wiping each individual tomato with gloved hands before putting it on the display. He was telling us that a lot of rain made planting in his clay soil very difficult plus higher than normal temps has made for a difficult growing season. Any produce that they don’t grow right there is brought in from Homestead, Plant City, Immokalee and other Florida growing areas. We’re sure going to miss all that fresh produce when we leave, especially the yummy vine ripened local tomatoes. It will be several months before we have local garden grown veggies in New England. 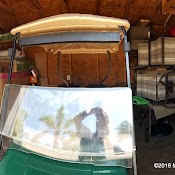 As we readied for our departure from Riverbend on April 1st, we commented how much simpler things were as renters where we could just up and leave. Now it takes us a full day putting the golf cart and all the furniture away (per HOA rules, nothing can be left outside due to the potential threat of hurricanes/tornadoes), washing the pad, etc.

Weather wise our stay here was a mixed bag. At the beginning we had very comfortable temps but during this past week it’s been pretty steamy here with temps in the high 80’s. I have to admit that I am looking forward to heading north to the cooler temperatures.

We’re heading back to Entegra in Middlebury for a service appointment on April 11 to fix a few minor things. Also we plan to attend the Entegra Springfest, a gala event to show off their 2017 models. Stay tuned for the details of our journey!