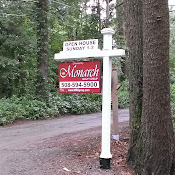 …because we already have a great offer and have accepted it!

We signed the listing papers and our agent took pictures of the house late Wednesday morning (if you want to see the listing those of you that know where we live just search on our address, otherwise email us for a link). Our listing went live on the MLS Wednesday afternoon at about 4PM. Our agent figured we would probably not have any inquiries until Friday or Saturday due to the timing of the listing. Well by 8:45 the next morning (Thursday) we already had two showings scheduled for 3:00 PM and 4:30 PM!

Yikes! The planned open house was not until Sunday and we were planning on Thu/Fri/Sat to finish up some smaller projects and straighten out some remaining clutter in the basement and garage. So this put us into a semi-panicked overdrive!

We managed to get things in reasonable order and after chatting with our agent Ruth who arrived early, we went out to the coach to hang out during the showings. The first folks (who had a young baby) stayed for almost an hour. We were surprised someone with a young child would even come look at our house as it isn’t a great set-up for that situation. Even so they indicated they would be back for the open house.

Meanwhile we get yet another request for a showing at 6:30! Wow – 3 showings within 24 hours of being listed. By the way our agent subscribes to a system called MAPASS (pronounced mass-pass, not map-ass) which coordinates showings between listing agent, buyers agent and homeowner via text, phone and email – what a time saver for everyone!

The 4:30 looker arrived and also stayed for quite a while. This looker was the female half of a couple and it turns out they also had two children. Hmmm, once again that two bedroom thing – guess they had no issues with doing some renovations. After they left we had less than an hour until the 6:30 appointment so we decided we better run out and get some take-out for dinner. When we got back to the house, the realtor and lookers from the 4:30 showing were back in our driveway. The agent said they wanted to give the husband a look at the exterior (he was in the car) and were coming back at 7:00 so he could get a look inside. OK, very interesting!

We woofed down our dinner (subs) and shortly thereafter the 6:30 agent and her lookers arrived ahead of our agent so we chatted with them for a bit. Turns out one of them previously worked at Normandy Farms (a local campground) and was very appreciative of our coach. They are an engaged young professional couple with no children so are potentially a good fit for the house. When our agent arrived a few minutes later we headed back aboard the bus to wait it out.

So the 6:30 lookers stayed until almost 8:00 and the 4:30 second showing folks (who came back at 7:00) also did not leave until about the same time. It was a bit crowded in there for a while, not to mention all the vehicles in the driveway!

During the showings, we of course are assessing the lookers and forming opinions as to which would be the best for our house – this is why RE agents don’t want the sellers around during showings! Nevertheless, we do have a clear favorite out of the three.

When we got back inside the house Ruth was waiting for us and indicated we would probably be getting some offers the next day. Really? At this point it has only been about 28 hours since our listing went live!

Turns out that the first offer was submitted at 8:00 PM Thursday evening (must have written it up while in our driveway!) but we did not see it until Friday morning around 11:00. That’s just 28 hours on the market to first offer! This offer is from the young engaged couple (who happen to be our top pick) and is OVER the asking price! Not by a lot, but we never expected such a quick offer and certainly not for the asking price! Best of all there are no contingencies to sell an existing home and are already pre-approved for the loan. The only requirements are a home inspection, insect, radon and water tests. Closing will be late September or thereabouts.

A second offer was allegedly pending from the 4:30 lookers with two children but we learned later they decided to hold off because they were considering an expansion project and our nearby wetlands may have been an issue.

Because the first offer was just about as good as it gets in regard to terms, dates and buyer eligibility we quickly decided to just go ahead with it and by 1:00 Friday it was a done deal.

We decided to cancel the open house out of common courtesy to potential buyers who would be looking at a house already under agreement – most view that as a waste of their time and rightly so, but also to take the pressure off for us. If something falls thru with the accepted agreement down the road we can just pick up where we left off and start again.

So wow, 28 hours, but there are still a few more hurdles to get by and we know it ain’t over til it’s over. Still I guess our hard work paid off and serendipity of course played a large role too (my father would call it divine intervention) – we always knew that it would take the “right” buyer for our house to sell, so it’s kind of amazing that just the right couple was ready to buy at just the time that we were finally ready to sell.