It was with very mixed emotions that we left Rancho California on the morning of March 1st, sad to be leaving our friends behind but eager to be on the move again after a three month stay. Our first stop would be Yuma, Arizona. Why Yuma? Well one, we had never been there before and two, we wanted to try the route east via I-8 instead of the oft traveled I-10. (Hint: we liked both!) 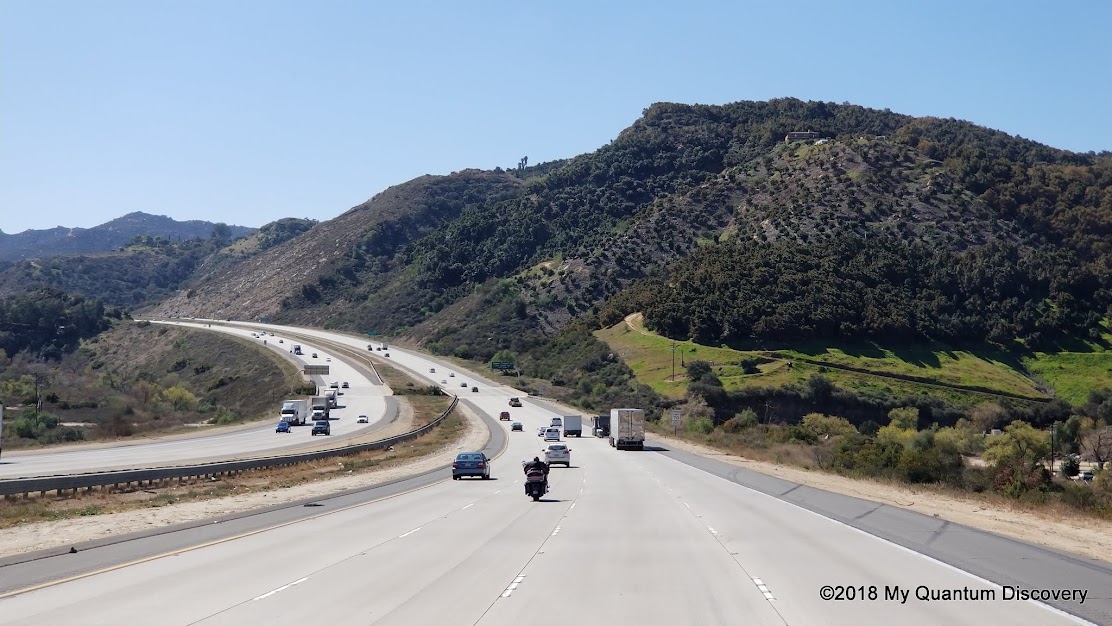 It was a lovely day, perfect for traveling. Our route would take us south on I-15 to CA-52 East (to avoid San Diego traffic) to CA-67 South to I-8 East. At the higher elevations of 4000′ along I-8, there was snow on the ground from a storm that had come through a few days earlier. Good thing we were on the move as more snow was in the forecast for southern California that night. A day later, the roads might have been impassable! 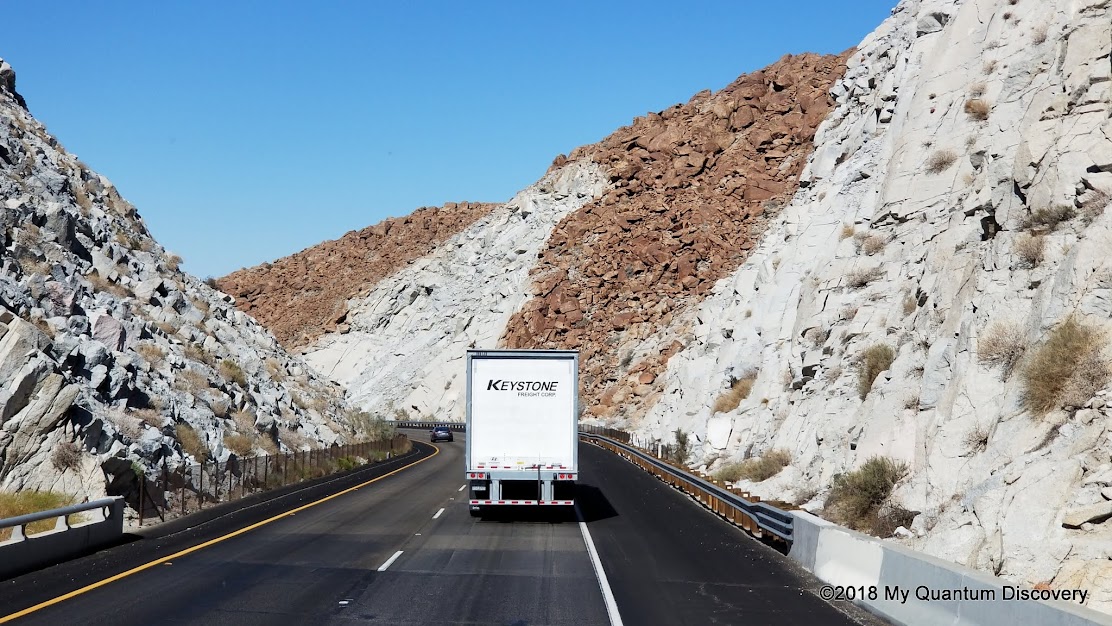 Sometimes driving major highways especially interstates can be quite boring but not so on this particular day. On I-8, otherwise known as Kumeyaay Highway, the landscape changed quite dramatically from the lower elevations with hills dotted with green shrubs to a very rocky terrain with gorgeous scenery and a winding roadway as we ascended to over 4000 feet in the passes. Runaway truck ramps and signs warning us of a 6% steep grade indicated that we would be descending to lower elevations. At those lower elevations, we would once again be surrounded by the desert with little more than sand, tumbleweeds and a little shrubbery. 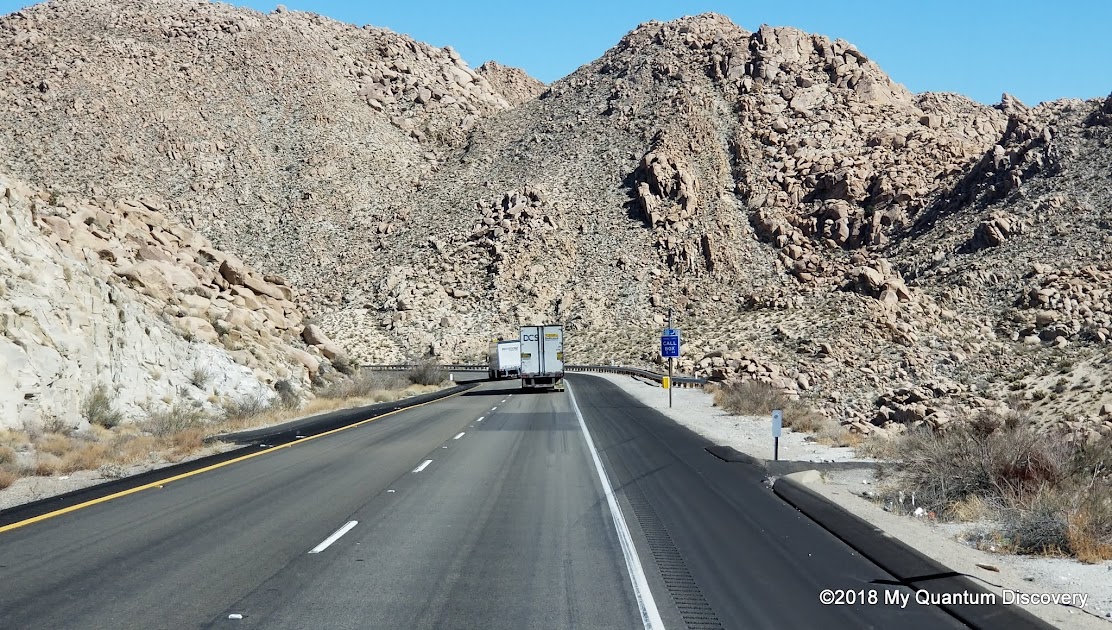 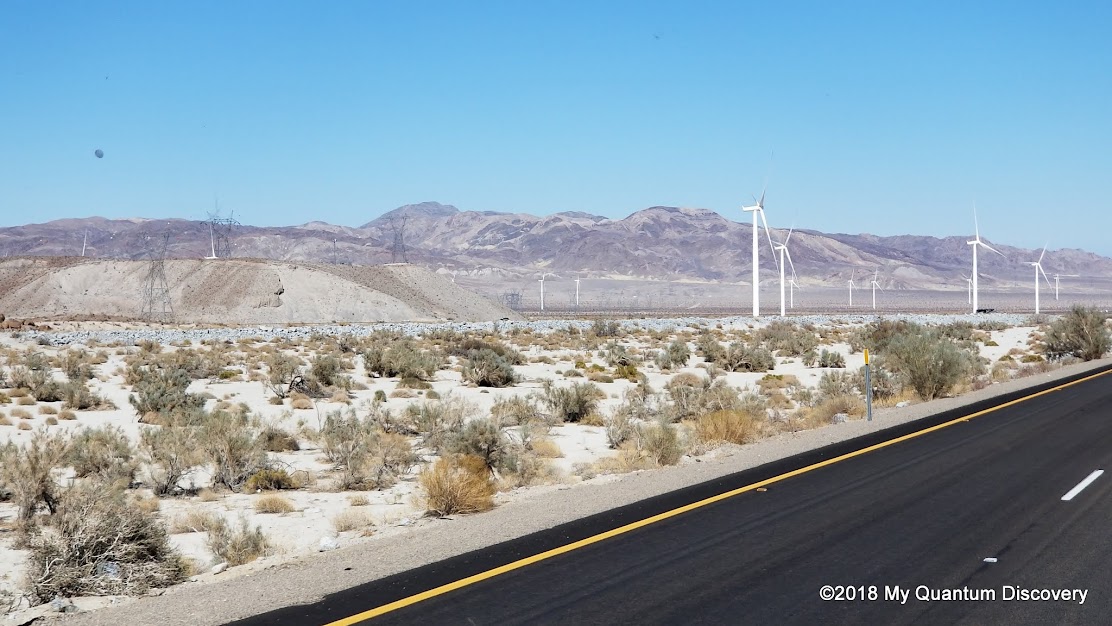 When we stopped at a rest stop in El Centro, we could hear a loud noise overhead. Wow, were those dots in the sky the Blue Angels? Yep, that’s what they were and we were treated to a free show! Normally based in Pensacola, it turns out that their winter home is here at the El Centro Naval Air Facility in California where they practice for the upcoming show season. 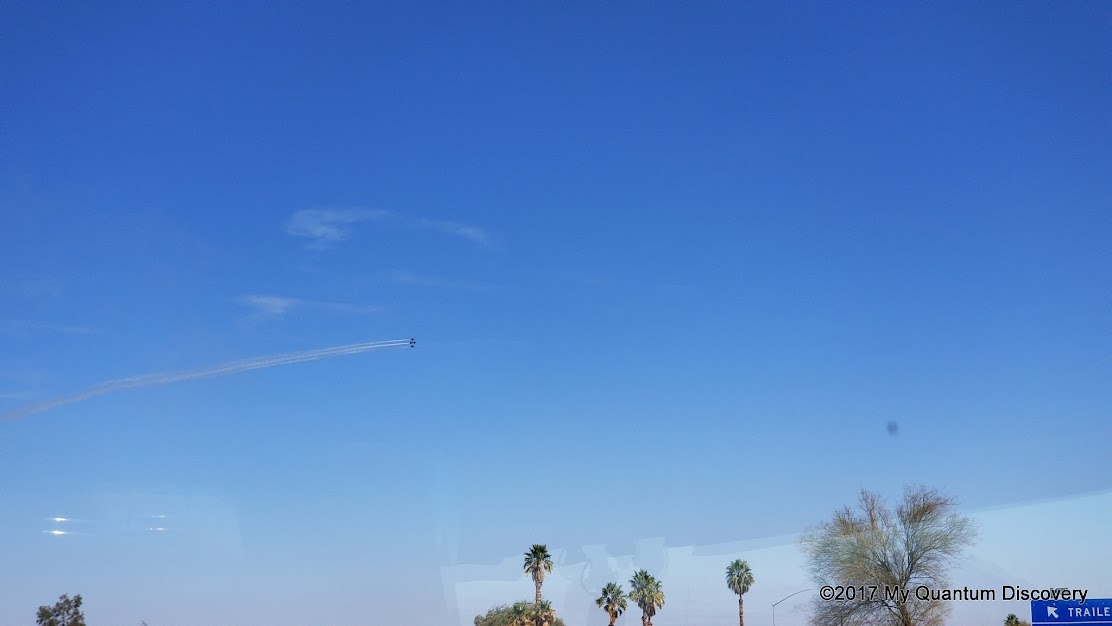 Between El Centro and Yuma is what is known as the Imperial Valley which is a major source of winter fruits and vegetables, cotton, alfalfa and grain for U.S. and international markets. Everywhere we looked the desert had been replaced with miles of crops, especially lettuce, growing in the fields. 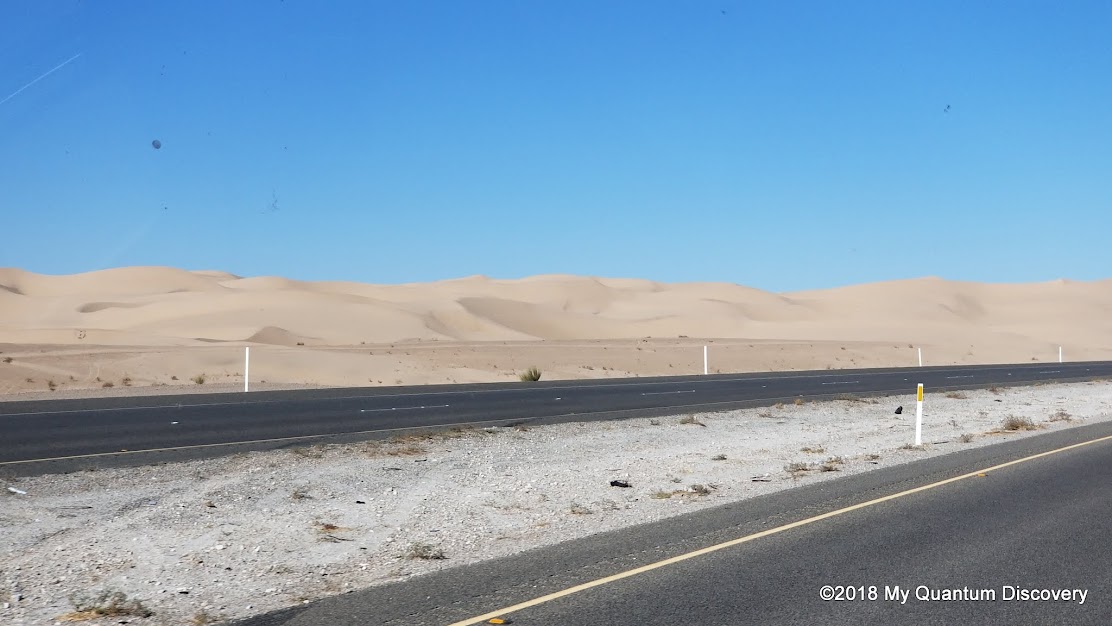 Then suddenly the green crops were replaced by the Imperial Sand Dunes, sometimes called the Algodones Dunes. These dunes are the highest in California rising in height to over 300′ and extending for more than 40 miles along the eastern edge of the Imperial Valley agricultural region in a band averaging five miles in width. This is a very popular recreational area for dune buggies. Besides being a popular recreational site, the dunes have been used as a film set for such films as Road to Morocco, Flight of the Phoenix, Tobruk, Stargate and Star Wars: Return of the Jedi. How cool is that?

Darn, as we neared Yuma, traffic slowed down to a crawl. A semi tractor trailer truck had overturned in a construction zone on the highway earlier in the day. Since I-8 is the only road into Yuma, there was no way around it. Oh well, what’s another 30 minutes or so added to our four hour drive! 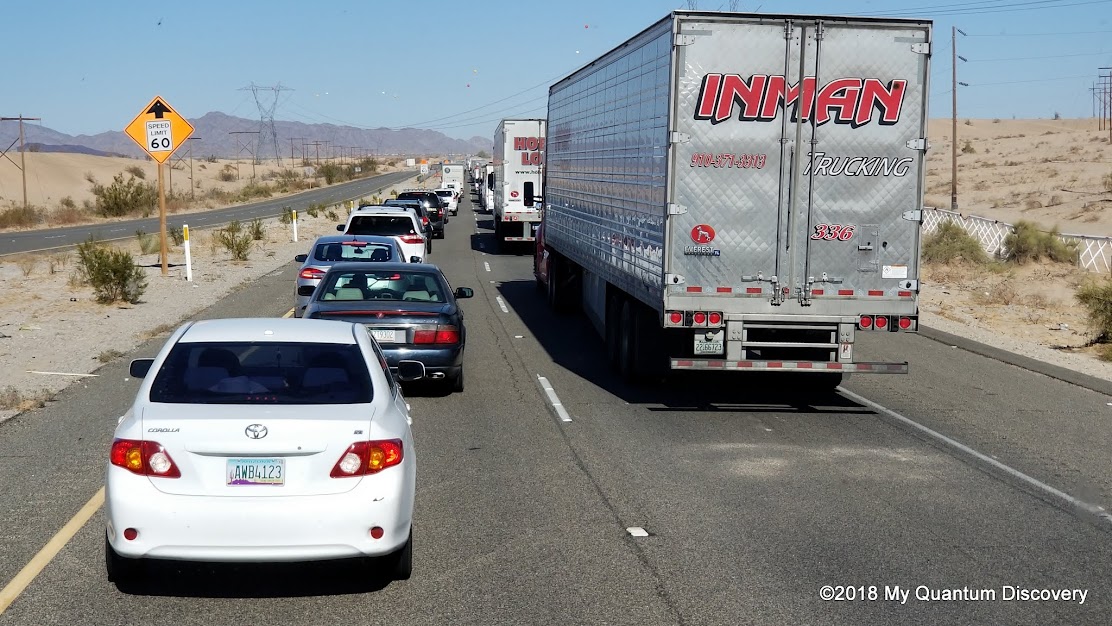 Finally we arrived at the 55+ Carefree Village Resort (review coming) which would be our home base for three nights. Very nice resort with full hookups, wide sites and lots of amenities including a four lane bowling alley, swimming pools and hot tub, a miniature golf course, 8 pickleball courts, horseshoes, volleyball, shuffleboard, tennis, fitness center and bocce ball. They even have a breakfast buffet on Saturday mornings ($5). 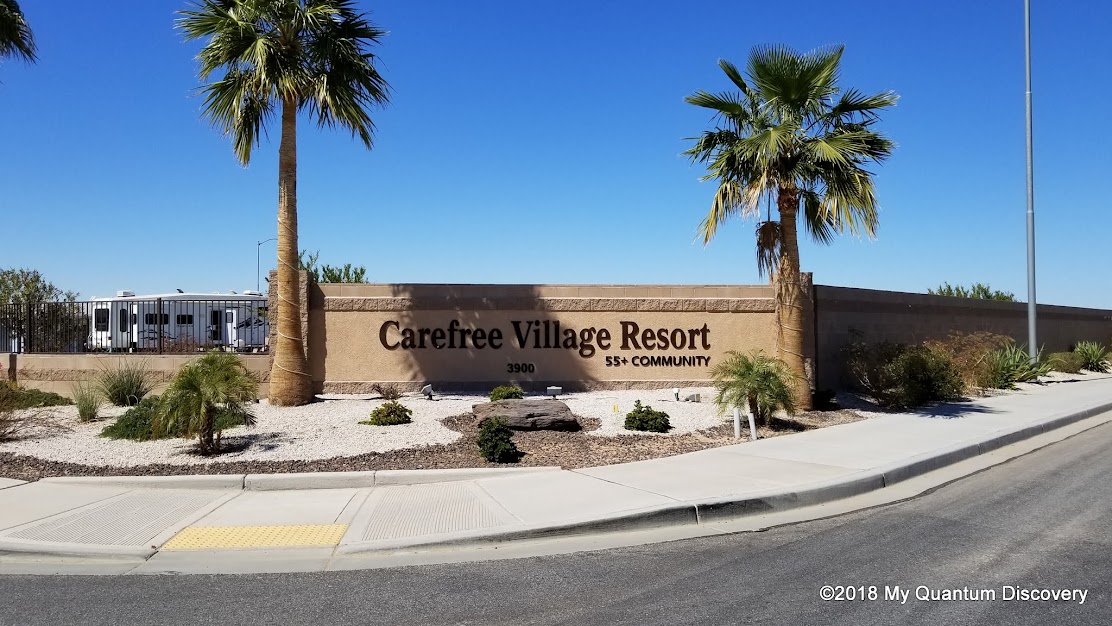 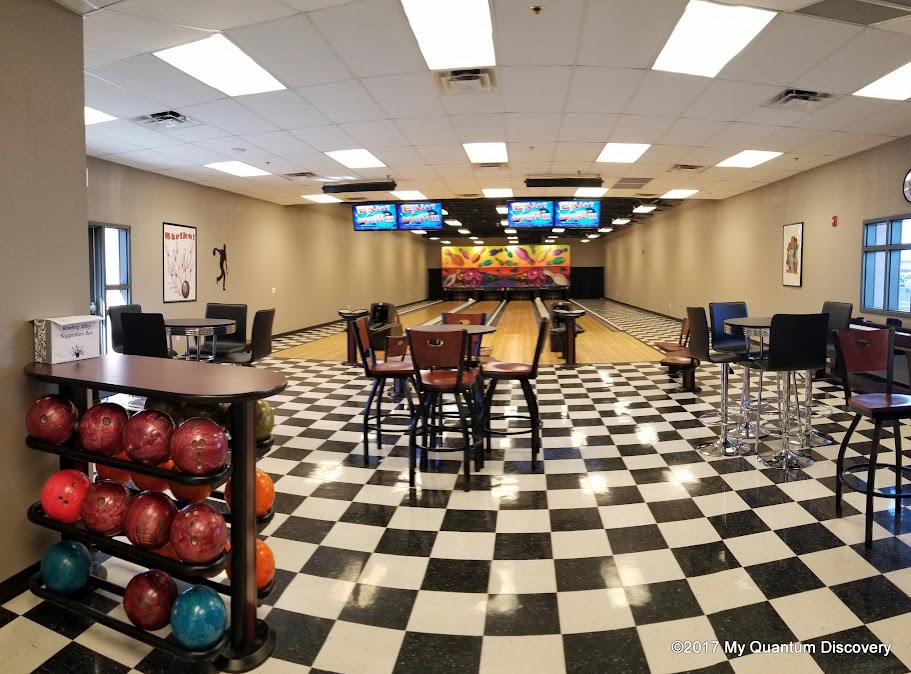 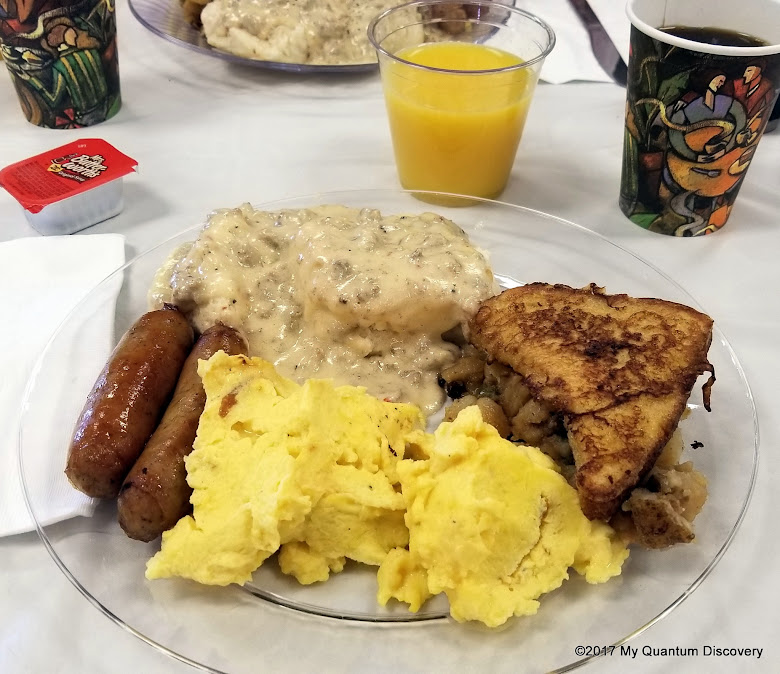 Grrrr, it wasn’t exactly a smooth check in for us. The golf cart of the gentleman who was supposed to escort us to our site broke down so we sat in the parking lot for about 45 minutes waiting. That finally got resolved, but when we were escorted to our assigned site (#130), there was a 5th wheel on it. Oops! Guess someone (or perhaps the “computer”?) screwed up! After much deliberation, we were finally reassigned to a different site (#129).

After our long drive, the loss of an hour due to the time zone change and the hour long delay getting settled in for the night, needless to say, we weren’t exactly happy campers. But a very thoughtful gesture of a bottle of wine given to us by one of the staff members later that evening made up for any frustration we had felt earlier. 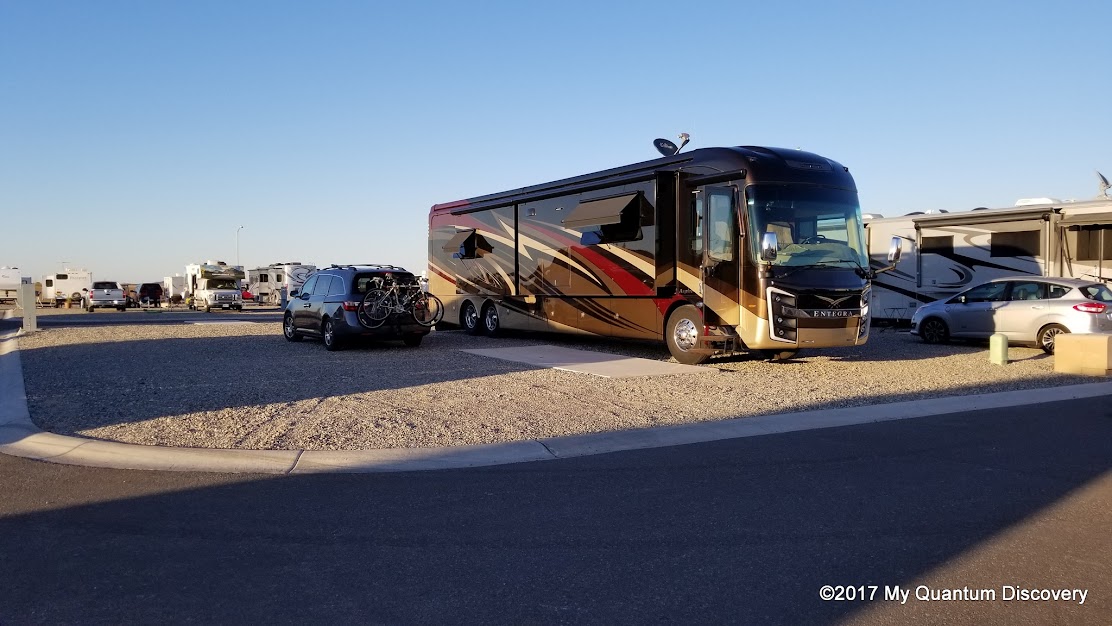 That night a huge full moon rise in the sky – at one point it looked like it was sitting on top of the mountains.

Did you know that Yuma:

The next morning we were ready to start exploring the area. If Yuma was the winter vegetable capital of the world, there must be a lot of fresh produce markets in the area so that was our first order of business. The Arizona Marketplace, which is open Thursday through Sunday from 9:00AM to 4:00PM November through mid-April, was one of our first stops. On 32 acres and with over 1000 shaded selling spaces, they must have a few fresh produce stands, correct? Well, we only found two with somewhat limited selection (we did buy a few items) but that’s okay it was fun walking around this giant flea market with hundreds of vendors selling everything from upholstery, awnings and mattresses to t-shirts to RV Supplies to Chiropractic services to custom built drones! Food items were available in both individual booths as well as a huge food court. There’s even entertainment on certain days of the week! 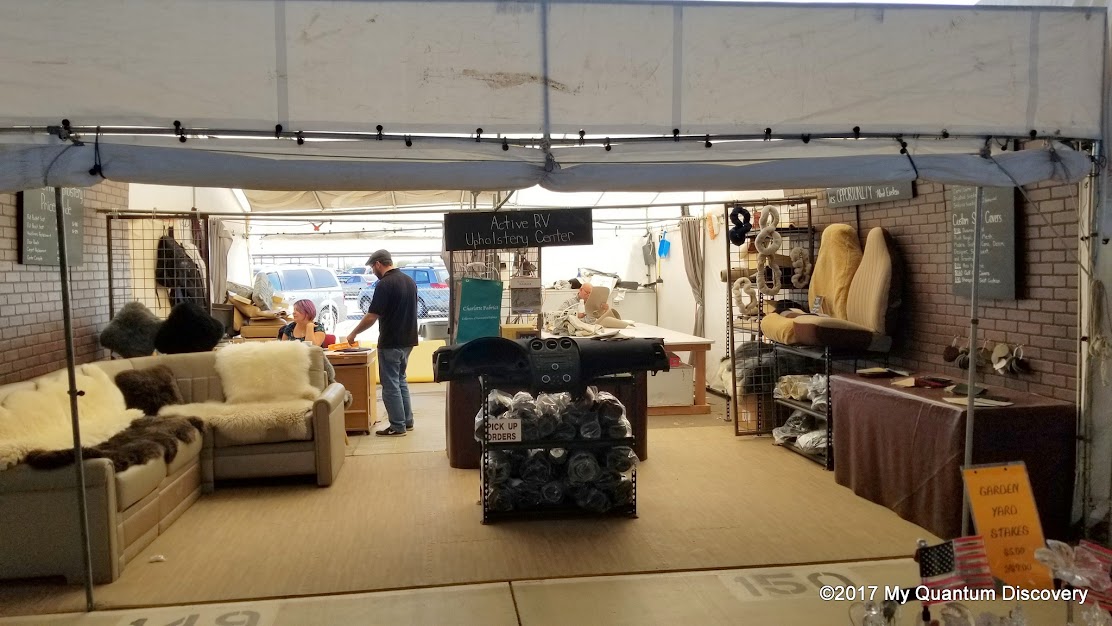 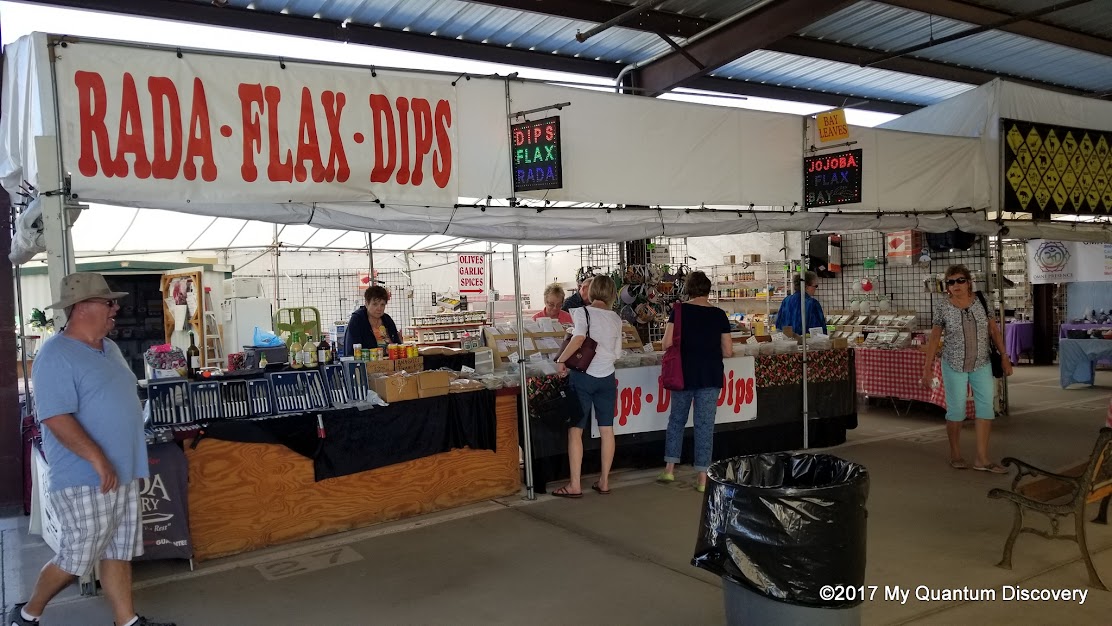 Another place we stopped at was The Peanut Patch where there are hundreds of different candies and natural snacks. If you have a hankerings for ice cream, a date shake or fudge, find your way inside the store to their sweet shop. We didn’t know it at the time but they offer free tours on Tuesday and Friday at 10:00 am in the months of November, January, February, and March.The tour consists of a bit of history of The Peanut Patch itself, pictures of how peanuts are grown, along with an explanation, a demonstration of how peanut butter is made, as well as a taste of the fresh product, a look at one of the original peanut combines and a walk through the back of the store where the homemade products are being made. 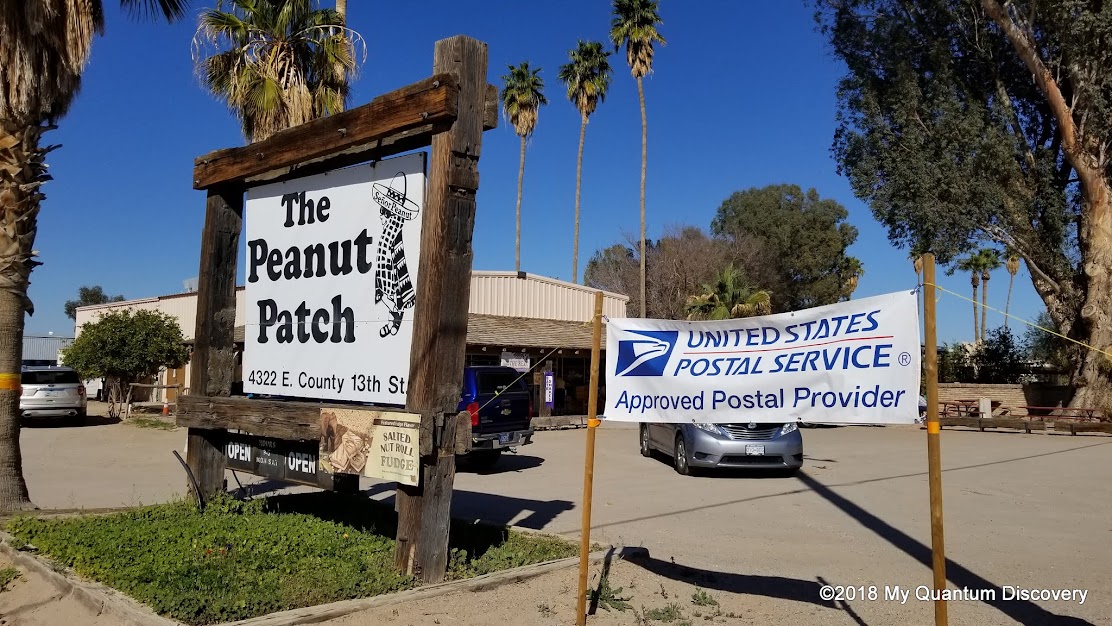 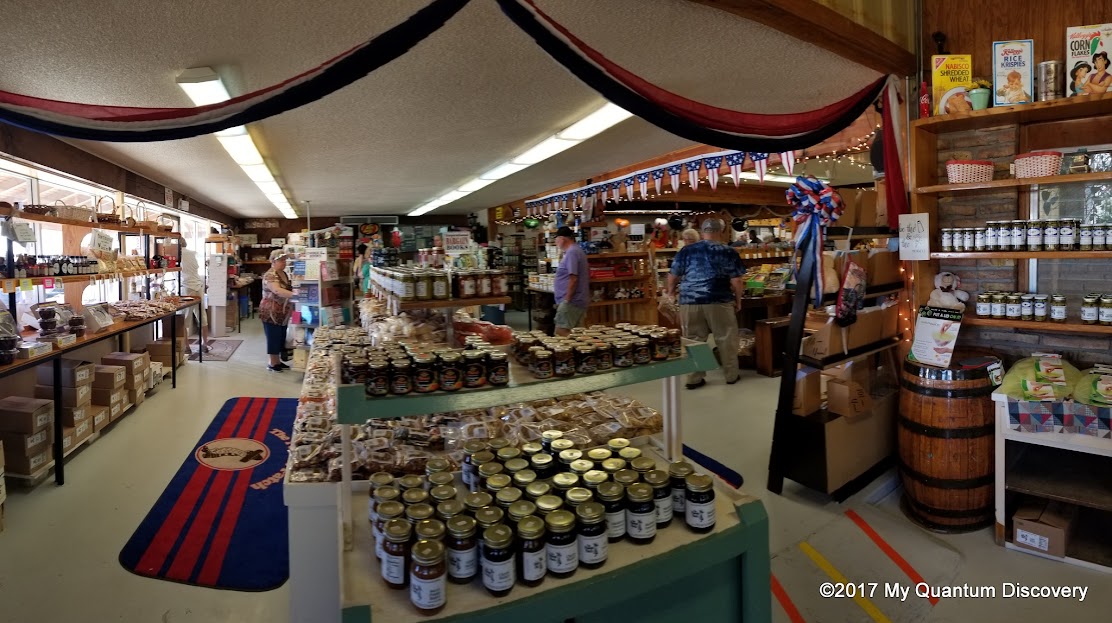 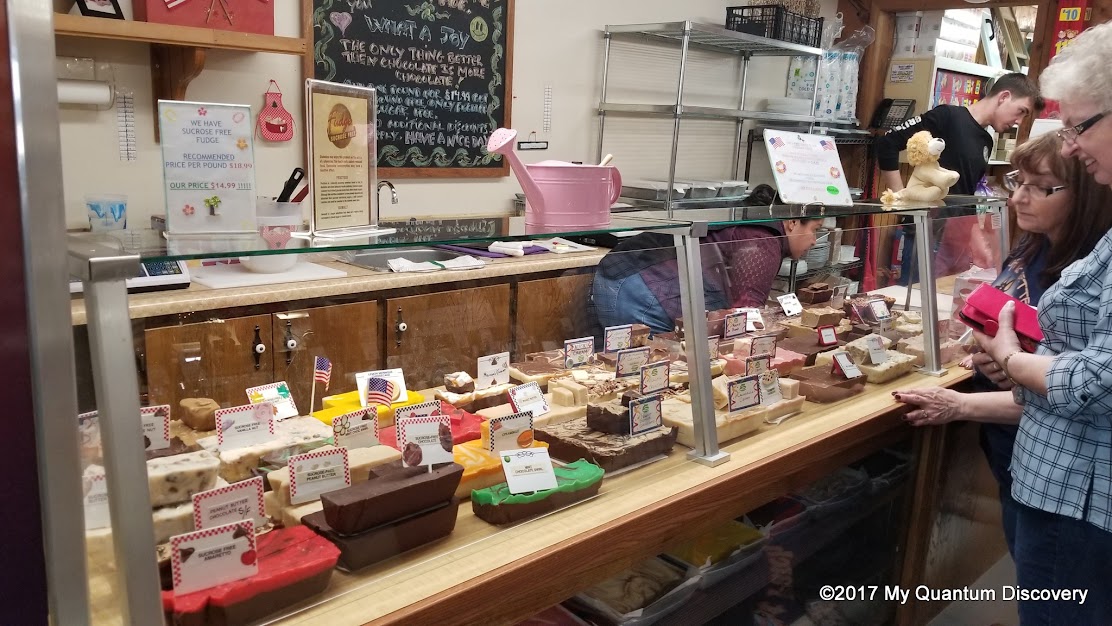 But wait, we weren’t done with Yuma yet, there’s more to come!