On the morning of this day near Colorado Springs we were enjoying the glorious splendor of the towering sandstone formations at Garden of the Gods. By afternoon, we were in the dark, somewhat spooky subterranean caverns looking at speleothems (cave formations) at Cave of the Winds located in Williams Canyon in Manitou Springs.  Quite a transition in just a matter of hours! 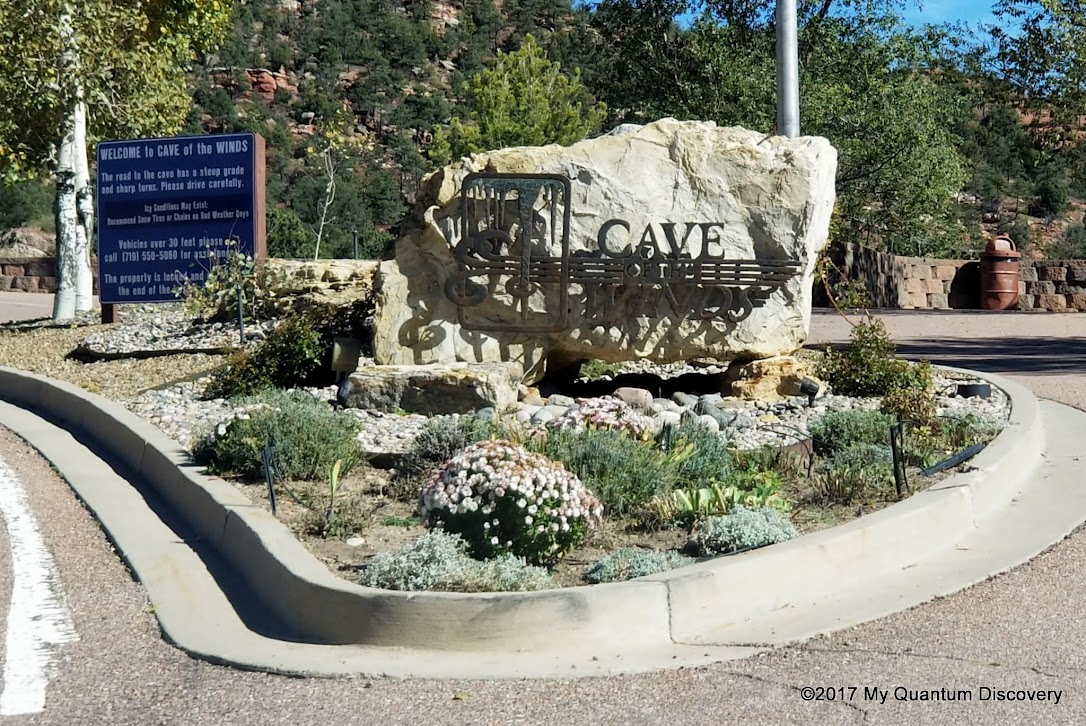 Little did we know until we arrived that this park had a lot more to offer than just the cave. For adventure seekers who are looking to spend some money, enjoy an adrenaline rush or 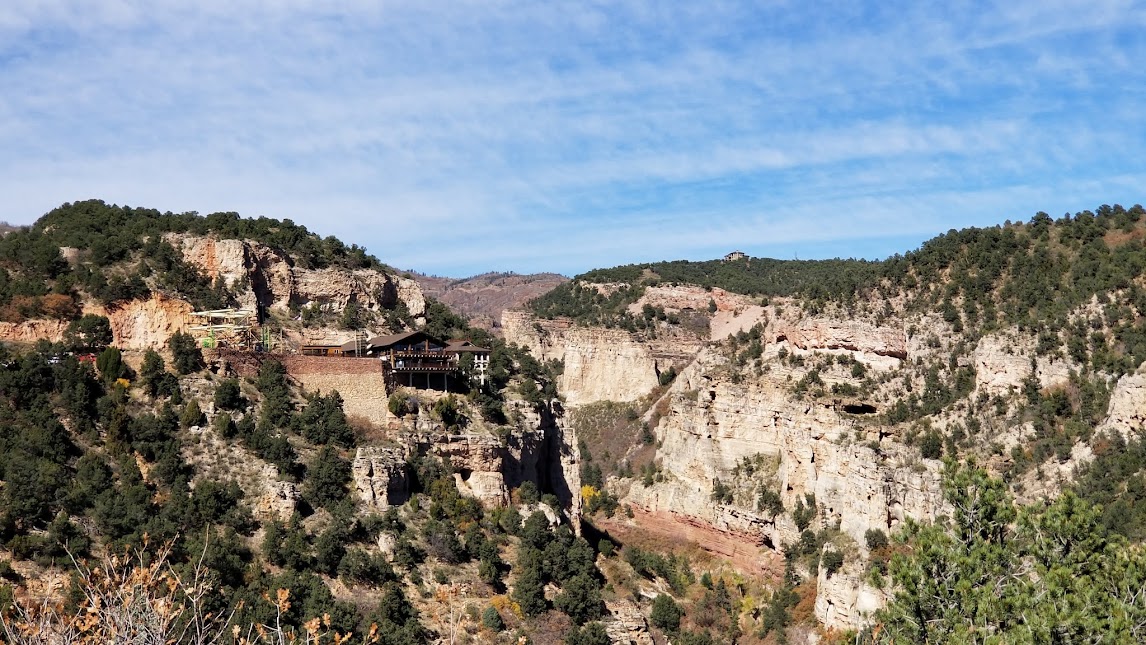 experience a true dose of terror, there are a number of exhilarating “rides” to choose from. There’s the one of a kind Terror-Dactyl ($50 per person) which launches those brave enough to try it off of a 200-foot cliff at nearly 100 miles per hour! Or there’s the Bat-A-Pult  ($25 per person), a 1,200-foot round-trip flight across Williams Canyon at speeds of nearly 40 mph. 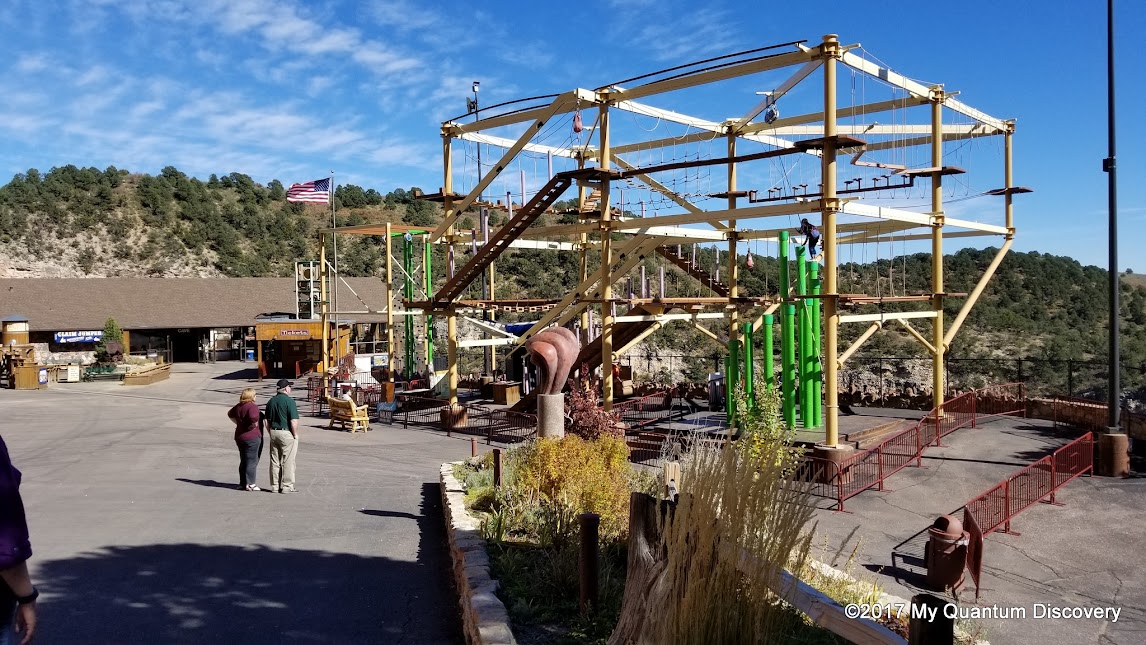 However, if flying through the air isn’t your cup of tea, try the Wind Walker Challenge Course ($25) which is a unique 3-story obstacle course with 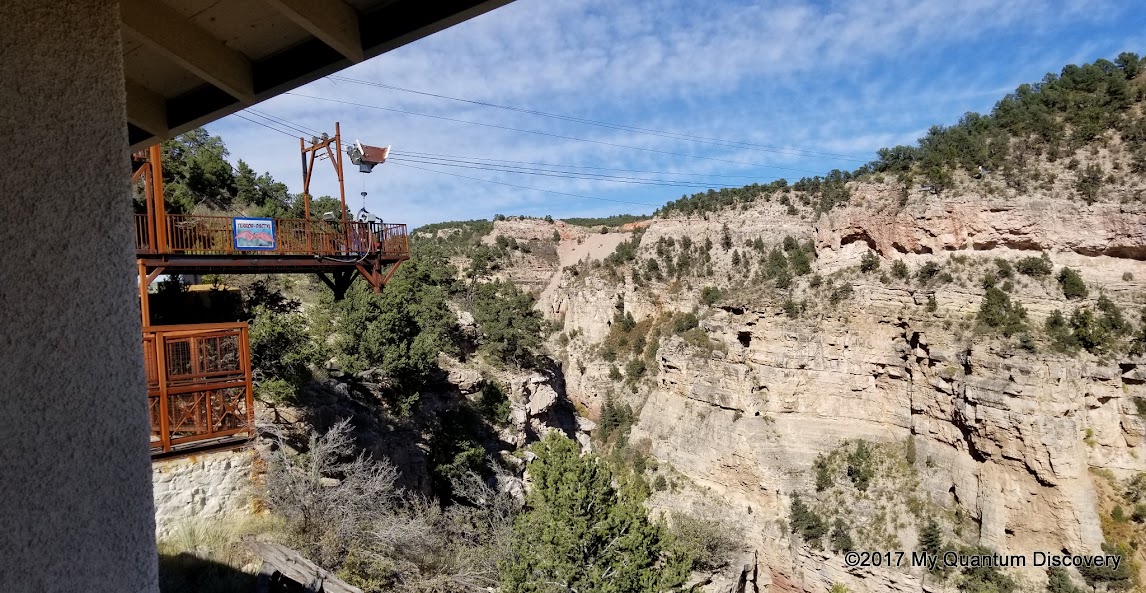 a maze of steel beams, ropes, and ladders. Like a huge jungle gym! That’s not all there is – learn what else they have on their website! Great (but expensive) place to take your kids! 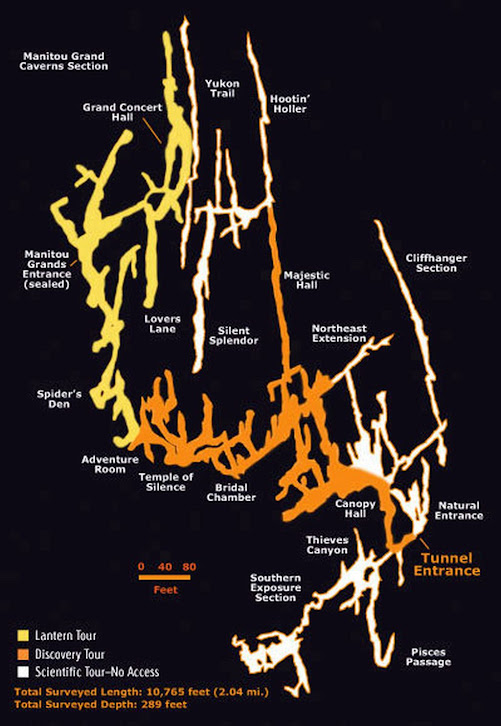 For those of us not quite so adventurous, there are several cave tour options: the 45 minute Discovery Tour (Ages 6-12 $15, Ages 13 & up $21, Under 6 Free), an easy, educational walking tour during which the tour guide explains the history and geology of the cave, a 90 minute Lantern Tour (Ages 6-12 $18, Ages 13 & up $31) where you are taken deeper into the cave to explore tunnels and passageways only lit by the hand held lanterns that are carried by the tour participants and the 120 minute Caving 101 (Ages 13 & up $45) where visitors can climb and crawl through passageways lit only by flashlight.

Driving up the twisty, turny Cave of the Winds Road to get there was enough of an adventure so it was the Discovery Tour for us! 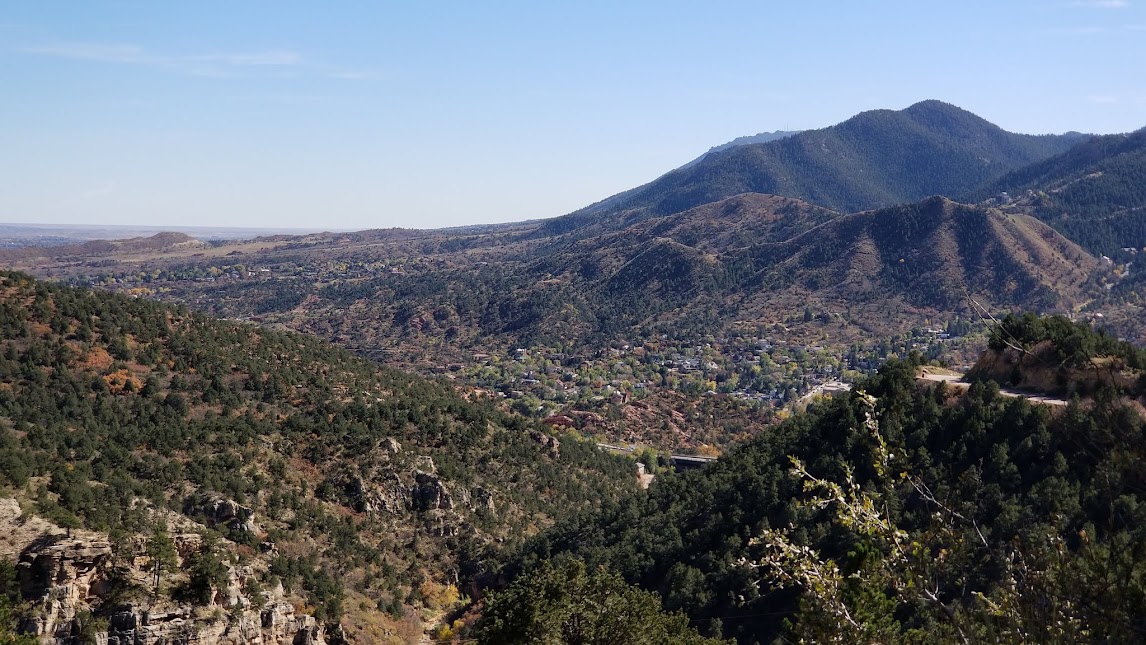 Once we arrived, we had about 45 minutes before the next tour so we spent our time perusing some of the exhibits on display and sitting on the balcony enjoying the excellent weather and soaking up the views of the canyon and surrounding mountains. 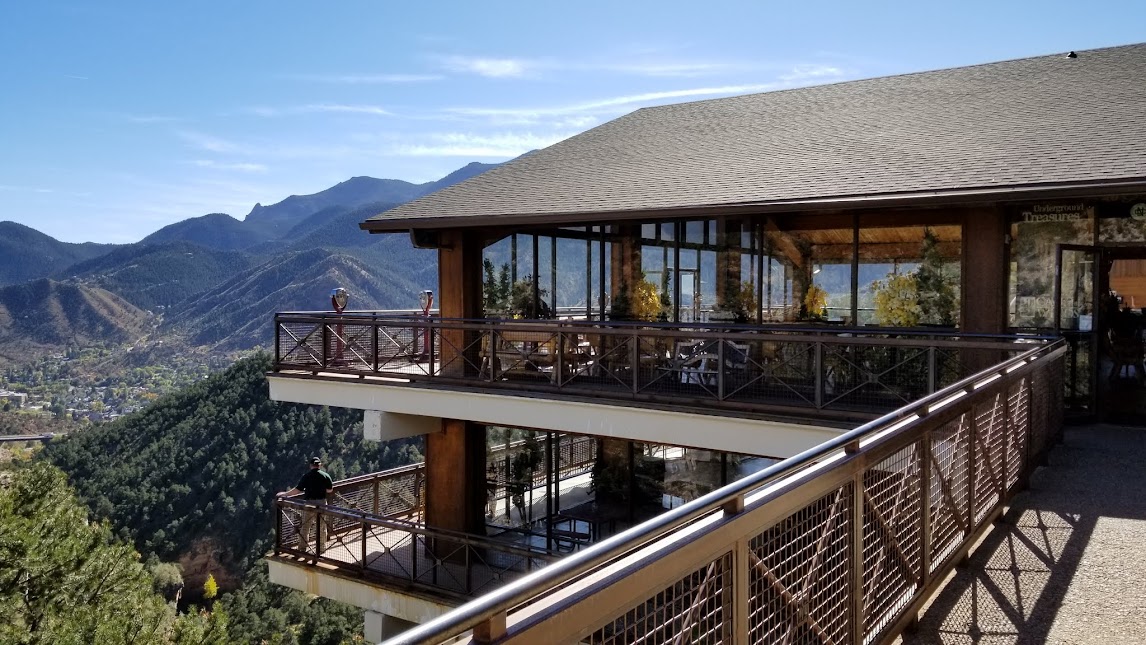 With the tunnel entrance to the cave estimated to be at 7140 feet in elevation, Cave of the Winds is the second highest cave in the United States. The first is Glenwood Caverns which is also located in Colorado. Another claim to fame is that it is one of Colorado’s oldest and most famous attractions because it has been in operation since February of 1881! Rob remembers coming here with his parents when he was just a teenager. 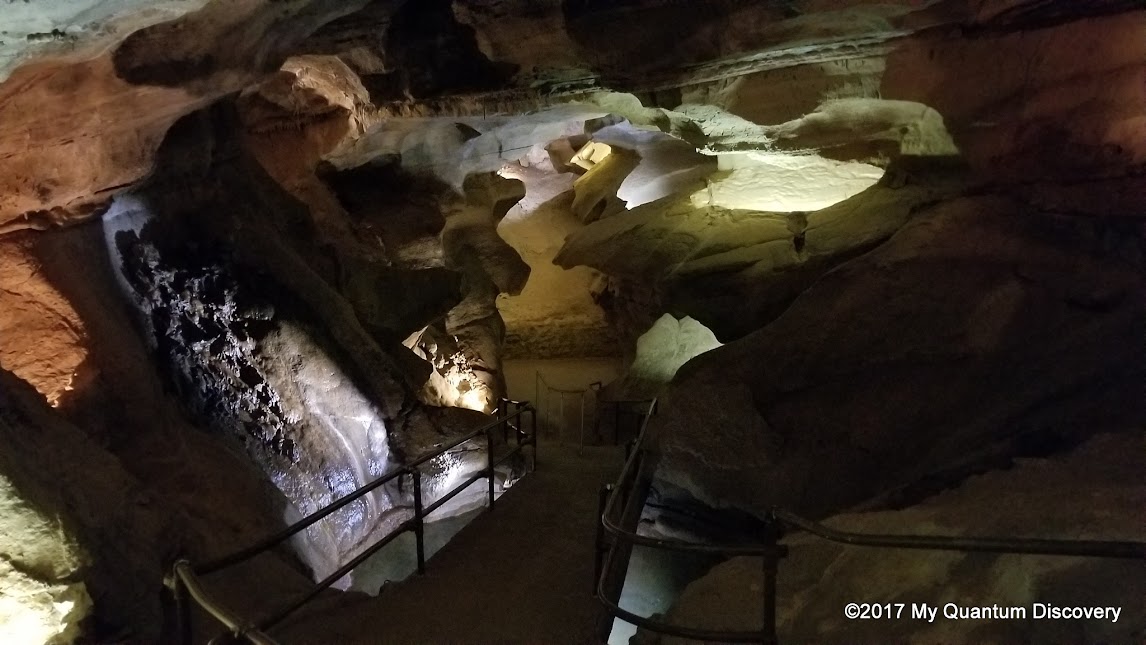 As with other caves we have toured recently, before descending the steps to a depth of 289 feet to begin exploring the 10,375 feet of surveyed passageways, we were warned not to touch anything in the cave as the oils from our hands could cause severe damage to the million year old formations.

As we entered the first large chamber, our guide apologized for having to take care of a bit of commercialism requesting each individual group pose in front of one of the formations so she could take a photograph. Of course these were available for purchase at the end of the tour. Sorry that we don’t remember the exact cost (we obviously didn’t buy the photo) but we think it was in the vicinity of $15 – $20! Photos can be taken during the tour but it’s always tough taking pictures in a cave! 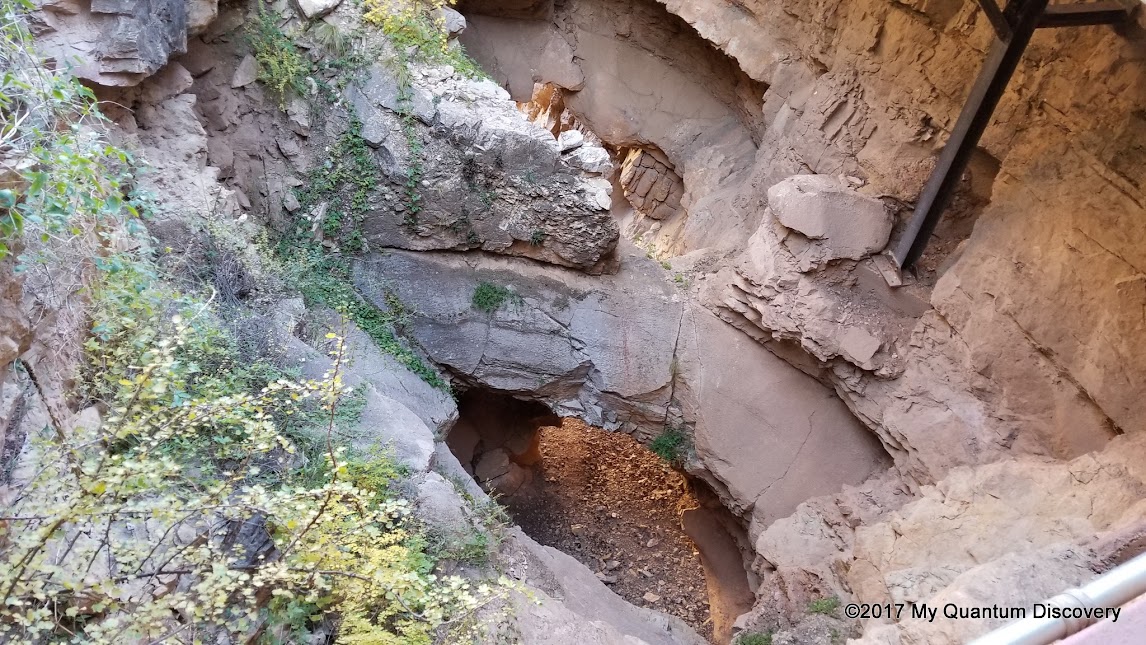 Discovered by twin 10 year old brothers, George and John Pickett in 1880, the cave was named because of the whistling sound they heard made by the wind blowing over the tops of the sinkholes. Then late in 1880, an Ohio stone cutter named George Washington Snyder fully excavated several passages allowing guided tours to the public to be offered as early as 1881. Only the wealthy could afford the $1.00 admission, a day’s wage back in those days. With the installation of electricity in parts of the cave in 1907, the tours became even more popular. Interesting that during our tour, we passed under one of the remaining original light bulbs which according to our guide was tested in 2007 to see if it worked (it was) and will be tested again in 2107. 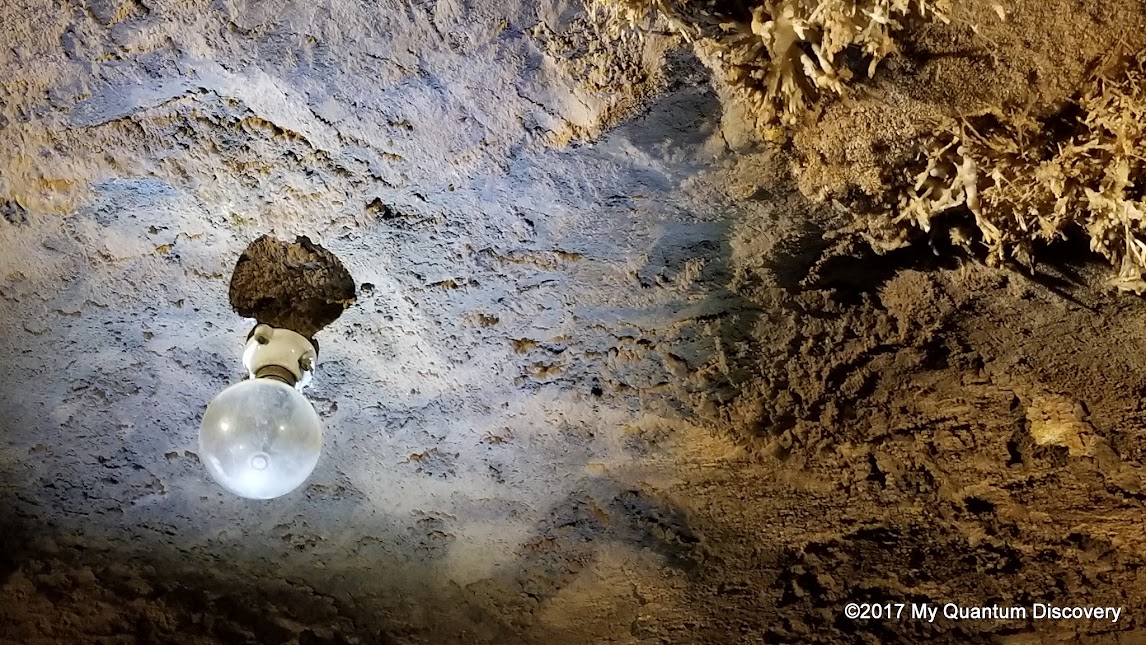 Although most of the cave is open to the public, some sections are closed due to sensitive formations, including a crystal filled room called Silent Splendor discovered in 1984 that contains numerous rare crystalline speleothems. 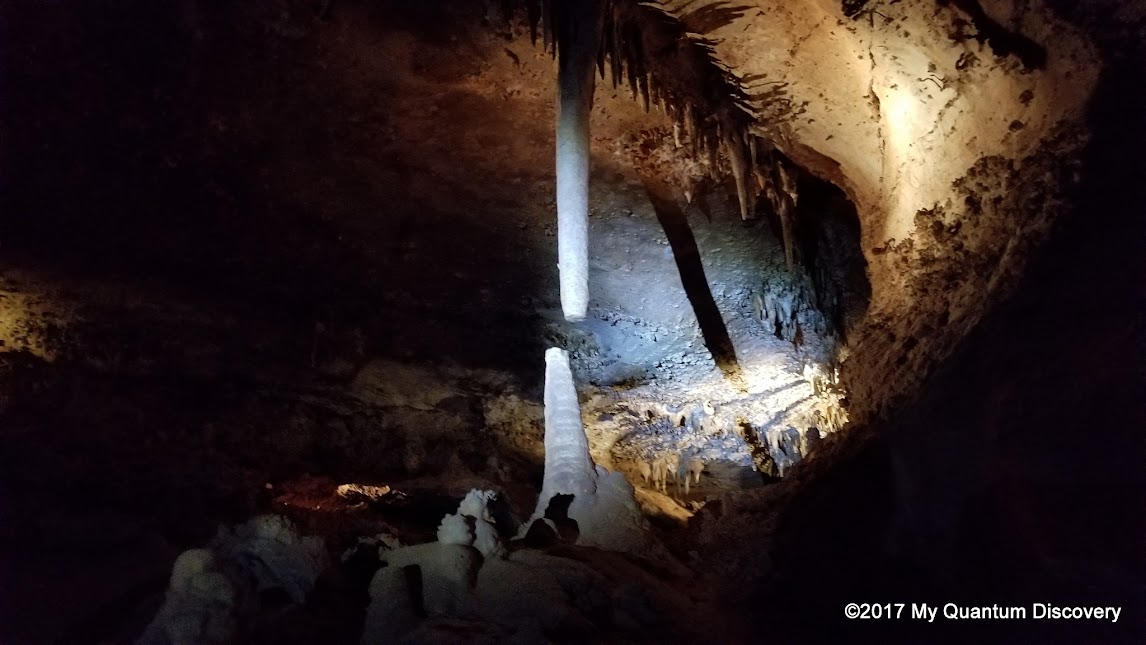 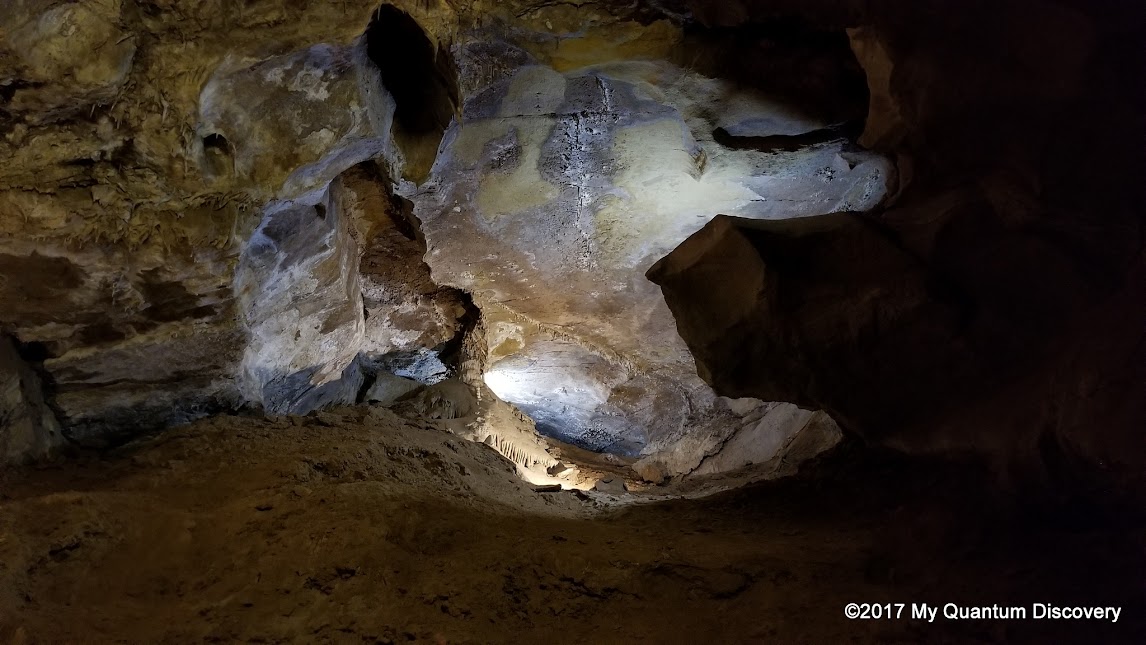 As our group meandered along the passageways, our guide explained the geology of the cave as she pointed out various cave formations, including stalactites, stalagmites, flowstone, popcorn, cave bacon or draperies, ribbons and more. Seeing how huge some of these formations were, it was hard to believe that it takes 1000 years to grow 1 cubic inch! 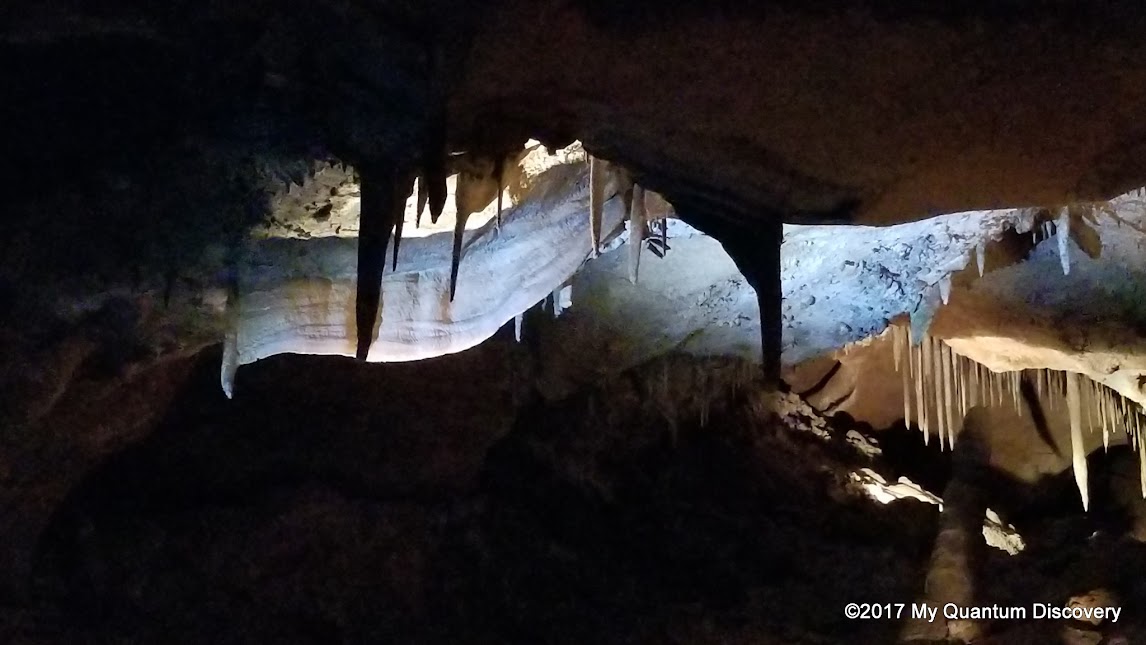 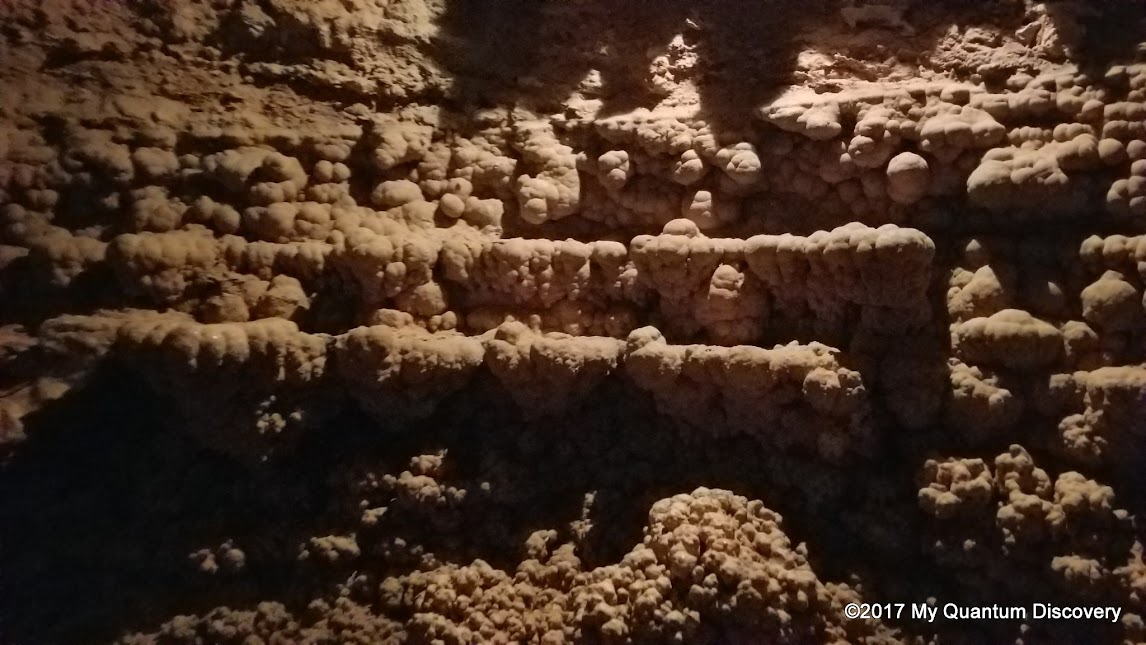 We passed through a number of large rooms with exotic names such as Canopy Room, Bridal Room, Temple of Science, Adventure Room, and Majestic Hall. Kind of felt like we were in the 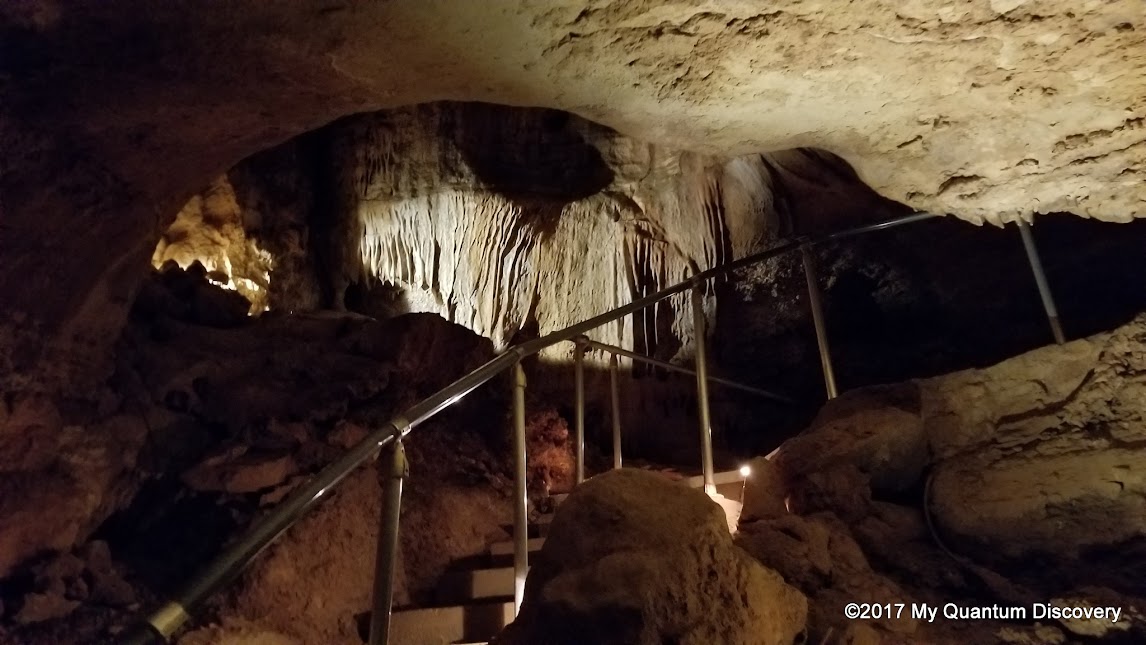 Raider’s of the Lost Ark movie!  Canopy Room is the biggest room in the cave and buried there is a time capsule placed in 1981 by owner Lou Carey and manager Grant Carey. It is scheduled to be opened in 2081. Contents include a guide’s shirt and badge, a $100 bill, a video cassette, brochures and pictures of the cave, a flashlight, a Bible, two personal letters as well as other items.

Navigating the tunnels was fairly easy as many of them were wide enough for everyone on the tour to pass through comfortably at least until we came to the smallest passage in the entire cave, appropriately named “Tall Man’s Headache, Fat Man’s Misery”. With a name like that, we certainly didn’t need any further explanation as to what to expect! Everyone on the tour knew to duck and suck in your gut as we passed through!!! 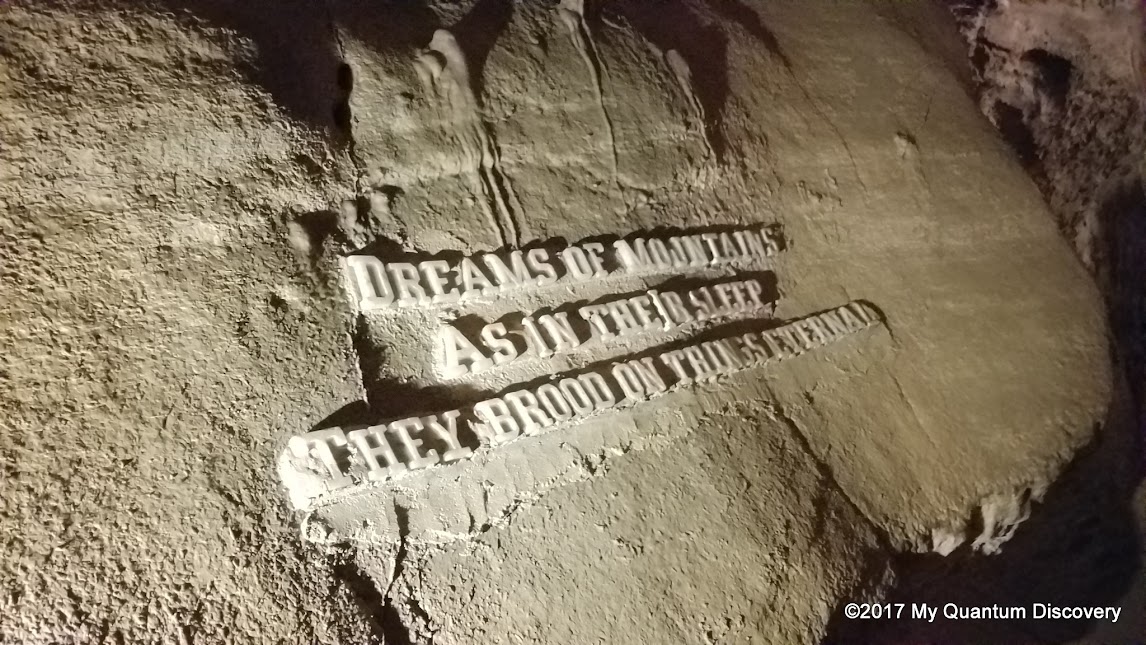 The tour used to end at Pickett’s Column, named for the original founders but now it extends beyond that spot thanks to George Jefferies, the person who donated money to continue the tour expansion. His only condition was that his name be mentioned on every tour and that he could place a line from one of his favorite poems about the Grand Canyon, The Titan of Chasms by C.A. Higgins in the cave. As we heard on the tour and as you can see from the photo above, he got his way!

Towards the end of the tour, we stopped at a particular ledge that was covered with netting holding coins and other trinkets in place. Legend has it that two young maids visited the cave 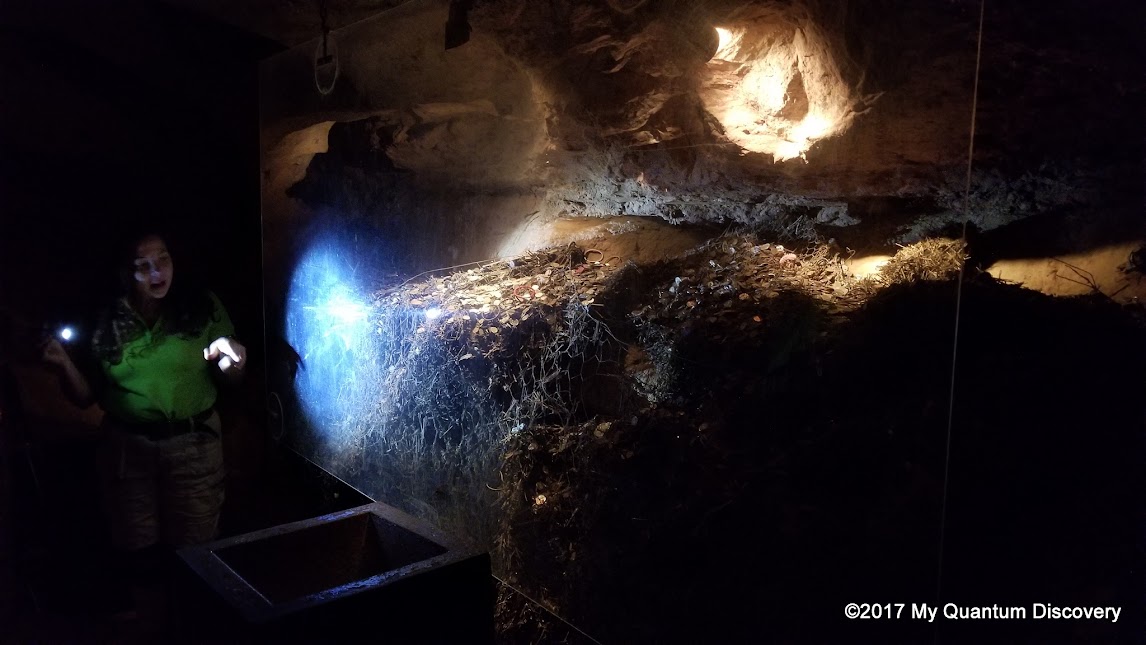 back in the 1930’s. Thinking the room was boring, they amused themselves by putting two hair clips on the ledge. When they returned a year later, they were both married to rich men. This generated the superstition that leaving something valuable on the ledge would bring a year of good luck. Judging by all the “stuff” that was there, there must be a lot of lucky people walking around! In fears that the ledge might collapse from the weight, that tradition is now prohibited.

We passed by one of the original ladders used to descend into the cave, estimated to be about 132 years old. Because the original cave floor has been expanded since then, the ladder ends about six feet off the ground. 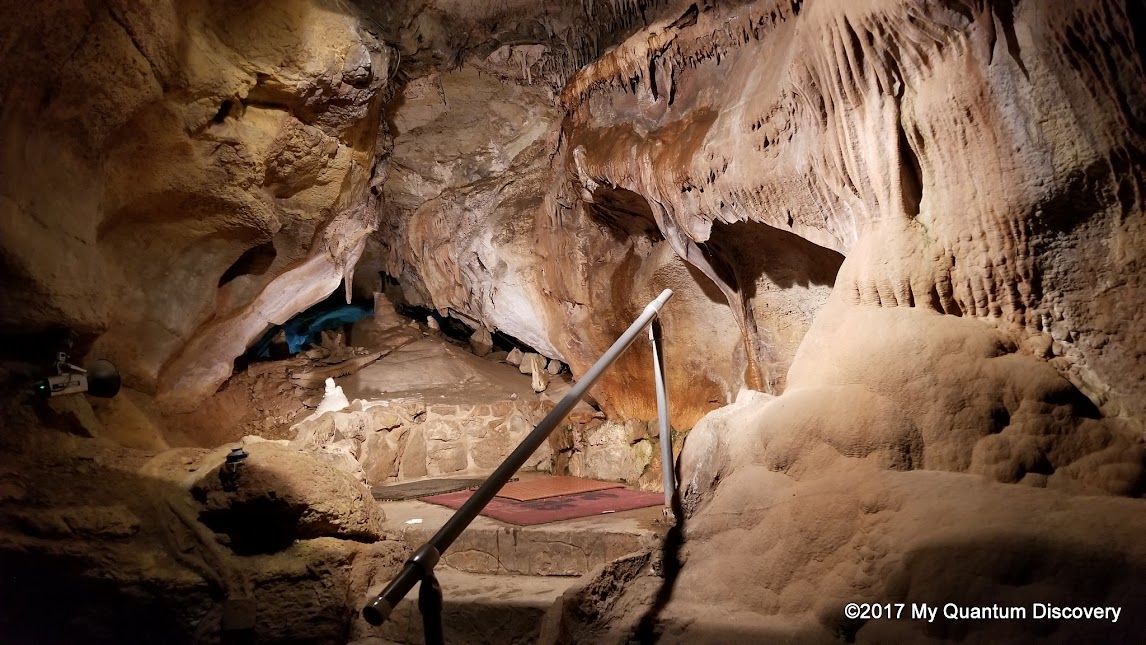 Before we knew it, the tour was over and we made our way back to the parking lot. Overall it was an interesting tour but probably not as good or spectacular as other cave tours (i.e. Kartchner Caverns in AZ or Mammoth Caves) that we have been on. 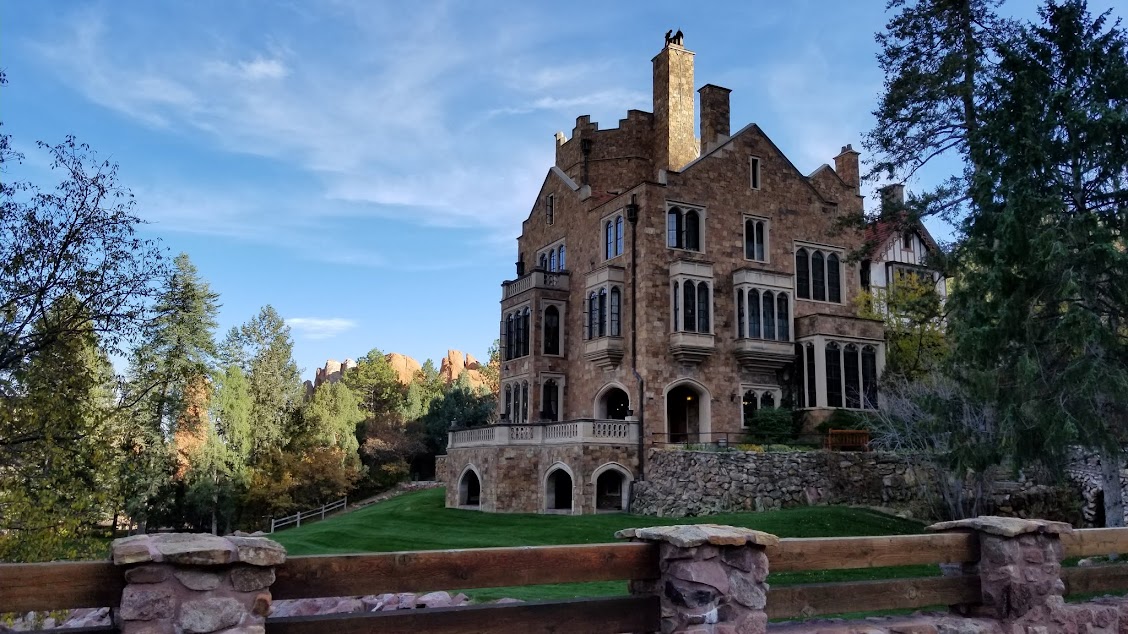 But wait, our day of sightseeing still wasn’t over! We had one more stop to make! Intrigued with the possibility of seeing Bighorn Sheep, we headed to Glen Eyrie Castle and Conference Center which is owned by The Navigators, an international, interdenominational Christian ministry established in 1933. The English Tudor-style castle was built in 1871 by General William Jackson Palmer, the founder of Colorado Springs. Tours, teas, lodging, meeting rooms and a book store are all offered at the castle. The grounds were quite beautiful with sweeping lawns and more beautiful red rocks! Although we did see quite a few deer grazing on several of the lawns, we were disappointed – we really wanted to see Bighorn Sheep.

Suddenly one of the staff members driving by in a golf car shouted to us that a herd had just come down from the hills and were grazing at one of the fields. Oh boy, there they were about 12 of them! We sat on one of the nearby park benches watching them for a while. How totally awesome it was to see these wild animals in their natural habitat.

After gazing at them grazing for awhile, we finally decided it was time to head back to the coach. What a busy day! We had one more sightseeing excursion planned in Colorado Springs…more about that in our next post.