Florida. Ah yes, we weren’t ready to leave the sunshine state yet! After leaving our piece of paradise at Riverbend Motorcoach Resort it was time for us to head north and west. Along the way, we would visit several of the beautiful Florida State Parks where we could take advantage of the 50% resident discount. Yes, except for one night it would once again be a déjà vu or “been there, done that” itinerary!

As mentioned in our previous post, our Riverbend site is up for sale. According to our realtor, although everyone loves our site because of the landscaping and privacy, one big drawback from the perspective of many buyers is not having a finished coach house. Soooo, if it doesn’t sell, we decided to return there in April so Rob can spend time correcting that deficiency. Now that a trip back to southwest FL might get added to our itinerary before returning to RI, our travels west might be limited to “only as far” as Texas.

Departure day of course snuck up on us and arrived sooner than desired, but after scrubbing the tire marks and dirt off of our site pad and saying goodbye to our friends, we were on our way on Saturday, December 28th, heading north. Our first stop was someplace new to visit our friends, Mark and Cherilyn and see their new 2020 Entegra Anthem. It was a relatively short drive to Adelaide Shores RV Resort in Avon Park, FL. In general, Adelaide Shores is a very nice looking resort but the check in process was a little weird and actually very inconvenient. Primarily because they were closed on Saturday (the day we were arriving) and Sunday. Huh? Closed on weekends? On their website, it says that “arrival time is between noon & 4:00 pm; Monday through Friday. The office must approve all after hour, weekend, or holiday arrivals.” When I called to make the reservation, I was told that someone from the office would call me the day before our arrival to give us our site assignment. They also only take cash or checks, no credit cards. Fortunately, I had enough time to mail a check to them, prior to our arrival. Say what? Physically mail money? Like with a stamp? Whoa.

Well okay, it’s very retro, but we figured that none of that should have been a problem, at least it didn’t seem to be until we actually arrived there. After navigating a very tight squeeze around some posts bordering the edge of the interior roads to get to site #15, we were surprised to see that the site was occupied (it was hours past check out time), with no signs of the occupants or any indications they were going to vacate. Mark speculated that because the office was closed for the weekend, these people were freeloading, knowing management wasn’t around, they figured they could stay thru Sunday without being challenged – and they did. That’s pretty rude! 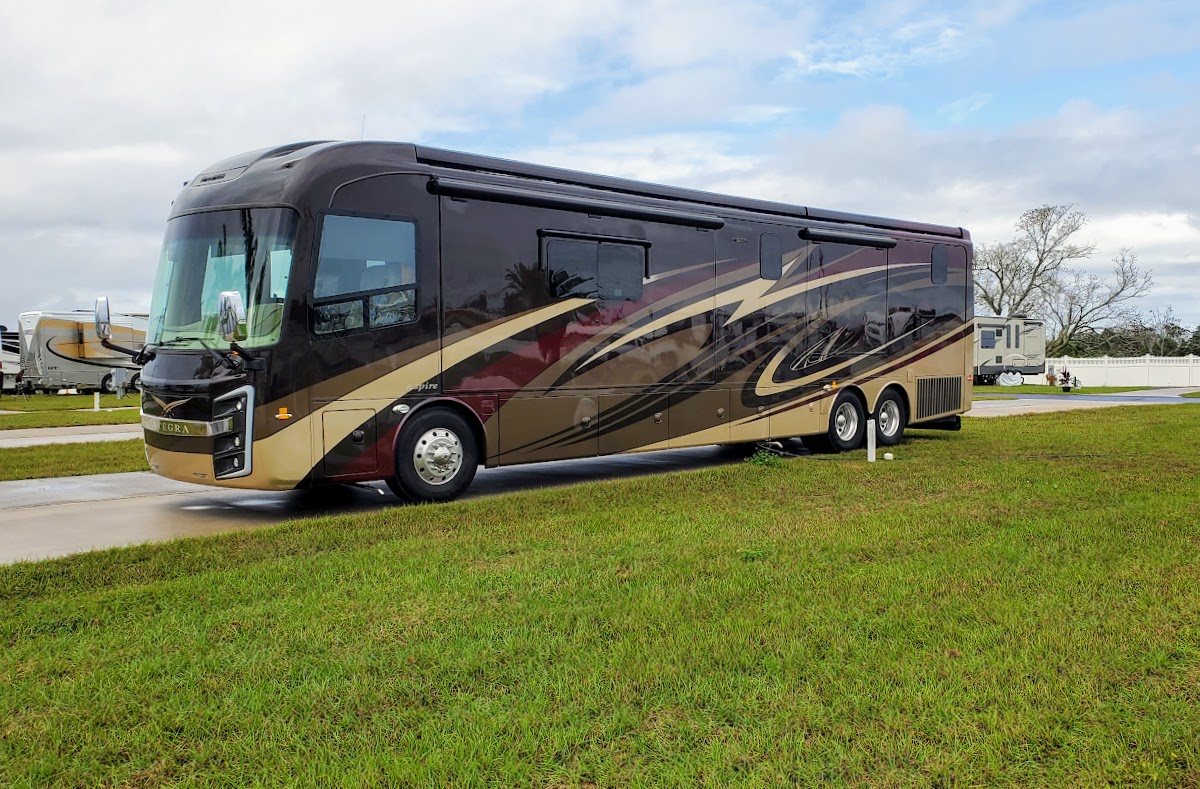 Since we couldn’t check with the office to determine what site to move to (and apparently there is no one on call), we took it upon ourselves and pulled into nearby site #26. That was fine except the cover to the electrical box was sealed shut with an anti-theft tag as were all the other nearby sites. At this point we were getting a bit annoyed with the management “style” here, so out came the cutters to remove the tag. After finally settling in, we headed over to see Mark and Cherilyn and their lovely new coach (which is the same 44B floorplan as ours but 3 years newer). A few new features that we liked – the hutch and the coat closet. Hmmm, will these be added to Rob’s list of projects I wonder? Fun visit! Thanks for your hospitality Mark and Cherilyn! And congrats and best of luck with the new bus.

From there our first déjà vu stop was a few quiet days at Lake Louisa State Park in Clermont, FL. 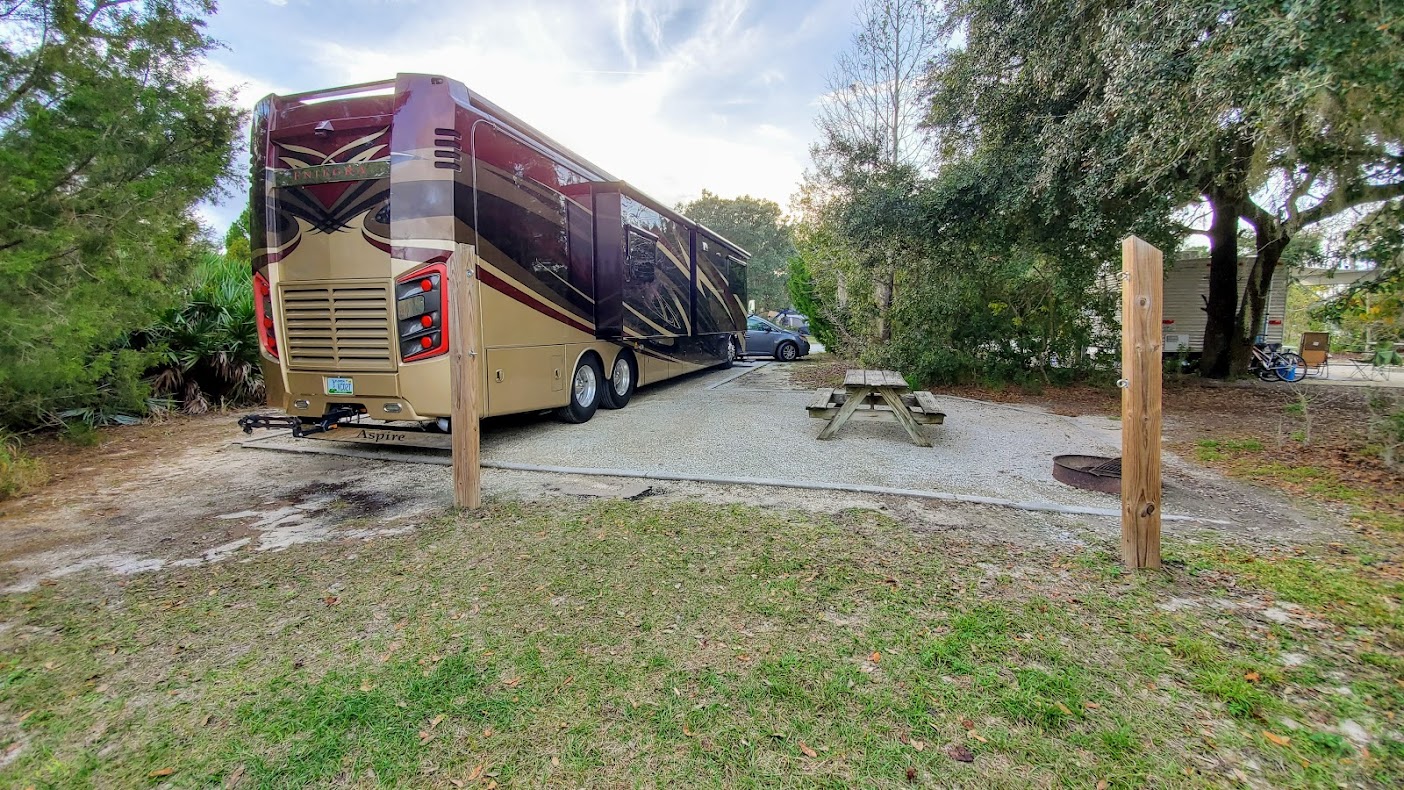 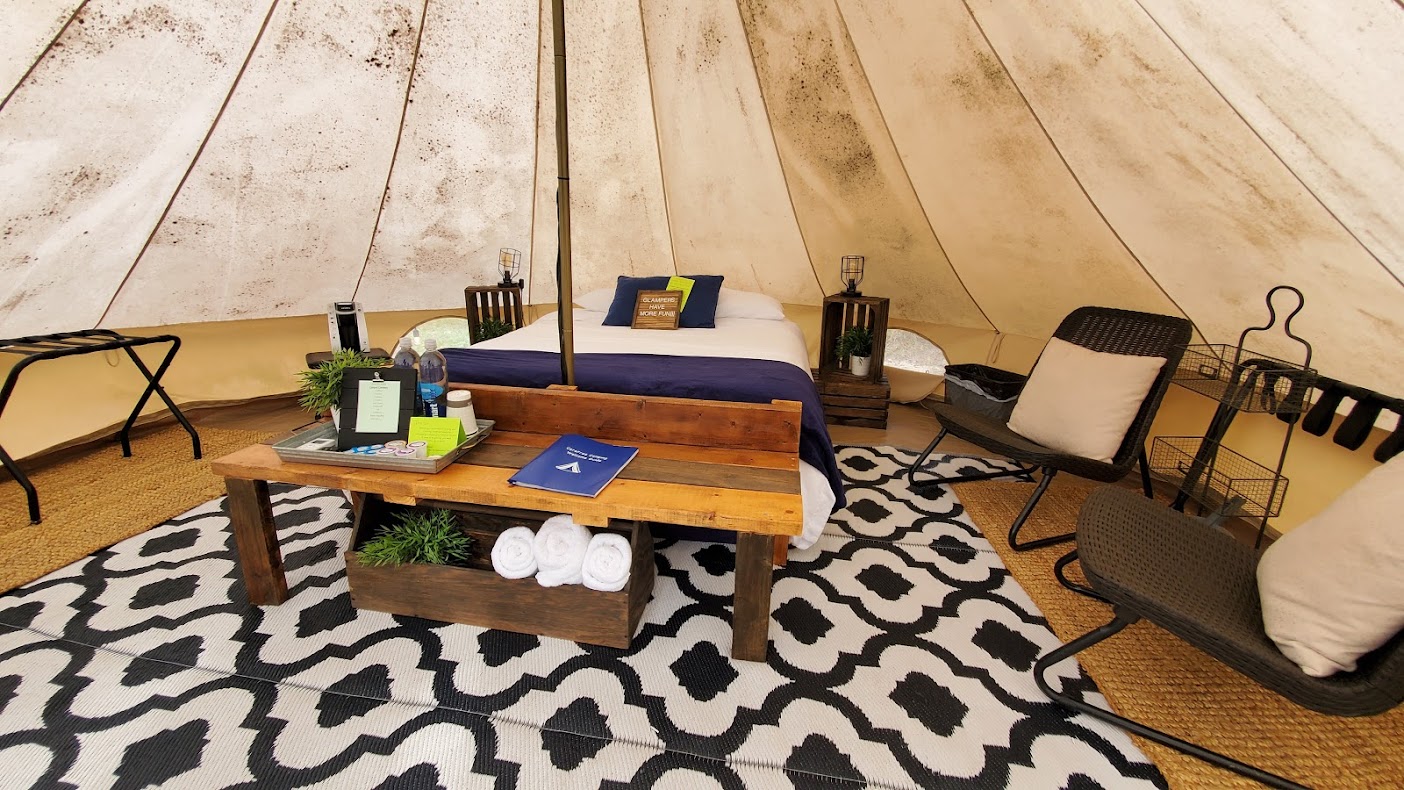 One place we had always wanted to visit when staying at Lake Louisa was the Florida Showcase of Citrus just a few mile south on US27. We finally did! Love the yummy native oranges and honey that we bought. 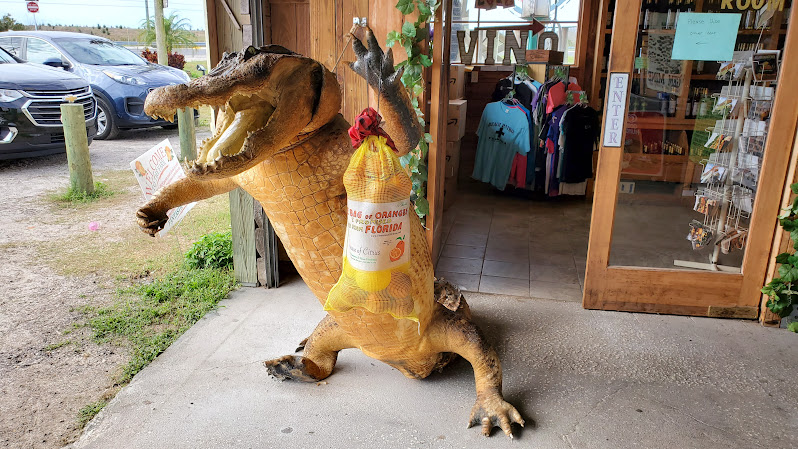 Next deja vu stop was Stephen Foster Cultural Center State Park in White Springs, FL. Nothing special to report except some good relaxin’ and enjoying an evening fire. 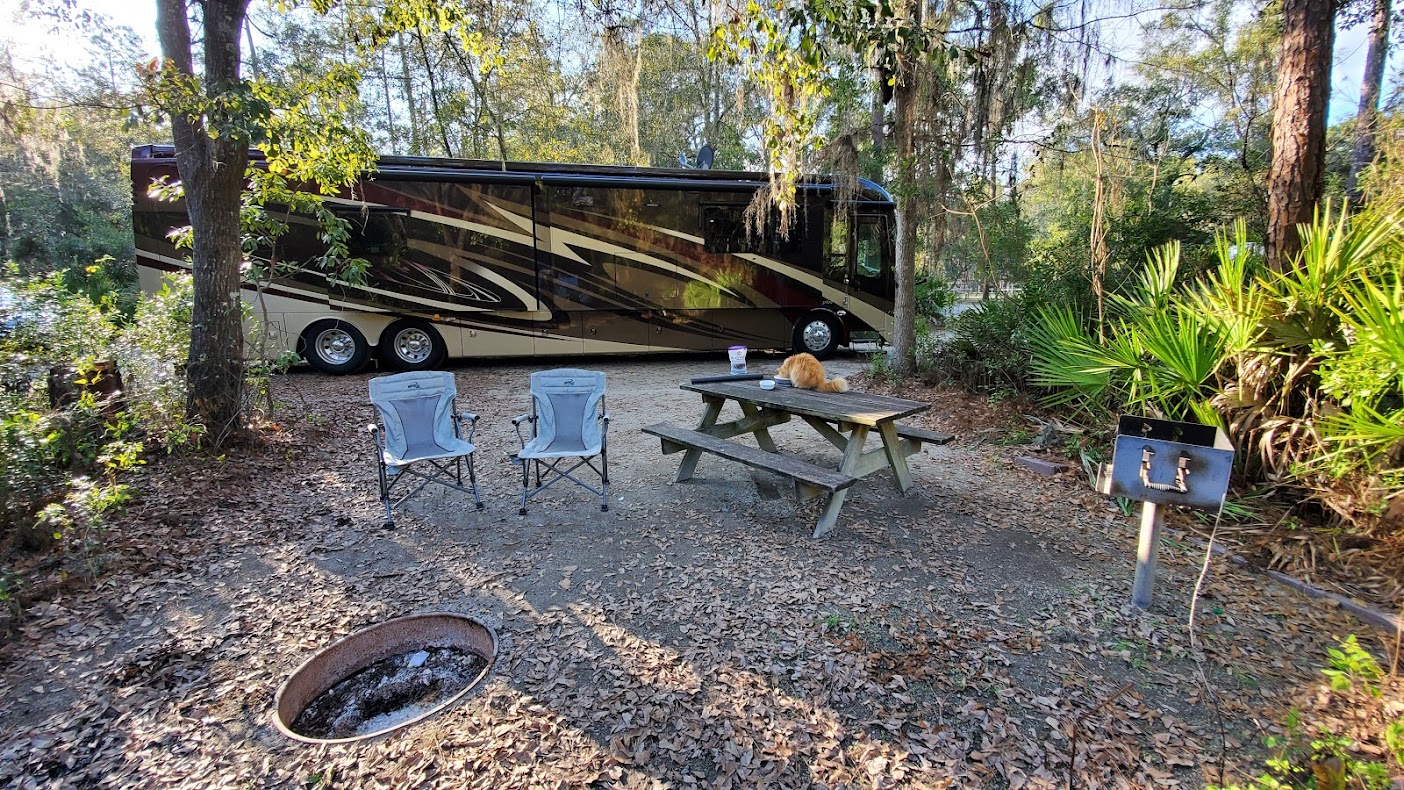 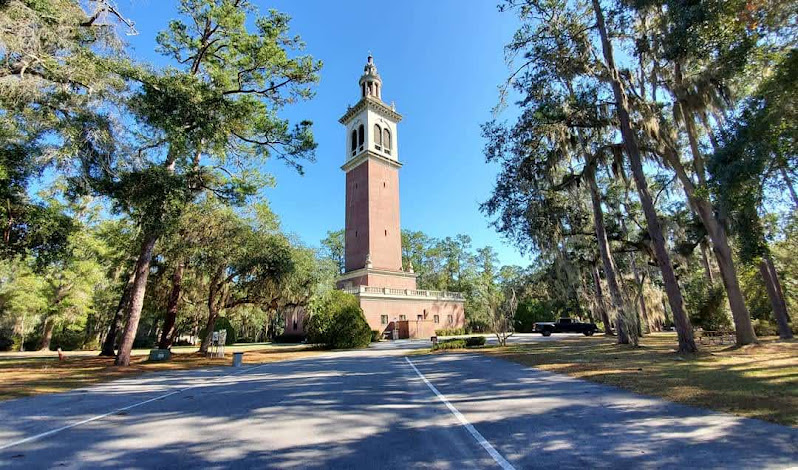 More déjà vu and four days of total peace and relaxation on our lakeside site at one of our favorite COE parks, East Bank Campground, just over the FL/GA border in Bainbridge, GA. This is where our clocks, watches and phones become very confused, but who cares? 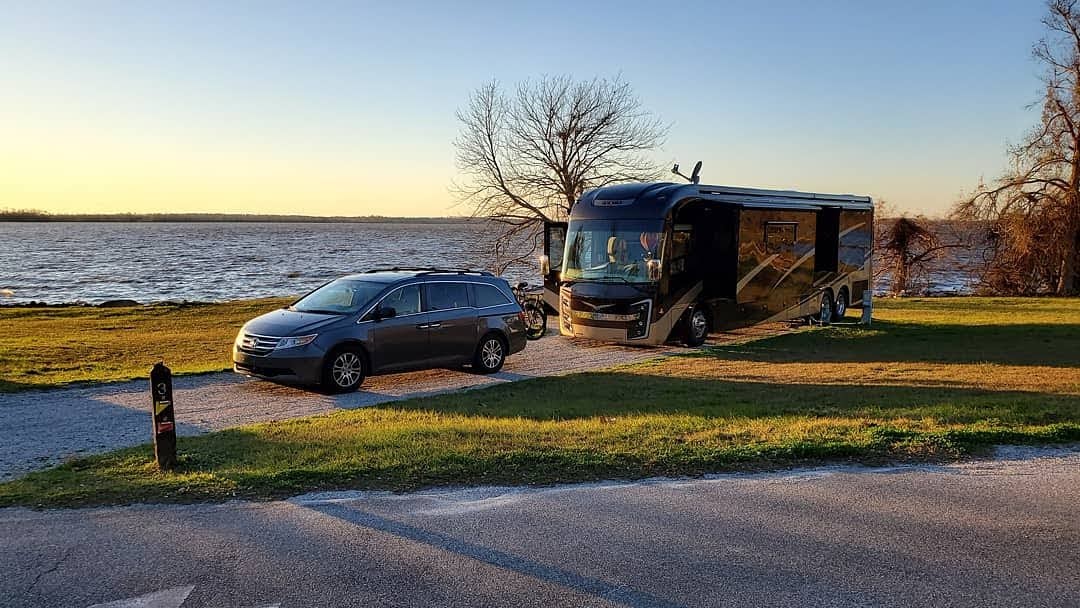 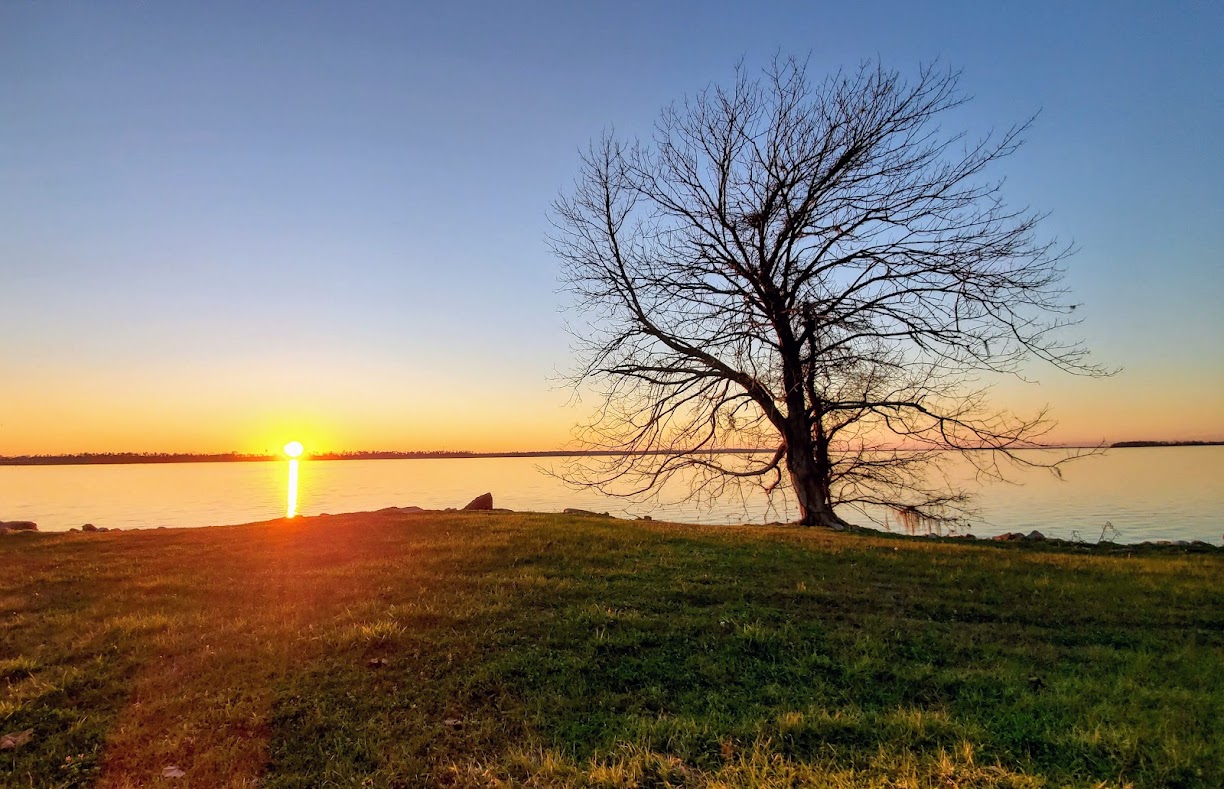 BTW, to read any or all of our posts related to these campgrounds, check out our master campground map. Then click on the particular park (state and COE parks are rose colored) which will not only give you the dates that we stayed at that park and a link to it’s website, but it will also have links to all of our blog posts related to our stay there.

Of course, we can’t pass thru western Florida without another déjà vu stop or two along the panhandle. At Topsail Hill State Park we stayed for 9 days and met up with our workcamping friends, Betsy and Nancy and Pat and Debbie. Not a lot of time to visit with them as they were leaving on January 12th (we arrived on the 7th) to join the Entegra group at the Tampa RV Show. 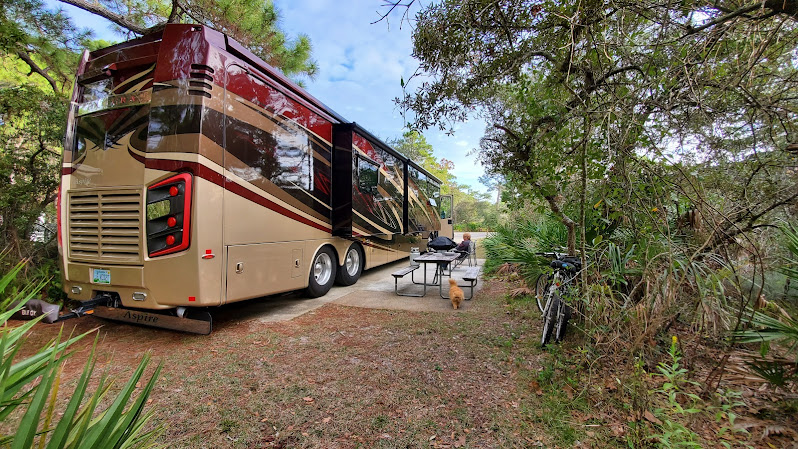 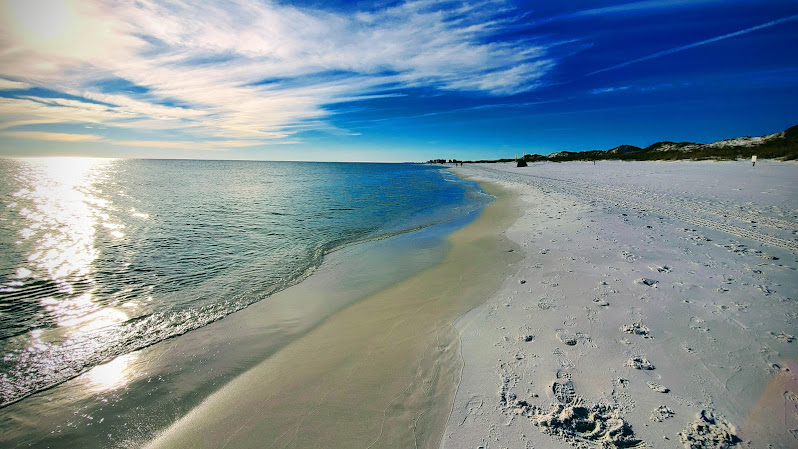 Betsy and Nancy were on the hunt for a new coach (didn’t find one yet) while Pat and Debbie had a booth at the Camping World tent to sell PotHeadz, a product they developed last year. 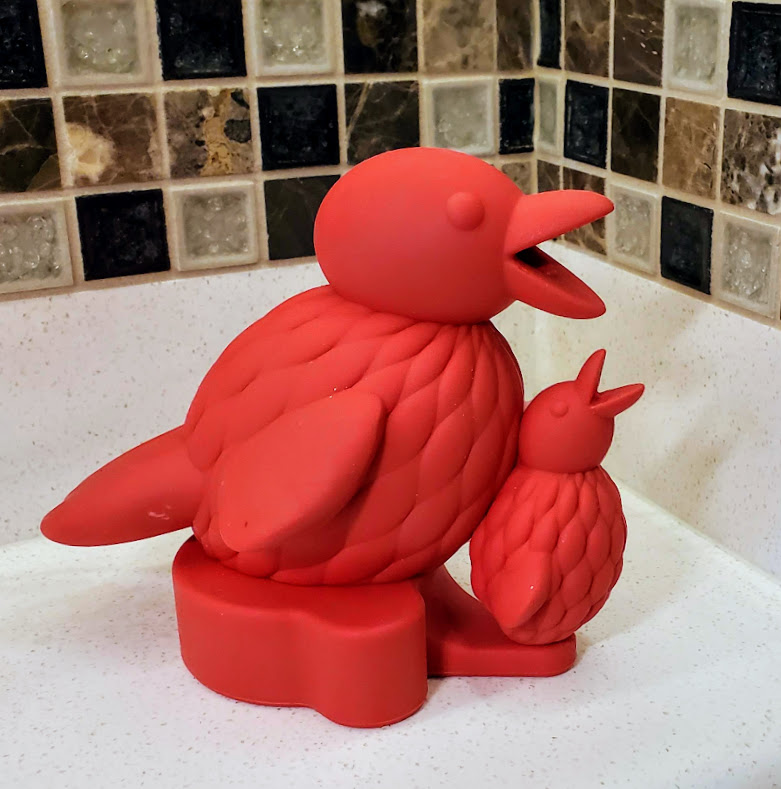 If you are an Instant Pot or Ninja Foodi user, you are probably concerned about all of the steam that is released during the pressure cooking quick release process and the potential impact on the woodwork.

By fitting over the vent, their product can be pointed to aim the steam in any direction. Being a former Instant Pot and now a current Ninja Foodi owner, as well as being a kitchen gadget person, of course I had to buy one (Amazon). Not only does it solve the problem but it also looks cute sitting on my counter too!  Awesome job, Debbie and Pat!

Several days after our arrival, Nancy (our favorite gourmet chef) once again satisfied our hunger pains with one of her delicious meals. Grilled lamb chops, grilled shrimp, chicken wings, roasted potatoes and a salad with green goddess dressing. All accompanied with her home made delicious chimichurri and mango sauces. 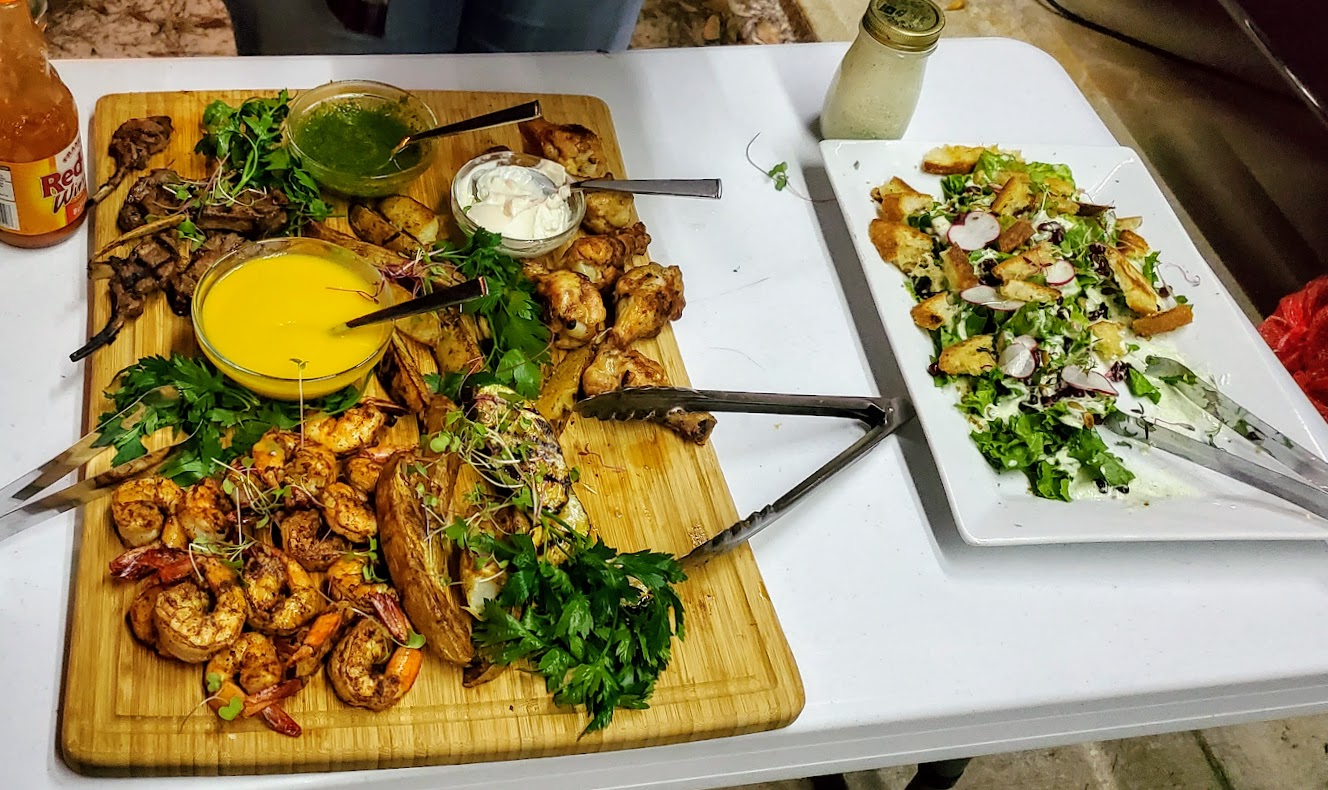 How she turns what seems to be a simple meal into a gourmet dinner is beyond me! Thanks, Nancy and Betsy, for your awesome hospitality!

Besides doing all the usual stuff we typically do at Topsail (socializing, walking down to the beach, stocking up on supplies, etc.) and a not so usual happening (a dentist appointment for me which fortunately turned out to be a sinus issue, not a tooth issue), we discovered a new restaurant that we really enjoyed. The Maple Street Biscuit Company in Santa Rosa Beach. 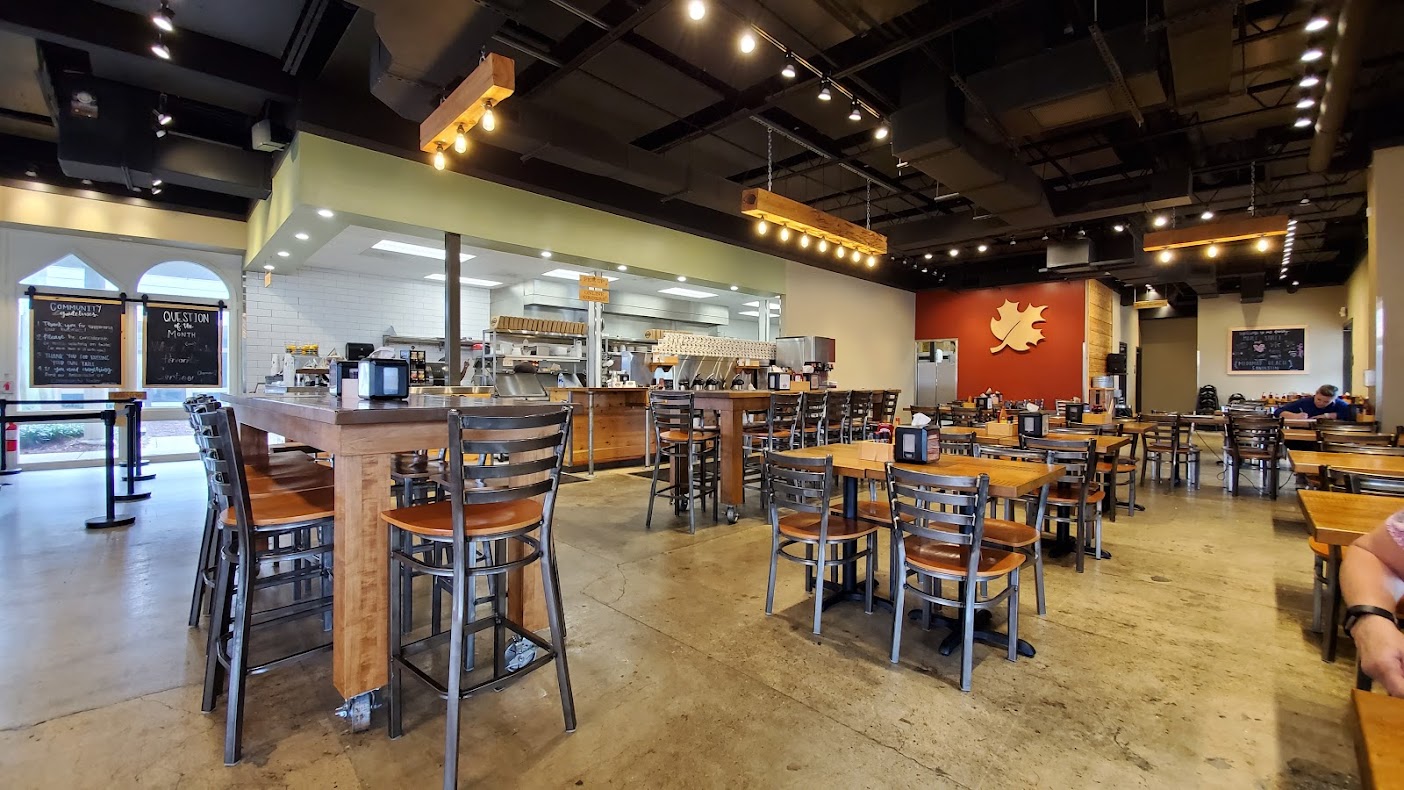 Maple Street Biscuit Company, has multiple locations in the south and offers “comfort food with a modern twist”. Everything here, the jams and jellies, the sausage gravy, the shiitake gravy, and of course the biscuits, is made from scratch on the premises. At the counter, I ordered an item that I learned later was featured on the Food Network. “The Squawking Goat” is a flaky biscuit, topped with an all-natural fried chicken breast and a fried goat cheese medallion and smothered in house made pepper jelly. Rob ordered “The Five and Dime”, which was a flaky biscuit topped with an all natural fried chicken breast, pecan wood smoked bacon, a fried egg and cheddar cheese covered with their house-made sausage gravy. So yummy and so huge, we enjoyed our leftovers the next day. The portions here are well beyond a “normal” breakfast so bring your appetite and/or plan on having leftovers. 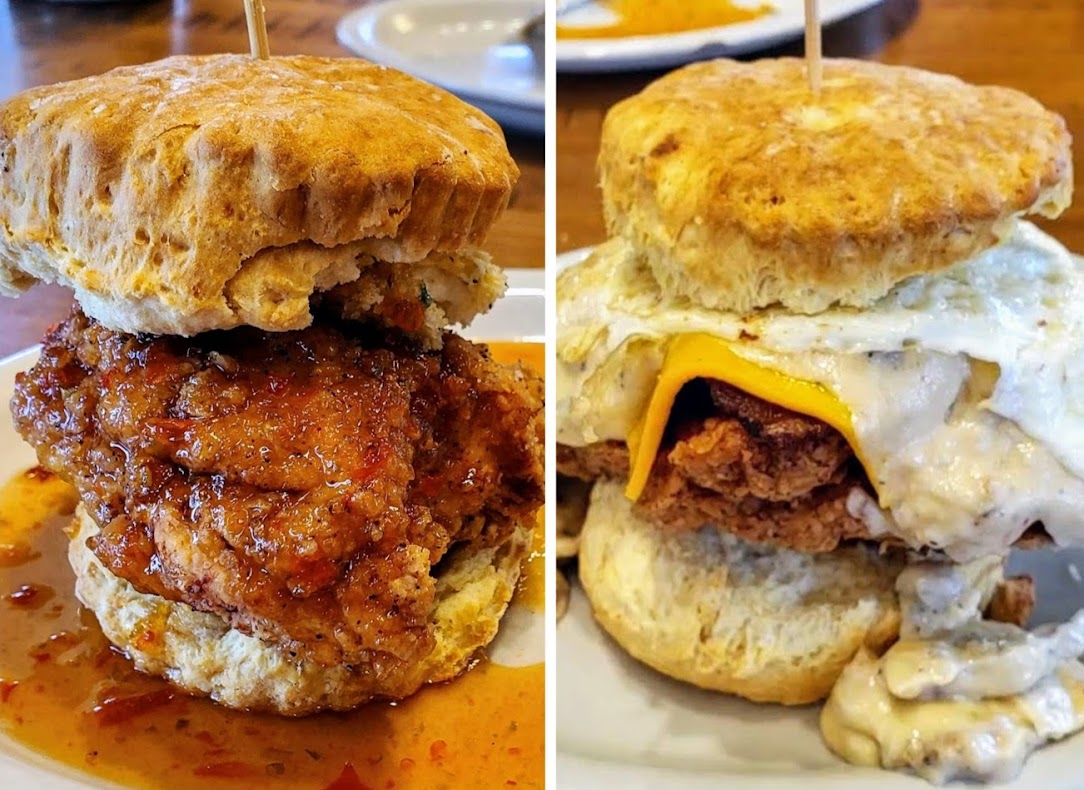 Our next déjà vu stop was just ten miles down the road, Henderson Beach State Park. Usually it’s a pretty straightforward drive, but due to the ongoing construction on US98, when heading west a left hand turn into the park entrance isn’t currently allowed (It’s been that way for well over a year). Instead we had to continue down the road a bit, then take a right hand turn thru a parking lot next to Jim ‘N Nick’s BBQ, then another right on Commons Dr. West followed by another right on Henderson Beach Drive. Whew! Driving straight across US 98, we would finally arrive at the park’s registration office. I wonder – will they ever be done with the construction on US 98??

We stayed on site #31 this time. Being an “eyebrow” pull thru (curvy loop parallel to the road), it took a little bit of juggling to get the coach in exactly the right spot. But once situated, we (and Sparky) loved this particular site. Surrounded by trees and native plants, it was extremely private. The only complaint we have about this park is the noise from the traffic on 98 and from the tour helicopters which fly overhead frequently. 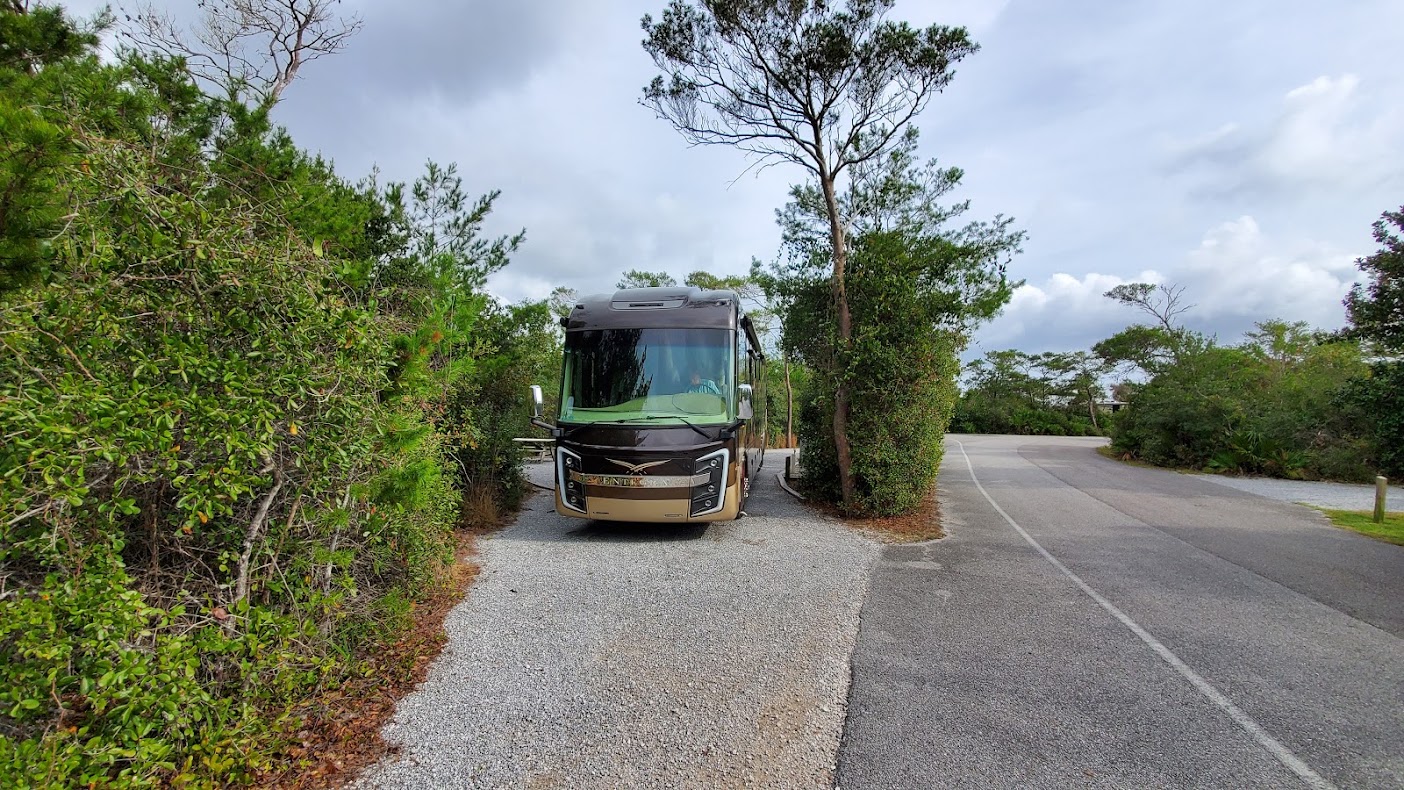 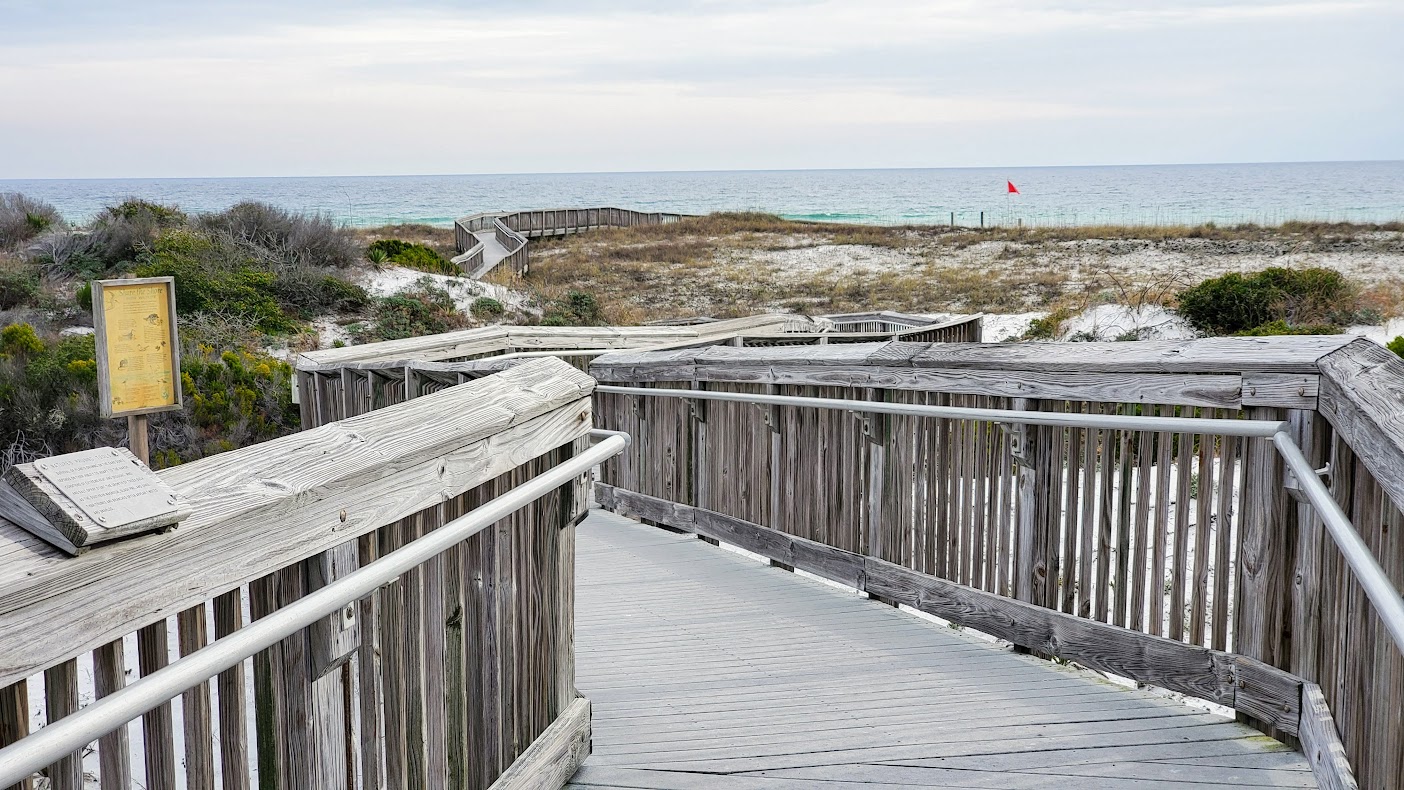 One big plus of Henderson is the relatively short walk to the beach, so we went frequently. Check out Rob’s “Sandpiper Overture” recorded on the beach here, make sure to crank up the volume:

When we left Henderson, it was time to say goodbye to Florida and hello to Alabama. Our next déjà vu stop would be in Spanish Fort, AL (just east of Mobile) at Meaher State Park where we had a waterfront site (#35) on Mobile Bay. 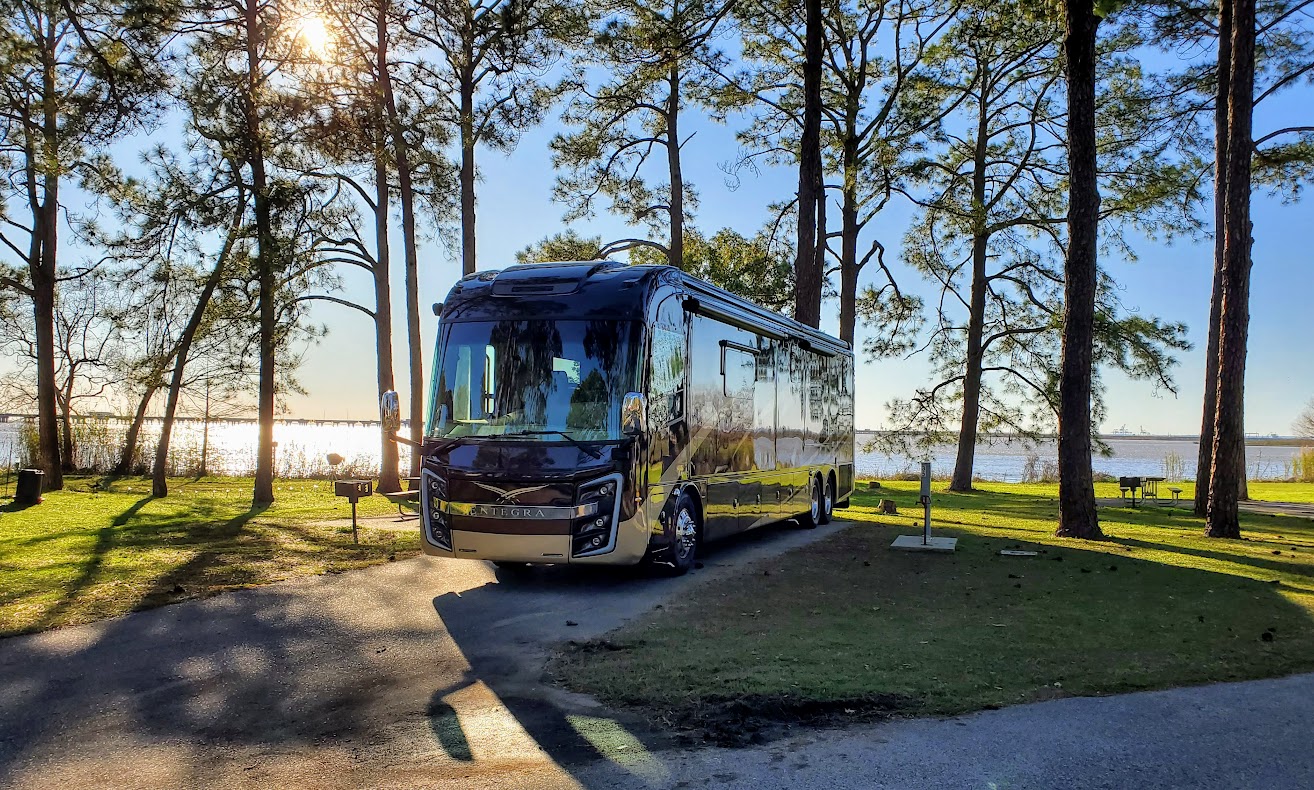 Weather was pretty chilly during our four day stay dropping below freezing one or two nights, but there was enough mild weather to take a walk to the delta where we stopped to talk with another couple, Ron and Sue Woods. Really nice folks! After our walk we invited them back to our coach. 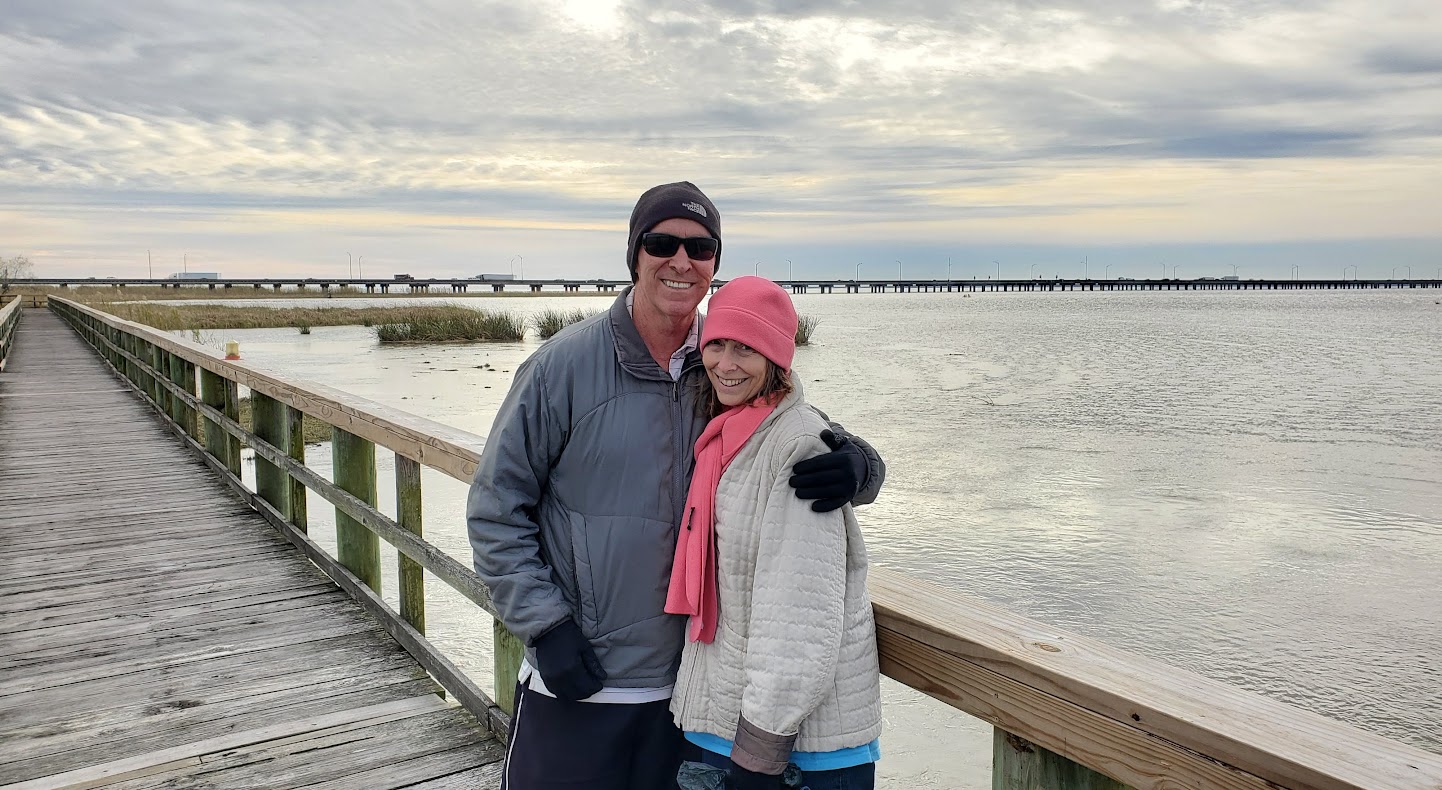 Our time in Spanish Fort also involved a visit to Sam’s Club to stock up on supplies and a revisit (more déjà vu, we were there back in April, 2019) to the East Shore Cafe in Daphne for breakfast where we both had the special, English Pair ($7.25), which was two English Muffin halves topped with bacon, scrambled eggs, tomato and cheese. Very good! 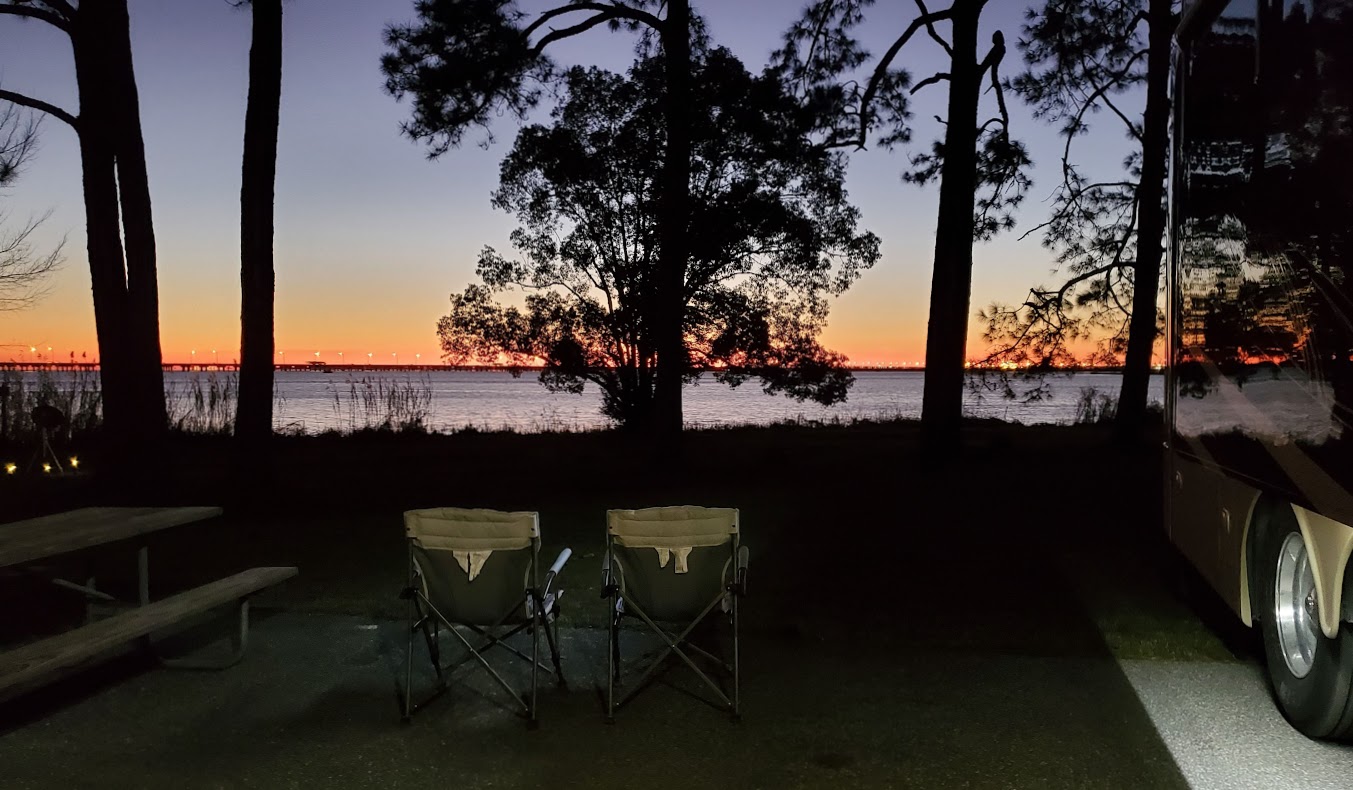 We were really looking forward to our next stop (also déjà vu).  To find out where that was you will need to stay tuned…