It was only March and already we were talking about heading back to RI, a month earlier than our usual mid to late April timeframe.  News of the pandemic was rapidly hitting the airwaves and to say we were getting a little nervous about travelling was an understatement. Some private and government run campgrounds were shutting down – reservations we had at several state and federal parks had already been cancelled due to mandated closures, resulting in our having to scramble to find somewhere else to stay.

Like so many others, our RV and boating lifestyles would change dramatically over the following months. All of the fun we would have learning about the culture, cuisine and history of a particular destination by visiting local attractions, museums and dining at local restaurants (darn, no more posts about how many eggs we had for breakfast) would be put on hold and replaced with our (and most people’s) new norm – quarantining, masking, social distancing, sanitizing/washing our hands, sanitizing everything we touched in the coach and the car, supporting local restaurants by ordering take out and using curbside pickup for groceries. But despite how cumbersome all that was, thankfully we didn’t need to worry about losing our jobs, our home or not having enough food on the table like millions of other people here and around the globe. Due to our age and a few medical issues, both of us are in the high risk group so our main focus was on doing everything we could to stay healthy.

As early as March, the majority of campgrounds had implemented new COVID policies. Bathhouses, swimming pools, fitness centers, rec halls, clubhouses were closed, masks and social distancing required, no outside guests allowed, and events cancelled. Plus new contactless check in policies had been implemented – call to make your reservation, pay using a credit card and when you arrive, pick up your package (usually a receipt, a campground map and a car pass) left on the outside of the registration office and proceed directly to your site. No need to see anybody.

Leaving Austin, we headed to our next destination where we would be for three nights, Stephen Austin State Park in San Felipe, TX, located just west of the Houston metro area. Once again the rate was $25 per night but we had to pay the $5 per day per person entrance fee so that added an additional $30 to the cost for a total of $105. 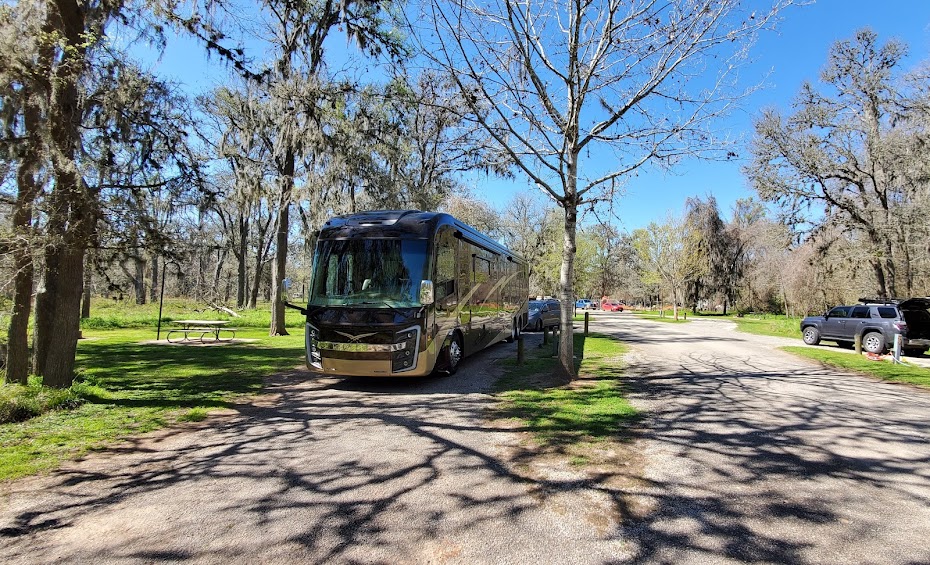 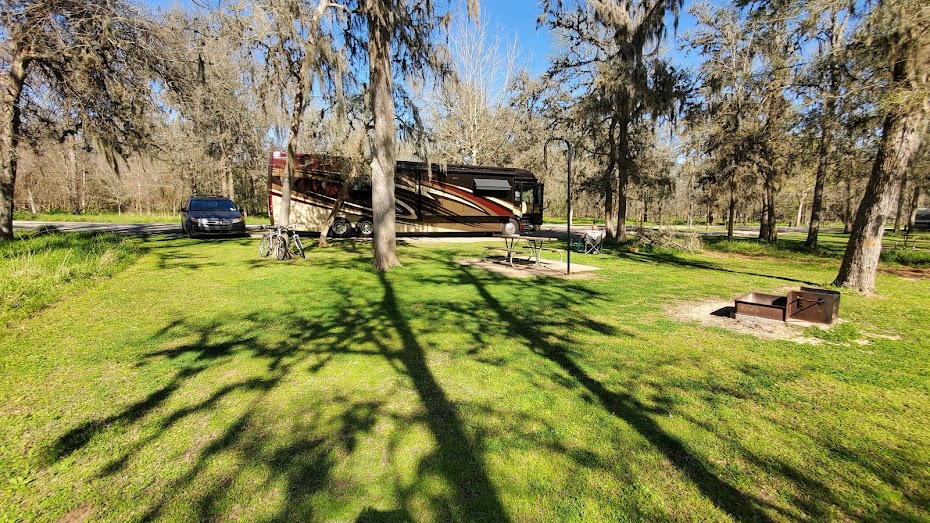 The 473 acre park offers 40 full hook-up, pull-through RV sites with water, 30-amp electricity and sewer, 40 tent sites with water only and 25 primitive campsites. With five miles of hiking/biking trails wander along the Brazos River and the nearby San Felipe de Austin State Historic Site which commemorates the location where, in 1823, Stephen F. Austin established a headquarters for his colony in Mexican Texas makes this a popular park.

For a one night stopover, we made reservations at White Oak Park in Lake Charles, LA, located on the west fork of the Calcasieu River, just 4 miles off Interstate 10. This parish park has eight concrete pad RV sites with electricity and four tent sites. Nice spot and only $12/night! 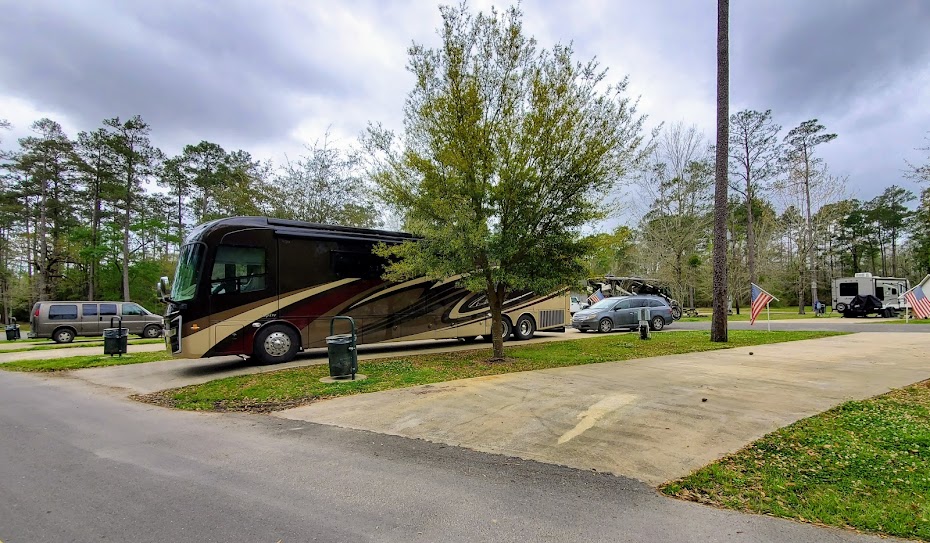 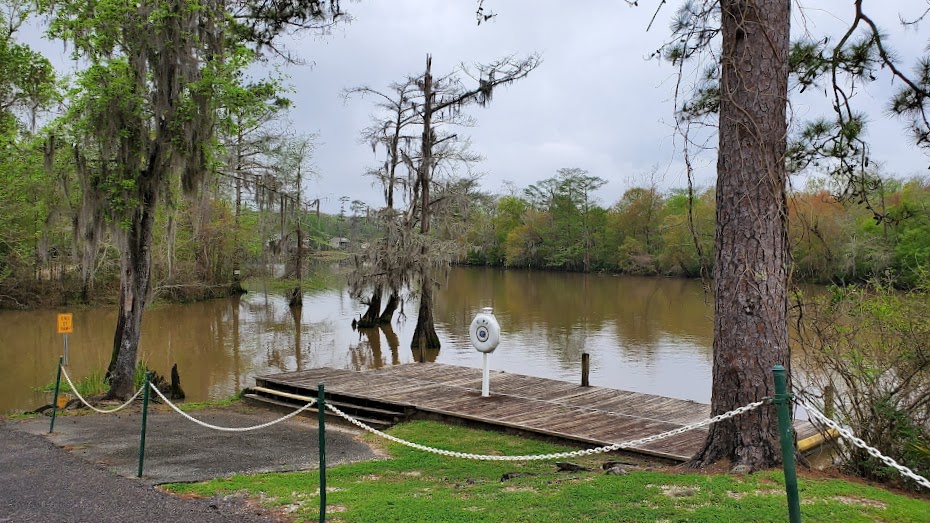 Our next stop was Reunion Lake RV Resort in Pontchatoula, LA, a resort we had stayed at in the past. We weren’t particularly impressed with the place due to a filthy firepit during that stay, plus it was a very family oriented place which we tend to avoid, and we even made the comment in a previous post that we probably wouldn’t stay there again. But we decided to go there anyway to meet up with our friends, Betsy and Nancy (RV-A-GoGo). Except for a socially distant and masked visit with them, it was a pretty quiet five night stay. 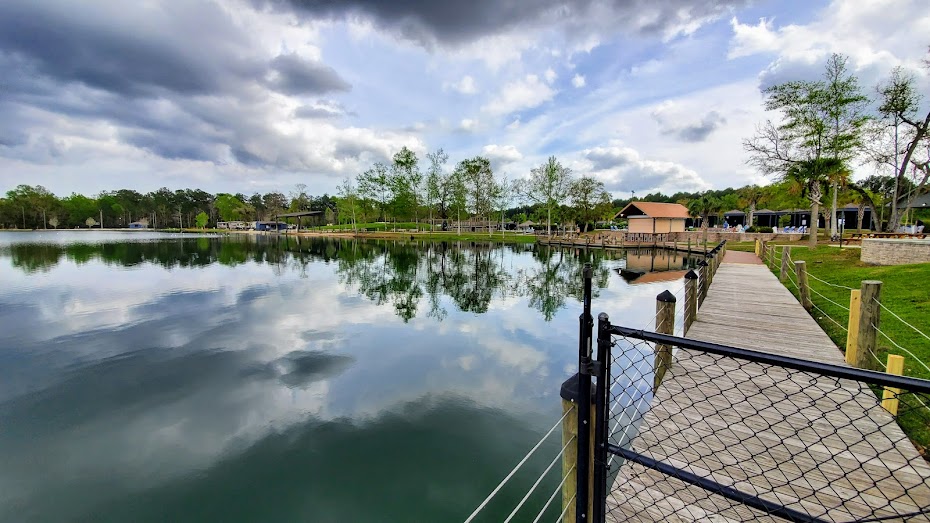 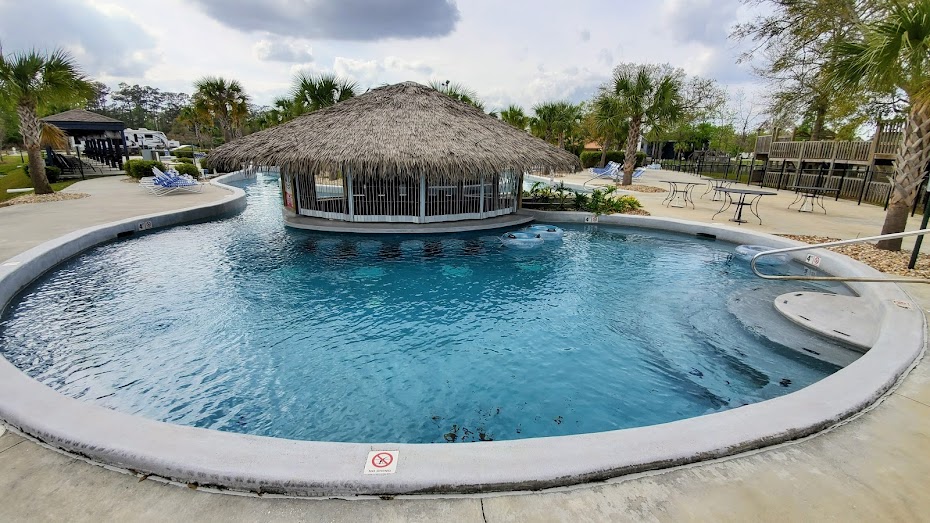 Pandion Ridge RV Resort in Orange Beach, AL was our next destination where we had a reservation for a week. Lovely resort! It will be really nice once the trees mature. 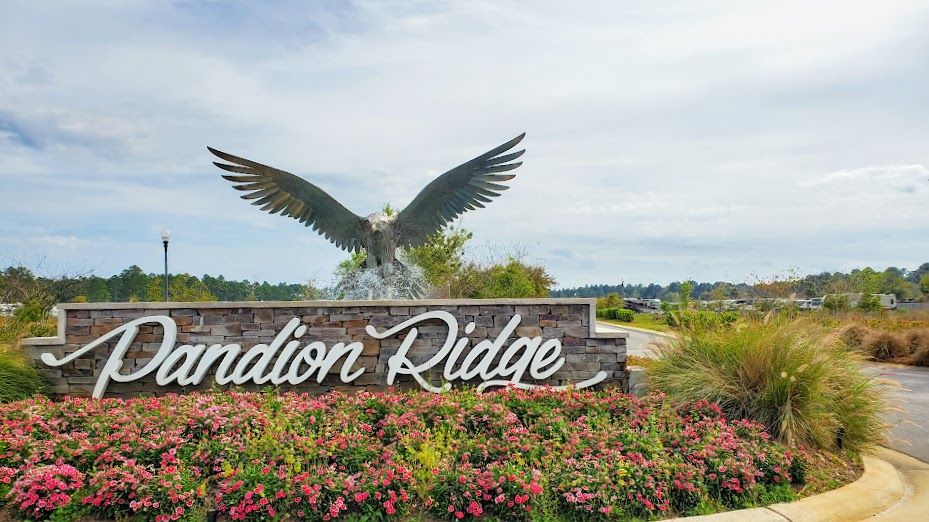 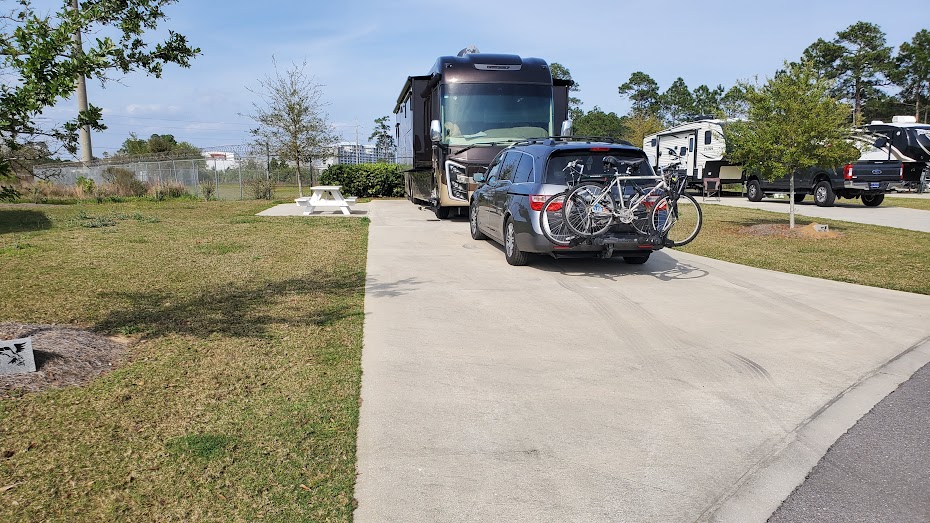 With its beautiful beaches, bike trails and wonderful restaurants, this area has always been one of our favorite destinations since we first began RV’ing back in 2011.

Our stay this time though would be much different. Rob would ride a portion of the Hugh S. Branyon Backcountry Trail. 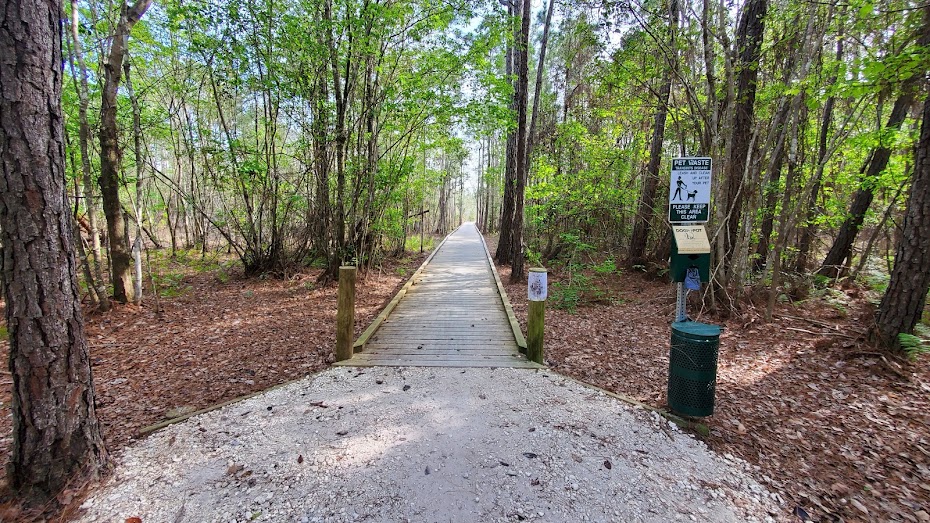 And we could still maintain social distancing taking a walk along the water. 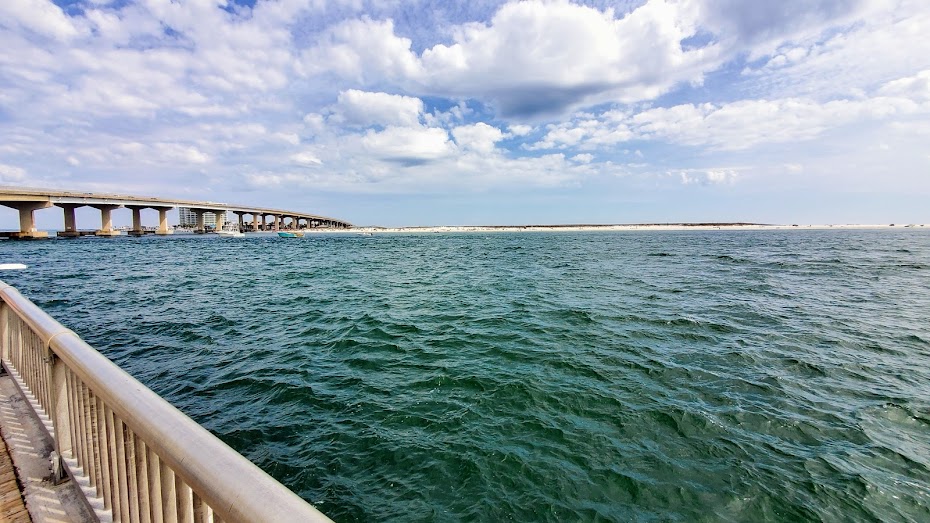 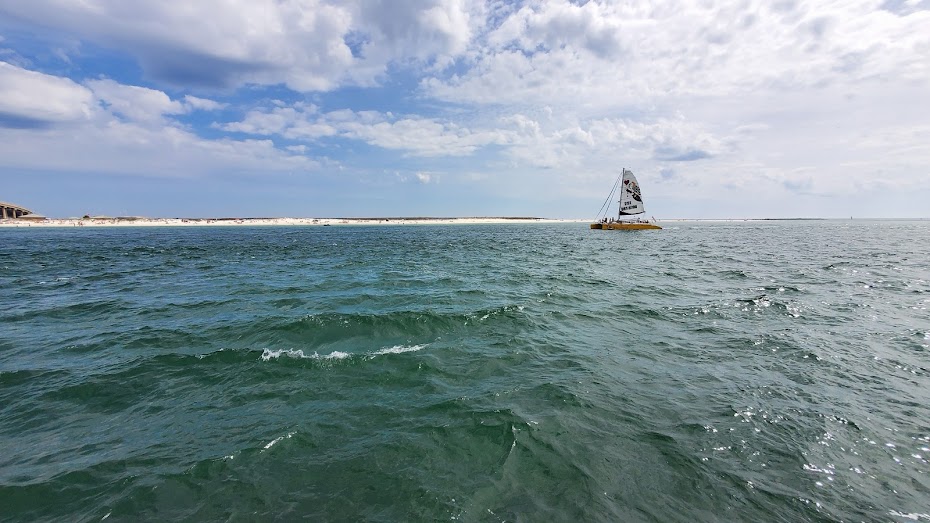 But by this point in time, sadly dining out was no longer an option for us. 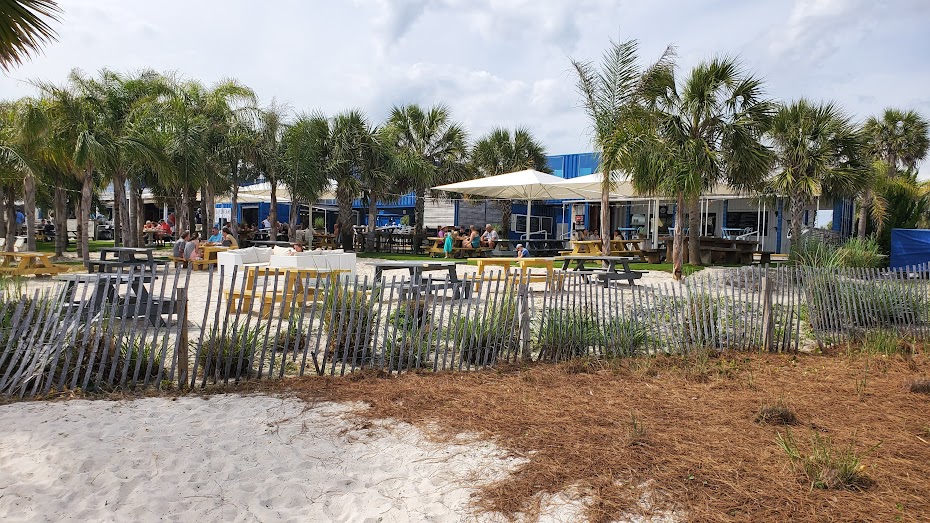 By now it was mid-March and future reservations at some FL State Parks and Federal COE parks had been abruptly closed and our reservations nulled. With that, plus our anxiety about the pandemic growing, we decided to shorten our week long stay here to five nights and start heading back north. Fortunately, this resort is owned by Sun RV Resorts which had recently implemented a new policy. Due to the fact that many of their amenities had been closed, visitors would be issued refunds for early departures or cancellations.

We cancelled our week long reservation at Meaher State Park in Spanish Fort, AL as this was one of the few that did not close by state or government mandate. No refunds given but they do give a credit for the one night stay deposit which must be used within a year.

Overnight stays at Montgomery South RV Park in Montgomery, AL (OK for an overnight) and Will’s Creek RV Park in Fort Payne, AL (pretty nice, might be a good base to explore the area) were next during our journey. 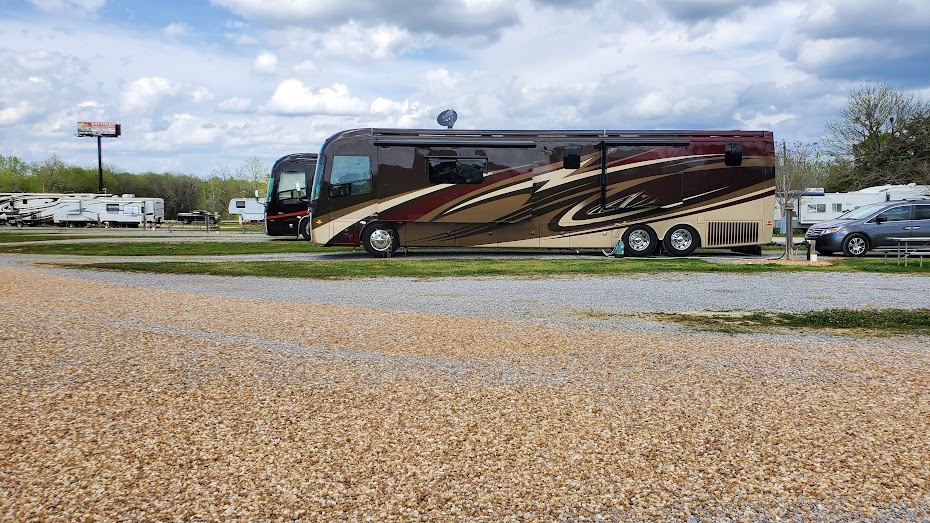 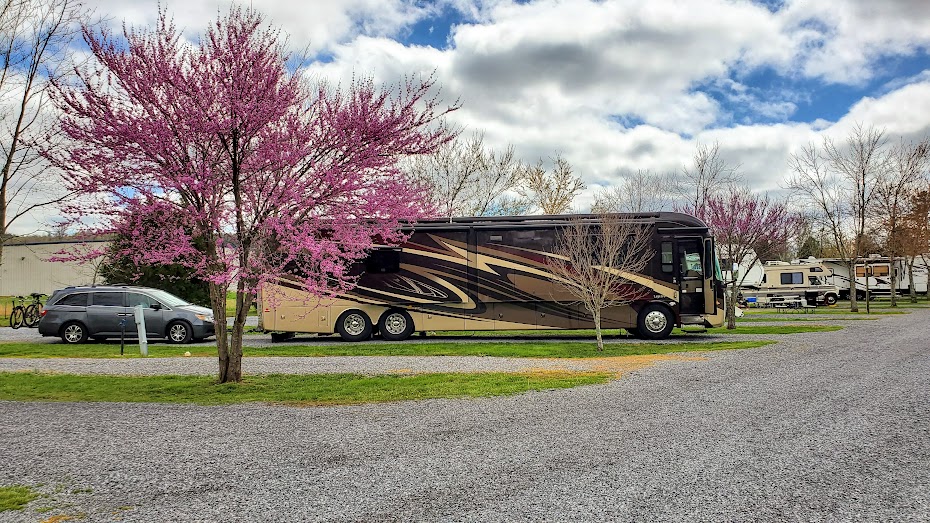 Tired from being on the move for three days straight, we decided to take a three night break at Two Rivers Landing RV Resort in Sevierville, TN. This would give us a chance to not only catch our breath but to restock supplies as well (curbside pickup at Walmart). Lovely resort with 55 sites (25 riverfront, 30 riverview), located on the Broad River. We had a riverfront site with a lovely view of the river. 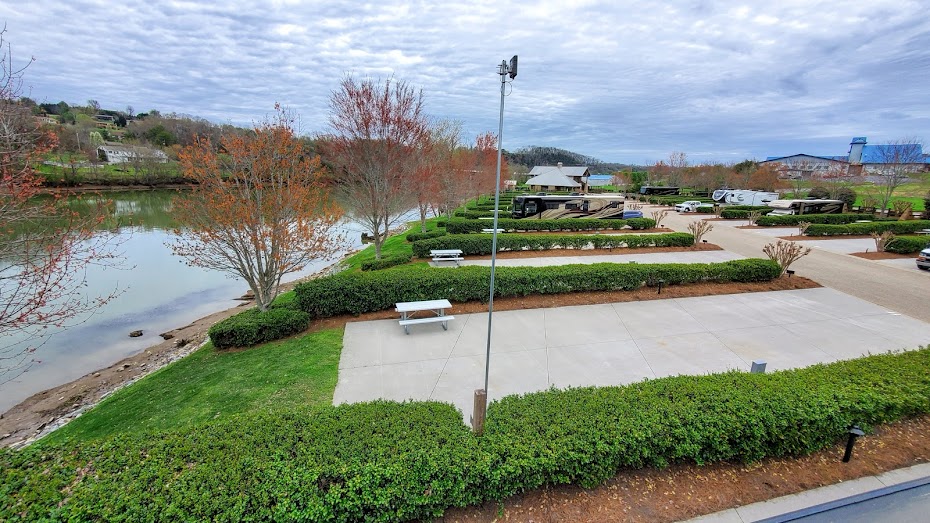 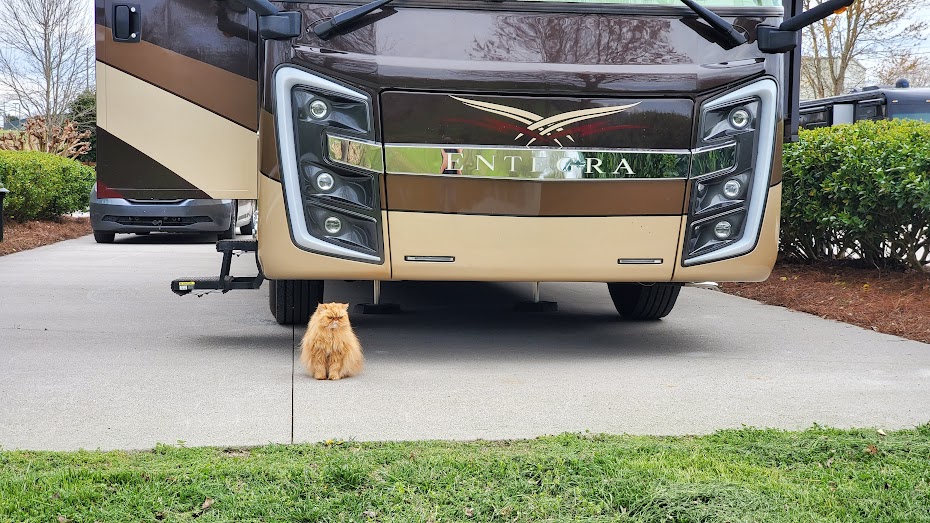 During our stay, we did a bit of sightseeing, taking a drive over to the Tennessee River Valley Douglas Dam and Reservoir and checking out another RV Resort, Anchor Down RV Resort in Dandridge, TN which looked like a decent place to stay. 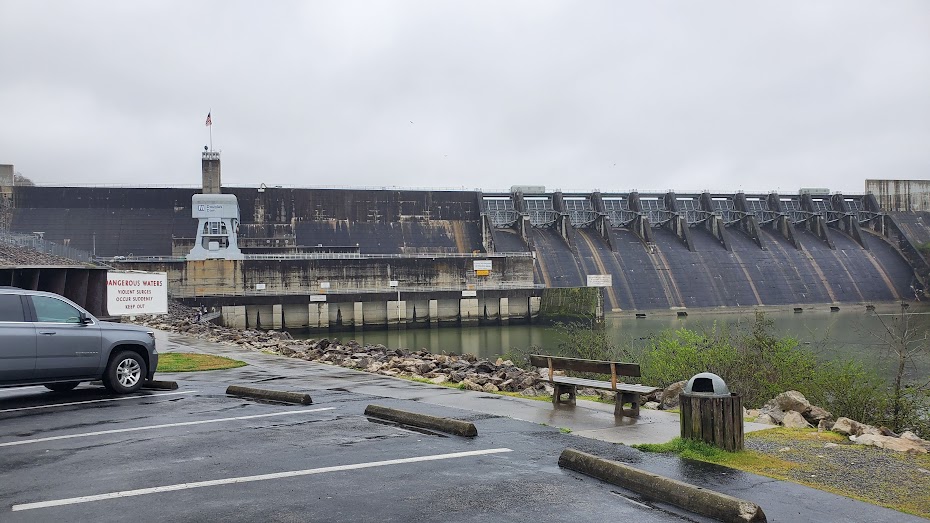 Leaving there, we were excited that we only had three more stops until our arrival in RI. 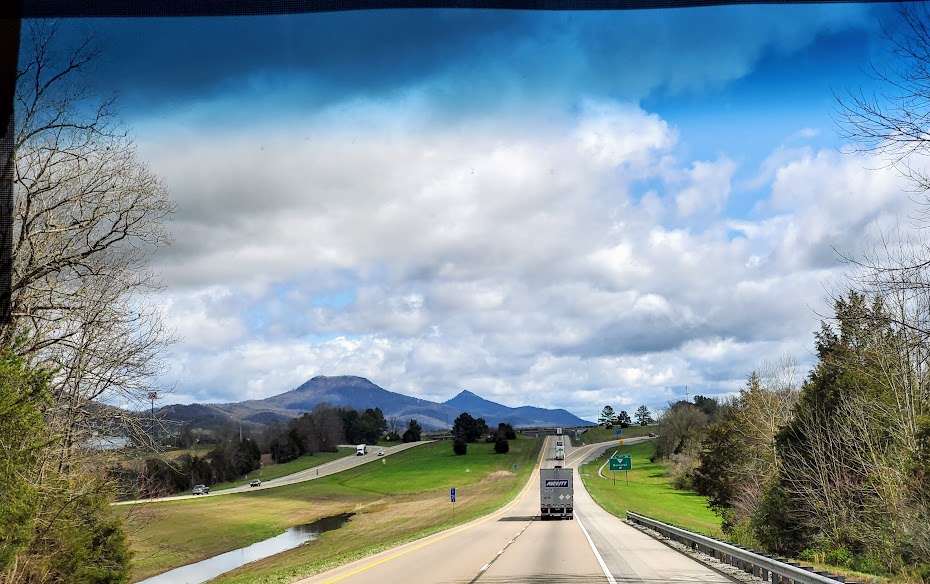 Fort Chiswell RV Campground in Max Meadows, VA, where we had stayed in 2014 was our next stop. This place is a popular overnight stop and very busy although despite some picturesque surroundings it is a bit of a dump. 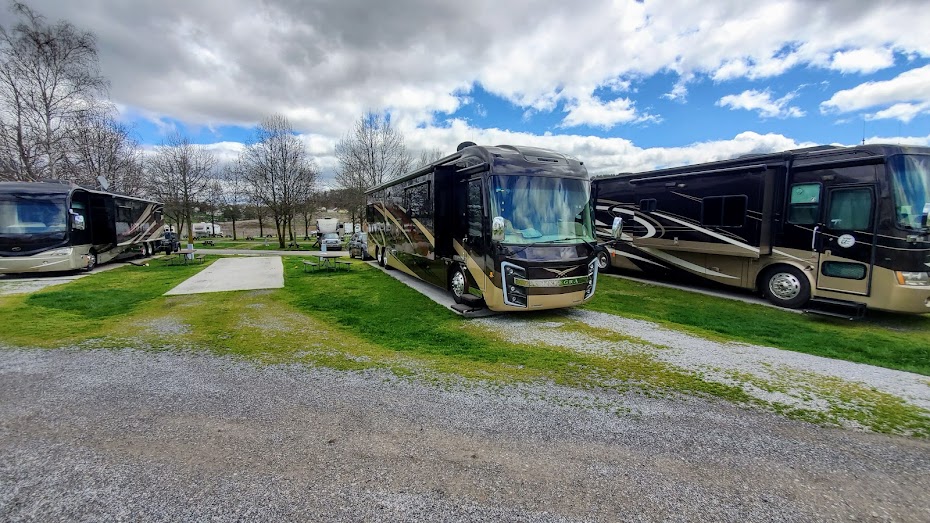 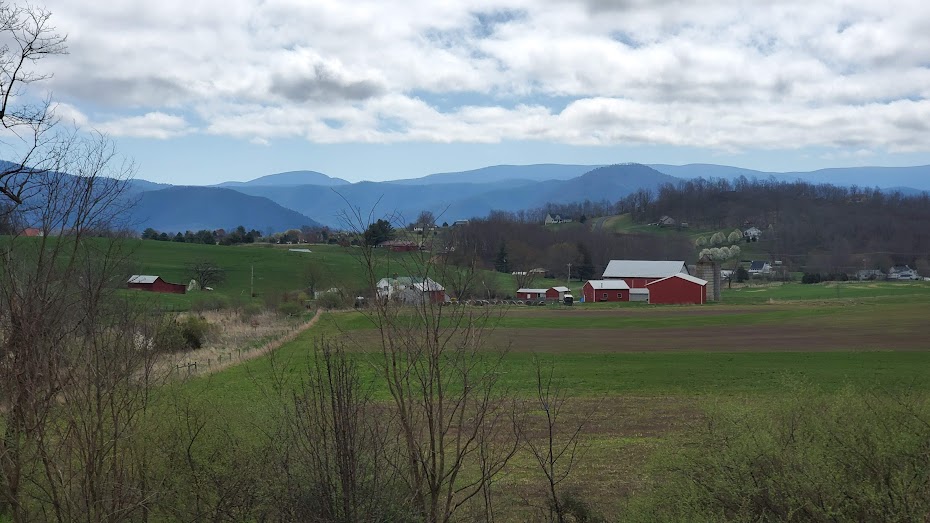 That was followed by overnight stays at Shenandoah Family Campground in Mt. Jackson, VA which was quite nice. 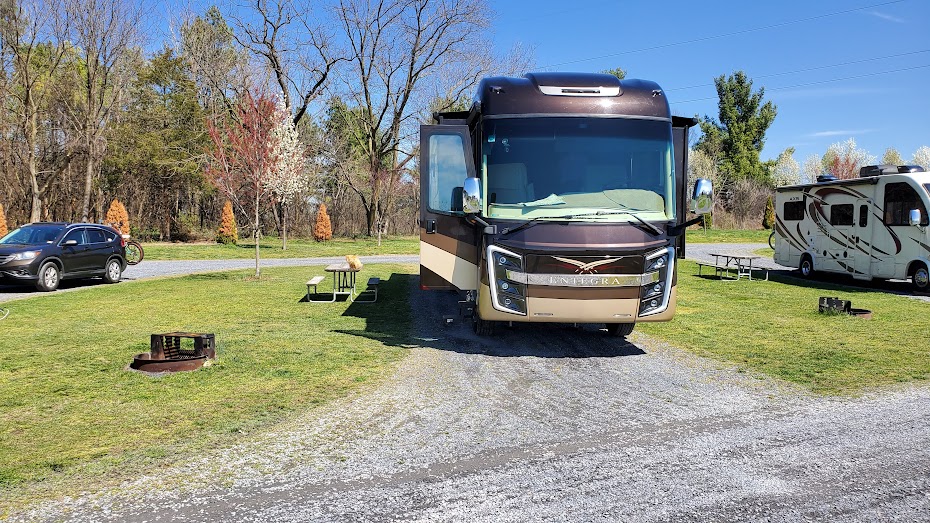 And Twin Grove RV Resort in Pine Grove, PA which ha some nice sites in the A section. 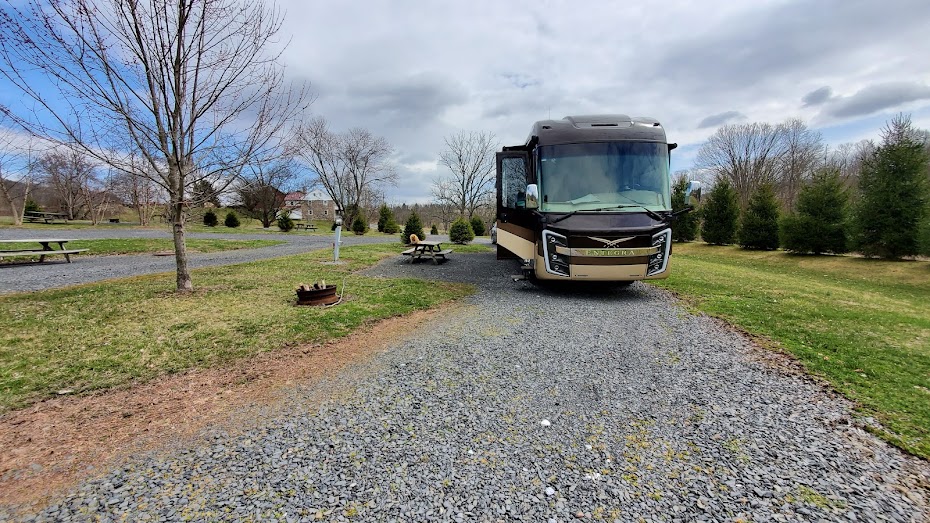 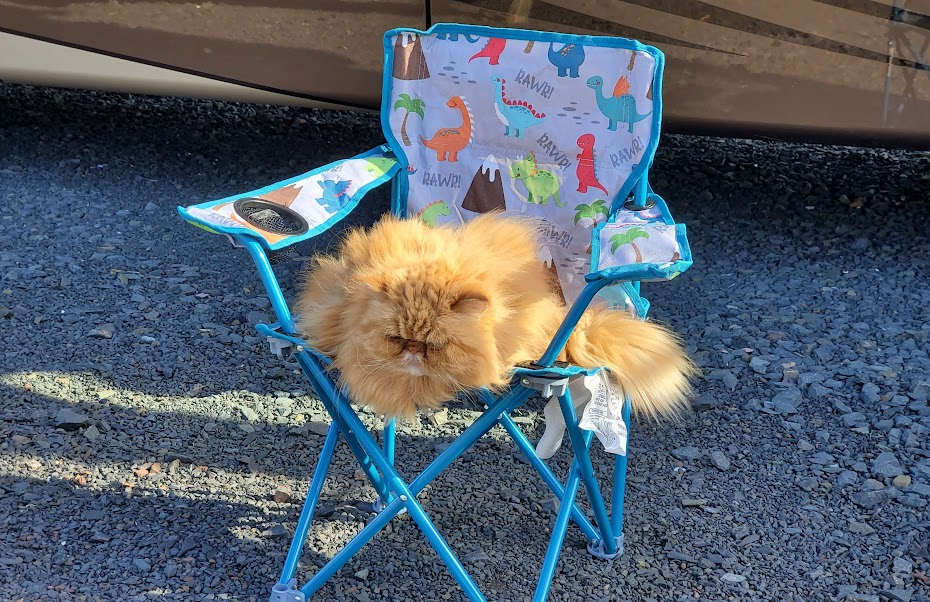 After a very long, five hour drive we finally pulled into Sun Valley on March 28th. Boy, did it feel good to be “home”. Time to put on our boating hats!