Leaving the 36th President and Fredericksburg behind, we headed for our next destination – McKinney Falls State Park, located thirteen miles outside of Austin, TX. McKinney Falls is a 641-acre state park featuring over 80 campsites, including developed RV as well as primitive hike-in sites.  A 100′ long, pull thru site (#14) would be our home base for four nights. 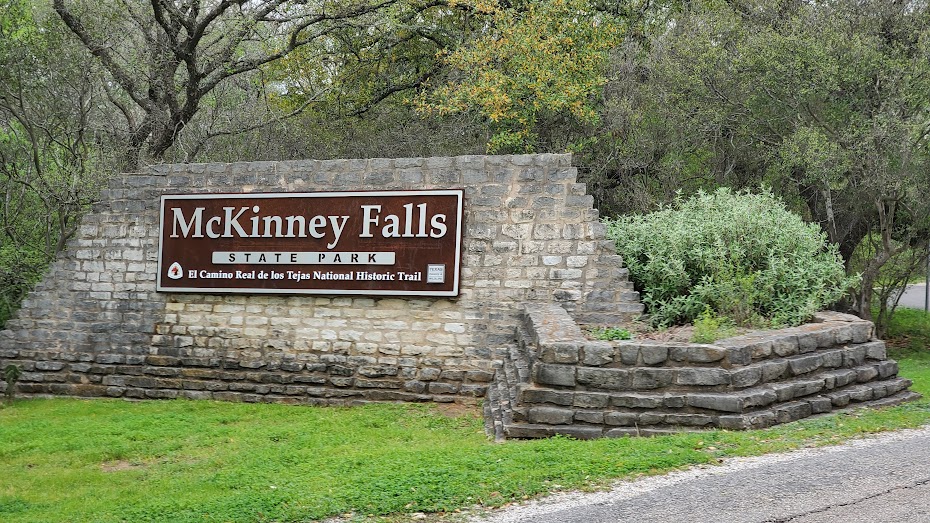 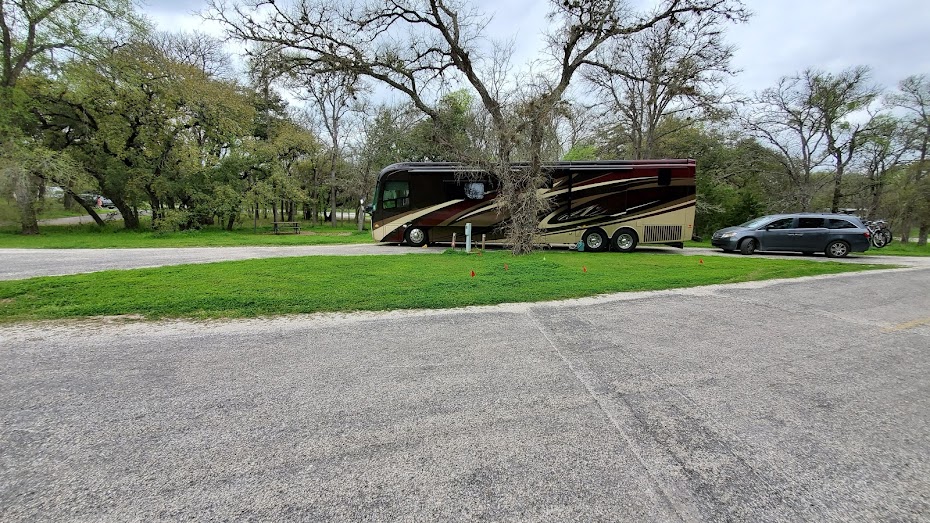 During our travels through Texas, we have usually avoided staying at their state parks. Curious as to why? The nightly rate for the campground seems at first glance to be relatively inexpensive ($24). However, Texas charges the daily entrance fee ($6 per person per day) even if you are staying in their campground (unlike many other states which waive the entrance fee). So the actual nightly rate was $36 for an electric/water (no sewer) site which is comparable to a private park that offers full hookups. To avoid that extra charge, purchasing an annual Texas pass for $70 could provide some significant savings. In this case a stay of 6 nights would break even and the $70 would be worthwhile. If you are a resident, a Texas Parklands Pass (free) provides seniors over 65 or disabled individuals to take advantage of a 50% discount. 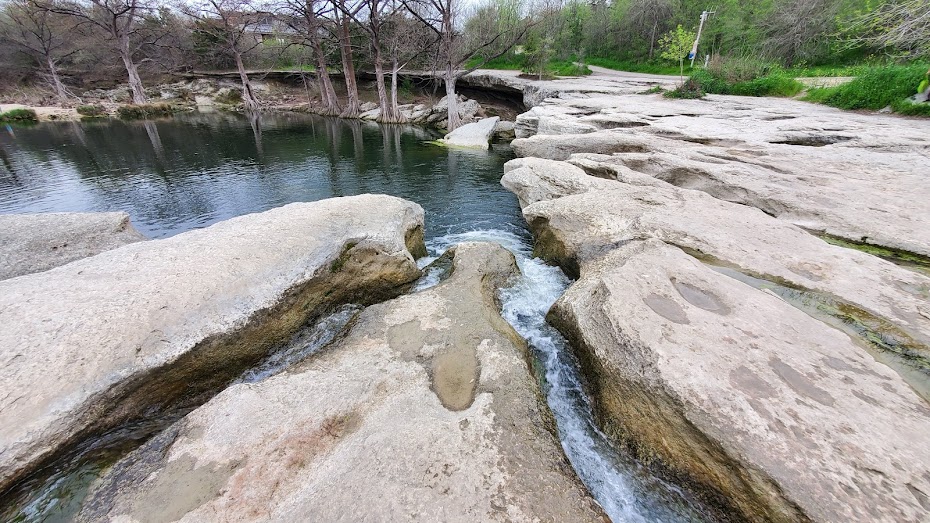 Despite the price, we opted to stay at this park due to its proximity to the city and its natural setting. McKinney State Park has over nine miles of trails including the paved Onion Creek Hike and Bike Trail. Unfortunately, after all of the busy-ness of our stay in Fredericksburg, we didn’t have the ambition to explore any of the trails.

Not being lovers of big cities, we were even reluctant to explore the city of Austin, but the day before our departure the weather was perfect and we are so glad that we did! Guess we expected it to be a prairie like landscape similar to Dallas where we had been several times during our work careers. What we found instead was a city of hills, beautiful lakes and lots of greenery!

As we drove down Congress Ave in downtown Austin, the Capitol Building majestically loomed in front of us. 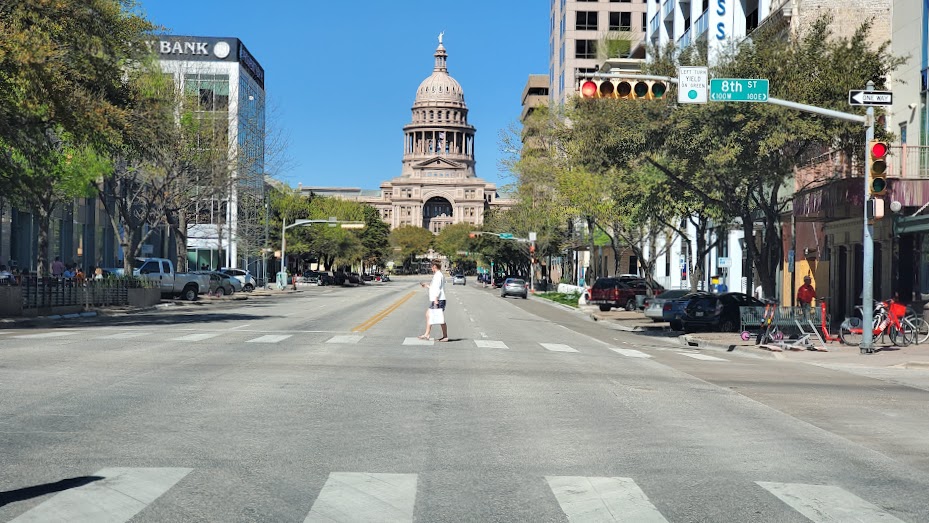 Constructed from 1882 to 1888 and standing at 302 feet tall, makes it the sixth tallest state capitol and one of several that are taller than the Capitol Building in Washington, D.C., it was pretty impressive. The Italian Renaissance Revival style capitol was added to the National Register of Historic Places in 1970 and recognized as a National Historic Landmark in 1986.

After parking the car, we walked to the Capitol Building Visitor Center (check out this YouTube video). Built in 1856-1857 to house the Texas General Land Office, this agency was responsible for overseeing all state-owned land. Over the years, the office expanded which resulted in the office moving across the street to a new building in 1918. From 1918 to 1989, two museum collections of the Daughters of the Republic of Texas and the United Daughters of the Confederacy were housed in the former Land Office. After falling into disrepair by the 1980’s, the Texas Preservation Board undertook a major renovation of the building, reopening it as a Visitor Center in 1994.

What wonderful and informative exhibits! One of the displays was a replica of the Capitol Building. It was so perfect – imagine our surprise when we read that it was built using 65,000 authentic Lego pieces (no custom made pieces). Be sure to watch this fascinating video about how it was built (and how some sections of it fell apart when transporting it to the Center). Standing at over 50 inches high, 62 inches wide, 102 inches long and weighing 145 pounds, it took the Texas Lego Users Group (TexLUG – who knew?) over 18 months to design and four months for to build the model. Wow, totally awesome! 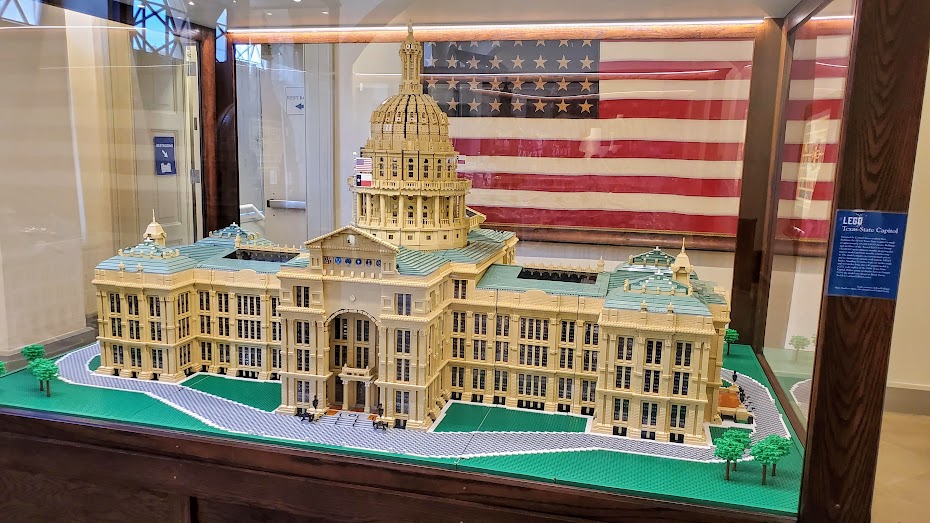 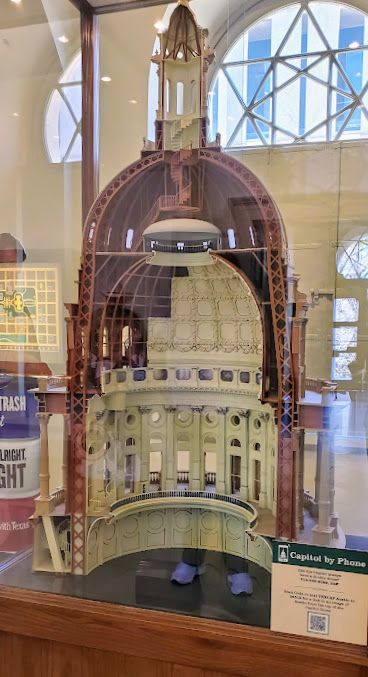 It was here that we learned about the Goddess of Liberty, a 16 foot high statue made of iron and zinc, weighing 3000 pounds, with a sword of justice in one hand and a gilded Lone Star in the other. She was hoisted in pieces to the top of the dome in 1888. In 1985, due to signs of significant deterioration she was removed and restored. She now resides at the Bullock Museum. A replica made of aluminum and weighing 1000 pounds less is now perched atop the dome.

Have any of you read any of O. Henry’s short stories? My favorite has always been the Gift of the Magi. Here’s an interesting fact – O. Henry was the pen name of William Sydney Porter, who worked as a draftsman for three years at the Land Office Building where he drew county maps and received a salary of $100 per month. Porter later used the Land Office Building as a setting for two of his stories, Bexar Script 2692 and Georgia’s Ruling.

After leaving the Visitor Center, since it was such a lovely day we wandered the grounds heading towards the Capitol Building appreciating the beautiful landscaping. Free tours were available of the Capitol but we had plans to meet friends later in the day so we were under time constraints. 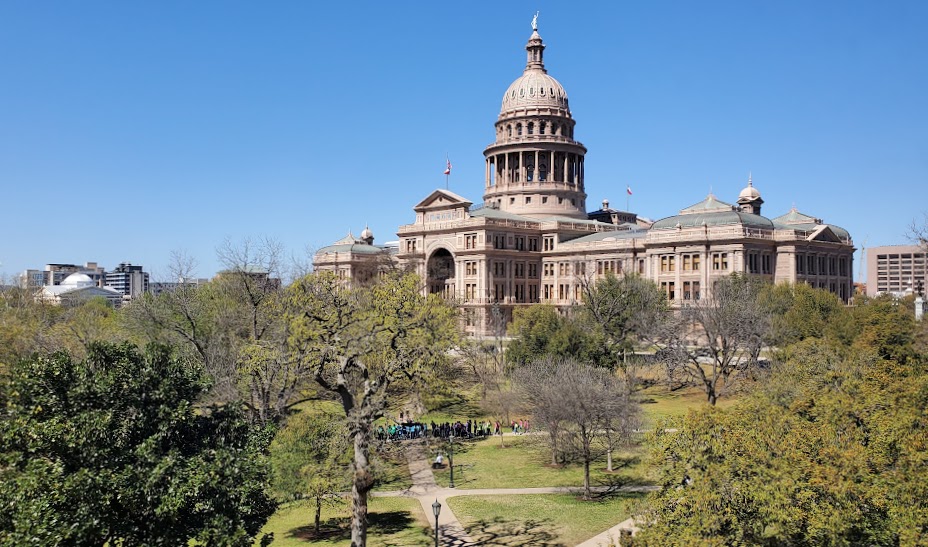 Leaving downtown we headed towards Lady Bird Johnson Lake and the Colorado River. Realize that this is NOT the same Colorado River that flows through Arizona, Utah, and other western states. At over 800 miles long, the Texas Colorado River is one of the longest rivers to start and end in the same state. 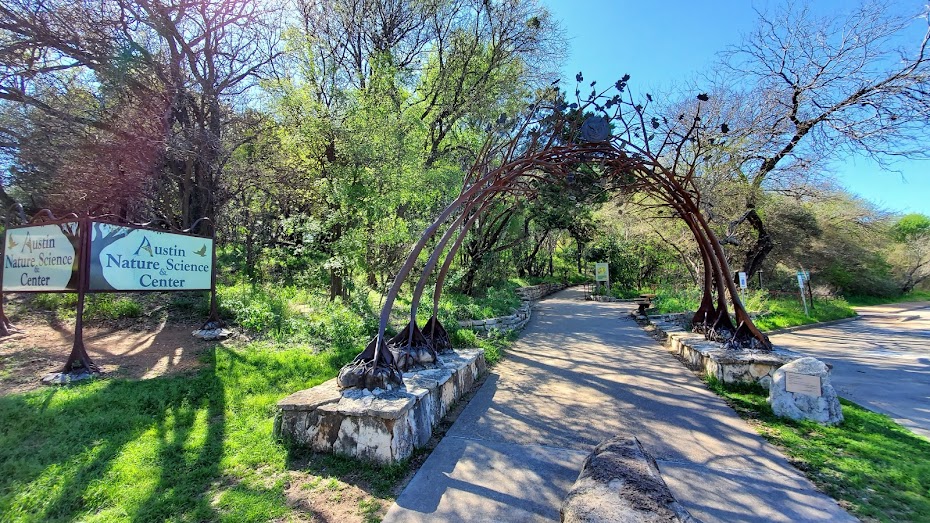 Looking like there were pretty views of the city skyline from the Austin Nature and Science Center, we parked and wandered around the grounds. Although we didn’t go into any of the buildings, it looked like a fun place for kids to visit.

Across the street, we could see a paved trail underneath a bridge that spanned the Colorado River.  Signs identified it as the Roberta Crenshaw Pedestrian Walkway which runs under the MoPac highway near Zilker Park and is part of the 10 mile Ann and Roy Butler Hike and Bike Trail. 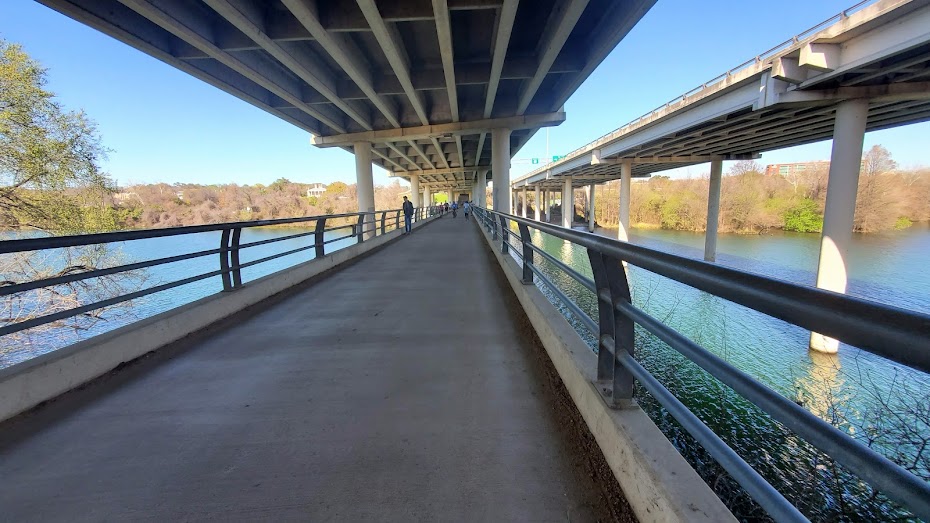 Roberta Crenshaw was an American civic leader and philanthropist who campaigned for over 60 years to preserve parkland in Austin and supported Austin-area cultural institutions. Roy Butler was mayor of Austin in the 1970’s. He and his wife, Ann, along with Lady Bird Johnson and others were instrumental in the beautification of what was formerly known as the Town Lake Hike-and-Bike Trail (renamed in 2011). Such a lovely trail – wish we had had more time to explore it.

Leaving this area, it was a scenic drive to The Oasis on Lake Travis where we were to meet our friends, Pat and Debbie and their new friend, Sonya, from Australia. 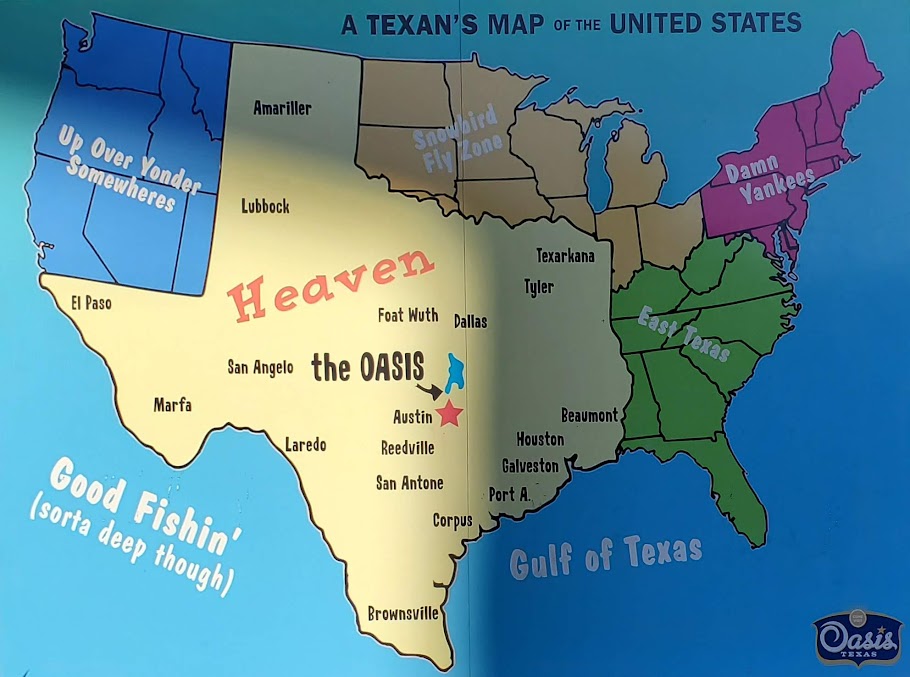 We had heard about The Oasis in the past but we weren’t prepared for what we were about to experience! 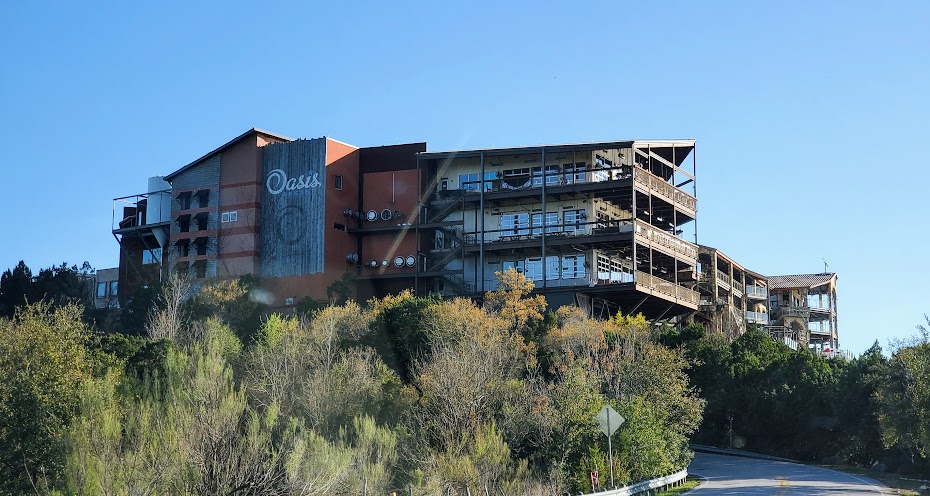 Built in 1982 by Houston entrepreneur Beau Theriot, the sixty five thousand square foot multi-venue shopping, entertainment and dining complex sits on a bluff 450 feet above Lake Travis’ southeast shore. Promoting itself as the “Sunset Capital of Texas”, it is the largest outdoor restaurant in Texas.

Totally hard to describe this place in words, perhaps it would be best to let the photos do the talking! 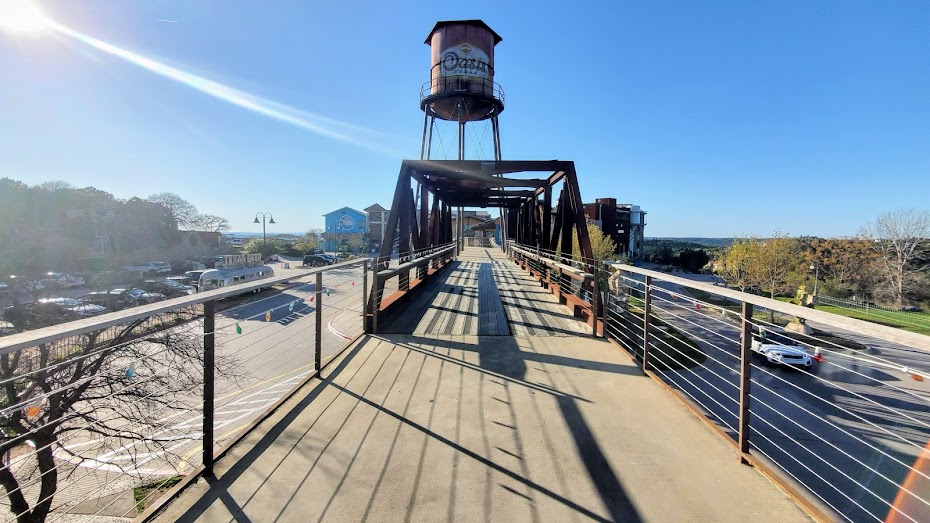 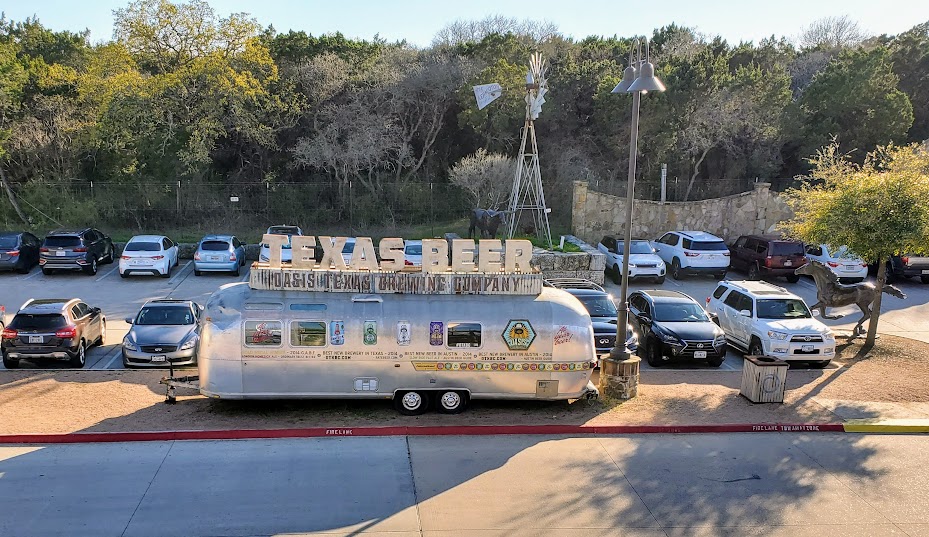 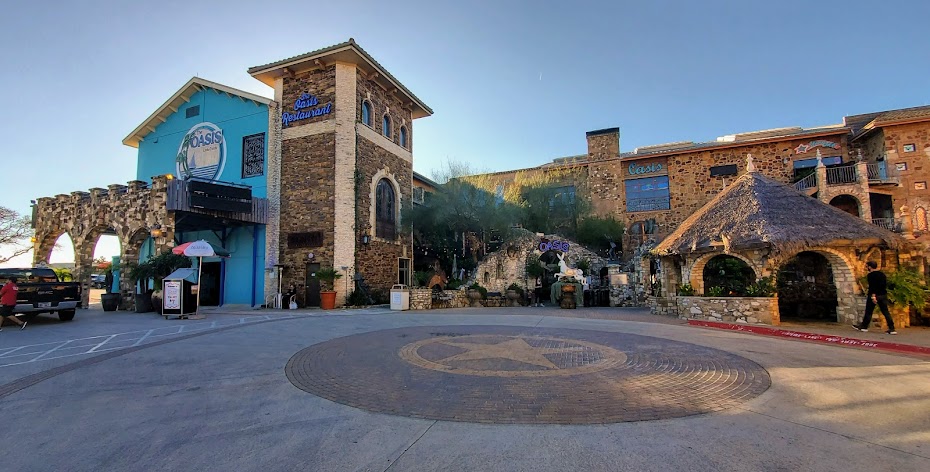 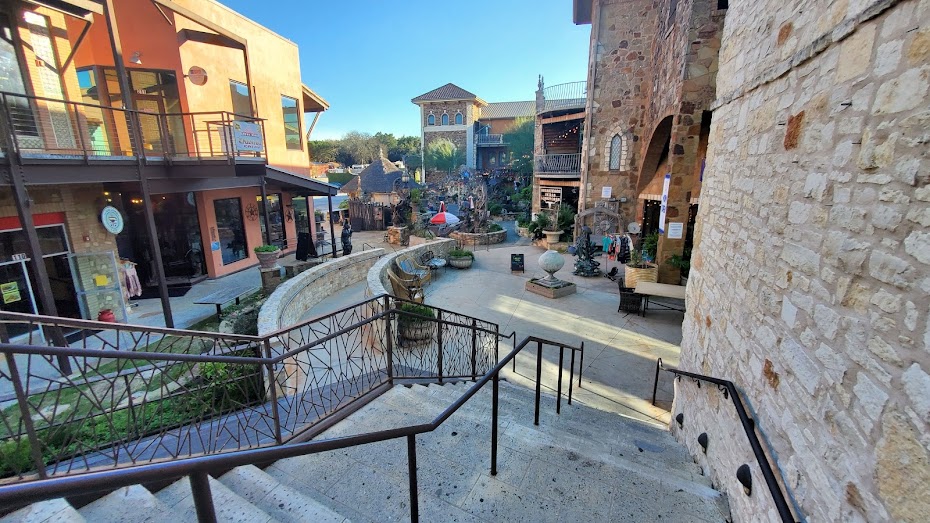 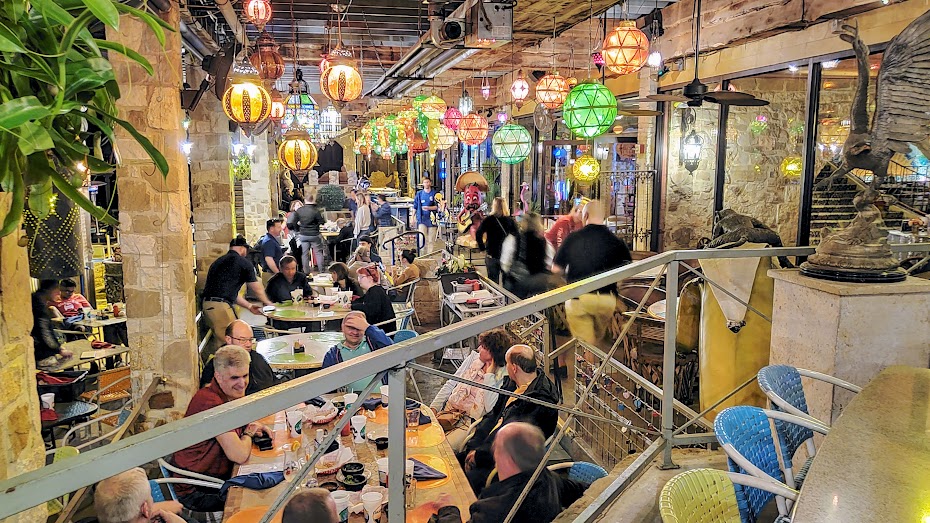 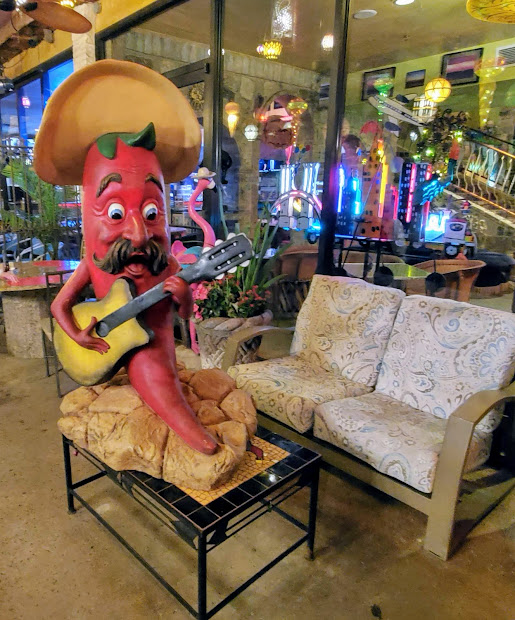 Arriving there early before our friends and the dinner crowd arrived, we were able to snag a table on the deck. 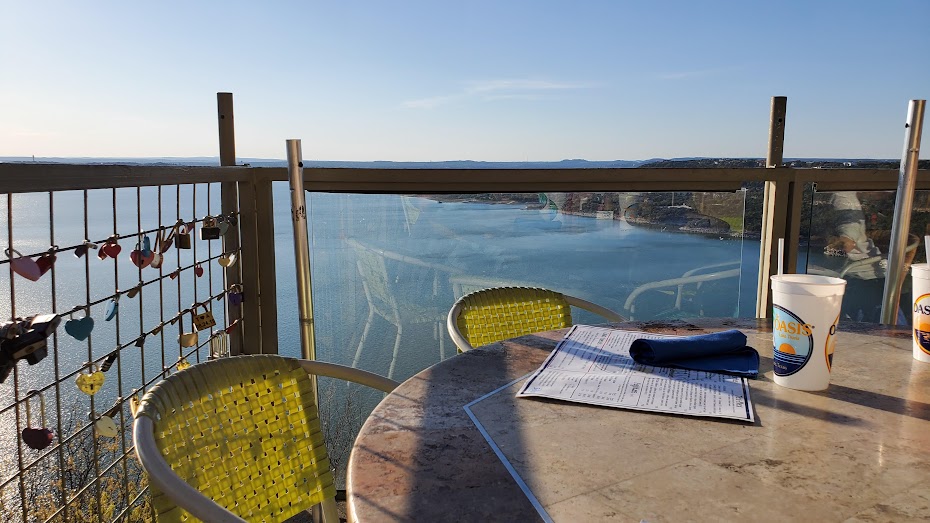 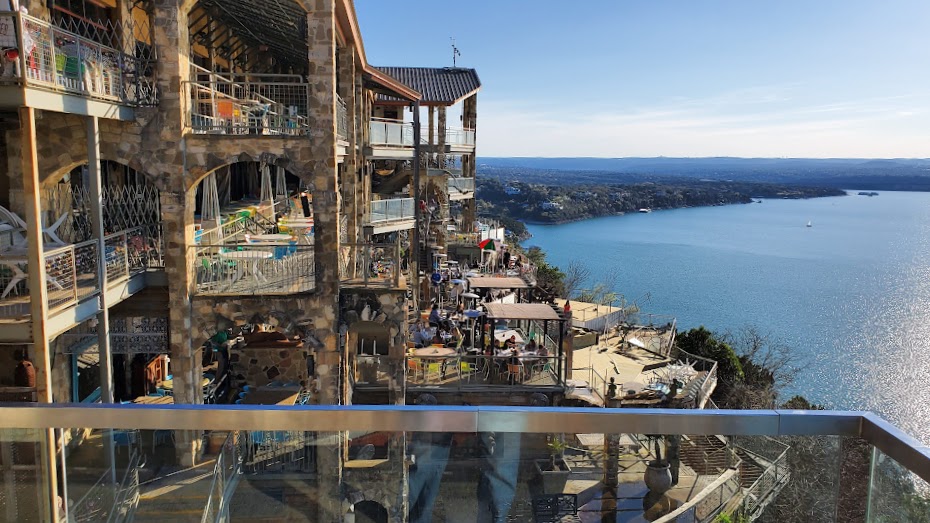 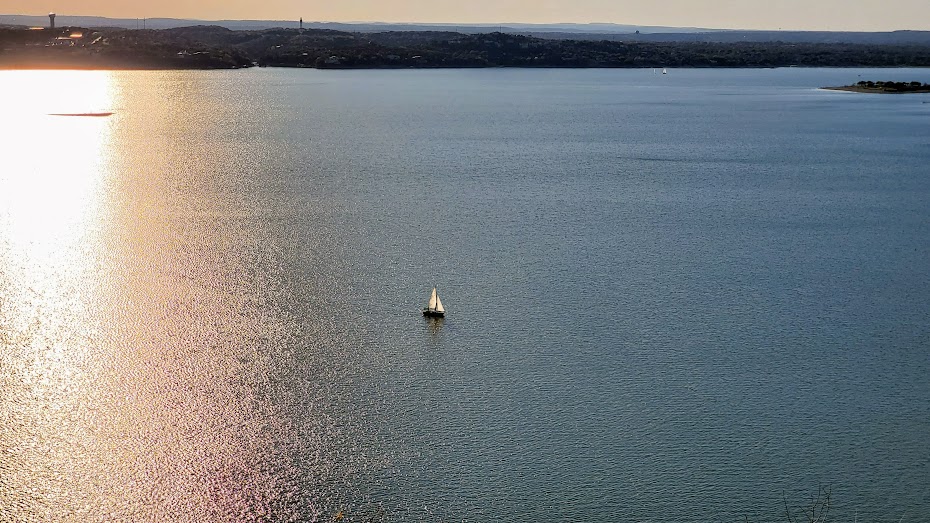 Fun company, good food and awesome views of the lake! 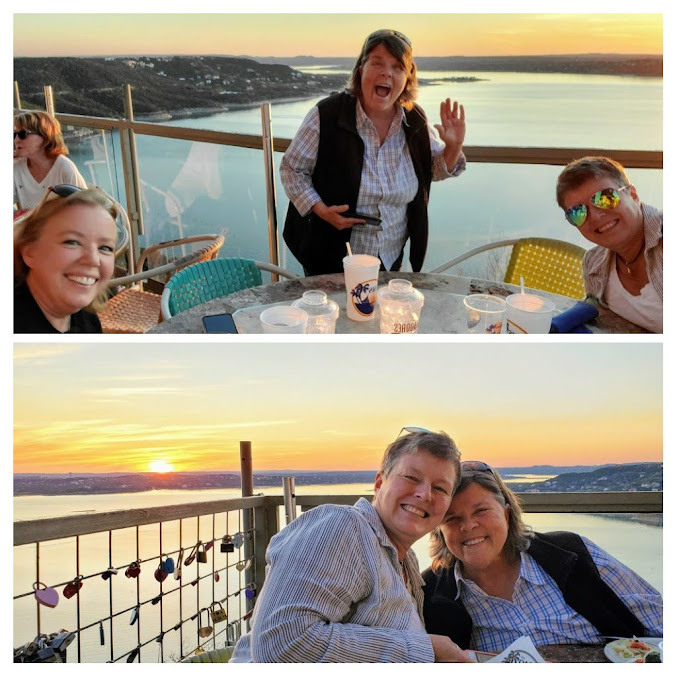 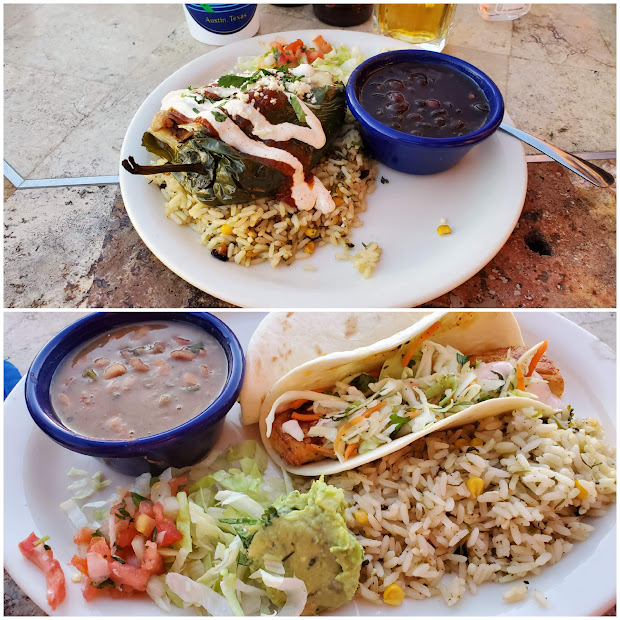 And of course, for dessert, a spectacular sunset! 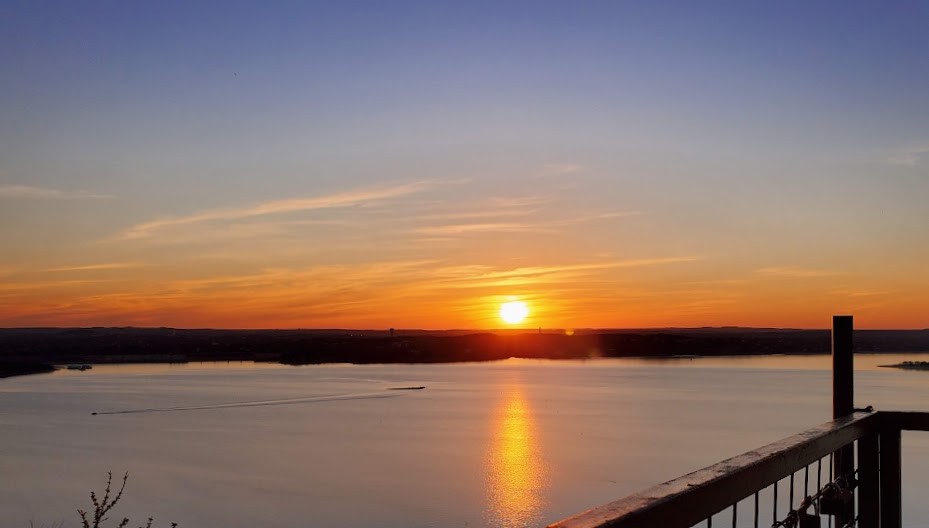 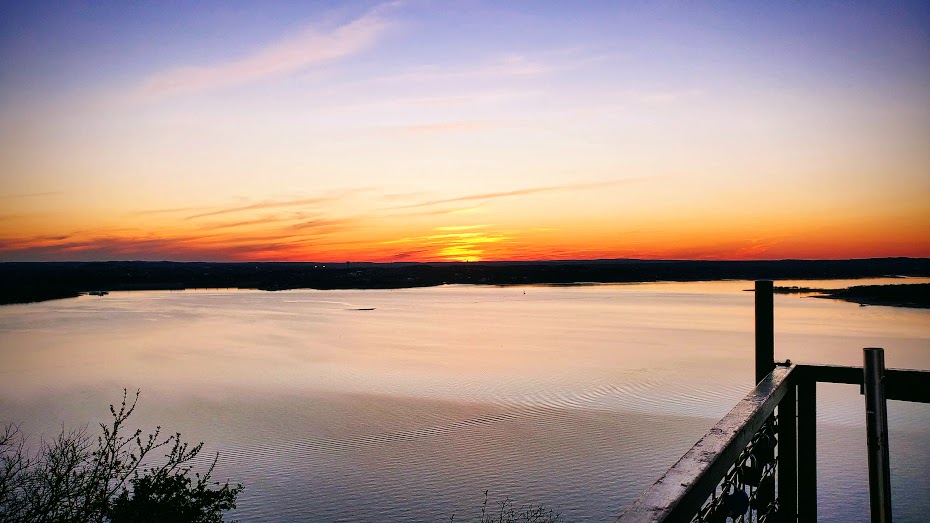 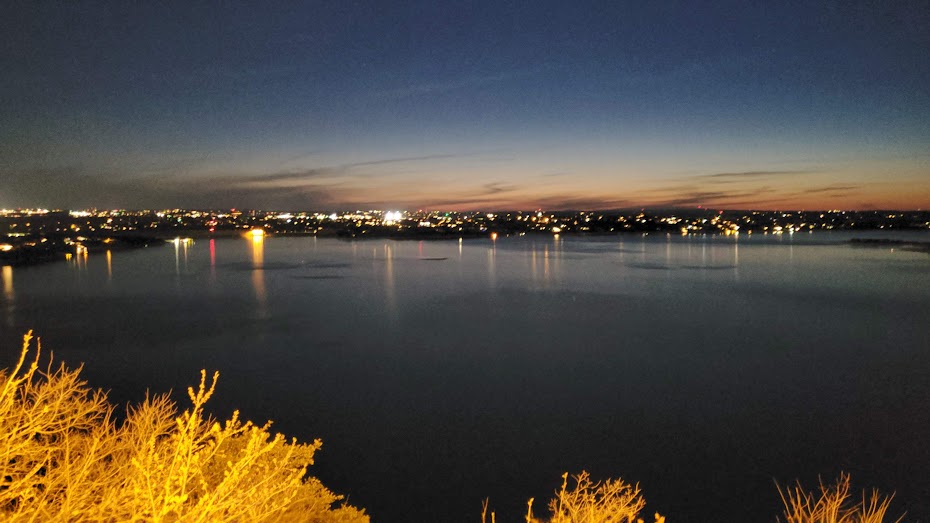 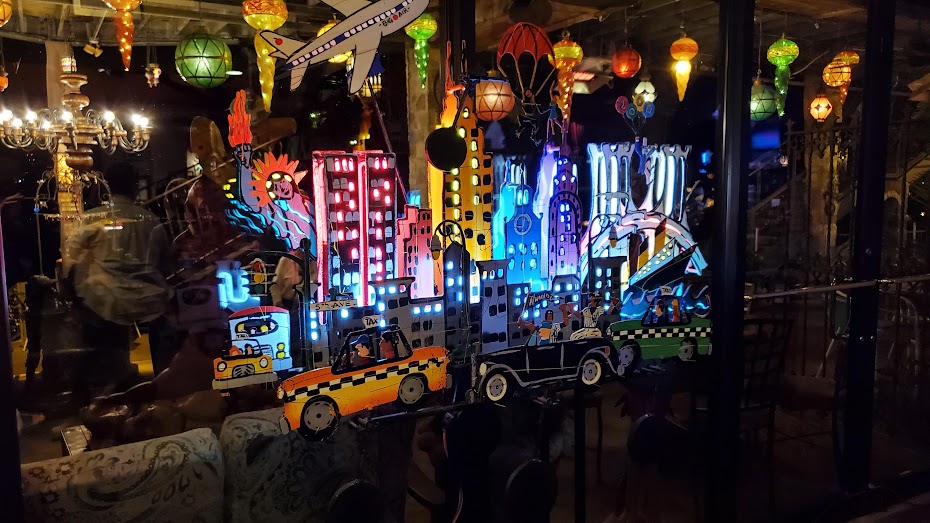 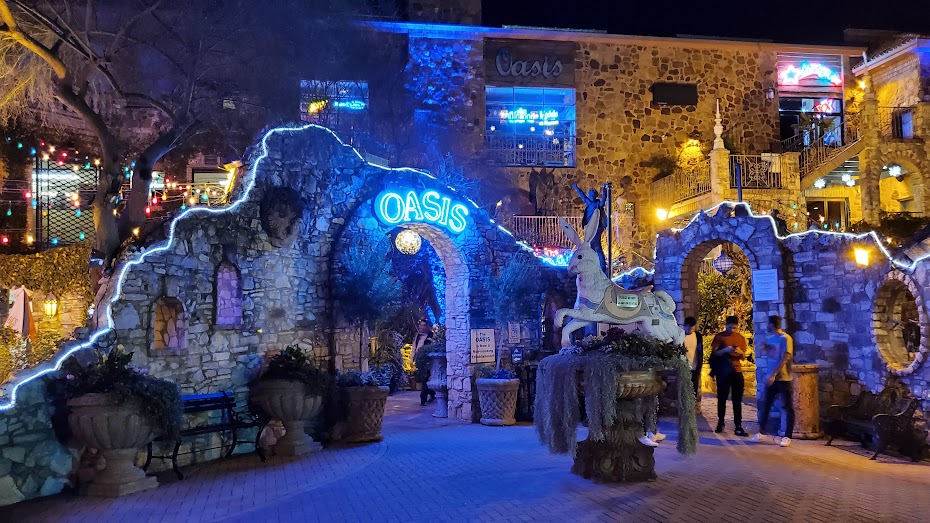 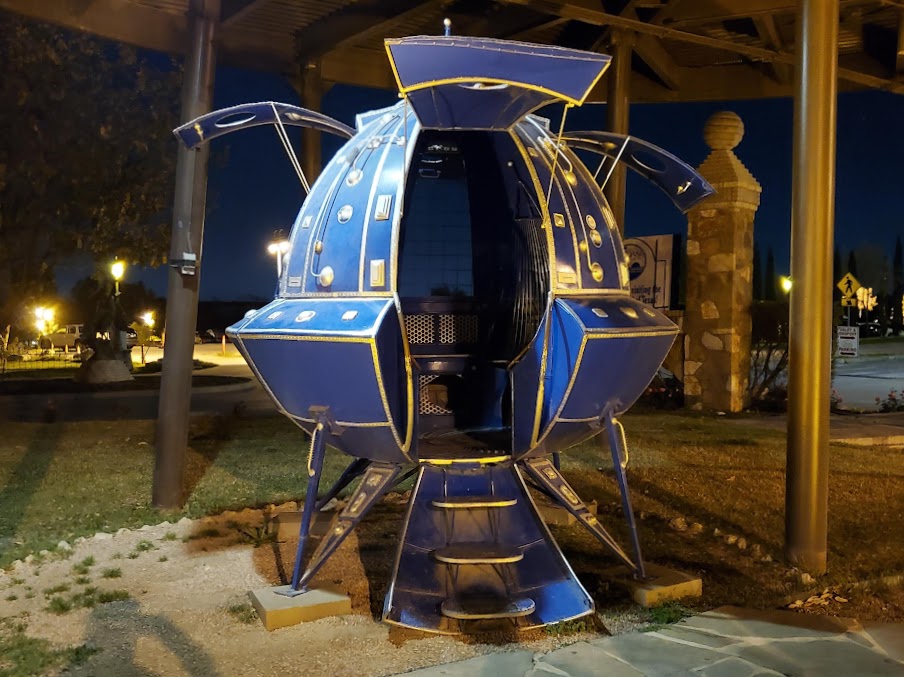 Four days was not enough time to thoroughly explore this beautiful city so the following day as we departed we vowed to return again someday. Stay tuned as we continue our travels east!