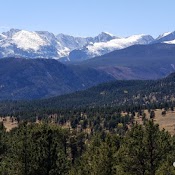 How can anyone visit Colorado without visiting Rocky Mountain National Park (aka RMNP)? We certainly couldn’t – it was at the top of our list of things to do during our stay. So on Saturday, October 7th we set off to visit this majestic park. Typically we don’t like sightseeing on a weekend due to the potential crowds but the weather forecast was decent and we were leaving the area on Sunday so we didn’t have much of a choice.

It should have been a straight westerly drive along US-34 to the park entrance but our server at the Breakfast Club in Loveland the day before told us that unfortunately US-34 was closed and under construction from October until May, 2018. A change in plans was necessary – drive south on US- 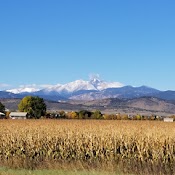 287, then head north on US-66 to US-36 which probably added an extra 20 miles to our trip. But that’s okay, it was a pretty drive with Aspen and Cottonwood trees adorned with brightly hued autumnal leaves highlighted against the snow capped mountains in the distance. 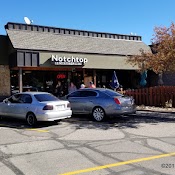 In Estes Park, a popular resort area, we stopped at the Notchtop Bakery & Cafe  (open daily for breakfast and lunch from 7:00 a.m. to 3:00 p.m.) for a late morning brunch. Definitely a very popular place so we had to wait about 20 minutes for a table. But oh, it was so worth the wait! Lots of intriguing 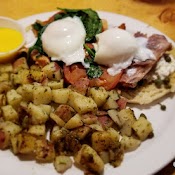 dishes on the menu so making a decision was difficult. For me, Smoked Salmon Benedict ($11.99) which was smoked salmon, cream cheese, capers, spinach, tomato on an English muffin, topped with dill hollandaise sauce and served with home fries. It was absolutely 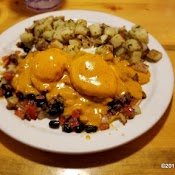 delicious – probably one of the best smoked salmon dishes I have ever had (I enjoyed leftovers the next day). Despite the fact that they had homemade corned beef hash as well as other hash dishes on the menu, Rob deviated from his norm deciding to give the Dragon’s Egg Rock Benedict ($10.99) a 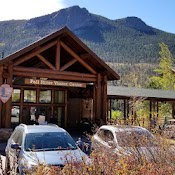 try. According to their menu, this was a true original consisting of two green chili pancakes, topped with chorizo, black beans, tomatoes, onions, melted cheddar cheese and two poached eggs, covered with a chipotle hollandaise sauce. That was yummy as well! Highly 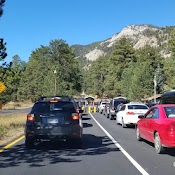 After brunch, a short 5 mile drive brought us to the Fall River Visitor Center, quickly followed by the Fall River Entrance Station. Oh, oh, what did I just say about sightseeing on weekends? Even with three gates open, there was a line of cars but fortunately it moved relatively quickly so within 20 minutes we were at the head of the line. The entrance fee was $20 but with our National Park Senior Pass, the fee is waived so it didn’t cost us anything. Based on the fact that there had been snow recently, we expected that the Trail Ridge Road would be closed but we were elated when the ranger told us the roads had been cleared the day before (of about 7 feet of snow!) so it was temporarily open for the day. I say temporarily because it would close again because of snow a few days later, then eventually close for the season in late October, not reopening until May 2018. Taking us to an elevation close to 12,000 feet, we really would experience a Rocky 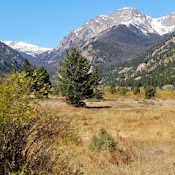 The Rocky Mountains form one of the world’s longest ranges, stretching almost unbroken from Alaska to below the southern border of the U.S., but the National Park preserves only about 415 square miles, a fairly small portion of the mountain range. Trail Ridge Road which is 48 miles long (11 miles of it is above the treeline), spans the Park and connects Estes Park on the east side to the town of Grand Lake on the western slope. Following a path that the Ute and other Native American peoples used for thousands of years, it is the highest continuous paved road in the United States, reaching an elevation of 12,183 feet. It crosses the Continental Divide at Milner 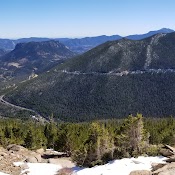 The road would take us through several different ecosystems.The montane ecosystem found at elevations below 9,000 feet, populated on the warm south facing slopes with ponderosa pines and forests of Douglas fir. And on the cooler north facing slopes, with lodgepole pine. Chokecherry, currant and juniper bushes sustain many animals, insects and birds. Between 9,000 and 11,400 feet is the subalpine system which occurs where there is over 30″ of precipitation annually. In this system, Engelmann spruce and flat needle fir trees reaching over 100 feet tall prevail. Above 11,400 feet is the alpine ecosystem where thin soil, strong ultraviolet light, drying winds and bitter cold define the life on the tundra.This is where plants and animals must adapt to these conditions or die.

Up, up and up we climbed along the twisty turny roads. Fortunately taking photos kept me occupied so I didn’t pay much attention to the lack of guard rails and the steep drop out the passenger side window. Gulp. The scenery became more and more dramatic as we climbed. How many times did we both say “ooh, ahh and wow”!  No words can describe the scenery – 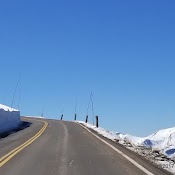 awesome, breathtaking, spectacular, wondrous, magnificent – they all sound so lame and really don’t do it justice. Guess the photos will have to speak for themselves. Good thing we live in a time of digital photography so it didn’t matter how many photos we snapped on our phones. 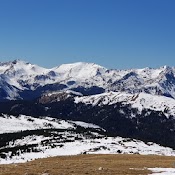 As we climbed, more and more snow lined the sides of the recently plowed road, often edged with banks of snow at least 2 feet deep in some places. Tall sticks bordered each side of the road indicating the edge of the pavement for snow removal purposes. Parked in pull out areas alongside the road was 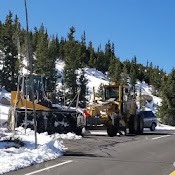 the heavy equipment used to clear the roads. Can’t imagine who would want that job!

Being the Nervous Nellie that I am I was a little apprehensive with all the twists and turns and the mounds of snow lining the road, but trying hard not to let the lack of guard rails and the high elevations bother me. In a few places they had boulders along the edge – yeah sure, that will be a big help. I was doing okay until my practical, logical, nothing phases him hubby, my Rock of Gibraltar (aka Rob) suddenly said “this is kind of freaking me out”. Say what???  I 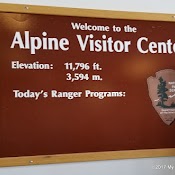 certainly didn’t want to hear that. Jeesh! I calmly suggested that perhaps we should turn around. Huh? What a stupid suggestion that was, after all there weren’t any side streets or turn arounds on the road! 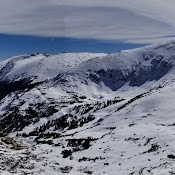 So with no other option, we continued on eventually arriving at the Alpine Visitor Center at an elevation of 11,796 feet and the highest visitor center in the National Park System. Wow! Good thing we couldn’t turn around, everywhere we looked there was a spectacular vista of the alpine tundra. 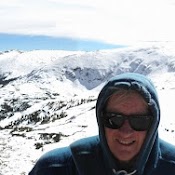 A few brave people (not us) opted to hike the snowy and icy Alpine Ridge Trail which begins at the far end of the parking area. It’s a 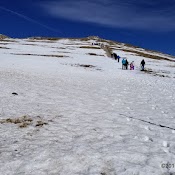 short hike but at an elevation of 12,000 feet and the steep incline gaining more than 200 feet in just three-tenths of a mile, this short trail has earned the nickname of “Huffers Hill”. Without the wind, snow, ice and cold temps, we might have given it a try but instead we went inside to the enjoy the warmth of the Visitor’s Center. Inside there were tundra exhibits, a bookstore, an adjacent gift shop and snack bar (the only restaurant in the Park but it was closed when we were there). 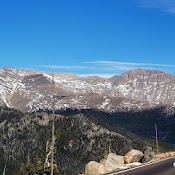 From here we could have continued on the Trail Ridge Road along the western side of the park to Grand Lake but knowing how slow going the drive would be it would take us hours to get back to Boyd Lake State Park so we decided to save that for another visit and head back the way we came. Not to worry, the scenery the second time around was just as awesome as the first time!

Before exiting the park, we stopped at the Beaver Meadows Visitor Center designed by the students of the Frank Lloyd Wright School 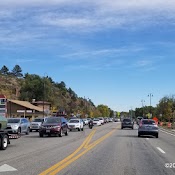 of Architecture at Taliesin West. The building, incorporating a rustic style that integrates into its natural surroundings, was completed in 1966 and made a National Historic Landmark in 2001. Inside, the center has a 20-minute orientation film and a large relief map of the park.

Thinking it might be nice to walk around the small town of Estes Park, we headed there. What did I say about weekends – it was wall to wall people everywhere! Not sure if there was some event or not but as we left traffic heading into the town was at a standstill.Glad we were leaving! 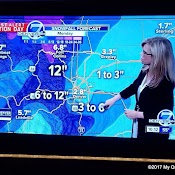 When we finally arrived back at our site at Boyd Lake State Park, we prepped for our departure the next day. It would be another short journey to Cherry Creek State Park in Aurora, CO (near Denver) where we would stay for five nights. Good thing we wouldn’t have to drive on Monday because look at what was in the forecast!