Strolling down Main Street of Andy Griffith’s hometown of Mount Airy, NC is a nostalgic step back in time, back to the ’60’s when The Andy Griffith Show was a popular television comedy series. 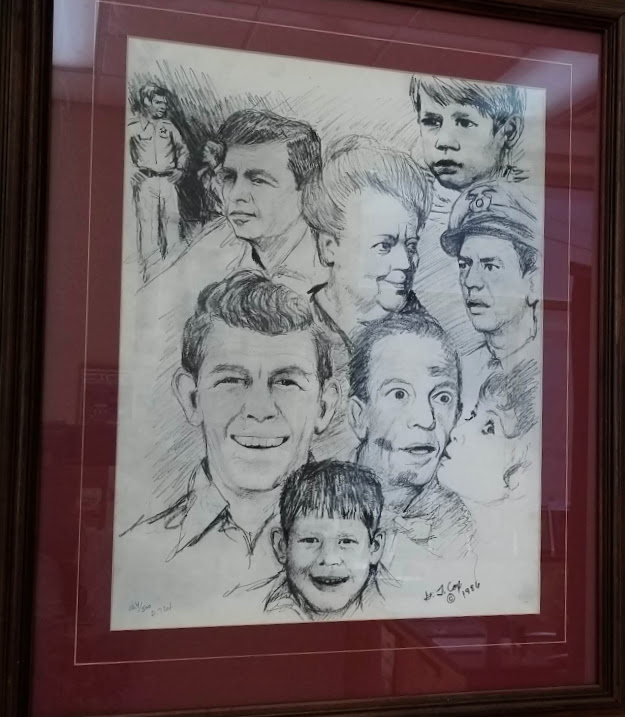 Inspiration for the fictitious sleepy rural town of Mayberry and even the names of the show’s characters were based on Griffith’s early experiences and the people he knew. In turn, it wasn’t until many of the town’s textile plants had shut down that the town realized, in the mid-80’s, the commercial promise of creating a Mayberry nirvana. By building replicas of the courthouse, the service station, the squad cars and adding a museum, perhaps Mt. Airy could become a popular tourist destination. Today it not only brings the setting of the beloved television classic to life but in doing so it also pays homage to its hometown hero who died from a heart attack in 2012 at the age of 86. During September, the town pays even further tribute to the show by hosting the week long celebration known as Mayberry Days, attracting thousands of tourists. 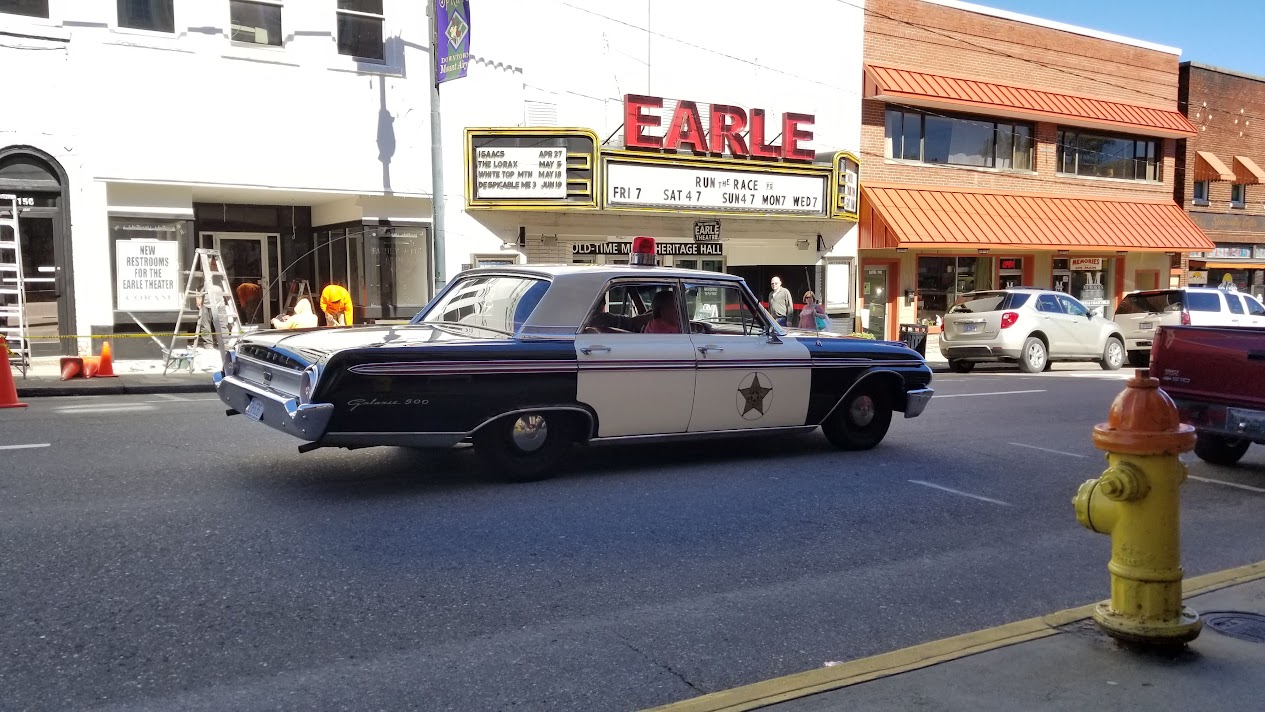 Remember Wally’s Service Station? It’s here that you can catch a Squad Car tour ($40 for a carload of up to 5 people) so you can learn all the history behind the Mayberry landmarks. Or perhaps just shopping for Mayberry souvenir memorabilia in their gift shop is your preference. 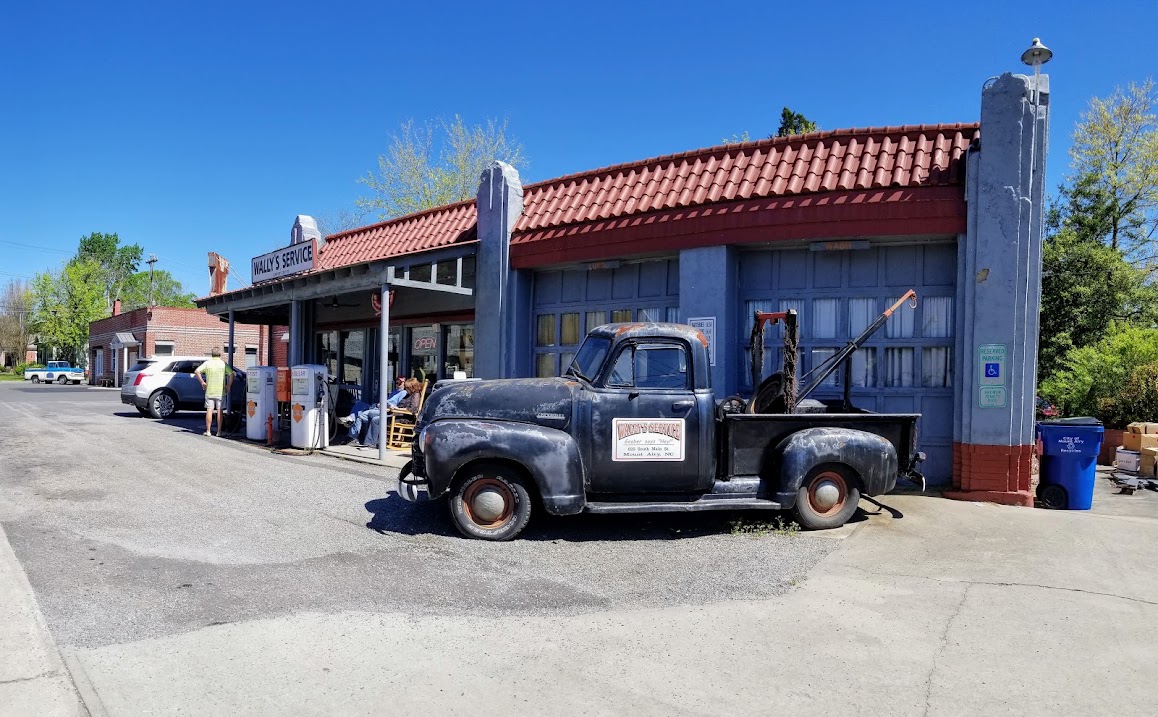 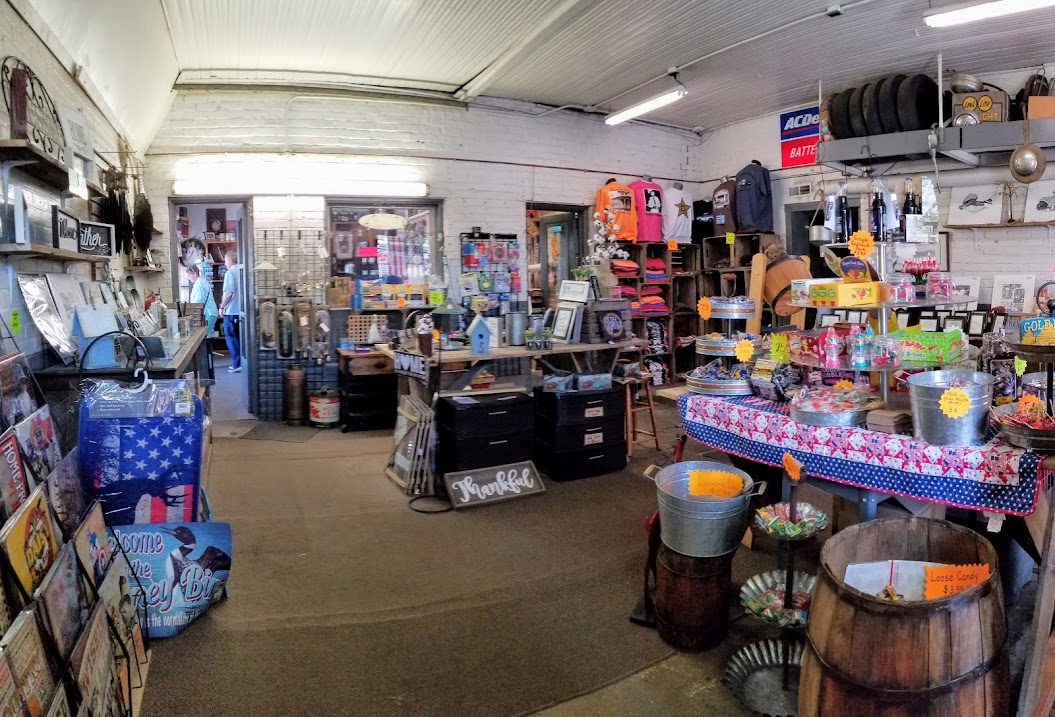 Visit the Old City Jail (once the real Mt. Airy jailhouse) and Courthouse right next door where you can put your feet up on Andy’s desk or take a peak at the jail cell where the town drunk, Otis Campbell, spent many nights sobering up. 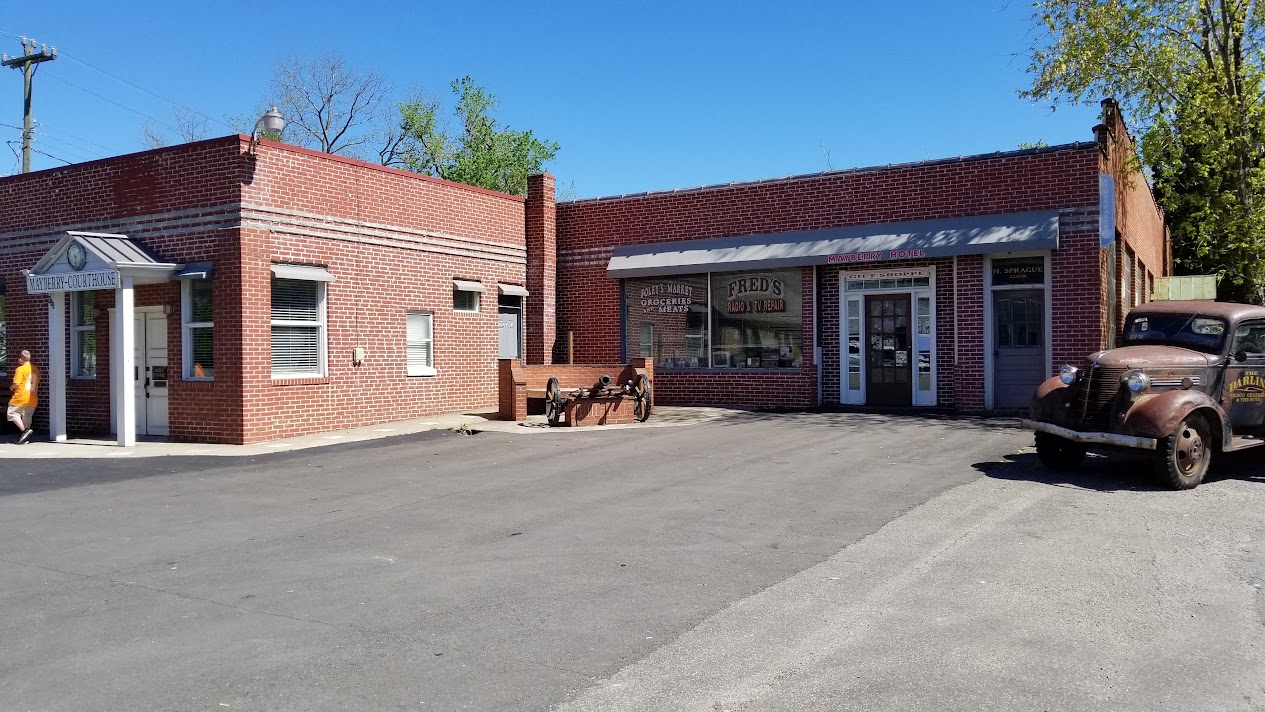 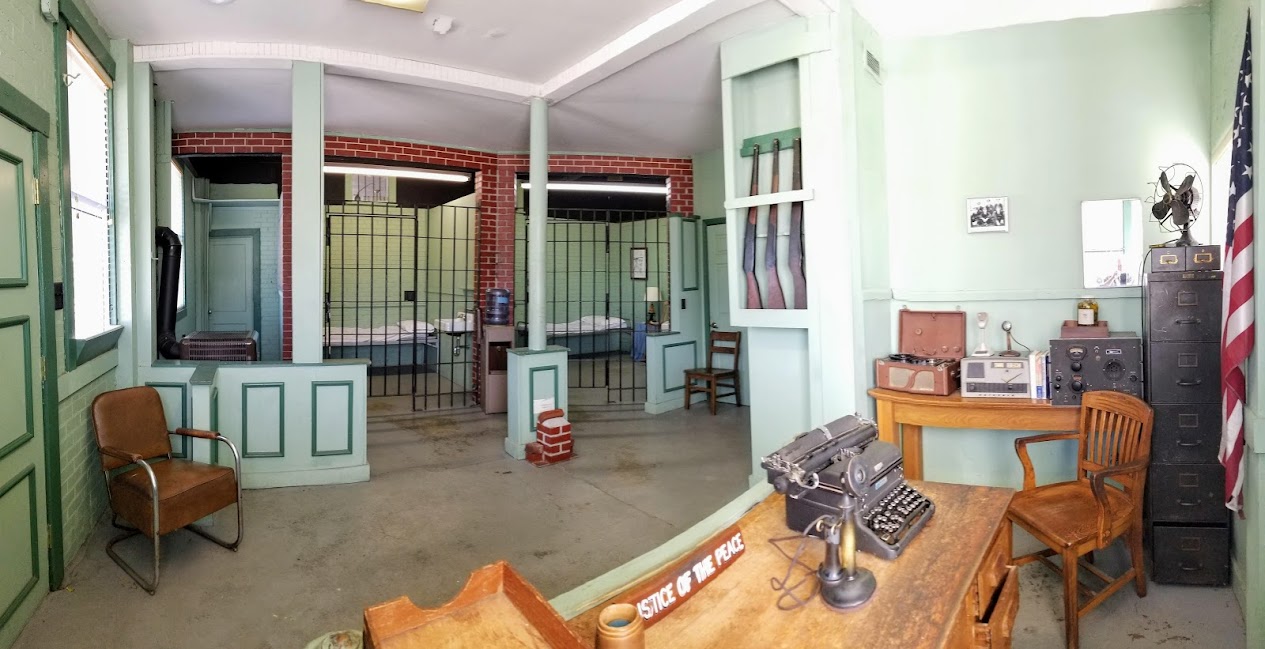 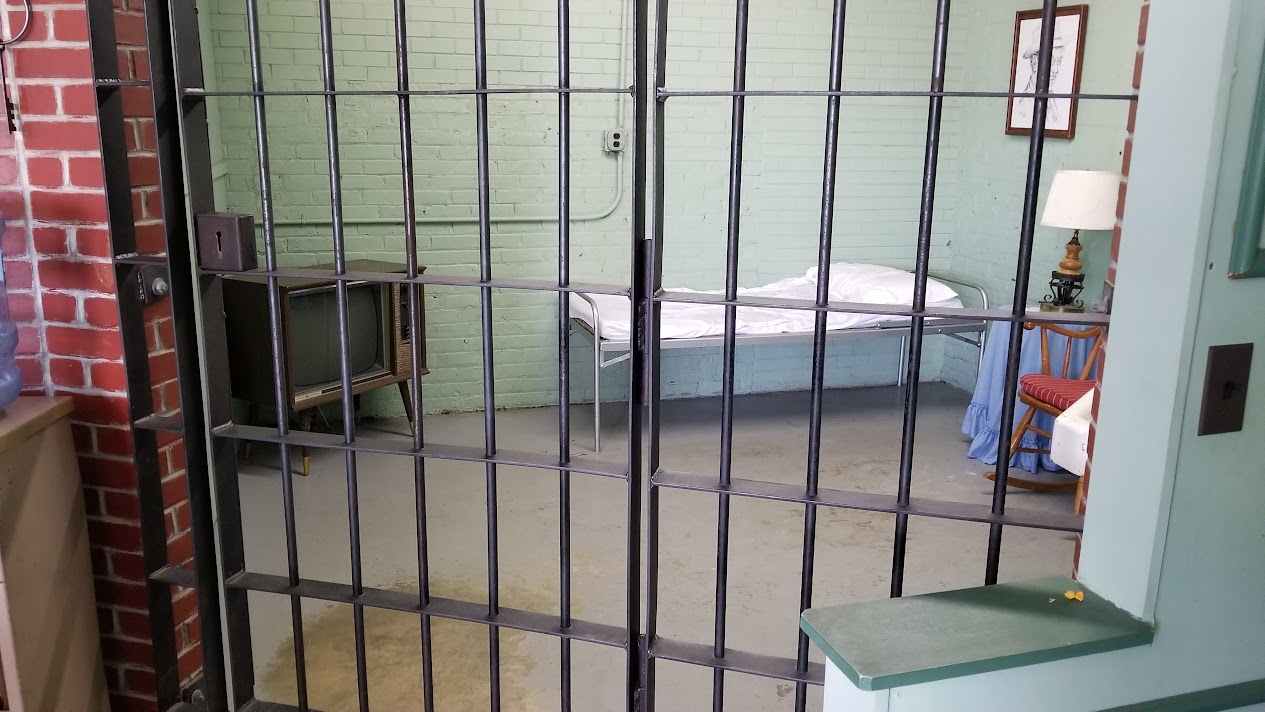 Speaking of souvenirs, there are a variety of retail shops to browse on Main Street for everything from antiques to toy tractors to candy. And if you are hungry, there are a number of restaurants from which to choose. 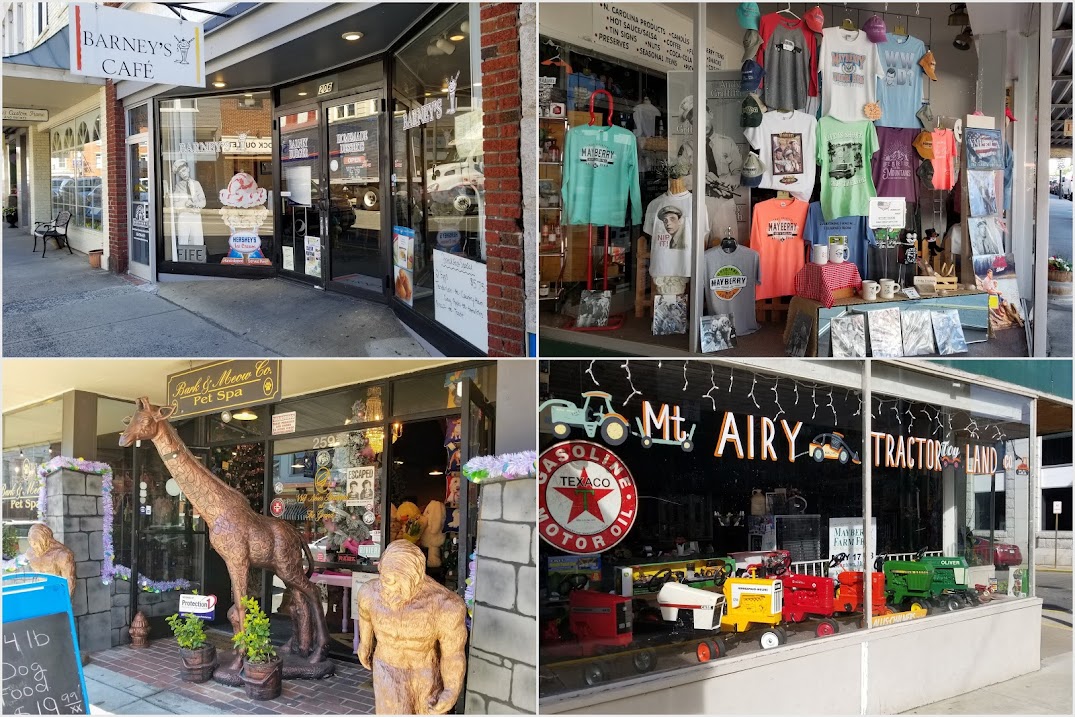 Wanting a quick lunch on our first day of sightseeing, we stopped for a “taste of the past” at the Walker’s Soda Fountain where we had a burger and fries. Decent food. Watching the shakes, malts and sundaes being served sure was tempting but we had other plans. 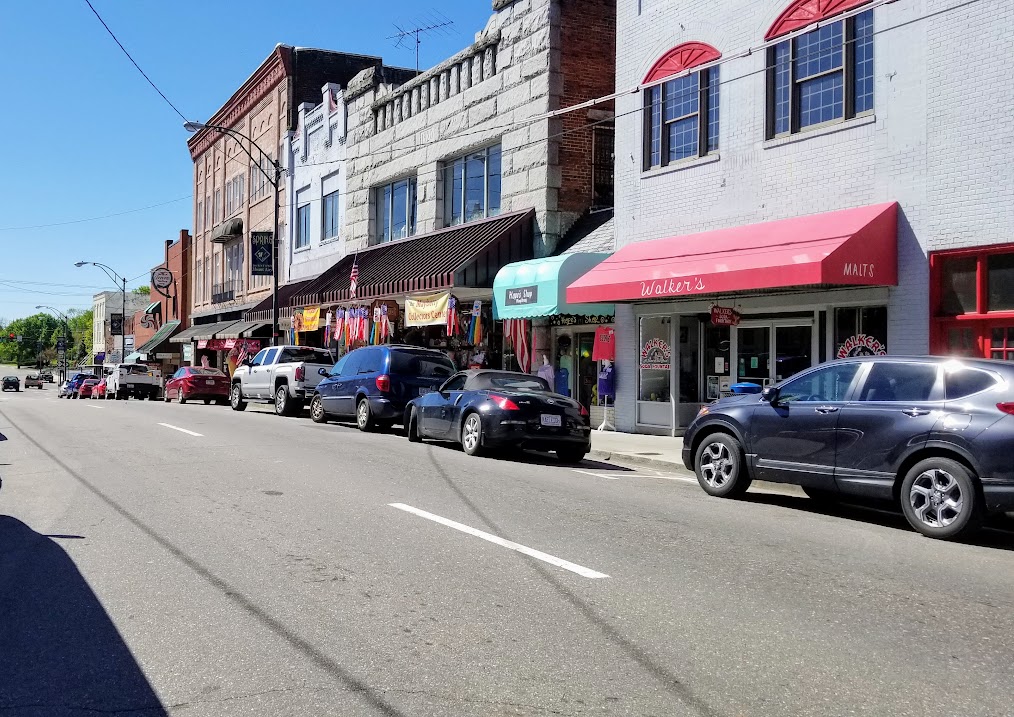 Instead to satisfy our sweet tooth craving, we visited Miss Angel’s Heavenly Pies, Inc. where we ogled the pies, cakes, cupcakes and candy. 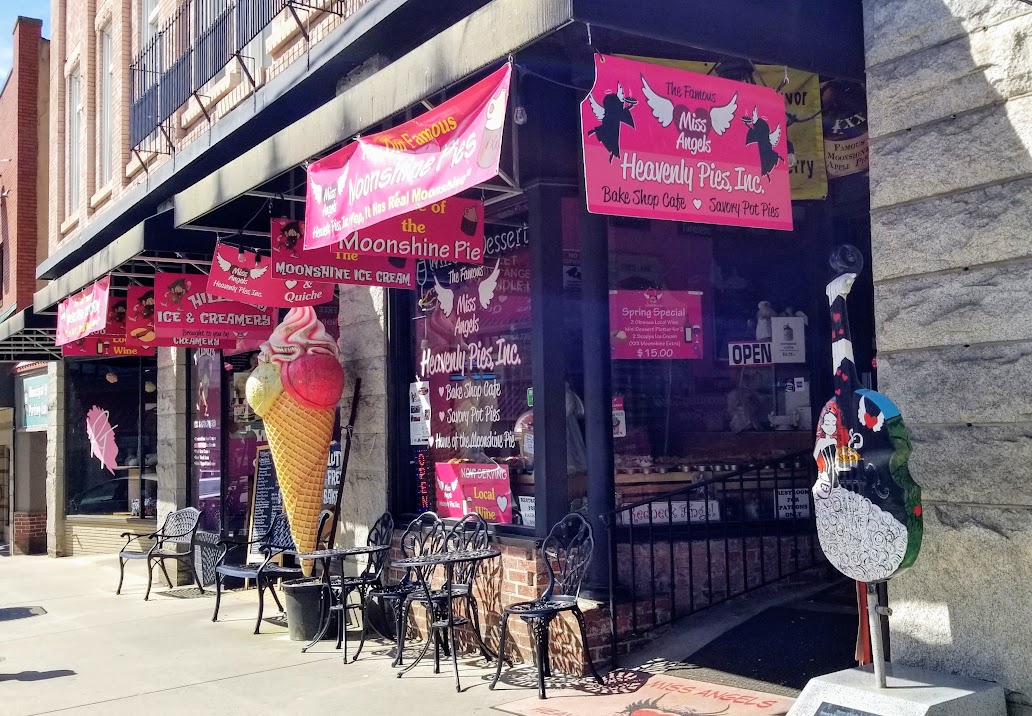 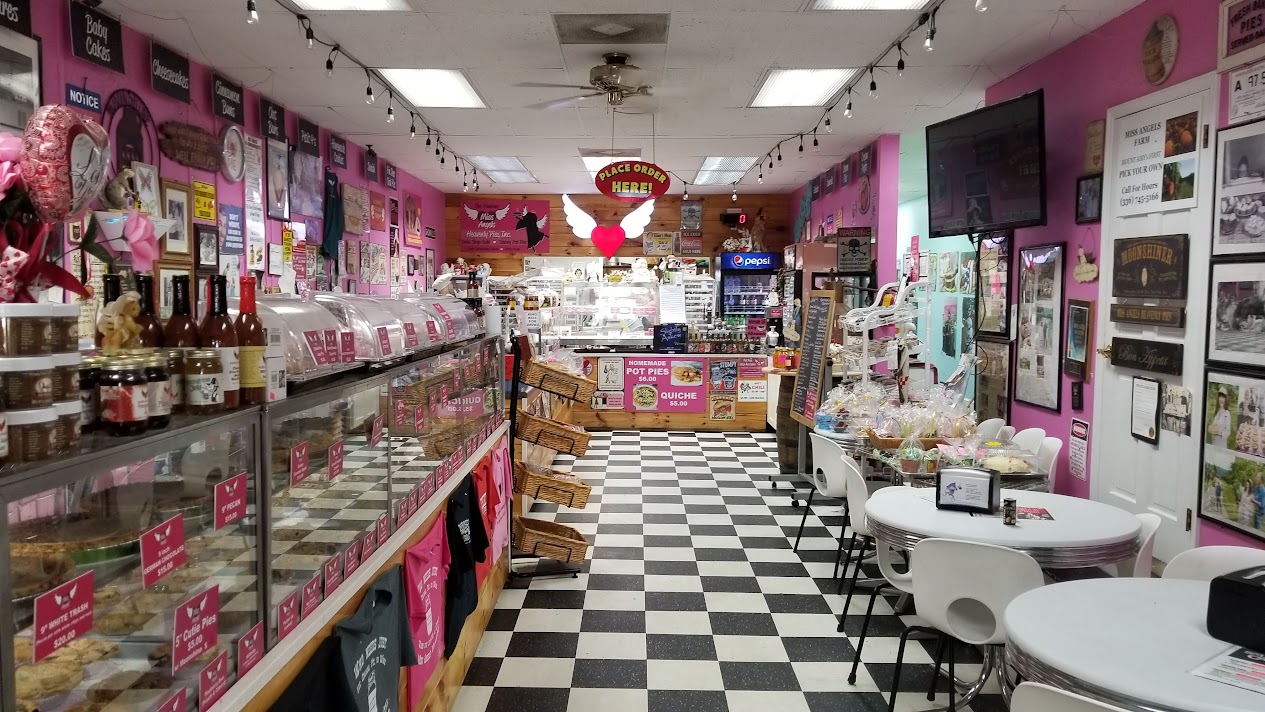 But since it was the “Moonshine Laced Ice Cream” sign out front that had originally enticed us inside, we stepped next door to visit their Hillbilly Ice Cream parlor. Be aware that you have to be over 21 to have their moonshine ice cream. Yum! Blackbeard Java for me and some sort of chocolate concoction for Rob. We had planned on visiting Opie’s Candy Store but looking at more sugary stuff just didn’t appeal!

Here’s an interesting tidbit – Miss Angel’s as well as Anchored Bakery in Mount Airy are part of the Surry Sonker Trail. Huh, what the heck is that? Don’t feel bad, we didn’t know about it either at least while we were there. Surry is the county that Mount Airy is in and a “sonker is similar to a pot pie or a cobbler. It comes about by blending fruit and unshaped dough, often sweetened with sugar or sourghum cane molasses. It can be accompanied by a dip (glaze) made of cream, sugar or molasses, and a few drops of vanilla extract. This is usually poured over the sonker in the dish.” Hmmm, interesting, if we visit Mayberry again, we’ll give it a try.

The Snappy Lunch is probably one of the most famous restaurants as it is credited as the only existing Mount Airy business mentioned in the television show. Once a post office, then a shoe shop, it got its name when it opened in 1923 because customers used to say, “I want a sandwich, and make it snappy!’’. Initially local workers and students including Andy Griffith frequented the restaurant to feast on bologna sandwiches for a nickel ($1.80 today) and ten cent hot dogs ($1.50 today). Nothing fancy about this place which serves breakfast from 6:00 a.m. to 10:30 a.m. and lunch from 10:00 a.m. to closing (whenever that is).

But what lures the locals and tourists to this restaurant is their World Famous Pork Chop Sandwich, a unique creation invented by owner, Charles Dowell. 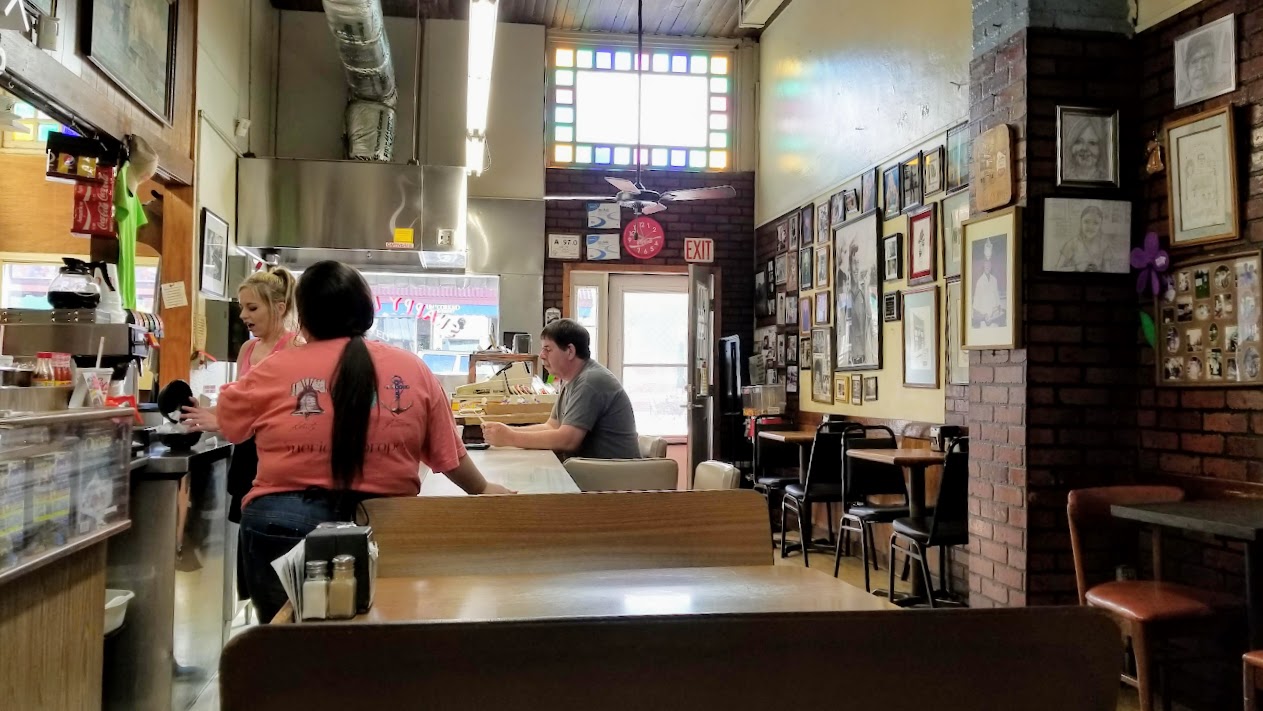 Being the chow hounds that we are, there was no way we were going to pass up anything labeled “world famous” so we had to try it! And it sure was cheap, to our surprise, the sandwich was only $4.60! Yikes, it was huge!  When served we simultaneously asked “how on earth are you supposed to eat this thing?” Quick, bring me lots of napkins, a bib and a Pepcid please!

According to what I have read, it is not actually a pork chop but 3 1/2 oz of pork tenderloin that is slipped into a 50 pound contraption that looks like a big toaster called “The Tenderator”.  Once tenderized, it is dipped in a sweet-milk batter, then the meat is fried in a shallow pool of oil until golden crisp. The dessert plate sized chop is served on a standard sized (way too small) bun that is topped with a battery of condiments (if ordered with the “works) that includes a slice of tomato, chopped onion, mustard, cole slaw, and special chili sauce. No dishes to wash here – it is served wrapped in wax paper without a plate. With the first bite we were impressed not only by how tender it was but also by how tasty it was. Amazingly we managed to gobble it up without dripping anything on our clothes! It has so huge maybe next time, we would just order one and split it, although cutting it in half might be challenging. 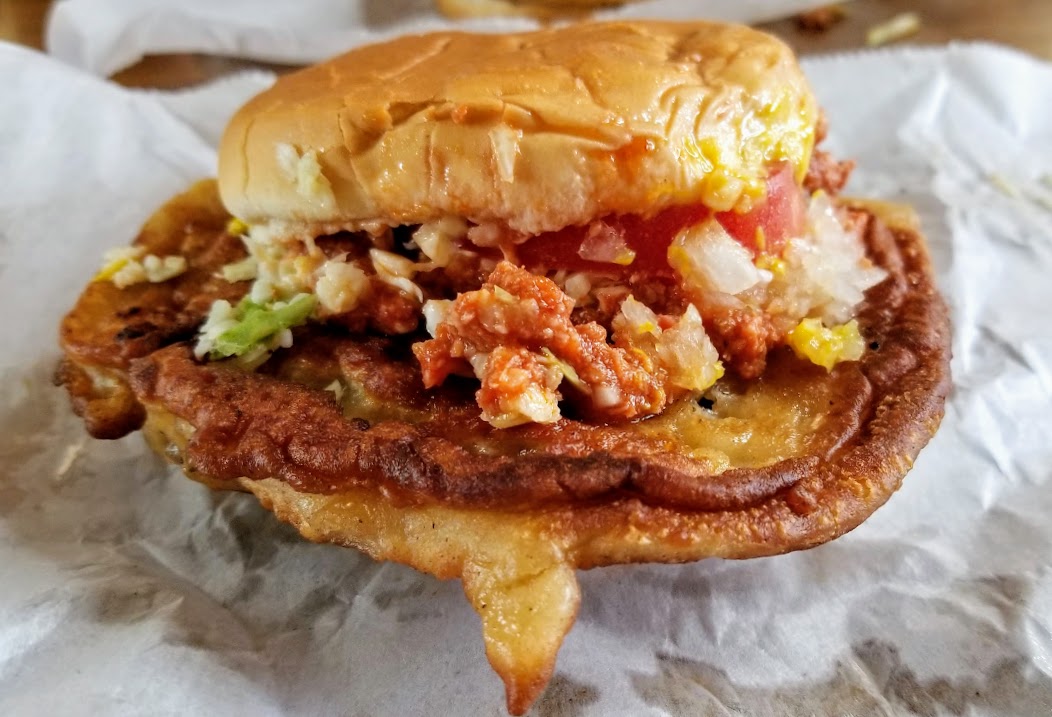 After eating at Snappy Lunch, if you are in need of a haircut or just want a picture sitting in the barber’s chair, step next door to Floyd’s City Barber Shop which opened as City Barber Shop in 1929. In 1980, Russell Hiatt took over and added Floyd’s to the name. He cut Andy’s hair from 1947 thru 1952 when Andy left for New York to start his career.

The Andy Griffith Museum boasts that it has the single largest collection of artifacts and memorabilia related to Andy Griffith, featuring hundreds of items from Andy’s life and his career in theater, film, and music. Although we didn’t find the time to visit the museum, we did manage to take a photo of a bronze statue of Andy and Opie outside the Andy Griffith Playhouse located next to the museum. The plaque next to the statue says: the Andy Griffith Show – A Simpler Time, A Sweeter Place, A Lesson, A Laugh, A Father and A Son. 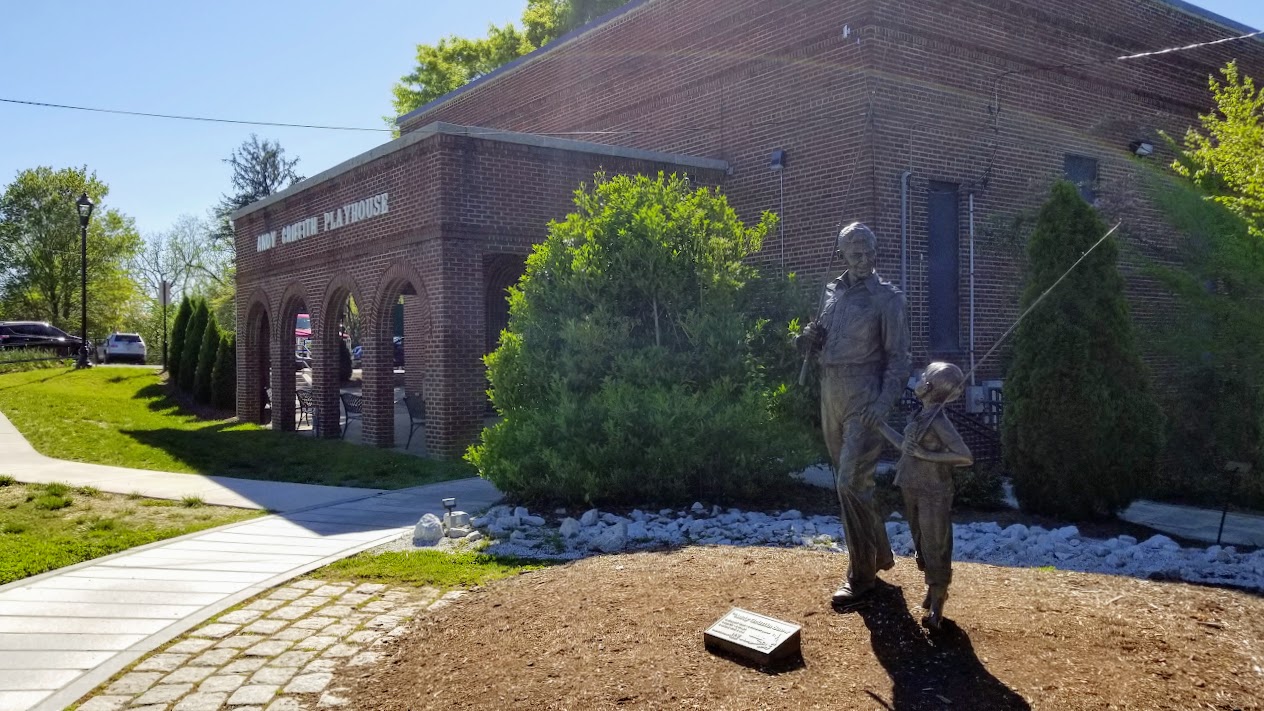 Located at 711 East Haymore Street, a mile or so outside of town is the small bungalow where Andy Griffith spent his childhood. Since it is now owned by the Hampton Inn, the only way to see the interior is to rent it for a night or two unless you want to watch this YouTube video. 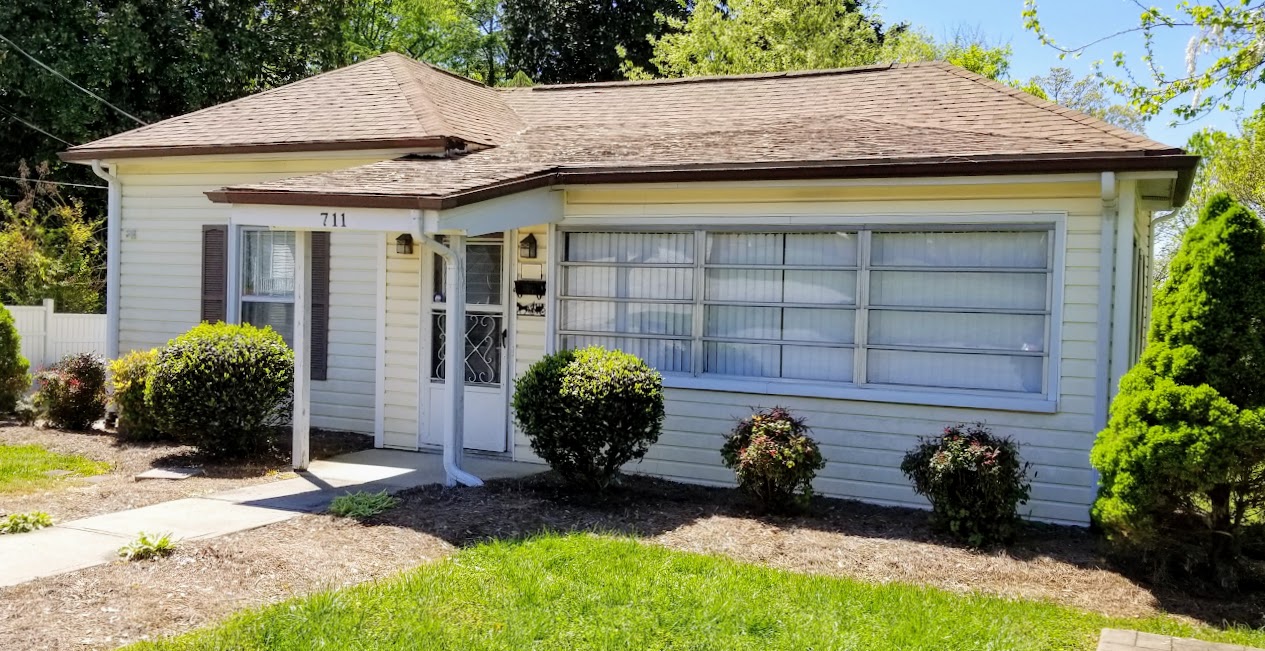 Besides being famous as a replica of Mayberry, the town has earned another title – the Granite City. Why? Because it is home to the world’s largest open faced (at ground level as opposed to a pit quarry below the ground) granite quarry located east of the town and because the downtown was actually built on what is known as The Rock. North Carolina has designated granite as their official state rock. 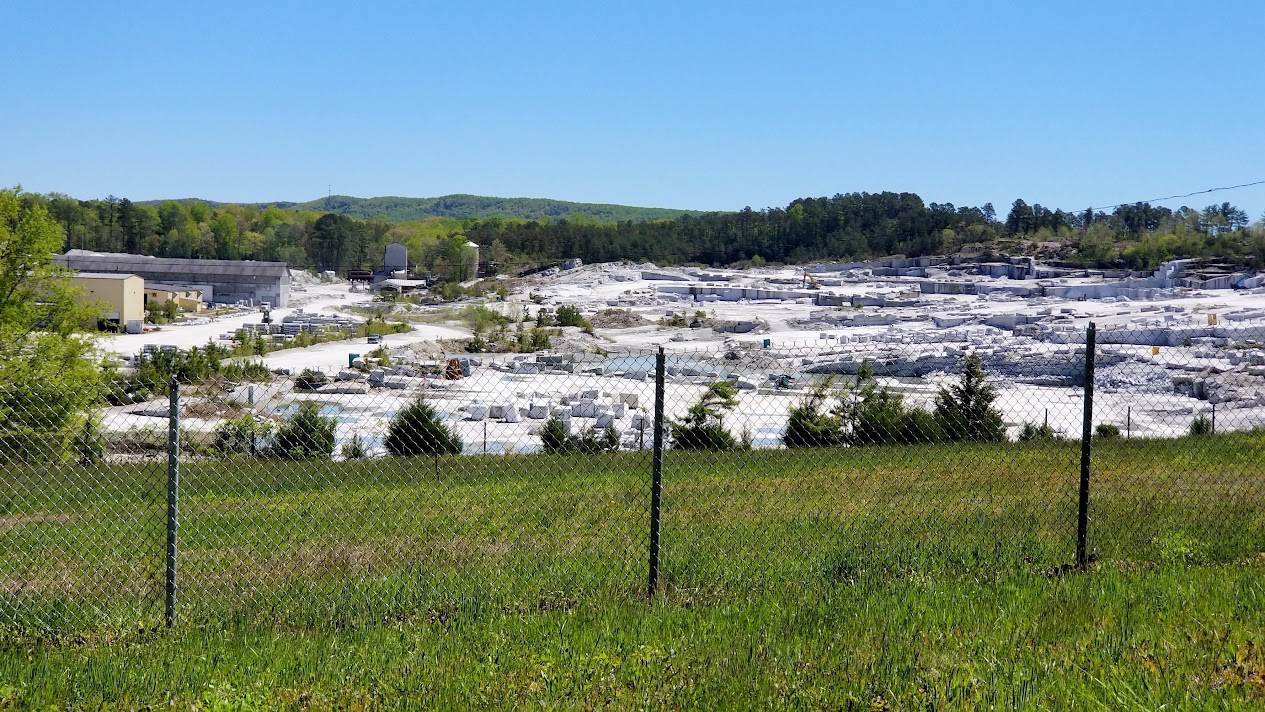 Many of the buildings in the downtown area are built out of the granite including the post office, the Veterans’ Memorial, the police department, the public library, the municipal building, many churches and other buildings. Mount Airy granite has also been used in high-profile projects such as the World War II Memorial in Washington, D.C., the Arlington Memorial Bridge, and the Wright Brothers Memorial.

There are two fabricating divisions at the quarry, one for curbing and the other for dimensional stone, which includes the granite used for buildings, memorials, mausoleums, and other products that are as decorative as they are functional. The crushing division reduces granite waste to small pieces sold for landscaping chips and other purposes. 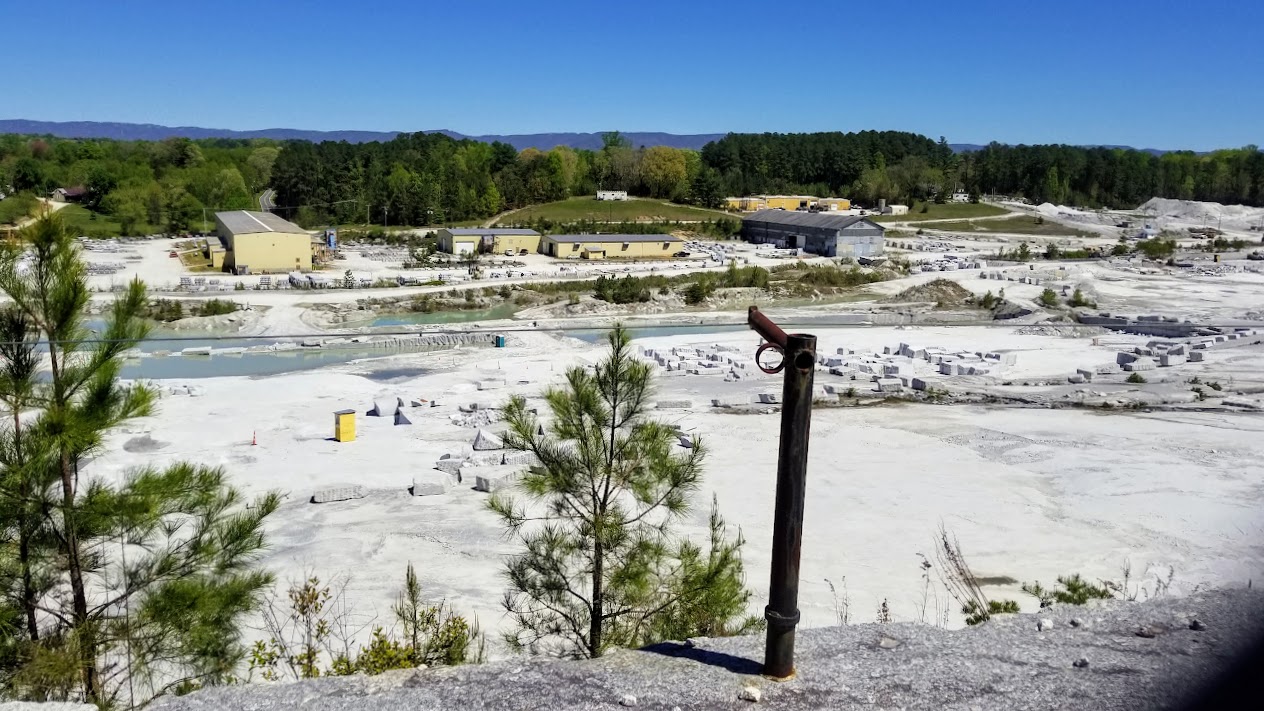 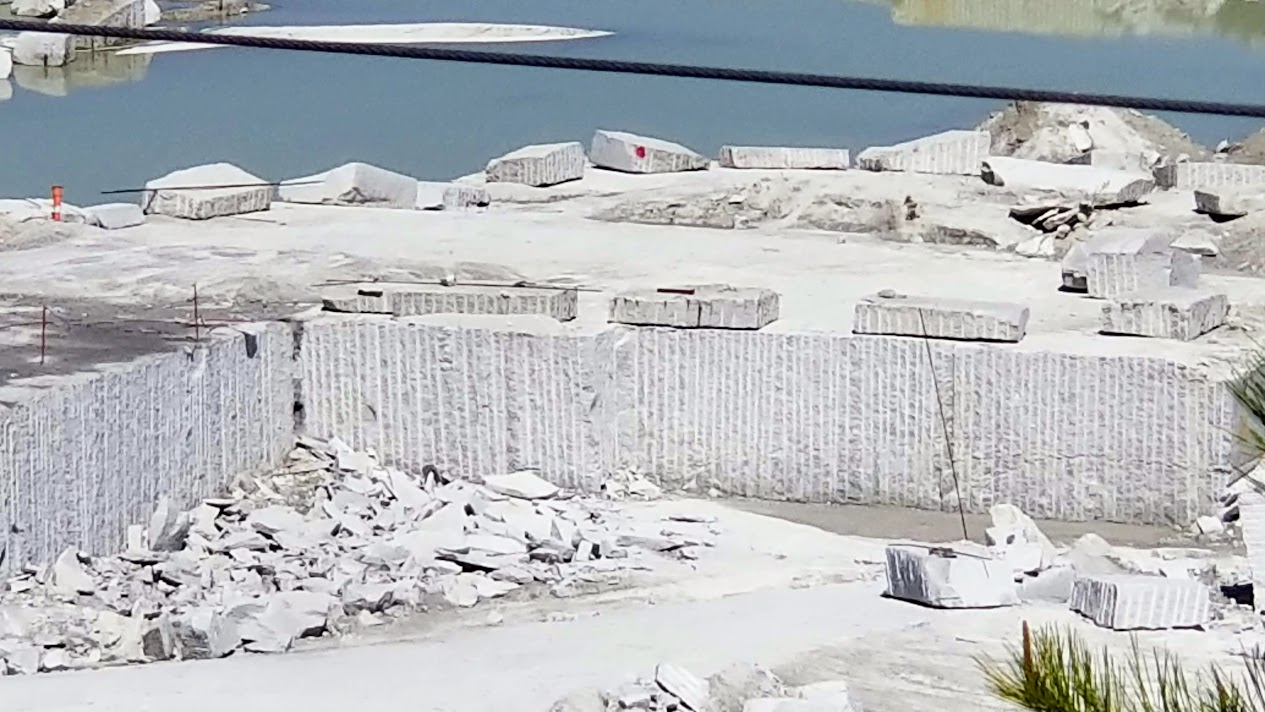 According to this website which explains the history as well as the extraction process, “On the surface alone, the quarry encompasses about 60 acres, or roughly the equivalent of 66 football fields. Mount Airy lore maintains that astronauts spotted The Rock from space as they orbited the Earth. That’s how large this rock is, and that’s just the part you can see. The mother mass — the block you can’t see — is about 7 miles long and 1 mile wide, north and south. And it’s 8,000 feet deep.”

To grasp how huge the quarry is and the process for harvesting the rock, the North Carolina Granite Group has posted aerial photos of the quarry as well as a 13 minute video of how the granite is processed from extraction to shipping. Very interesting except unfortunately it doesn’t provide a narration. Tours were once offered but now due to safety issues the only viewpoint is behind a chain link fence in the observation area. It is estimated that they extract about 1 million cubic feet of granite per year. That’s more than 82,000 tons of granite annually. Now that’s a lot of rock!!

Although it was certainly fun exploring the fictitious town of Mayberry, we weren’t done with our sightseeing yet. More to come……