Since we were so close to the Blue Ridge Parkway, how could we pass up an opportunity to drive a small portion of it’s 469 mile length (in our van, not the coach). Although we’ve “been there, done that” and driven the entire parkway (as well as the 105 mile long Skyline Drive “extension” of the Blue Ridge Parkway just to the north in Shenandoah National Park), much of that past journey has faded from our memories. It was, after all over nineteen years ago in 2000 (before we were RV’ers and bloggers) when we spent two weeks away from our corporate jobs on a road trip in our van to our ultimate destination – the Great Smoky Mountains National Park.

How we loved the Blue Ridge with its free, slow paced truck-less drive, the frequent overlooks with spectacular views of the mountains and valleys, the many historical buildings depicting rural life in Appalachia. A similar experience was found on the Skyline Drive such as exploring Luray Caverns along the way. Note that the Skyline Drive has an entrance fee (no charge with Senior Pass) while the Blue Ridge is completely free. 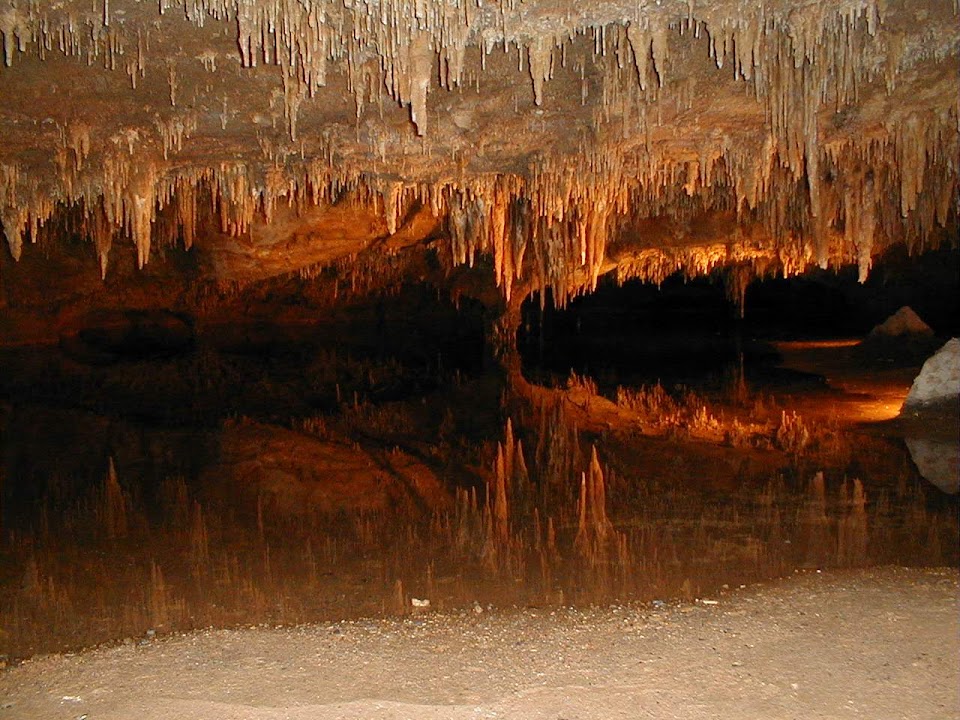 A repeat excursion has been on our bucket list for many years now.

Anxious to see the parkway again, we had barely arrived at Mayberry Campground, when we headed north on US-52 for about 15 miles to Fancy Gap, VA where, at milepost 200, we began our short journey on the Blue Ridge Parkway. 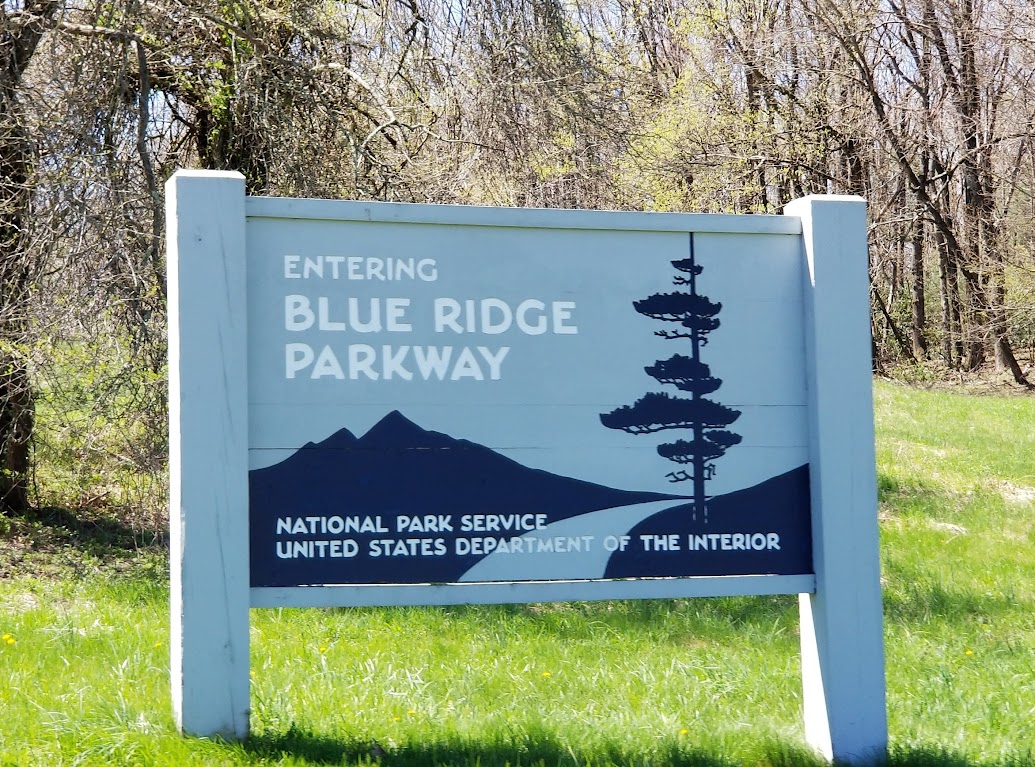 A mere 11 miles from our entrance to the parkway at milepost 189.9 in Virginia was Puckett Cabin, the home of John and “Aunt” Orlean Puckett, who gave birth to and lost twenty-four children who were either stillborn or died in infancy, possibly as a result of Rh hemolytic disease. Despite her inability to have children of her own, in her 50’s, she helped a neighbor give birth and thus her practice as a midwife was launched. For fifty years she traveled the Virginia countryside, never charging for her services, and successfully delivered over 1000 babies during the late 1800’s. She delivered her last baby at age 94 in 1938. She died the following year in 1939. 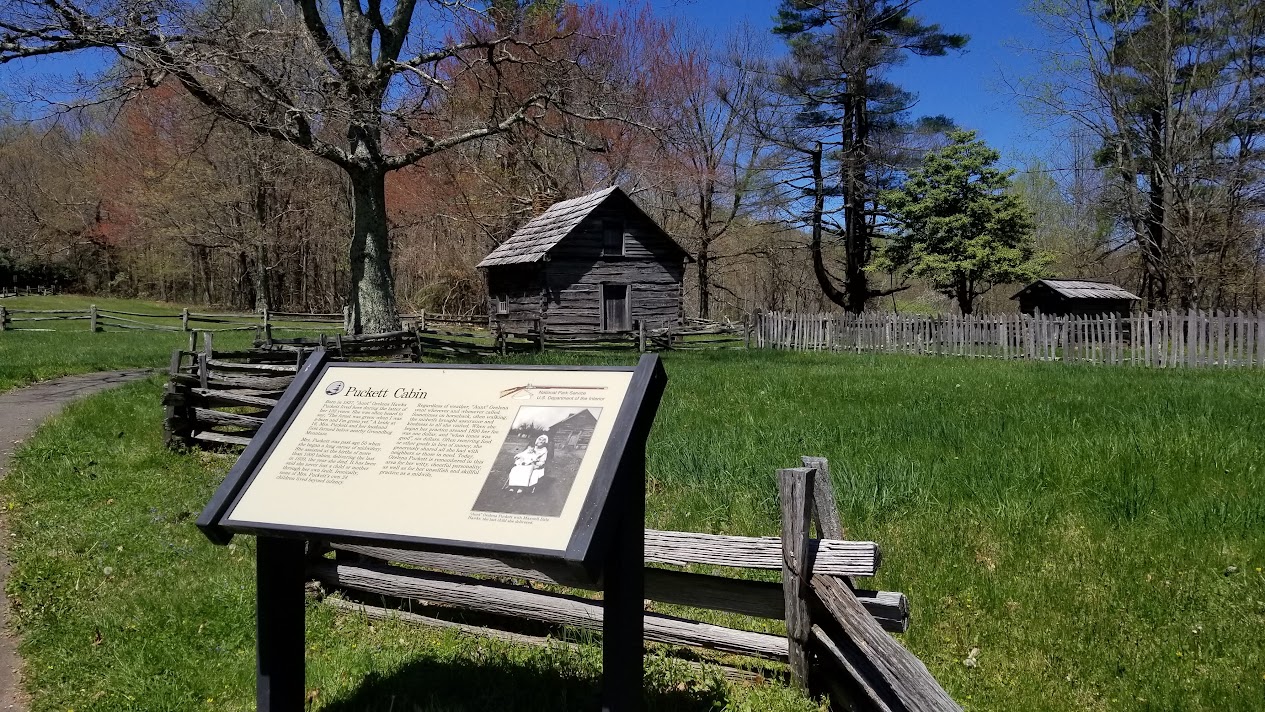 Next stop was Mabry Mill (Milepost 176) which is heralded as one of the most photographed sites along the Blue Ridge Parkway. 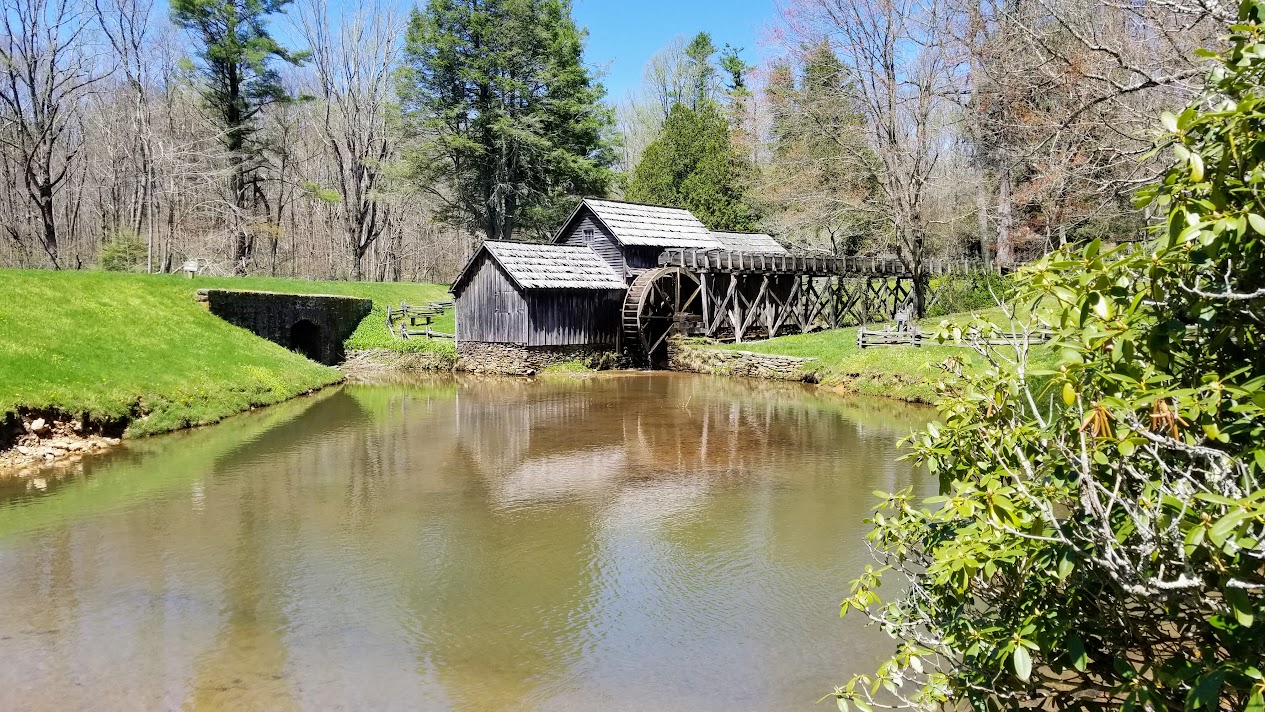 Initially Ed Mabry and his wife Lizzie in 1908 built the gristmill, waterwheel, and water supply flume system with hard work and hand tools. 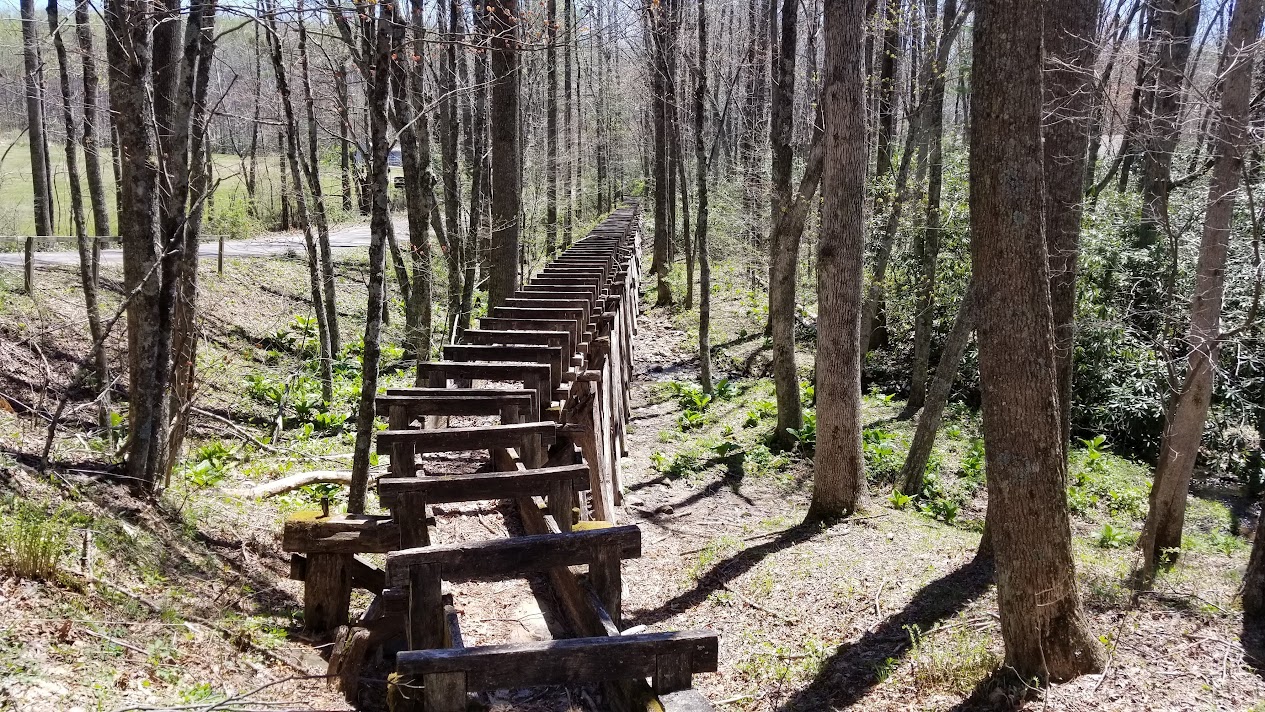 But they weren’t finished yet, next they built a sawmill and a woodworking shop followed by a blacksmith shop in 1913.

Between 1919 and 1920, the Mabrys built a two-story farmhouse. The National Park Service acquired the property in 1938 after Ed died and Lizzy moved away. 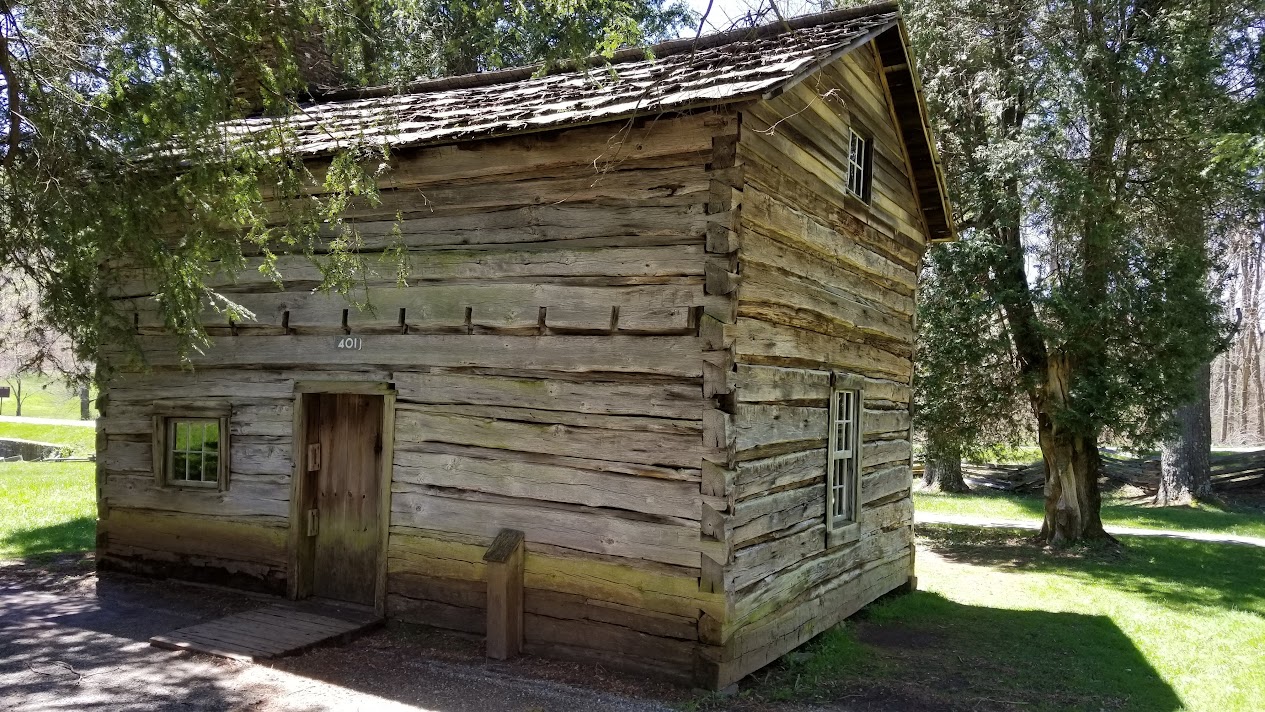 Today the National Park Service staff conducts demonstrations on blacksmithing, carding, spinning, basket making and other traditional Appalachian crafts. Although it wasn’t open during our visit, the Mabry Restaurant offers a country style menu and the Gift Shop features Virginia crafts and foods, as well as a wide selection of Mabry Mill and Blue Ridge Parkway-inspired gifts, clothing, books, music and souvenirs. 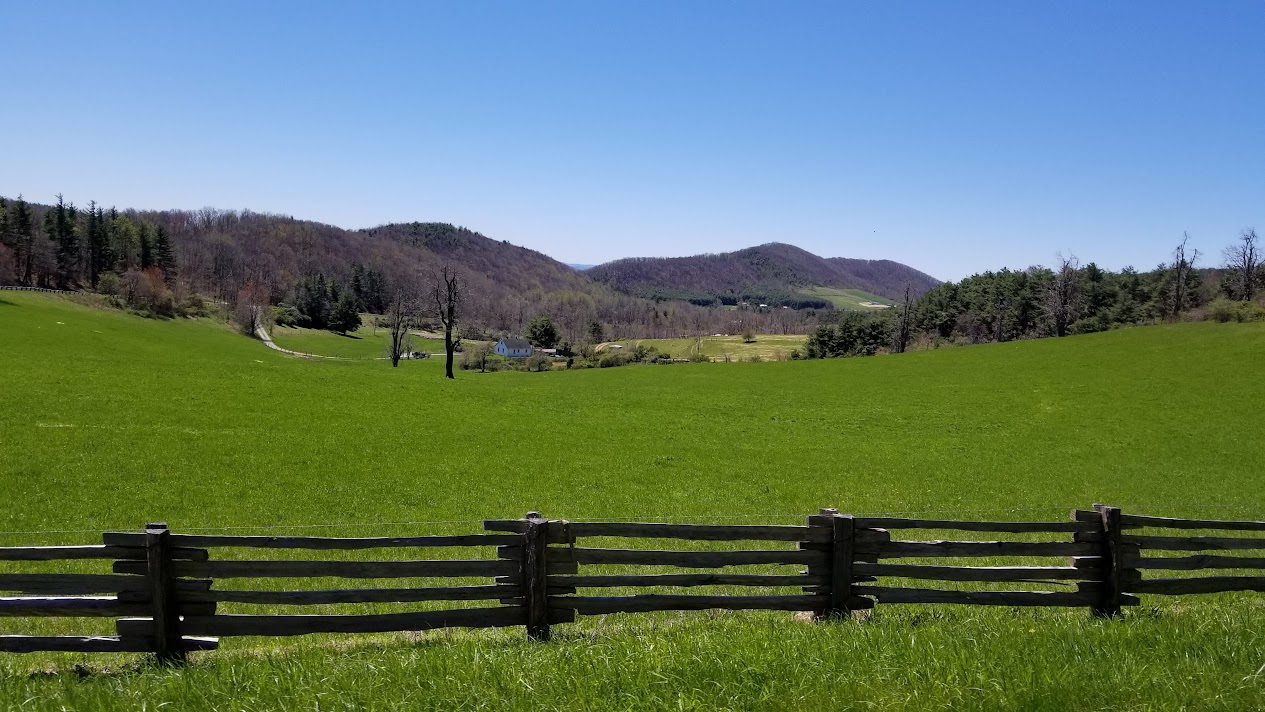 Near milepost 170 at Rock Castle Gorge Overlook, we turned around and started to head back towards Mount Airy. Instead of driving the parkway in reverse, we explored some of the backroads. At Meadows of Dan, we stopped at the Concord Corner Store, a gift shop featuring unique items produced by local crafters, including handmade local quilts made in store.

From there, US-58 brought us to US-771, Excelsior School Road and US-677, Willis Gap Road, both scenic but a little twisty and turney!

Although driving a portion of the Blue Ridge again was awesome, we were a little disappointed that the huge rhododendrons, which in many places border both sides of the parkway, were not in bloom yet. What a spectacular, colorful display that must be! Perhaps next time, after all, revisiting the rest of the parkway is still on our bucket list.

On another day, our agenda included visiting Pilot Mountain State Park which is located about 13 miles from Mayberry Campground. Having seen the towering mountain rising above the rolling hills on the horizon as we drove north along US-52 towards our destination of Mt. Airy, we knew that visiting the state park was a must do. 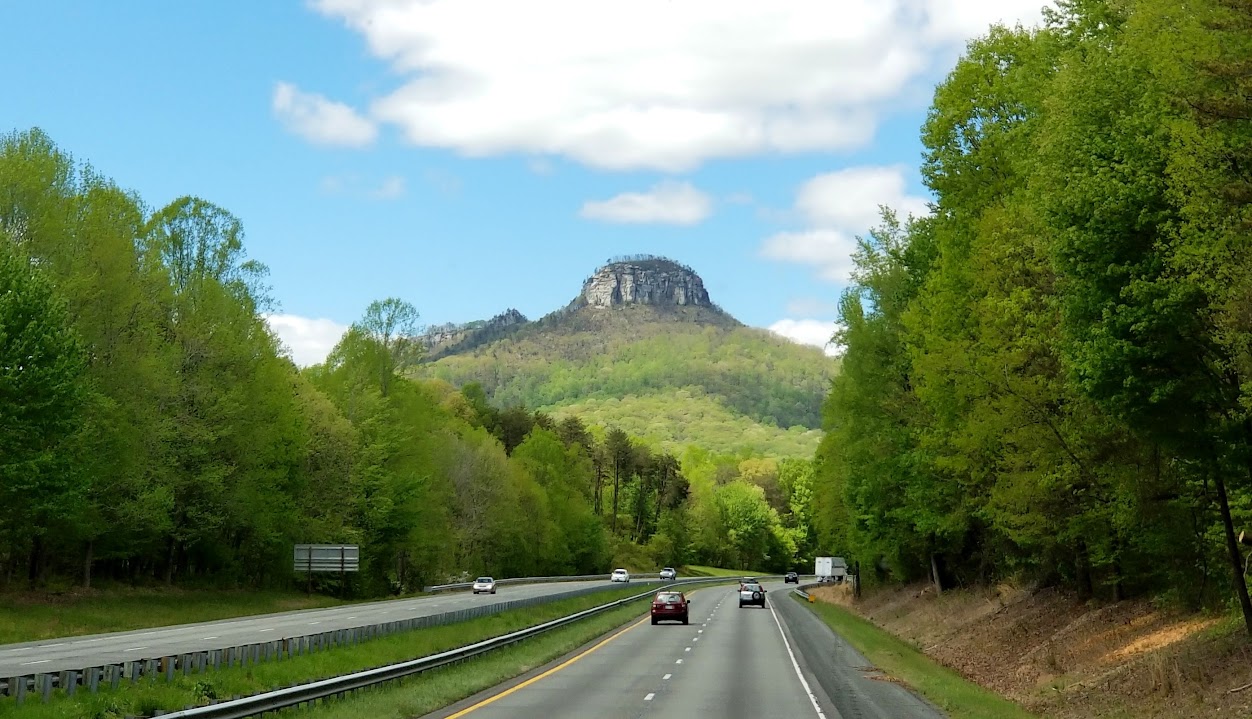 Pilot Mountain is part of the Sauratown Mountain chain and was named by the Native American tribe known as the Saura who called it “Jomeokee,” meaning “pilot” or “great guide.” Rising 2,421 feet above sea level, the mountain is defined as a quartzite monadnock which is a rocky mass isolated in an essentially level area and has resisted erosion. The mountain is comprised of two different pinnacles – Big Pinnacle and Little Pinnacle. Big Pinnacle or “The Knob” rises 1,400 feet above its surrounding terrain, has a rounded top covered with vegetation and has bare walls 200 feet tall of rock. Geologists believe that Big Pinnacle was formed by the compression of sand which existed in North Carolina approximately one billion years ago. First compressed into sandstone, it later became quartzite through heat and pressure.

The park is divided into two sections: the Yadkin River section and the more popular, Mountain section which features a paved road that leads to the top of Little Pinnacle.

Besides the gorgeous scenery, the park also offers an extensive trail network augmented by a bridle trail and a canoe trail section on the river, camping and opportunities for rappelling and rock climbing. Note Big Pinnacle is closed for climbing. Family camping is available in a 42-site campground which has 15 nonelectric RV sites, ranging in size from 25 feet to 38 feet. 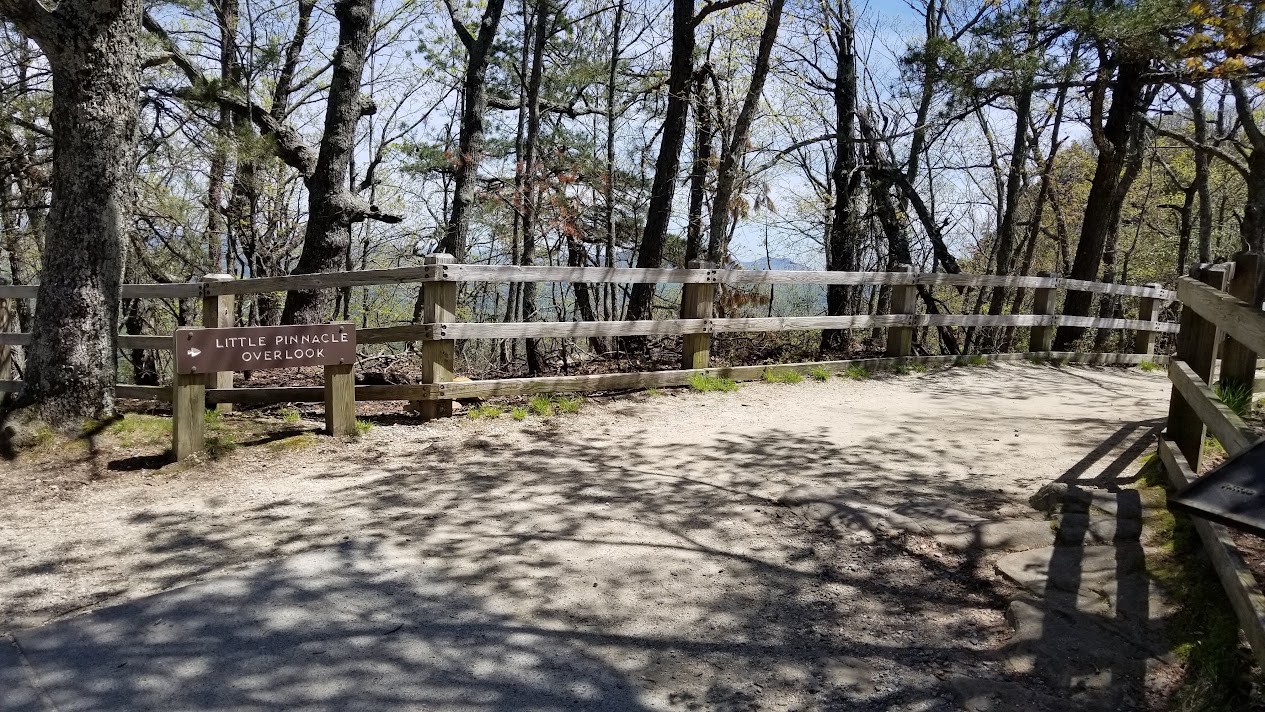 Walking the easy .3 mile, Little Pinnacle Overlook Trail, we enjoyed spectacular views of Big Pinnacle, the surrounding area and the Blue Ridge Mountains off in the distance.

Back on the road again heading back to Mayberry Campground, we passed by Graystone RV Park which offers ten 38 x 50 full hookup pull thru sites with concrete slabs. It certainly was much quieter than Mayberry Campground but it looked a little stark with no trees or shrubs. Must be pretty hot in the summer. However, it did have a lovely view of Pilot Mountain. 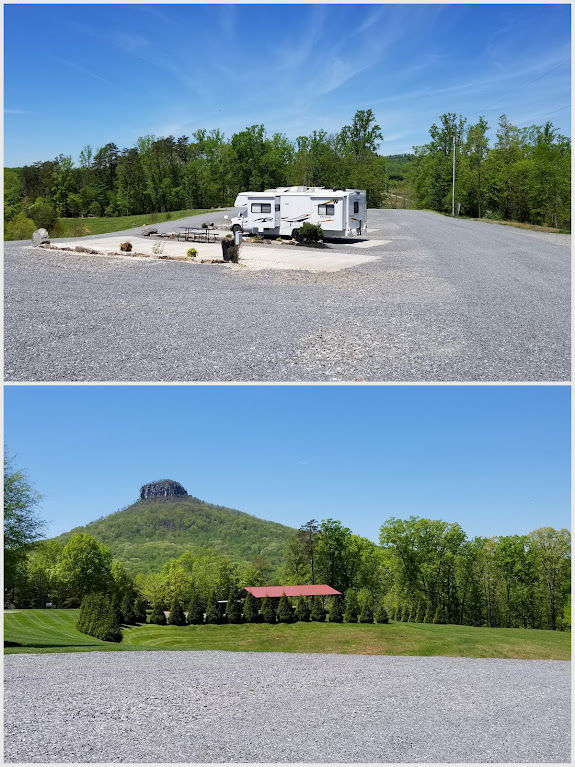 Back at Mayberry Campground, we prepared for our departure the next day. Hard to believe that with only a three night stay, we were able to not only see the sights in Mount Airy but to drive a portion of the Blue Ridge Parkway and visit Pilot Mountain State Park. Fun place to visit for sure!