Remember that saying from the 1989 movie Field of Dreams starring Kevin Costner where he says “If you build it, he will come.”

Well, during our stay in Quartzsite, we went to a place near Parker, AZ that proves that even if you build a place in the middle of nowhere in the harshest of environments, that ideally needs a four wheel drive vehicle to get to, is only open 7 months of the year and just on Saturdays and Sundays for six hours each day, they will most definitely come! 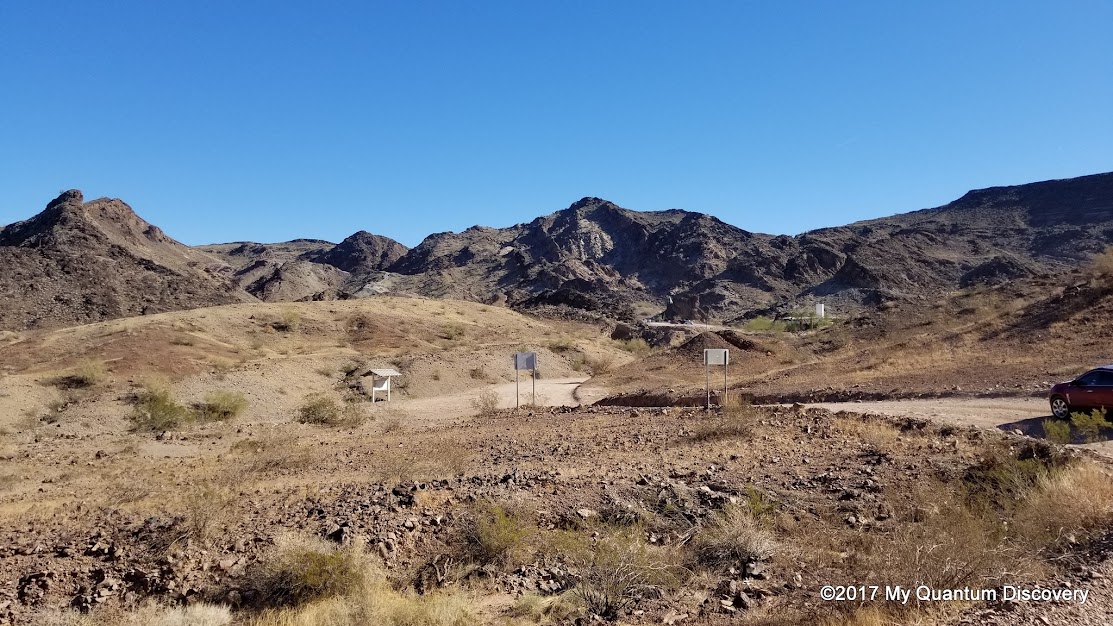 Located on land that was once a mining camp, in the middle of the Buckhorn Mountains, the Desert Bar, aka The Nellie E Saloon, (named for a mining claim) was conceived, designed and constructed by Ken Coughlin who purchased the land sight unseen in 1975. Over the past 43 years, it has evolved from a five-stool operation to a sprawling multi-level tourist-friendly bar that is so popular it causes minor weekend traffic jams.

Yes, he built it and we, along with hundreds of others, came. And they continue to come every weekend between the hours of noon to 6 p.m. every Saturday and Sunday from Sept. 30 to April 29 (it is closed in the summer due to the heat). But for Ken, the summer is his busiest time, for this is when he works on his dream as well as his house, doing all of the construction himself.

To get there from Quartzsite, all we had to do was hitch a ride with Andy and George in their 4WD truck, travel an hour on AZ-95N, turn right on Cienega Springs Road (note the sign that says “primitive road, no maintenance, proceed at your own risk”), drive for five miles at a snail’s pace over sharp-tipped rocks thrust from the ground like shrapnel while being jostled around by the ruts and potholes on that dusty primitive road through the middle of an uninhabited desert. Whew, hope this place is worth all that! 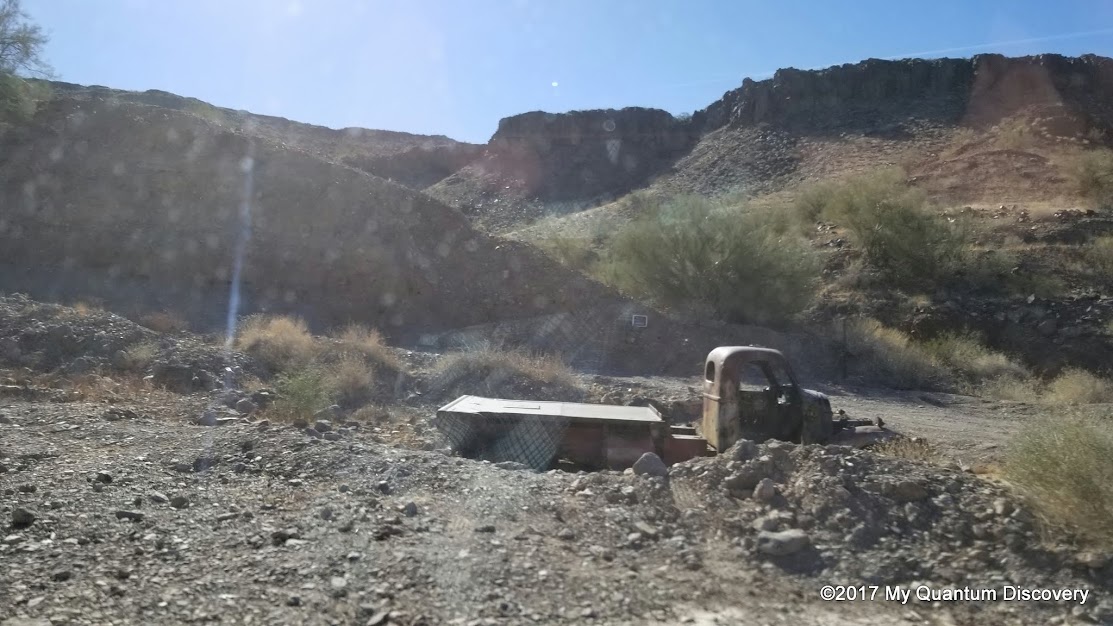 Denise and Dave were behind us. Denise took a video of the drive to the Bar – she obviously sped up the video – trust me, we weren’t going that fast! 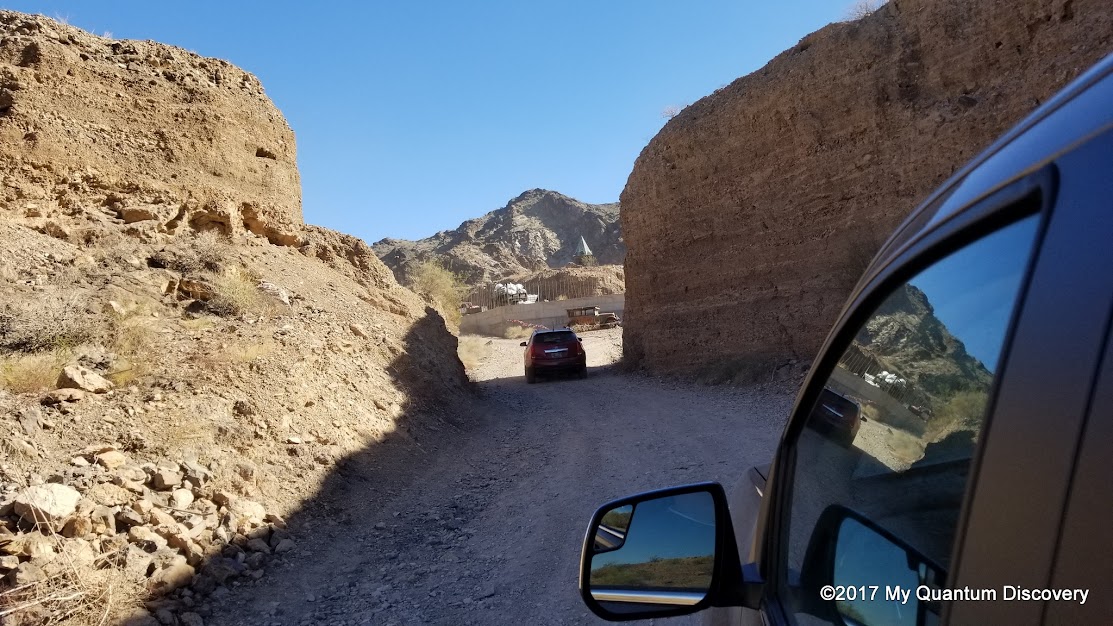 According to Ken’s website, “when the bar first opened, he hauled water in a 50 gallon tank loaded on the back of his truck. Then he purchased an old fire truck to haul water. In 1989, he started using a well in the canyon as his water source. In the summer of 1997, Ken drilled a new well on the north side of the saloon that operates on solar power with a pump set at 360 feet.” Speaking of solar, the entire place is solar powered with a massive array of PV panels, no public utilities out here! 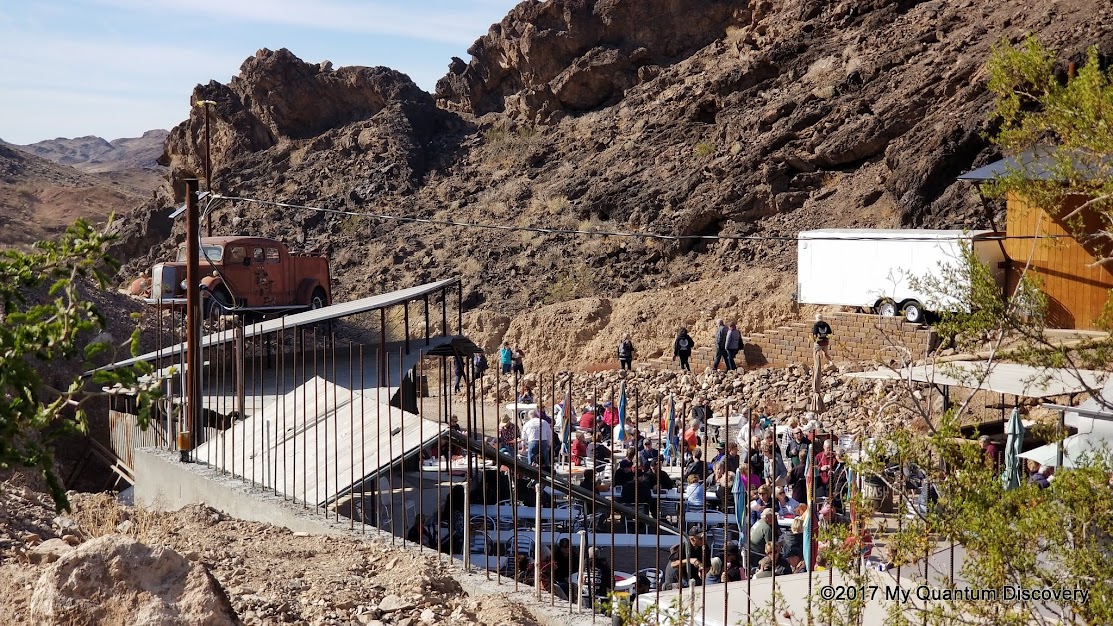 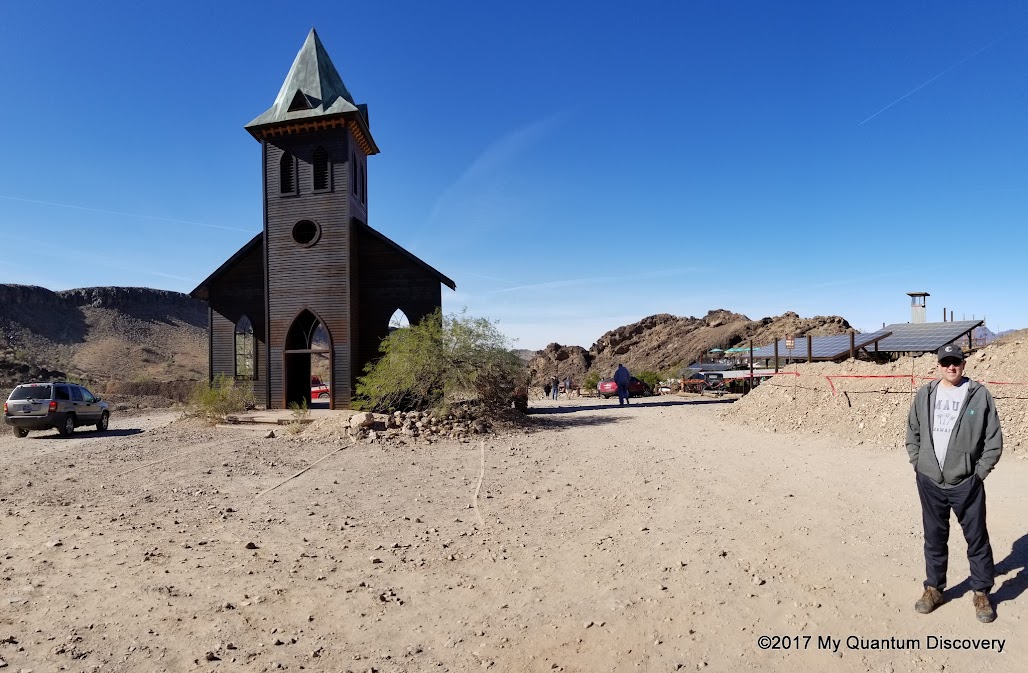 We had no idea what to expect but it certainly wasn’t what we saw as we turned into the parking lot. A church? Huh? Is this for the people who have had too much to drink? Started in 1993 and completed in 1996, the church is made of solid steel with a copper roof. Inside it has walls and ceiling made of the same stamped tin that is used inside the bar. Although there are no religious services offered here, it is a unique place for weddings and great for photos. 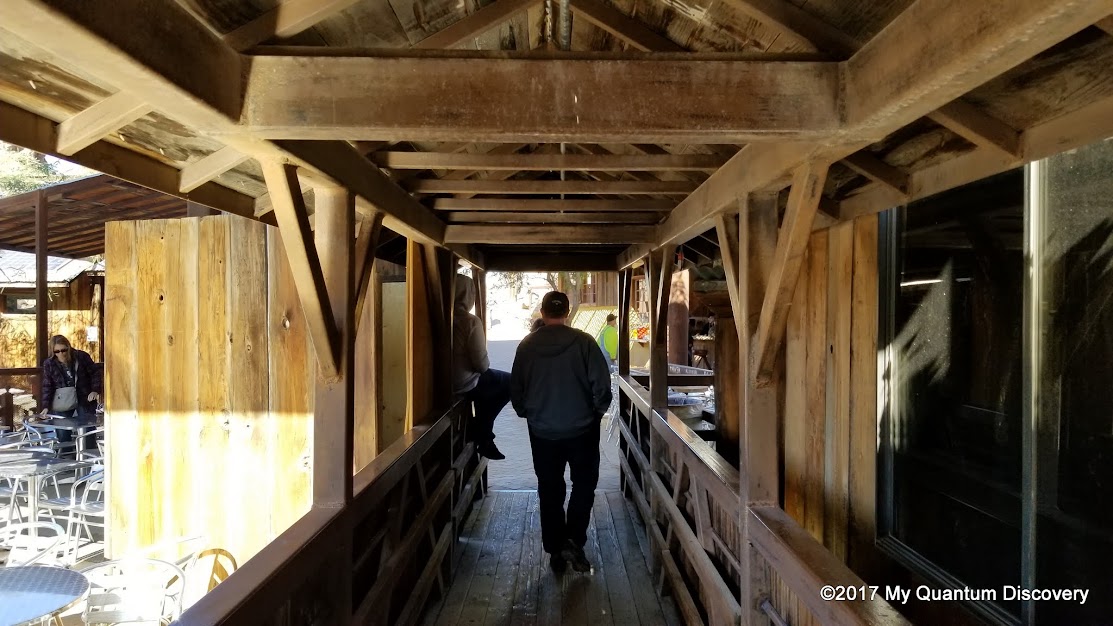 Even though the official opening time is noon, when we arrived at 10:45 a.m., the parking lot was pretty full.  A walk across a wooden pedestrian bridge spanning the bar’s lower patio brings you into the saloon. Since we had never been here, we followed the rest of the other Entegra owners heading for a long table downstairs. 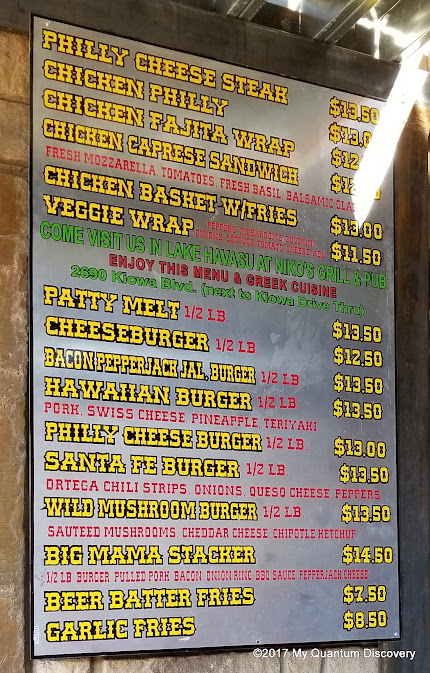 Then we got in line at one of the food windows to place our lunch order. Tough decision but we both ordered a 1/2 lb bacon, pepperjack, jalapeno burger ($13.50) and an order of fries. While I waited at the pickup window, Rob went back upstairs to get us a couple of beers. Besides the menu shown in the photo above, also available are additional items like Tri-Tip, a Rib-Eye Sandwich, some sort of giant pretzel for $12 and numerous other goodies. 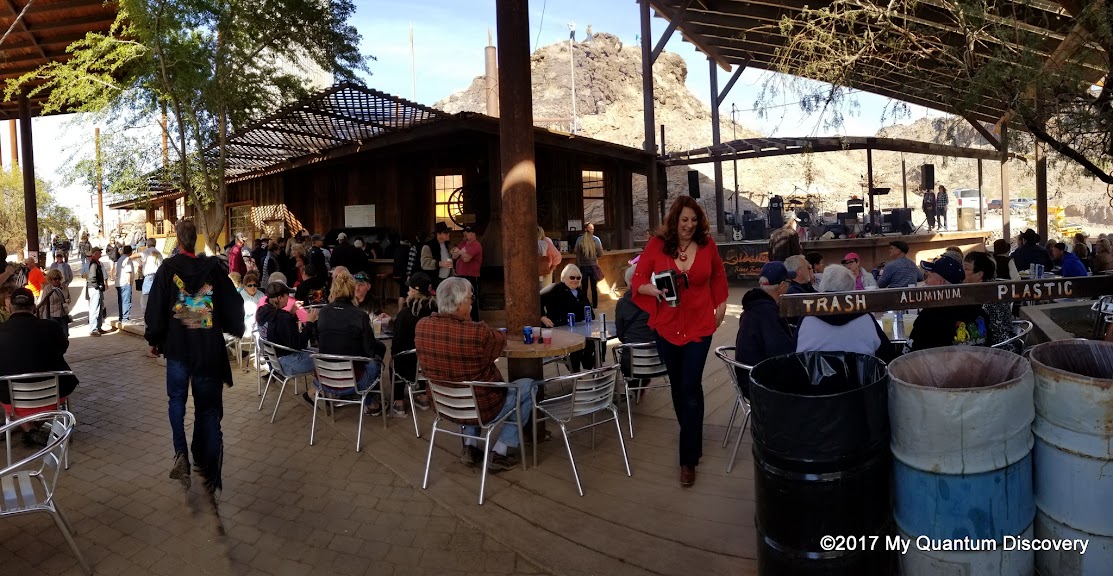 Oh, my, what huge burgers! Our expectation was that the food would be mediocre at best but what a pleasant surprise, the food was quite good! 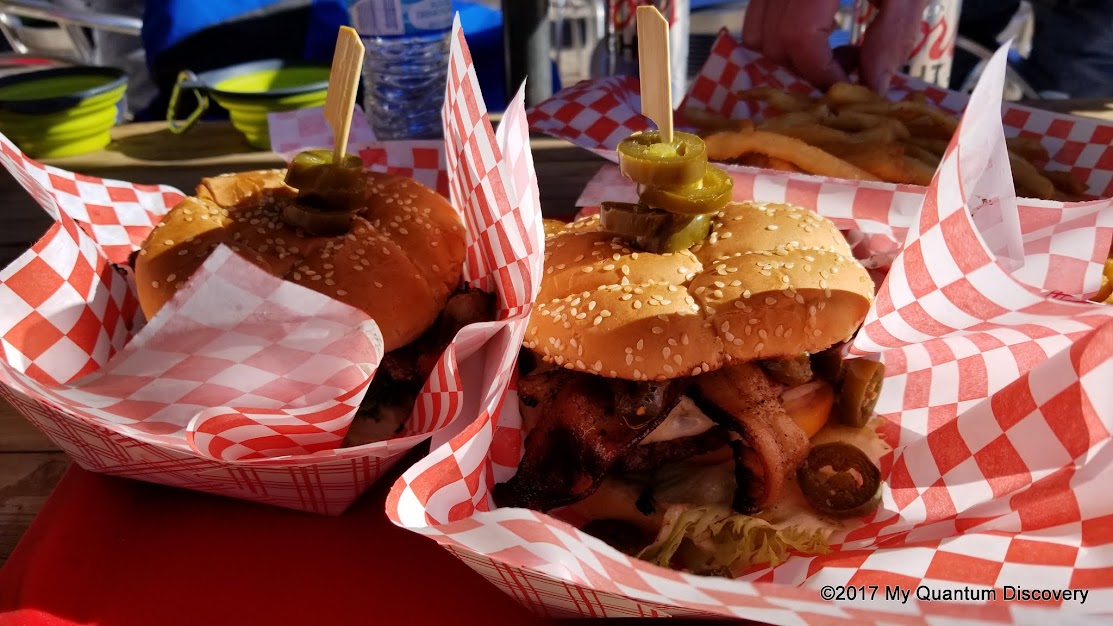 By the time we left our table, it was really crowded with long lines at the food window. Glad we got there early. After lunch, we headed back upstairs where the Sidewinder River Rattler Band was playing. They seemed quite good.

Outside we wandered around, checking out the outside patio. Then we climbed up on one of the ridges to take some photos in an attempt to capture what this place was like which was pretty hard to do.

Finally it was time to head back to Quartzsite. Quite the experience to say the least! Similar to Quartzsite, guess it’s another one of those things that you have to do at least once! 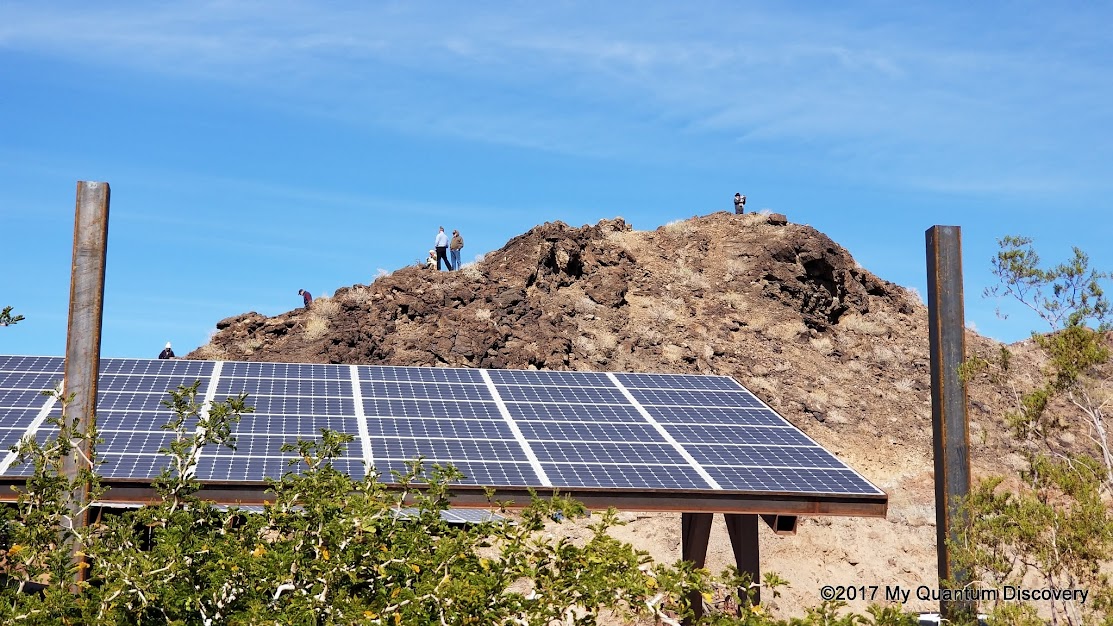 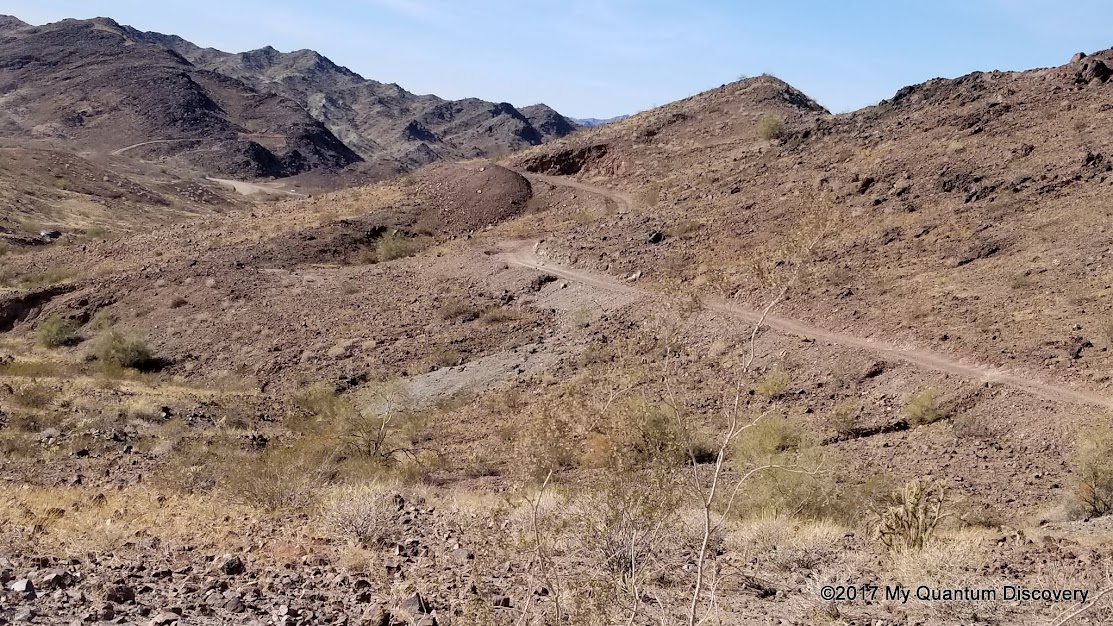