Because of the enormous size of the park, exploring Death Valley requires a lot of driving, thus racking up a lot of miles. And a lot of miles meant that filling our gas tank midway through our stay was quickly becoming a necessity. But paying the exorbitant prices at the local Furnace Creek gas station where gas was close to $7 per gallon. No way! Instead another option would be to combine a scenic drive, a stop at a ghost town and a stop to feed our thirsty gas tank in Beatty, NV about 52 miles northwest of Furnace Creek. Gas Buddy showed a price of $3.81, a $2.89 per gallon savings! Who would say no to that deal! 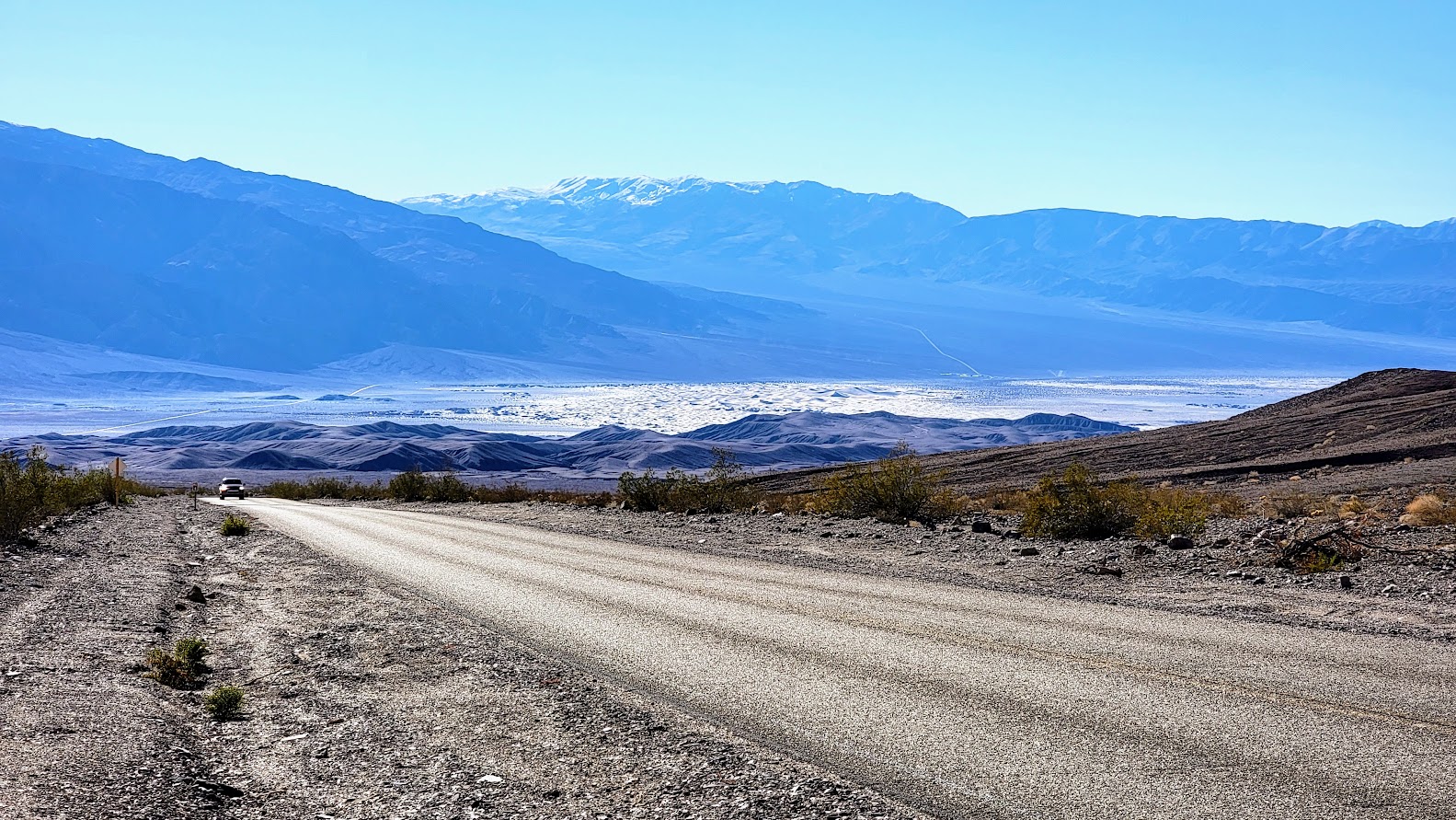 Our route would take us along CA-190W to Daylight Pass Road (Highway 374) to Chloride Cliff Road where we would make a quick stop to explore the ghost town of Rhyolite, NV. 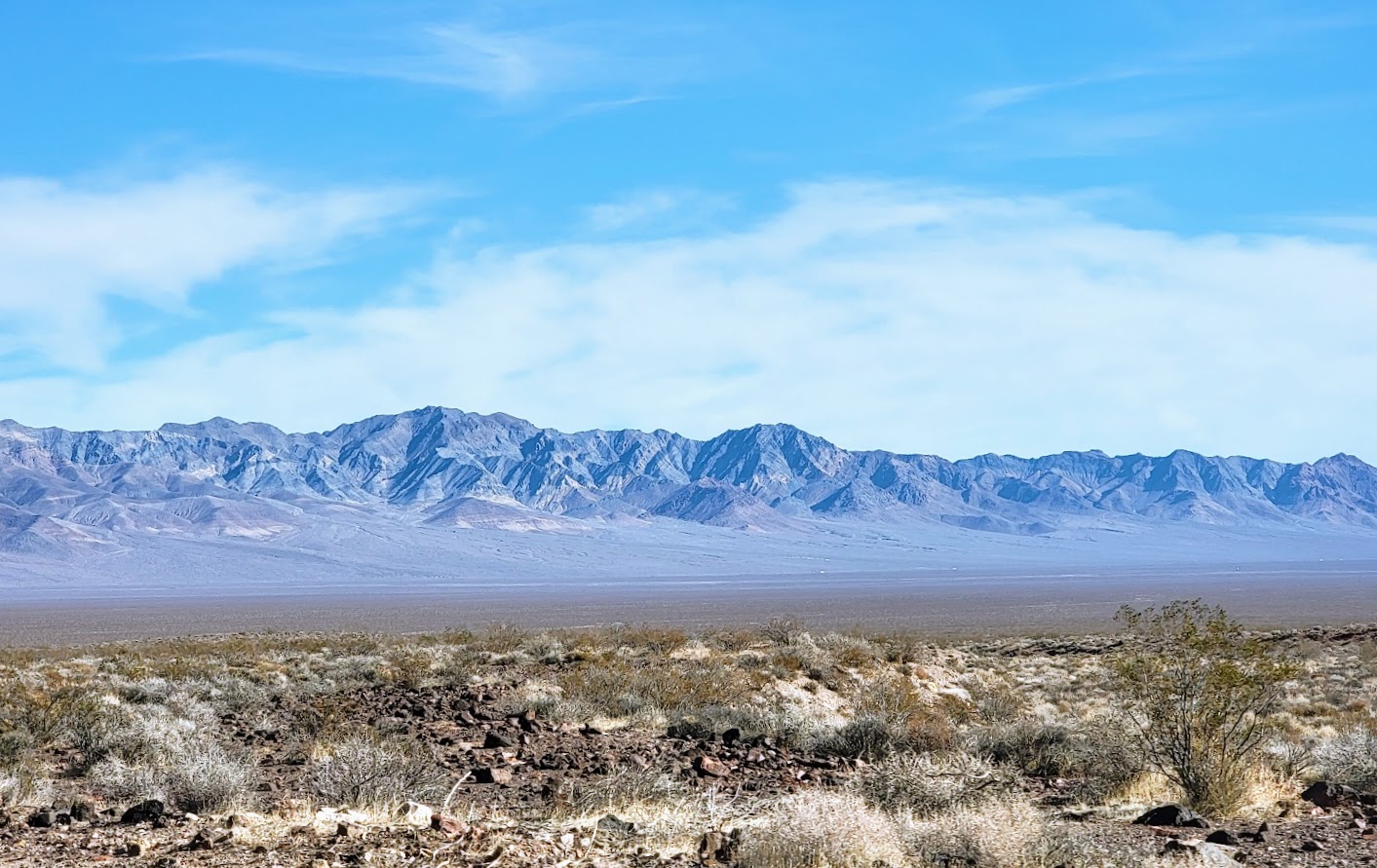 We had views of towering Corkscrew Peak (5,804 ft) located in the Grapevine Mountains and named for its shape, loosely resembling a corkscrew. 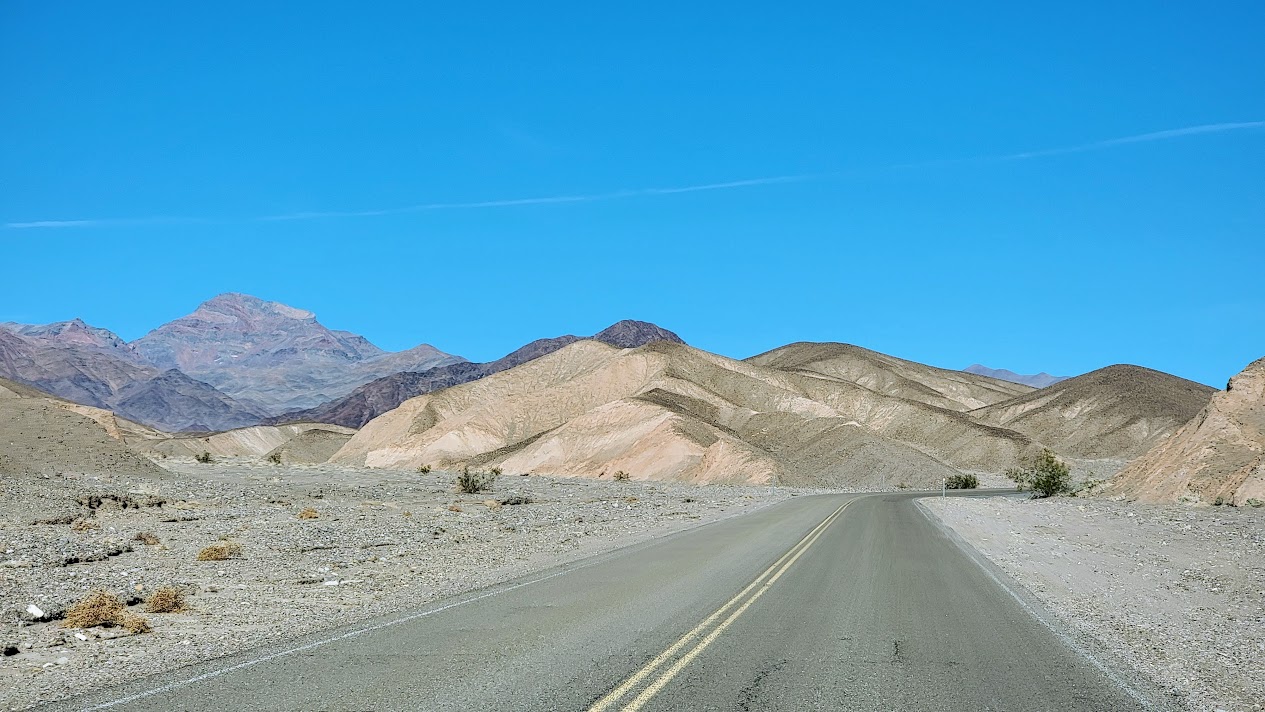 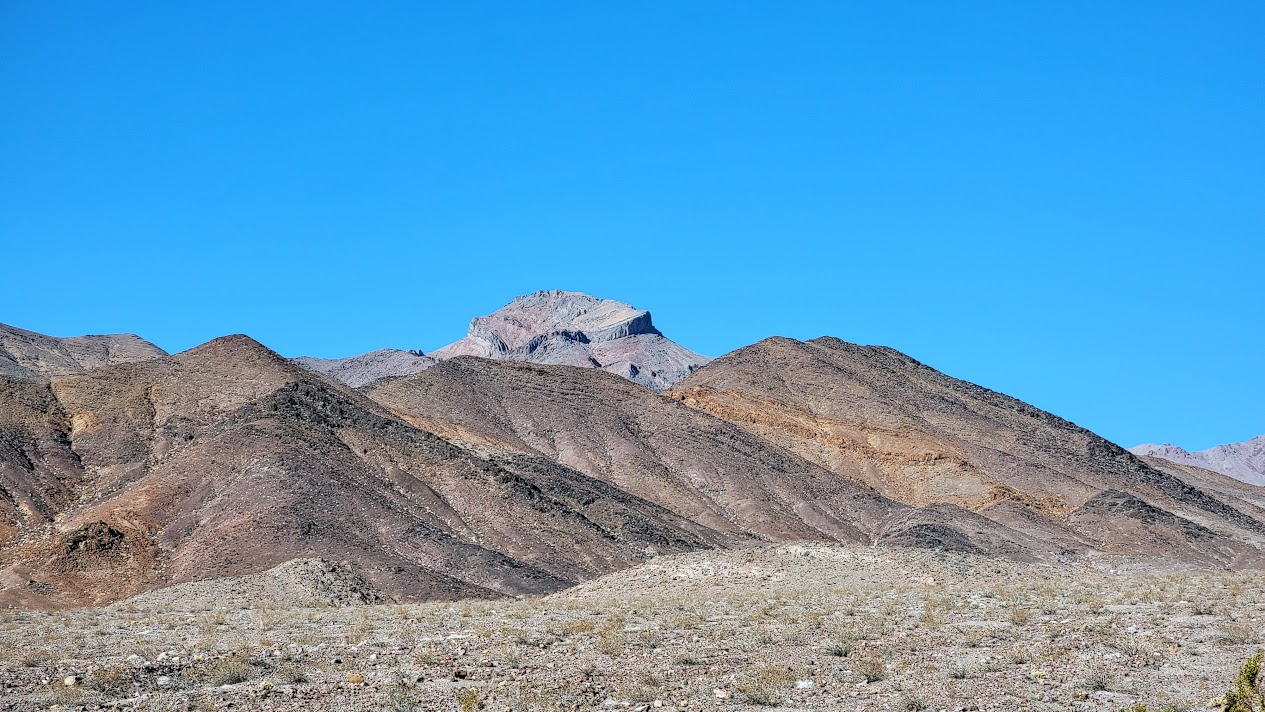 Daylight Pass is a high mountain pass at an elevation of 4,317 ft above sea level. 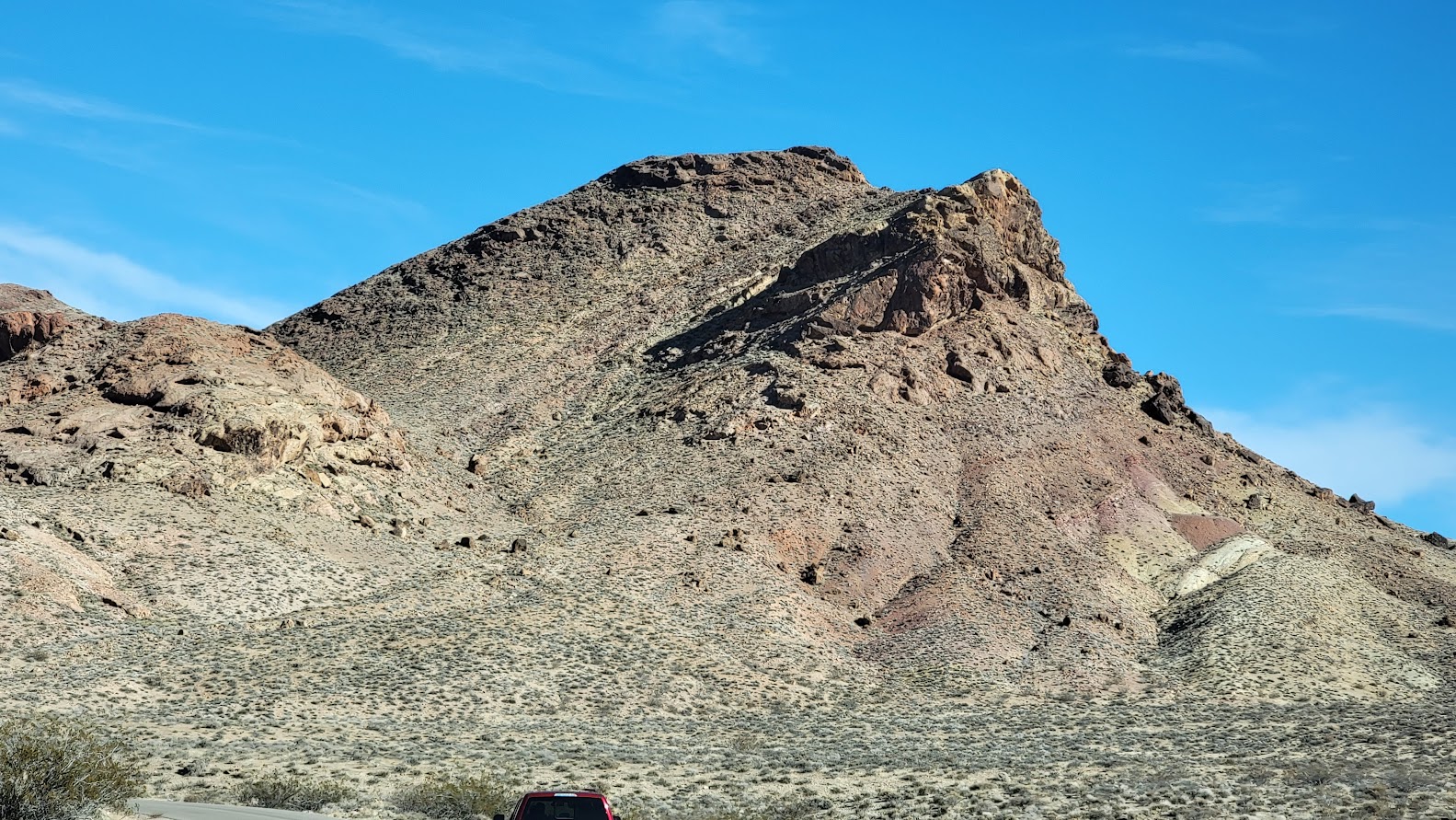 Here’s a quick 2:00 minute video as we approached the ghost town.

Located in the Bullfrog Hills, the town of Rhyolite, named for an igneous rock, began early in 1905 as one of several mining camps that sprang up after a prospecting discovery in the surrounding hills. 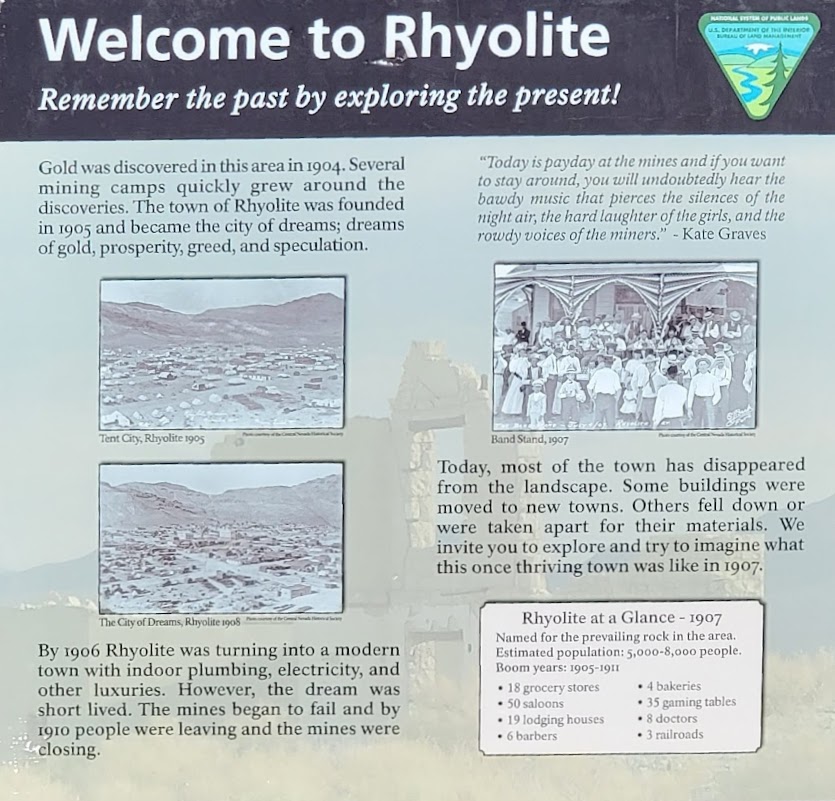 Thousands of gold-seekers, developers, miners and service providers flocked to the Bullfrog Mining District seeking their fortune. In 1906 Industrialist Charles Schwab invested in the infrastructure of the town so by 1907, Rhyolite had electric lights, water mains, telephones, newspapers, a hospital, a school, an opera house, and even a stock exchange. 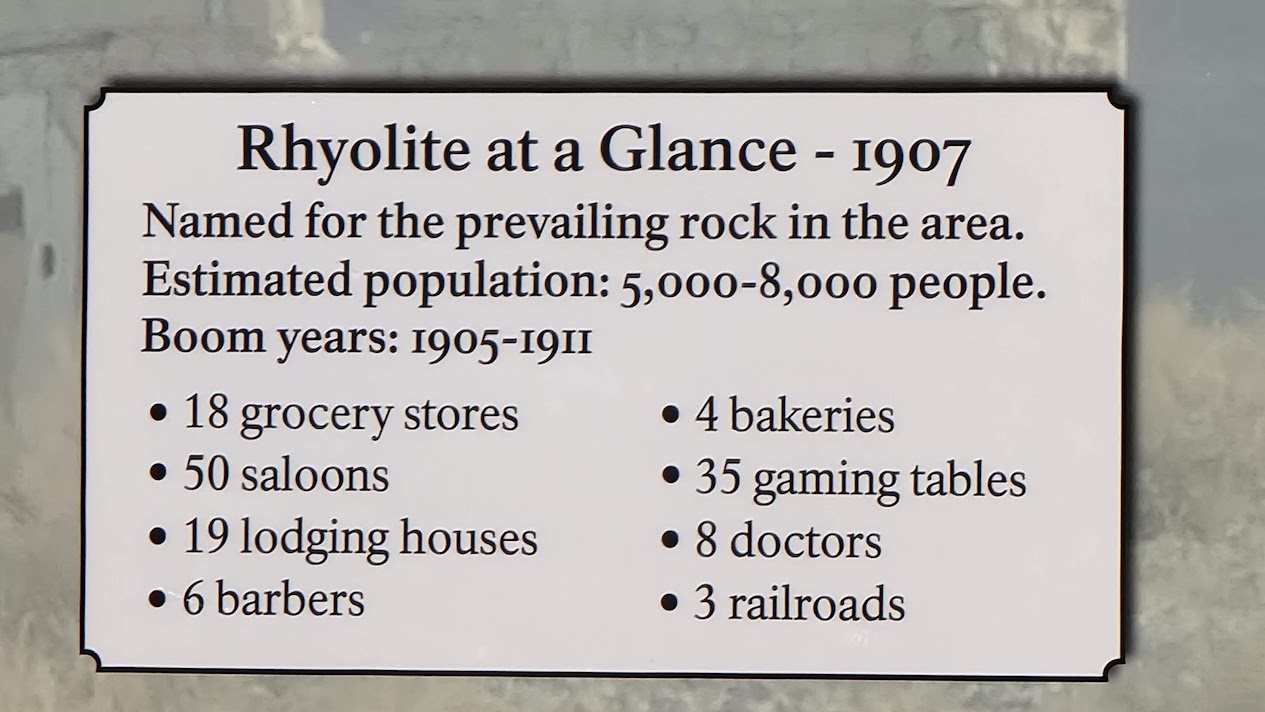 But the rise of the town was short lived, after producing more than $1 million in bullion in its first three years, the mine closed in 1911 causing businesses to fail and the population to dwindle as miners moved elsewhere. Within a year the town was “all but abandoned”, buildings crumbled or were moved and by 1920, the population was close to 0. After 1920, Rhyolite and its ruins became a tourist attraction and a setting for motion pictures.

Today the historic town is maintained by the Bureau of Land Management, and is “one of the most photographed ghost towns in the West”. Ruins include the railroad depot and other buildings, and the Bottle House, which Paramount Pictures restored in 1925 for the filming of a silent movie, The Air Mail.  The 1964 film, The Reward  and the 2004 film, The Island both feature the ruins of the Cook Bank building. The 1987 science-fiction movie Cherry 2000 depicting the collapse of American society as well as the 1998 film Six-String Samurai were also filmed here.

The Bottle House was our first stop which was built by Australian Tom Kelly in 1906. 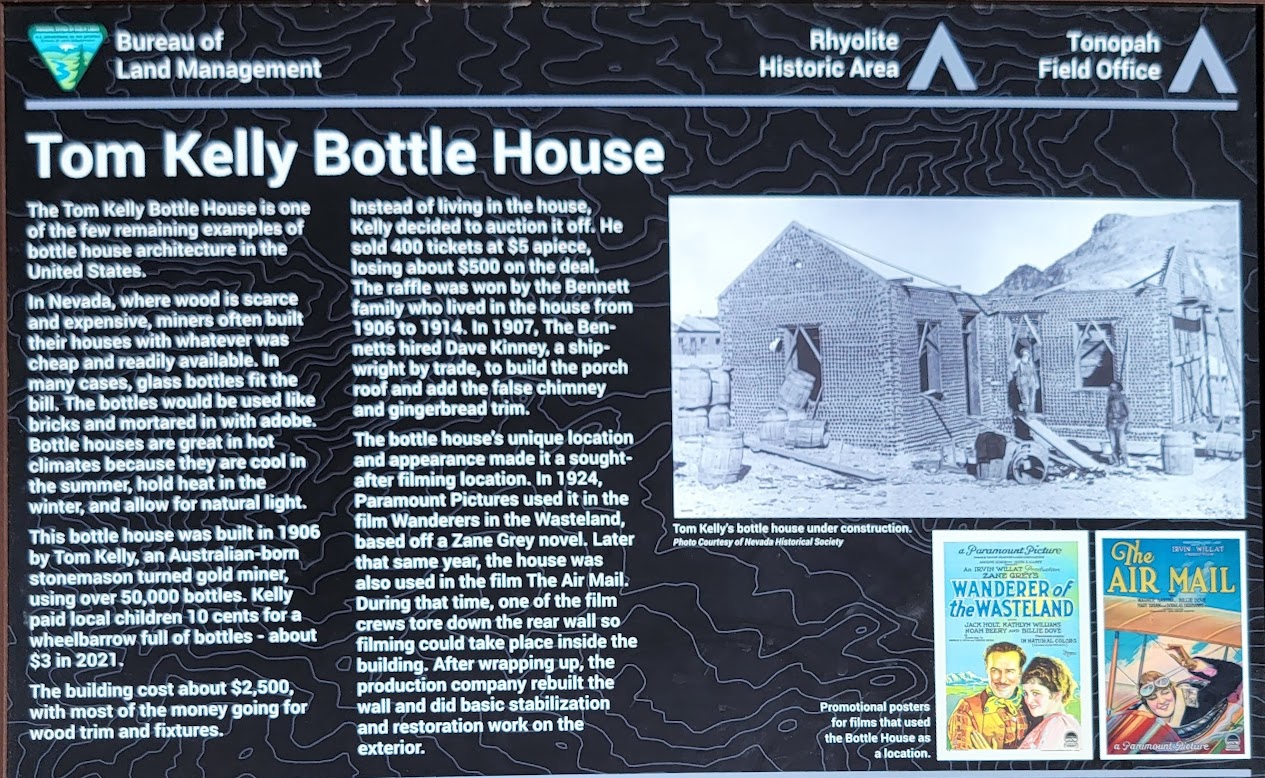 With the only available lumber the ill suited Joshua tree, Kelly decided to use adobe mud to hold together 50,000 glass bottles (which he collected from the 50 bars in town in less than six months) for his three room, L-shaped home. After completing the house, he decided not to live in it, instead raffling it off for $5 a ticket. The house was won by the Bennet family, who lived inside until 1914. The house got a new roof in 1925 when Paramount Pictures used it in a movie set.

In 1906, the Las Vegas and Tonopah Railroads started running trains here. The station was a Spanish-style building that cost $130,000 to build. In 1930, the building became a casino and bar until it became a museum and souvenir shop, remaining open until the 1970’s. 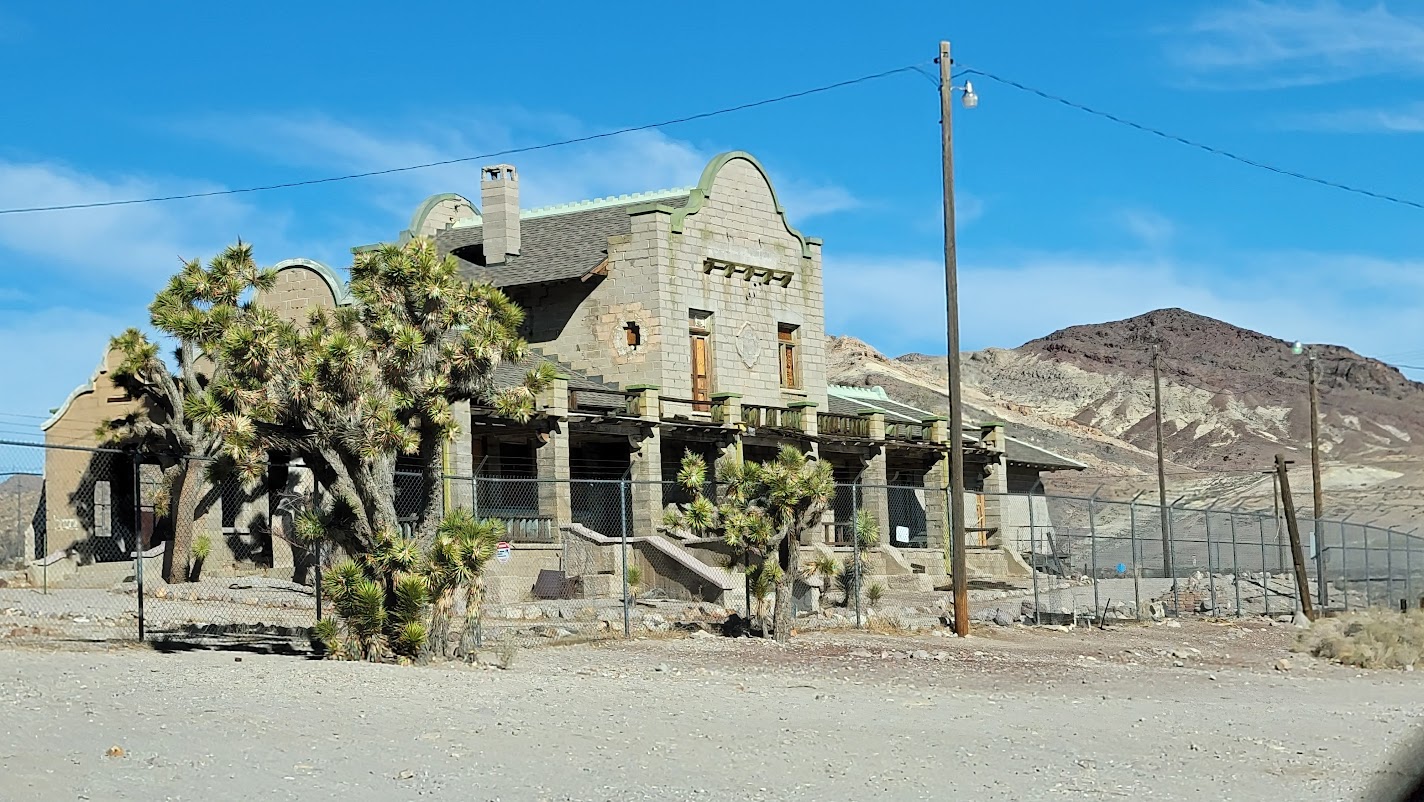 Sitting across from the train depot are the remains of a caboose which had been turned into a house during the gold rush. During the tourist boom in the 1920’s, it was used as a gas station. 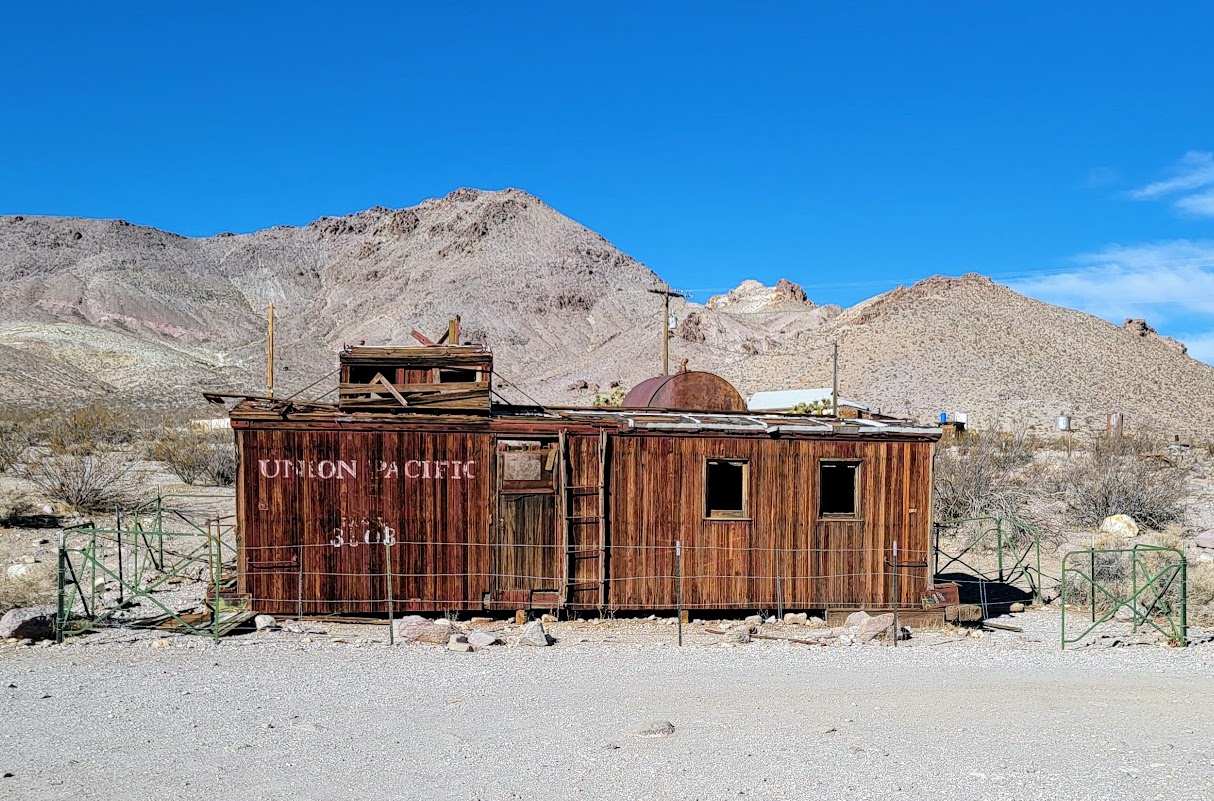 Hard to imagine but Cook’s Bank was once the tallest and largest building in town, costing its owner $90,000 to build. 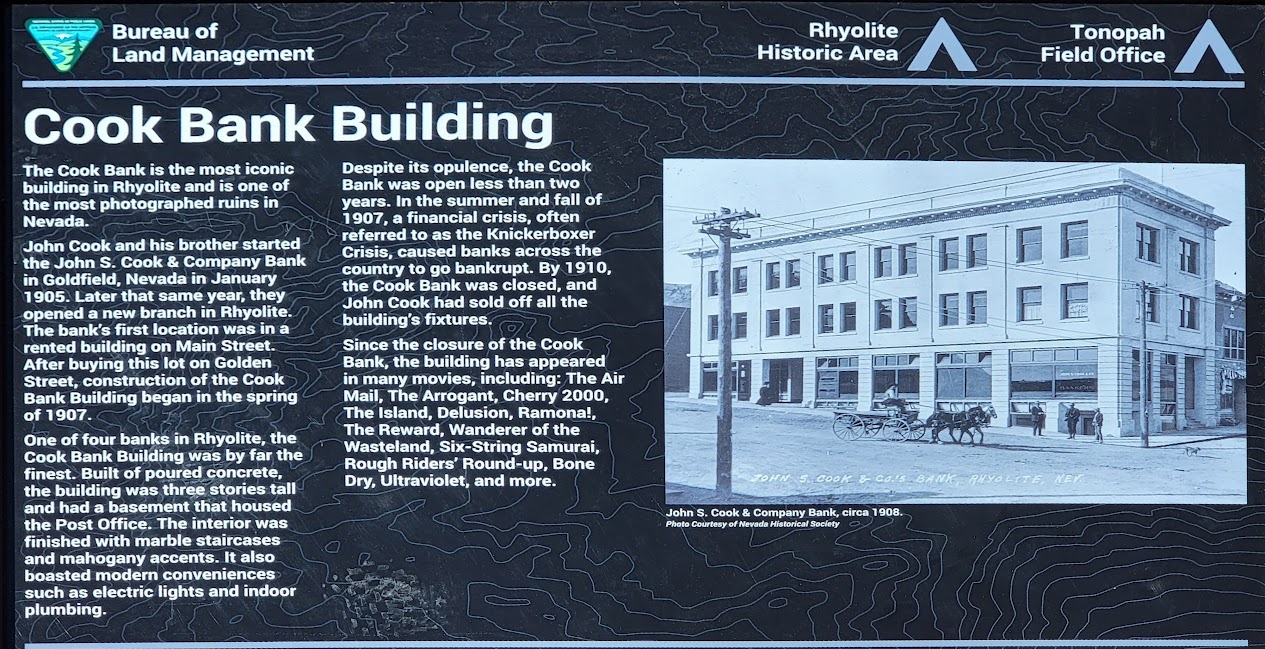 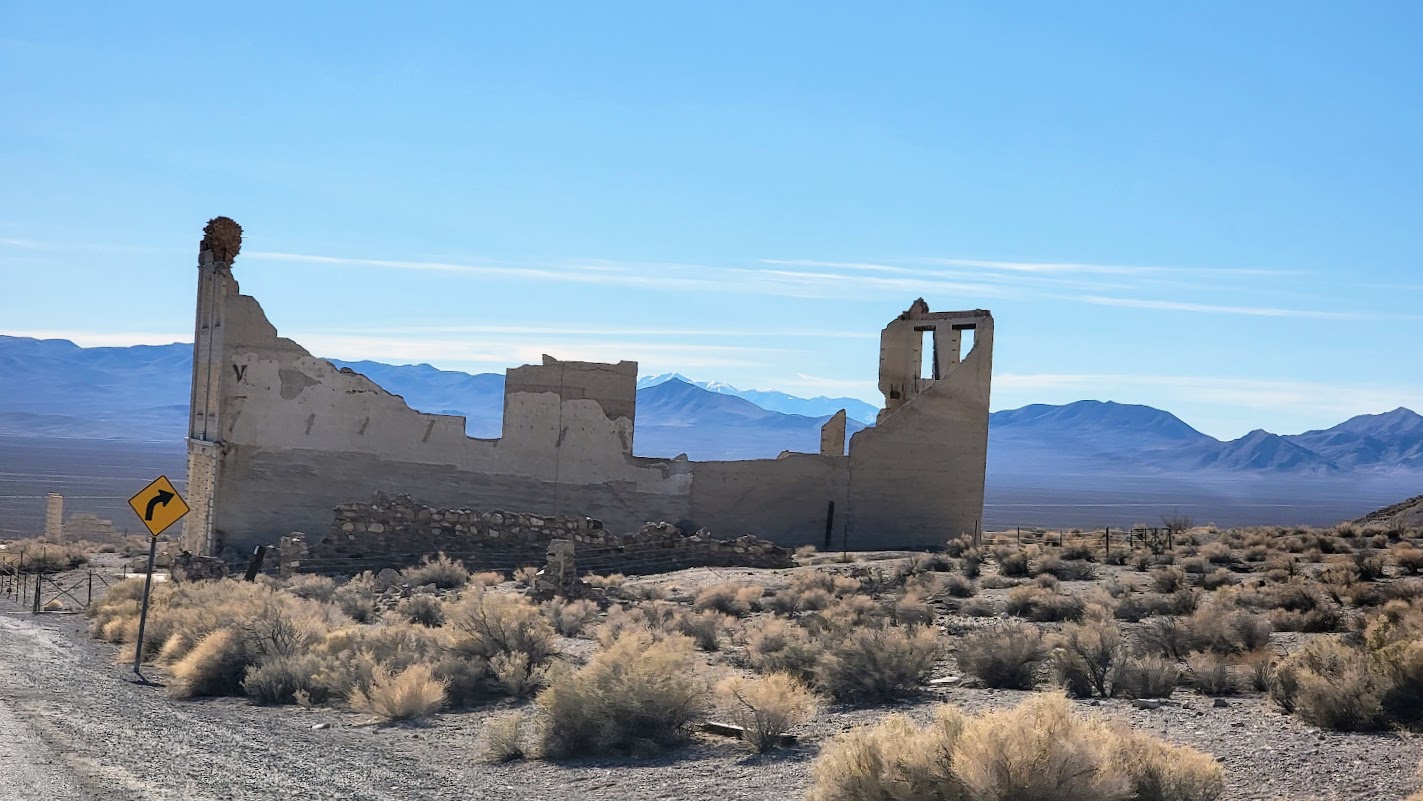 At its peak, the schoolhouse held more than 200 school children. 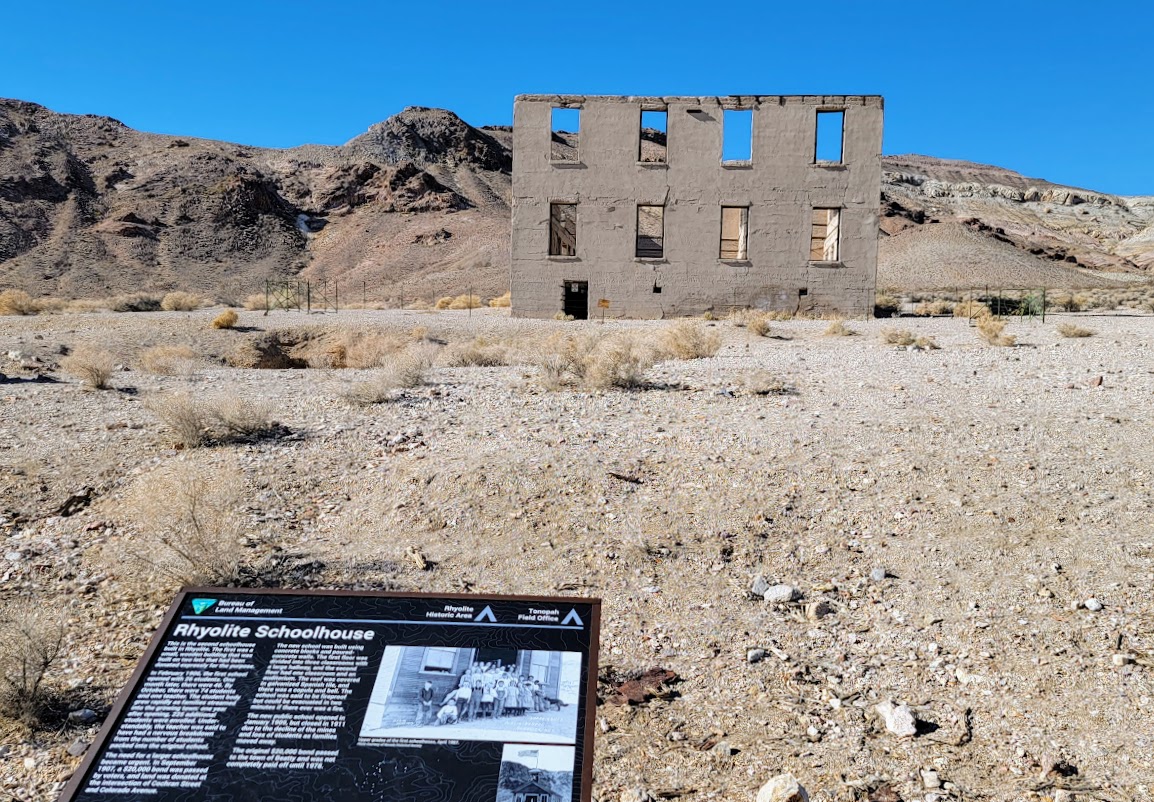 There were several other buildings but we didn’t take photos of all of them. 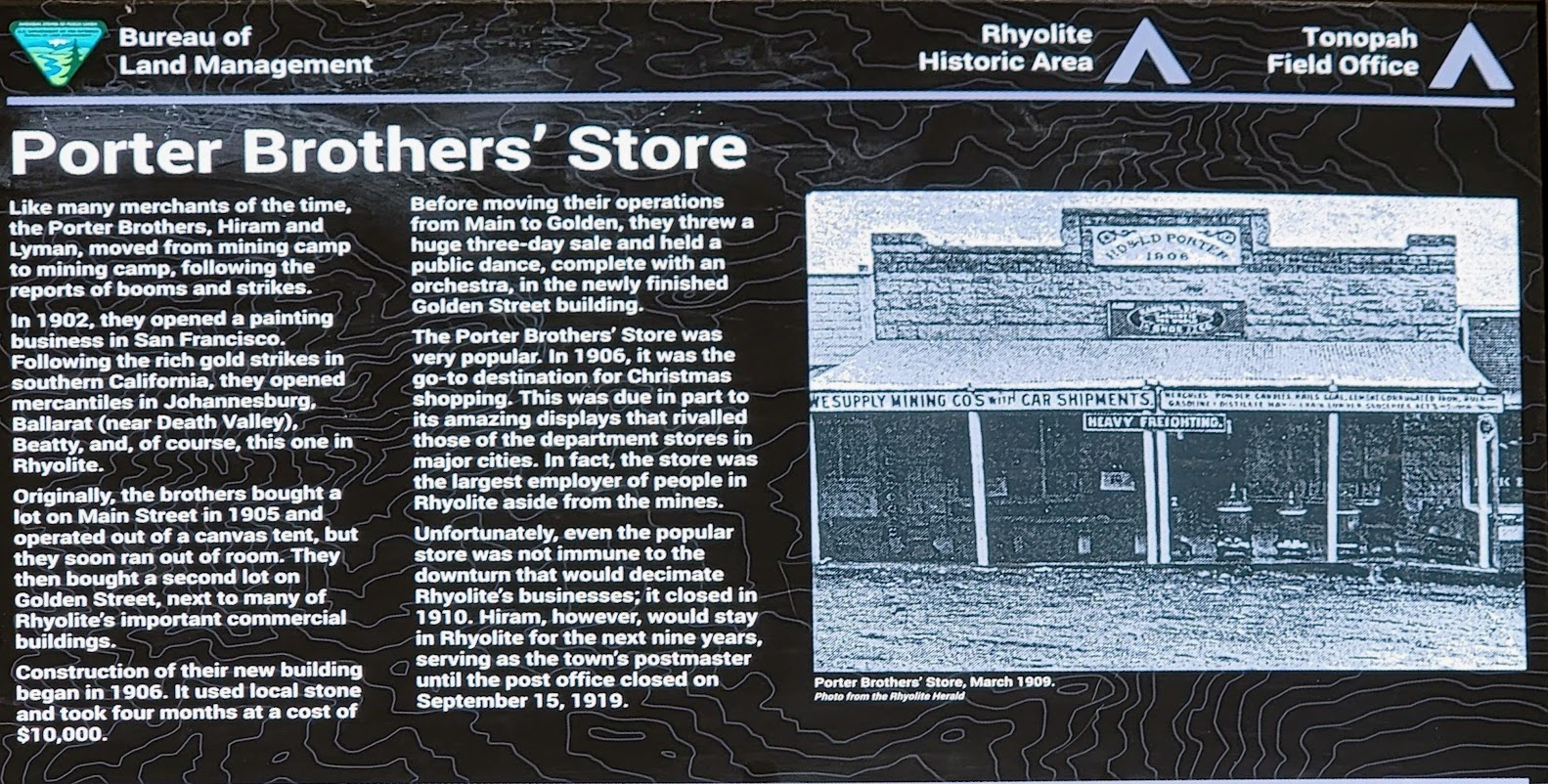 Growing tired of looking at ruins and knowing Red, our Jeep, was getting irritable because it was thirsty, we headed back to the main road to continue our journey to the town of Beatty which was only four miles to the north. 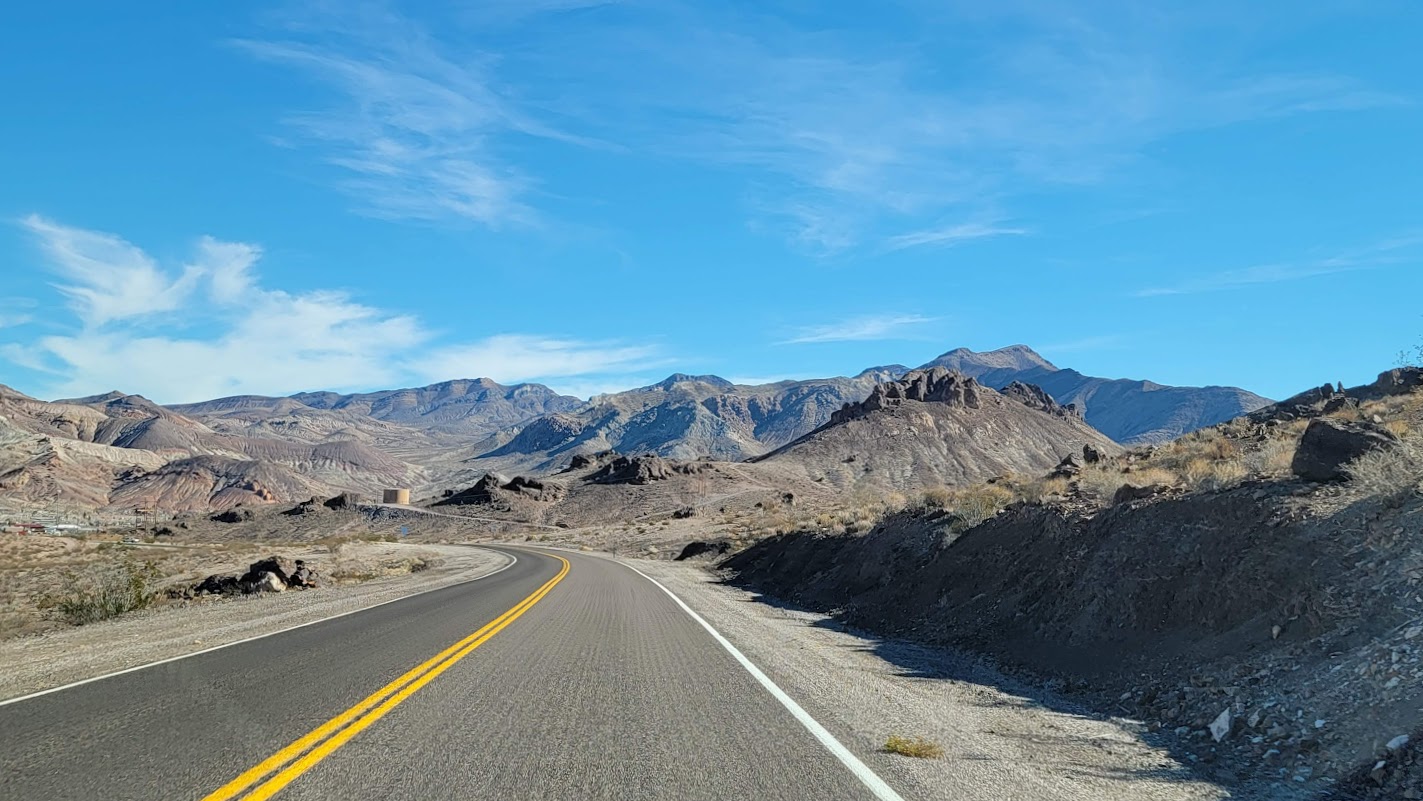 As we neared the town, instead of the usual two dimensional sign, there was an iron sculpture with a silhouette of a miner with a pickaxe and a mule saying “Welcome to Beatty, The Gateway To Death Valley“. Looked very cool against the backdrop of the colorful mountains.

Located on the crossroads of Hwy. 95 and State Route 374, Beatty which is only one square mile in size does offer easy access to Death Valley National Park. Beatty sprang to life in 1904 from the nearby gold discoveries and quickly started to grow. But once again that growth was short lived. Named for Montillius (Old Man) Beatty, a rancher, miner and the town’s first postmaster, what kept the town alive when so many other towns like Rhyolite and Bullfrog disappeared into the dust is the fact that it had a plentiful water supply, thanks to the Amargosa River and a number of springs in the area.

Over the years, Beatty has had many faces, from mining, to being a railroad hub until 1940, to atomic bombs when a Nevada Test Site was established nearby in 1951, to tourism.

Although we weren’t there to do any extensive sightseeing, after we satisfied Red’s thirst at the gas station, we did a quick drive around town. BTW, our 17.12 gallon fill up in Beatty cost us $65.37. In Furnace Creek, it would have cost us $114.70. Yikes!

Small (population less than 1000), rustic and cute with a western flair was our first impression. Too bad we didn’t have time for more exploring because from what I have since read, the town has a lot to offer. Besides easy access to Death Valley National Park, it boasts 350 hotel rooms, 3 campgrounds, several restaurants, bars and saloons, hiking/biking trails, the Beatty Museum (free), Bailey’s Hot Springs (permanently closed), fishing, bird watching and wildlife viewing. 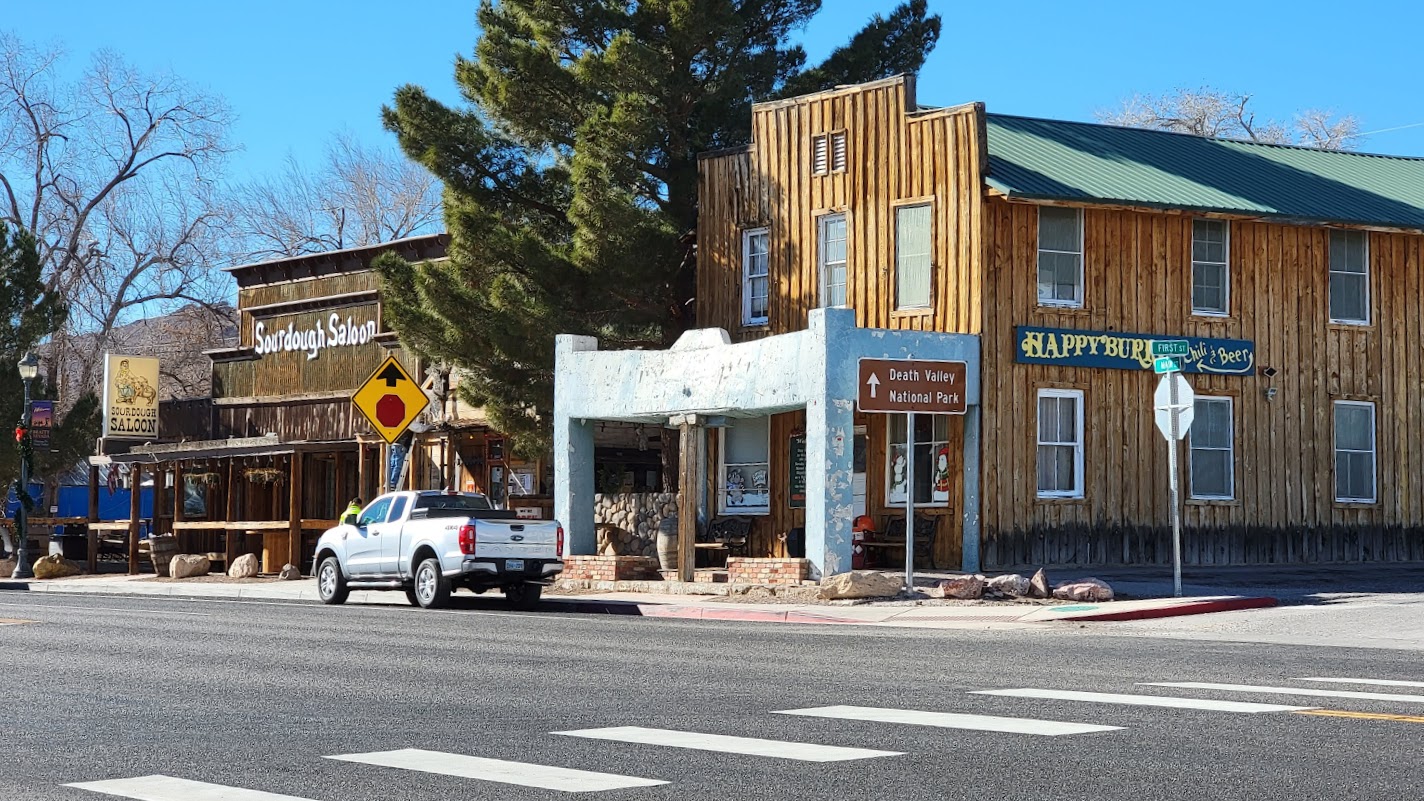 What really caught our eye was this huge mural of a Tidewater & Tonopah locomotive on the side of a building. At first we thought the mules on the right hand side were painted but then they moved!

It turns out that this building was a motel originally constructed in 1980 to accommodate defense contractors and military personnel who worked at the nearby Nellis Air Force Base working on a project for the Ford Aerospace Corporation . Nellis was home to top secret installations like the world famous Area 51 (Groom Lake), the Nevada Nuclear Test Site (where over 500 above-ground nuclear bomb tests were tested), and the Yucca Mountain Nuclear Waste Repository.

Initially the motel was named the Lori Motel but as atomic bomb testing was occurring close by, the hotel changed its name to the Atomic Inn/Phoenix Inn. According to their website, “it is a retro themed establishment reminiscent of the good ‘ol days when Eastern Europe was the Warsaw Pact and the United States was ready to ‘duck and cover’!” Interesting!

Leaving Beatty behind, we started our return drive but we weren’t done with sightseeing for the day, we had another destination in mind. Making this trip was definitely worth it – awesome scenery, a fascinating look back in history at a ghost town and to top all that off, major savings at the pump! What more could anyone ask for! 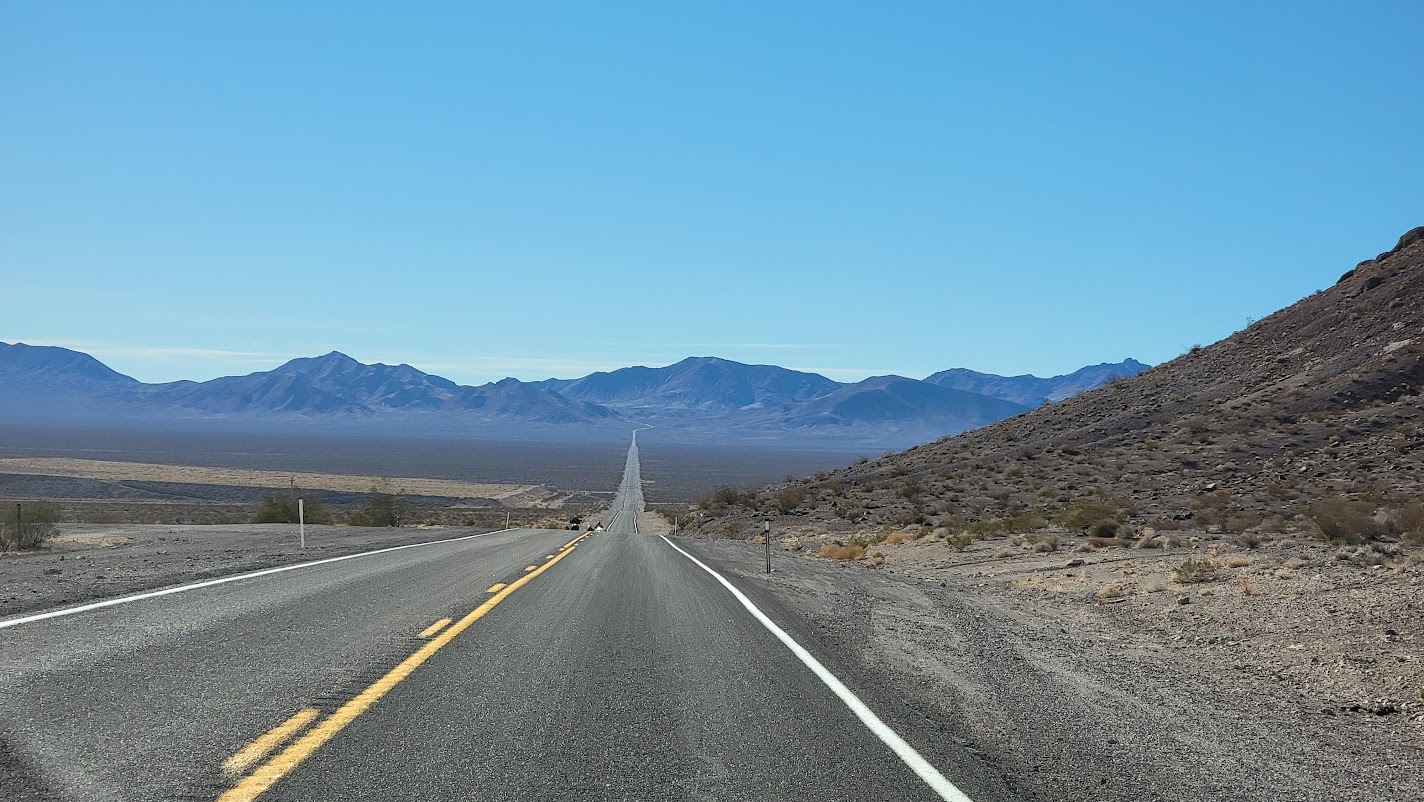 Our next post will reveal what else we did this day before returning to Furnace Creek.