Another day, another spectacular drive and another trip down Star Wars memory lane! Little did we know what an exciting day this would be! Bidding farewell to the ghosts of Rhyolite and the rustic town of Beatty, NV, off we went in search of our next adventure. At the intersection of Daylight Pass Road (Highway 374) and CA-190 instead of heading east back toward Furnace Creek, we headed southwest passing by two familiar spots, Mesquite Flat Sand Dunes and Stovepipe Wells. Beyond that as we entered new territory, it was mile after mile of incredible scenery as we headed towards the western edge of the park and our destination for the day – Father Crowley Vista Point in Rainbow Canyon or better known as Star Wars Canyon. The canyon is more than 5 miles long and up to 5,000 feet wide 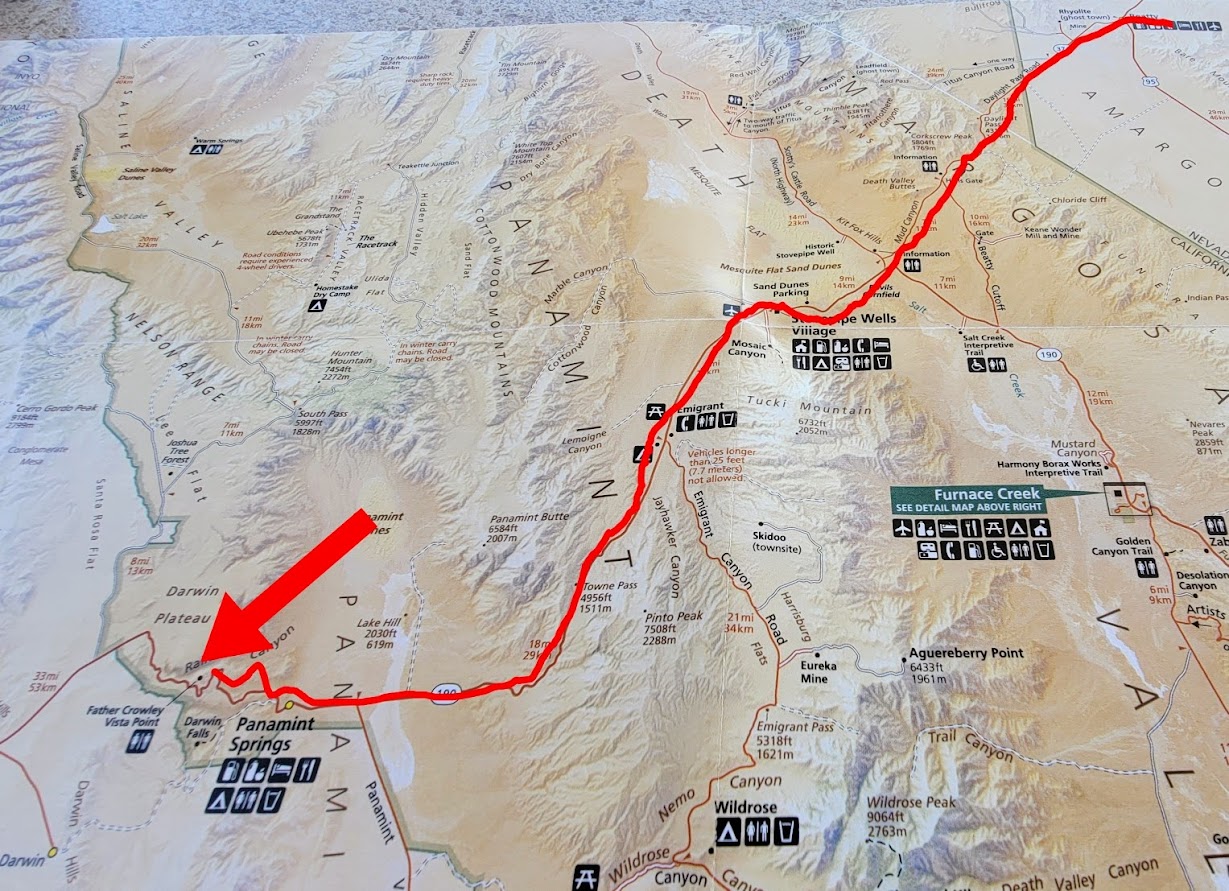 Although we were driving on a two lane, no shoulder road, it was a very cool drive with breathtaking and awesome scenery. 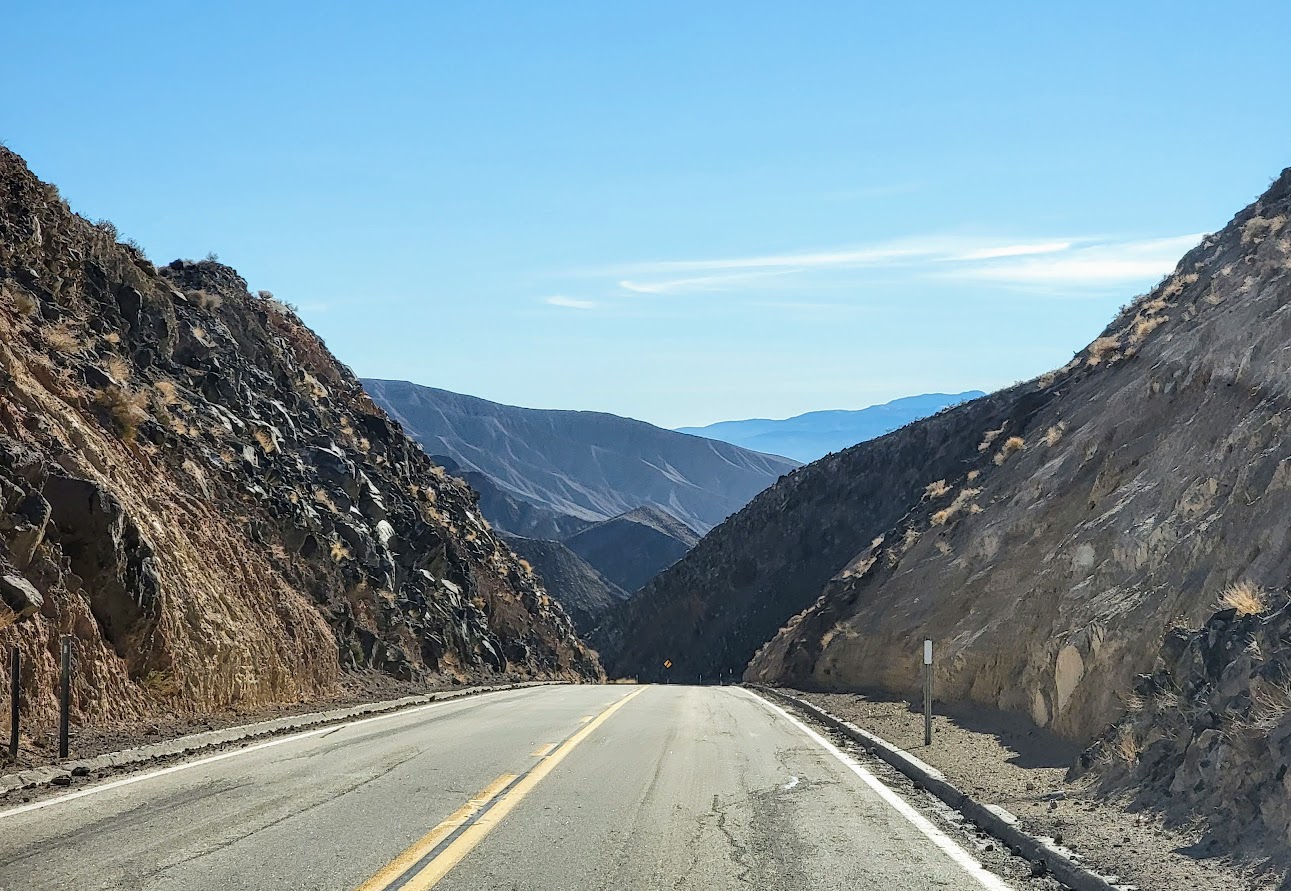 The landscape changed constantly from towering canyon walls to snow capped mountains in the distance to the flat open land of Panamint Valley generating lots of oohs and aahs from us! Initially anyway.

Then it changed even more dramatically as we ascended 3000 feet along the 8 mile stretch from Panamint Springs to the vista. Although breathtaking views, it was certainly not for the feint of heart (referring specifically to moi, who doesn’t like heights). Thank goodness Rob doesn’t mind driving (or maybe he does mind but won’t admit it).

Serpentine road twists, blind hairpin turns, steep 8% grades, few turnouts, that’s what I remember about the drive. Oh dear! Some people refer to it as the “road from hell”! I was praying silently that the drivers in oncoming cars were not texting and were paying attention to the road as they came about the turns. If not, hopefully the guard rail would prevent us from plunging to the bottom of the canyon! Rob must have sensed those prayers because he asked me several times “are you all right”? My nervous reply, stoically staring straight ahead, “yeah, as long as I don’t look!”. Not sure what he would have done if I replied “no”!

Whew, I breathed a sigh of relief as we pulled into the parking lot. Not totally relieved as I knew we would have to do it all over again on the return trip but oh well, best to enjoy the now moment and not think about what’s yet to come!

From World War II until 2019, Rainbow Canyon was commonly used by the United States Air Force and Navy for fighter jet training. Planes would travel through the canyon at 200 to 300 mph while flying as low as 200 feet above the canyon floor. Tragically in 2019, a jet crash in the canyon resulted in the death of the pilot and injury to several visitors in the area from the flying debris and temporarily put an end to training flights through the canyon.

As we neared the turn to the vista, suddenly a loud thundering roar scared the bejesus out of us, causing us to jump in our seats. There goes the culprit – a small jet shot into our field of vision for a few seconds. Wow! Had they resumed training we wondered? We would soon find out. 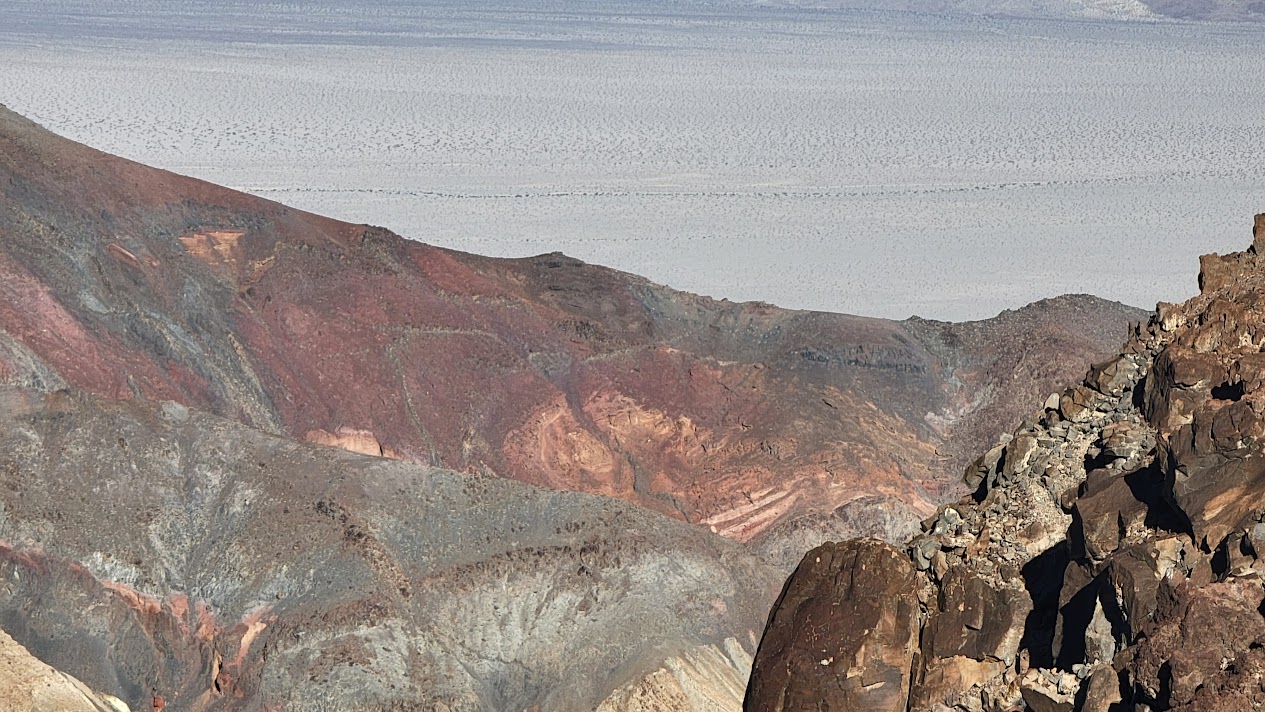 With its colorfully striped walls of reds, grey and pink, it was easy to see why the canyon was originally named Rainbow Canyon. In later years, visitors started to refer to it as Star Wars Canyon because of its similarity to the fictional planet Tatooine and the technical flight maneuvers that were practiced here. Several interpretive signs in the parking lot explained how the canyon was formed and the military training that occurred here. 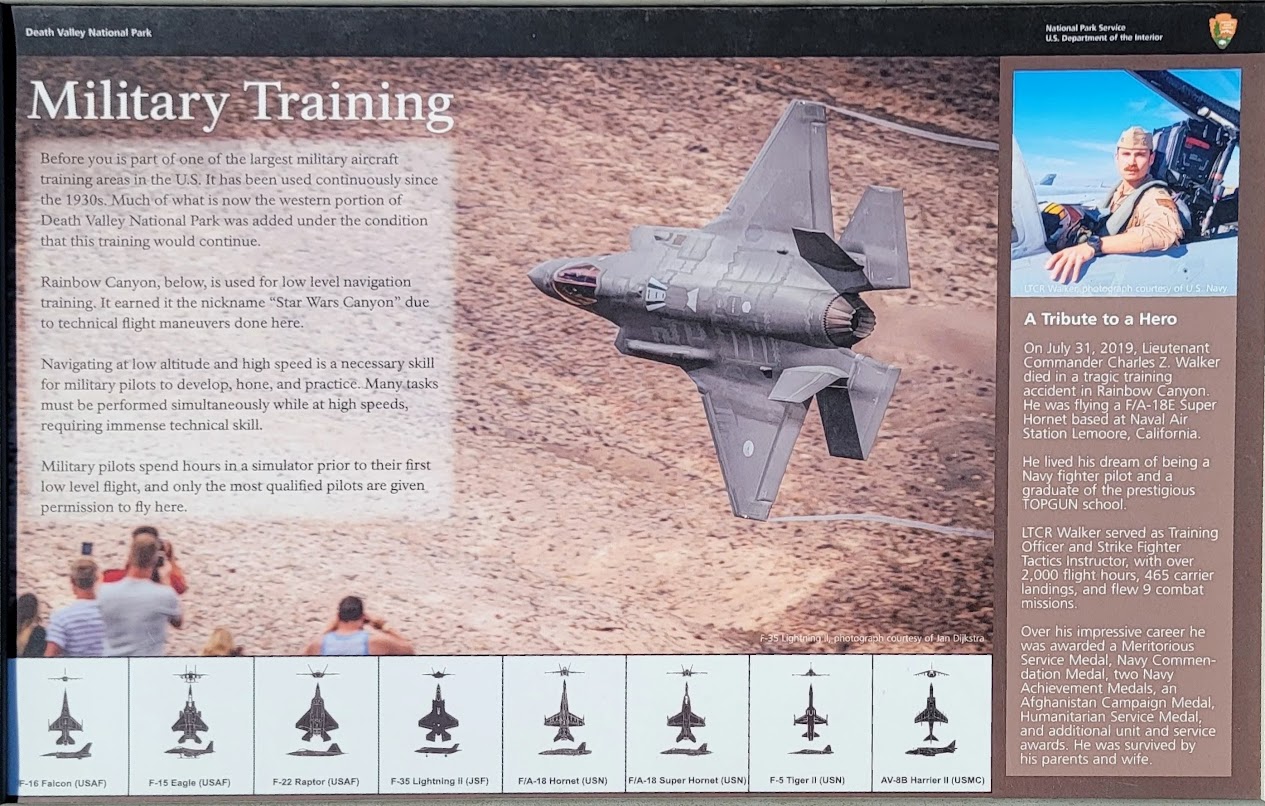 Father Crowley, also known as the Desert Padre, was a Catholic priest, responsible for ministering to the people of Inyo County Parish in the 1930s. After a long day of ministering, he would often stop at the point to soak in vistas of the desert. A monument dedicates the point to him where a plaque reads:

From the snowy heights of the Sierras beyond the deep shadows of Death Valley beloved and trusted by people of all faiths he led them toward life’s wider horizons. 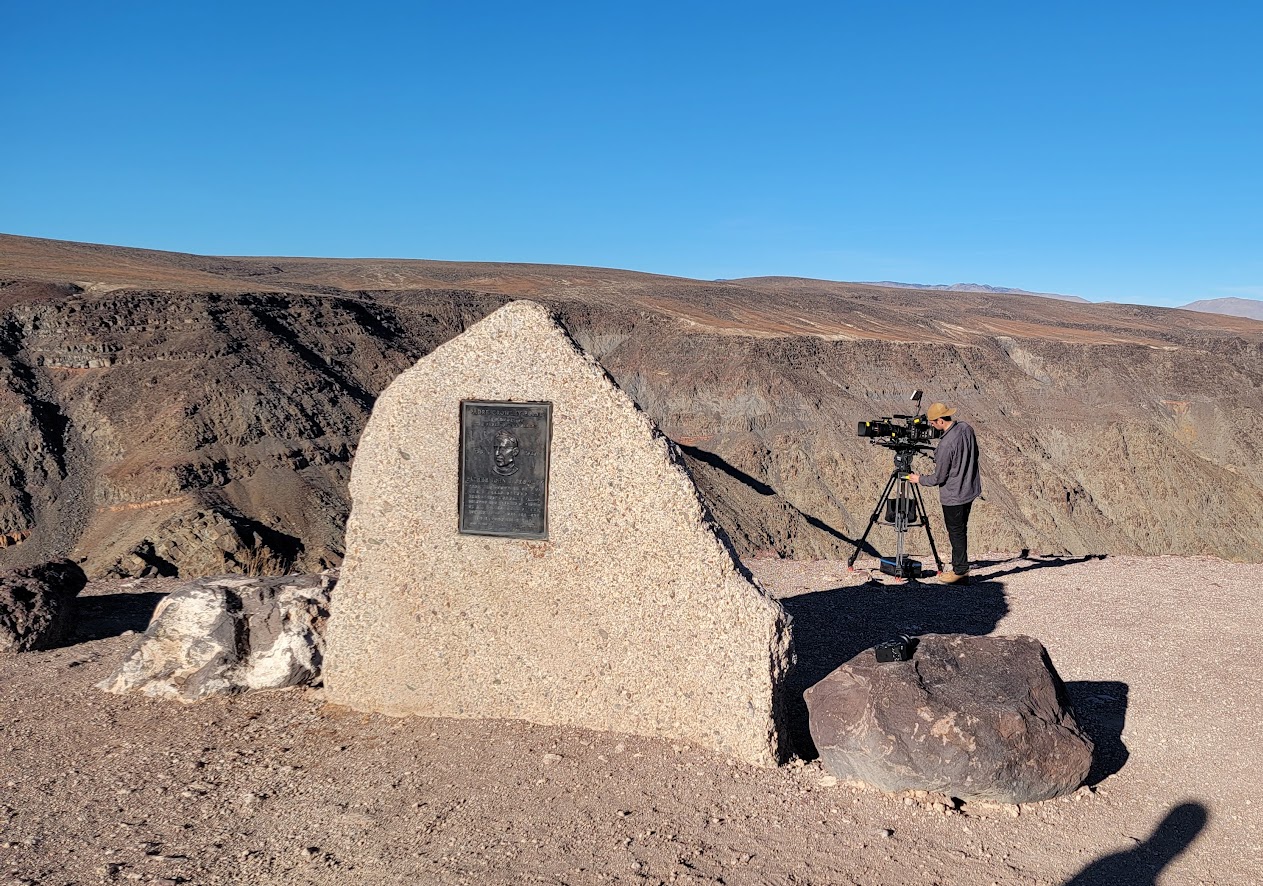 Near the stone monument was a man with what looked like professional video equipment. Walking closer to him, we could hear him communicating with someone via a radio, perhaps being told exactly when a jet was about to enter the canyon. Suddenly a jet came thundering into the canyon. Over and over again about every 20 minutes or so, another pass would be made. Wow! How cool! Several passes later there was another smaller plane, almost like it was chasing the the bigger one.

We stood there, well over an hour or more watching, our hearts in our mouths as the jets dipped below the canyon walls disappearing from our view. Wow! That sure looks scary!

Little did we know at the time that on this particular day, January 5th, (note it must have been a two day shoot because the video below is dated January 4th). they were filming a promotional video of a Dassault Falcon 8X long-range business jet to lure prospective buyers to purchase one at a mere cost of $60 million or more. It was accompanied by another jet rigged with cameras (later learned it was an L-39 ‘Cinejet’ cameraship).  Apparently despite military training being halted, commercial flights were still allowed in the canyon. How lucky we were to just happen to be there on one of those days! It must have been kept hush hush because there weren’t many people there.

Although we have a few very short videos, these professional ones will do a much better job showing exactly what we saw. The first one is really interesting because the actual pilots talk about how the plane performed and overall presents a unique perspective of the canyon from inside the cockpit.

This second video by airailimages is from the perspective of standing at the edge of the canyon watching the jets.

Since we couldn’t really see the jet descend into the canyon from the vantage point of the main parking lot, we drove the car down the dirt road in the hopes of seeing further into the canyon. Although it was a better viewpoint, Rob still couldn’t capture how close they were to the canyon floor.

Here’s a quick video from that vantage point.

Driving further along the dirt road past where we were parked leads to the actual point. 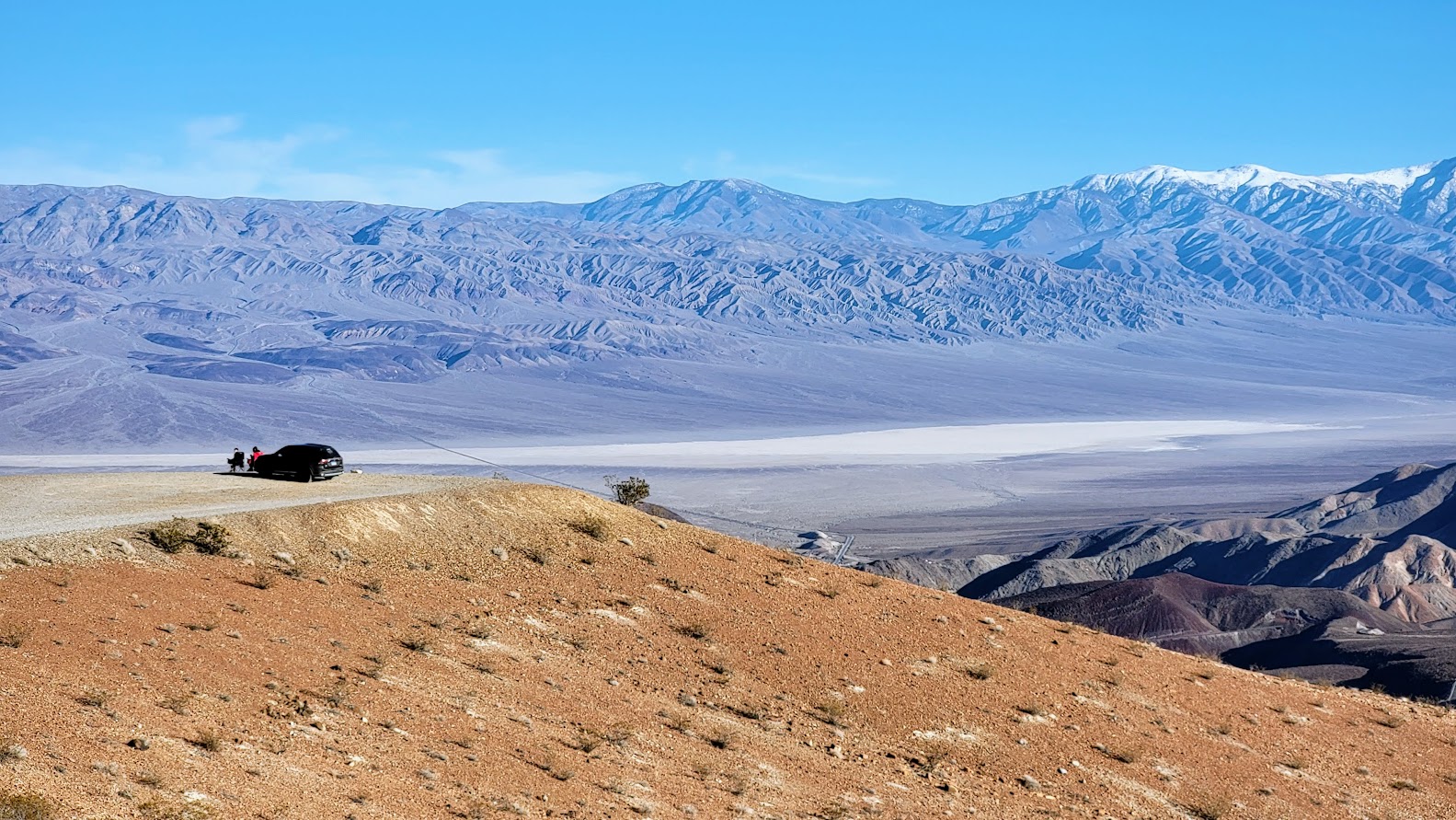 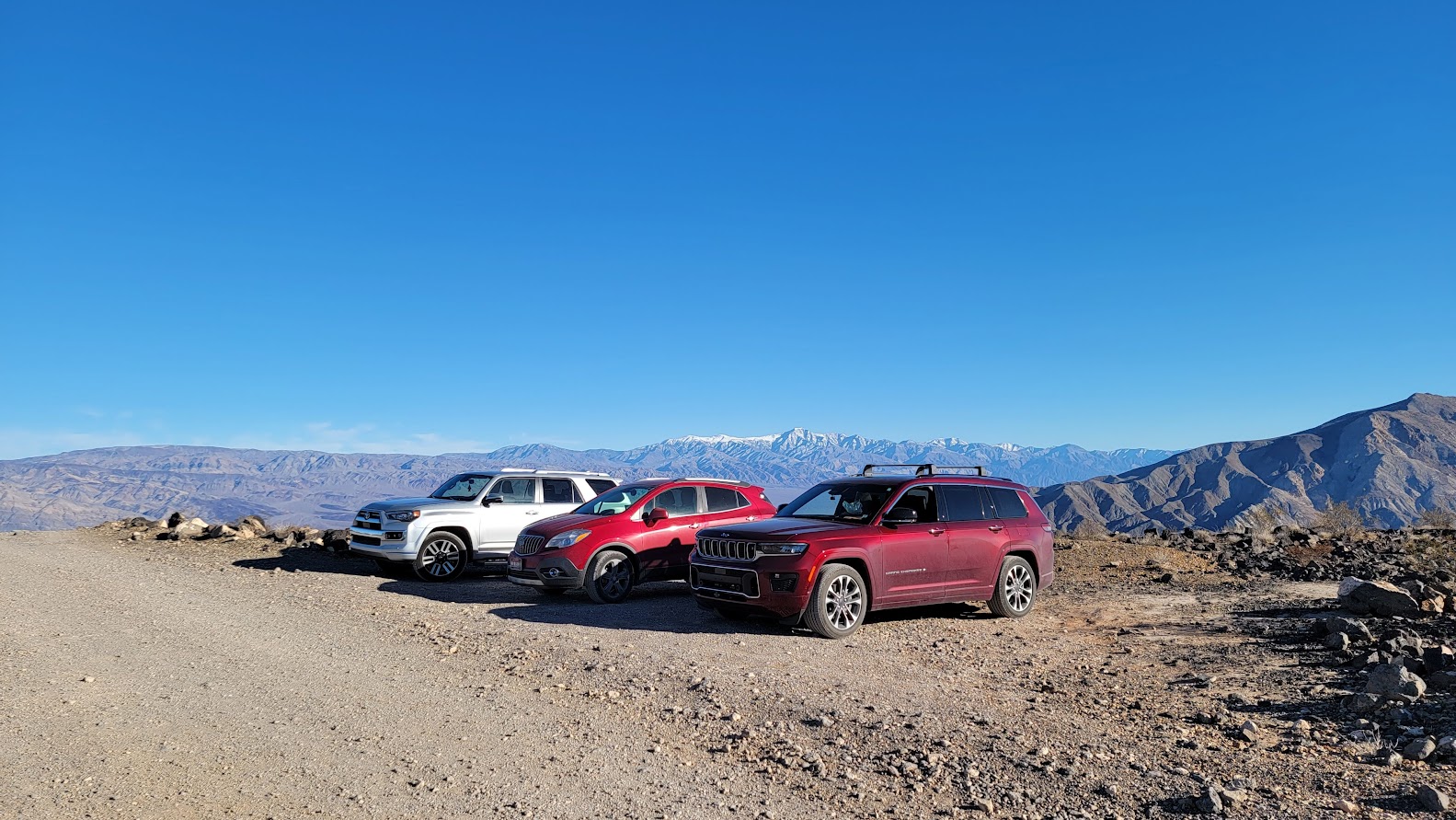 Probably could have stayed here all afternoon but reluctantly we had to leave so we could make it back to Furnace Creek before dark. 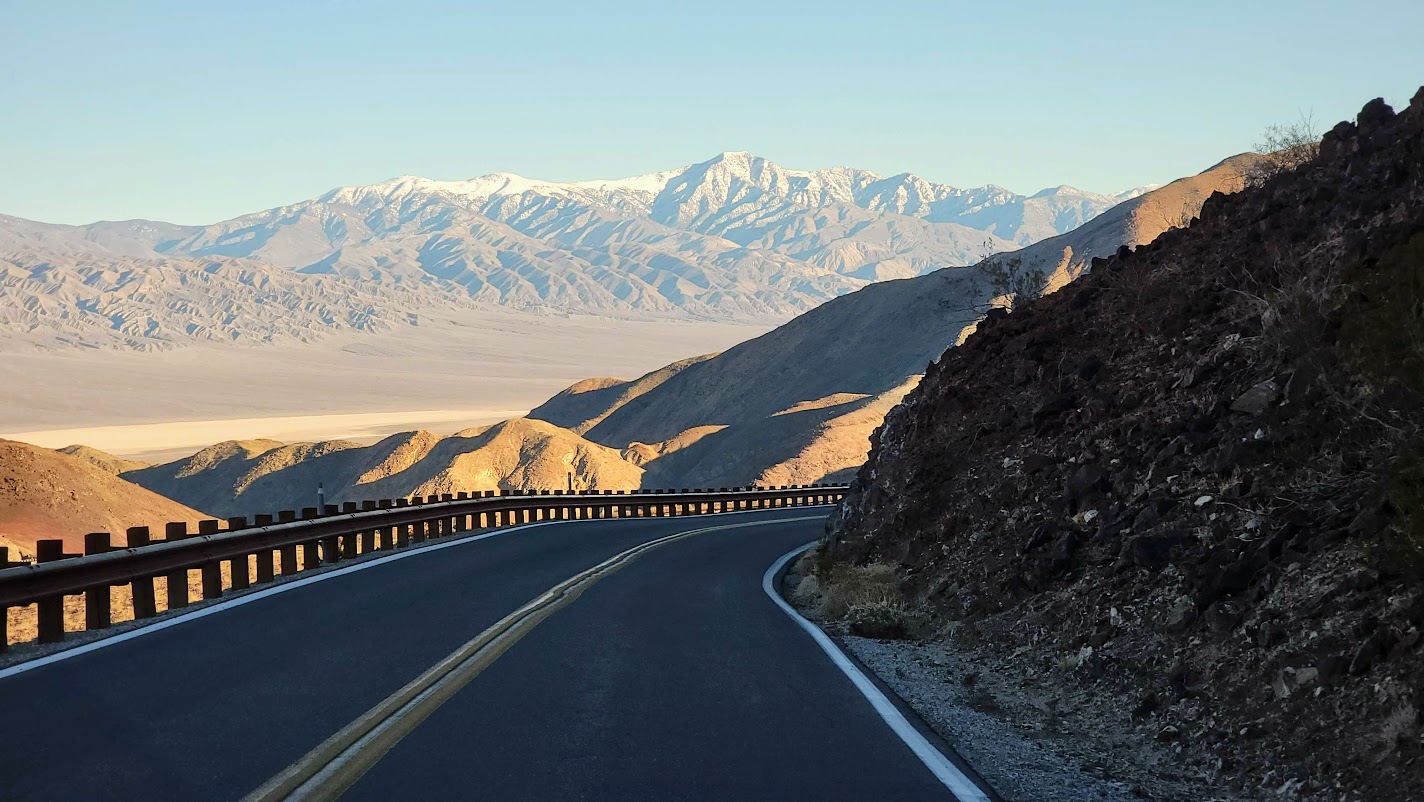 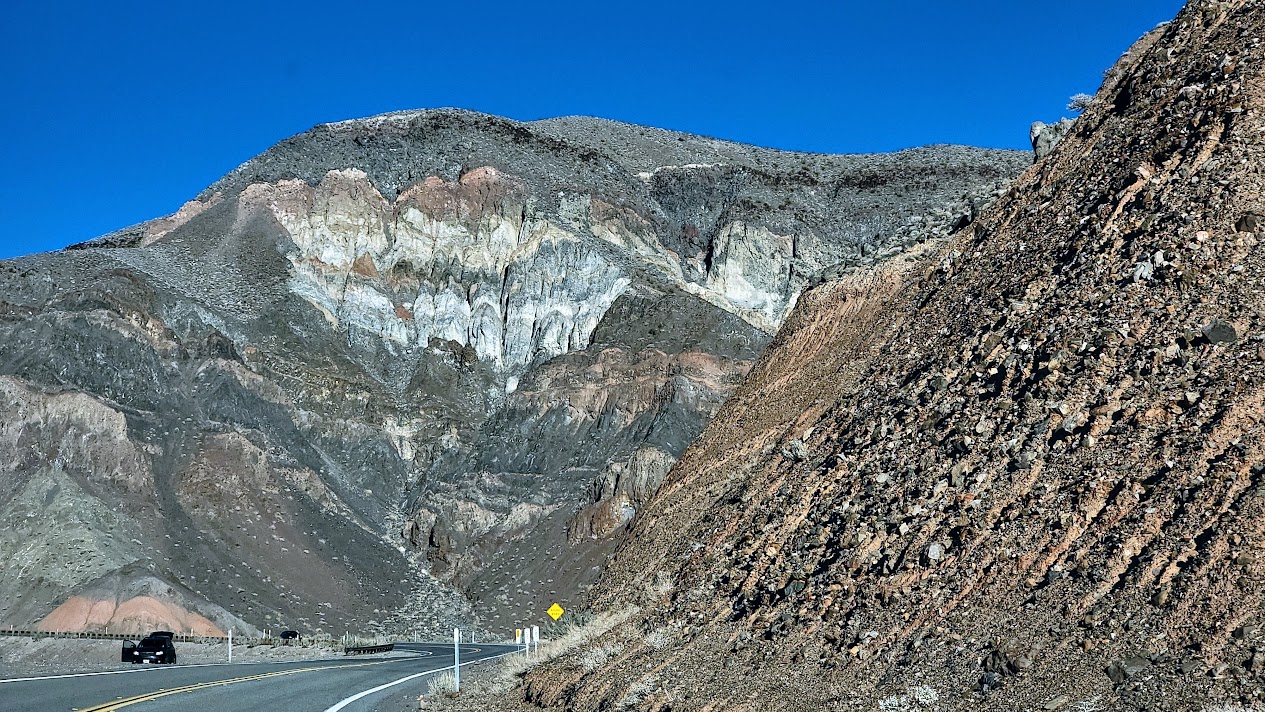 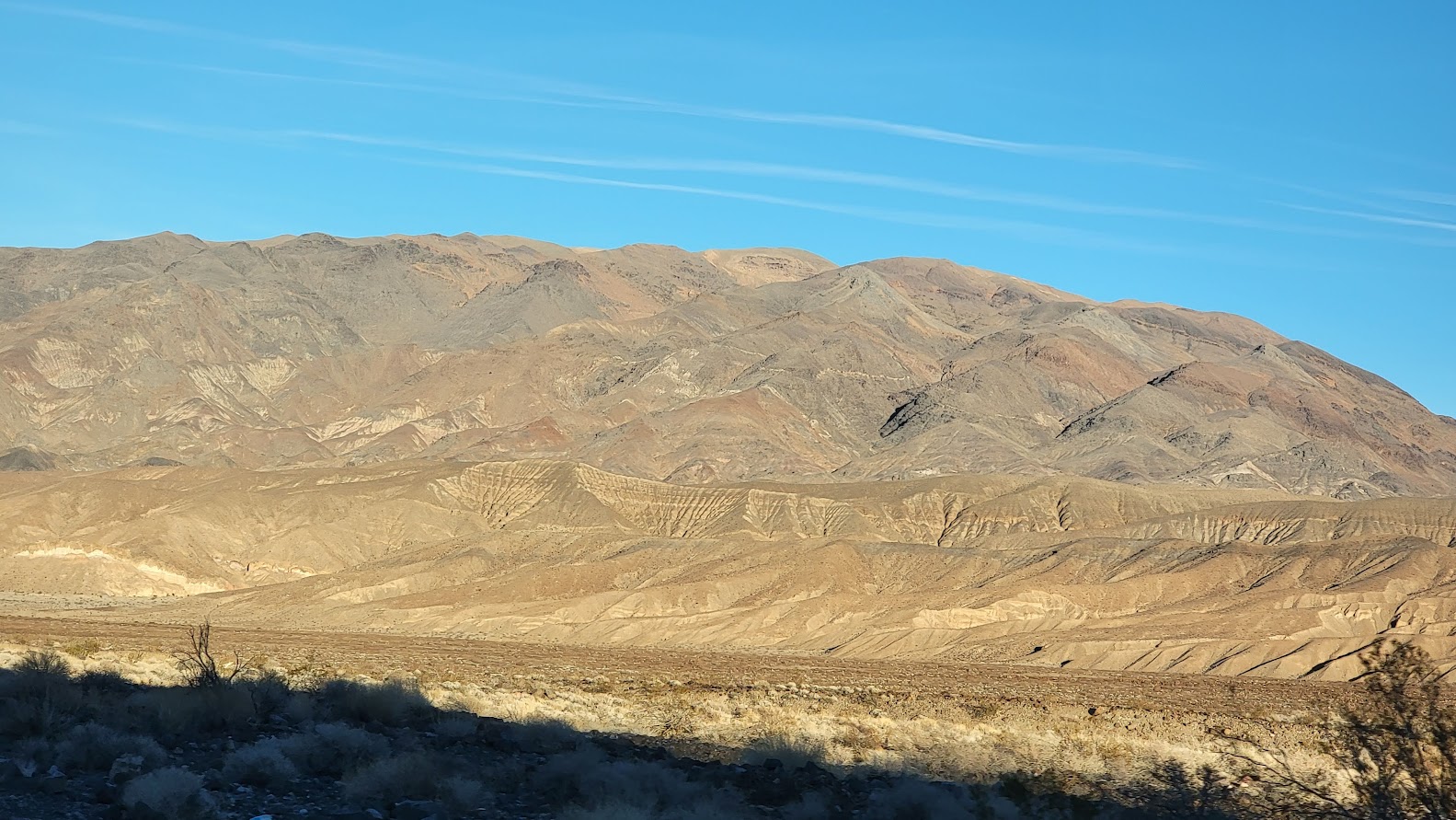 What an incredible, exciting day! What we thought was going to be just another ho-hum (NOT) day of spectacular scenery, turned out to be so much more!