Continuing our visit within the Lyndon B. Johnson National Historical Park, it was time to say goodbye to the gentle giant (and baby) Herefords in the Show Barn so we could continue our drive to our final destination here, the Texas White House complex. 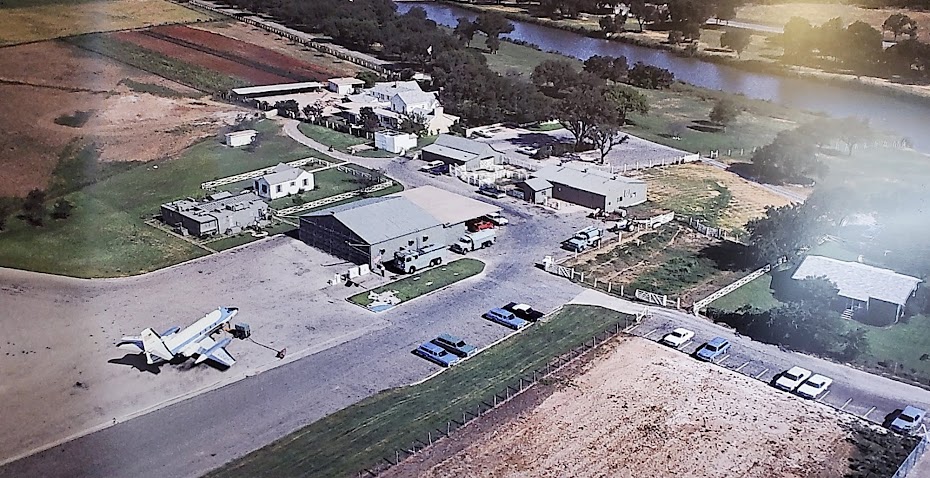 As soon as we pulled into the parking lot, together we both said “wow look at that!” as we spotted what we quickly learned was a Lockheed JetStar VC-140, fondly dubbed by LBJ “Air Force One-Half”. 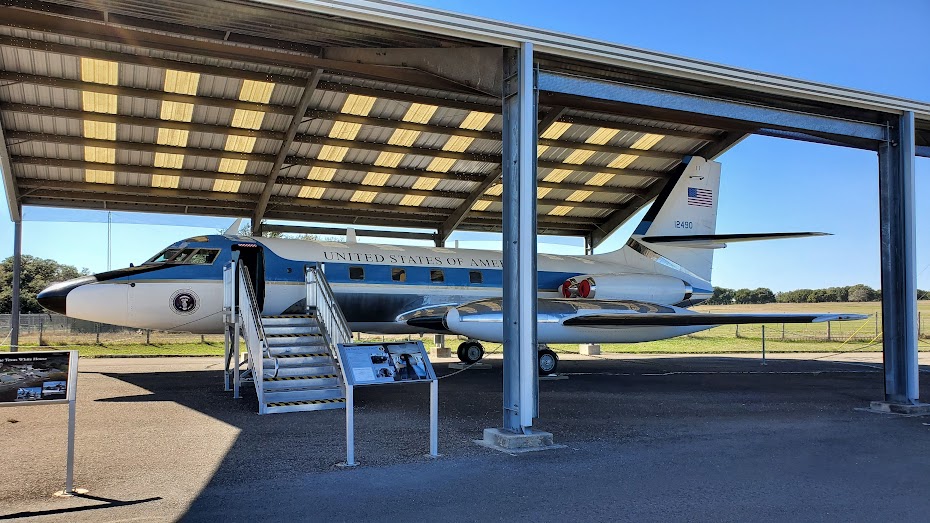 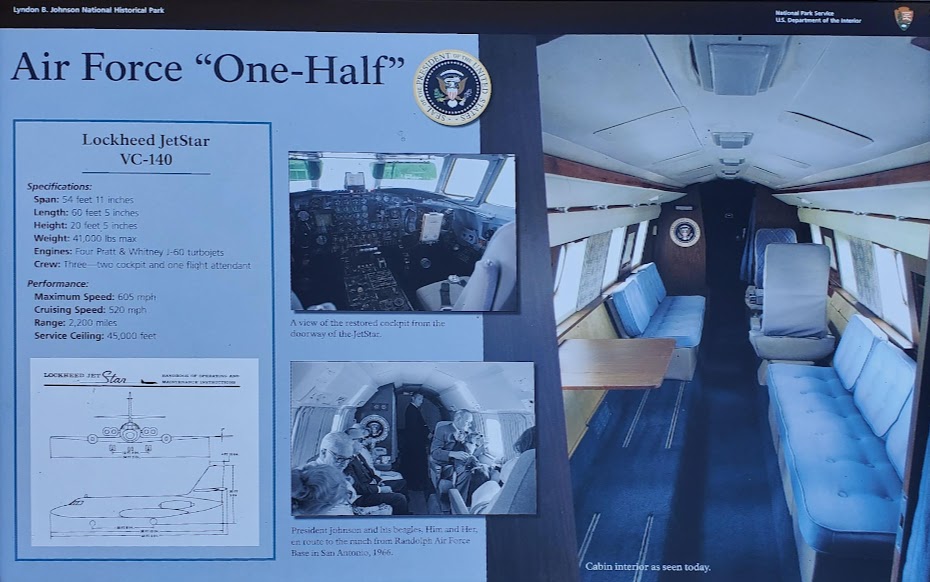 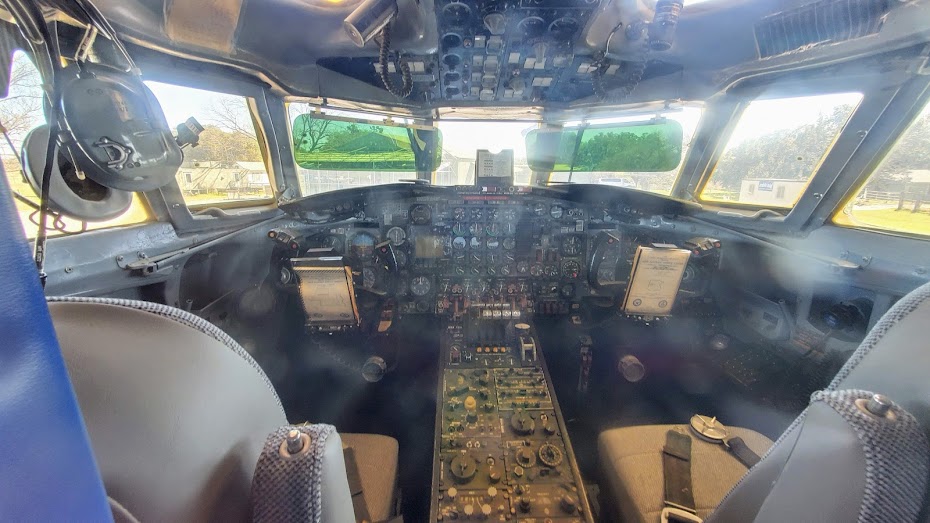 As early as 1951, LBJ set out to use the ranch as a home base where he could continue to work away from Washington, so he had a 3,000 ft. grass landing strip built. By the time he was President, improvements resulted in a 6,300 ft. asphalt air strip.  But even this improved air strip could not support the weight of the real Air Force One, a Boeing 707 Jet, so LBJ would fly to an air base in Austin or San Antonio, then board a helicopter or a JetStar destined for his ranch. 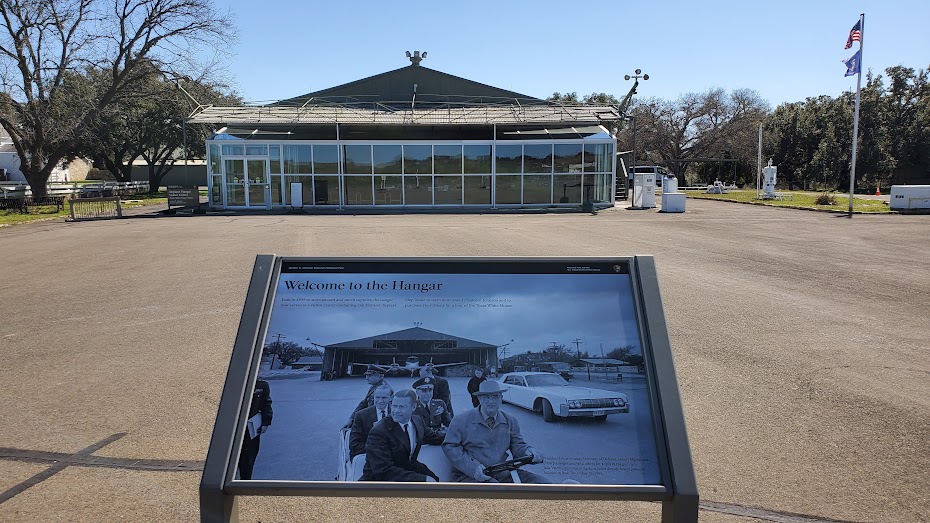 Built in 1959 what once was a hangar to store aircraft and ranch supplies was converted into a Visitor Center with numerous displays and exhibits depicting the times that LBJ and Lady Bird spent at their beloved Texas home.

Inside the Visitor Center, we learned that the interior of the Texas White House was closed indefinitely to tours due to health and safety concerns arising from structural issues, so tours of the inside of the house were no longer offered. However free ranger guided tours of the grounds between 11:00 a.m. and 4:00 p.m. were still available – luckily we were able to join one of those tours.

Since we had to wait about 1/2 hour for the tour to start, we wandered around looking at all the exhibits and watched a video. Here are some of the facts that we learned at the Visitor Center and on the tour.

About His Rise To Power
As mentioned in our previous post, Johnson was born on a farmhouse in Stonewall on August 28, 1908. In 1913, the family moved to nearby Johnson City. In 1930, he graduated from Southwest State Teachers College (now Texas State University) in San Marcos, Texas, where he taught at a school for disadvantaged Mexican-American students to pay for his education.

Seeing the effects of poverty and discrimination on his students made a deep impression on Johnson and sparked a lifelong desire to find solutions to these problems. In 1934, he married Claudia Alta “Lady Bird” Taylor who became a significant contributor to his political success.

His political career began in earnest in 1937 when he was elected to the House of Representatives as a Democrat. After that, he served as the Senate Minority Leader from 1953 to 1955. From 1955 to 1961, he was the Senate Majority Leader. Because of his domineering personality and his aggressive coercion of powerful politicians to advance his legislation, he earned a reputation of being the most effective Senate majority leader in history.

According to this article compiled from stories by the Secret Service titled Profile In Intimidation, “he famously bullied senators into falling in line on votes by using a mixture of intimidation, threats, and promises of rewards.” Hmmm, does that sound familiar? And then there’s this National Post article titled “The most vulgar President? It sure as #$@%!* isn’t Donald Trump“. That certainly wasn’t mentioned on the tour!

He served as Vice President under John F. Kennedy from January 20, 1961 till the assassination of Kennedy on November 22, 1963 when he was sworn in as President. In 1964, he defeated Barry Goldwater. He didn’t seek reelection, leaving office in 1969 to retire to his ranch. 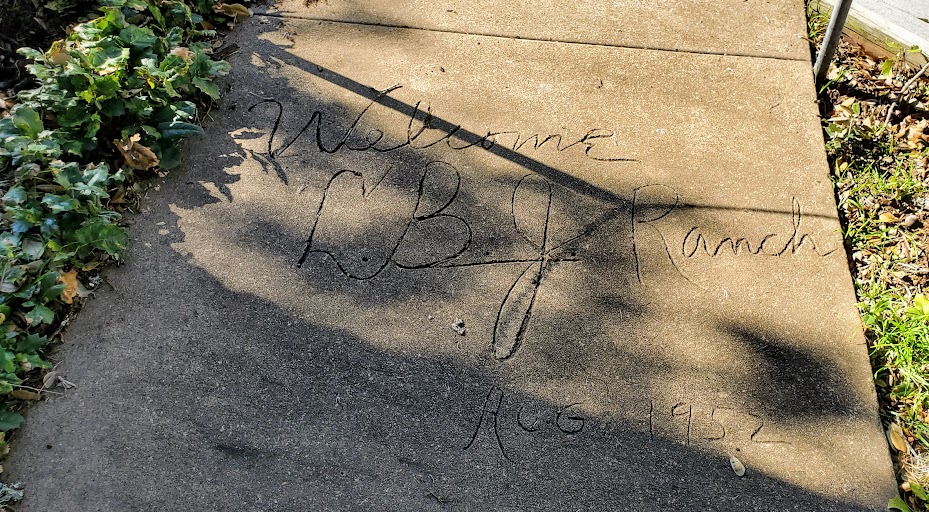 The original section of the house was built out of native limestone in 1894. When LBJ’s aunt and uncle, Frank and Clarence Martin, bought the house in 1909, they added the main central portion of the house. In 1951, when the Johnson’s bought it, the house was in need of major repairs so LBJ and his family weren’t able to move into the house until 1952. More additions were added after Senator Johnson was recuperating from his first near fatal heart attack in 1955. The house became very crowded as more and more business was being conducted there, much to Lady Bird’s chagrin.  At her request, a new office, living room and bedrooms were added. The original two story frame house eventually grew to 28 rooms. 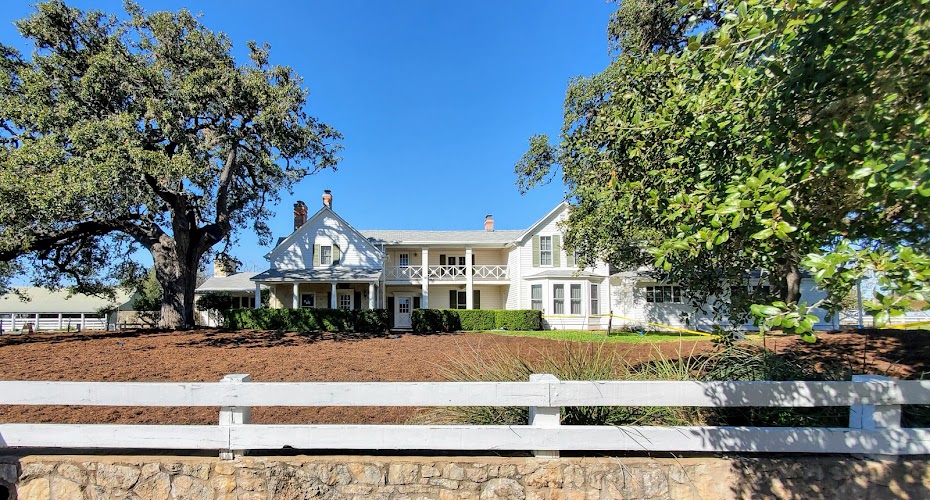 Communications
The LBJ Ranch in 1951 only had one phone line. By the time LBJ became VP in 1960, communications had expanded to 15 local and long distance phone lines as well as the addition of a 50 foot antenna to provide reception to three TV’s, one for each network.

After he became president in 1963, there was enough equipment for a small city, to ensure the president was able to run the country from the ranch. This equipment included microwave towers providing 120 channels to Austin, two way radios, teleprinters, cryptographic machines and more than 100 phones. In fact, there was a phone in every room – he even had a telephone on a 70 foot phone cord that would extend from the Texas White House out to the swimming pool! It all sounds pretty antiquated these days but back in the 60’s, it was pretty advanced. 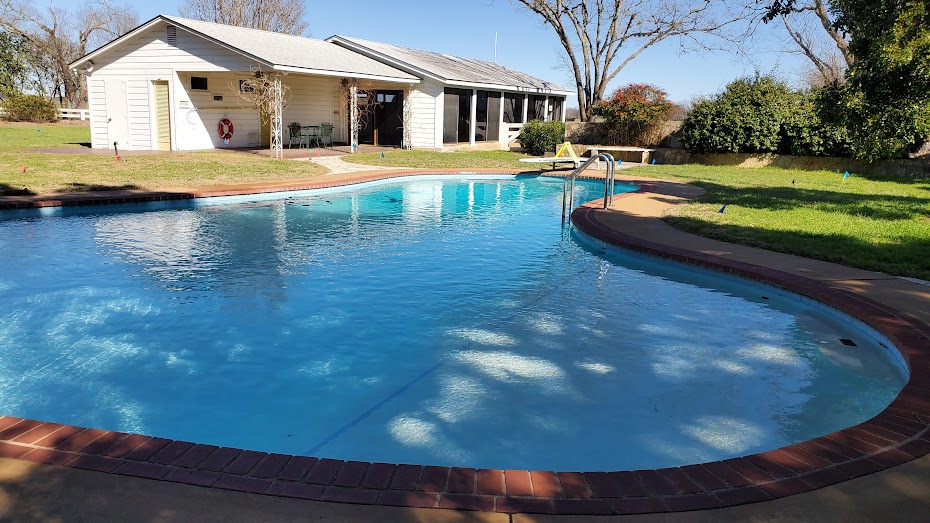 Secret Service
Prior to the Kennedy assassination, security for Johnson was an ad hoc affair as the Vice President preferred his privacy. But that quickly changed after Kennedy was killed. The increased influx of agents required expanded facilities. The small building below was converted from a ranch house, becoming the Secret Service Command Post and a trailer was added to serve as the Command Center.

Because the President was a compulsive mover, “someone who would put on his hat and move in 5 minutes”, it was challenging for the Secret Service to protect him and his family. But somehow they did and continued providing protection to the family until the death of Lady Bird in 2007. 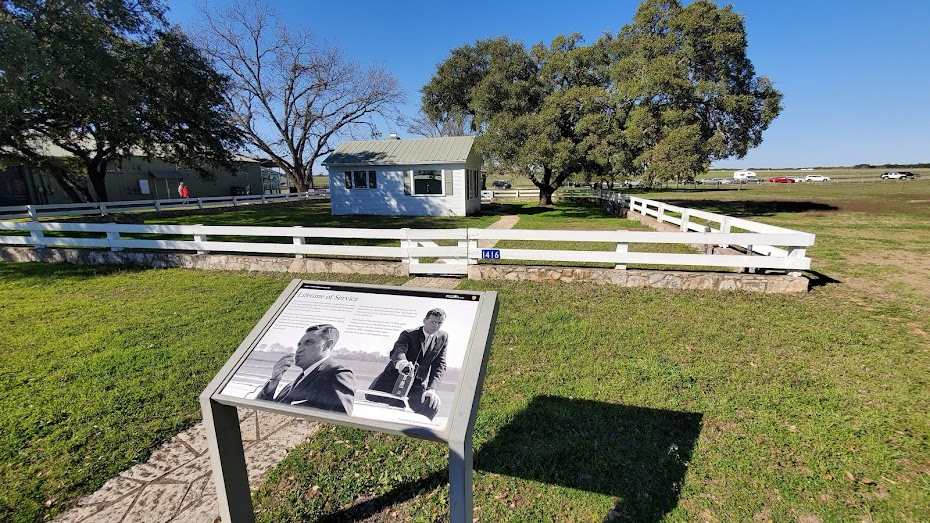 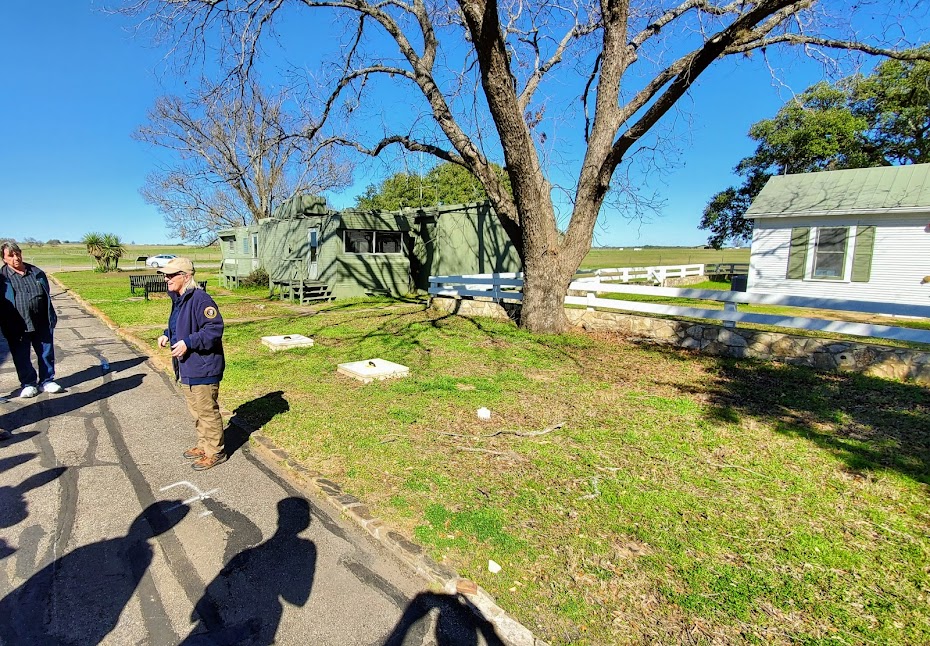 Friendship Stones
Instead of a traditional guest register, LBJ would have dignitaries and guests etch their autographs and the date of their visit into 12 inch blocks of wet cement. These stones were then incorporated into the landscape as pavers for walkways and sidewalks. 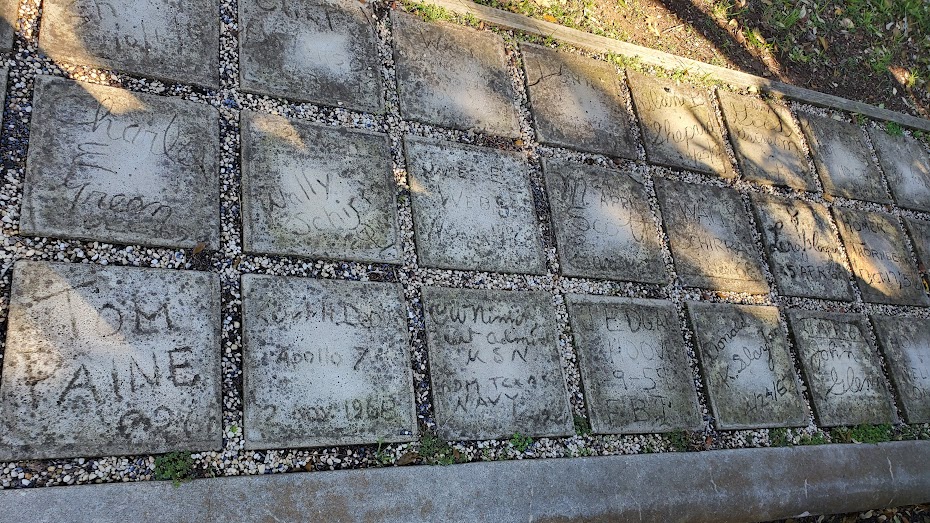 Some of the originals are on display in the Visitor Center. 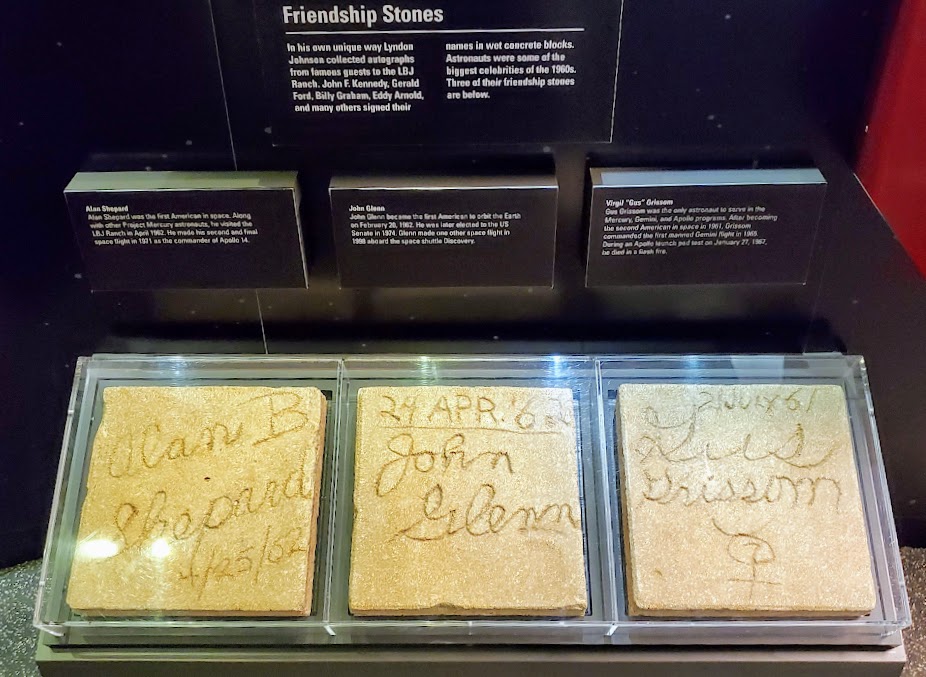 His Toys & Barbeques
Johnson loved his cars, his toys and his barbeques! He would take his guests on a tour around the ranch in his white with tan leather interior Lincoln Convertible. 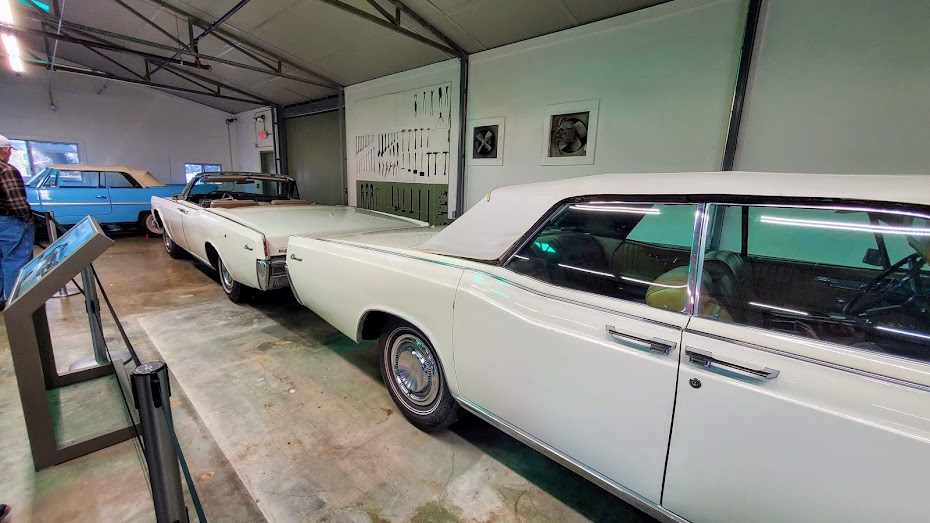 Or take them deer hunting in his 1934 Ford Phaeton which had a rifle rack and full wet bar (mmm, rifles and a wet bar – poor deer didn’t stand a chance). 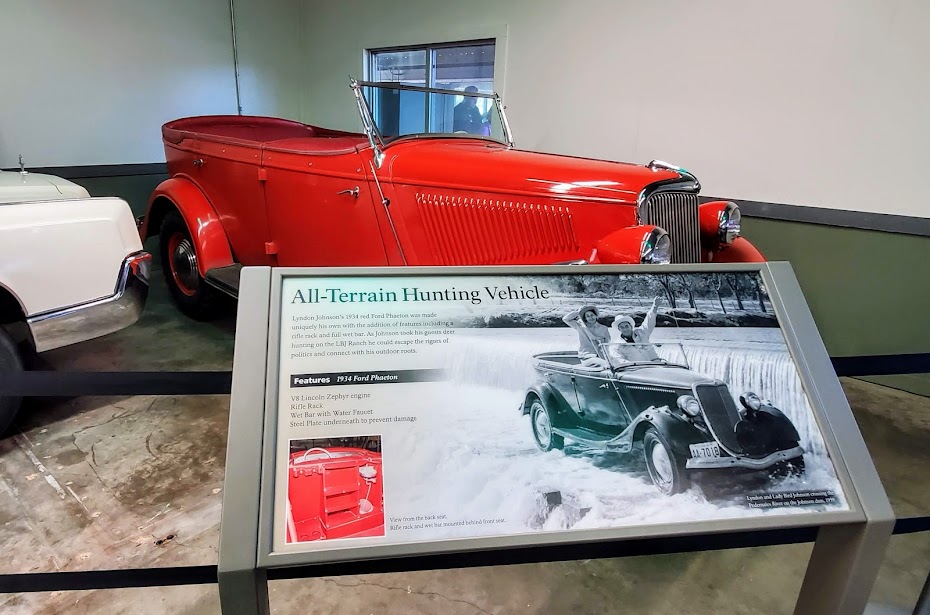 Or if that wasn’t enough, his unsuspecting guests might get driven into Lake LBJ in his amphibious car, a German built, 1962 Amphicar! 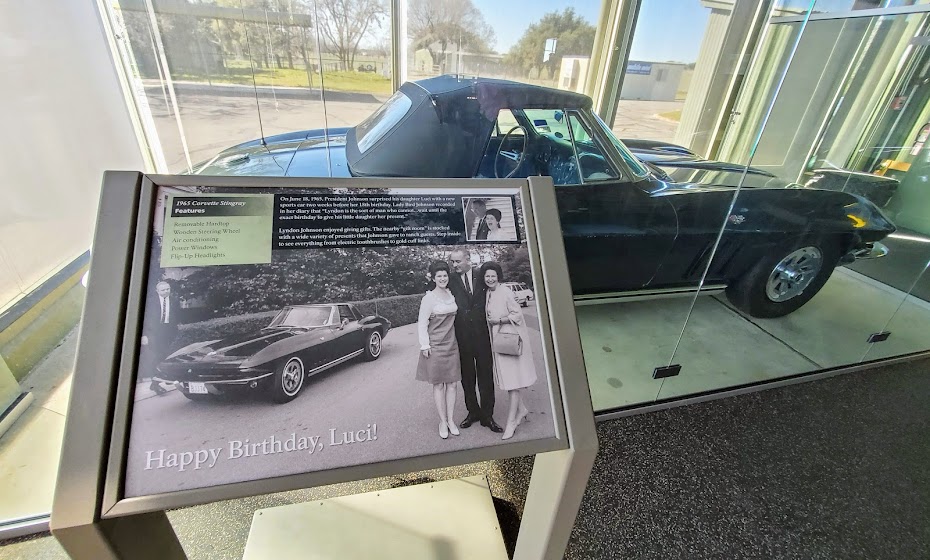 The Johnsons hosted about 100 barbeques beneath the live oaks on the Pedernales River during his presidency, feeding and entertaining foreign dignitaries, Cabinet members, friends and even the White House Press after his victorious election in 1964. Johnson recognized the power of the press! 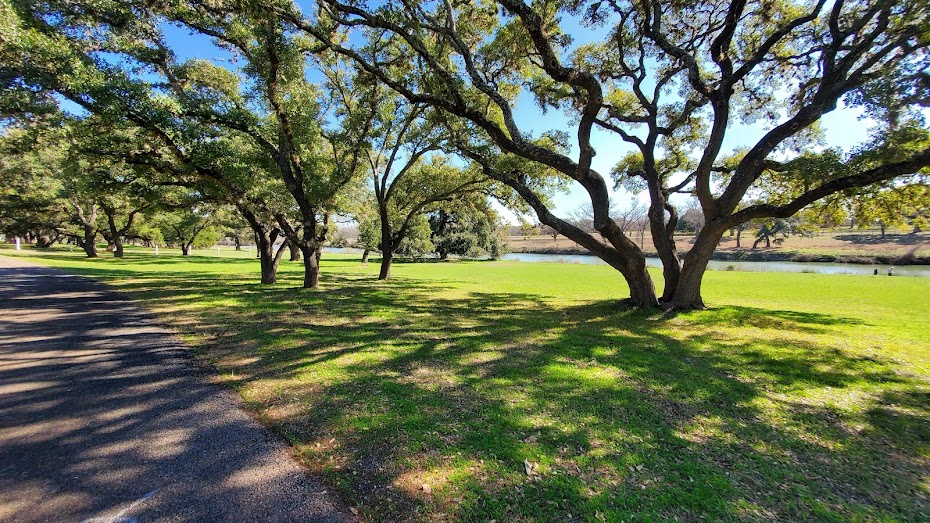 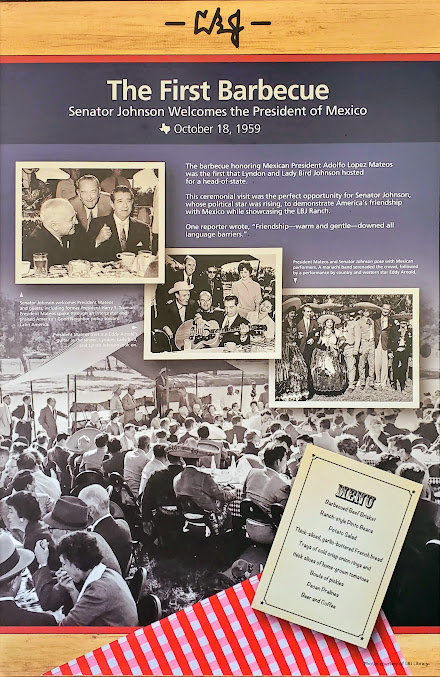 In 1972, after retiring, the former president and first lady donated nearly 600 acres of their ranch to the National Park Service. Approximately 2000 acres of the remaining land at the ranch still belongs to the Johnson family.

LBJ’s Accomplishments
As soon as he became President, he declared a “War On Poverty”, building a “Great Society” for all Americans. He accomplished this by pushing his Democratic Congress to pass legislation attacking illiteracy, unemployment and racial discrimination. It seems that the Johnson Administration was successful – 87 bills were submitted to Congress, and Johnson signed 84, or 96%, arguably the most successful legislative agenda in US congressional history. Lot different than what we are seeing today!

Here are just a few of the significant accomplishments during his Presidency. 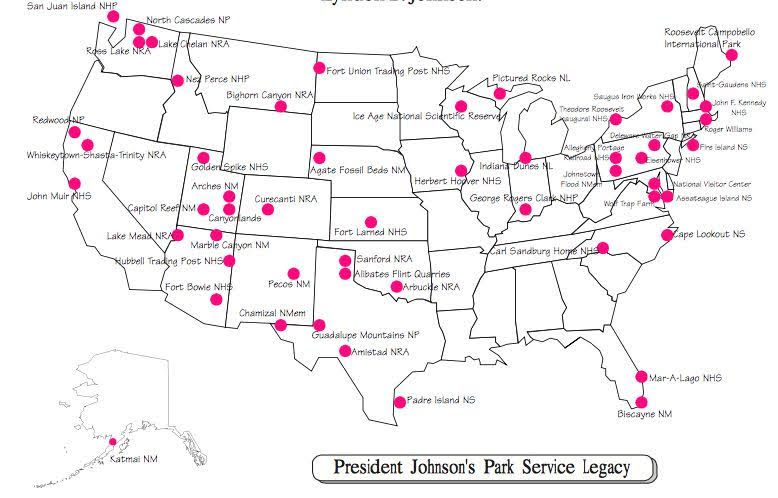 However, despite his considerable achievements in the domestic arena, Johnson’s presidency and his legacy were undeniably marred by the Vietnam War.

As mentioned in our previous post, Lady Bird was a key advisor to LBJ, influencing many of the decisions he made.

But she is best known for her achievements as an environmentalist as seen in this video, a businesswoman, a political activist, and obviously the First Lady. Here are some of her individual achievements: 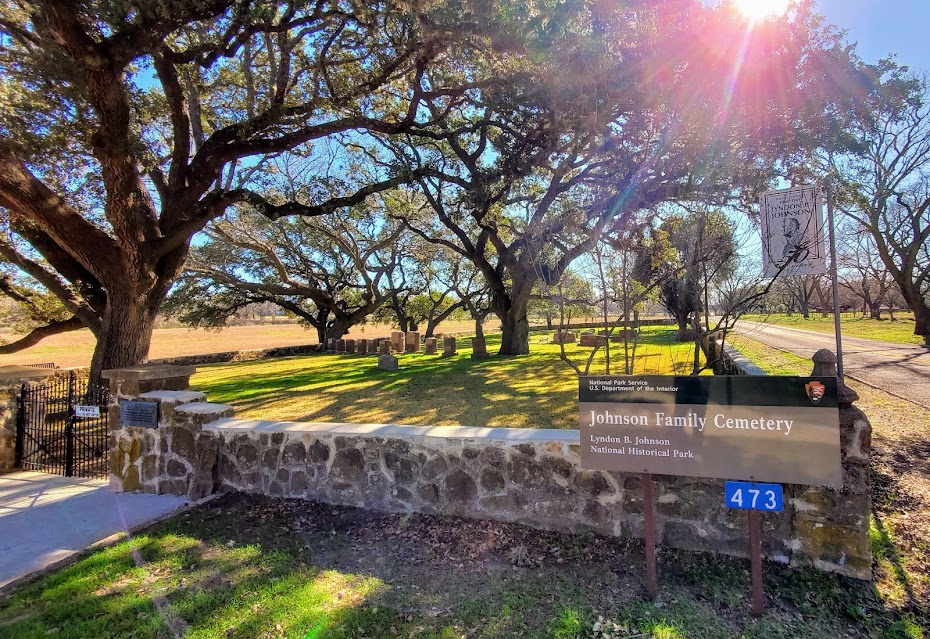 It was a somber moment at our last stop – the Johnson Family Cemetery where so many members of the Johnson family are buried.

Heart problems plagued LBJ’s family and unfortunately he was not spared. In 1955, he suffered a near fatal heart attack when he was Senate Majority Leader at the age of 47 after which he quit his 60-cigarette-a-day smoking habit. After he retired from the Presidency, he started smoking again. He suffered another heart attack in 1972. In one interview at the age of 64, he said “Johnson men die before reaching 65 years old.” He died a short time later on January 22, 1973 from a massive heart attack, less than one week before the Vietnam peace agreement was signed.

Lyndon Baines Johnson was laid to rest in the family cemetery in 1973, five years after retiring from the Presidency in 1968. The marker in the photo below quotes the words of Billy Graham who delivered the eulogy:

“Here amidst these familiar hills and under these expansive skies and under these beautiful oak trees he loved so much, his earthly life has come a full circle….his roots were deep, right here on this spot in the Hill country. “

Lady Bird was also laid to rest next to her husband in 2007 when she died at the age of 94. At the end of our very busy day, we certainly knew a lot more about our 36th President and enjoyed our visit and the education that it provided. But stay tuned, we weren’t done with the Johnson legacy yet!