Suffering from LBJ information overload (as I’m sure you are too), we opted for a day or two of rest before driving to Johnson City, about 32 miles from The Vineyards at Fredericksburg RV Resort. Visiting this district of the Lyndon B. Johnson National Historical Park would give us further insight into his boyhood from the age of five until his high school graduation in 1924. 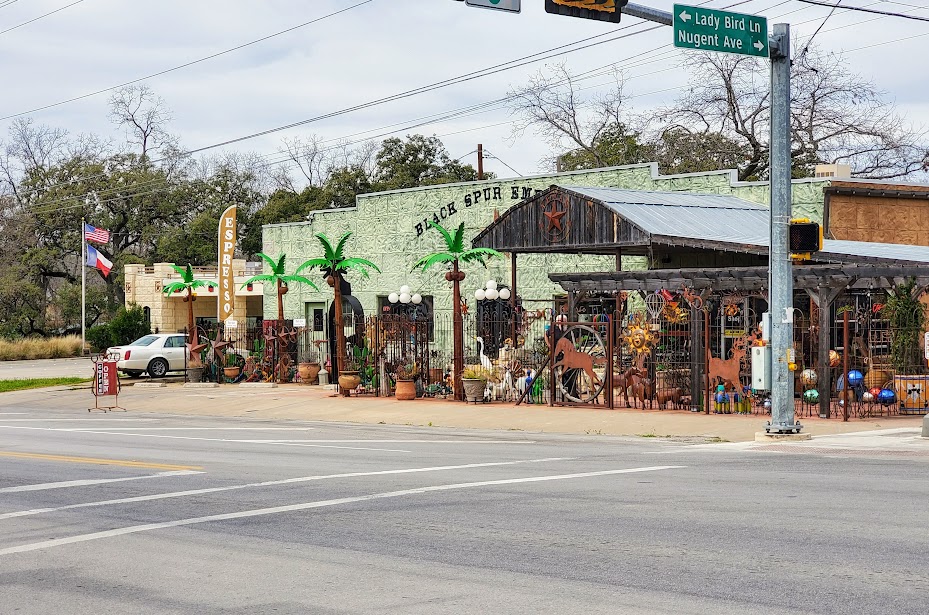 Located on the corner of Main Street (U.S. Highway 290) and Nugent Avenue in Johnson City was the “Withers & Spauldings,” building which was our first stop. Built in 1893, this general store served as a dry goods store, general merchandise emporium, cotton, wool and mohair warehouse and youth recreation center. One interesting fact is that Johnson City was not named after the 36th president but for another family member, James Polk Johnson, who was related to LBJ’s grandfather. 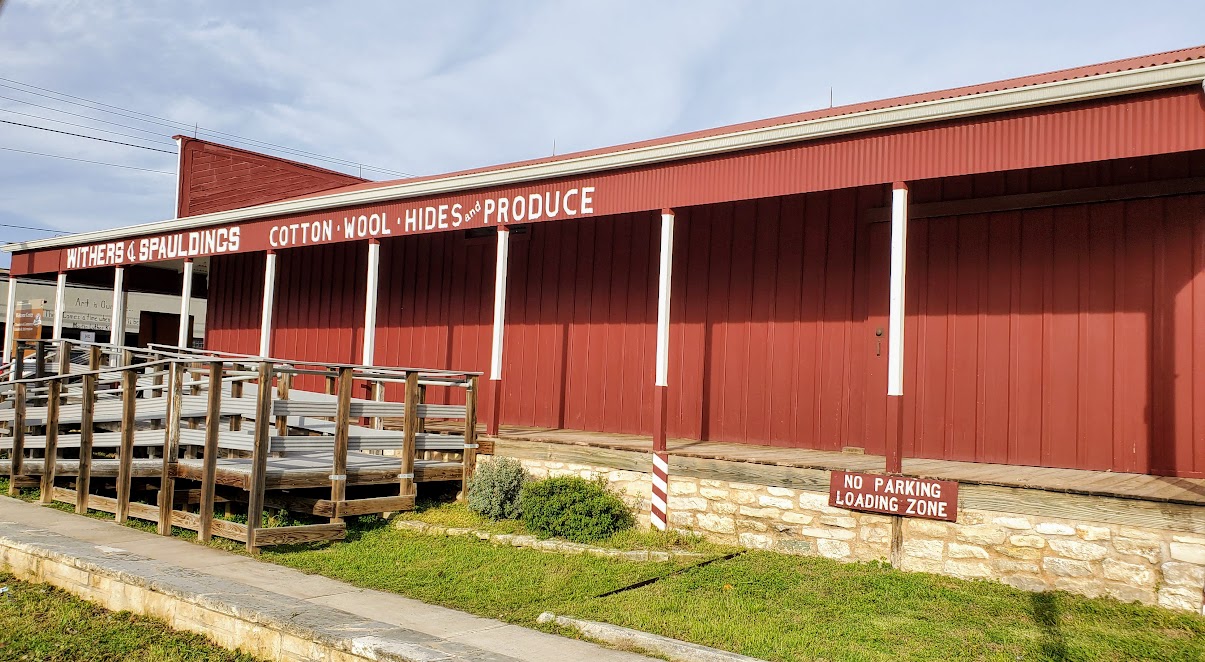 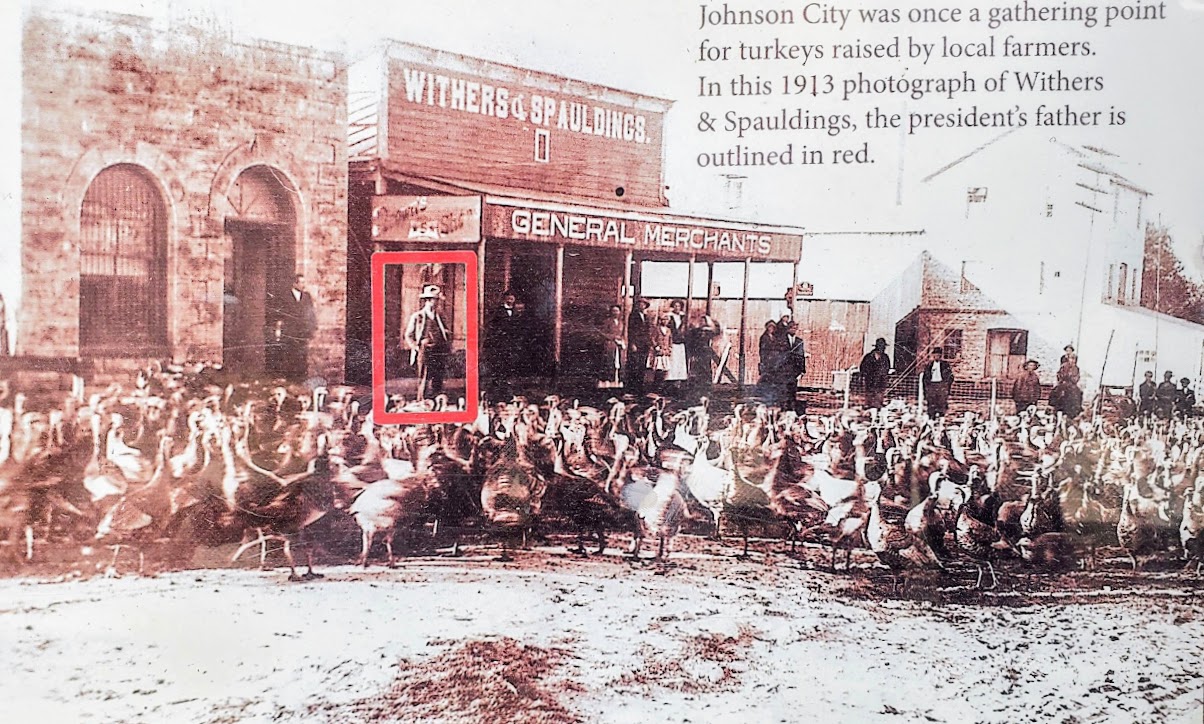 In 2008, this newly renovated building was opened to the public who can immerse themselves in exhibits spanning several time periods from 1915 to 1973. Johnson would visit the general store as a child during the 1915 to 1920 timeframe and then later he would return while campaigning and visit with people he had known all his life. Housed in the same building adjacent to the Johnson exhibit is the Chamber of Commerce Visitor Center which provides information about other attractions in the town as well as maps for the area. 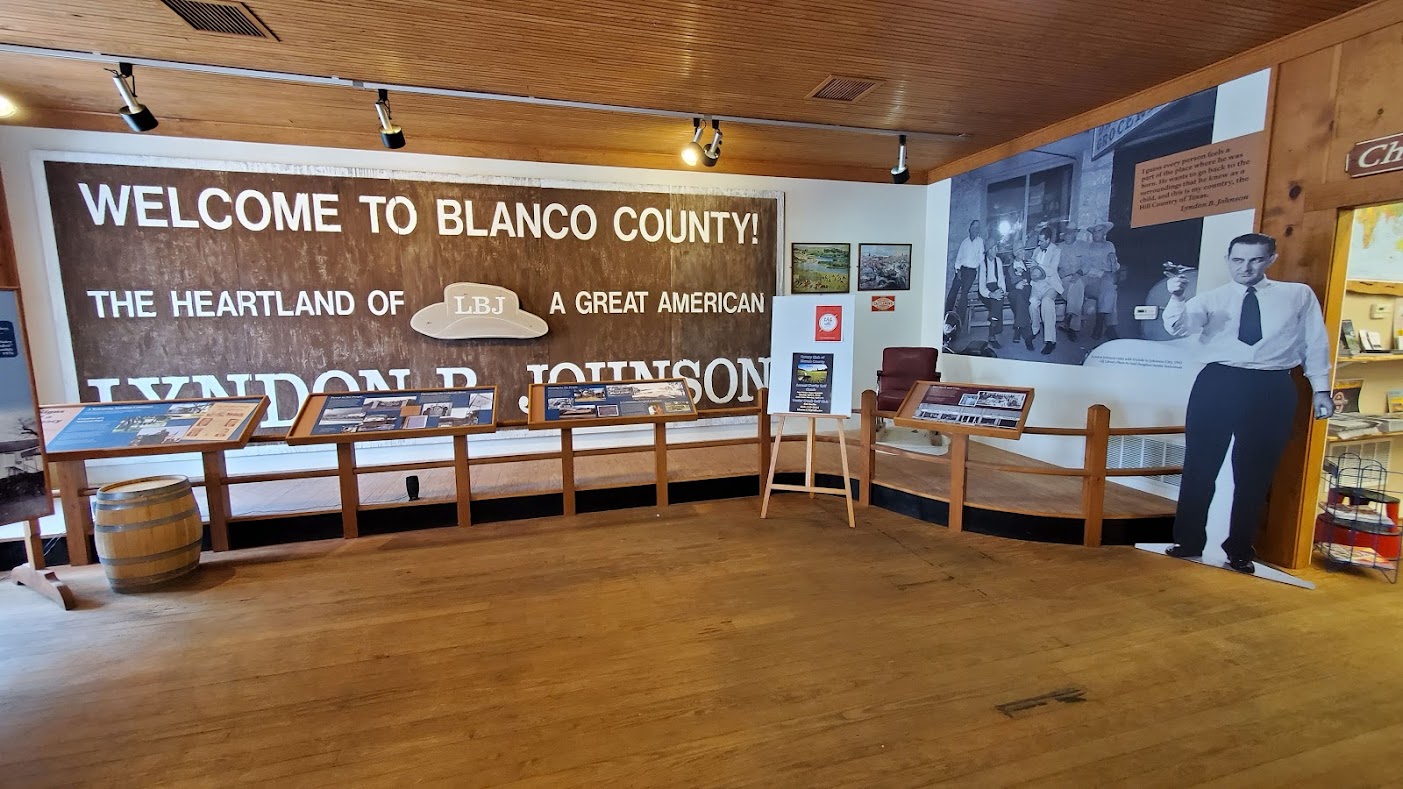 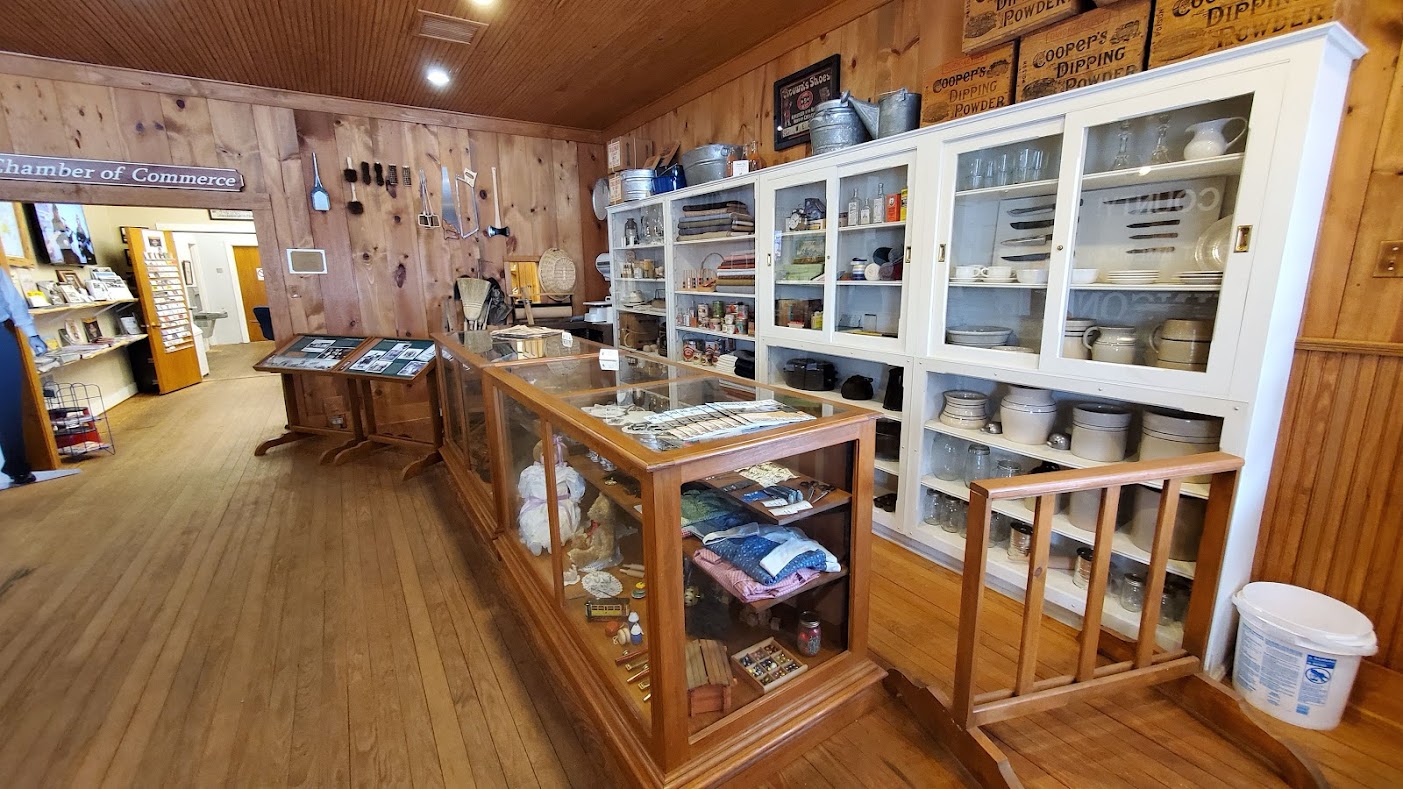 Exhibits not only showcase LBJ’s life and accomplishments including a world events timeline and a display depicting the highlights of LBJ’s Great Society programs but also pay tribute to Lady Bird and her contribution to the Conservation Presidency. Two 30 minute video presentations were offered, one about the Johnson Administration and the other about Mrs. Johnson’s life and achievements. We were able to join one of their free tours of his boyhood home which are given hourly from 10:00 a.m. to 4:00 p.m. 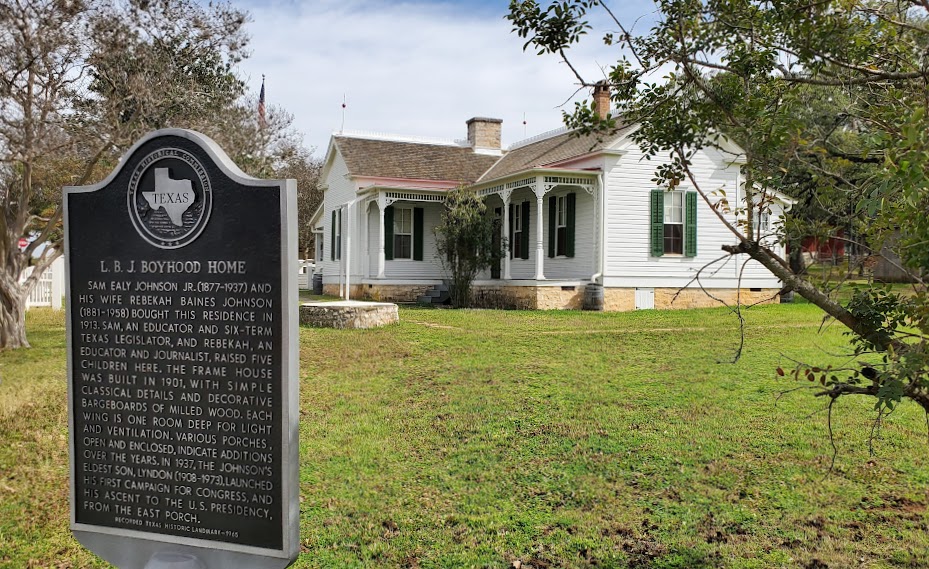 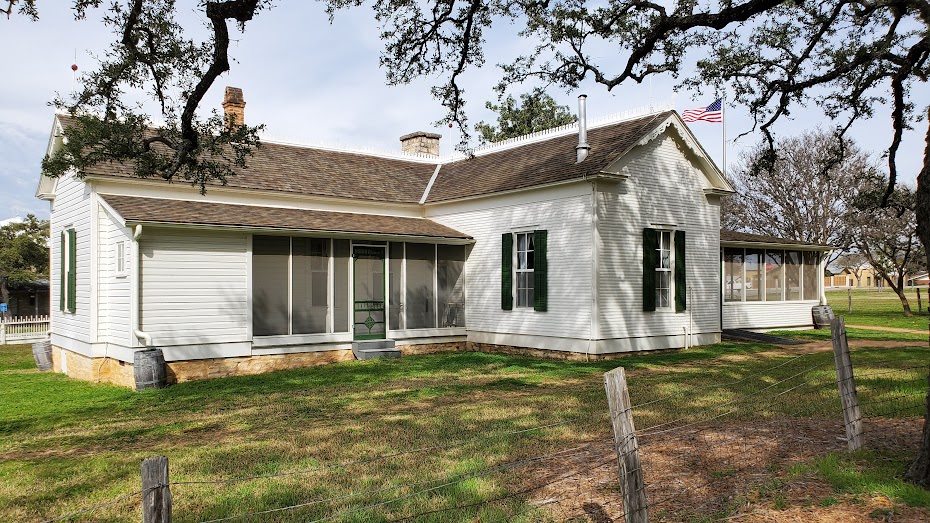 We learned that the Folk Victorian house was built in 1901 by W.C. Russell, sheriff of Blanco County. In 1913, Sam Ealy Johnson, Jr. paid $2,925 (a small fortune in those days) for the house and the surrounding 1.75 acres. Although it was considered one of the finest houses in Johnson City at the time, it was a modest home with only three rooms and no electricity.

Lyndon Johnson’ family moved from Stonewall to Johnson City shortly after his fifth birthday in September, 1913. The family included Lyndon’s father, Sam Ealy Johnson, Jr.; his mother, Rebekah Baines Johnson; young Lyndon; and his sisters, Rebekah and Josefa. Over the years, two more children were born in this house – Lucia and Sam Houston Johnson. Lot of people for such a small home! 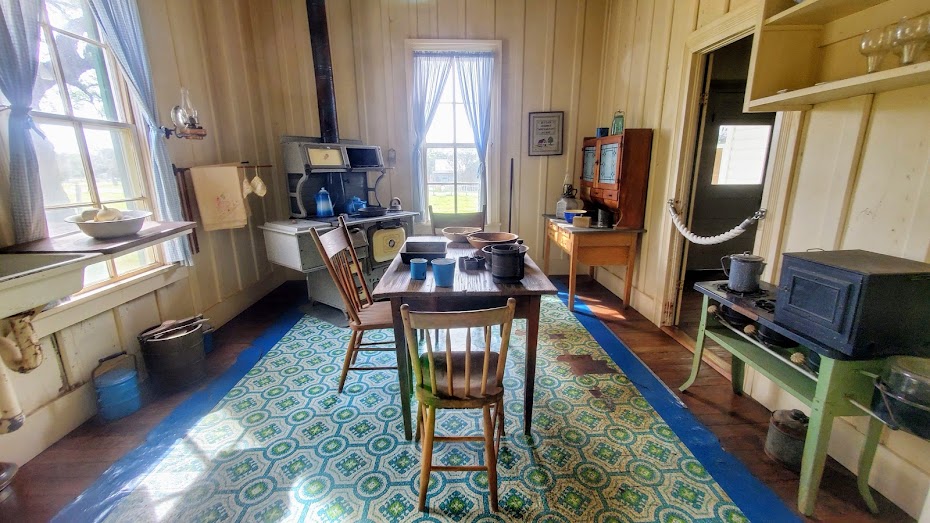 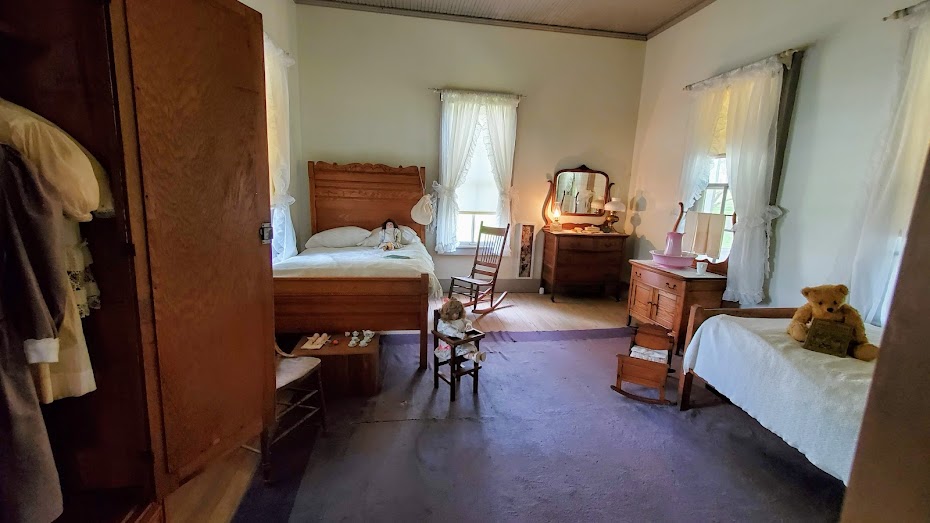 Lyndon’s parents were a major influence on him and would have a profound effect on his future political career. His father, Sam Ealy Johnson, Jr., a democratic state legislator for twelve years, would hold meetings with his constituents on his front porch. According to our tour guide, young LBJ would sneak out of his room and crawl through the foundation to eavesdrop. Because of his father, he was indoctrinated into politics at a very young age. At ten, young Lyndon was on the campaign trail working for his father’s re-election and at thirteen, he sat by his father’s side during legislative sessions. These experiences taught Lyndon Johnson the “political facts of life” and the necessary skills of a successful politician. 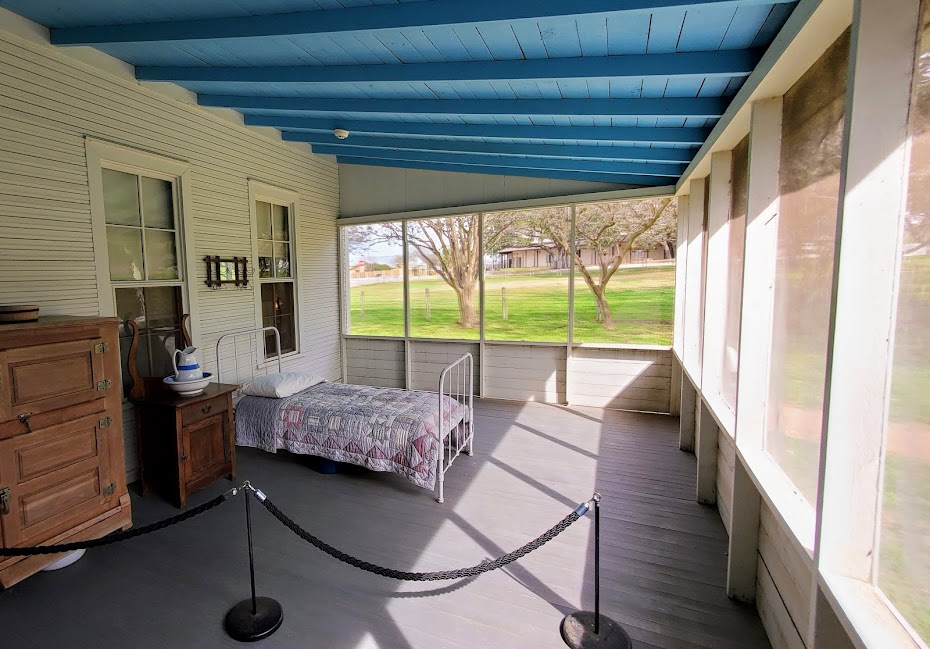 His mother, Rebekah Baines, one of the few college-educated women in the area, was passionate about education. It was in this home that she taught elocution lessons, debating techniques and civic participation to not only her children but the neighborhood children as well. Young Lyndon used those skills as he got older, teaching debate strategies for a school team. Interesting to note that all five of her children would go to college. Pretty amazing back in that era.

Hanging on one of the walls in the home is what looks to be a portrait of a skull. However, our tour guide told us to look at it more closely – it was the image of a woman looking into a vanity mirror. The lesson his mother taught the Johnson children was to always be careful when judging people – the surface image may not always reflect the true motives of a person. 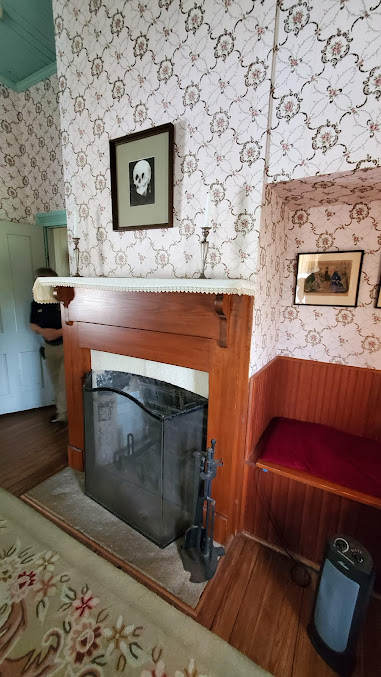 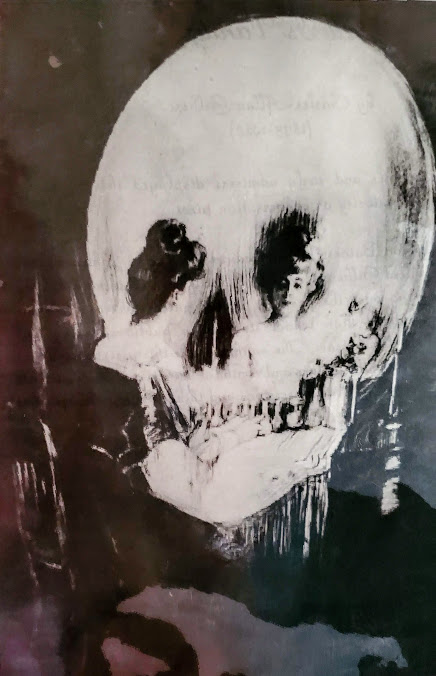 During the first week of March, 1937, LBJ began his political career when he stood on the porch of his boyhood home to announce his candidacy for the U.S. House of Representatives for the Tenth District of the State of Texas. Over his more than three decade public service career which culminated in the presidency of the United States, he ushered in landmark legislation such as Medicare, Head Start, the Civil Rights Act of 1964, and forty-three national park authorizations or additions. Sixty education bills were passed by his administration, a fitting tribute to his mother. 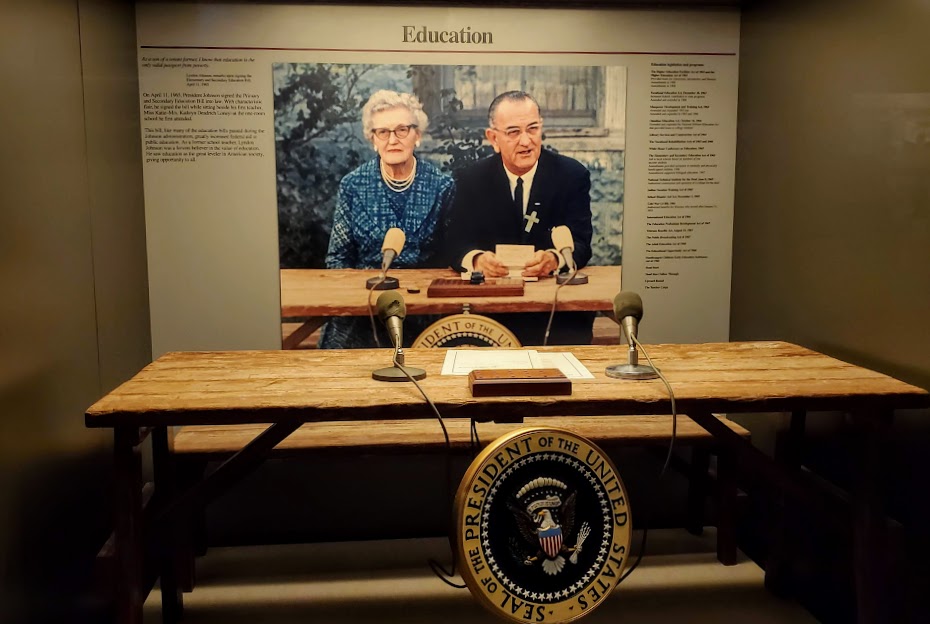 In 1969 when the National Park Service was given the boyhood home, it had been altered considerably. It took the NPS with the help of many people, three years to restore the home to its 1920s appearance using materials of the same type and age and using historic construction and furnishing techniques. It took three years for the restoration to be completed, opening the home to the public in 1973.

After the tour was over, we wandered around the grounds looking in the shed, in the barn and noticing how far the outhouse was from the house. 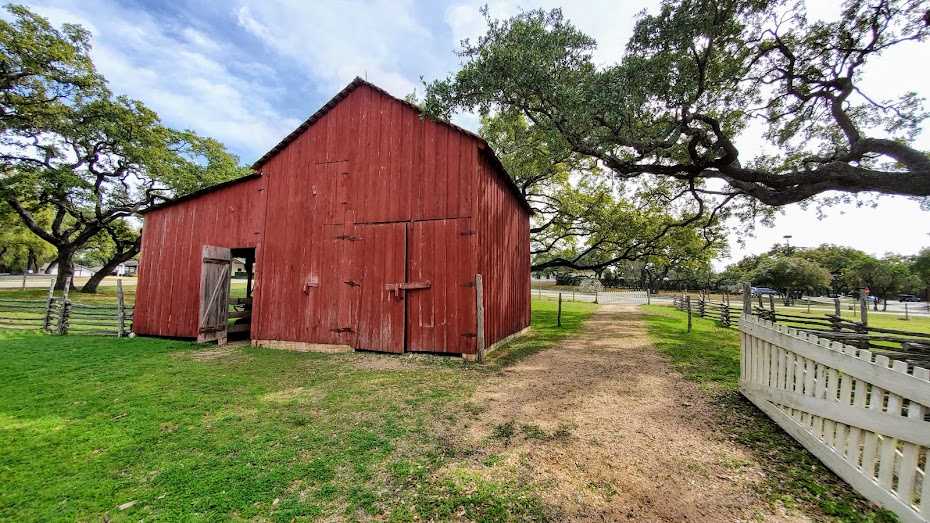 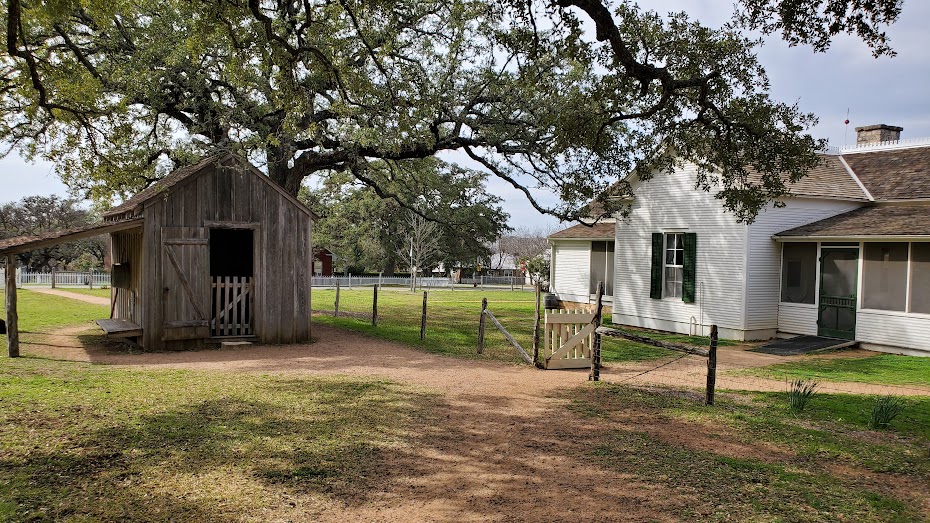 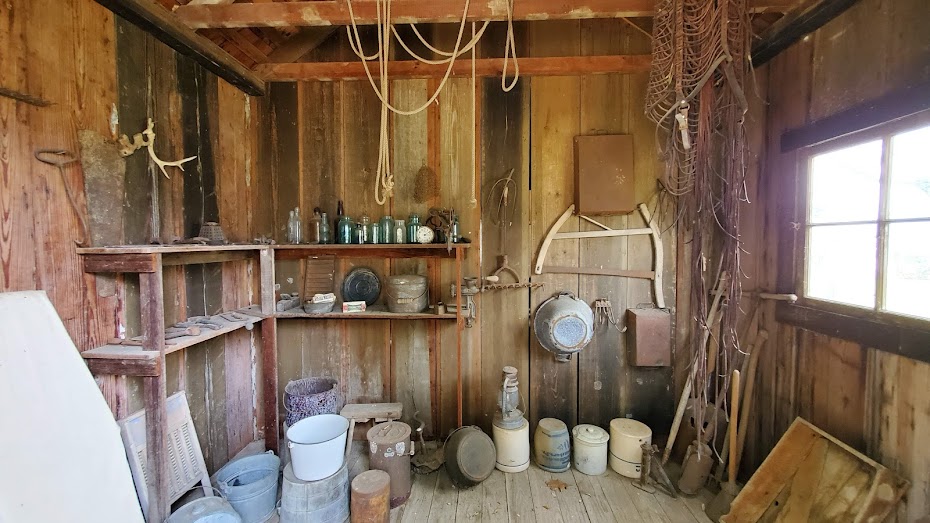 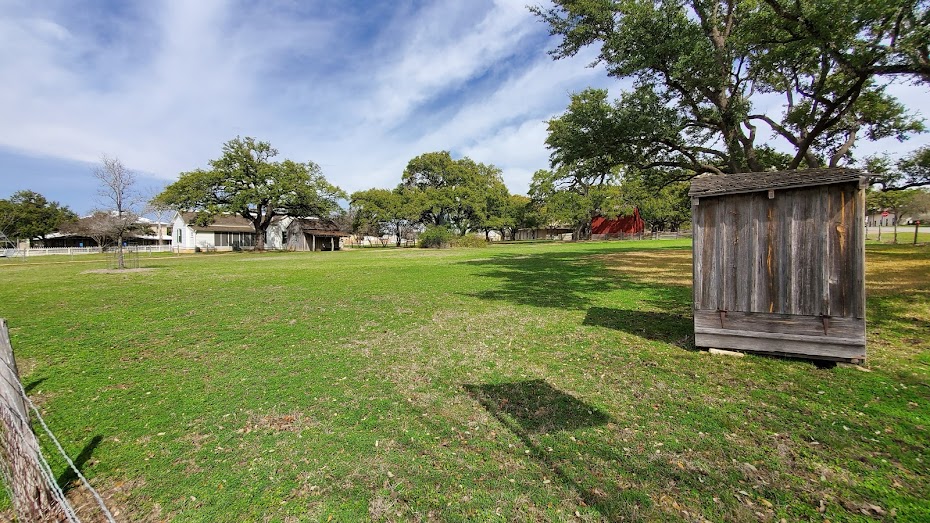 By the time the tour was over, we were hungry so next on our agenda was a visit to the Lady Bird Lane Cafe. 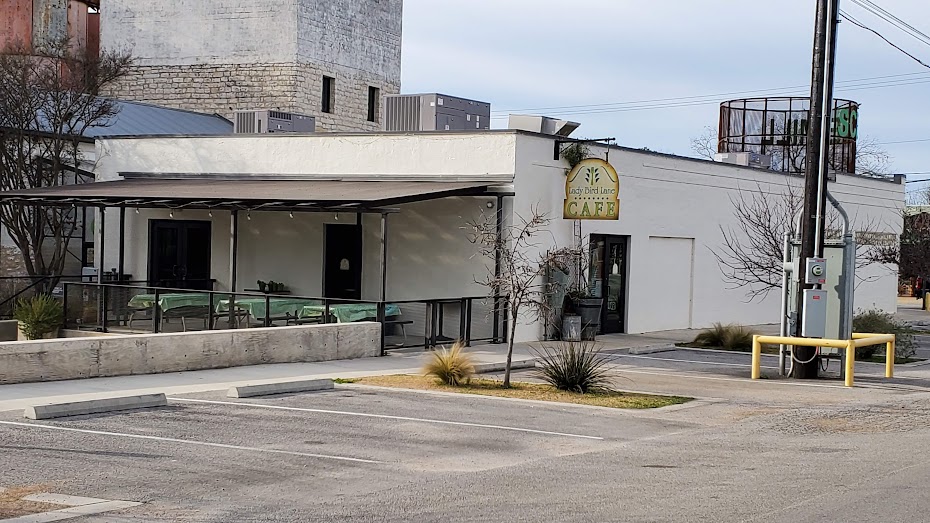 After ordering a Bacon, Tomato, Avocado and Harvarti Cheese Sandwich on focaccia ($9) for me and a bowl of “Pure Texan” Chili ($8) for Rob at the counter, we found a table outside. Within a few minutes, our lunch was brought out to us. Really good! 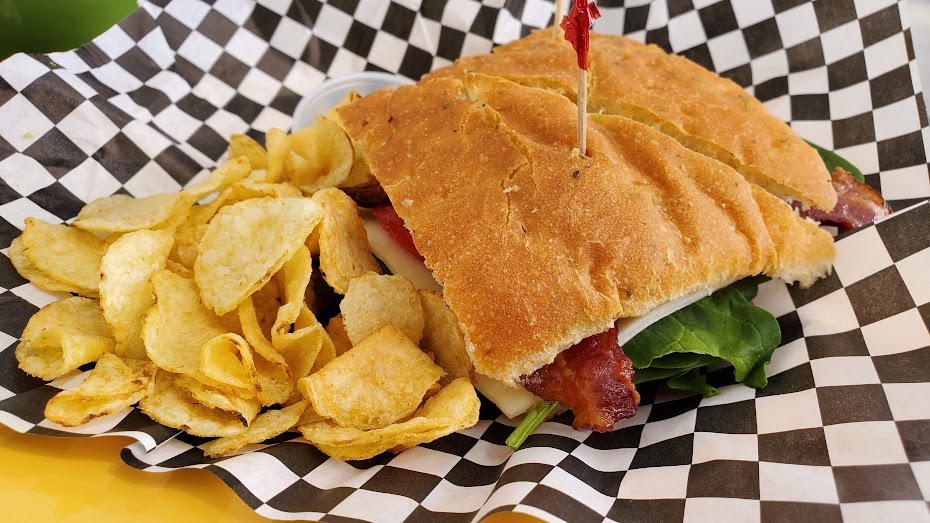 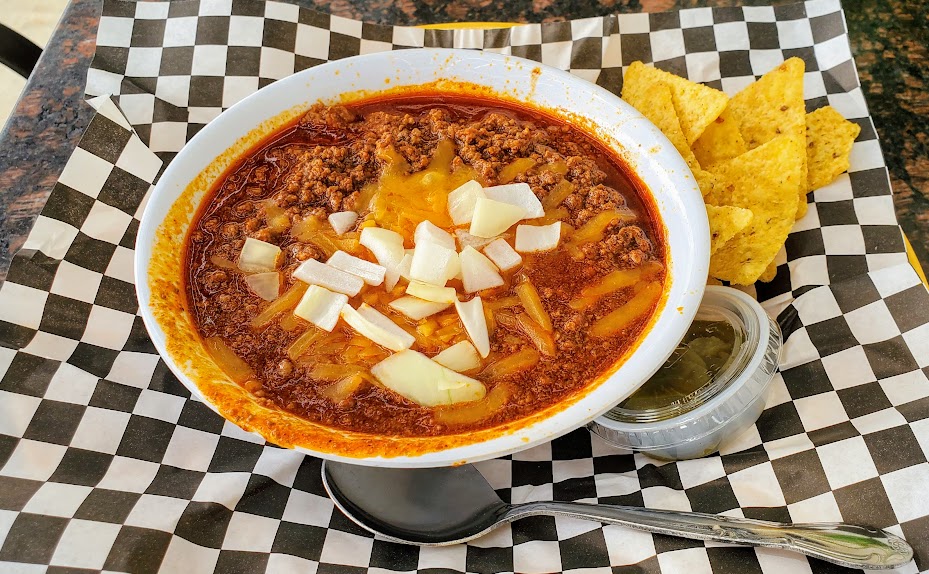 Next on the agenda after lunch was to explore the Johnson City Settlement by following the one mile nature trail near the Visitor Center. 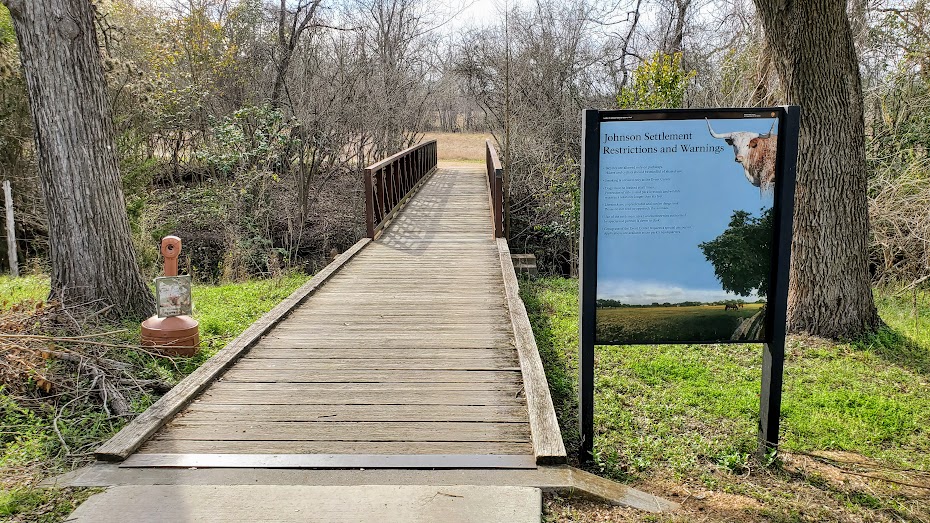 The Johnson Settlement was the frontier home of LJB’s paternal grandparents, Sam E. Johnson, Sr. and Elizabeth Bunton Johnson. The Johnson cabin is considered a “dog trot” cabin, a very popular style in Texas. The west wing was built in 1856; the east wing was built in 1868. The shaded breezeway through which a dog could easily trot provided storage space and much needed relief during the blistering heat. 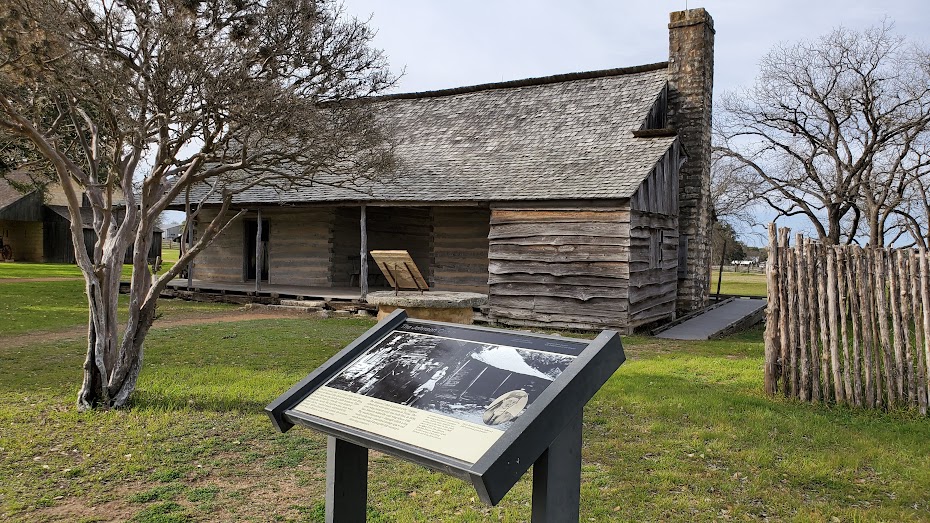 Between 1867 and 1872, Sam Johnson and his brother, Tom, drove huge herds of longhorn cattle from this homestead along the Chisholm Trail to Abilene, Kansas. The original cabin remains surrounded by barns and outbuildings that reflect nearly a century of ranching and farming on this land. 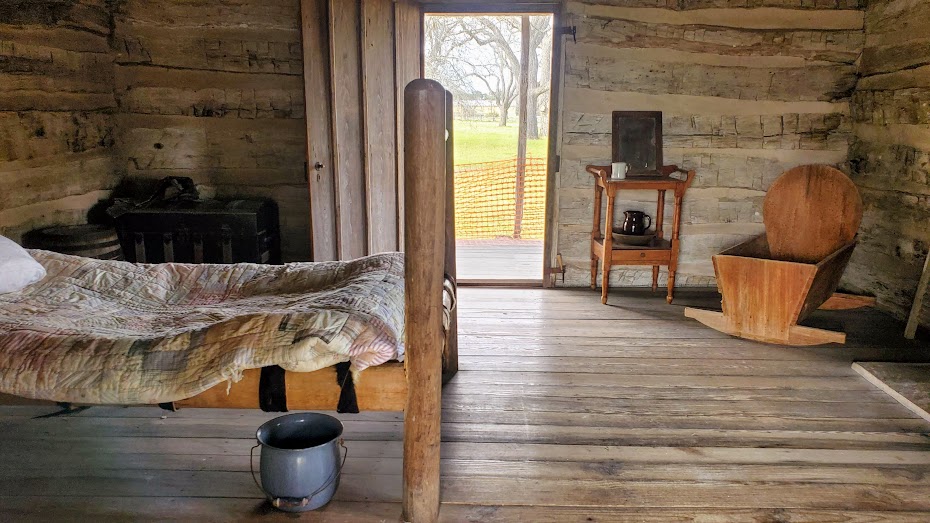 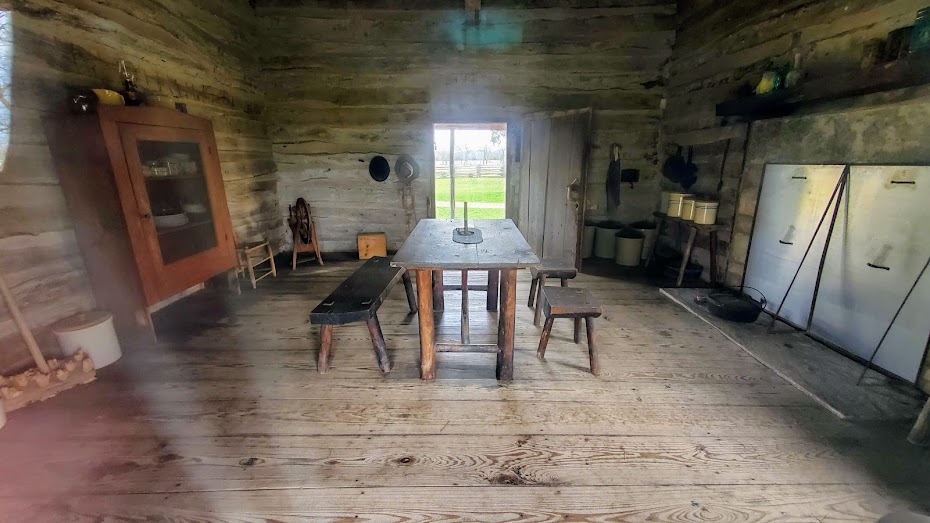 Not too far away from the cabin was the Bruckner Barn, a stone barn built in 1884 by John Bruckner, patriarch of the family who lived on site for 80 years. 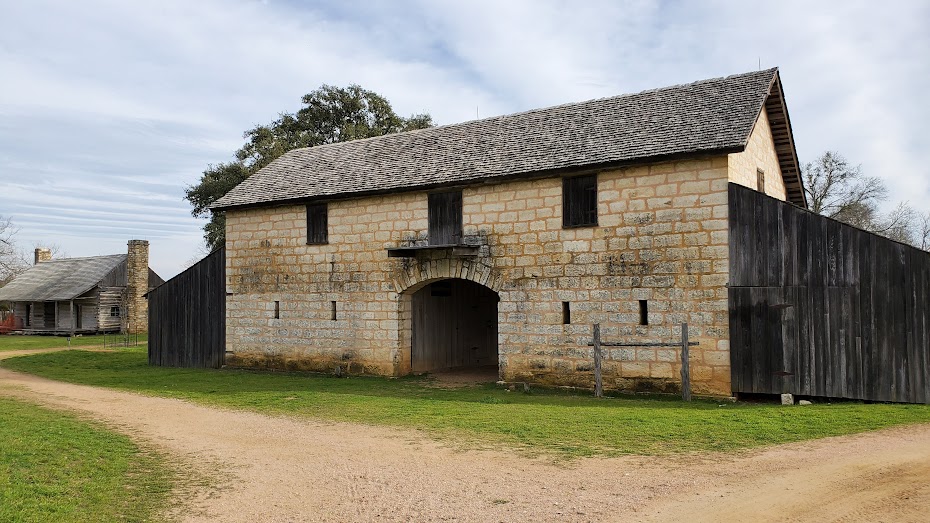 The building in the photo below is the James Polk Johnson Barn. President Johnson’s second cousin, J.P. Johnson owned this farm from 1872 to 1882 during the waning days of the open cattle range industry. He later founded the town of Johnson City on land that had once been his ranch. 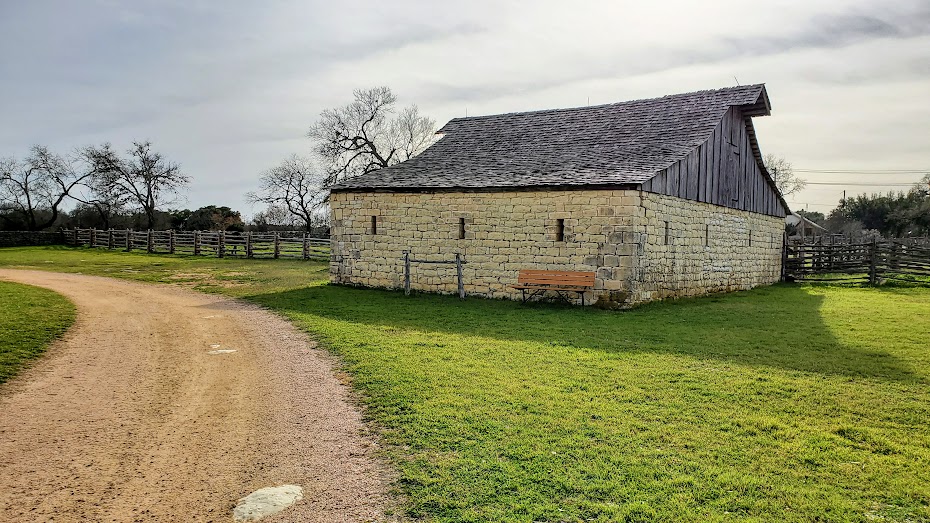 The Stubbs Cooler House, built by another Johnson relative, N.T. Stubbs, was used to store vegetables and other perishables. 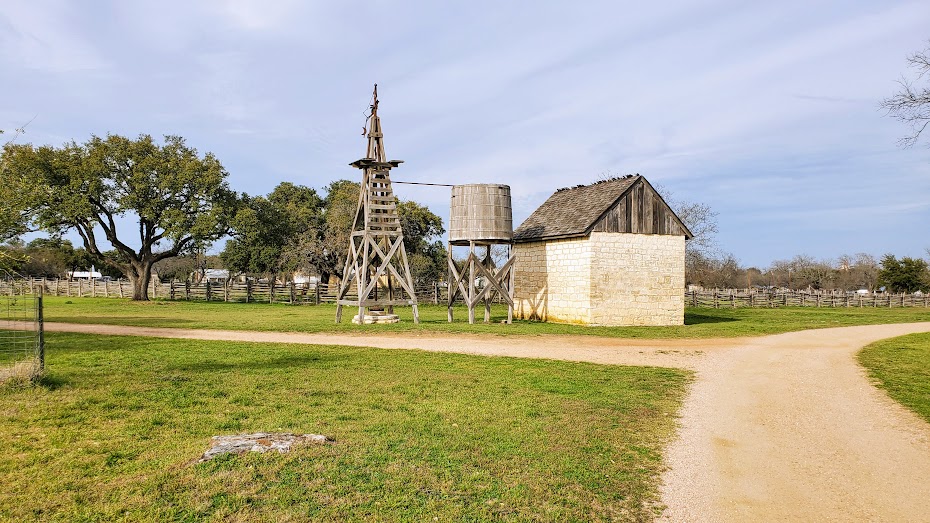 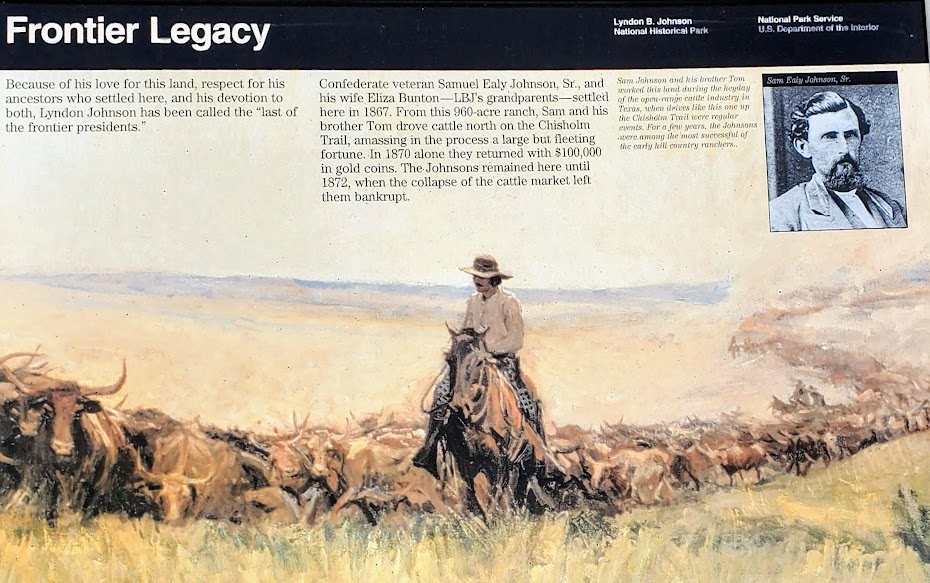 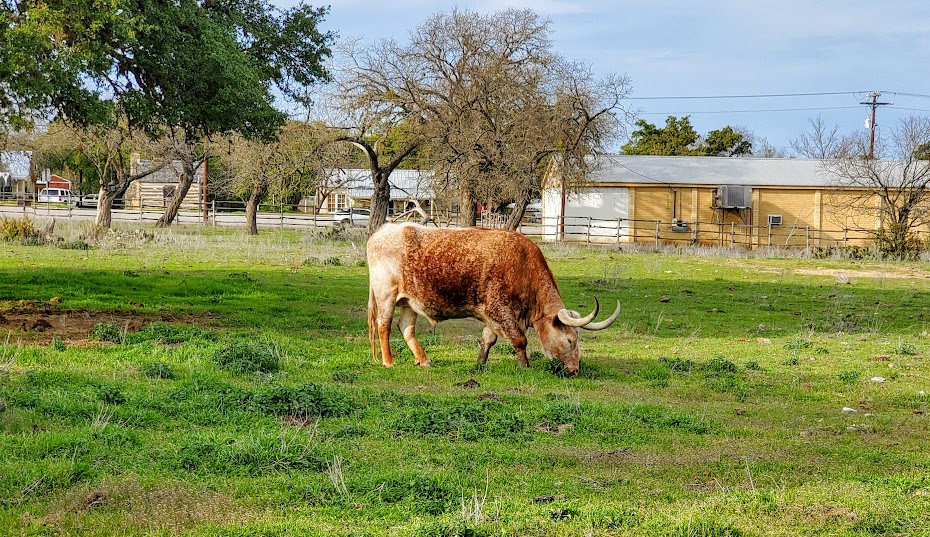 Once we finished the walk, we headed back to the coach – sadly we would be leaving the Fredericksburg area the next day to slowly start our drive eastward.

What a fantastic and educational few days we had visiting the Lyndon B. Johnson National Historical Park and State Park. For anyone staying in the area, visiting these attractions is a must do!