After all, being too young to vote in the 1960’s – 70’s, neither one of us knew much about our 36th President, Lyndon Baines Johnson. Yes, we knew that he was Vice President serving under John F. Kennedy from 1961-1963 until he was sworn in as President after Kennedy was assassinated on November 22, 1963.  And we knew that he served as President until 1969 when Richard Nixon became our 37th President. Our only other recollection of Johnson’s Presidency was the controversy regarding the Vietnam War. That became a very up close, personal and painful experience for my family when one of my older brother’s friends joined the Marines and was killed in action two weeks after his deployment to Vietnam. At 21 years old, he became one of the 58,000 Americans who were killed in Vietnam. It was a very sad and difficult time not only for our family and our community but the entire nation as well. 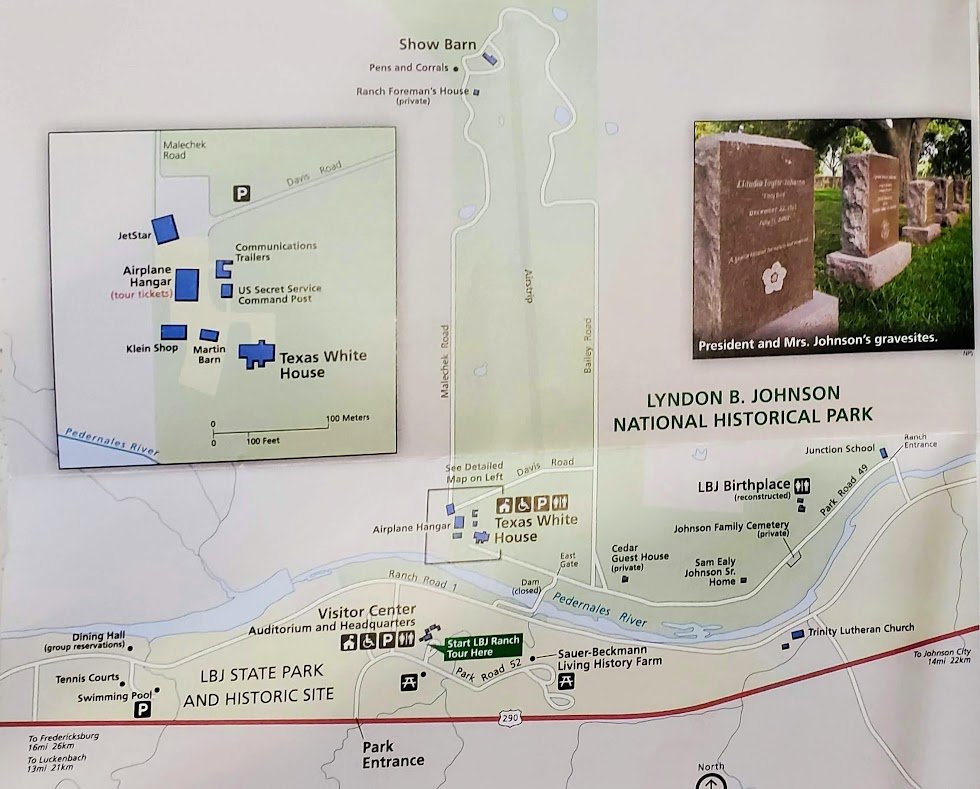 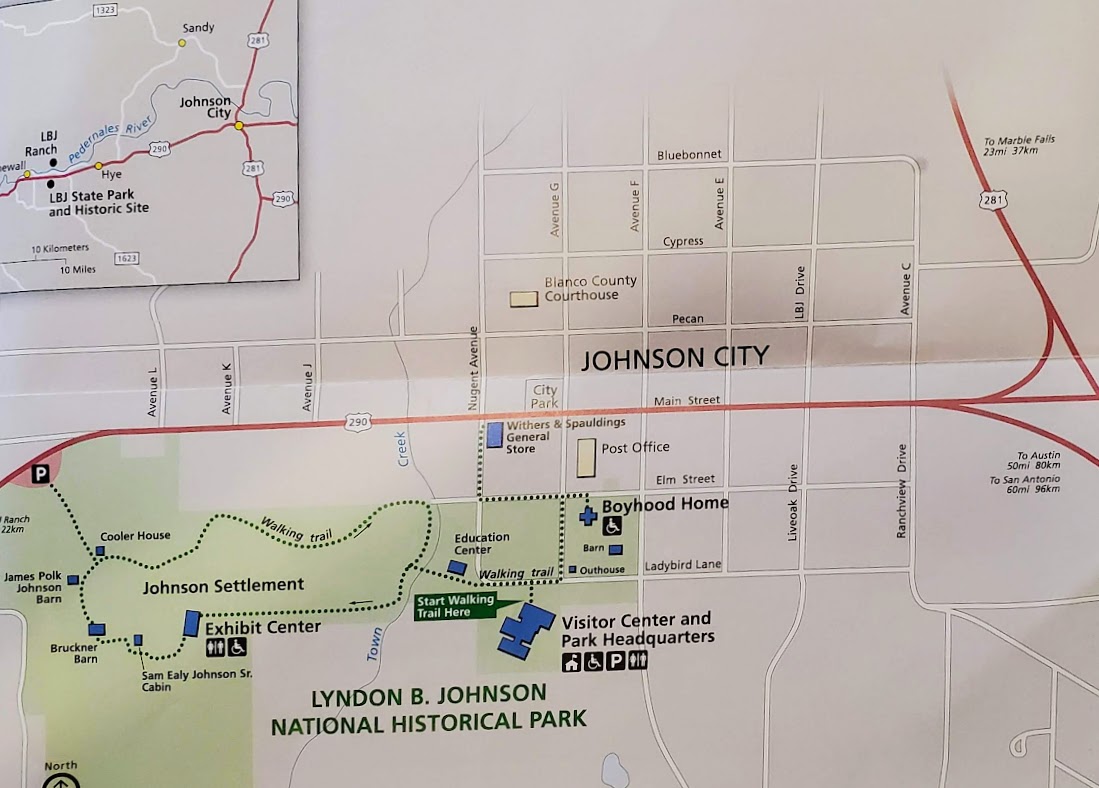 But since the parks were nearby and we had heard many rave reviews, we decided to pay our respects. The National Historical Park is divided into two districts, one in Johnson City where Johnson spent his childhood and the other at the LBJ ranch (aka Texas White House) near Stonewall. In addition the Lyndon B Johnson State Park and Historic Site is directly adjacent to the National Historical Park.

We spent two full days learning all about LBJ – the child, the man, the teacher, the politician and the many accomplishments of his single term administration. We learned that our somewhat jaded recollection of his legacy extends well beyond the Vietnam War and a staggering number of accomplishments, benefits and successes can be attributed to him. We also learned that the saying “behind every great man is a great woman” holds true as evidenced by his relationship with his wife, Lady Bird Johnson. Not only was she an advisor to him during his political career, she herself earned numerous commendations as an author, an activist and an environmentalist, not to mention building a very successful radio station business. 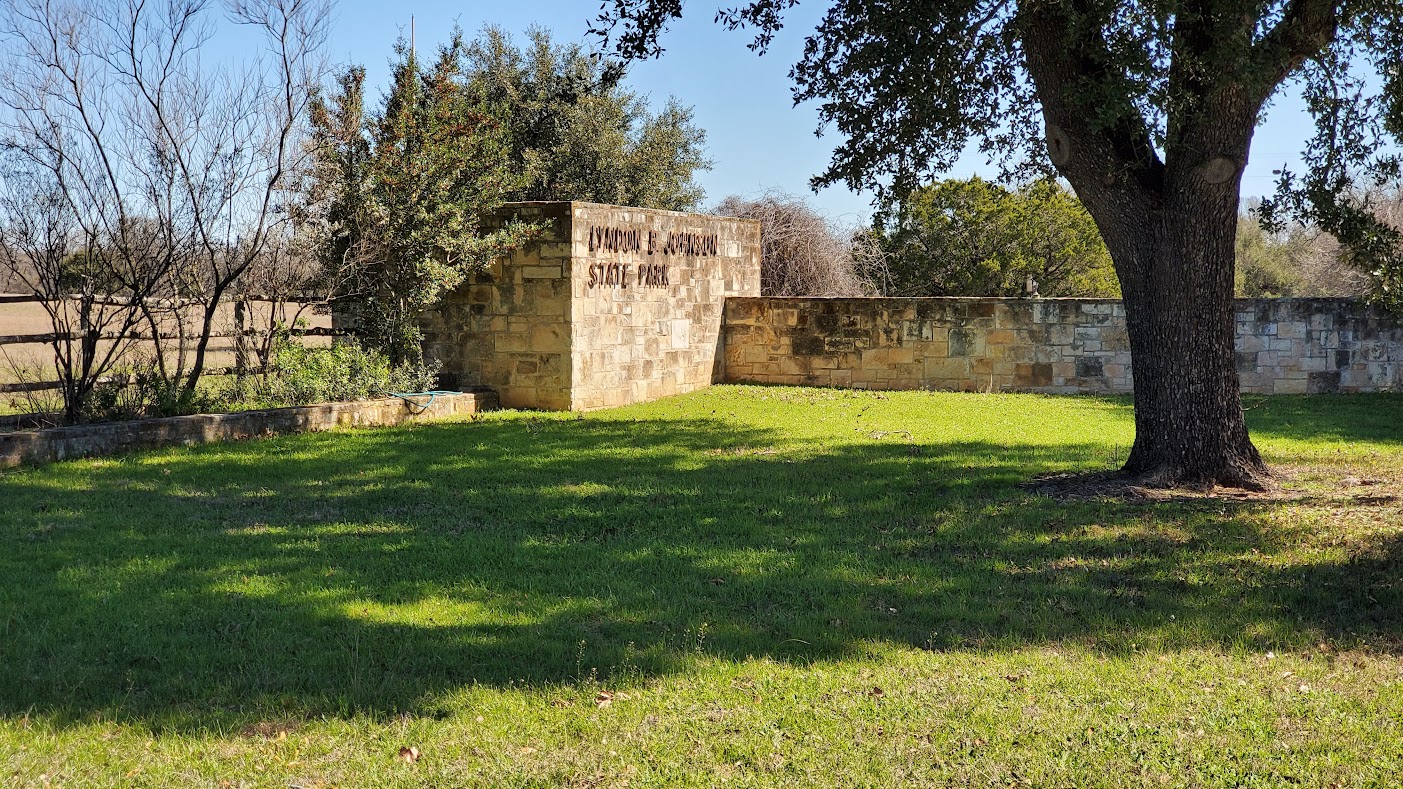 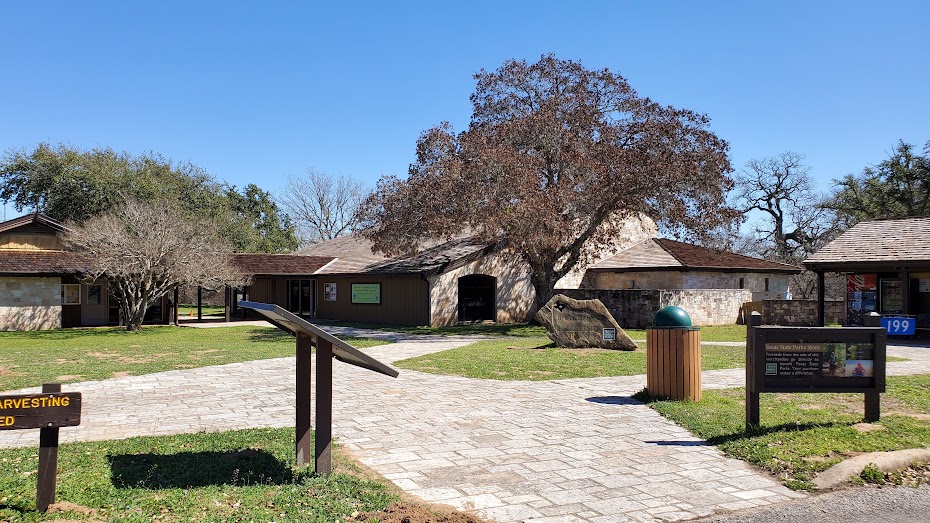 Located 18 miles east of Fredericksburg on the south side of the Pedernales River is the LBJ State Park Visitor Center in Stonewall which we visited first. It was a scenic and pleasant drive along US-290 which is known as Wine Road 290, home to 22 award winning wineries. For anyone interested in enjoying a wine tasting (or two or three or more), driving this route is a must!

At the Visitor’s Center, a park ranger explained that the Johnson family’s vision was to preserve the properties for visitors from around the world so there is no entrance fee to tour the grounds and the buildings. However, to access the grounds each visitor must obtain a driving permit and a self driving tour map. Before starting on the driving tour, at the recommendation of one of the rangers, we walked the 1.2 mile Nature Trail, passing longhorns relaxing under pecan trees and white tail deer (the sign said they were there but we didn’t see any) along the way to the Sauer Beckmann Living History Farm, built by German immigrants. Read about the history of the Sauer and Beckmann families and their farm at the Texas Parks & Wildlife Department. Four acres of the land were sold to President Lyndon B. Johnson in 1951. In 1966, the site was sold to the Texas Parks & Wildlife Department (TPWD). 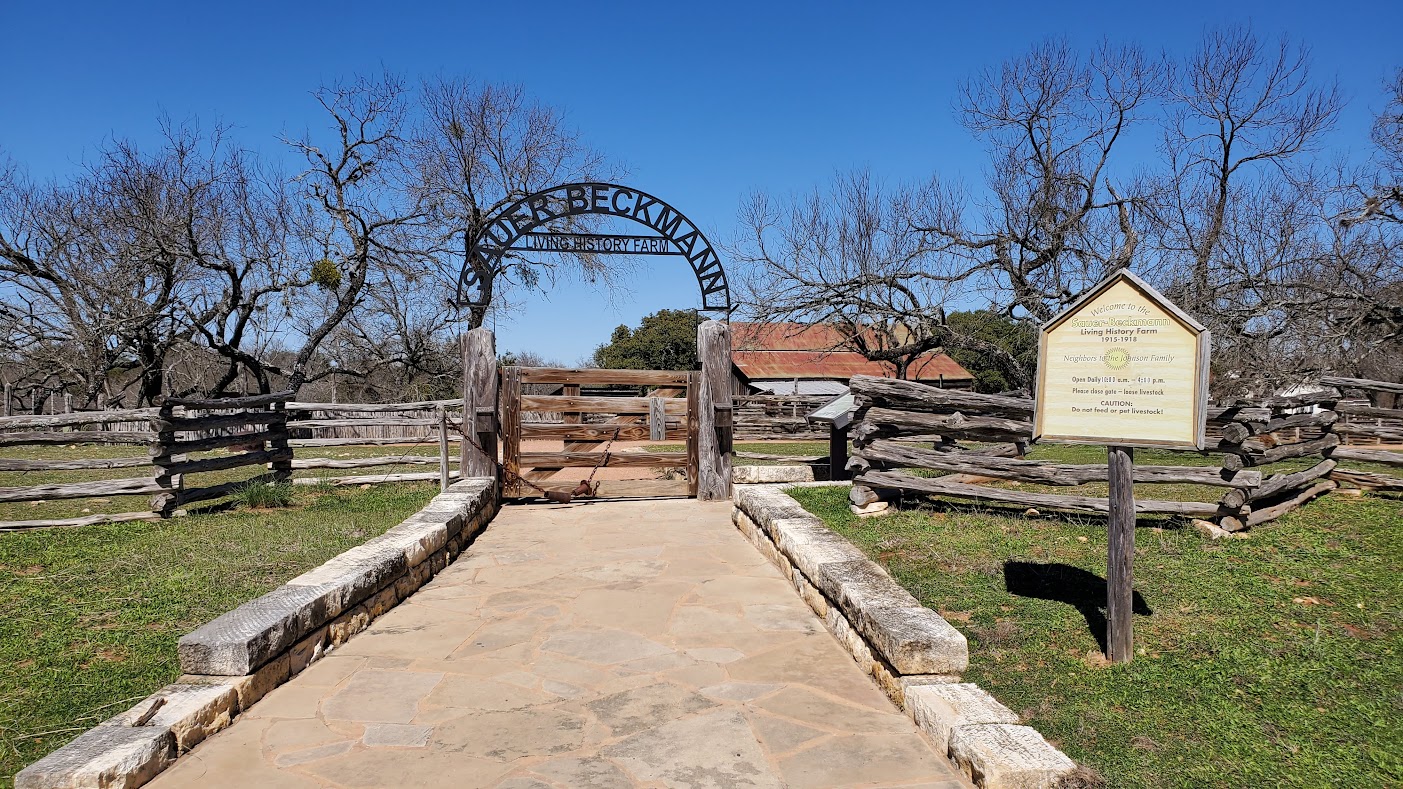 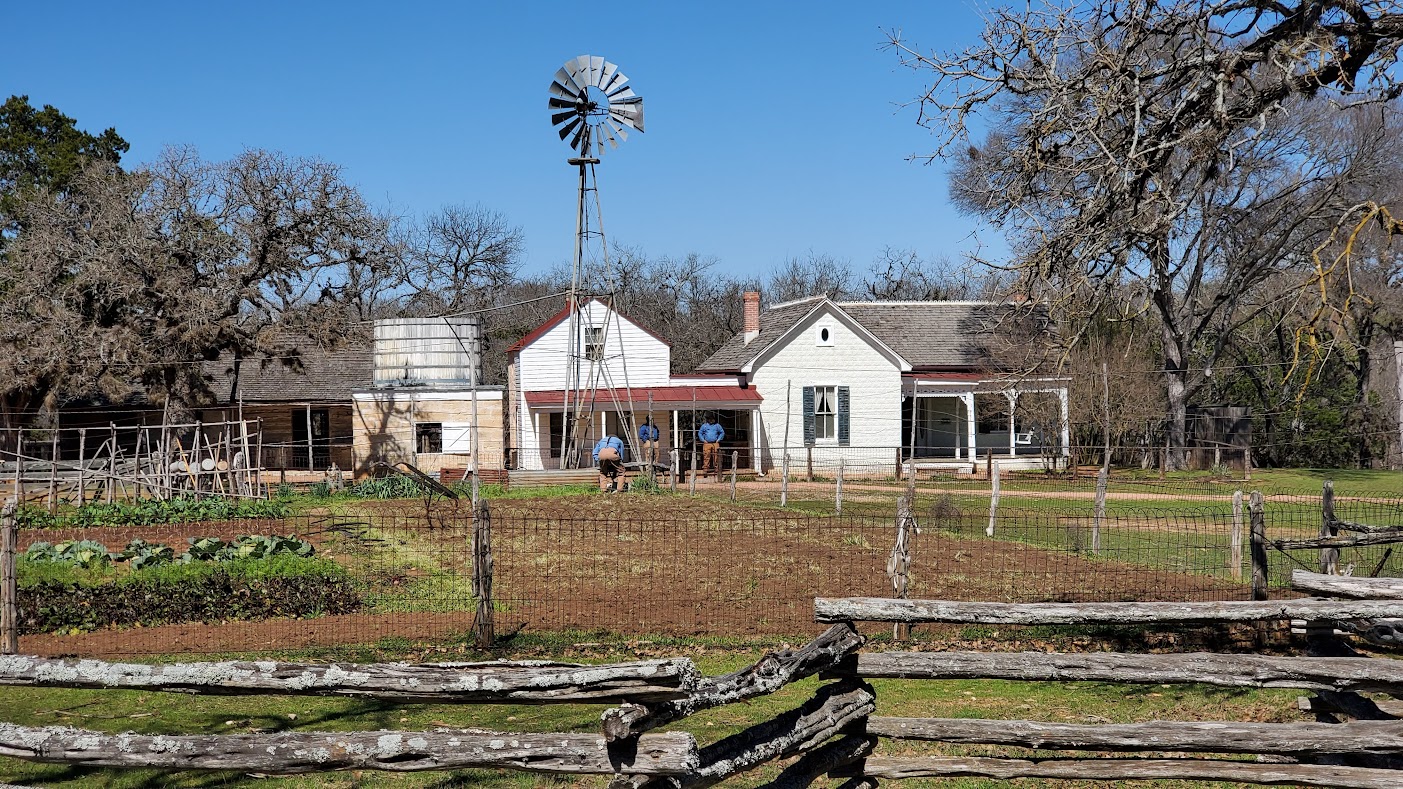 Today, the farm operates year round thanks to the efforts of interpreters and rangers, all dressed in period clothing. Outside tasks that they perform include caring for the animals, slopping the hogs, working the garden, making sausage, smoking meats and maintaining the property and equipment. 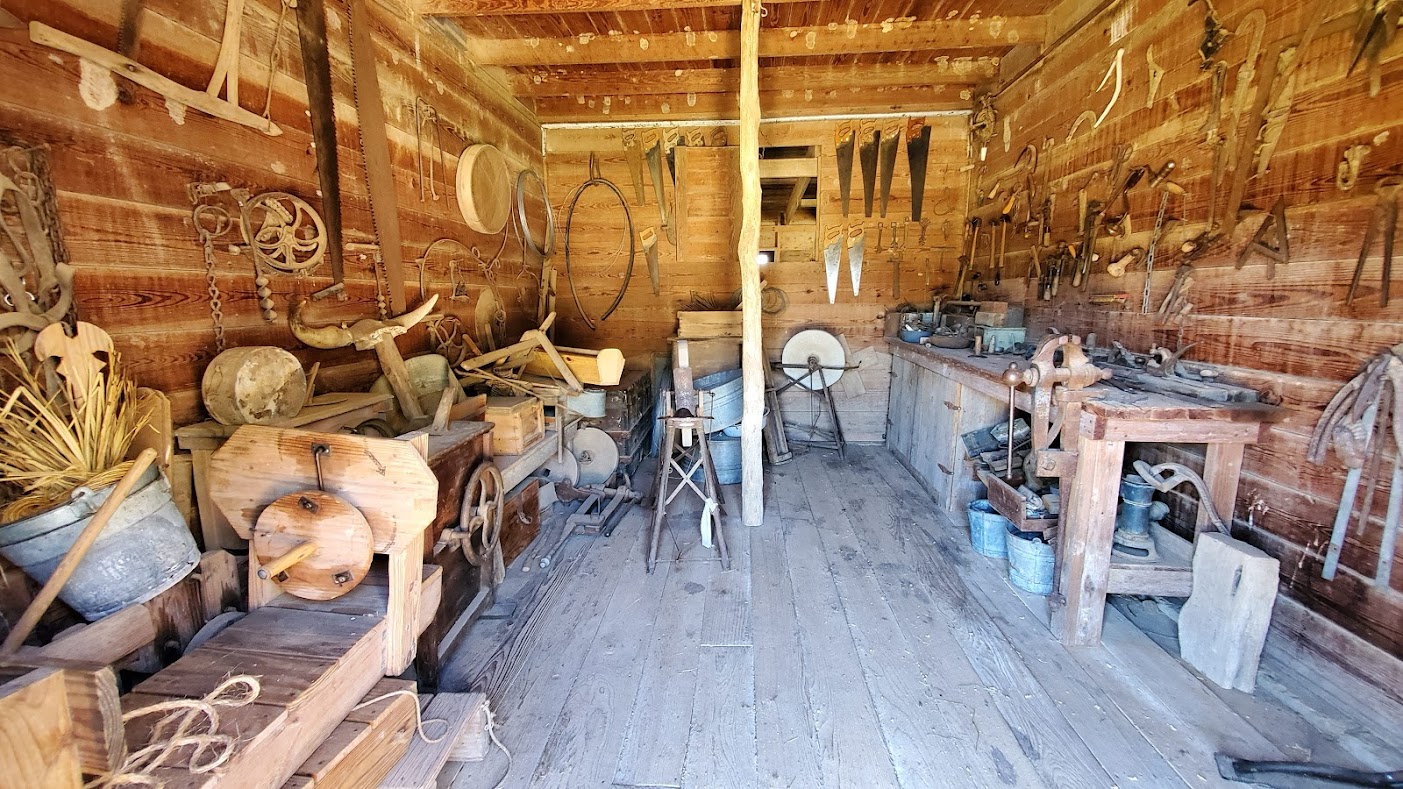 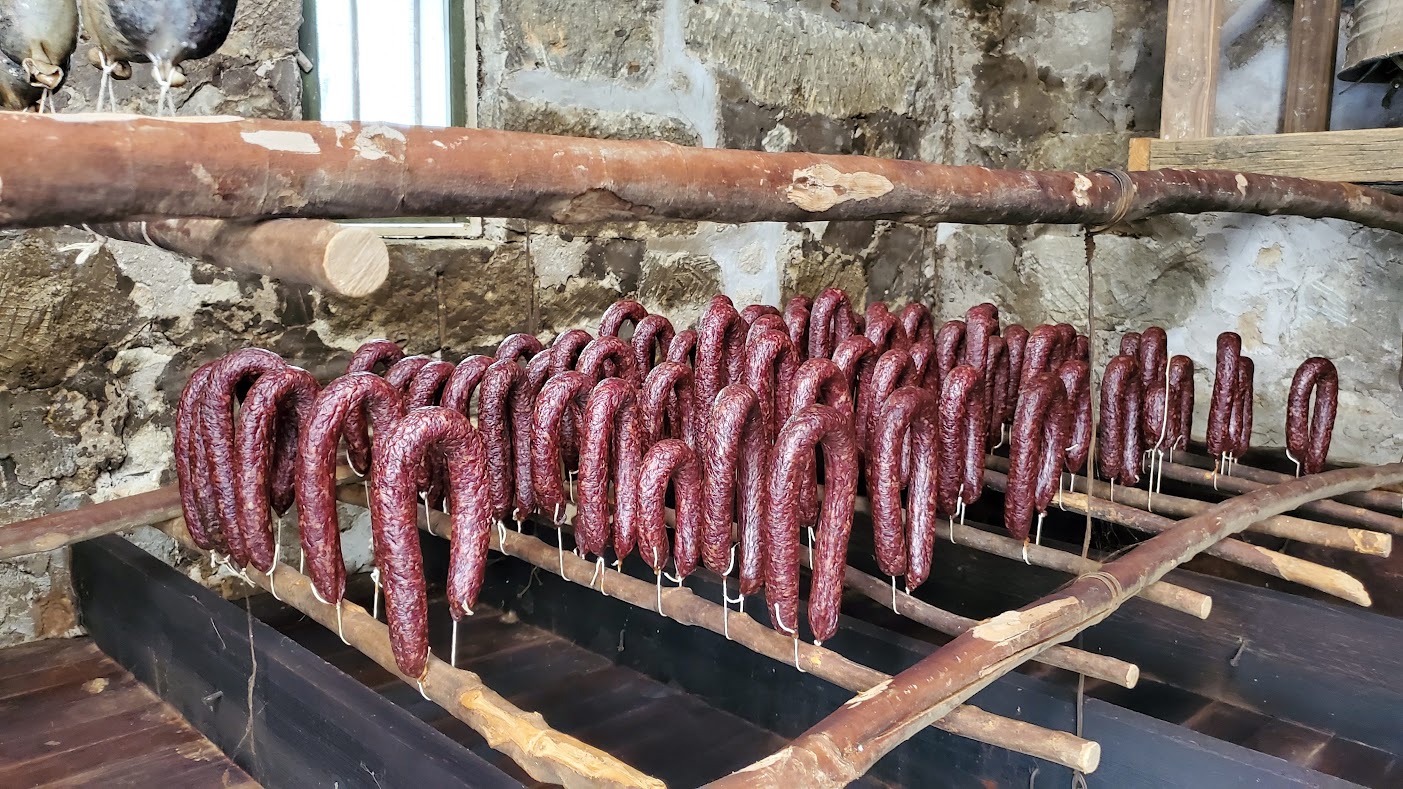 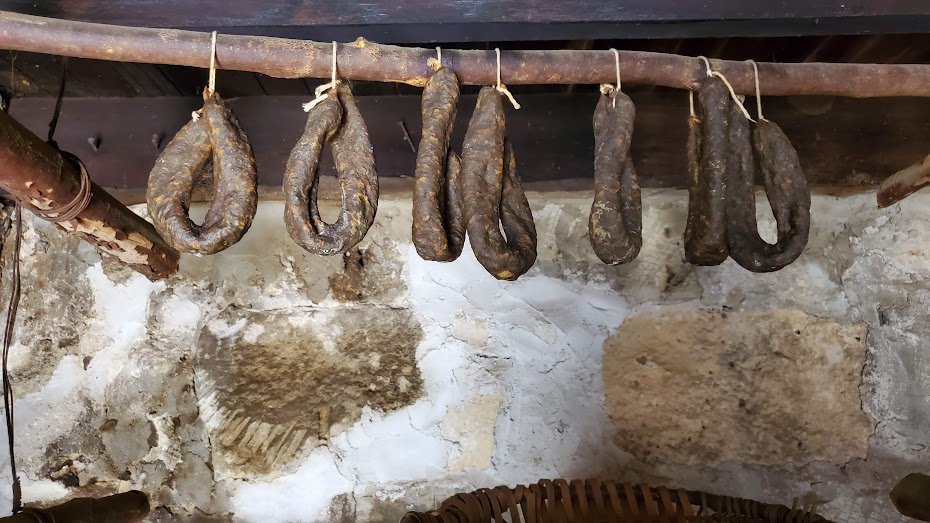 Inside, in addition to cleaning, making lye soap, churning butter, making cheese, grinding corn and pickling and canning vegetables are among the many everyday tasks. 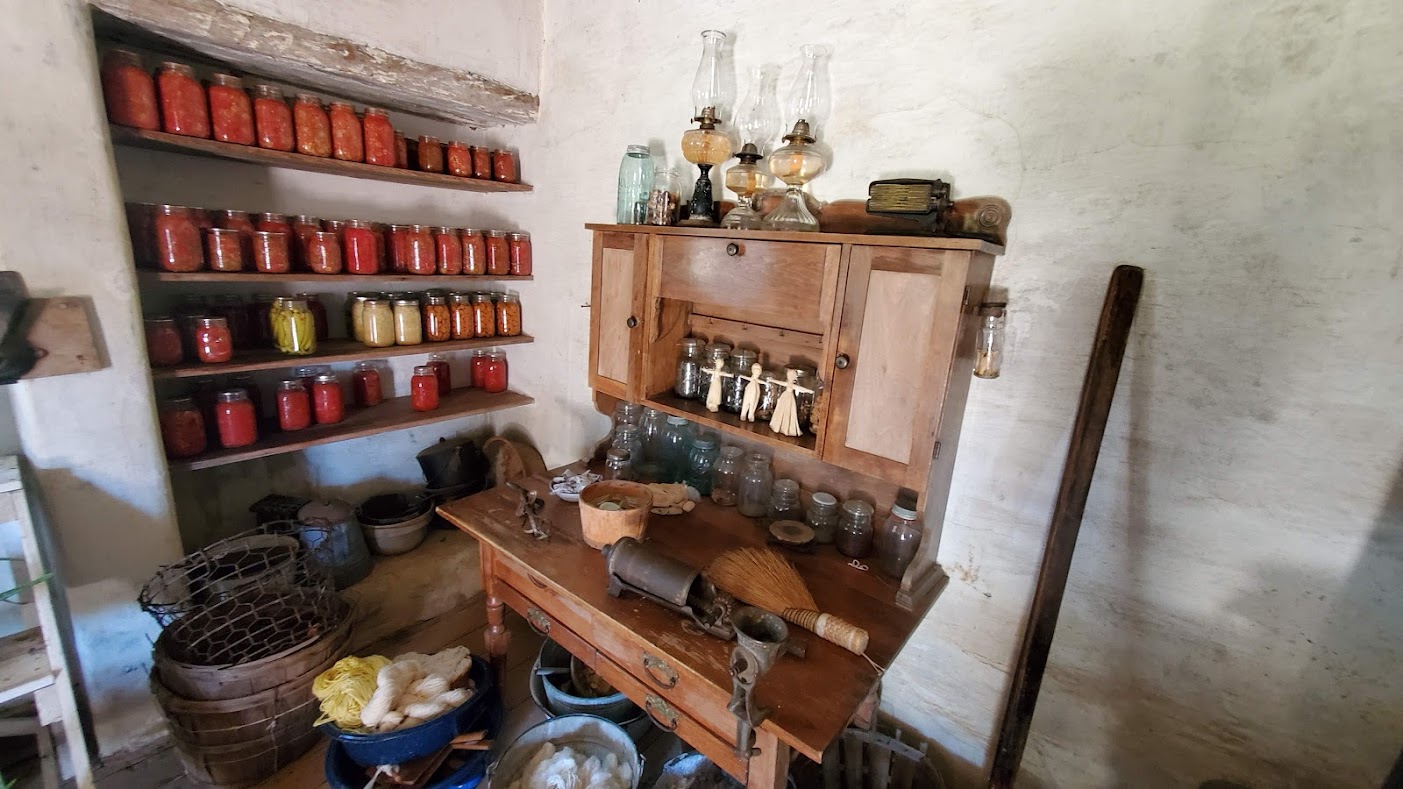 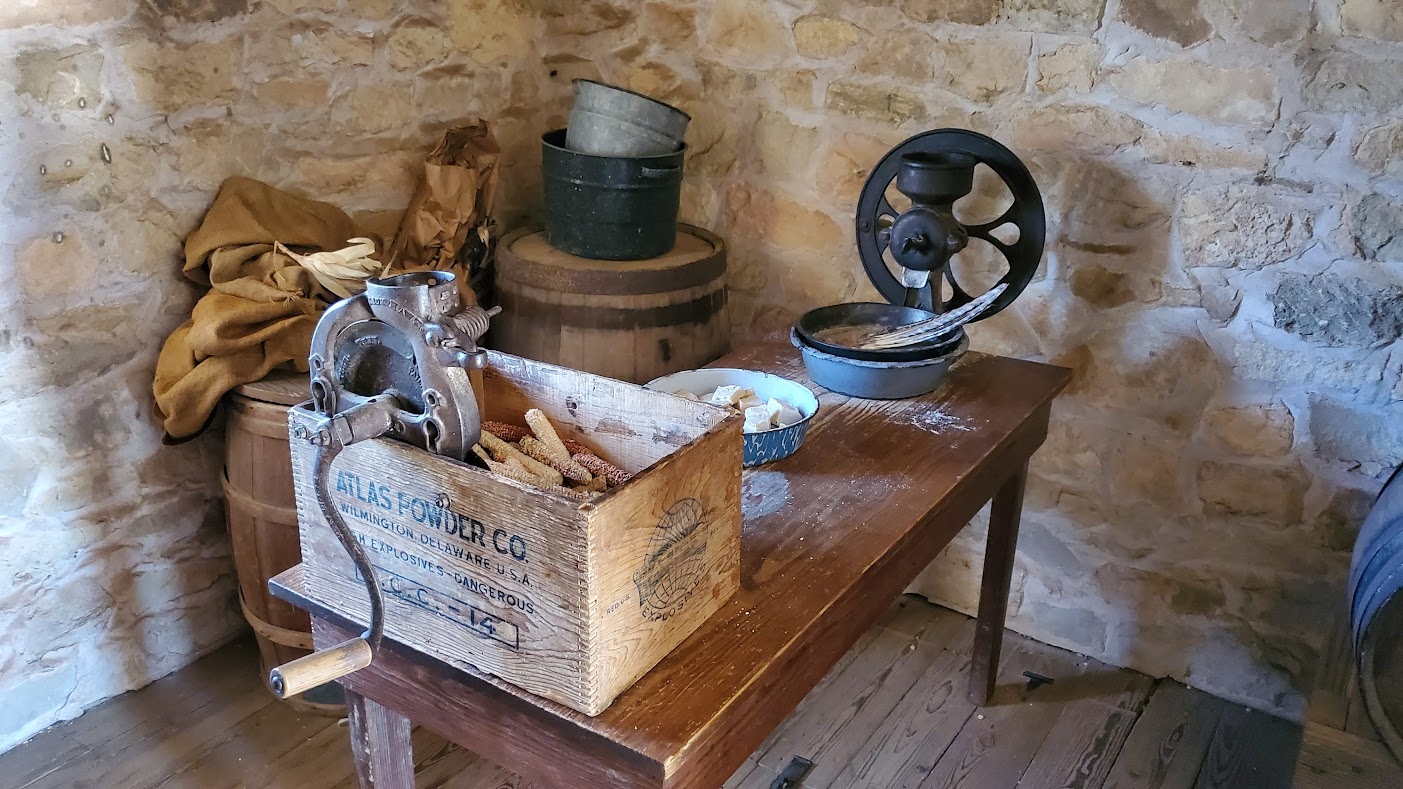 Amazingly they do all this without running water or electricity! Talk about stepping back in time! As we wandered around the farm, it felt like we were back in the 1800’s. 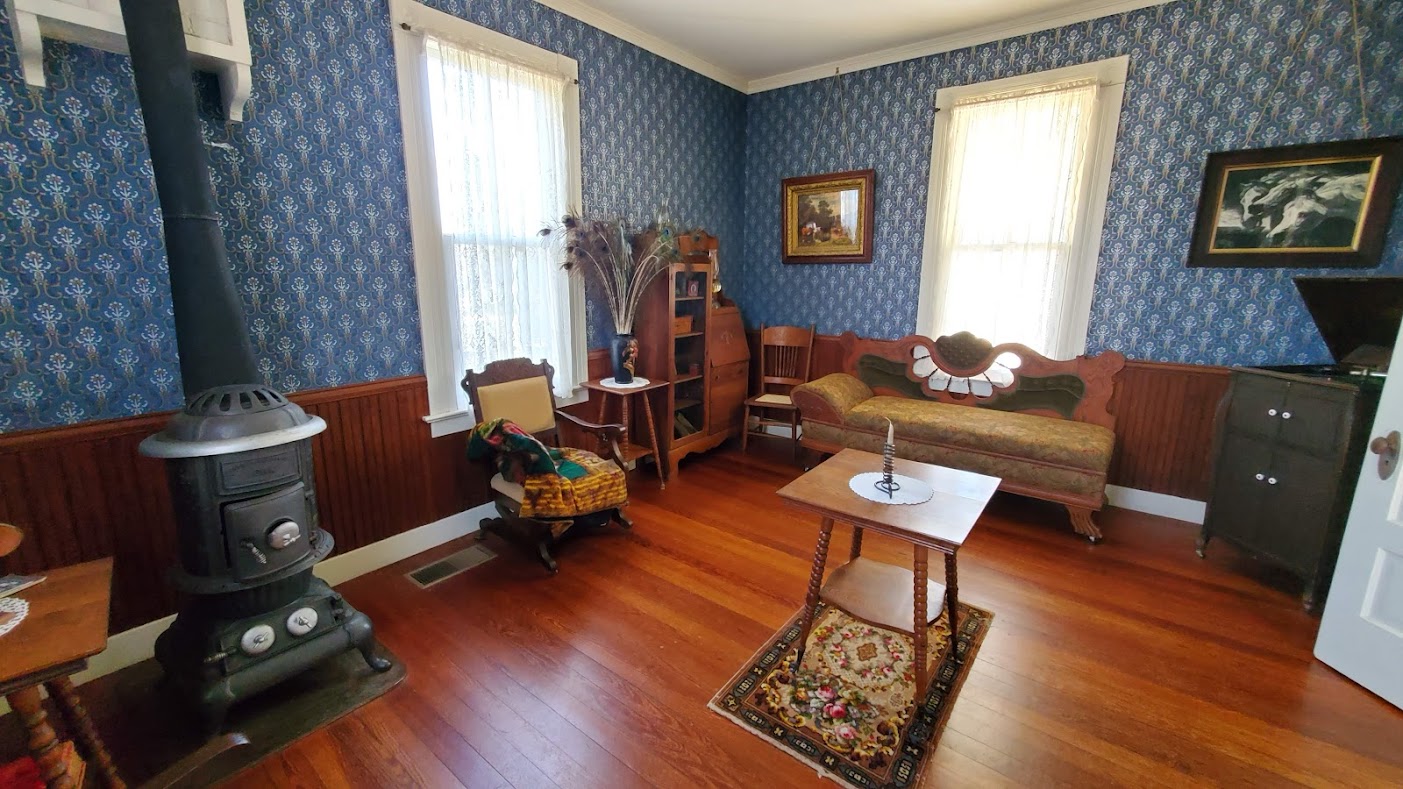 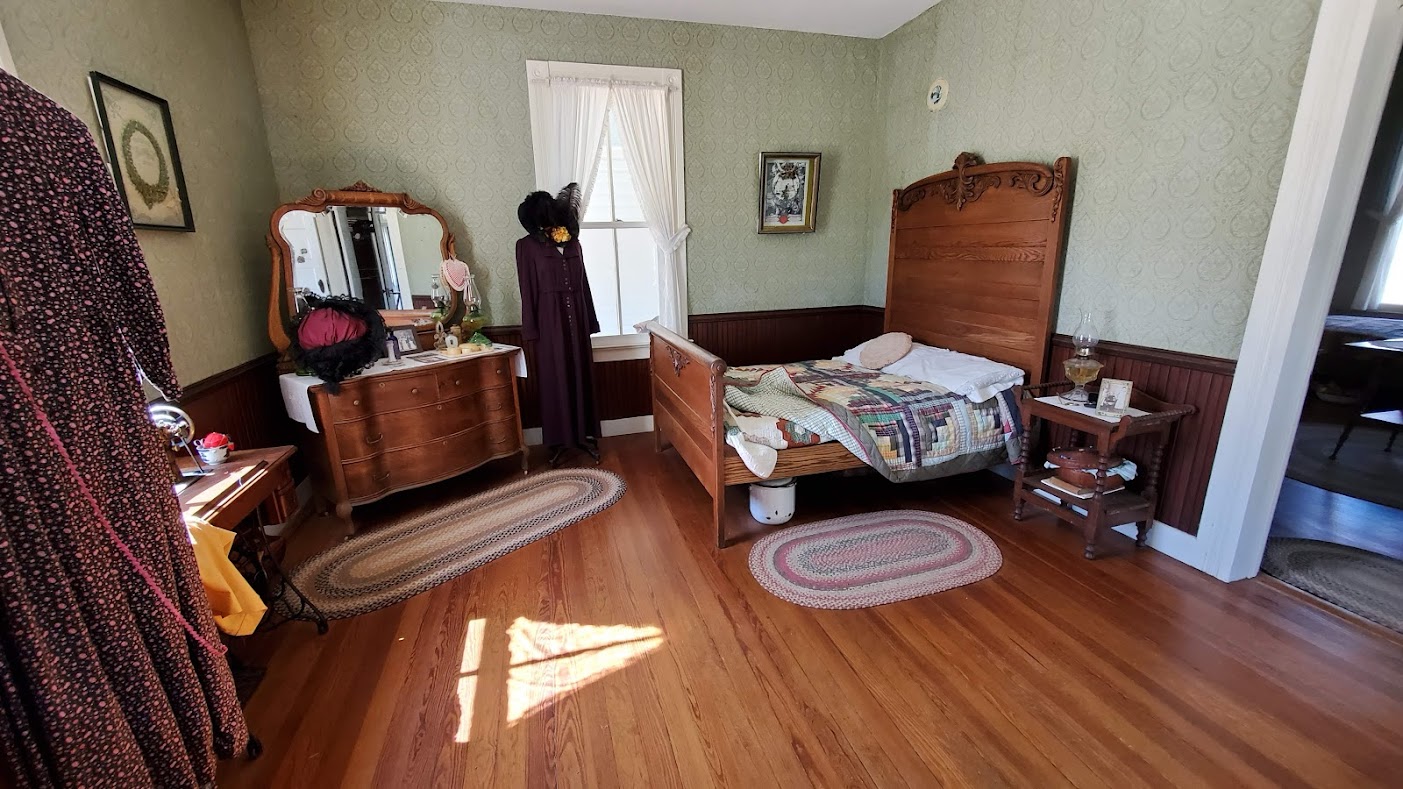 Meandering inside the farmhouse, we eventually found ourselves in the kitchen where fortunately a group of the volunteers/rangers were having a typical German lunch. Although we don’t remember exactly what they were having, it was prepared from veggies grown in their garden and sausage that had been smoked on the farm. Talking with them gave us a chance to not only learn more about the history of the farm but to also learn a lot of details about their jobs and the day to day operations of the working farm.

Knowing that we had a lot more to see and do, we walked back to the Visitor Center to begin our drive through the Lyndon B. Johnson National Historical Park on the north side of the river. Not too far from the farm was a field where bison were grazing. Over 30 million bison used to roam the prairies of Texas and were a source of food for the Plains Indians. Sadly, though, over the decades they have been hunted commercially to the point of extermination. Today these majestic beasts only exist in parks and refuges. What a shame! 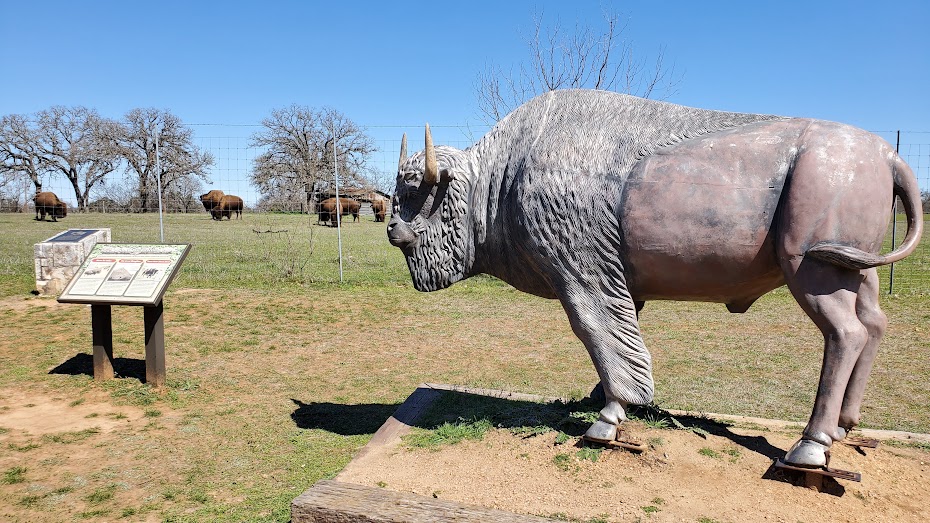 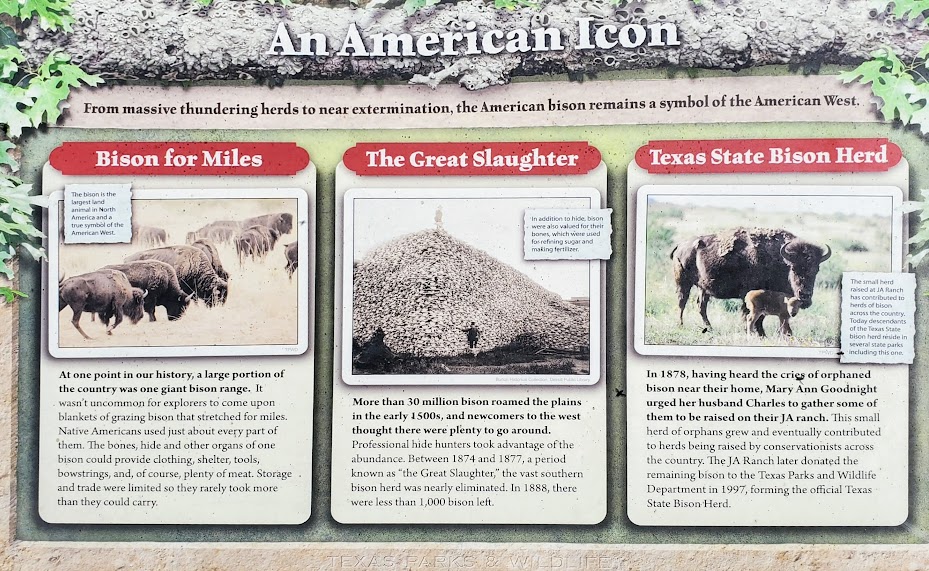 To start our drive, we had to cross the bridge over the Pedernales River. Prior to this bridge’s existence, the only way to get to the ranch was to drive across the dam. 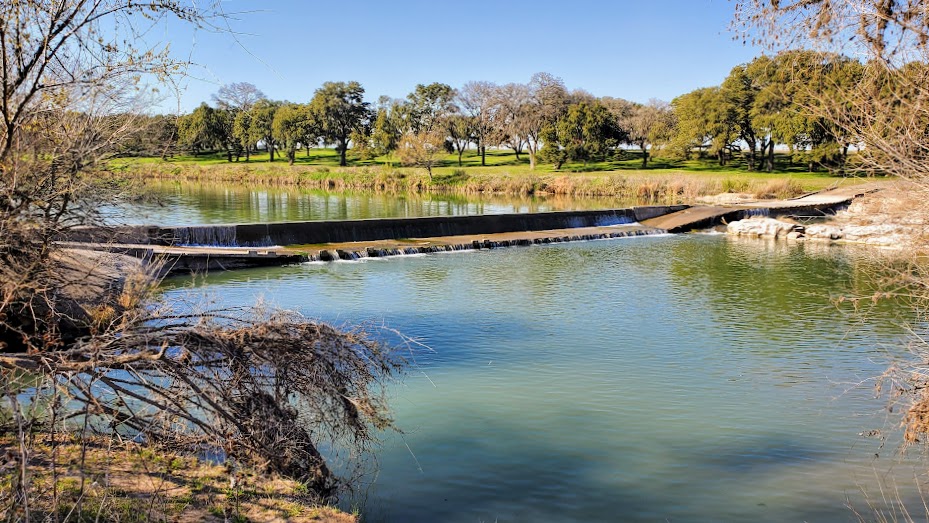 The scenery along the drive fluctuated between canopies of live oaks and lush green fields dotted with Hereford cattle. 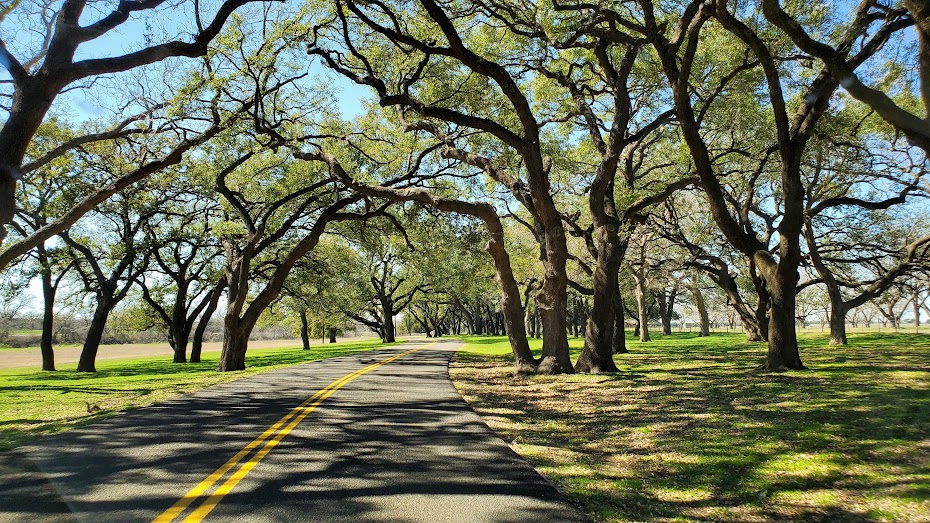 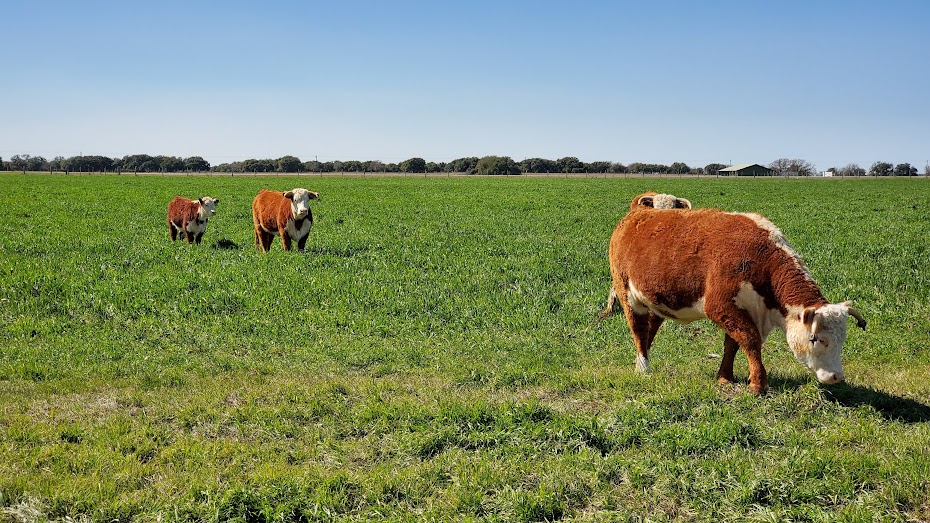 During the course of our day, we learned that LBJ was born on August 27, 1908 in a farmhouse in Stonewall, Texas, the first of five children of Sam Ealy Johnson Jr., a farmer, businessman and state legislator, and his wife, Rebekah Baines Johnson. When LBJ was five years old, the family moved to Johnson City, TX. 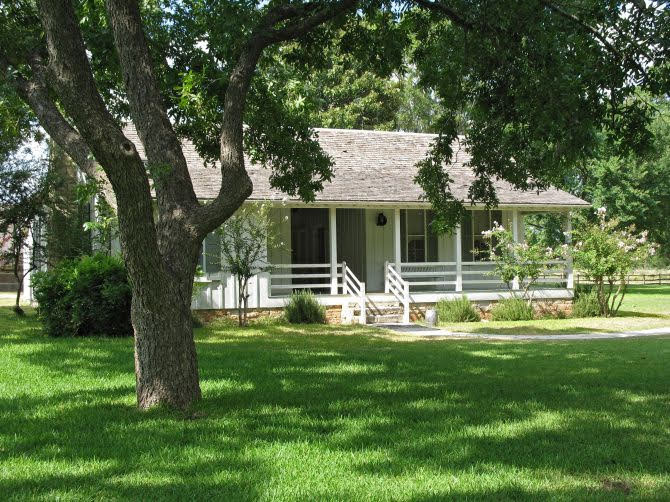 Junction School was a one room schoolhouse that LBJ attended when he was four years old. Read about the history of the school house on the National Park Service website. 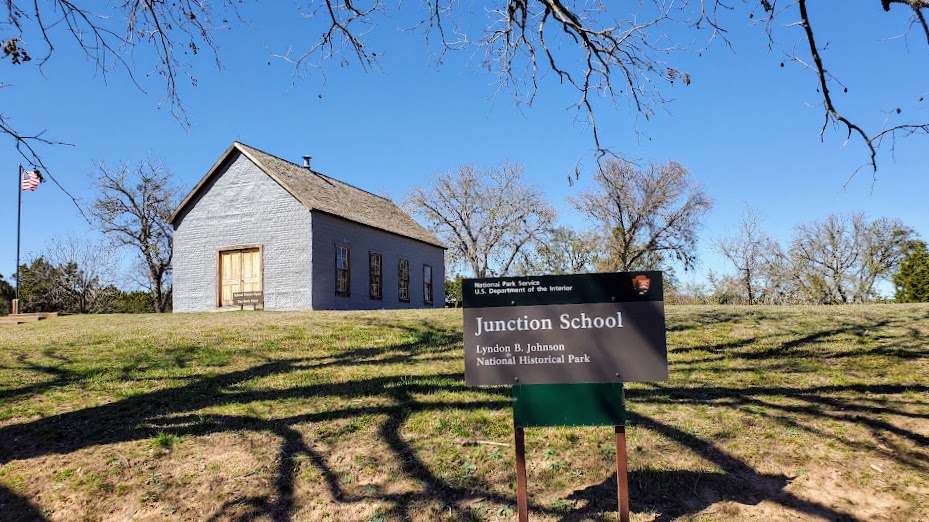 Trinity Lutheran Church in Stonewall which was where LBJ and Lady Bird worshipped any time they were “home” at the Texas White House. 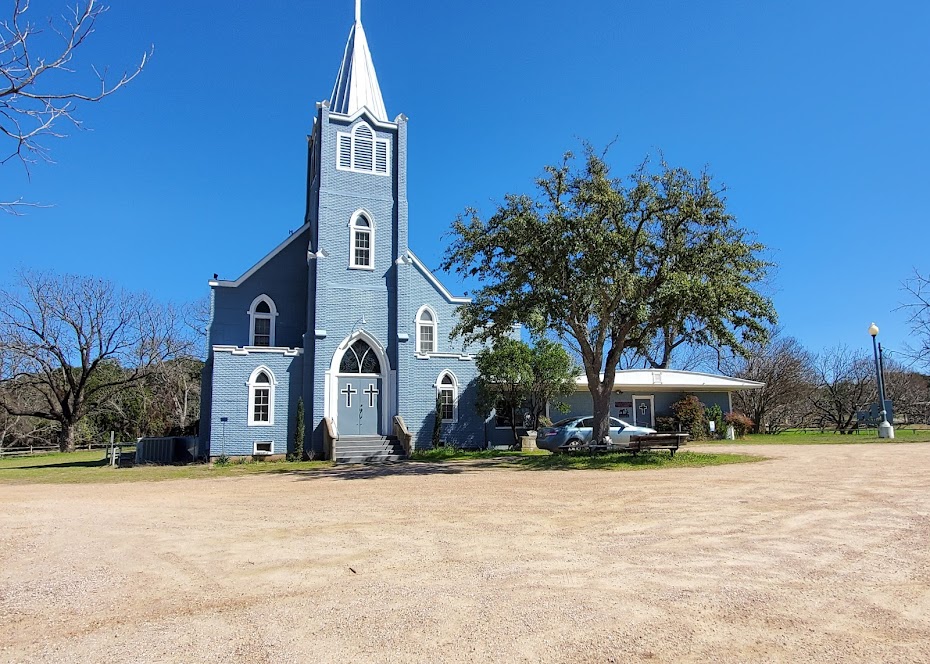 In 1951, Frank Martin, Johnson’s widowed aunt, in exchange for lifetime right to Johnson’s mother’s house in Johnson City, gave him her dilapidated 250 acre ranch which became the beginnings of the LBJ Ranch. In 1957, LBJ purchased 10 registered Hereford cows. Over the years, LBJ created a showcase 2,700 acre ranch, complete with 400 head of registered prize winning Hereford cattle. The herd that roams the ranch today are all descendants of the original cattle.

To ensure not only the environmental health, but also the prosperity of his ranch, Johnson utilized many new ranching practices such as crop rotation, field terracing, improved varieties of grasses, and the analysis of soil so appropriate ingredients of fertilizer could be determined. These practices in conjunction with the 300 bills that he signed into law dealing with the environment and conservation are part of his astounding legacy.

When President and Mrs. Johnson retired in 1969, they donated a portion of the LBJ Ranch so it could be added to the newly established Lyndon B. Johnson National Historic Site. One of the stipulations of that donation was that the LBJ Ranch remain a working ranch, and not a “sterile relic of the past.” 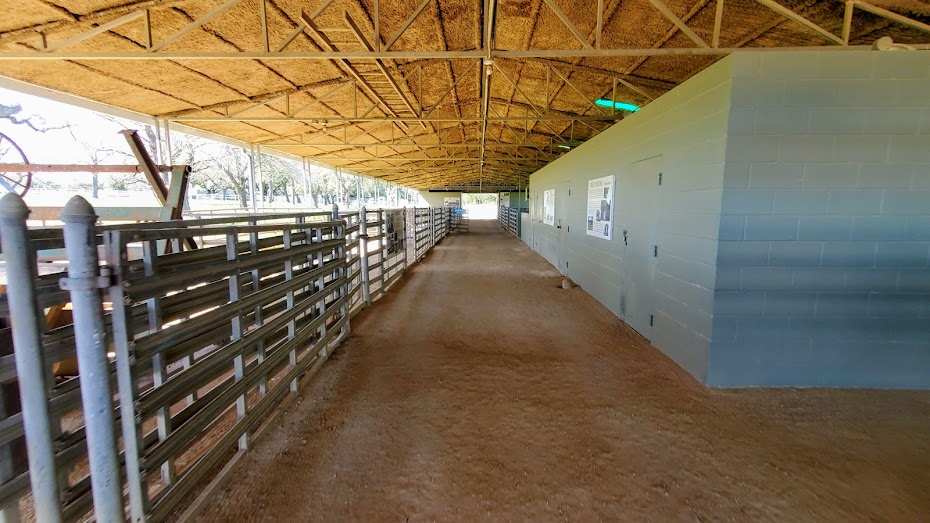 At the Show Barn, we learned the meaning of the term “working the cattle” (branding, ear tagging, weaning, hoof trimming, etc.), where LBJ chose to breed and show Herefords and the tools that they used and still use on a daily basis. 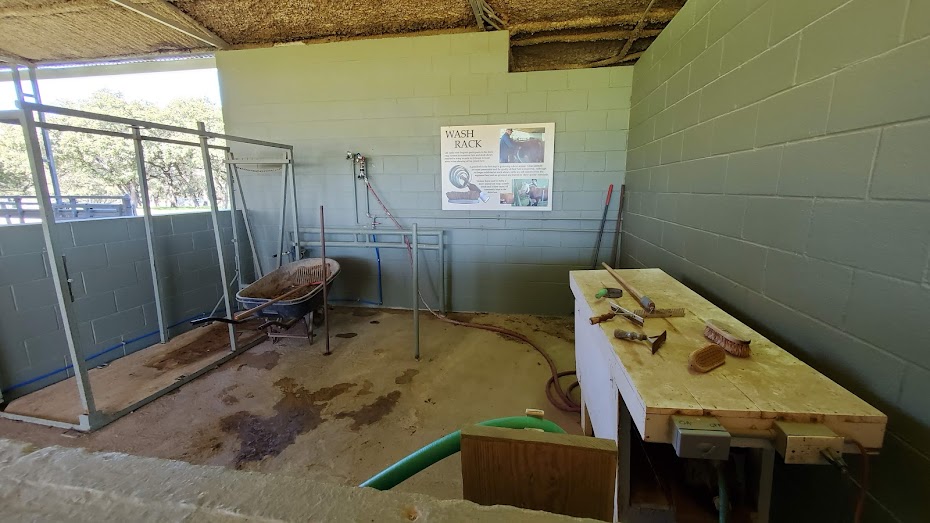 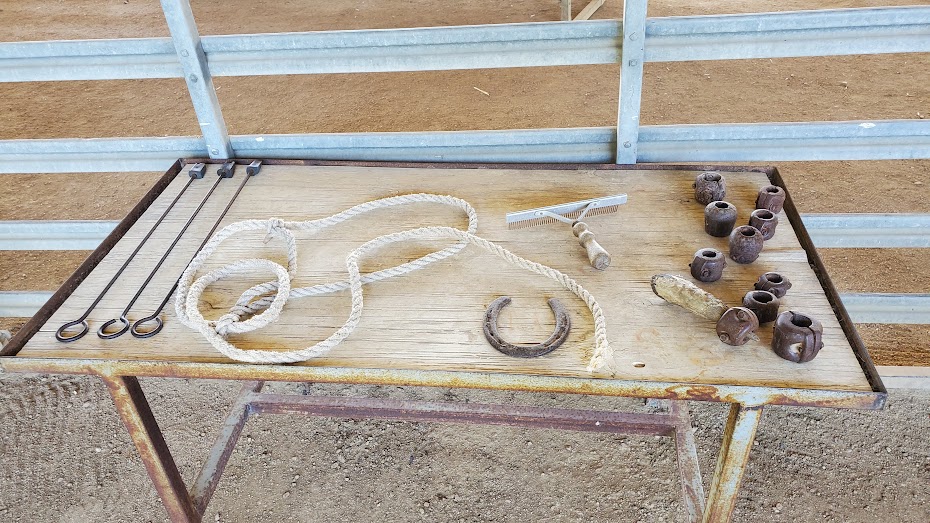 Here’s an interesting fact that we learned – Hereford cattle ranchers use horn weights to train the horns to grow downward, making it easier to load cattle onto trucks or herd them through narrow passageways. 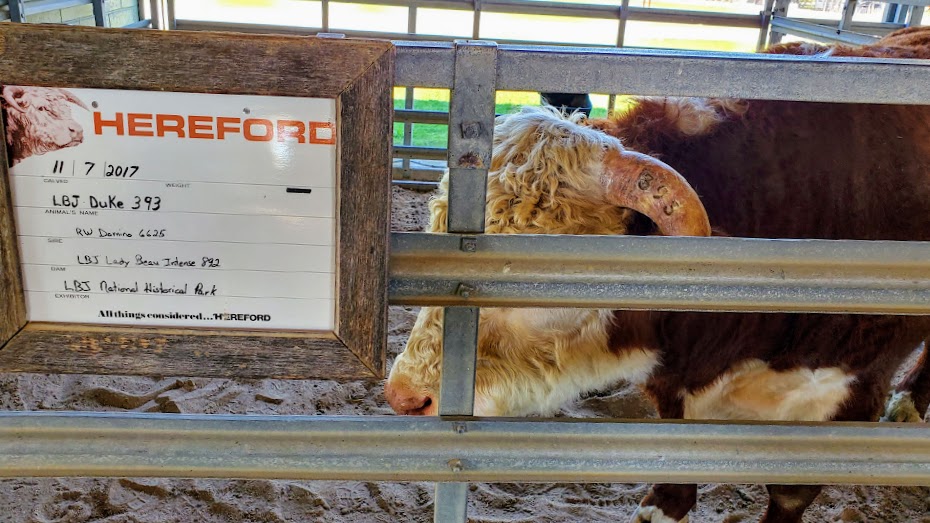 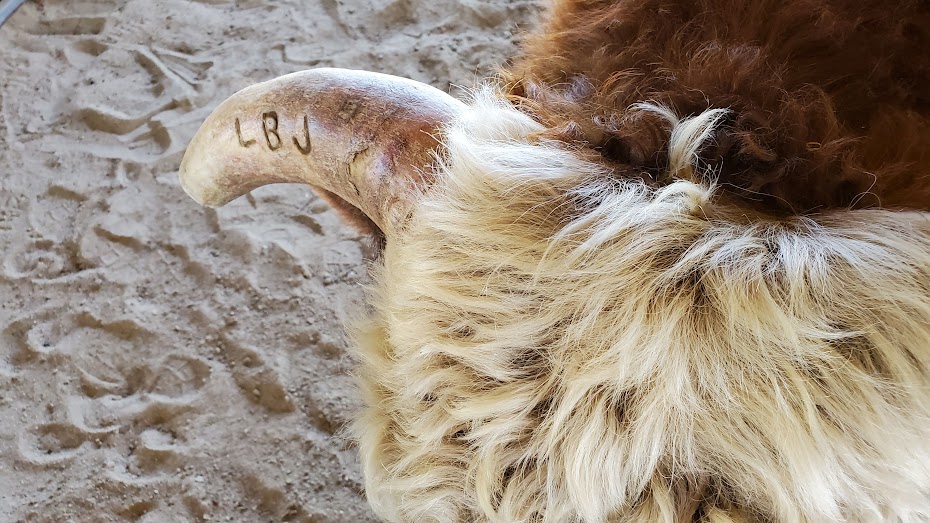 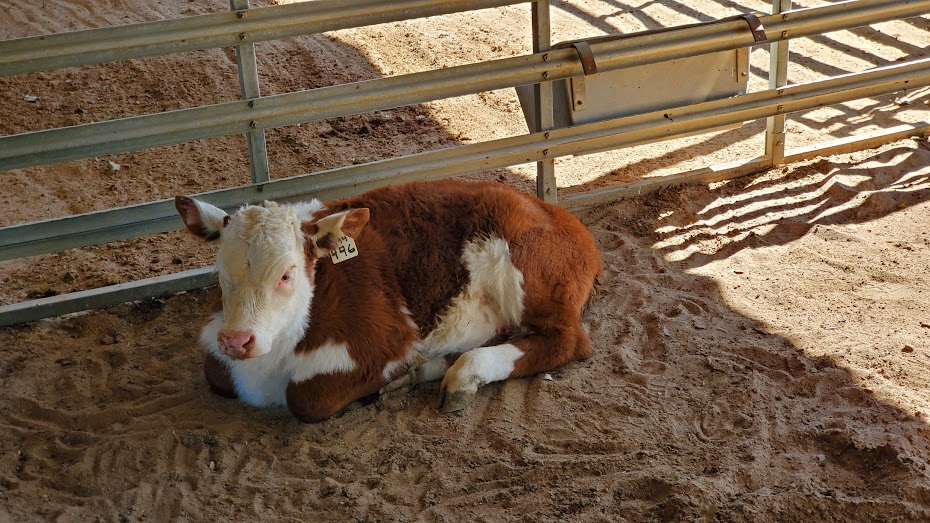 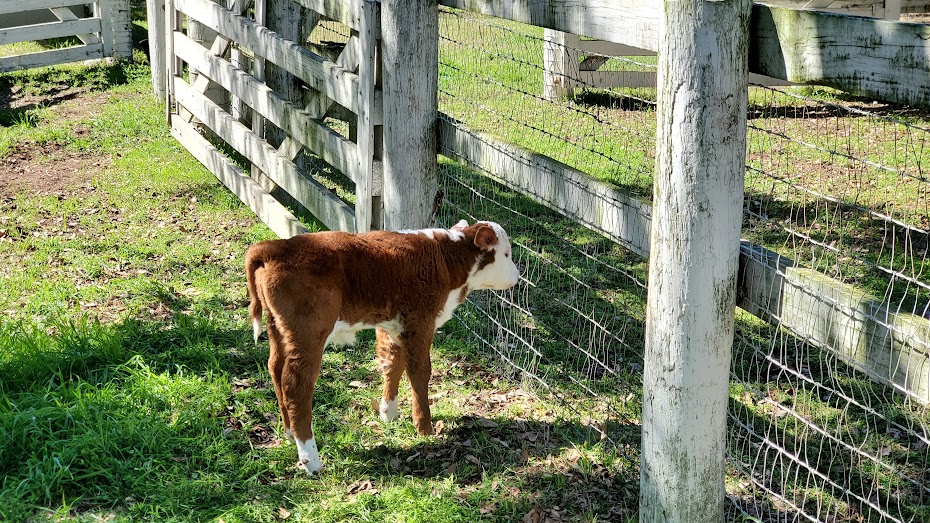 Leaving the Show Barn, we headed to our next stop, which turned out to be even more interesting. Stay tuned!