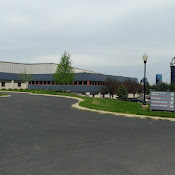 It was another early day on Tuesday since we wanted to attend the pancake breakfast at 7:00 a.m.  hosted by Entegra customer service. After checking out of Das Essenhaus, we drove the 5 minutes to Entegra, arriving promptly at 7:00 a.m.  As we entered the building, we were directed to a small kitchen area in the back of the building.

I guess the 7:00 a.m. time was not cast in concrete because just as we arrived everyone at their rather small counter stood up and left.  Hmmm…was it something that we said?  We had both taken showers that morning so it couldn’t be because we smelled funny – or was it?

It turned out they had all arrived earlier and were just finishing up. This actually worked out well because it freed up seats at the counter so we could sit down to eat. Jacob, the Customer Service rep, was the master chef deftly whipping up pancakes, eggs, hash browns, and toast while Joyce Skinner, the Director of Customer Service, was serving coffee and orange juice.  While we were eating we met Don Brubaker and several other employees.

Following breakfast, we were led to a conference room for a Q&A session where we met two other couples who were also there for service.  PJ led the Q & A which was pretty informative especially listening to the other couple’s experiences.

Interestingly several of the people we met here at Entegra were Tiffin converts and raved about Entegra’s customer service philosophy. We also learned that one of the couples, Linda and John, were leaving to join several other couples on June 3rd for a trip to Alaska.  Color me green with envy! The Q & A session lasted about 1-1/2 hours.  A lot of the discussion focused on potential improvements that Entegra could make to their coaches. After it was over, we said goodbye to Joyce, PJ and Jacob and the other couples.

My mother like so many other mothers in the world used to say that behind every dark cloud is a silver lining and that sure proved true with our Entegra experience.  As stated in a previous post, we were pretty disappointed that we had to return our brand new coach to the factory to fix a major system component.  We had heard and read about Entegra’s excellent Customer Service but it is one of those things you don’t really appreciate, or even fully believe, until you get to actually experience it. Well now we’ve been there and actually experienced it and now know how very, very true it is!  They sure practice what they preach! Very impressive!

Within the two year warranty, Entegra requests that their customers schedule a PDI (Post Delivery Inspection) where they bring their coach back to the factory to have it inspected and updated with any factory fixes and to address any customer determined issues – this is a week long affair.  Due to the rising volume of new coaches being sold, Entegra is so busy at the moment that customers have to schedule their PDI appointment 3 to 4  months in advance. More service bay accommodations are coming soon to help alleviate the backlog.

That brings up another silver lining for us – when we get our coach back, the majority of our minor punch list issues will have already been fixed.  Even better is that this wasn’t considered our PDI, so we will get to go back at some future date after we have had a chance to live aboard for a time.  In addition, we now have developed a relationship with many of the people there which will be helpful in case we have any other issues once we begin traveling.  We are now more confident than ever that we made the right decision purchasing our Entegra Aspire.

Finally it was time for us to depart in the van for our trip home.  We didn’t make any hotel reservations because we didn’t know what time we would leave so we figured we would just wing it.  We ended up driving 409 miles to Hamburg, NY where we stayed at a very nice, very clean, fairly new Holiday 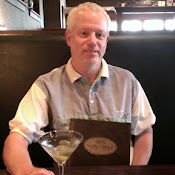 Inn Express.  After checking in, we jumped back in the van (huh? weren’t we sick of driving?) to take 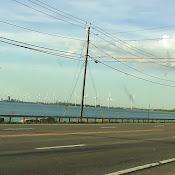 a short drive out to see the shoreline of Lake Erie.

We ended up eating dinner at the Waterstone Grill which was right next to the Holiday Inn.  $48 for a five course dinner for two including a bottle of wine! Excellent meal, wonderful ambiance, great service and all at a great price! Highly recommended!

After a decent complimentary breakfast at the Holiday Inn the next morning, Wednesday, we started out for the final leg 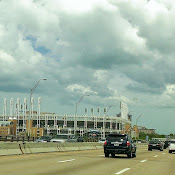 of our journey, another 470 miles. Interstate 90 is a great highway but boy, it is pretty boring – yours truly was once again nodding off for most of the ride home.

We arrived in Norton around 4:00 p.m. As we greeted our kitties and started to unpack things, we never thought that that night would be the start of a very tough few weeks.