Not leaving quite as rich as we hoped from our diamond digging experience at Crater of Diamonds State Park, we continued our journey. Since we had already been to both Hot Springs and Memphis (see Memphis Part 1 & Part II posts) on our way westward in October, 2016 and wrote a detailed posts about both, I’m not going to write extensively about our stay at either location but just present a few of the highlights.

Now you might be wondering why we were taking this route to head back to Rhode Island instead of heading due east from Lewisville, Texas through LA and AL. We had such a good time last year at Entegra’s Homecoming rally, we signed up for this year too. It’s from April 19th – April 22nd at the Elkhart Fairgrounds in Goshen, IN (more about that in a later post). That would be followed by an appointment at Spartan on April 24th, then a service appointment at Entegra on May 2nd.

Anyway, we so enjoyed our first 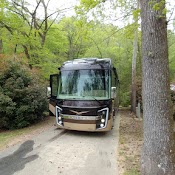 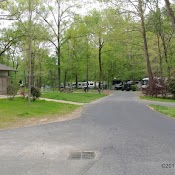 we were excited to have an opportunity for a return visit. This time, however, instead of staying at the more expensive Catherine’s Landing Resort ($42 – $63), we decided to take a chance (it’s first come, first serve) and stay at the relatively small (only 44 sites) full hookup Gulpha Gorge National Park Campground ($30 per night but $15 with an America the Beautiful Pass). We figured if no sites were available, Catherine’s Landing would be our back up plan.

We were pleasantly surprised at how pretty the park was! And even more surprised when we arrived late morning on a Monday that there were a few sites long enough for our big rig available. And even better yet one of the 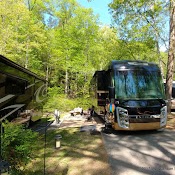 available longer sites (#27) backed up to the Gulpha Creek. Our friends, Andy and George (and their chihuahua, Elizabeth Taylor), joined us the next day but they weren’t quite as lucky. There weren’t as many sites available, but with a little maneuvering and by overhanging the pavement in the rear, they were able to squeeze their 45′ rig into what was designated as a 32′ riverfront site. The only downside was that they had to park their toad in a nearby 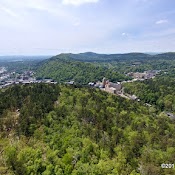 auto sized parking space. One other rare perk at this park is free firewood! Yep, wood is stacked and provided for anyone who wants to use it, the only stipulation being that it is not removed from the park.

During our stay, we revisited a few of our favorite spots, walked along Central Ave, drove to the summit of West Mountain and along Hot Springs Mountain Drive, stopping once again at the 216 foot high Hot Springs Mountain Tower. Yes, we had been here in October but the outside observation deck on the top floor was closed because of swarming wasps. Not so this time! Although it was extremely windy and somewhat cloudy, the view was awesome! Much better than looking through hazy Plexiglas like we did on our first visit! 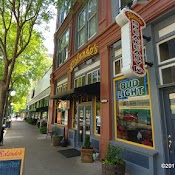 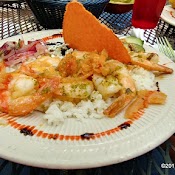 Last October we had a delicious lunch at Rolando’s Nuevo Latino Restaurante so a return visit was a must, inviting George and Andy to join us. At the recommendation of our waitress,  Camarones Al Mojo which was shrimp sautéed in a wine sauce with tomatoes, red onions, celery and garlic and served over rice with black beans and cheese was my choice while Rob had Pollo Chuchaqui, chicken tenderloins marinated in a Cuban mojo, sautéed in a lime and wine sauce with roma tomatoes, onions, and celery. Both of our meals were excellent! 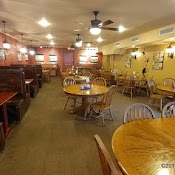 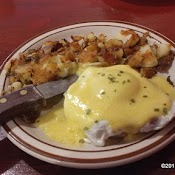 Not sure how we missed this diner last time, but located about 5 miles from the Gulpha Gorge campground was Megan’s Diner, which serves breakfast all day and has a breakfast buffet on weekends. Cute place! I had a one egg benedict ($5.99) and Rob had their made from scratch Corned Beef Hash ($8.95). Both were excellent! Definitely worth a return visit if we are ever in the area again. 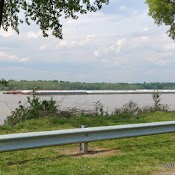 After our three night stay in Hot Springs, it was time to move on to another familiar place, Tom Sawyer RV Park in West Memphis, AR, just across the Mississippi River from Memphis, TN where we so 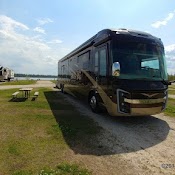 enjoyed watching the barges go up and down the river at all hours of the day last October. Unfortunately, when we checked in we found out there was a problem with the site that was originally assigned to us when we made the reservation, so they had to move us to a different site (#44) in a different section of the park. In this section, the utility poles were placed to accommodate 5th wheels, not motorhomes. So instead of our windshield facing the river, we faced away from it, 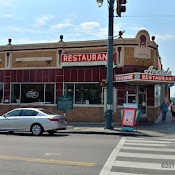 towards a retaining pond – no barges there! Although we were disappointed not to have a view of the river, it wasn’t a big deal as it was just a short walk to the river 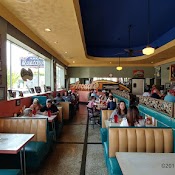 The Arcade Restaurant, founded in 1919 by Speros Zepatos, has the honor of being Memphis’ oldest restaurant so the day after we arrived we headed there for breakfast. Not only is it noted for its food but it has gained notoriety for the many films (Mystery Train, Great Balls of Fire, The Client, The Firm, 21 Grams, Elizabethtown, Walk the Line, and My Blueberry Nights), just to name a few, that have all been filmed in the restaurant. In addition to the film making industry, national 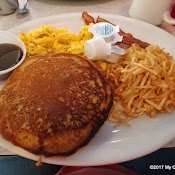 magazines such as Southern Living, Esquire, Travel, and Sports Illustrated  have featured articles on the restaurant. And The Food 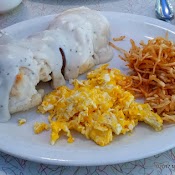 Network and The Travel Channel  have even done specials on the southern breakfasts offered at the Arcade.

Being such a popular place, it was no surprise that we had to wait to be seated. Interesting that at the desk, we were asked for our phone number – they would text us when our table was ready. Nice that we could take a walk outside while waiting. Once seated, I ordered the #5 Sweet Potato Pancakes with two eggs, bacon and hash browns ($9.95). Rob had #4 Eggs Redneck – biscuits and sausage smothered in gravy with eggs and hash browns ($9.95). We 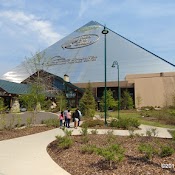 thought it was a little pricey especially since the food was just okay, nothing special. 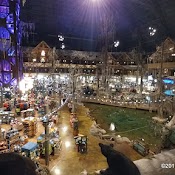 during our last stay in the area was the 321′ tall (32 stories) Pyramid, owned by Bass Pro Shops. If you’ve ever been to a Bass Pro Shop, you know that they are usually worth a visit even if you are not into fishing, boating, hunting, or camping. This particular one located in a former sports and entertainment arena re-opened in 2015.

The complex offers shopping, a hotel, two restaurants, a bowling alley and billiard room, a fitness 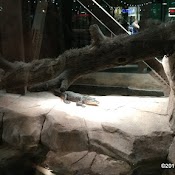 center, the tallest (28 story) freestanding elevator in the nation, the Ducks Unlimited Waterfowling Heritage Center and an archery range with an 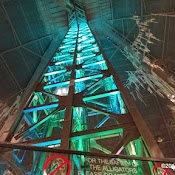 outdoor observation deck at its apex, ponds full of huge fish, an alligator pond and a duck aviary, it is a “megastore”. The $10 per person charge to ride the elevator to the tip of the pyramid seemed a little expensive to us, plus we had just been to the Hot Springs Tower so we decided to skip riding up to the observation platform.

Next we’ll be making our way to Goshen, Indiana!