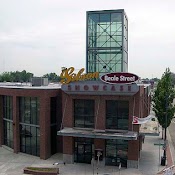 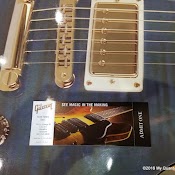 Continuing on with our sightseeing excursions in Memphis. Those of you who have followed us for awhile know that we love factory tours and Memphis offered one that appealed to us.

At Gibson Guitars, located a block away from Beale Street, you get to see the artistry and craftsmanship that goes into making some of their famous guitars. Mostly semi-hollow electric guitars are built here. Gibson Guitars has other factory locations in Nashville, TN (where they make solid body models such as the Les Paul and the SG) and Bozeman, MT (where they make acoustic guitars). Note that the Memphis facility is the only one that offers tours. 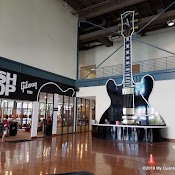 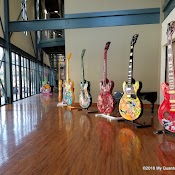 Depending on the time of year, reservations are recommended especially on a weekend. We didn’t make reservations in advance and had no problem getting tickets but we were there in late October. Parking is available behind the building and across the street for $5.00. No picture taking is allowed during the tour. However, I have included a few pictures below that came from Pinterest.

Although we could have taken the tour on Saturday which was our first day of sightseeing in Memphis, production is shut down on weekends, so we opted to wait until Monday so we could see the operation in action. 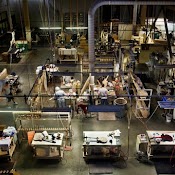 If you plan on taking the tour best to call ahead to check when the craftsmen will be working. I read that they take lunch at 11:00 a.m. so many of the craftsmen/women may not be at their workstations during the first tour of the day.

Whether you are a guitar aficionado or not (I’m not but Rob used to play guitar so he has more knowledge than I do), this tour was quite interesting. At this particular facility the skilled Luthiers (someone who builds or repairs string instruments generally consisting of a neck and a sound box) build Gibson semi-hollow body electric guitars. 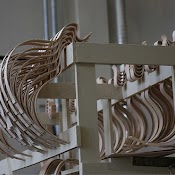 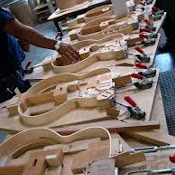 At the beginning of the tour, we were provided with protective, very attractive (ha, ha) eye wear which we were instructed to wear at all times. Our tour guide began by telling us the history of Gibson, then as we walked through the factory, he explained each of the steps required to build a guitar starting with the uncut bare wood to the process of binding, neck-fitting, painting, buffing, and tuning.

Definitely no automated mass production here – every single guitar is held in someone’s hands at every step along the way. Because most everything is done by hand, it is understandable that it takes about three weeks to make one guitar from start to finish. About 65 guitars are completed each day. We were surprised to learn when the tour stopped 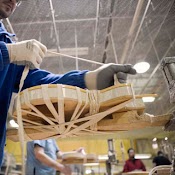 at the paint booth area that there was only one man who had the expertise to paint/stain some of the more advanced and artistic patterns. According to our guide, when he is sick or goes on vacation 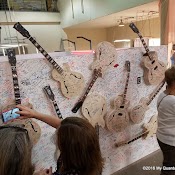 , production of some of those higher end models stops!

If you want to see a summary of the entire build process, check out this YouTube video. The only area where we could take pictures was towards the end of the tour when we were given markers and asked to sign their guitar wall.

The only downside to our tour was that 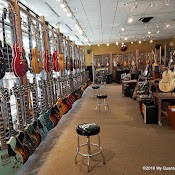 it was a large group, probably about 30 people, making it difficult to see everything while our guide was explaining a particular process. And as with most factory tours, it was noisy so it was sometimes hard to hear what our guide was saying. At a few stations, he did use a microphone but the rest of 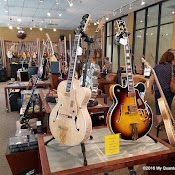 the time he just tried to talk loudly. Having individual headsets would have made the tour more enjoyable.

After the tour was over, we meandered into the gift shop. Wow, some real beauties were on display, some with beautiful inlays. Price tags ranged from $1000 to over $25,000. After seeing the craftsmanship required to build one of their guitars, we could appreciate the expensive price tag.

As mentioned in our previous post about Tupelo, we can’t seem to “get all shook up” over Elvis! 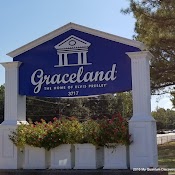 It’s not that we don’t like him or his music, we just have a more casual interest. But in this neck of the woods, it’s hard not to get caught up in all of the Elvis hoopla. Perhaps a visit to his iconic home was in order. After all, over 600,000 tourists visit Graceland each year, why shouldn’t we join the masses? It is the one of the most visited personal residences in the U.S. besides the White House.

Well, our intentions were good but the cost of the self-guided audio tours ranged from $38.75 per person (just the mansion) to $80 per person (VIP tour & airplanes tour). Ouch! Trip Advisor and other similar sites gives the tours mixed reviews. Perhaps it is worth it if you are a passionate Elvis fan but we just couldn’t muster enough enthusiasm to pay homage to the King by making a contribution to his estates $300 million annual income!

But even if we weren’t going to take the tour, we figured we could at least drive by, so off we went. Directed by the numerous signs to Graceland, we exited I-55 for US-51, Elvis Presley Boulevard. Guess we expected to be driving through some upscale neighborhoods but that wasn’t the case at all – the road to Graceland is not a pretty sight. From what I’ve read, the house was part of a 500 acre farm back when Presley purchased the home in 1957 for $102,500. My 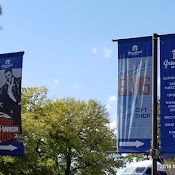 how times have changed the area!

Anyway, suddenly there were signs everywhere – we had arrived! On one side of the road was the Graceland Plaza where you can buy your tickets and catch a shuttle bus to take you across the street to the mansion. It is also where there is visitor parking, Elvis’ planes and the automobile museum. 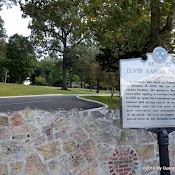 The Colonial Revival style mansion is set on a 13.8-acre estate which was named for the previous owner’s (Stephen C. Toof) daughter, Grace.  For people like us who just wanted to catch a glimpse of the iconic home, there is a free, curbside 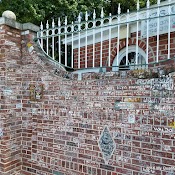 parking area. Tough to get a good view of the house because of a fairly high stone wall, plus the house is set back a good distance from the road. There is another “free admission” option at Graceland. Between 7:30 a.m. to 8:30 a.m. daily, guests can visit the Meditation Garden where the grave sites of Elvis and members of his family are located. Visitor walk-up times are daily from 7:30 a.m. – 8:30 a.m.

From the street, it looked pretty small and not at all what I expected even though I’ve seen pictures of it over the years. But at 17,552 square feet with a total of 23 rooms, including eight bedrooms and bathrooms, it certainly can’t be categorized as small at all. After hanging out for a bit, we finally said farewell to the King and headed back to the coach.

There was a lot in Memphis to see and do – the Memphis Rock ‘n’ Soul Museum, the Memphis Music Hall of Fame, the Blues Hall of Fame, Sun Studio, the National Civil Rights Museum and so much more. But we’ll save all that for some future visit. Heading back to Tom Sawyer campground and watching the barges on the Big Muddy seemed like a more appealing option after a busy day of touring. Our next stop will involve something wet and steamy, stay tuned!