Knowing that our plans for the next day included exploring the historic riverfront, our first order of business was finding a restaurant for breakfast near there. Fortunately we found a metered parking space near the Cotton Exchange where we waited for the trolley the day before. Savannah has made parking on the street very easy by offering ParkSavannah, a mobile payment parking app, which provides visitors with the convenience of handling their parking experience from their smartphone. No more running back to your vehicle to feed the meter to extend your time. Very cool! If you don’t want to pay for parking, there is free parking in Savannah. Check out this Where To Park For Free website for more information. 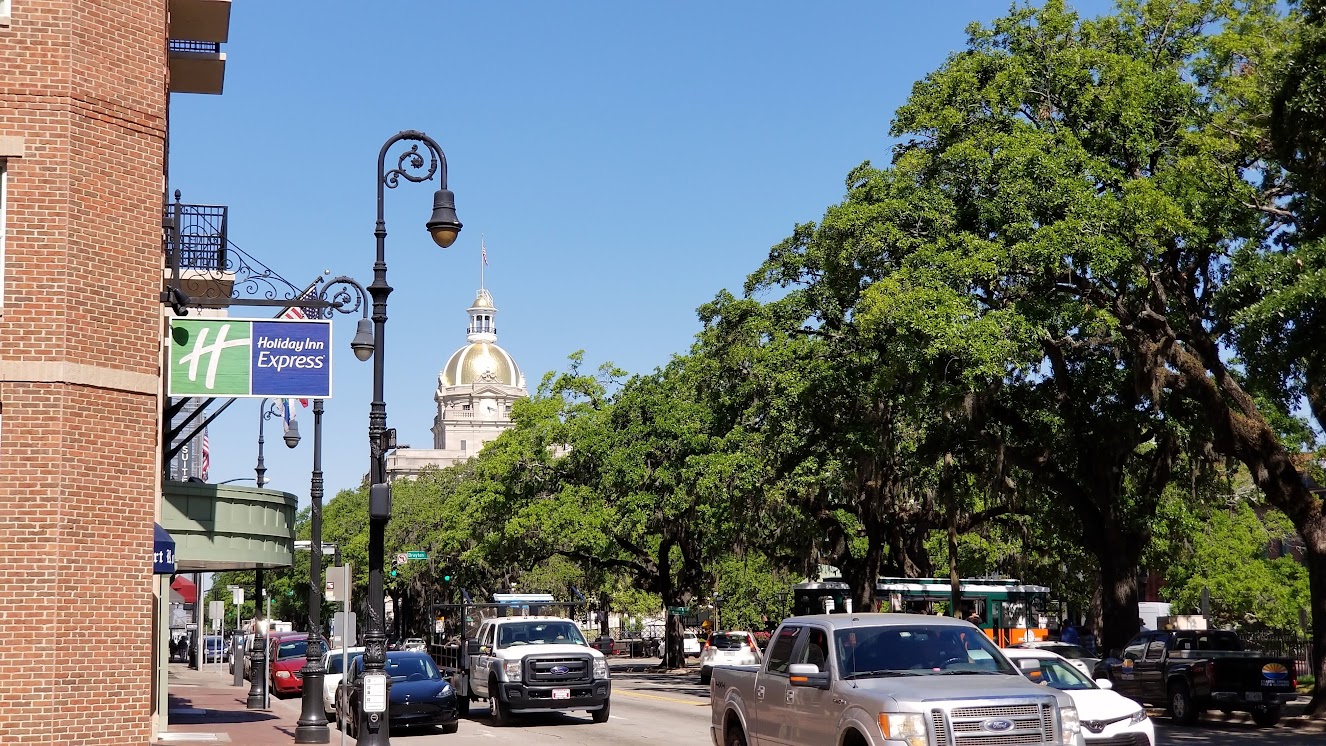 When we arrived, it was neat seeing a huge cargo tanker float on by. Pretty awesome seeing this modern day gargantuan ship framed by the historic red brick buildings.

We walked a few blocks to Henrys Restaurant where we had a very decent, relatively inexpensive breakfast ($5.25 for 2 eggs, meat, grits, toast). Highly recommended for best value in downtown Savannah. 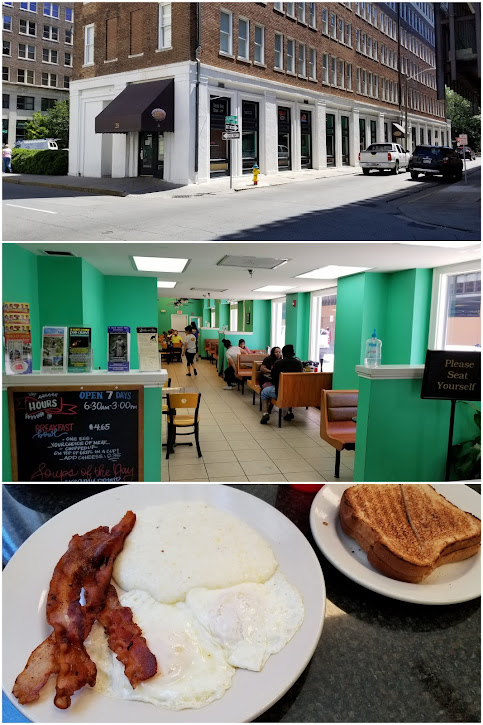 After breakfast, as we walked back towards River Street, we caught another glimpse of the Cotton Exchange completed in 1887, designed by nationally-known Boston architect, William Gibbons Preston (1844-1910). It is believed to be one of the few structures in the world erected over an existing public street.  At the time that it was built, the area was known as the “Wall Street of the South” because the revenue from cotton exceeded $40 million, making Georgia the leading cotton producer in the country and Savannah one of the major cotton seaports on the Atlantic. In its peak year in 1914, the Cotton Exchange moved 3 million bales of cotton. The building became obsolete by 1920 thanks to that little insect, the boll weevil. The last cotton office on the waterfront closed in 1956. 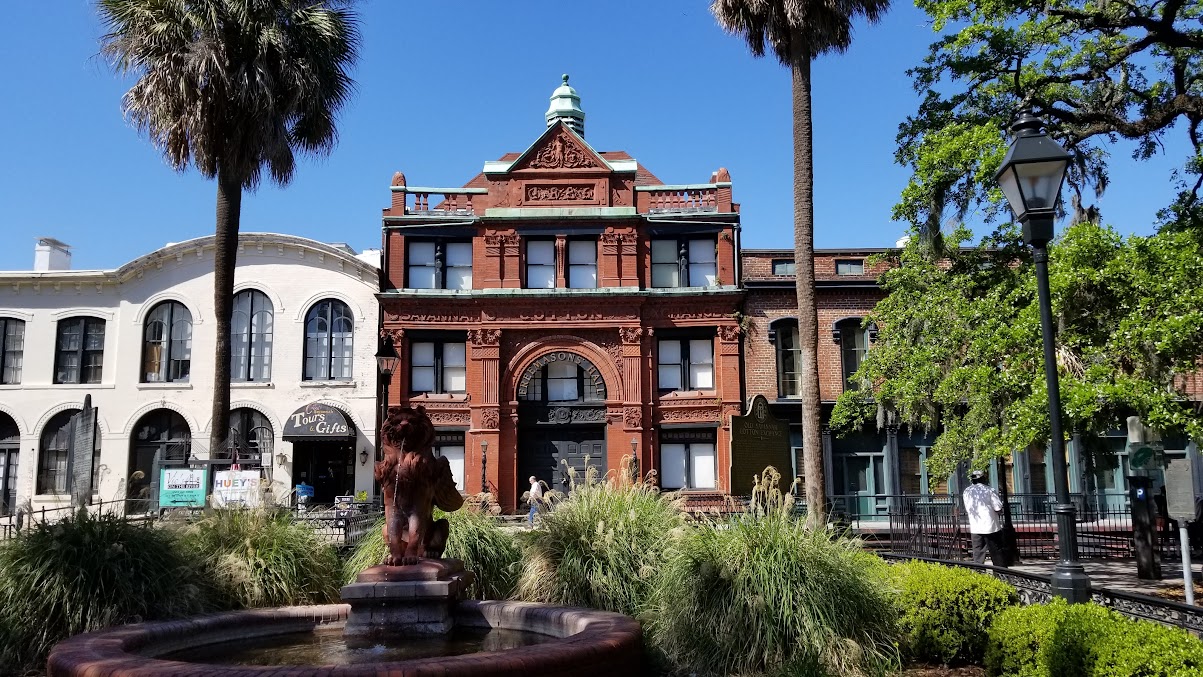 From there we continued our stroll towards what is known as the Factors Row which is located at bluff’s level behind River Street. The vast brick buildings which run from east to west above the river, rise two or three stories above the bluff and descend for three or more stories to the river front. Named in the 19th century, this area was where “factors” (also known as commission merchants or cotton brokers) set the price of cotton for the world. It was in these buildings on the top level of the four- or five-story cotton warehouses that men used to bale, factor and sell cotton and brokers worked with exporters and managed sales.

Factors Walk is a series of iron and concrete walkways that connect the buildings to the bluff allowing the brokers and factors to make their way from the waterfront warehouses to different places in the city to sell and buy cotton.

Two ramps (the Drayton ramp and the Abercorn ramp) lead from Bay Street down the bluff to River Street. These ramps are paved with cobblestones, brought onto shore by ship crews that had used them as ballast to stabilize their ships. When they sailed from port, they would abandon them on the riverbanks. Today the buildings have been converted into inns, pubs, restaurants and specialty shops. 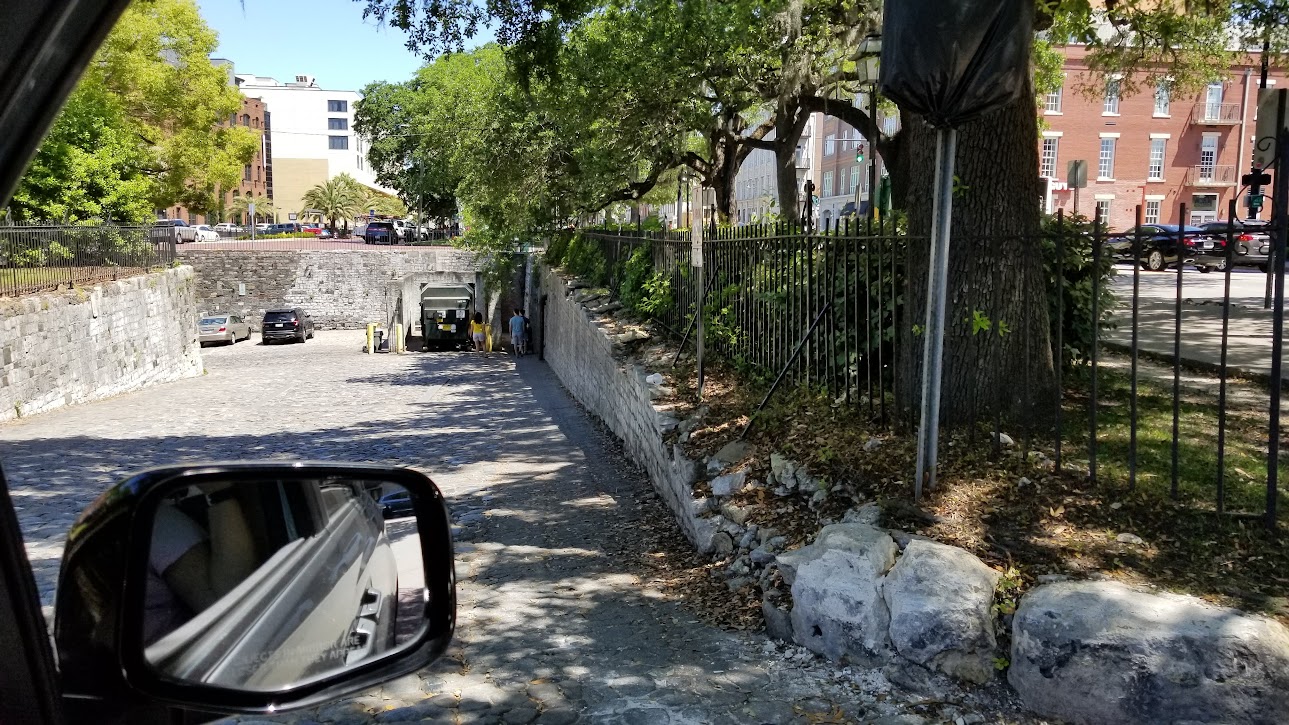 The Vietnam Veterans’ Memorial was pointed out to us during the Old Town Trolley Tour. Wanting to get a closer look we walked over from Factors Walk to nearby Emmet Park. This memorial commemorates the 106 members of the armed forces from Chatham County who were killed or presumed killed during the Vietnam War and the 25,000 other veterans of that conflict from coastal Georgia. Surrounded by a large reflecting pool is a marble base that lists the names of the Chatham County soldiers who were killed. A replica of the map of Vietnam sits in the center of the pool, while a bronze battlefield grave marker is mounted on top. 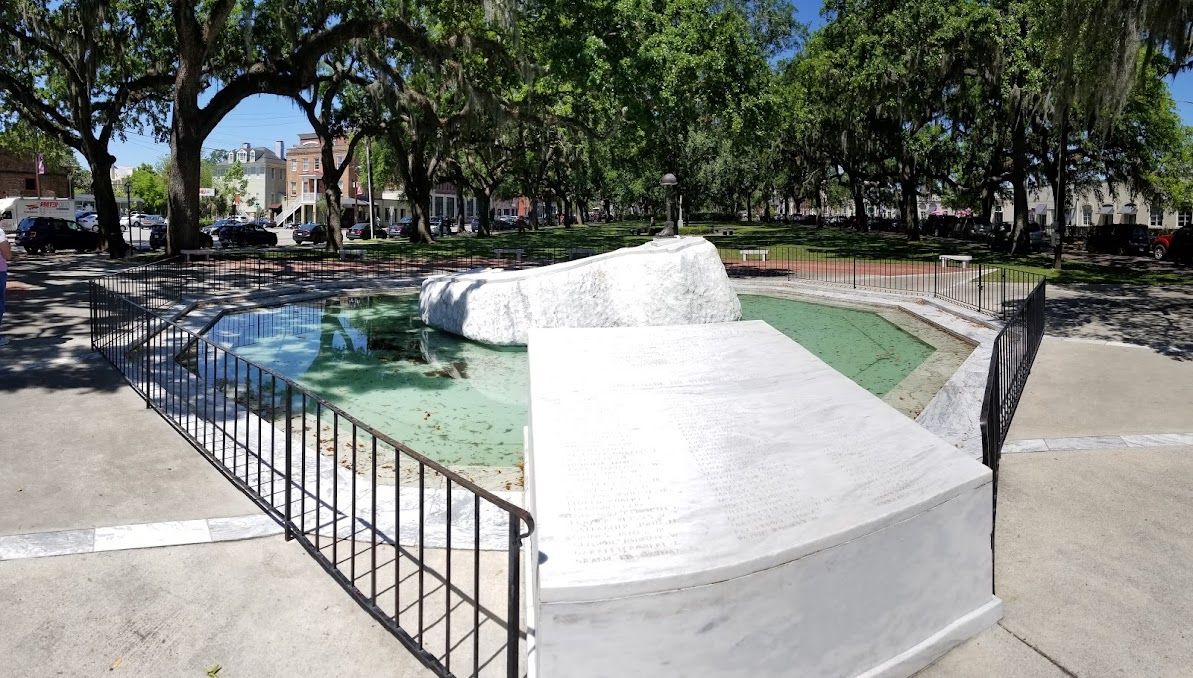 To get down to the River Street area we had to descend down one of the old, steep stairways. Each stairway had a Caution: Use At Your Own Risk sign. Gee, that’s reassuring! 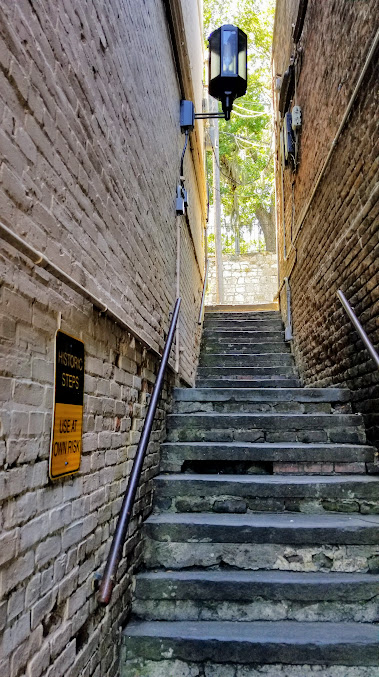 Seeing a tall mast, we immediately made our way to the river’s edge where we had a close up view of the Royal Huisman 157 foot yacht, the Hyperion, which was originally built for Jim Clark, the founder of Netscape. Looking for a new yacht? Not sure but this one might be up for sale! 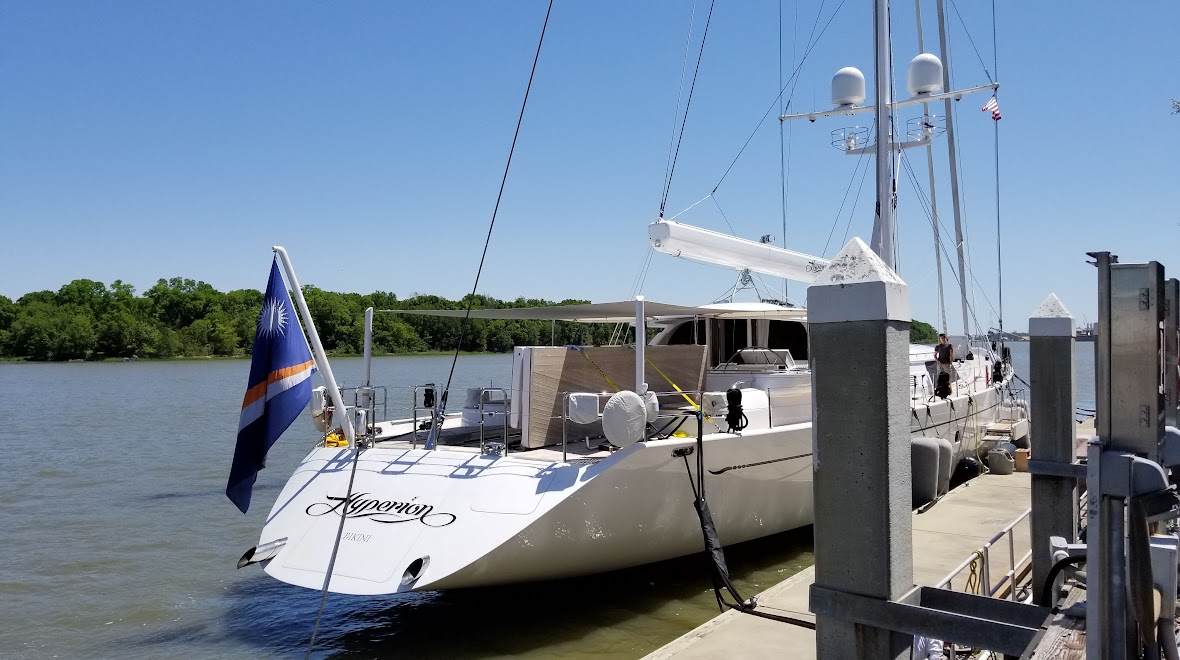 Knowing that the $15 million price tag was well out of our price range, we turned our attention to our stroll along the waterfront and the more than 75 souvenir shops, galleries, restaurants and pubs housed in the old cotton warehouses. 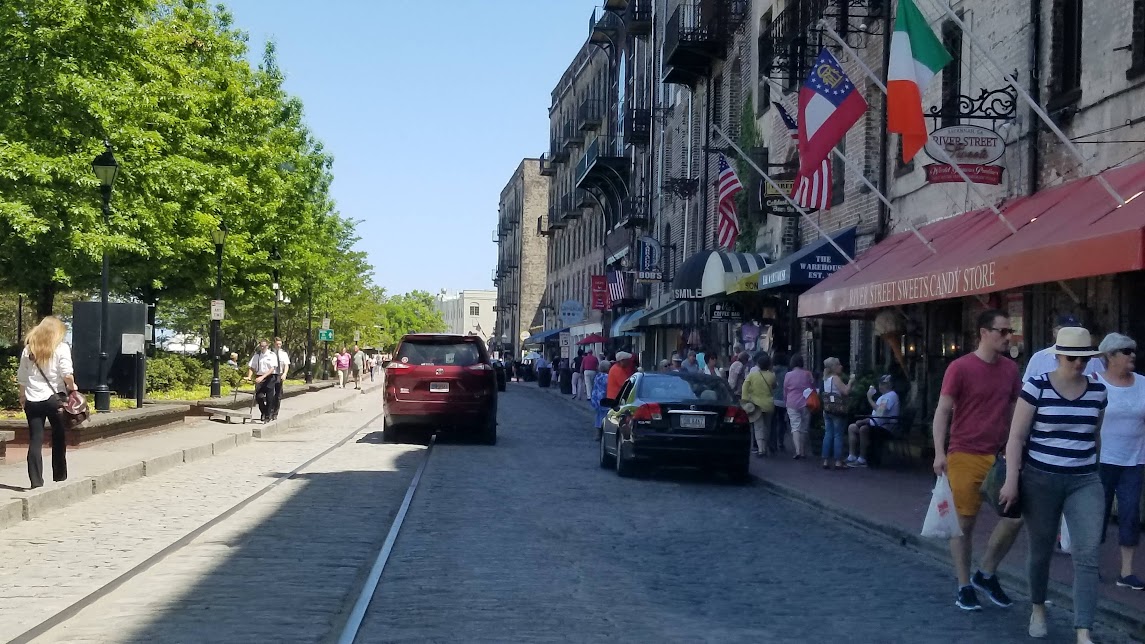 The first shop that sparked our interest was the Peanut Shop. Wow! We’ve never seen so many cans of peanuts in one place before! Honey mustard, wasabi, sea salt and cracked pepper, salt and vinegar, smokehouse barbecue, chocolate covered – you name it they had it. Or just get them plain, salted or unsalted! The best part was that they had samples of every kind. Yum! Good place to go for lunch. We thought we might buy some but didn’t want to carry them around all day so we left, figuring we would stop back later in the day. Unfortunately that never happened. 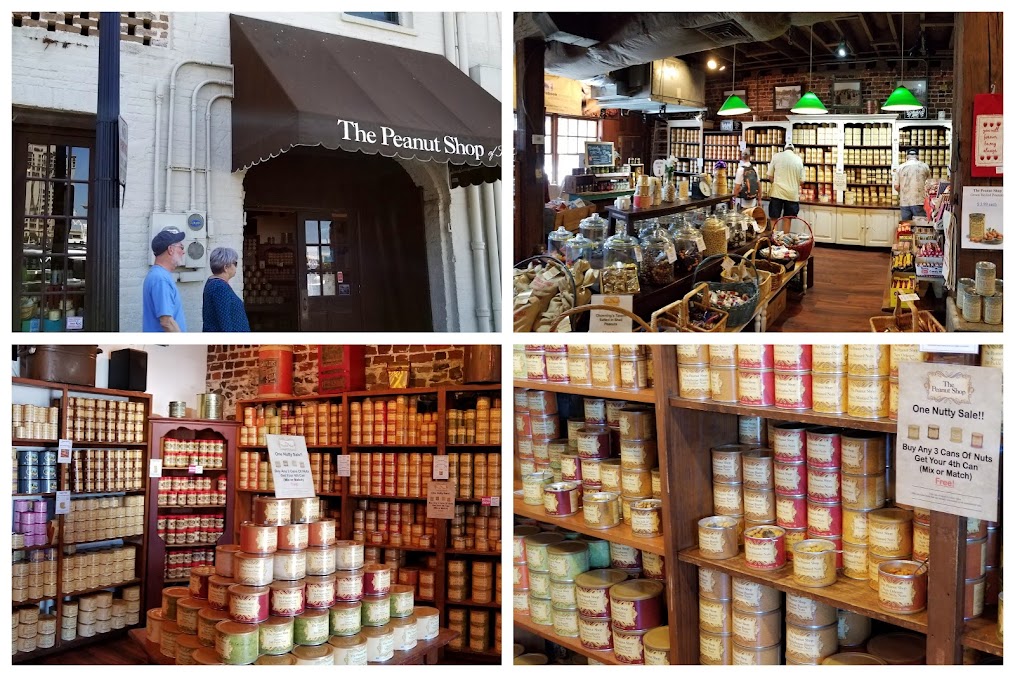 Seeing the beautiful riverboat docked alongside the walkway, the Georgia Queen, it was tempting to consider taking a 1-1/2 hour riverboat cruise on the river. But after spending $60 the day before for the trolley tour that temptation was quickly squashed when we saw the $25 per person price tag. Plus the reviews weren’t all that favorable. Sightseeing sure can get expensive!

Instead we decided that , er, free, was better! Let’s take the Savannah Belles Ferry which shuttles visitors from River Street, across the Savannah River, to Hutchinson Island with departures and arrivals every 15–20 minutes from 7:00 AM until 12 AM (subject to weather and river traffic conditions), 7 days a week, 362 days a year (closed Thanksgiving Day, Christmas & New Years Day)! It stops at three places – City Hall Landing on River Street, Waving Girl Landing at the Savannah Marriott Riverfront and Hutchinson Island at the Savannah International Trade & Convention Center and adjacent to the Westin Savannah Harbor Resort & Spa. And it’s free!

Speaking of free, the DOT also provides a free Express Shuttle stopping at 24 different locations around the historic district. Also, there used to be a River Street Streetcar but it seems that that service has been indefinitely suspended.

As we meandered along the riverfront towards City Hall Landing where we would catch the ferry, we stopped to read the many signs presenting information about the waterfront and its history. 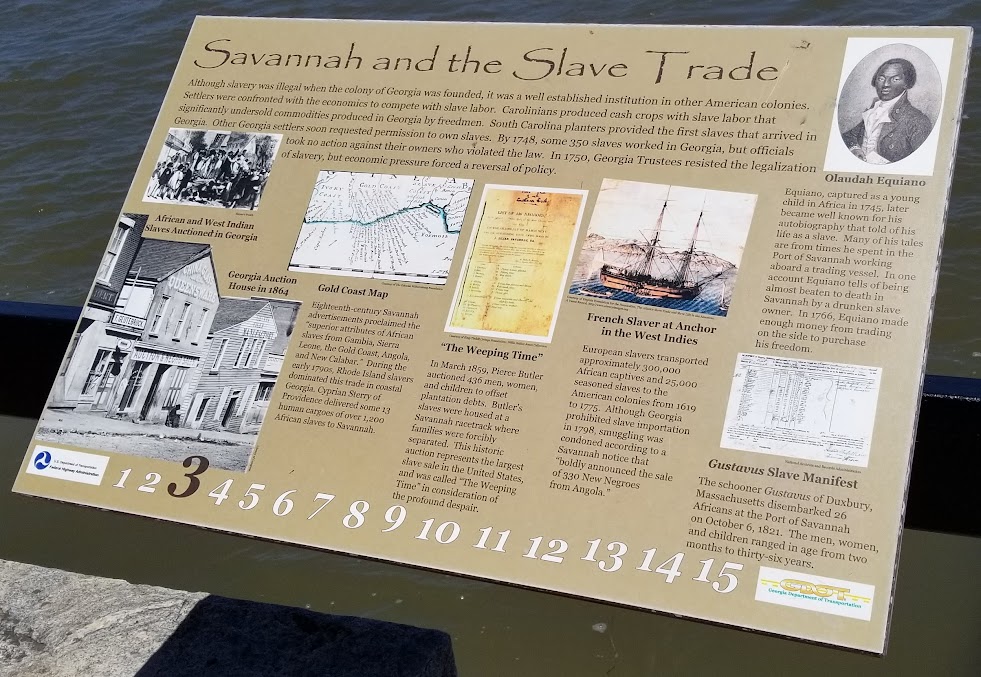 An inscription by Maya Angelou on a memorial statue of an African-American family erected in 2002 was quite moving:

We were stolen, sold and bought together from the African continent. We got on the slave ships together. We lay back to belly in the holds of the slave ships in each others excrement and urine together, sometimes died together, and our lifeless bodies thrown overboard together. Today, we are standing up together, with faith and even some joy. Finally the ferry arrived! Each ferry in service is named for noteworthy women in Savannah’s history – Juliette Gordon Lowe who founded the first Girl Scout Troop; Florence Martus, who was the unofficial greeter of ships into Savannah for 44 years; Mary Musgrove, a Native American, who served as an interpreter for General Oglethorpe during the founding of Savannah.

Our ferry was named Susie King Taylor who gained her freedom from slavery at the age 14 and later contributed to Civil War efforts by serving as a nurse to the black soldiers and by teaching them to read and write. She opened one of Savannah’s first schools for African-American children. 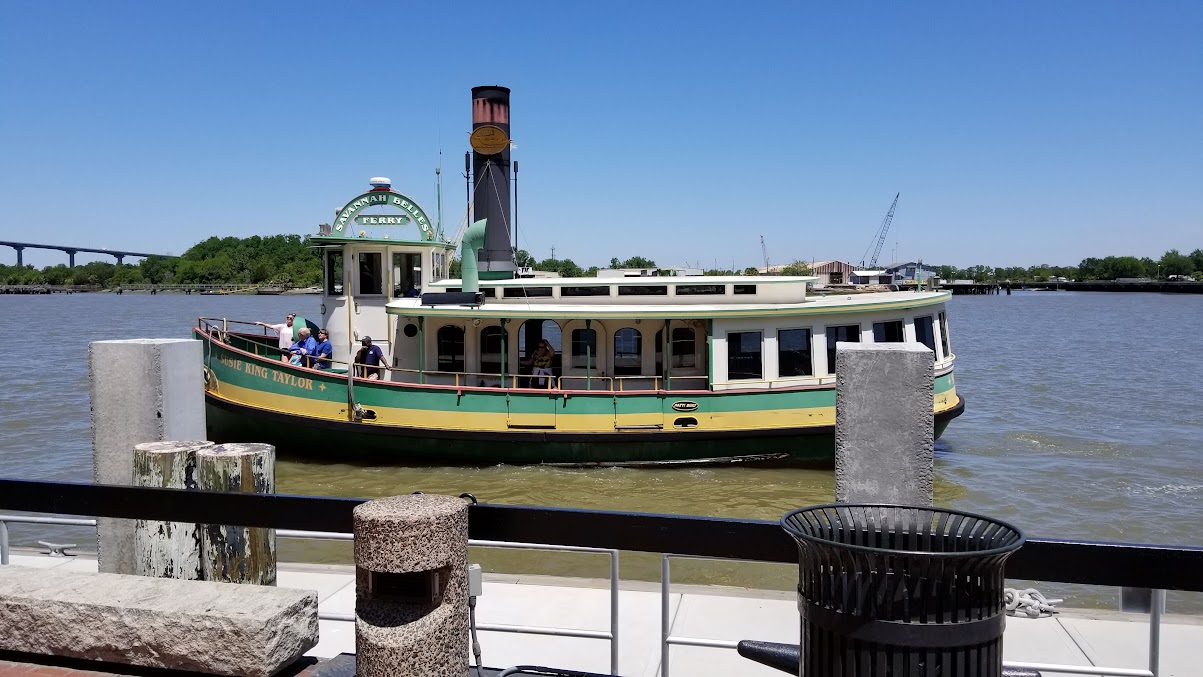 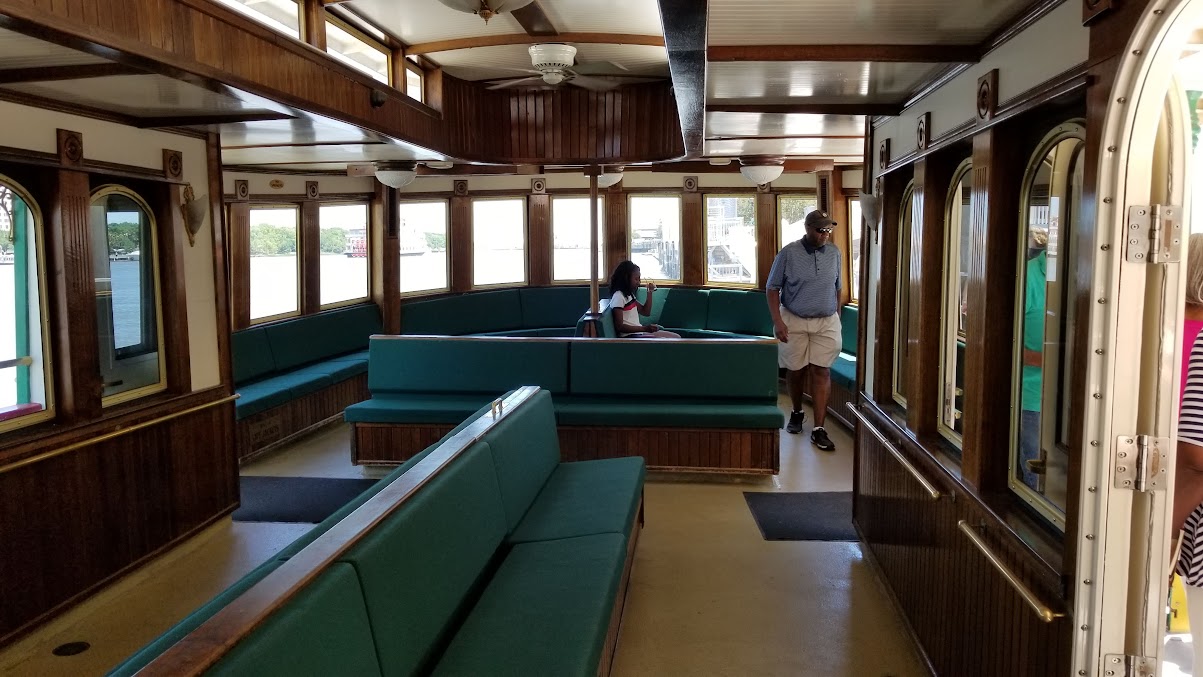 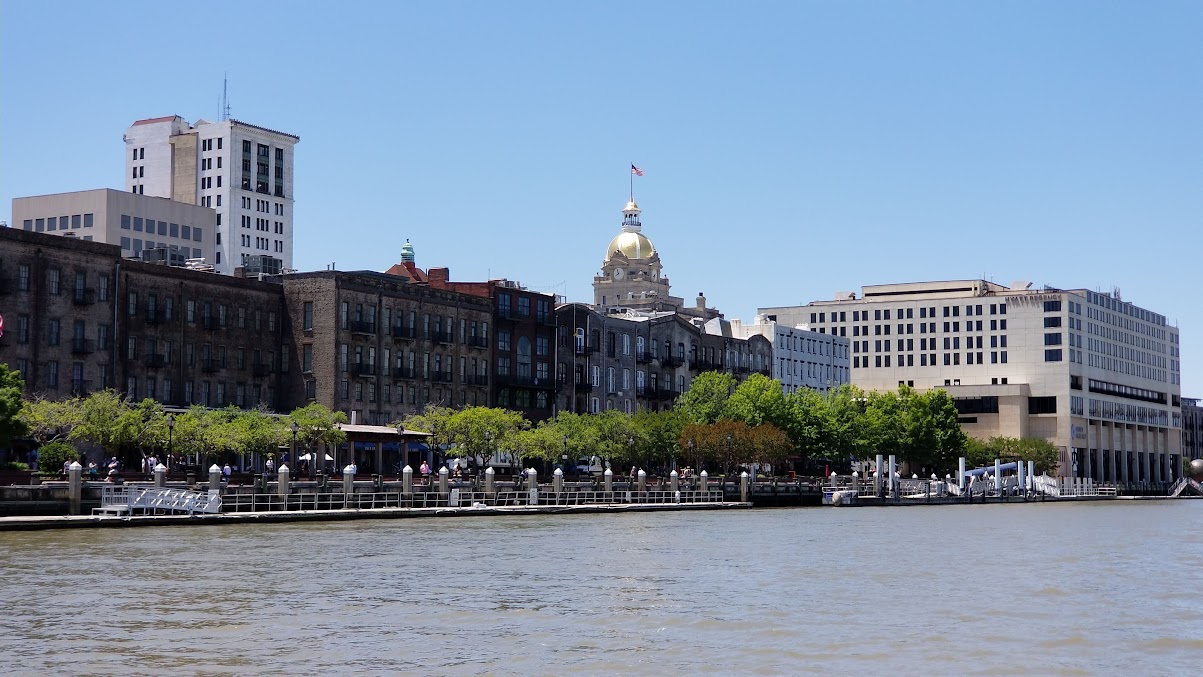 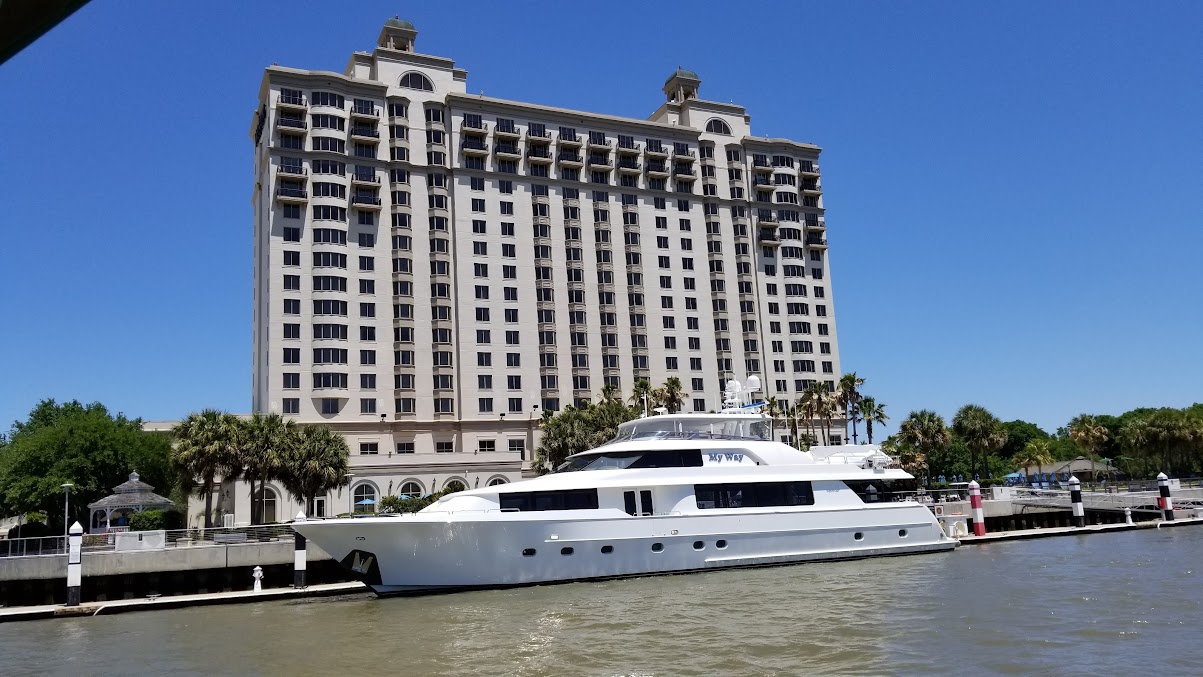 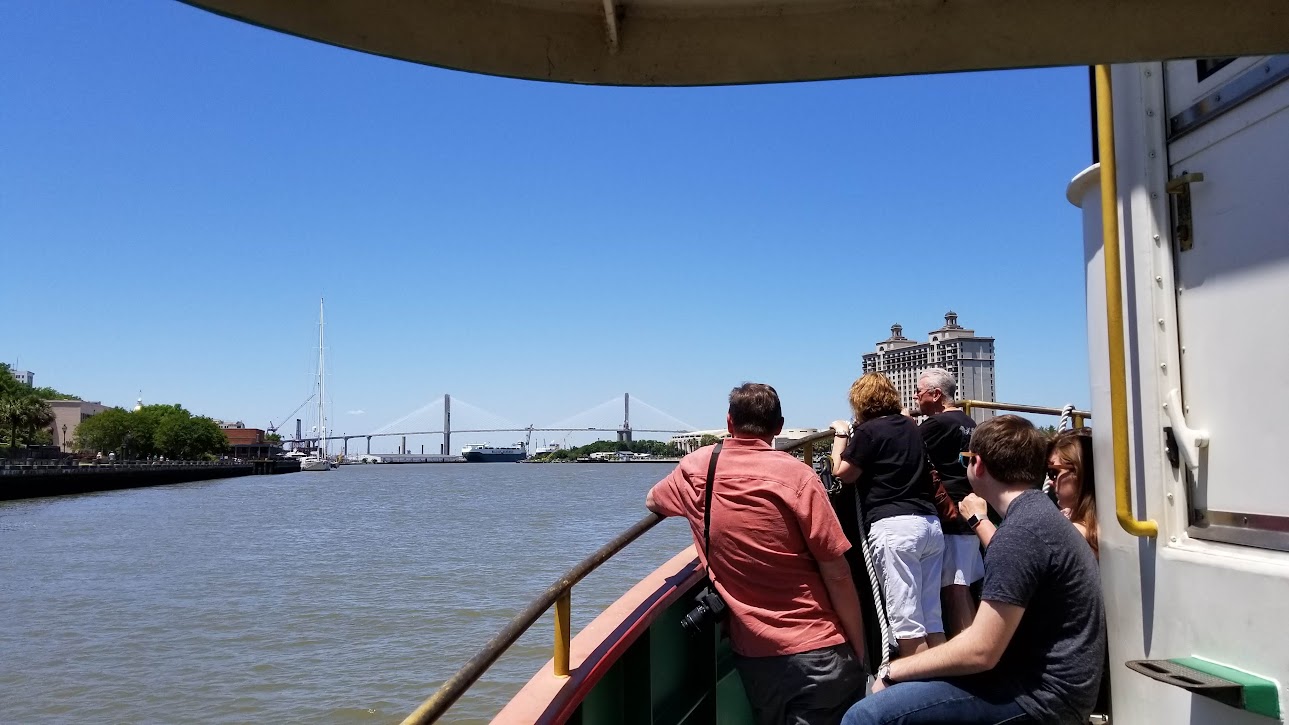 Even though there was no narrative and the ride was relatively short (about 40 minutes in total), it was a fun and cost effective way to see River Street and the city from the water.

Next to City Hall Landing on the west side of the Hyatt tunnel is the World War II monument also known as “The Cracked Earth” monument. Representing the conflict of a world divided, the two halves of the globe are split. Inside are all the names of those who served from Chatham county, a Purple Heart and a WWII Victory medal. 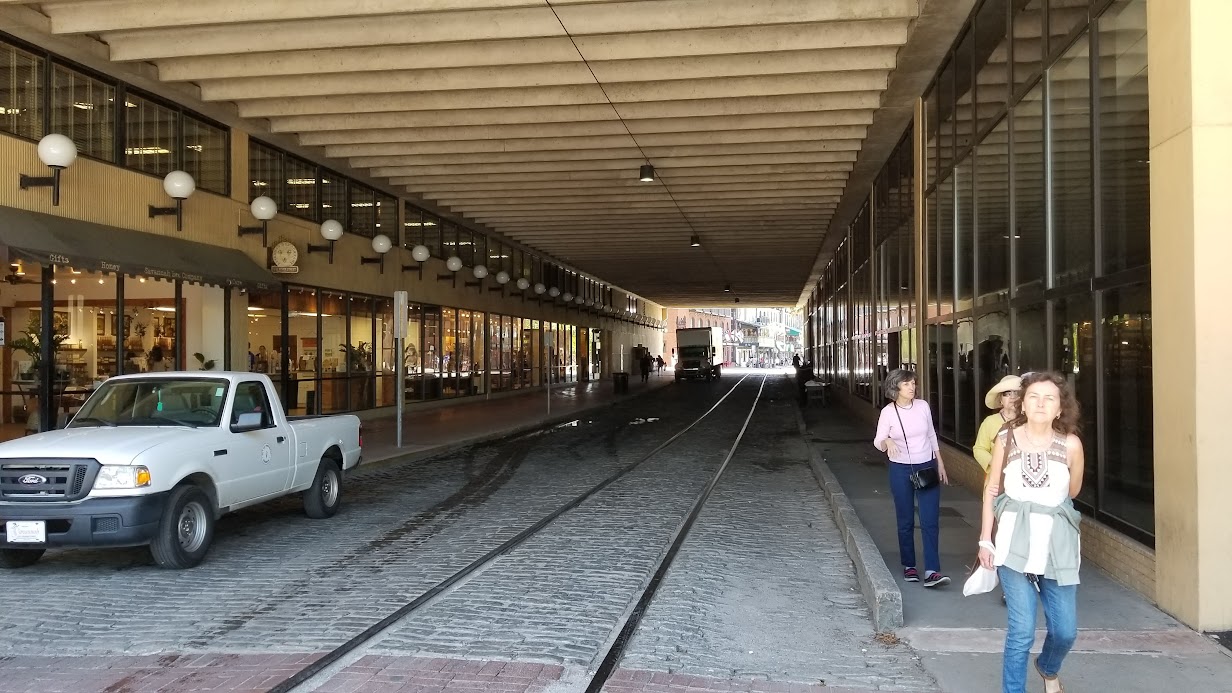 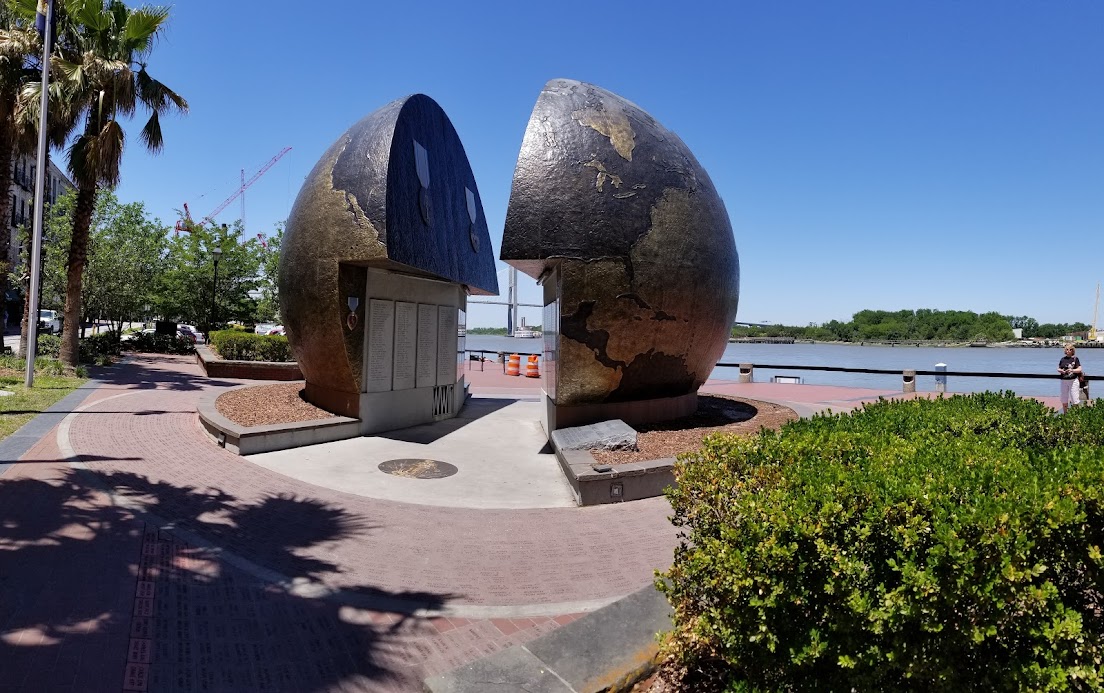 Except for the Peanut Shop, we hadn’t explored any of the other shops so we headed back along River Street. If kitschy shops selling cheap souvenirs and t-shirts are your thing then this is the place to go.

While there wasn’t much that interested us, we couldn’t resist the smell of chocolate and pralines coming from River Street Sweets! Enter the store and immediately gain 5 pounds just smelling the aromas and looking at all the goodies! They were giving out samples of their handmade pralines which were totally delicious but we managed to resist the temptation and didn’t buy any! 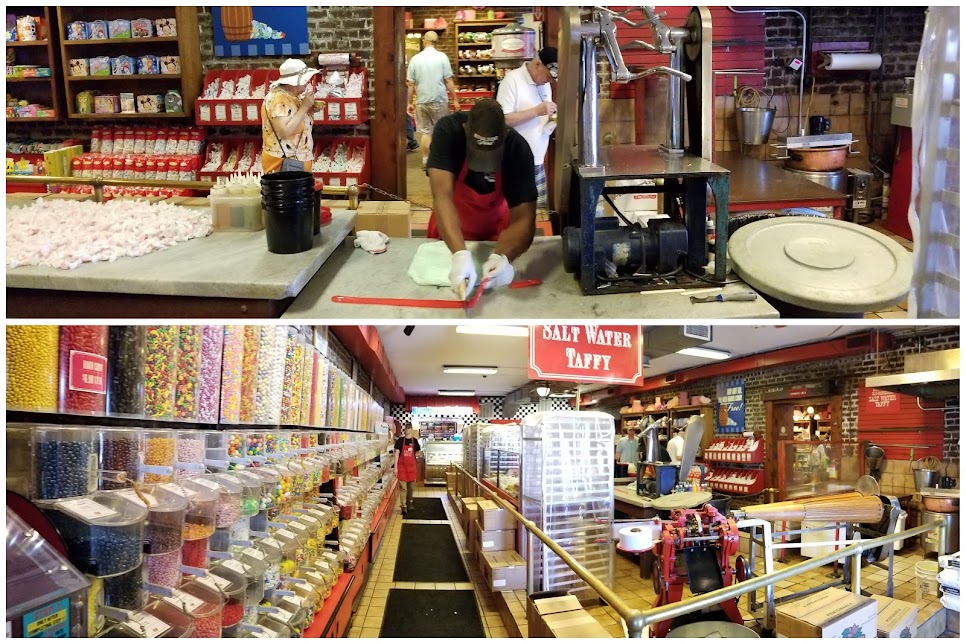 Once you’ve had a treat, it’s time to buy a treat for Fido at Woof Gang Bakery! 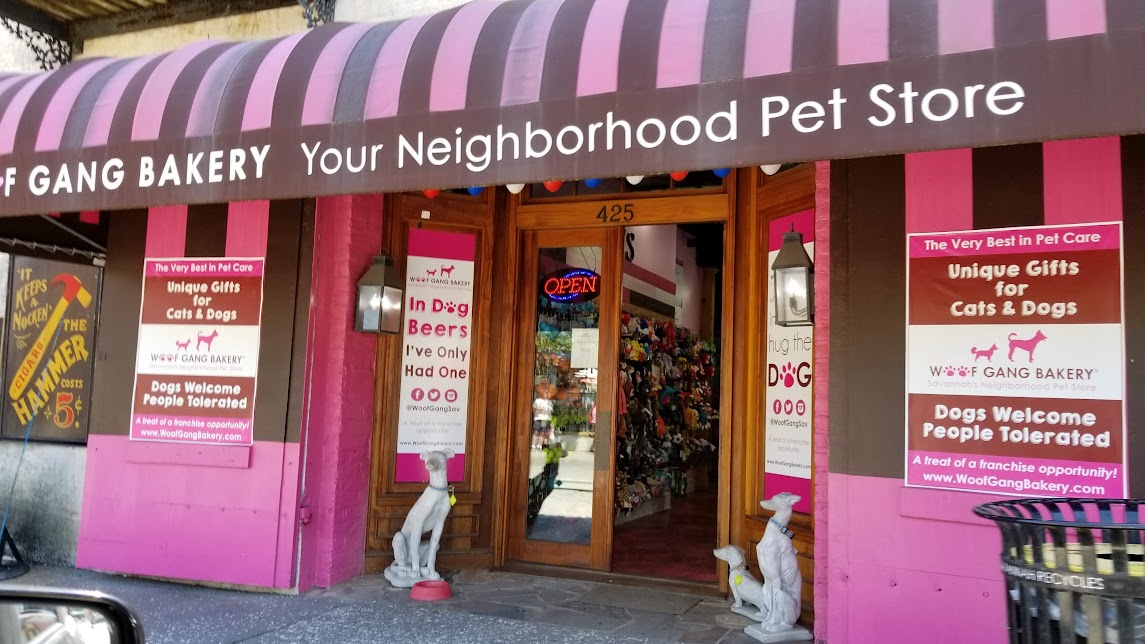 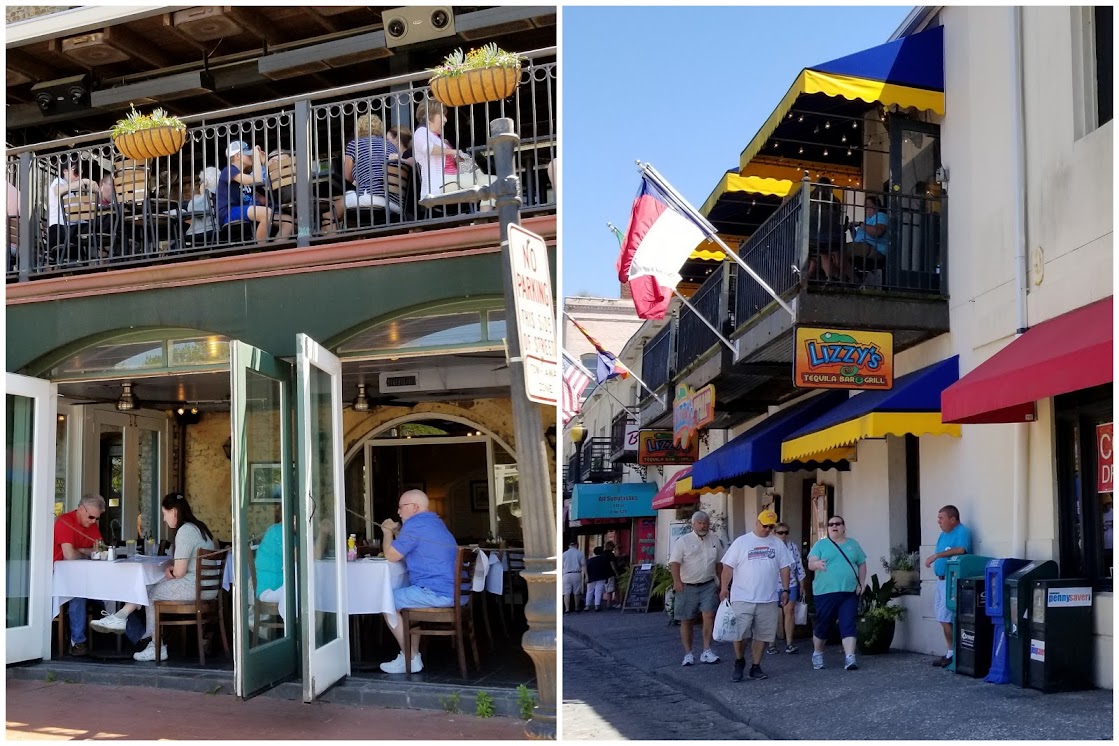 Check out this short drone video created by David Bott of Outside Our Bubble (a blog site that we follow) – it will give you a good sense of what the River Street area is like.

By the time we returned to where the car was parked, we were pretty tired and it was getting late. Knowing that I wouldn’t feel in the mood for meal prep that evening, we needed to figure out our dinner plans before heading out of the city.

Several times we had passed Zunzi’s Take Out and Catering, always with a long line hanging out the door with just a few picnic tables outside. Time to research! Hmmm, this sounded promising! USA Today named their Conquistador sandwich “one of top three sandwiches in America” and Zagat’s said “Prepare to wait” to score one of the “impossibly large and messy” sandwiches served up at this Historic District “gem”, a “hole-in-the-wall” where there’s often a line for the Eclectic assortment of eats that springs from the owners’ Swiss, Italian, South African and Dutch backgrounds.

After checking out the menu and seeing that they had online ordering, we decided to give it a try. Online orders can be picked up through a side door near the picnic tables, no need to wait in line at the main counter. We ordered two sandwiches (note you can completely customize your order online). The Conquistador ($11.99) was French Bread, Chicken, Romaine Lettuce, Tomato, Shit Yeah Sauce and Zunzi’s Dressing and the Godfather ($12.99) was French Bread filled with Chicken, Smoked Sausage, Boerewors, Provolone, Romaine Lettuce, Tomato, Marinara, Parmesan, Shit Yeah Sauce and Zunzi’s Dressing. Note: both their Shit Yeah Sauce and their Dressing can be ordered online.

It was interesting that they don’t actually assemble the sandwich (for take out customers) as they don’t want it to get soggy so they pack everything in individual cups, then it was up to us to reassemble it. Boy were they tasty!  Although both were excellent, if we ever returned, probably the Godfather would be our first choice. 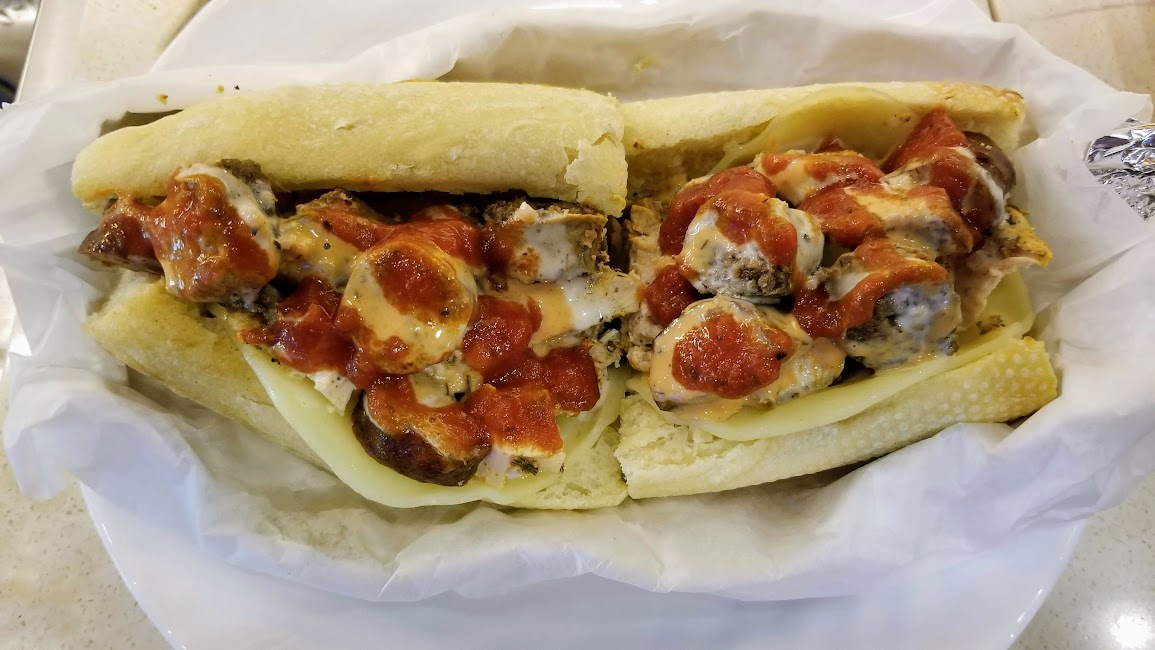 We had one more day to squeeze in more sightseeing before we would be leaving Savannah but that excursion would be away from the city, details about that in our next post.