C’mon down…that was the word we received on Thursday, October 11th, the day after hurricane Michael slammed into the Florida panhandle and the day before our scheduled departure from Texas T Campground. While the Panama City area was devastated, we were told that there had been no extensive damage to the west in Santa Rosa Beach including Topsail Hill Preserve State Park. They still needed the volunteers there even though the park would remain closed to the public for a period of time because Topsail would become a staging area for emergency crews.

Since we already had reservations for Friday and Saturday nights at our next destination, Gunter Hill Army Corps of Engineers (COE) campground located on the Catoma Creek outside of Montgomery, AL, we decided we would keep those plans and arrive at Topsail on Sunday. 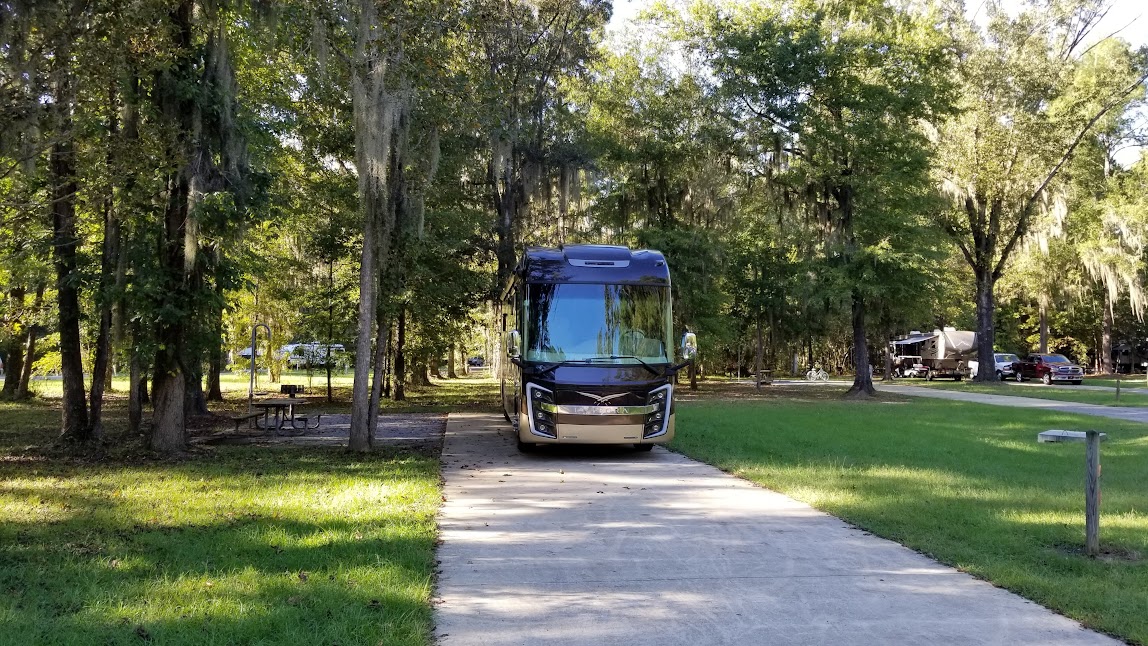 Glad we did! The campground at Gunter Hill was quite lovely with spacious sites, lots of room and privacy between us and our neighbors. Plus, out of the 142 sites, 75 had been newly renovated in the Catoma Loop and had full hookups. Full hookups are unusual at most COE parks. It would have been nice to visit some of the historic sites in Montgomery but it was a weekend and with only two days, we decided against a trip to the city. Instead we would relax and enjoy our surroundings at the campground.

Note: When departing Gunter Hill Catoma Loop (the best loop for big rigs) be aware as you approach the gatehouse there will be a very tight right turn that could be problematic for big rigs. Even though we had already hitched up the tow vehicle it wasn’t a problem for us in our 45′ rig because we were prepared for it and swung wide into the opposite lane before starting the turn. 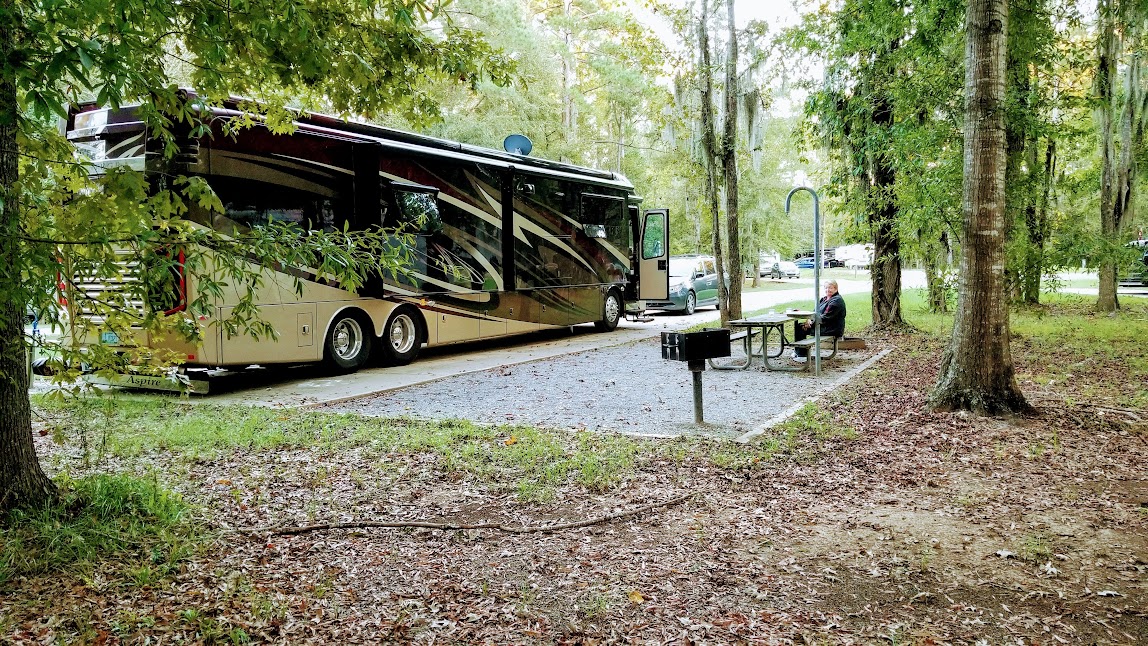 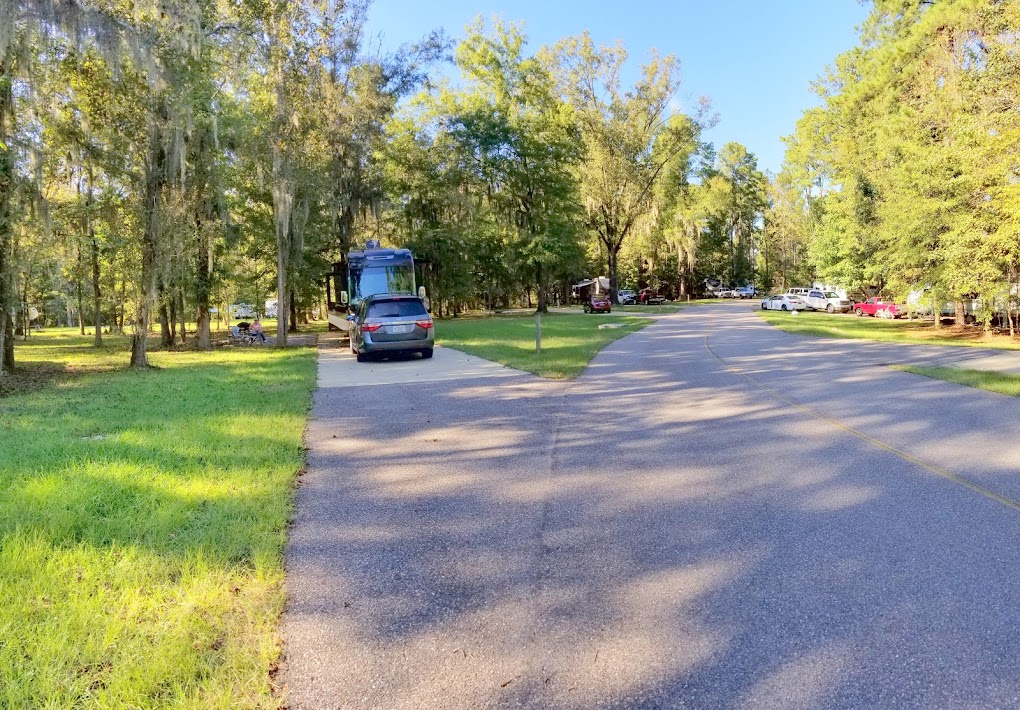 On Sunday, October 14th, we were off again headed for the gulf coast. From Gunter Hill we took Cantalou Road to US-80W to I-65S to AL-55S and US-331S. Shortly after we crossed over the Choctawhatchee Bay bridge we took a right on US Hwy 98W, then headed east on W County Hwy 30A to Topsail.

As we neared the inland areas of Choctawhatchee Bay we could see some minor debris along the side of the road especially in low lying areas, but other than that we didn’t see any other damage. 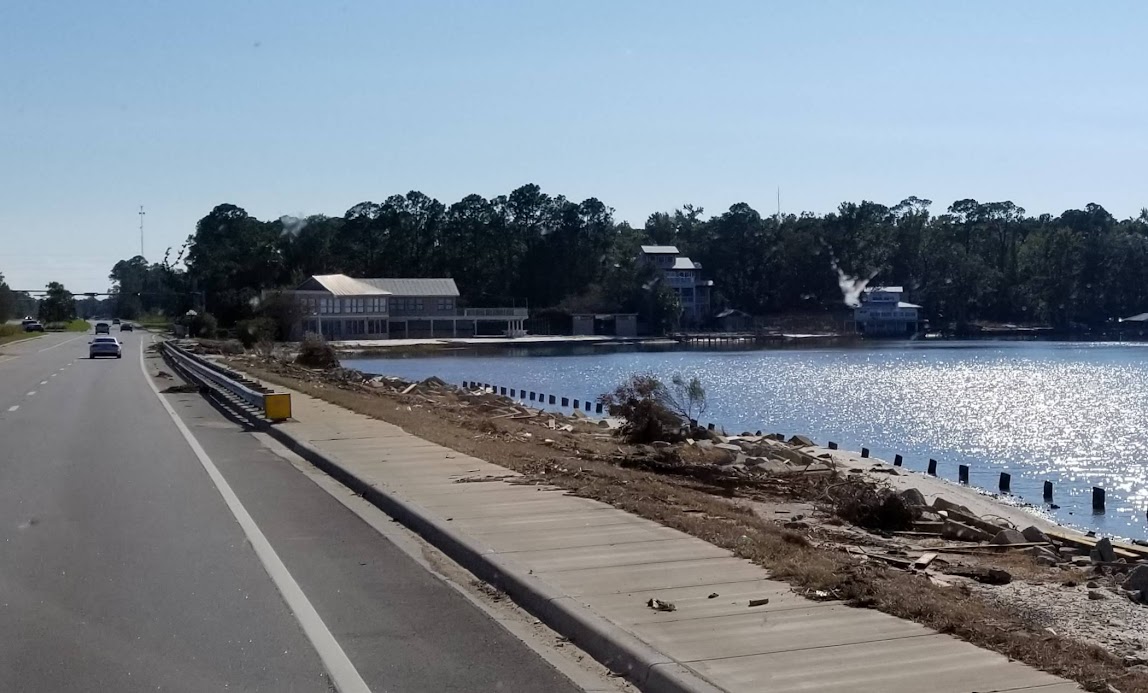 Arriving at Topsail around 3:30 p.m. CST, we had been told that the gate would be dummy locked but we would be able to open it once we arrived. Yes, the main wooden gate directly off of 30A was closed and could be easily unlatched and pushed opened but there was a second electronic gate that required a code for us to get in. Oh great! Now what? Would we have to spend the night at the entrance of the park?

No, thank goodness! Luckily there was a park ranger pressure washing the entrance station so we approached him. He was surprised to see us – apparently no one told him we would be arriving. Not an issue, he quickly gave us the gate code and a map showing us where our site was located.

Since Hallie, the ranger who hired us and is in charge of the Volunteer Program, wouldn’t be in until Tuesday, we would have plenty of time to settle in. Ranger Chris explained to us that because Santa Rosa Beach was the closest town to Panama City that still had utilities, internet access and gasoline, Topsail was being used as a base for FEMA, DEM, EPA and other first responders, many of whom were staying in the cabins and bungalows inside the park. During our conversation, he mentioned that the cabins and the campground would remain closed most likely until November 1st.

And speaking of gas, Chris warned that some of the local gas stations were out of gas due to the lack of availability in the areas hit by the hurricane. We had plenty of diesel in the coach but we needed gas in the van so as soon as we settled in, we headed out to the gas station just down the street. All of the pumps there had been shut down so we headed to the next closest station. Although it was pretty busy, they still had gas.

Having been here so many times before, it was kind of spooky with the park being virtually empty.

The next day we were given our volunteer bags which had a notebook full of information about the history of the park, the area, our specific job duties and our work schedules. So what exactly would we be doing until December 1st? More about that in our next post.