Work? Having a schedule? Filling out time sheets? Training? Egads, what were we thinking last spring when we signed up to volunteer? It’s certainly has been a very long time since we had to think about any of that. We were both victims of corporate downsizing, Rob in 2003 (he was self employed after that for several years) and me in 2006, so obviously it’s been a long time since we had someone else telling us what to do. For the past five years, all we have had to think about was what part of the country we wanted to explore, where did we want to stay and what attractions did we want to see. Ah, yes, it’s been a tough life!

We’ve heard a lot of favorable reports about volunteering (aka work-camping) from friends and acquaintances over the years but we’d been too busy exploring our beautiful and diverse country and didn’t want to commit to staying in one place for a long period of time. But when we were offered a chance last spring to volunteer at one of our favorite parks, Topsail Hill Preserve State Park, we decided it was time for a change, especially one that would give us an opportunity to give back in some small way and even save us a few bucks. Thanks to Betsy and Nancy (RV-A-GoGo), who have been volunteering here for several years, for recommending us to the person in charge of the volunteer program, Ranger Hallie who (for some unknown reason) immediately hired us!

Although volunteering is new to us and we don’t have a lot of first hand experience, we’ve learned through conversations, blog posts, etc. over the years that the positions available, work hours and how you are reimbursed for your work varies widely from park to park, depending on many factors.

At Topsail, a Florida government run park, every volunteer couple or individual is required to work a total of at least 24 hours a week. For a couple that’s 12 hours each, 3 days a week. In return, their campsite, water, sewer and electricity is provided free of charge. With Topsail’s standard rate being $42/night, that’s as much as a $1600/month value when figuring in taxes and electricity. Plus, while paying customers are limited to a maximum two week stay, volunteers can stay as long as 4 months contiguously!

The scheduling details for the 24 hours each week depends on which of the five volunteer jobs you are working:

Ranger Station: this job entails greeting day use visitors, collecting the $6 per vehicle day use fees, checking in campers, answering questions, etc. This is typically a single position instead of a couple, meaning that only one person works while the other person may lead a life of leisure (or they can switch out). The schedule is 3 days on, 3 days off with typical hours of 9:00 a.m. to 3:00 p.m.

Camp Host: there are usually four camp host couples, each responsible for a particular section of the campground. The camp hosts are responsible for cleaning sites (blowing leaves, picking up any trash, etc.) after the occupants have checked out, stocking supplies and cleaning the rest rooms and laundry facilities, etc. Camp host couples typically work three days on three days off.

Maintenance: this job entails performing various duties in the park. It could involve painting, general repairs throughout the campground and cabins, etc. This is typically an 8:00 a.m. to 5:00 p.m. (1 hour lunch) individual position. This person could possibly be called in after hours if there is a major problem. There are five individuals currently in this position.

Tram driver: the tram driver is responsible for transporting visitors from the parking lot at the beginning of the tram road to and from the beach every hour from 9:00 a.m. to 5:00 p.m. Lunch and breaks can be taken by the driver in between tram runs as well as performing additional chores such as cleaning rest rooms, picking up trash along the tram road, etc. There are three individuals/couples in this position. 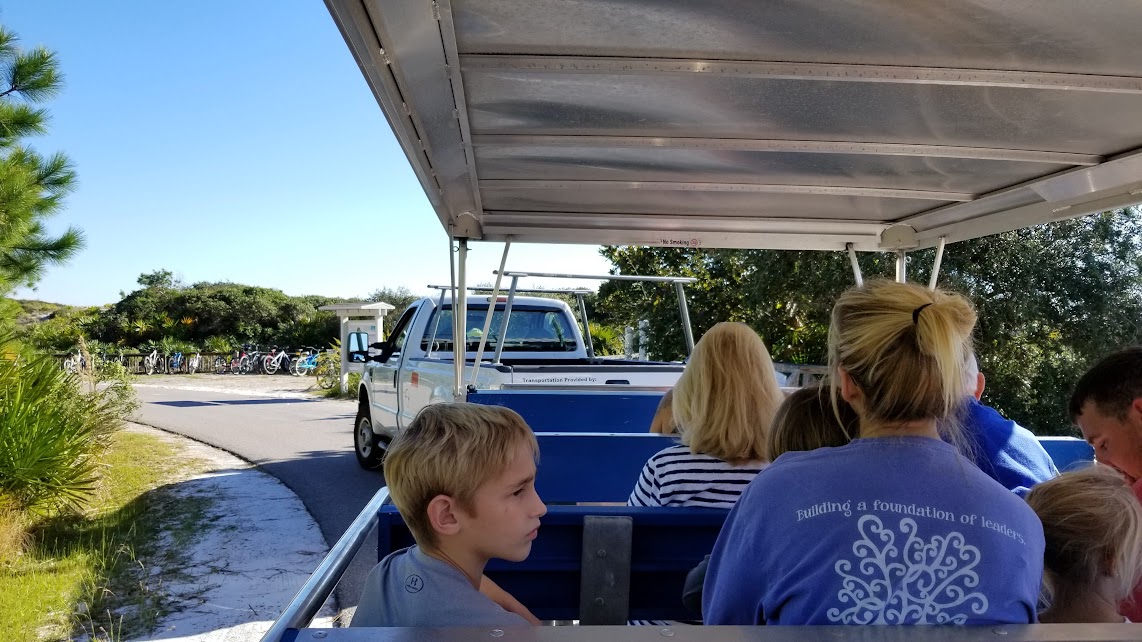 Cabin Support: this position involves cleaning any of the vacant 32 cabins or bungalows after the occupants have checked out, folding/packaging towels, linens, blankets, etc. Couples work from 11:00 a.m. to 3:00 p.m., individuals work from 11:00 a.m. to 5:00 p.m. three days a week. The exact schedule is flexible and somewhat random as it is based on the number of cabins and bungalows being vacated on a particular day. There are five Cabin Support couples.

So back last April when we met with Ranger Hallie, which job did we sign up for? Although any one of them would have worked for us, among the very limited available positions at that time, we decided on cabin support. Not because we had any great desire to clean up after someone else (we have a hard enough time cleaning up after ourselves) but because of the fixed hours. We would work the four hours and be done for the day. Although Rob probably would have liked a maintenance position, those hours would be much longer for him alone since it was an individual position and I wouldn’t have to work at all (oh darn!). 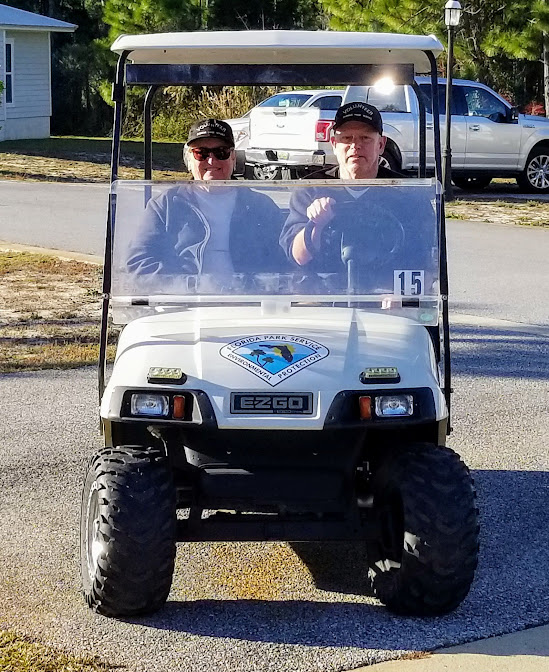 On our first day of work (Thursday 10/18) all decked out in our fashionista (NOT) Florida State Park volunteer uniforms (gray Topsail T-shirts, black shorts, black socks/shoes, black volunteer baseball cap), we met with Ranger Hallie an hour earlier than normal, who explained some of the administrative tasks we would need to do like filling out our weekly time sheets, how to sign out a radio, completing the mandatory on-line training, etc. We also were given master keys to the cabins and bungalows and the combination to assorted facility door locks. Hallie then took us for a tour of the park in her golf cart, explaining some of the park’s history as she drove along, showing us all of the numerous support buildings, then dropped us off at the cabin support OPS building.

For those not familiar with the history of Topsail, the park was once privately owned and called the Emerald Coast RV Resort which was acquired by the state in 1998. There are 156 RV sites with water, electricity, sewer and cable TV, 22 sites for tent camping, 16 bungalows which sleep four and 16 cabins which sleep six. 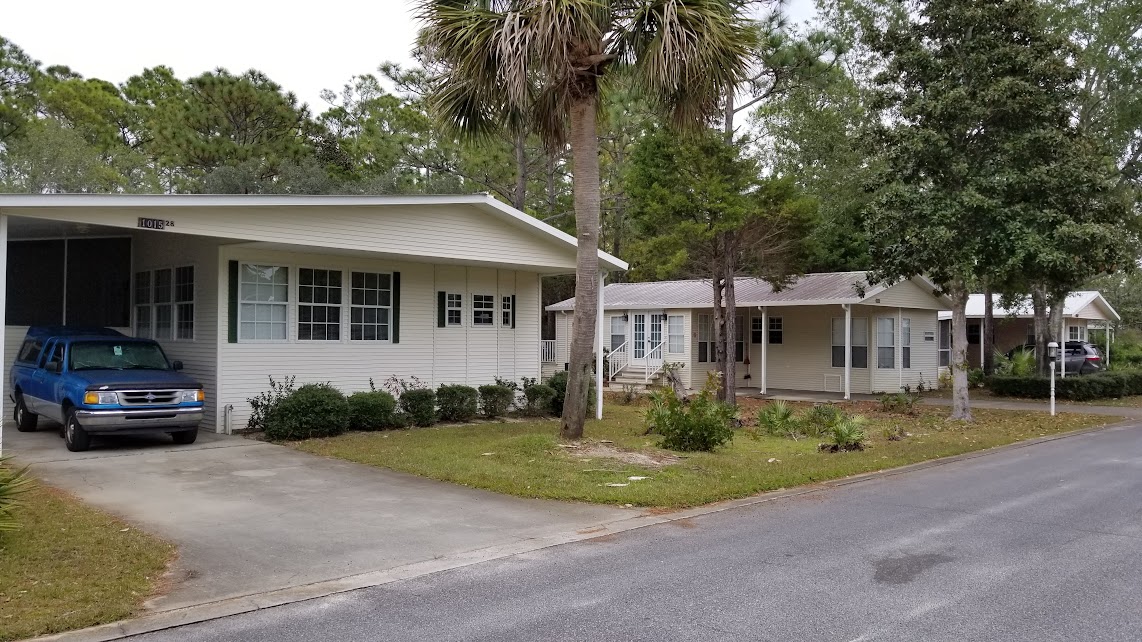 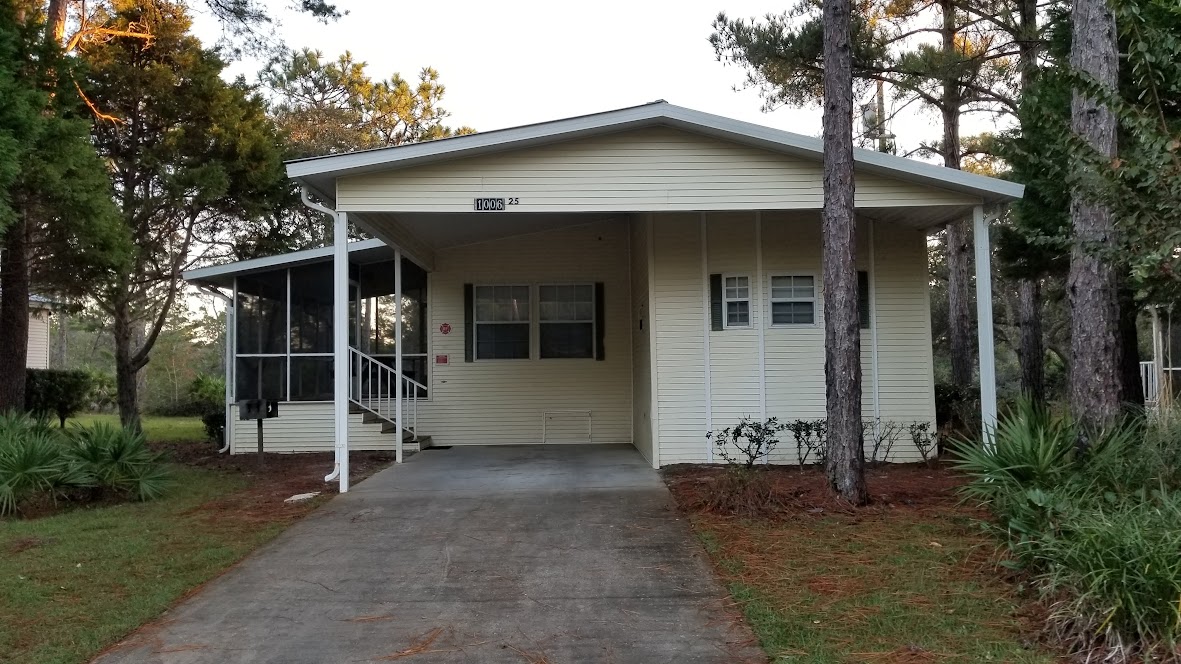 The 16 bungalows were once privately owned residences and each one is a unique design. These older units, most of which have one bedroom and one bath, are in the process of being updated by the park staff and maintenance volunteers. Each can sleep up to four people (2 on a pullout sofa or futon). 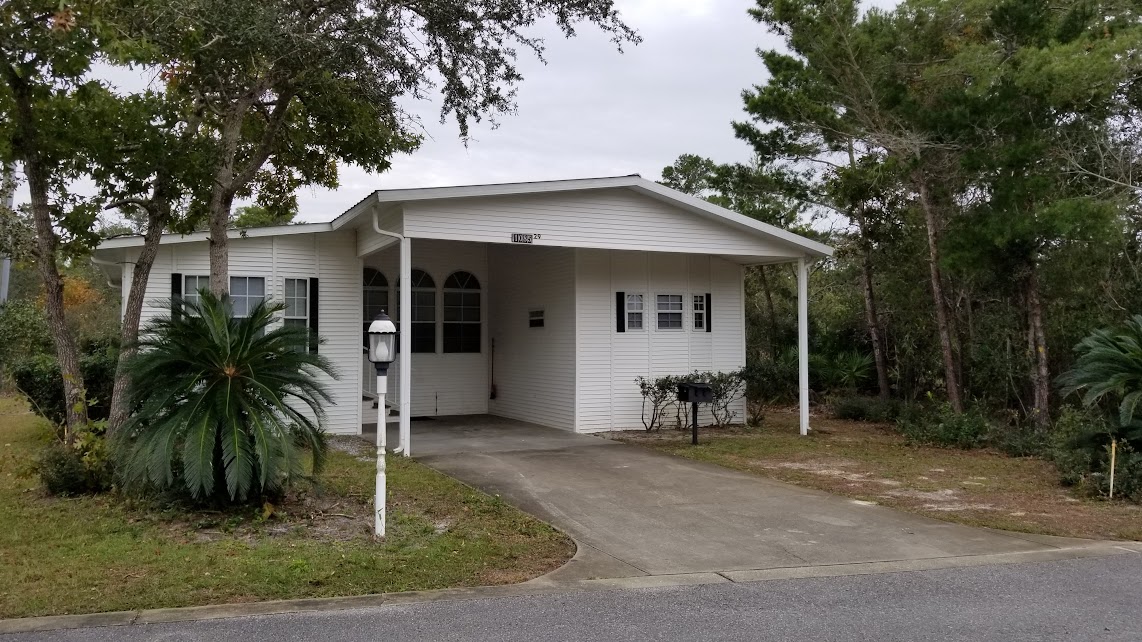 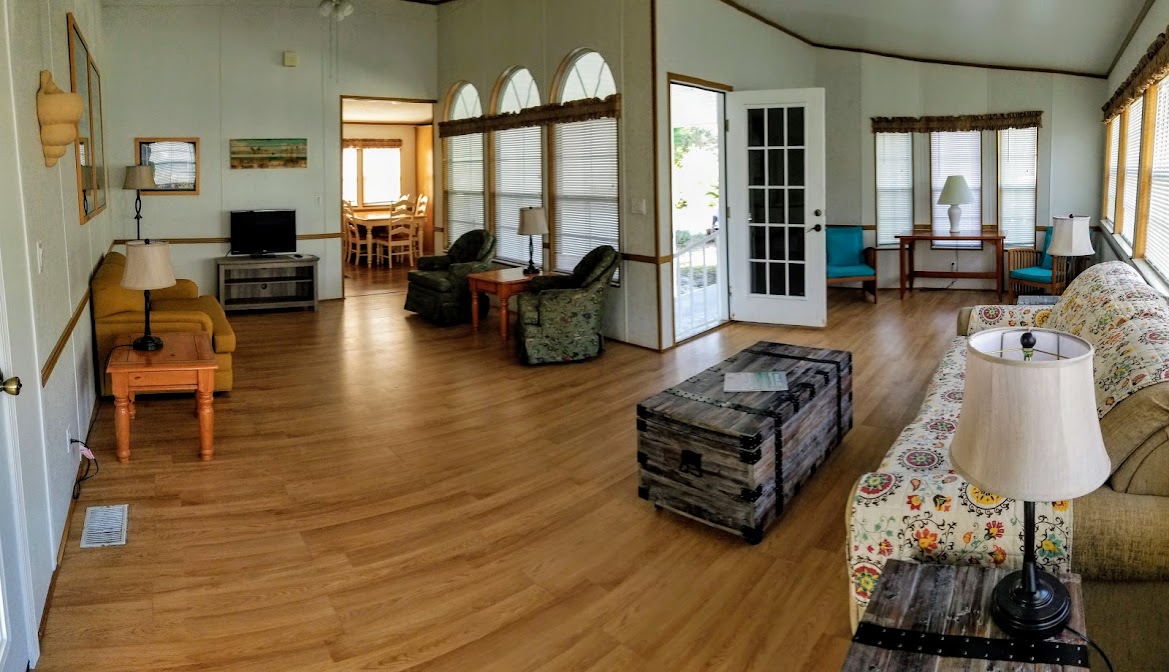 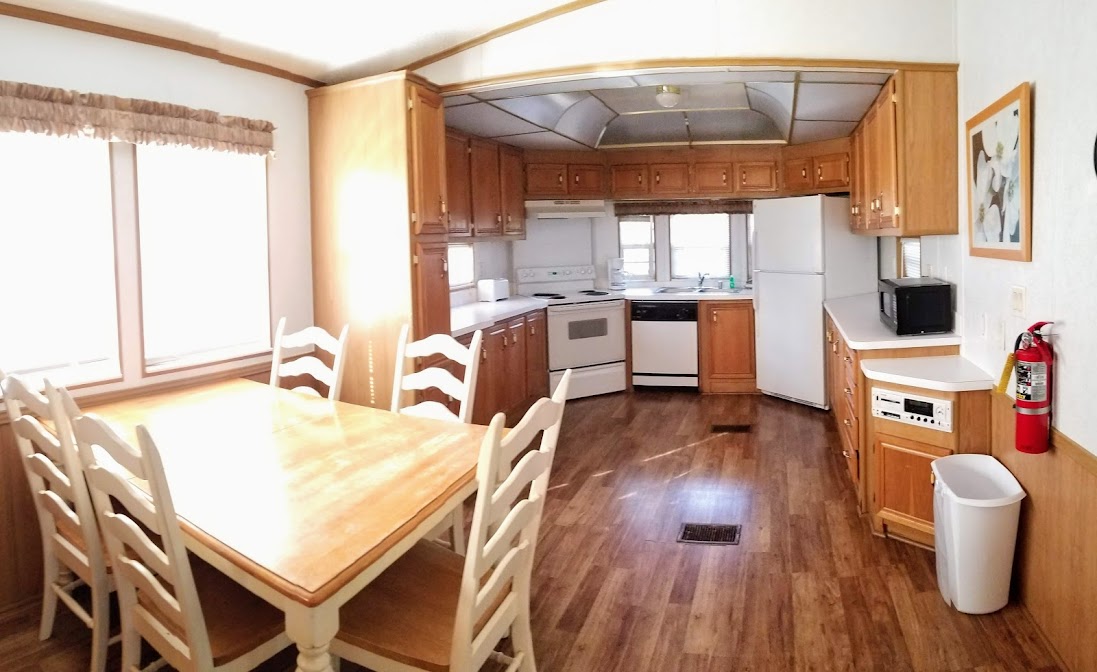 The additional 16 cabins were opened in 2009 and all are the same 2 bedroom, two bath, spacious layout that sleeps six (two on a pullout sofa or futon). 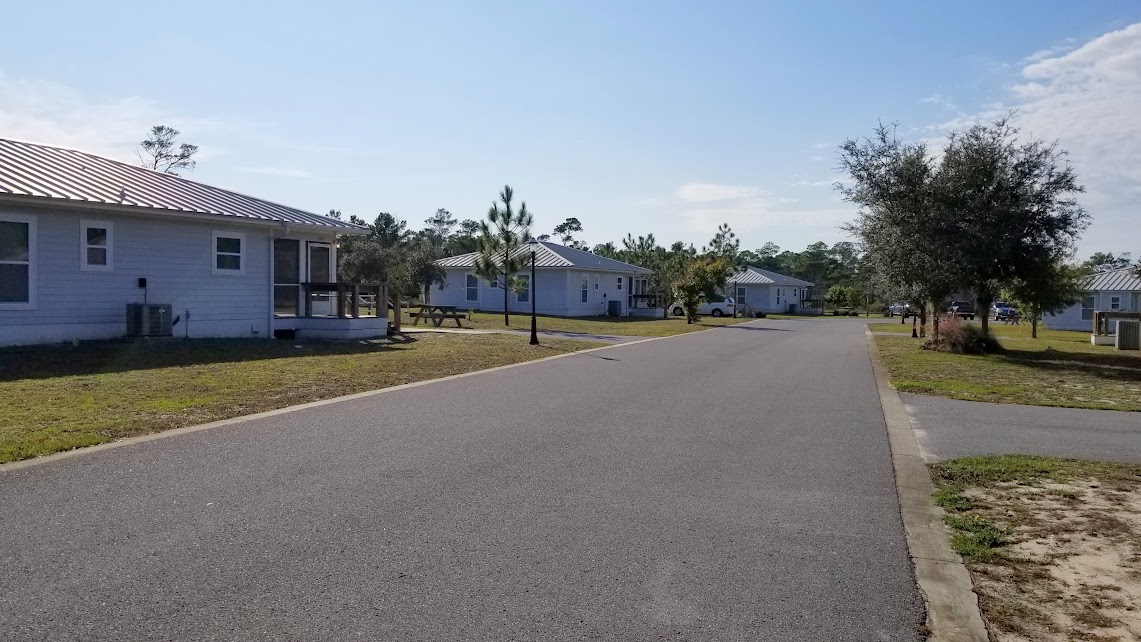 Each bungalow/cabin unit has a full kitchen complete with a refrigerator/freezer, microwave, cook top, coffeepot, and toaster. In addition, all of the cabins and a few of the bungalows have a dishwasher.

On our first day of work the number of units to clean was relatively low because the park was closed to the public due to hurricane Michael. However, Topsail had become a staging area for the hurricane Michael disaster and the cabins were still in high demand by first responders and other personnel from assorted government agencies working long days in the Panama City area.

So our task on day one was to clean one cabin and one bungalow. In addition to getting instruction from Larry, a regular employee who supervises the Cabin Support volunteers, another very nice volunteer couple, Jack and Marcia, took us under their wing explaining the job in detail, such as where everything was stored in the Cabin Support OPS building, what supplies we would need to clean a cabin or bungalow, how to sign out a golf cart, etc. Thanks to Jack and Marcia we got off to a great start!

Since it was very hot and humid outside and continued to be for the first few weeks, we were glad to be working inside in the comfort of the cabin/bungalow air conditioning. 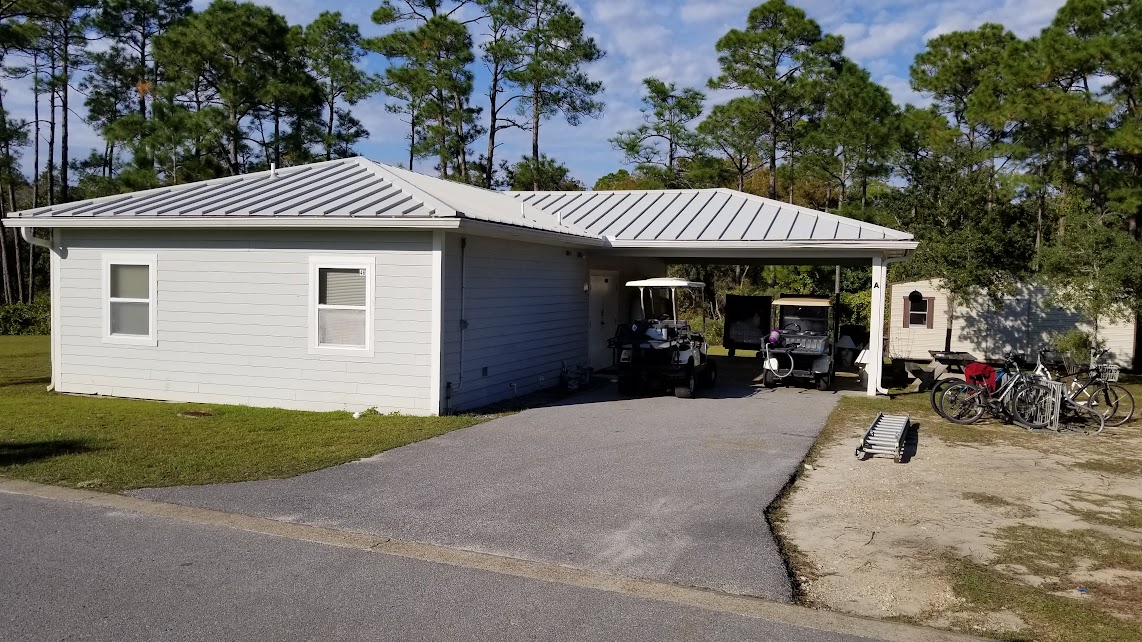 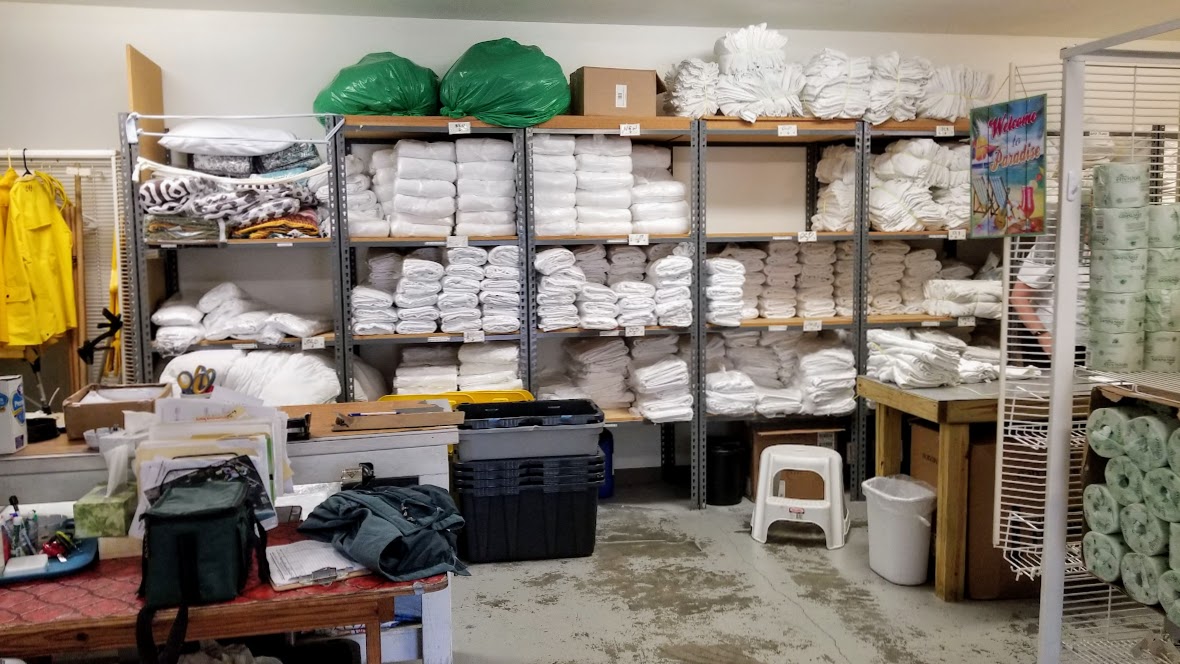 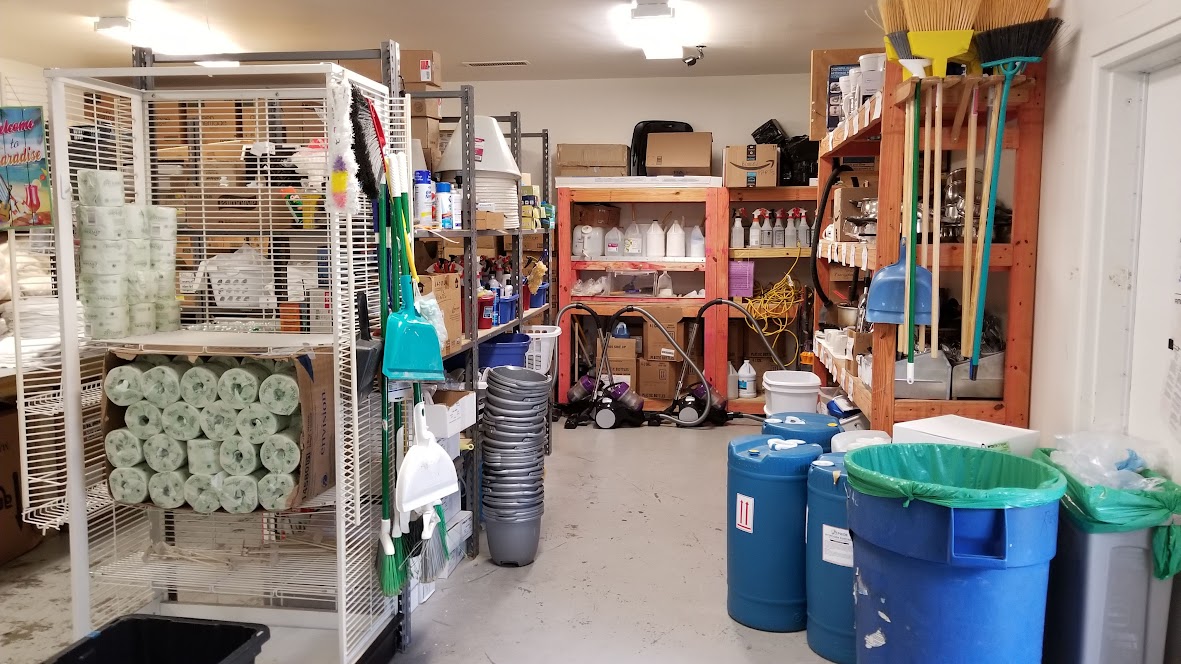 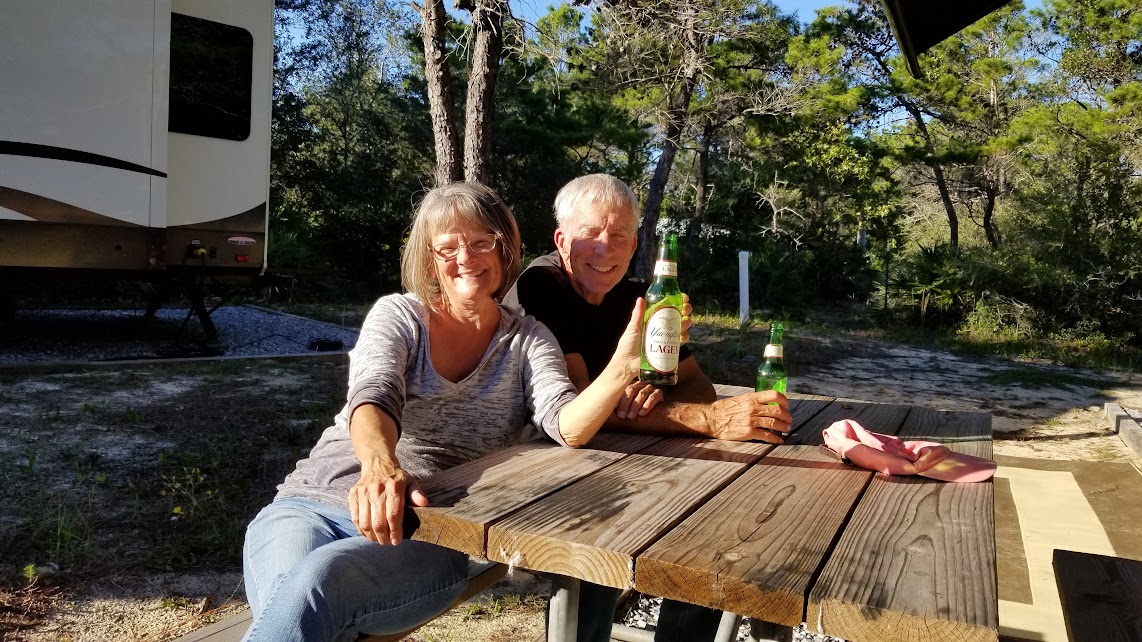 Over the next few weeks, we quickly adapted to our new routine and the cabin support processes. During October, the good part about the park being closed was that we didn’t have to wait until 11:00 a.m. (the usual guest check out time), we could start work earlier, so we mostly started at 9:00 a.m. and were done by 1:00 p.m. When there weren’t any cabins to clean, we collectively decided to keep busy by tackling those often ignored tasks in the unoccupied units, similar to a fall or spring cleaning in a house.  Cleaning fan blades, pulling out the refrigerator and cleaning behind that, removing and cleaning the air conditioning grills, wiping down all the woodwork, washing all the windows, cleaning the frames around the screens on the porches, etc. Ah yes, such fun!

So where do the volunteers stay? Some of the volunteer accommodations are in a reserved area of the park known as work camper row (5 full hookup wooded sites). Camp hosts usually stay in the particular section of the park that they are supporting on a non-reservable RV site. Our site was located in the cabin/bungalow loop (Coastal Cove Cir.), which was great because it was just a very short walk to the OPS building. Except for one couple next to us, the downside was we were somewhat isolated from the rest of the volunteers. 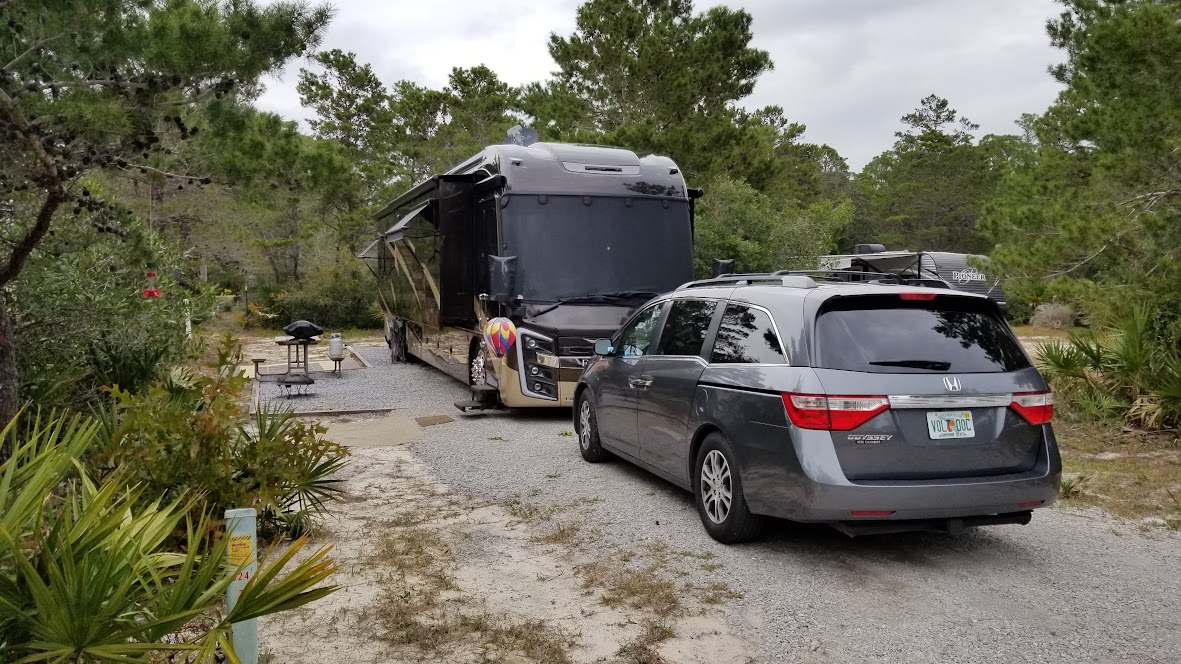 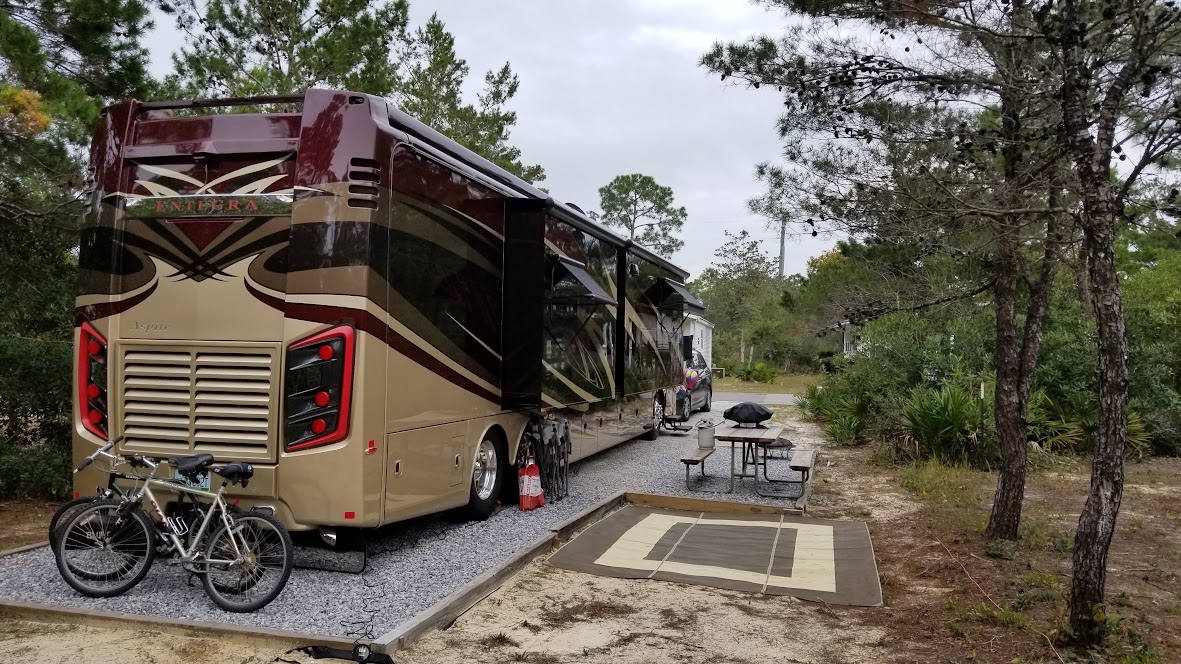 Once a month there is a Volunteer Appreciation Potluck which was the week after we arrived. Great opportunity to meet all of the other volunteers, other rangers and support staff. What a great group of people! Everyone was exceptionally friendly and made us feel very welcome. One thing we hadn’t expected was how genuinely appreciative the full time park staff was for the volunteers. Practically everyone on the park staff told us daily how much they appreciated our efforts and how the park could not function without us. We even got an appreciation certificate even though we hadn’t worked a day yet!

The November potluck would be a Thanksgiving dinner but more about that in a later post. Early in November we attended a mandatory monthly “camphost” meeting where all the volunteers and most of the full time staff introduced themselves to each other and learned about various park schedules and activities.

On October 27th, the campground officially re-opened. In a matter of hours it went from being completely empty to totally full. The cabins and bungalows reopened on November 1st, so suddenly things got fairly busy for us, but in a good way. Sundays (or Monday of a holiday weekend) are the busiest because that is when most of the visitors check out.

We also had the pleasure of attending a few of the many park sponsored events such as a “Meet N Greet” with Friends of Topsail a non profit supporting the park, “Breakfast With A Ranger” discussing assorted interesting topics and “Topsail Talks” including “Pirates! Last Scourge Of The Gulf”. All of these programs are available to anyone, we enjoyed them thoroughly!

So how did we like our first volunteer/work camping experience? Would we do it again? We’ll let you know in our next post!