Alas, it was time to reluctantly say goodbye to Acadia National Park, Bar Harbor and our friends to begin our journey south back to RI. After a quick but hearty breakfast at Sips Restaurant (see more details in our Downeast Deliciousness post) in Southwest Harbor, in came the slides, up came the jacks and off we went. Our destination would once again be Camden Hills State Park (same big rig site U56) for another two nights. At least the weather was much improved since the last time we were there – no fog, no drizzle, just a bright blue sky with a few wispy clouds. Nice! 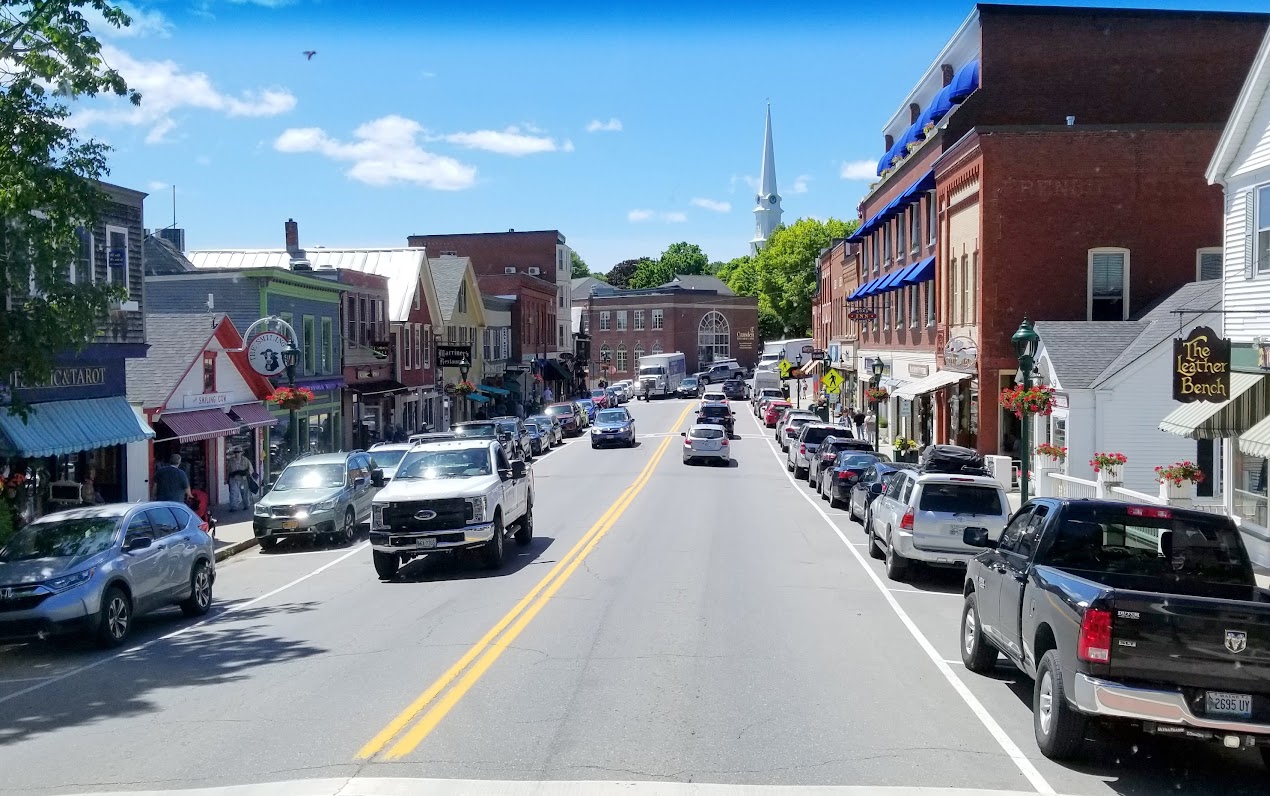 The next morning we made a return visit to a restaurant in Rockland that we really liked in 2015, the Home Kitchen Cafe (see more details in our Lotsa Lobstah & Lighthouses post). Despite having to wait for a table, the food was just as good as last time! 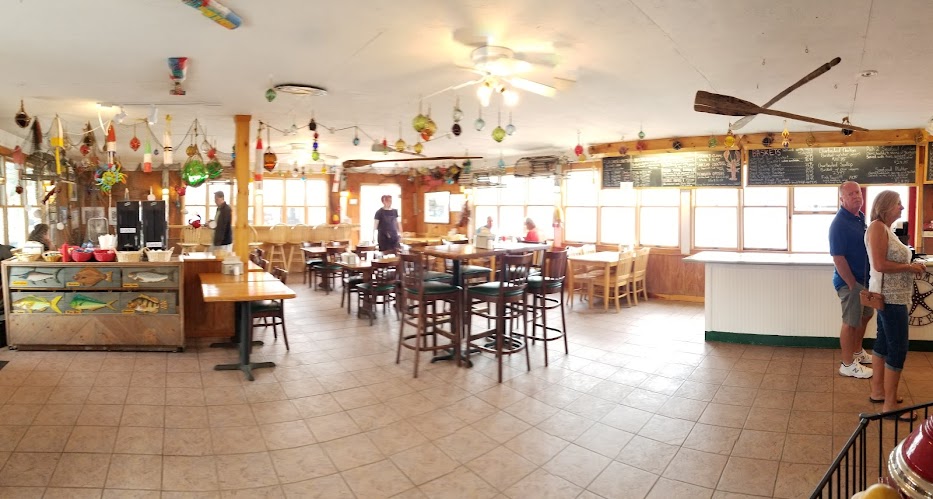 Later in the day we met Betsy and Nancy at McLaughlin’s Lobster Shack in Lincolnville for lunch. Since we had lobster salad rolls the night before, we opted for a change of pace – we each had a cup of fish chowder ($3.75 each) and shared a small order of fried clams ($11.95) no pics sorry!). Excellent! 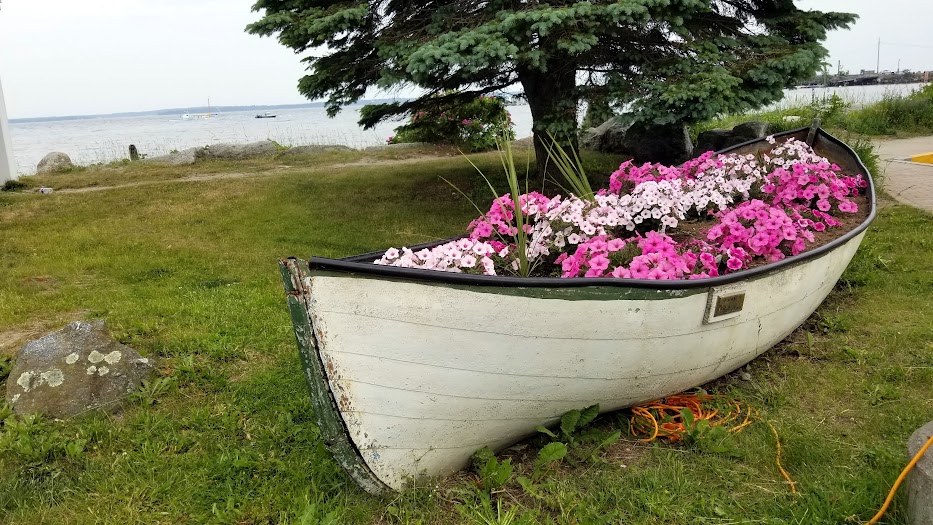 Afterwards we walked around the town a bit, poking our heads into a few of the shops. Although it was fun browsing (especially in the Maine Artisans Store), none of us purchased anything except for yummy blueberry sorbet across the street at the on-site ice cream shop next to the The Lobster Pound Restaurant. 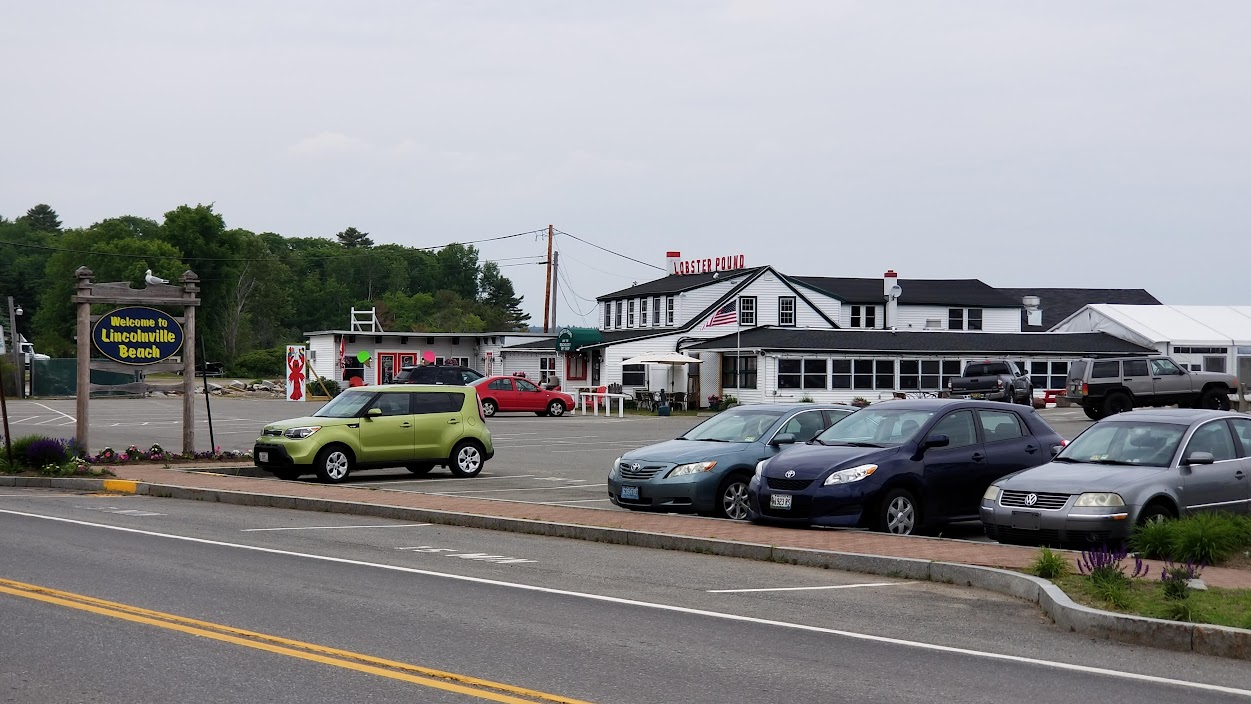 Finally it was time to say our final goodbyes to our friends and head back to the coach to prepare for our departure the next morning.

Before our departure, we made another trip to the summit of Mt. Battie to see the glorious view in the sunshine. Sure, looks a lot prettier than the picture in our previous post!

We didn’t make any reservations for our next night’s stay thinking that we might stay overnight again at the Harvest Host Red Hook Brewery (note since our last stay there, they have been re-branded as Cisco Brewers).

Driving through Bath along Route 1 , we could see one of the Zumwalt-class destroyers at the end of a dock at Bath Iron Works. Not sure if this is the Michael Monsoor destroyer which needs a new engine replacement after undergoing extensive sea trials.

Along the way we decided we should skip the brewery and stop instead in Freeport. So why did we want to stop there? Was it to shop in the wee hours of the morning at L. L. Bean’s? No, been there, done that many times before. Was it to have lunch at Harraseekett Lunch and Lobster Company? Well, not to have lunch but perhaps just to walk around and look at the boats (like we haven’t seen enough of them lately).  Or perhaps we needed to stock up on groceries at our favorite Bow Street Market? Maybe but hardly a justification for a two night stay there. 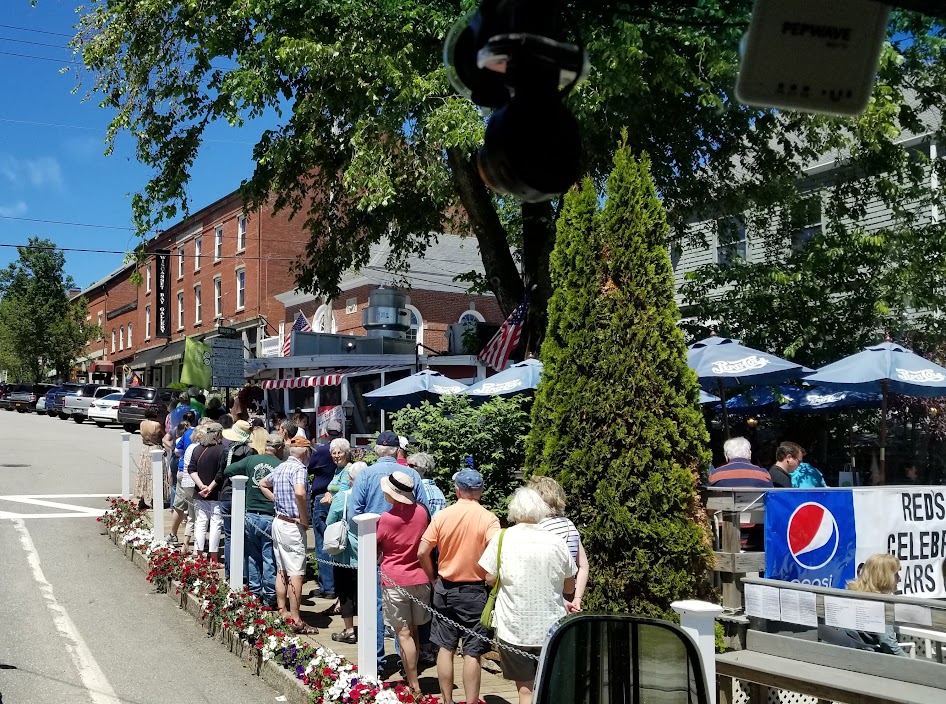 When we drove through Wiscasset, located about 30 miles north of Freeport, there under a Siberian elm tree on the corner at the intersection of Route 1 and Water Street in what once was a little red caboose was the famous lobster shack known as Red’s Eats. Not sure how many times we have driven by this place but every time there is always a long, long line.

Didn’t I mention that we were in search of the best lobster roll in Maine so how could we once again pass this place by? And now that we were salivating at the thoughts of another roll filled with morsels of our favorite seafood delicacy, would we be able to find some place to stay close by?

After checking a few websites and making a few phone calls, at $40/night, Freeport Village Campground was the cheapest campground in town!  Catering primarily to seasonal renters, this campground, run by lovely 60 year residents of Freeport, is an older park with 26 sites (two or three are pull thrus, the rest are back ins). When I called to see if there was availability, I was told that they only had one site available which was a back in. 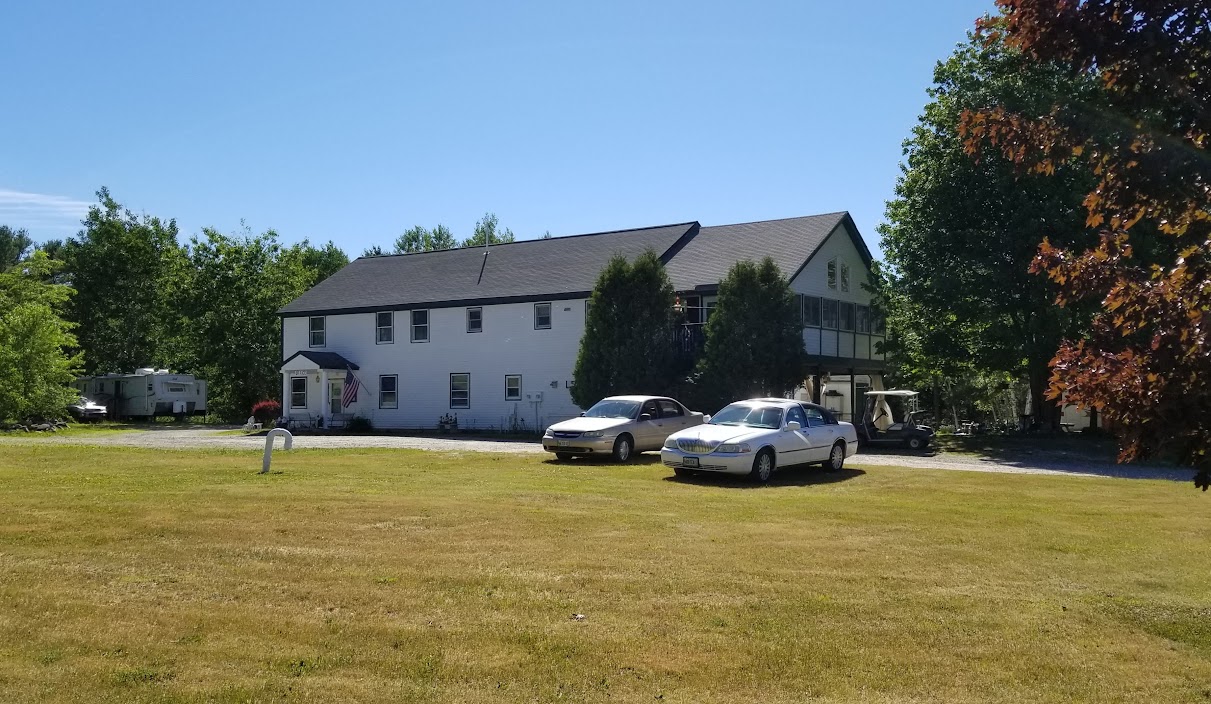 Once checked in, we made our way to our site (#12) but it was immediately obvious that we would risk major scratches along the top of the coach due to a huge tree with low hanging branches on the driver’s side. 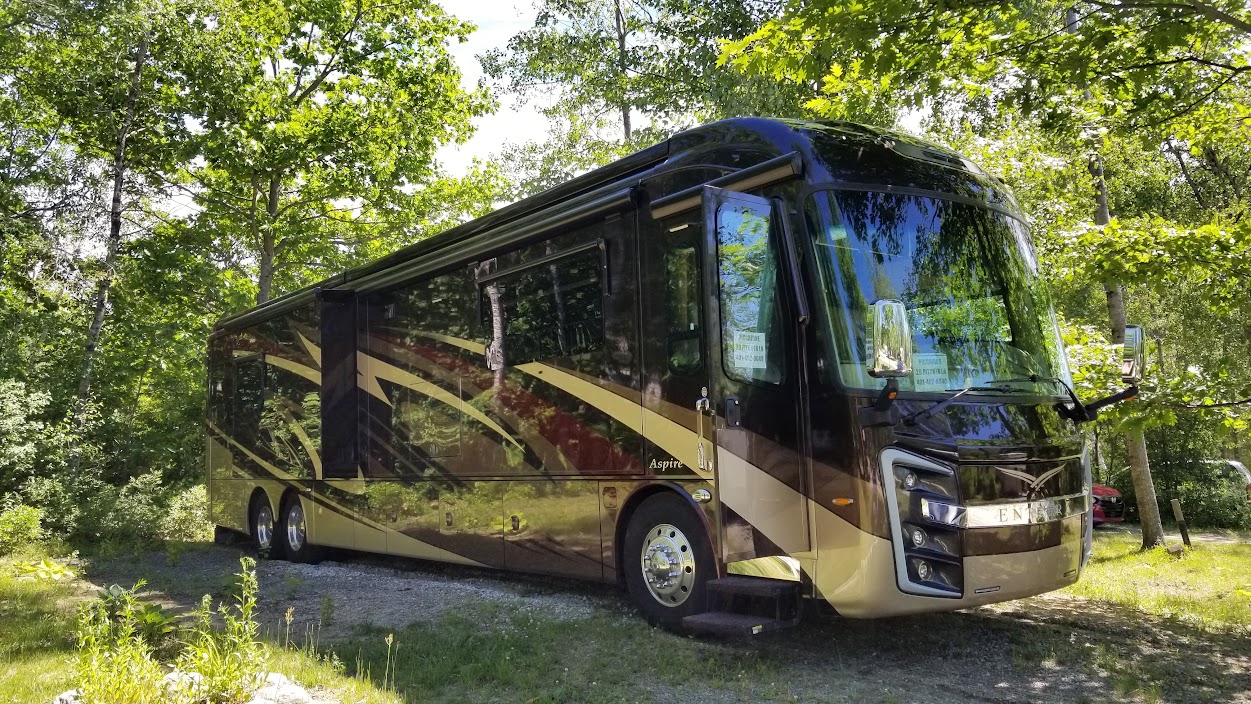 After a quick call to the office, the owner’s husband immediately showed up with a long pruner and very nicely trimmed the tree. In the meantime, our neighbors on the passenger side had come out to greet us and to warn us of several huge mounds of dog poo deposited by a large dog living in a rig on the driver’s side. Guess there are no rules about leashing your dog or cleaning up after it here! Pretty aggravating!

The next day over breakfast at Stone’s Cafe & Bakery in nearby North Yarmouth, we spent some time planning our day, strategizing on the best time to go to Red’s, a time when the lines wouldn’t be as long. Perhaps mid-afternoon after the lunch crowd abates?

After breakfast we drove through Freeport to see how many of the outlet stores or restaurants had changed (some had), then drove down to the Municipal Wharf in South Freeport (where Harraseekett Lobster and Lunch is located) and then to Bow Street Market in search of some fresh produce.

Around 2:00 p.m. we arrived in Wiscasset where we were able to find a parking space on the street. Even at a distance we could see that there was a line! Silly us for thinking that there wouldn’t be one! 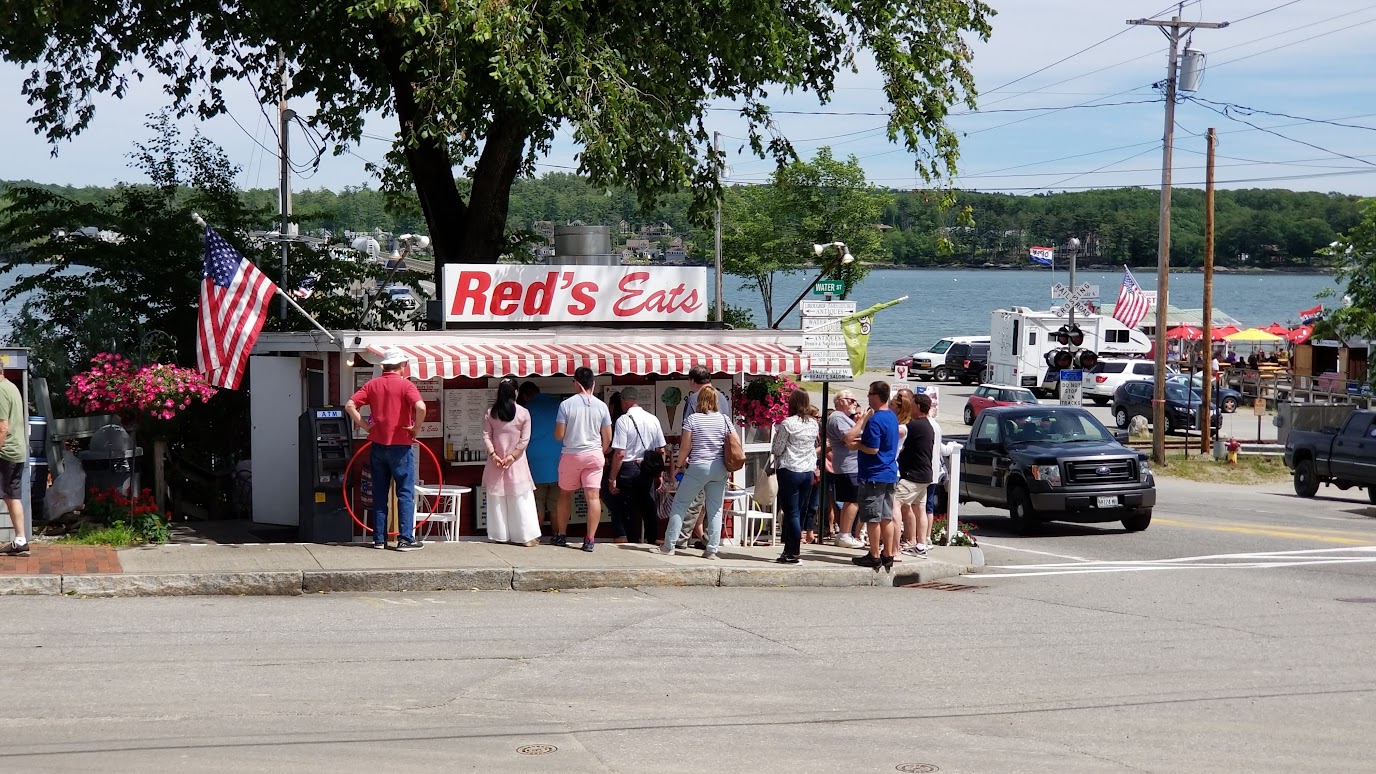 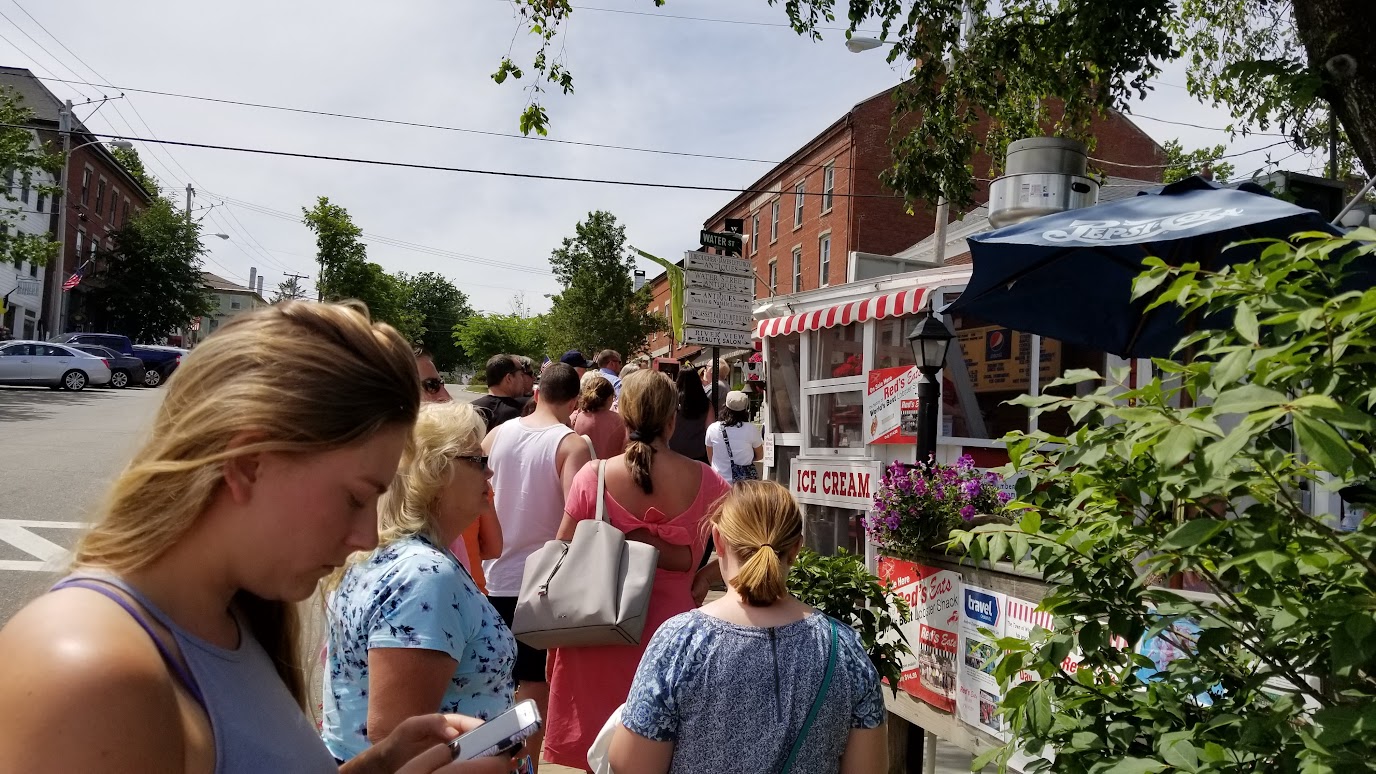 Good thing it was a fairly cool and pleasant day, not bad for standing outside waiting in line for 45 minutes. Actually 45 minutes wasn’t bad, I have read reviews on Trip Advisor of people waiting well over 2 hours! What’s nice though is that Red’s employees come out to the line periodically armed with a pitcher of ice cold water and paper cups which they offer to their patrons and even bring out small bowls of water for the pooches. Talk about taking good care of your customers!

Check out some of these stats from their website!

And all the awards they have won and the TV shows that they have been on: 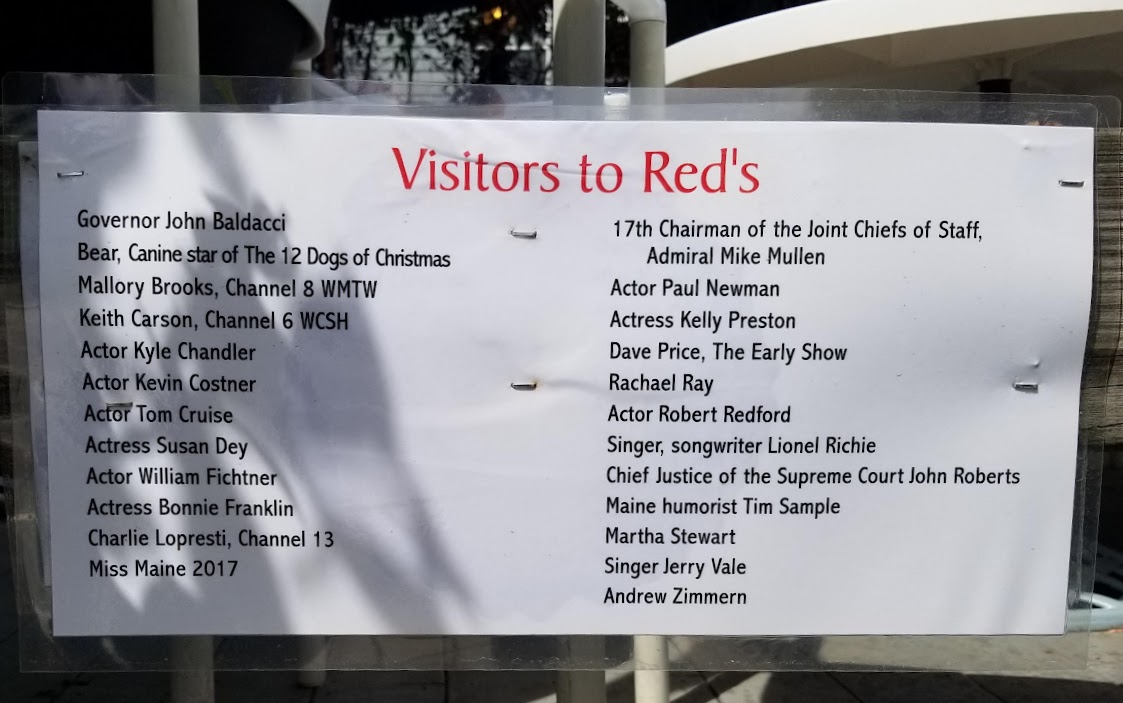 Now that we have been there we can understand why it is such a long wait. Be aware that the line moves relatively slowly, most likely due to the fact that where you place your order and where you pick up your order is at the same window with the same person waiting on everybody. Seems like there should be a better and more efficient way although this place has been in business, probably doing things the exact same way, for an unbelievable 78 years so who am I to suggest they should change their process!

Finally at the window, we ordered two lobster rolls, an order of French fries and two pieces of blueberry cake (didn’t realize how huge the pieces are, what were we thinking?? ), with plans to split one of the rolls while sitting at a picnic table there and take the other one (along with a piece of blueberry cake) back to the coach to enjoy later that day or the next day.

Speaking of picnic tables, there is seating right next to the shack but when we were there all the tables were taken. But if you walk out to the sidewalk, go down the hill, and cross the railroad tracks, you’ll find more picnic tables near the water. 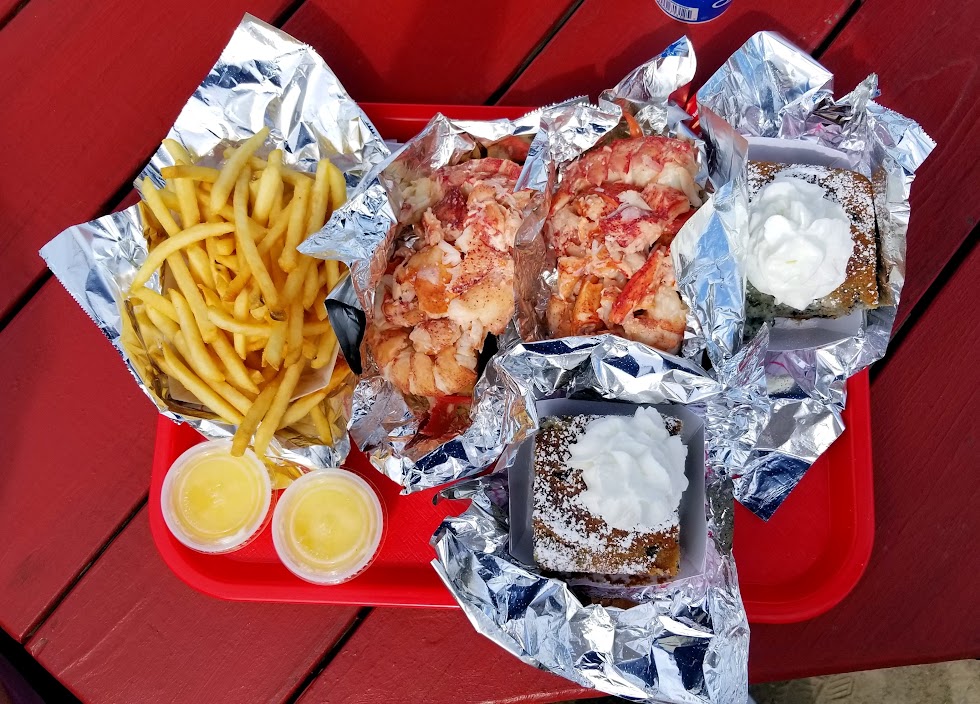 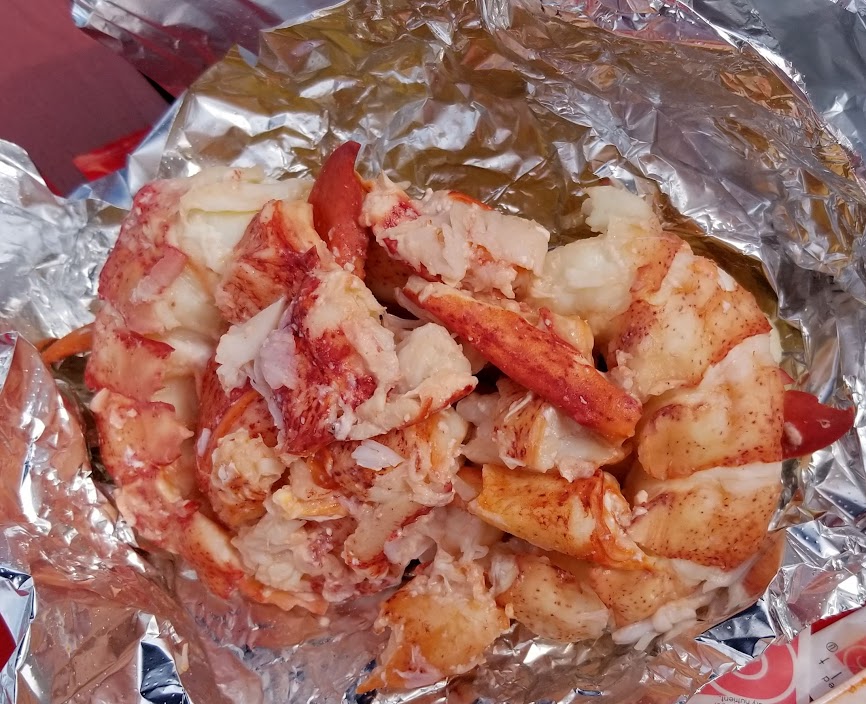 Wow! Well worth the wait (and the $25 price which is probably the most we’ve ever spent on a lobster roll) for sure! What an enormous lobster roll! There was so much lobster we couldn’t even see the roll! And better yet, it was unadulterated lobster meat, served with either a side of mayo or butter! No celery to be found here! Note that Red’s is cash only so be prepared if you go.

When we finished we went back to the window asking for a box to take our leftovers home. When the woman heard that we would be traveling, she not only gave us the box, but packed up a bag of ice so everything would stay cool. 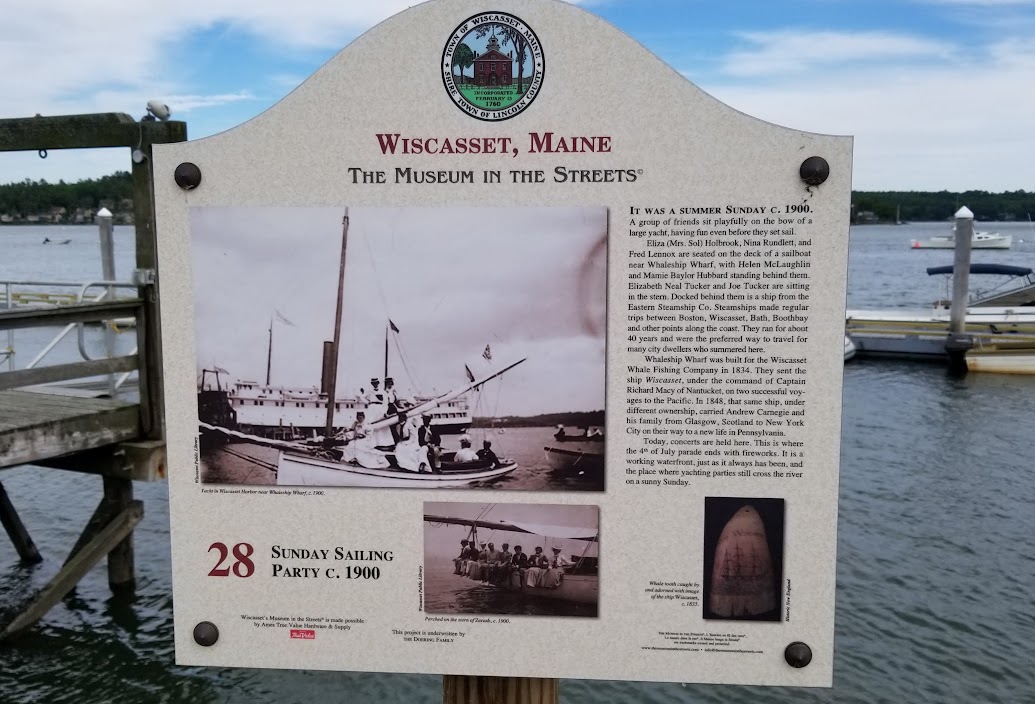 Before we left charming Wiscasset, we drove down to the waterfront area where we read about some of the steamship and train history of Wiscasset on The Museum in the Streets signs. 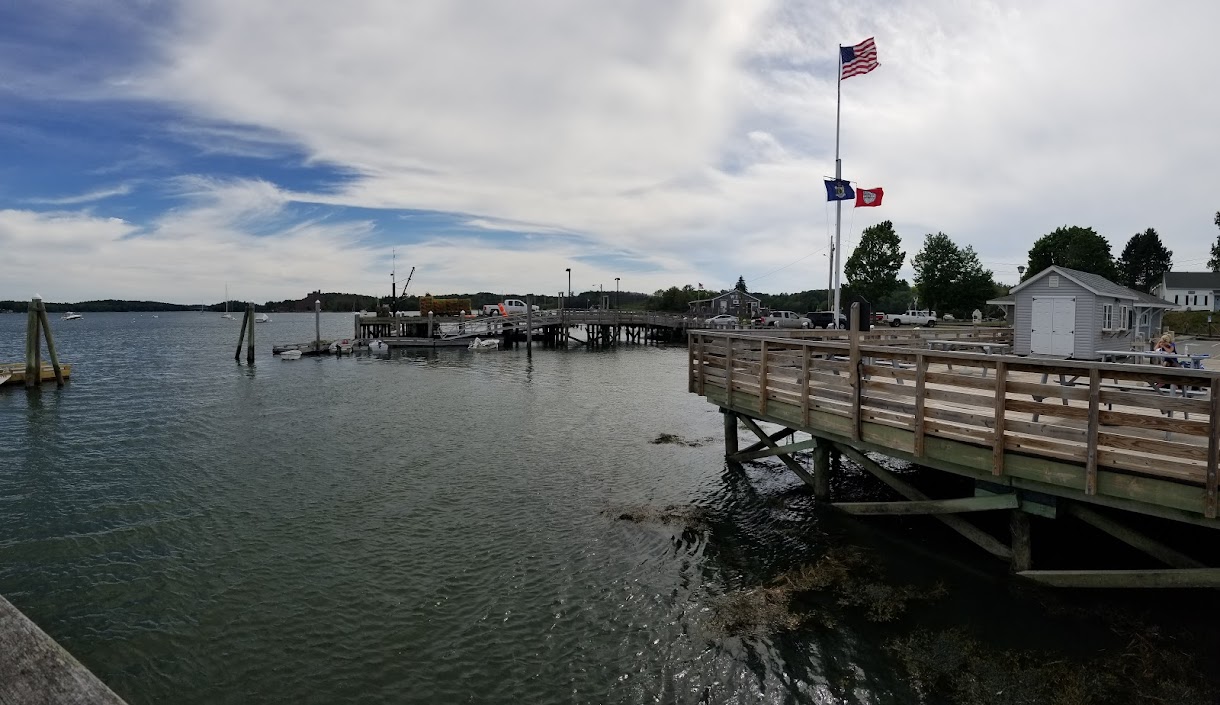 As we left the wharf, we ended up on Lee Street, driving by Castle Tucker, a historic mansion built in 1807. 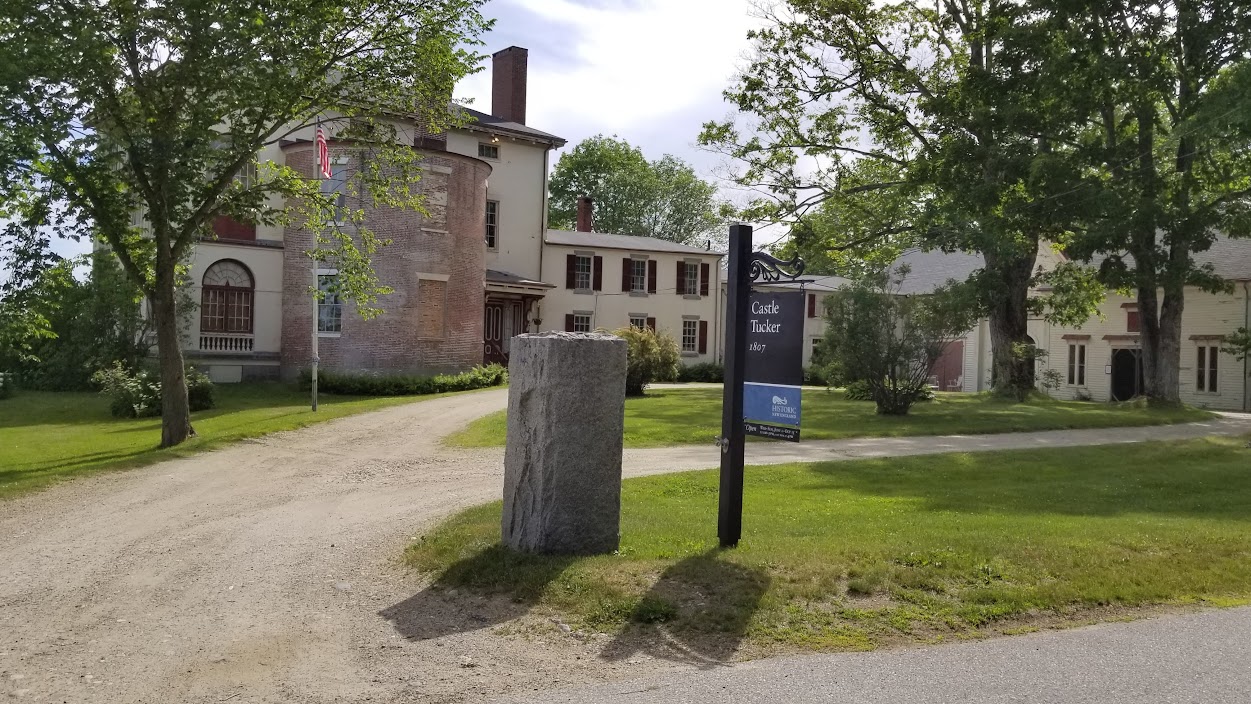 So was this the winner of the best lobster roll in Maine? Hmmm, methinks maybe it is but our investigation will have to be continued at some point in the future (I can only hope)! We did some detailed analysis on the Red’s roll and it came in at 10oz. overall and a little over half a pound of fresh lobster meat. That’s about double the size of your average Lobster roll so not only is the meat very fresh, but the cost per pound is relatively low.

The next morning it was time to depart on the final leg of our journey back to RI. Despite quite a bit of traffic, it was an uneventful drive to our summer spot in East Greenwich. Although we had already said goodbye to Maine earlier that day, it felt like we were still there as we consumed our second lobster roll and blueberry cake that night. Just as yummy as it was earlier in the day!

So what’s next? No immediate plans until we hit the road again early in September so we’ll all have a break from our blog posts. With the heat and humidity that we faced upon our return, we decided to not immediately move to the boat – just too darn hot! Instead we’ll concentrate on  finishing some projects on the coach, attending to medical appointments, etc.

Until the next time, Maine…..