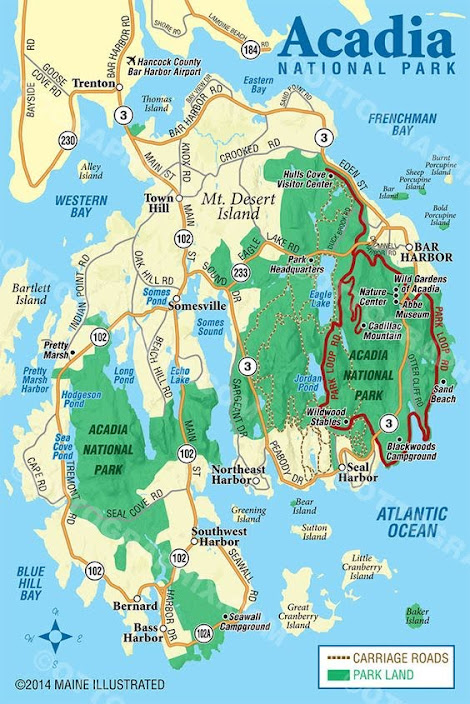 The small boat building community of Southwest Harbor on the quiet side of Mt. Desert Island was our destination for the next four nights, specifically Smuggler’s Den Campground, a mere 40 mile drive from Schoodic Woods. Since check out time at Schoodic Woods was 11:00 a.m. and check in at Smuggler’s was 3:00 p.m. we had lots of time to kill. A phone call to Smuggler’s confirmed that they weren’t real flexible with their check in time, but after letting on that our reserved site was unoccupied, a little persuasion was applied and they finally relented – we could check in around 1:30 p.m. Geesh! It’s rare that we have run into such stubborn policy enforcement especially considering there was no one previously on our site.

But we still had a couple extra hours on our hands so what better way to kill time before leaving Schoodic than to have lunch!  After parking the coach in the huge parking area near the registration building at Schoodic Woods campground, it was a very short drive to nearby Chase’s Restaurant in Winter Harbor where we dined on a lobster salad roll and sauteed scallops. Yum, the seafood here can’t get much fresher! More about the restaurant in our Schoodic Savories post. 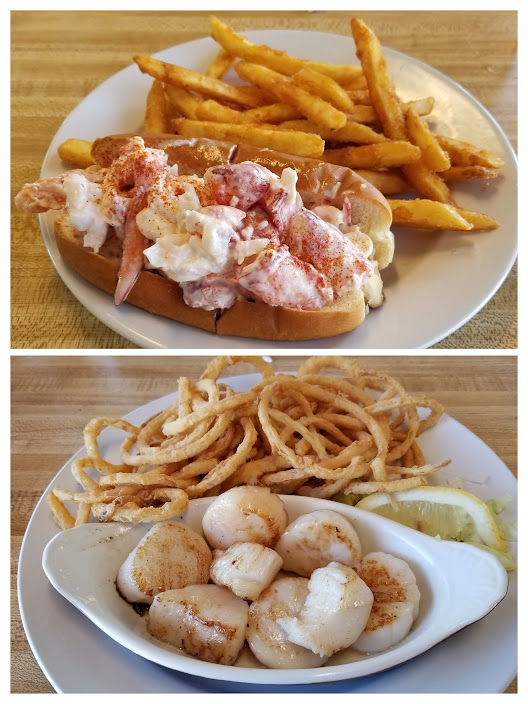 Staying at Smuggler’s Den was a good choice for us. It was located far enough from Bar Harbor and Acadia National Park so traffic congestion wasn’t a concern, yet it was close enough so when we wanted to visit those locations it was only about a 20 minute drive.

When we were back at Schoodic, we heard about a Monday thru Wednesday dinner special at the Seafood Ketch in Bass Harbor – two entrees served with potato/rice and veggie, a loaf of freshly baked bread and a bottle of wine, all for $30. Sounded good! Since we arrived on Wednesday that cinched up our dinner plans for the night. Our only mediocre experience there has been documented in our Downeast Deliciousness post.

Maine boasts over 70 lighthouses found on 3400 miles of shoreline and fortunately one was located just around the corner from the Seafood Ketch, so we visited there after dinner. 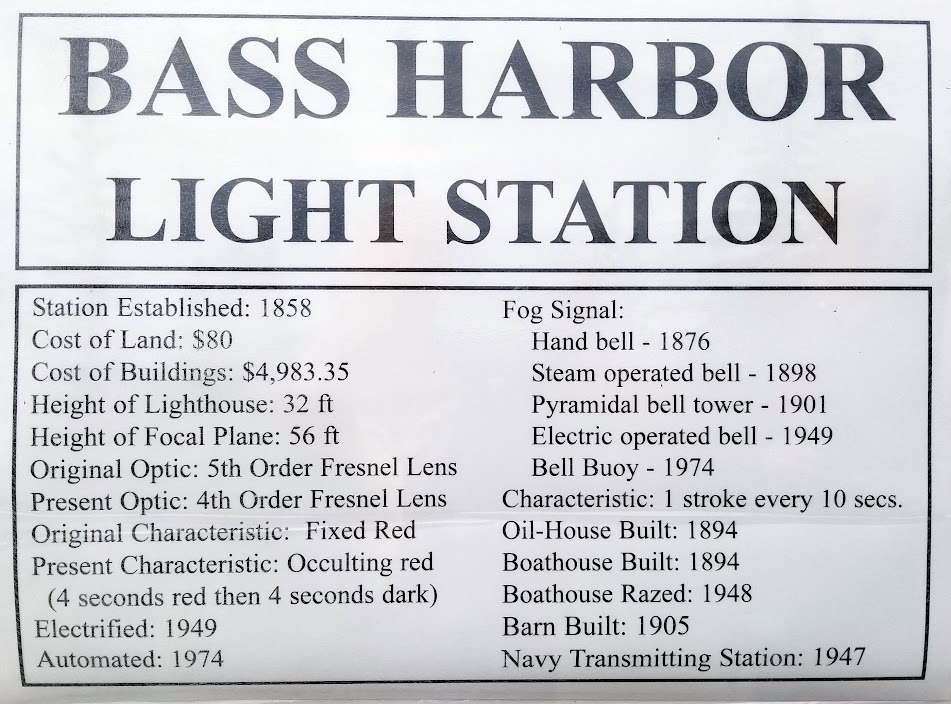 Built of brick on a stone foundation in 1858, electrified in 1949 and automated in 1974, Bass Harbor Lighthouse stands 56 feet above mean high water and is accessible by car off Route 102A. Parking is free and is open daily from 9:00 AM to sunset. There is a trail that leads from the parking lot to the other side of the lighthouse where there are probably better views but we didn’t realize that until afterward. 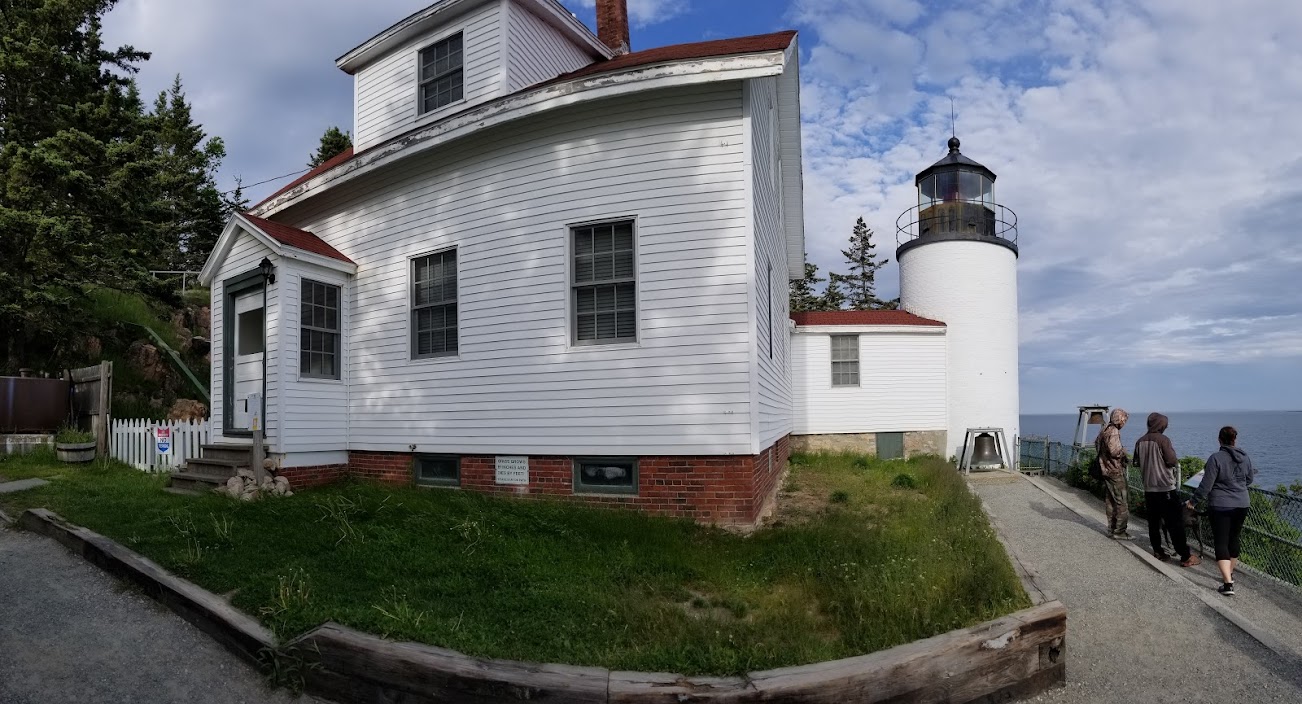 The original lighthouse lens was a Fifth Order Fresnel but was replaced by a Fourth Order Fresnel with a range of 13 nautical miles (15 miles or 24 km) in 1901. The keeper’s house is no longer used as a residence for a U.S. Coast Guard family, or anyone else. Unfortunately there is no access to the inside of the lighthouse.

On the southwestern side of Mount Desert Island, about four miles south of the main city section of Southwest Harbor, is Seawall, which faces the open ocean to the south and Great Cranberry Island to the east. It is so named because of a naturally formed seawall of loose boulders and rocks (cobbles) located nearby. They aren’t kidding when they say Maine has a rocky coast!

On the day we planned to head to Acadia National Park, the first thing on our sightseeing excursion agenda was a delicious breakfast at one of our favorite breakfast joints, Two Cats Restaurant in Bar Harbor. Check out our Downeast Deliciousness post where we review all of the restaurants we have visited in the area and this article in Down East Magazine! 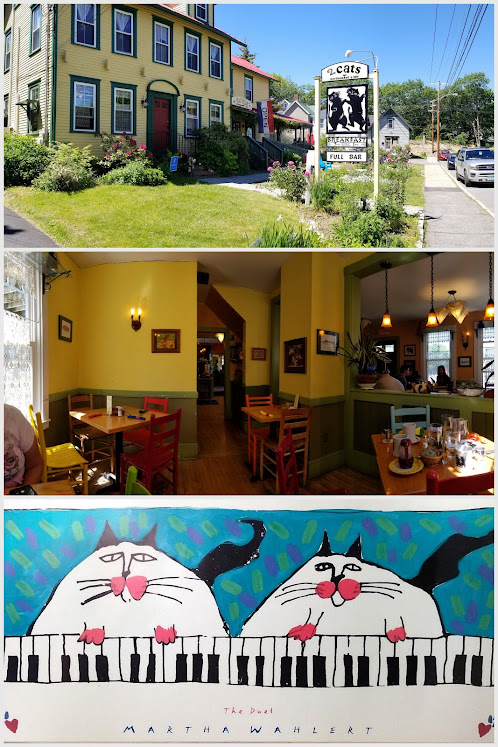 We would have loved another opportunity to drive out on the bar again like we did in 2015 but on that particular day, the tides weren’t cooperating – low tide was at 6:30 a.m. and 6:42 p.m. Definitely didn’t work for us!

Instead, breakfast was followed by a drive on the 27 mile Acadia Park Loop Road. Even though it wasn’t a weekend, we were astonished by the totally full parking lots and the overflow lines and lines of cars parked on both sides of the loop road at the very popular spots of Sand Beach (it wasn’t even that warm of a day) and Thunder Hole! Good thing we had been to both places before so we didn’t care about stopping.

Being a clear and bright day, at the summit of the 1530 foot high Cadillac Mountain which is accessed via the 3.5 mile Summit Road, we enjoyed stunning coastal panoramas of Bar Harbor, Mt. Katahdin (at 5,267 feet is the highest mountain in Maine), the many Porcupine Islands, Schoodic Peninsula and so much more. Even though we have been on the summit many, many times before, we never tire of the view! 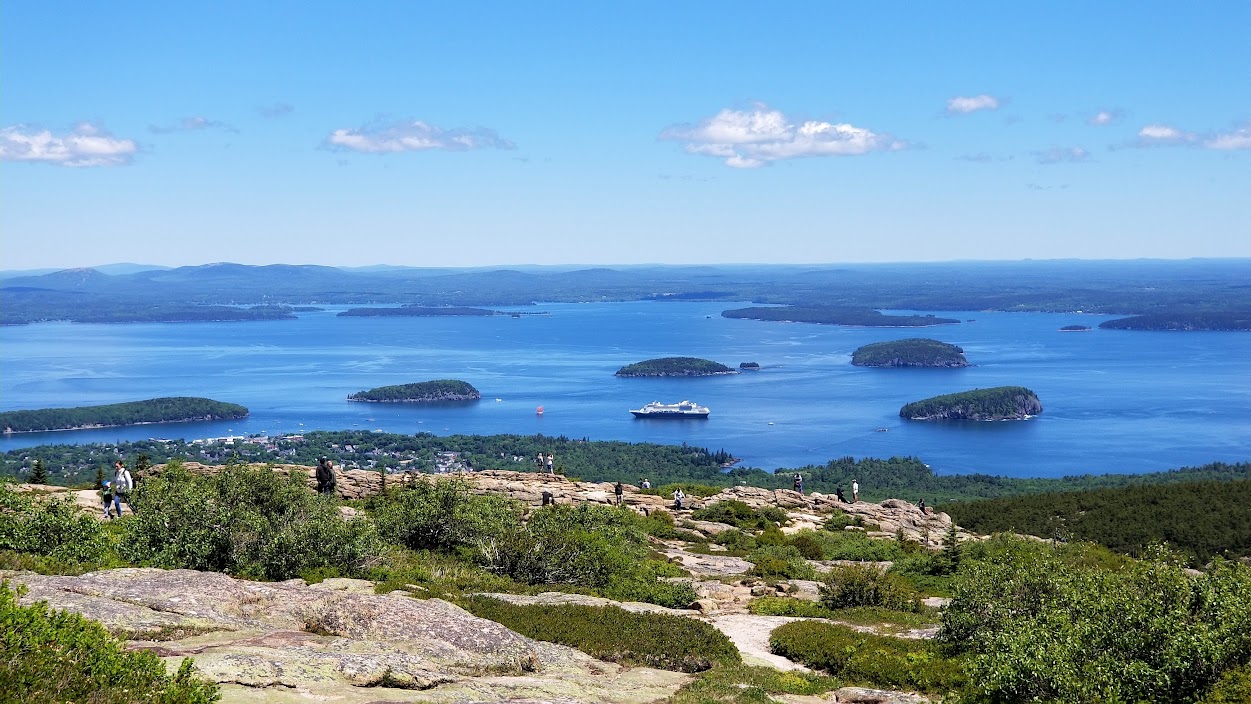 At 110 feet high, Otter Cliff which is one of the highest Atlantic coastal headlands north of Rio de Janeiro, is another favorite stop of ours along the loop road. We walked along the ocean path for a bit, eventually stopping to sit on the rocks for a while so we could soak in the awesome views and listen to the crashing of the surf against the rocks. 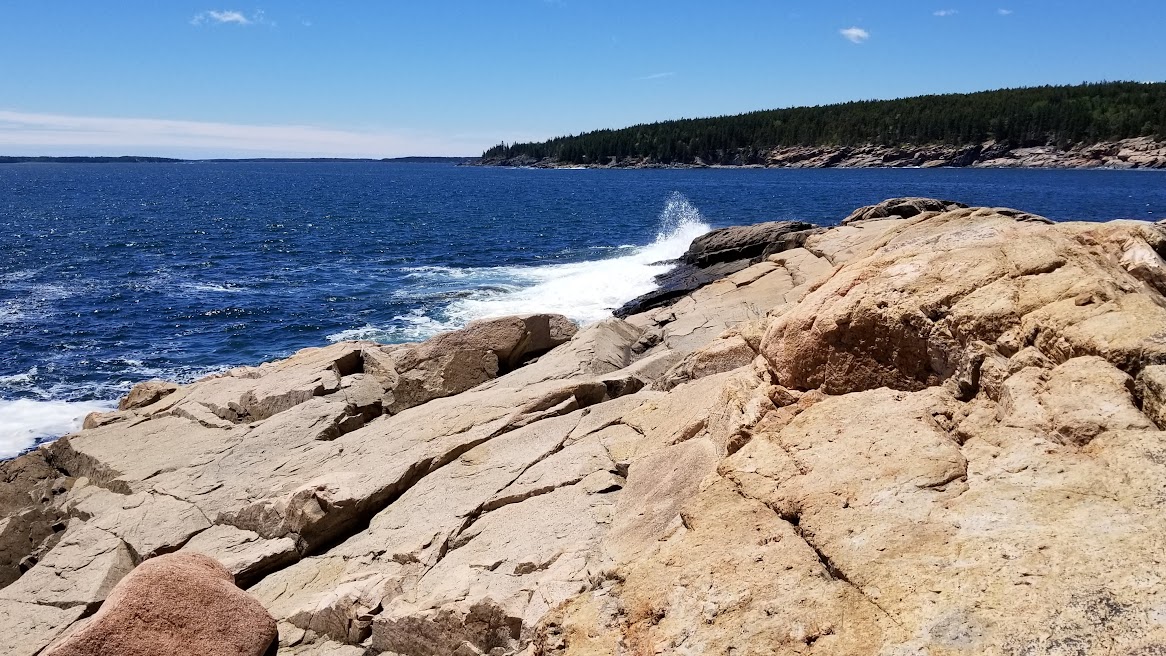 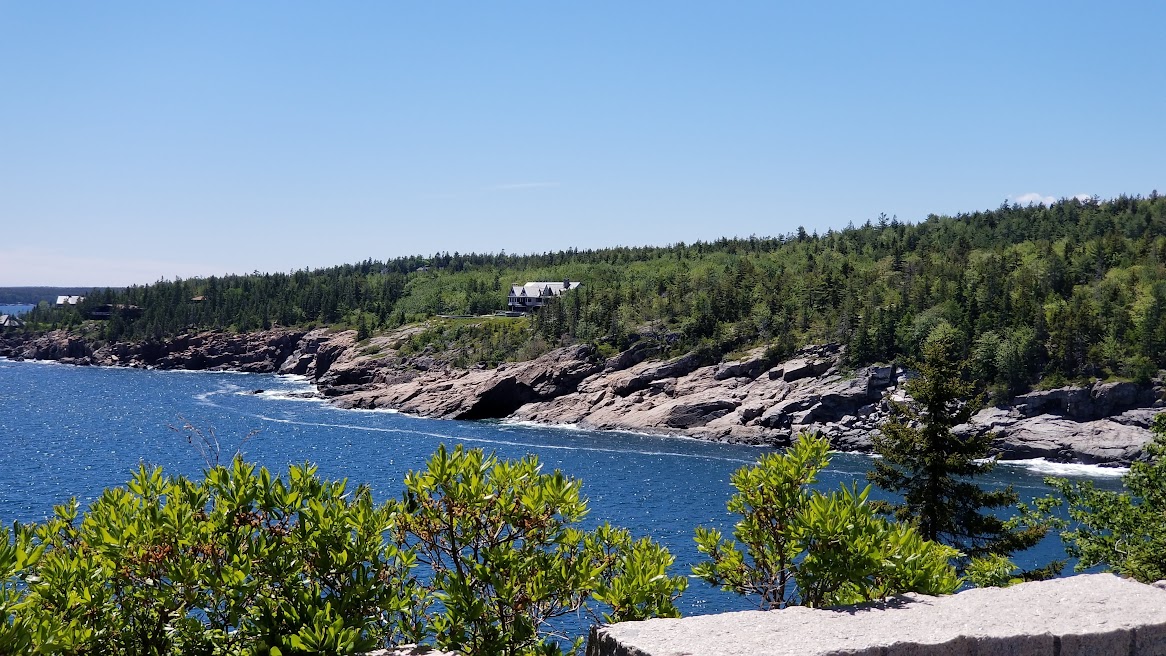 Rather than continuing the entire loop, near Seal Cove, we picked up Route 3 which would take us towards Northeast Harbor, one of the more picturesque and protected harbors in Maine. Here multi-million dollar estates of celebrities, successful business owners and financial managers hidden from the roads dot the shores near the harbor. We sat for a while and watched the working boats loading/unloading their catch and/or supplies.

Besides the beautiful harbor, visitors can stroll along the main road through town to explore several small and attractive boutiques, galleries and dining establishments.  Northeast Harbor also offers a mail and ferry boat to the Cranberry Islands as well as very informative, scenic nature cruises aboard the Sea Princess to the Cranberry Islands, something we did back in 2015.

Nearby is another place that we always have to visit especially in the spring, Asticou Azalea Gardens, which is located at the intersection of Route 3 and Route 198 near Northeast Harbor and across from the Asticou Inn.

Created by Charles Savage in 1956, this Japanese stroll garden is a must see for any visitor to the area, regardless of the time of year. We were fortunate that despite the fact that it was mid-June and late in the season, many of the azaleas were still in bloom, maybe a little past peak but still quite colorful and pretty anyway. 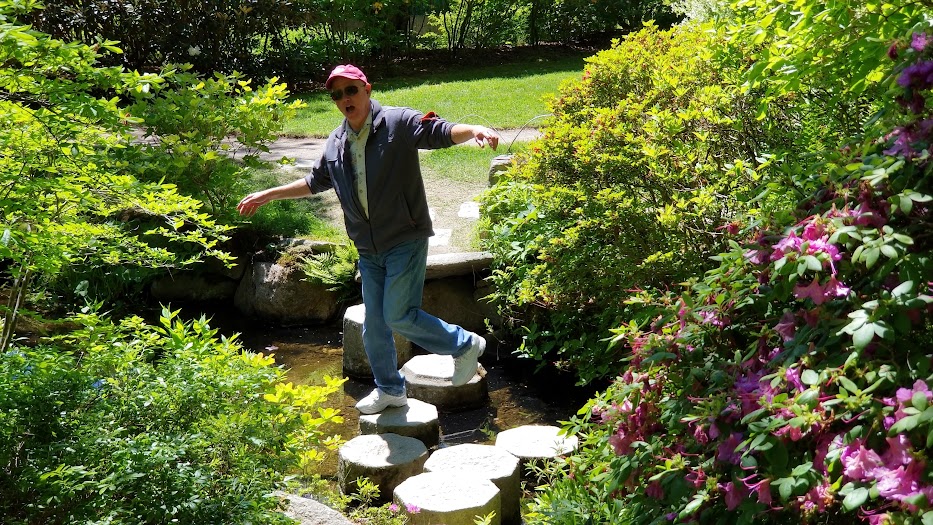 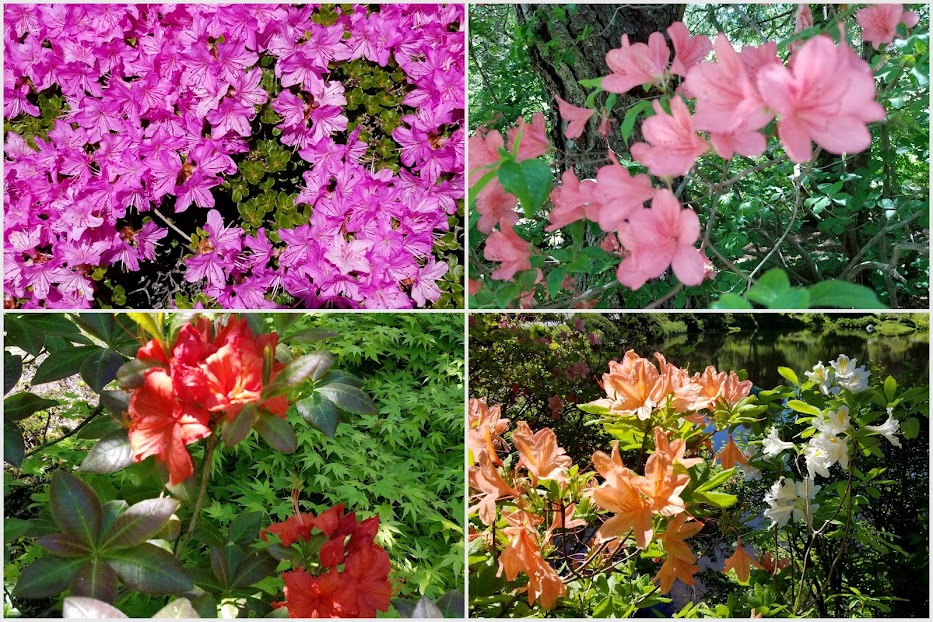 Although it is all very beautiful, our favorite spot is the sand garden which is raked regularly in a manner to suggest flowing water. The large stones are meant to represent islands.

Speaking of fjards (no I didn’t spell it wrong….see  Lovin’ Asticou, Acadia and a Fjard for an explanation), we drove along Sargeant Drive (again), enjoying an occasional view of the multi-million dollar estates (even the driveways looks pretty ritzy) and views of Somes Sound. Such a beautiful drive!

Finally, it was time for our sightseeing to come to an end. On our last night in the area, we faced a major decision – where to have dinner? Should we journey back to Bar Harbor and battle the traffic and crowds or find a place on the quiet side?

If you guessed that we went to the quiet side, you are right. The desire for another lobster roll (perhaps we’re trying to find the best lobster roll in Maine!) lured us to Thurston’s Lobster Pound in Bernard where seafood finds it’s way  “straight from the sea to your plate”!

After placing our order for a Jumbo Lobster Roll that we would split and a 1 pound order of steamed clams at the counter, we found an outdoor table overlooking the working harbor and waited for our food. You can’t find a much better view than from here! 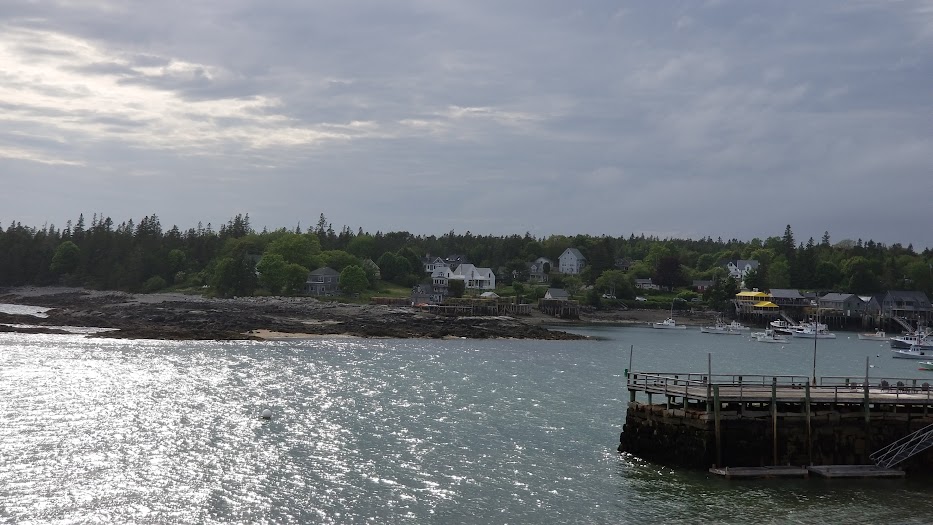 Both the steamers and the lobster roll were delicious! 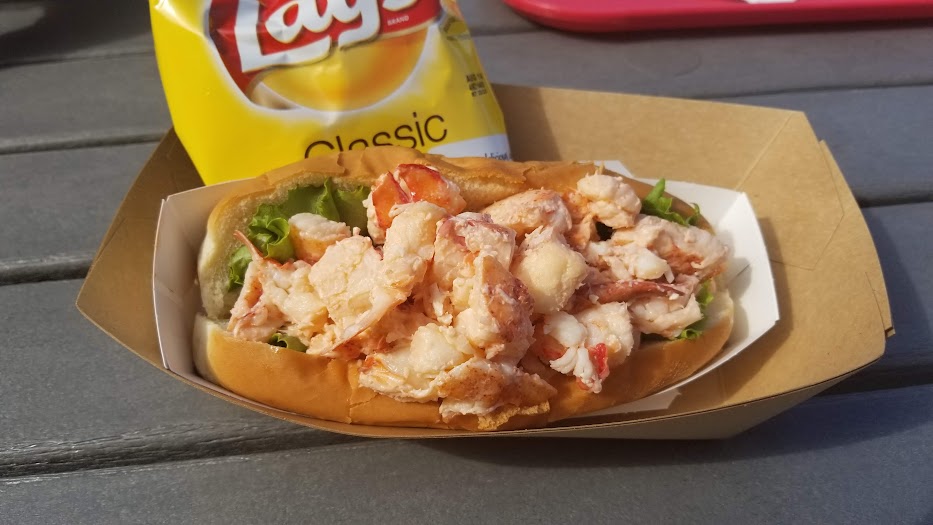 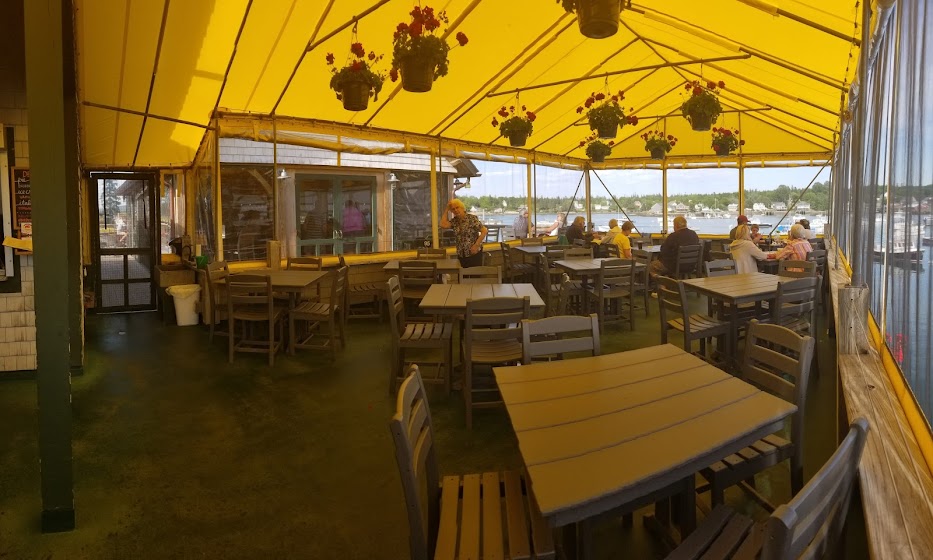 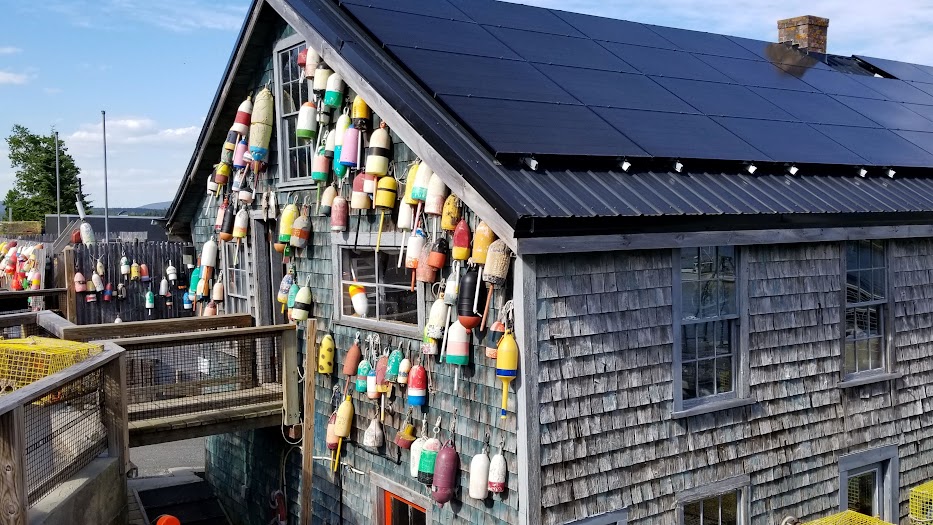 The next morning we would leave Acadia, Bar Harbor and Southwest Harbor behind to begin our journey back to RI where we would spend the remainder of the summer. Would this lobster roll be the last one we had in Maine? Stay tuned to learn the answer to that question! 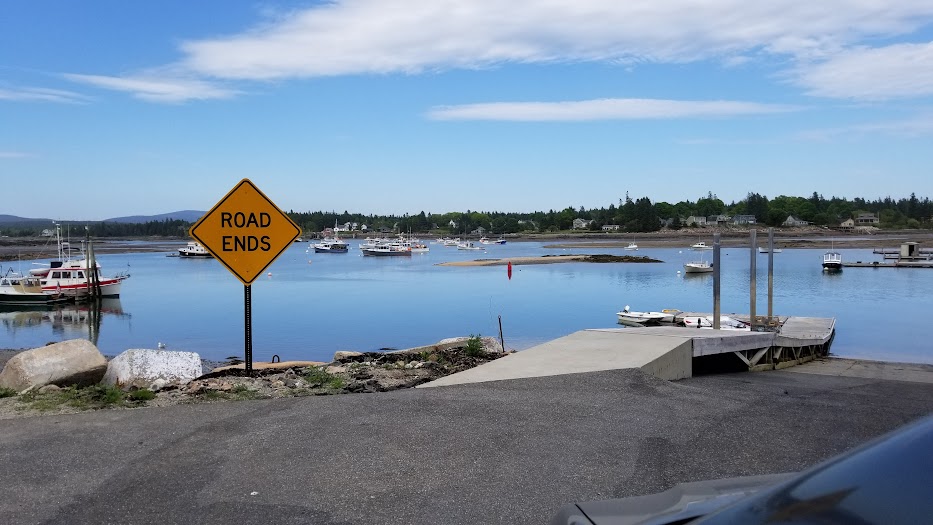