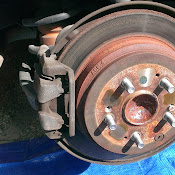 OK, this time its on our Honda Odyssey, not the coach! And they are only “broken” due to operator error (that would be me). And I am not talking about the brakes that stop the 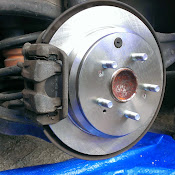 car, only the parking brakes. And they have been “broken” since last November when on one of our travel days I got distracted or had a brain fart and forgot to release the park brake while setting up the Odyssey for towing behind the motorhome. Duh!

A hundred miles or so with the park brake on pretty much rendered it inoperable and as I later found out, burned the brake lining completely off the brake shoes. I also suspect, based on all the creaking and groaning every time we stopped thereafter, that I had warped one or both of the rear rotor’s as well.

The Odyssey has 4 wheel disc brakes but those are separate from the parking brake. The park brake is a small drum style brake located inside the hub of the disc brake rotors on the rear wheels. Despite the potentially warped rotor, it was minimal and there was no real issue with the regular disc brakes, but due to the abnormal sounds, Linda setup her smartphone speed-dial with an entry for dial-a-prayer –  just in case I suppose.

These days I am no longer a proponent of doing my own car maintenance or repairs, particularly oil changes which are difficult and messy on our low slung Odyssey. And with some Honda dealers offering a full oil and filter change for as little as $10, it’s cheaper and easier to have it done. Note however, I do avoid places like Jiffy Lube based on some prior bad experiences due to improperly trained or qualified labor. 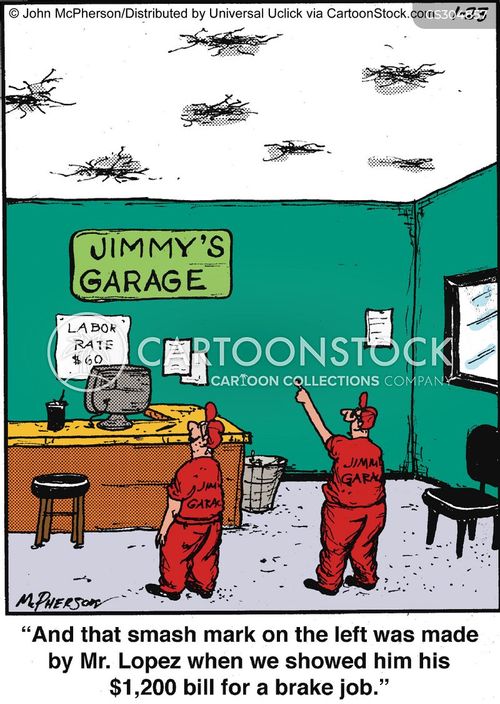 But brakes are one job that I still lean towards doing myself because I think most dealers and repair shops are demanding and excessively high profit margin on brake work. Not sure why, the job is usually very straightforward, not usually labor intensive and the parts are usually inexpensive. If I was just replacing brake pads for example, it is typically a 15 minute job and less than $20 in parts per wheel.

In this case though I knew I had at least one warped rotor (those are the metal discs that the brake pads press against) and with 80,000+ miles, it was time to do all the brakes anyway. At today’s competitive parts prices I think it is easier, faster and way more convenient to just replace the rotors with new parts rather than bother having them turned at a machine shop. So via our trusty Amazon Prime account I ordered a matched set of better-than-OEM rotors and pads ($194) for all four wheels, new shoes for the park brakes ($8.13), new springs and parts kit ($7.25) for the park brakes, new clips and rubber boots ($10.31 & $9.35) for the front and rear calipers, a small tube of synthetic high temp brake grease ($3.48), and a spring puller tool ($8.12) for working on the parking brakes. I was assuming that the calipers were fine (they were) as I had not seen any signs of brake fluid leakage.

All those parts came to less than $241 delivered to my RV lot. Now I know Honda dealers typically charge about $500 per axle for new pads and machining the old rotors and about $650 for new pads and new rotors. So that’s $1300 worth of repairs and it doesn’t even include the parking brake repairs! Sure, an independent would do it for less, but still nowhere near my $241 cost!

Now I had to find a place and time to do the work. The parts arrived the second week we were at Riverbend in Labelle. Riverbend has a policy (as do most campgrounds) of “no working on your vehicles in the sites”, but after I asked around there would be no problem if I took the Odyssey over to the maintenance area where they even had an air compressor and tools. As it turned out though, the time just slipped away and I didn’t get to it there. Finally, during a nice cool and pleasant day during our recent stay at Rainbow Springs State Park I decided to tackle the project. Our site there was real private and I don’t think there was any sign of my repair project.

While I knew the job should be fairly easy there is always Murphy’s Law. And there were two things that I knew of that could easily make the job long and arduous. One issue might be the two #3 Phillips head screws Honda uses during production to hold each rotor in place – they often seize and then the heads strip when you try to get them out. Another issue might be getting the old rotors off without a special wheel puller. I did anticipate these potential issues and stocked up with the parts and tools I might need to resolve them.

But before we get to that, first I had to jack up the car and remove the wheel – I had only the light duty emergency  jack that comes with the car so I did one wheel at a time. The lug nuts where on super tight, some grease monkey had probably over torqued them during a tire rotation – you should have seen me standing on the lug wrench and jumping up and down to get them loose!  Phew, that was a lot of work and probably the hardest part of the project! Since I don’t have any jack stands, once the car had been cranked up enough to get the tire off the ground, for safety, I propped everything up with a couple of 8″ x 8″ timber blocks I keep on board. 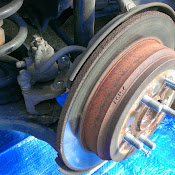 So now the wheel/tire is removed and the next thing I need to do is remove the two bolts holding the caliper in place so I can get the caliper out of the way. That went fairly smoothly with no problem getting out the bolts. There was even a nice spot on top of the suspension arm to rest the caliper out of harms way without straining the hydraulic hose. OK, so now it’s finally time to get the rotor off. To address the potential issue of getting out those Phillips head screws, I carry on board an impact driver – that’s a screwdriver like tool you hit with a hammer that rotates on impact. That pushes the bit firmly into the screw head while simultaneously twisting it loose. Ahead of time I had also purchased a few extra #3 Phillips driver bits because I knew they were likely to break, and I bought extra screws from a Honda dealer to replace the ones that I thought I was certain to destroy in the process of taking them out.

As I prepared to remove the screws on the first wheel I had a rare burst of intelligent thinking. I also have on board a battery powered impact driver. I had always used this for heavy duty wood screw driving and things like that, but why not for this project? This tool is similar to a drill, but similar to the manual hammer style impact driver, when it encounters high resistance it employs a rotary hammering action that greatly increases the torque (it’s different than a hammer drill that moves the bit up and down). 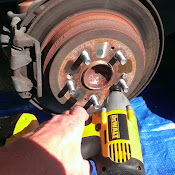 What the heck, it’s worth a try! I loaded up a fresh #3 bit and gave it a whirl pressing the tool firmly and squarely into the screw head. The screws came out instantly with almost no effort – wow! Probably should have tried this tool on the wheel lug nuts too! 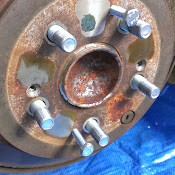 Now the rotor is free, but as expected it isn’t just going to fall off, there is rust and heat expansion/contraction going on so it is going to need a little persuasion. Normally now would be the time to get out the sledge hammer and/or wheel puller, but conveniently Honda provides threaded screw holes in the rotor for just this purpose – tighten some bolts into those threads and they will press against the wheel hub and pop off the rotor. With a couple of previously purchased M8 x 1.25 x 25mm bolts, I lubed up the rusty threads in the rotor with some WD-40 and proceeded to tighten them down. Ping! the rotor came off with almost no effort, so far so good! 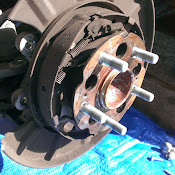 With the rotor off, now I can see the guts of the parking brake. Yep, no brake lining left on the shoes! 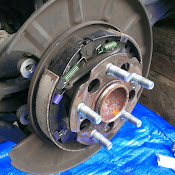 Otherwise though all the parts looked intact. I studied it for a while and took pictures to make sure I knew how to get the springs and adjuster oriented correctly. The parts kit I had purchased included all new springs, shoe clips, the star wheel adjuster, etc. Even some grease. Took about a half hour fiddling around to get it all put together correctly, the second one was completed in about half that time. I adjusted the shoes 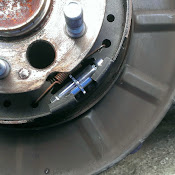 so they were just barely touching the inside of the drum. By the way, the rotor has a removable rubber plug that will make future adjustments of the parking brake pretty easy – only the wheel/tire needs to be removed. 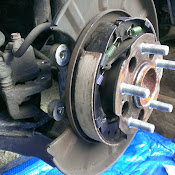 OK, so the new rotors are now installed, the old Phillips screws tightened back down (first I put a little grease on the threads for future consideration) and it’s time to replace the disc brake pads. These are just held in to the caliper with clips and came out easily. The caliper piston and rubber boot looked fine and there was no sign of leakage. I used a screw clamp to force the piston back down into the caliper so the new brake pads had enough room to fit. Pushing the piston back forces the hydraulic fluid back up into the brake fluid reservoir. 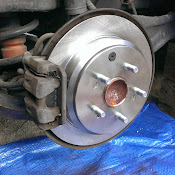 FYI, unless you have a leak you shouldn’t normally add brake fluid to the reservoir as it could overflow when replacing the brake pads – the fluid level in the reservoir becomes an indicator of how worn your brake pads are.

The clips, boots and other parts were dusty but looked to be in good shape. I just cleaned the clips and added a little grease before slipping in the new pads. Easy! Now all I had to do was replace the caliper and tighten up its bolts! 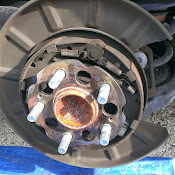 After reinstalling the wheel/tire I repeated the process on the other side. That went more quickly because I knew better what I was doing. The only problem I ran into on that side was the new rotor did not seem to be true – I could see it wobble when rotated – that’s not good! I pulled it off again and cleaned off some rust and scale on the wheel hub. When I reinstalled it I gave those Phillips screws some extra torque from the impact driver – ping! the rotor finally seated itself correctly and was running true!

Yippie, major project out of the way! Total elapsed time from start to finish was about 4 hours including clean up. The old rotors will be recycled at a scrap yard. Next time I get ambitious and have a good working environment I’ll replace the rotors and pads on the front wheels too, that will be much less complicated and should be relatively easy.