Sunday dawned as a bright sunny day with the promise of temps in the comfortable mid to high 60 degree range. A perfect day for a road trip to

a place we had heard about from a number of people including Margery & Paul of the Living Our Dream blog. Our destination today (in the Odyssey) would be Tarpon Springs, the “Sponge Capital of the World”, about a 45 minute drive from Wesley Chapel.

We had read that finding a free parking spot on the street after 11:00 a.m. would be difficult (thanks, Margery & Paul) so after a quick breakfast on the coach, we were on the road around 9:45 a.m. Following State Road 54W, it was a

pleasant drive through the countryside.

Oh, oh, we mumbled as we entered Tarpon Springs and spotted a sign for an Arts & Crafts Festival on the

Sponge Docks for that weekend. Perhaps it will be crowded and not a good time to go there. But our fears quickly dissipated as we arrived near the Sponge Docks. Yes, there were canopied booths set up in the middle of the street but there weren’t many people yet. Luckily it didn’t take long for us to find a parking space on the street nearby.

As we walked toward the docks, we passed by shop after shop with outdoor displays of sponges. Wow, I’ve never seen so many varieties of natural sponges, in every shape

and size possible and that was just on that little side street!  Before walking through the festival area, we strolled along the water, looking at the boats.

Located along the Anclote River where the river meets the Gulf of Mexico, Tarpon Springs has a rich history. The discovery of sponges

happened accidentally in 1873 off the mouth of the Anclote River when sponges snagged in the nets of turtle fishermen. Spongers came to the area to work the beds and some permanently relocated to Tarpon Springs. During the 1890s, sponge-packing houses were built in

the city, sponge presses were installed and buyers moved to town. Gradually the sponge business shifted its center from Key West, Cuba and the Bahamas to Tarpon Springs. By 1900 the city was considered the largest sponge port in the United States.

panding and refining the industry. By 1948, the sponge business was flourishing with a fleet of 180 sponge diving boats. It was booming until the red tide wreaked havoc on the 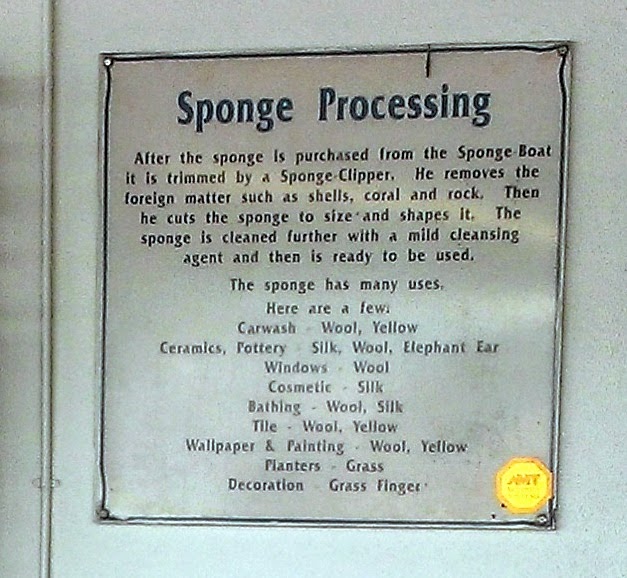 sponge beds in 1948 killing many of the sponges as well as other sea life. By 1959 sponges slowly returned, reaching full strength in the 1970’s.

Although tourism has replaced sponging as its major economic activity, there are still professional sponge divers who search the waters off the coast of Tarpon Springs, as deep as 150 feet, for sponges which are sold all over the world. Most of the sponge boats as well as the many restaurants and shops are owned and operated by the

descendants of the first Greek sponge divers. If you want to learn more

about the history of sponge diving and see a demo by a diver harvesting sponges, there are several tour vendors that offer short narrated boat cruises. On this our first visit, we didn’t want to take the time. Maybe next time.

es for painting, sponges that can be used as planters or for anything else you can imagine!

Not interested in sponges? Well, how about hand made soap, made from olive oil or goat’s milk or perhaps a black soap from Ghana made from the ash of plants, bark of plantains, cocoa pods and palm leaves?

offerings at the festival and the shops of handcrafted artwork, metal garden sculptures, specialized jewelry, handbags, neat 3D cards or the goodies offered at the Village Spiceman are of more interest? Rob was very amused by the labels (especially the coffee – see photo below) on some of the products.

By noon, we were getting tired of walking around and hungry so we headed to Hella’s Greek Bakery & Restaurant

which had been recommended to us by several people. What a neat place! Luckily it was early so it wasn’t crowded yet so we were seated right away inside. After

studying the very extensive menu for a bit, we both ordered the Hella’s Gyro (pronounced Yee-roh), which according to their menu is “a unique blend of beef and lamb, finely seasoned, broiled and serve wrapped in a pita with sliced onions,

tomatoes and a delicious tzatziki sauce”. We decided to split an order of fries. Stupid us! The Gyros were huge – certainly didn’t need the fries! Delicious and very reasonable for $7.50.

eating, the couple next to us ordered Saganaki, a flaming cheese appetizer. The cheese is melted in a small frying pan until it is bubbling, then flambéed at the table. When it is served the wait staff yell “opa, opa”, chiding everyone to yell it as well. Looks like another visit will be a must so we can try this! Next time we will split a Gyro and get the Saganaki!

Even though we were pretty stuffed from the Gyros, our waiter, Rob (nice name and what a great salesman), brought the dessert menu. Menu? Hah, it was 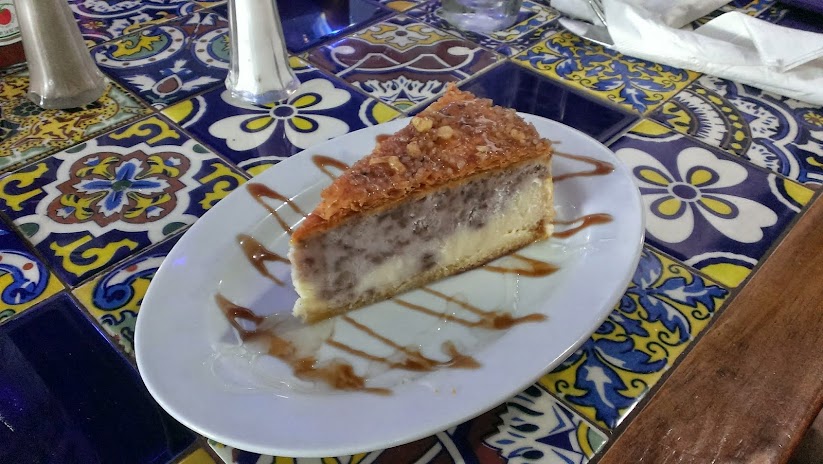 more like a book! At his recommendation, we ordered the baklava cheesecake to share. Good thing we were sharing – it was a pretty big slice. But oh, my it was a

By the time we left, the restaurant and bakery were mobbed but we were able to push our way through the bakery gawking at all the goodies. What a selection!

I think I gained weight just looking at them! Later we ended up buying a pre-packaged assortment of pastries to take home with us.

After lunch, to work off all those calories we had just consumed we continued to walk the now very crowded streets, stopping briefly to enjoy a couple of musicians, then

eventually stopping at the “Spongeorama”. As we entered, a woman directed us into a room where they were running a continuous video about the different types of sponges and how they are harvested and processed. Not exactly a high production film but pretty informative, I learned all sorts of facts about

sponges. Roadside America describes the video in this interesting article. After the video, we strolled through the gift shop, looking

at all the sponges, shells, Greek gifts and soaps. I was surprised to learn that loofah sponges are not really sponges at all but are dried fibrous parts of the loofa vegetable. Who knew?

On our way back to the car, we passed by a booth where a man was giving a demo of a ceramic grater plate which came with a garlic peeler and a little brush. Funny guy! Being one who hates peeling or grating garlic or ginger, I was a real easy sell. Haven’t used it yet, hopefully it will be as easy as he made it look.

By now, it was late afternoon so time to head back to the hacienda where we spent a quiet evening. The next day would be another travel day to yet another destination. More to come! 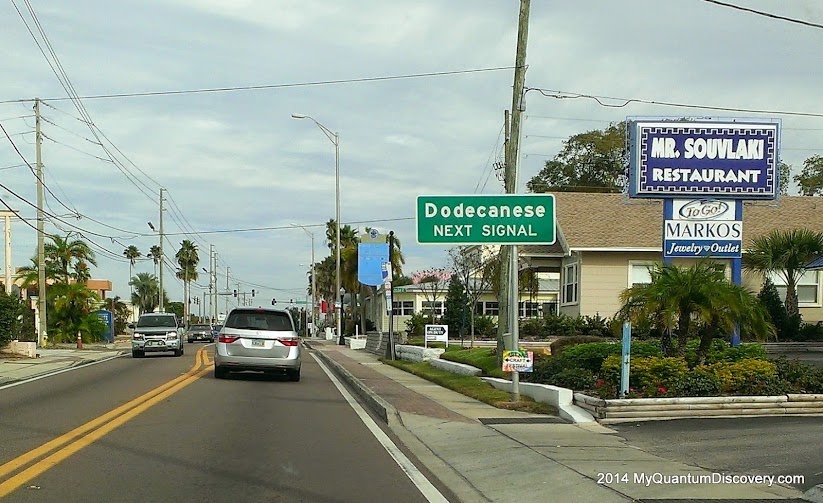 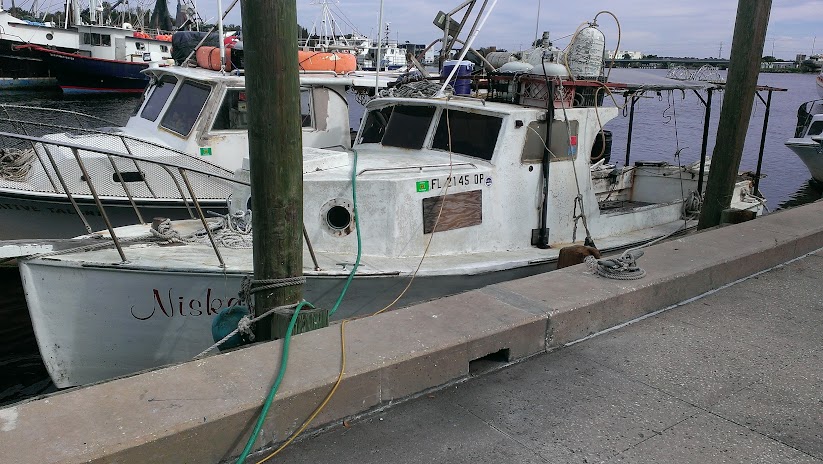 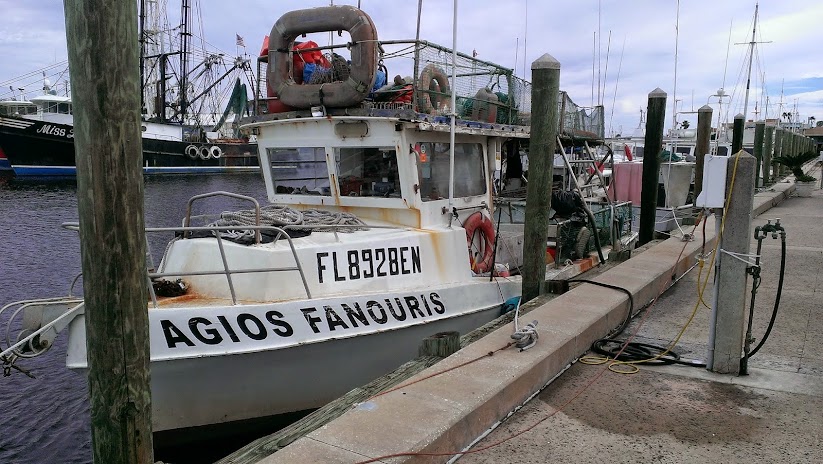 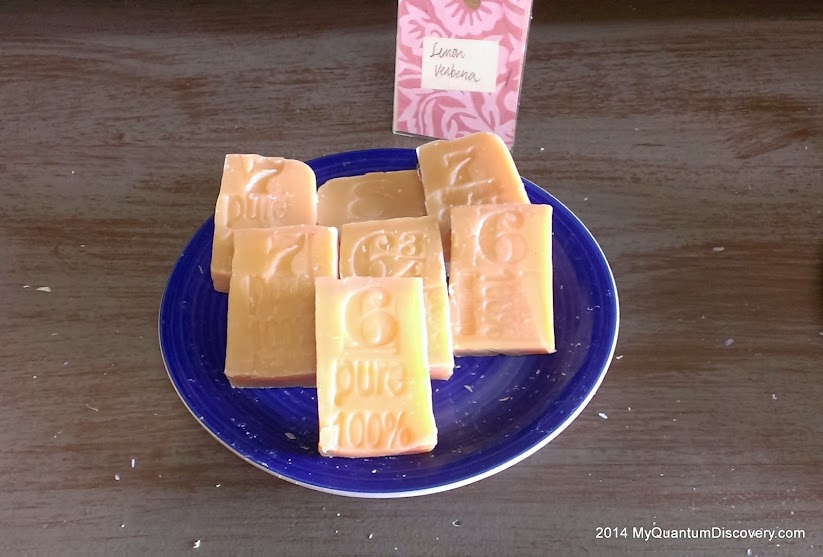 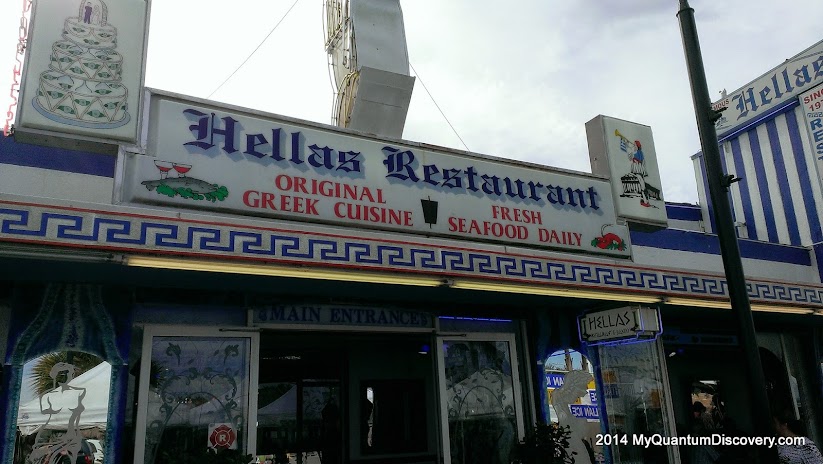 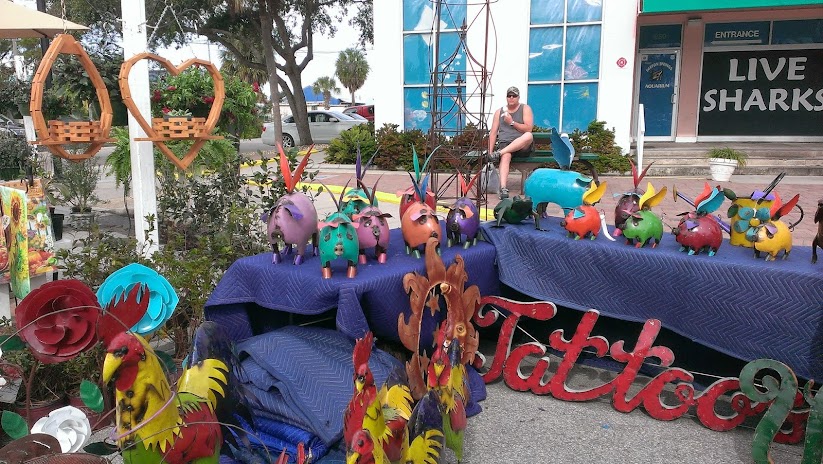 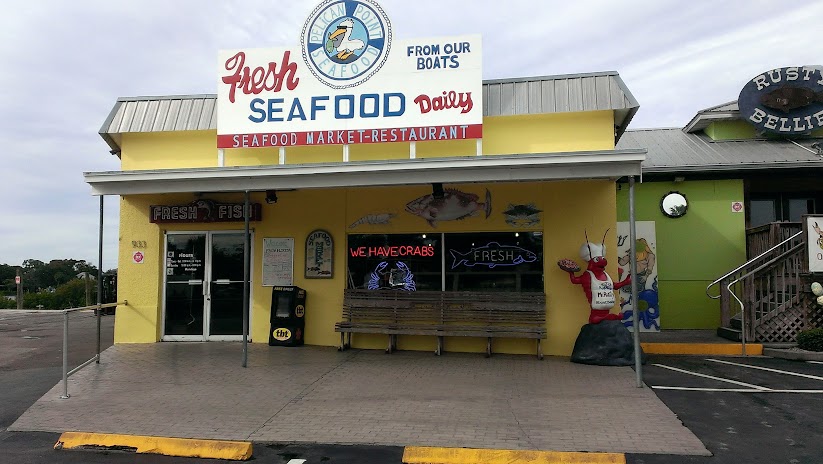 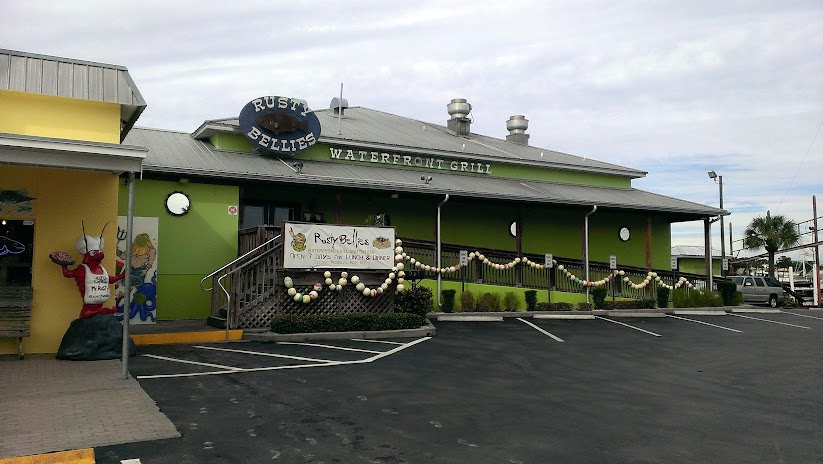 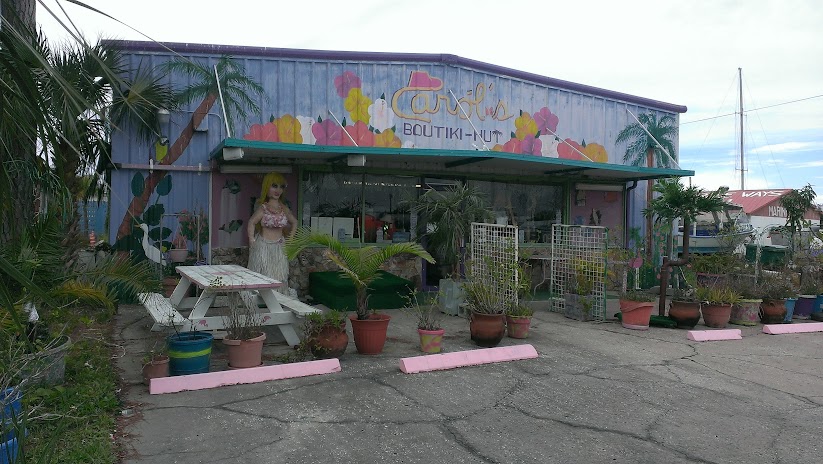 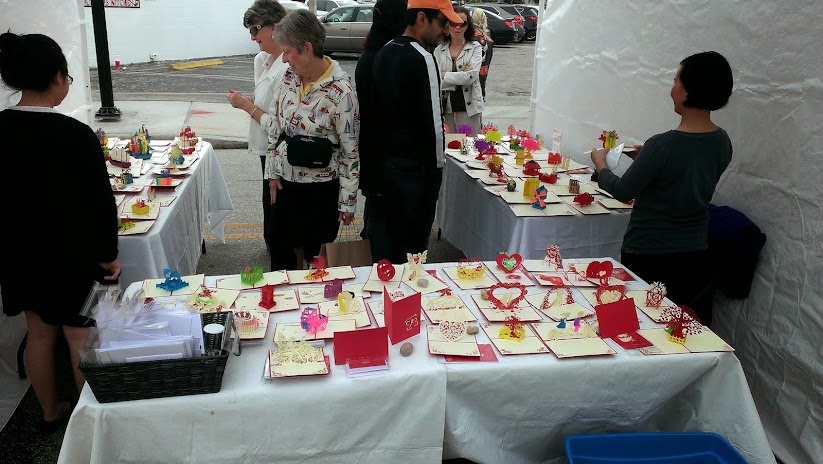 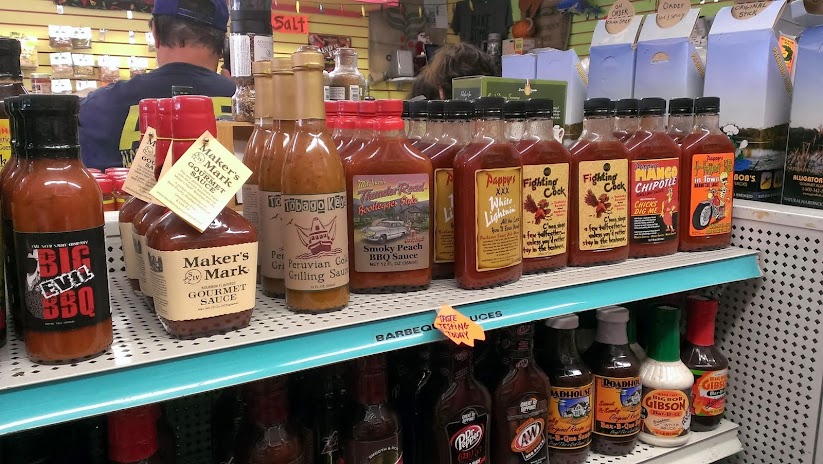 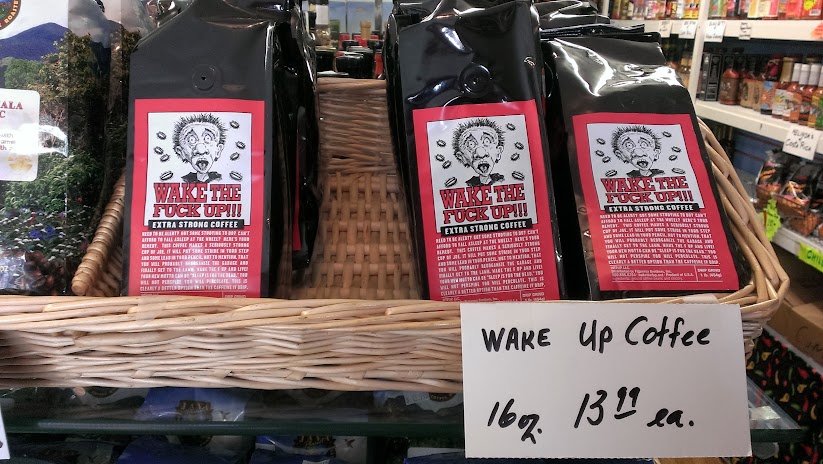 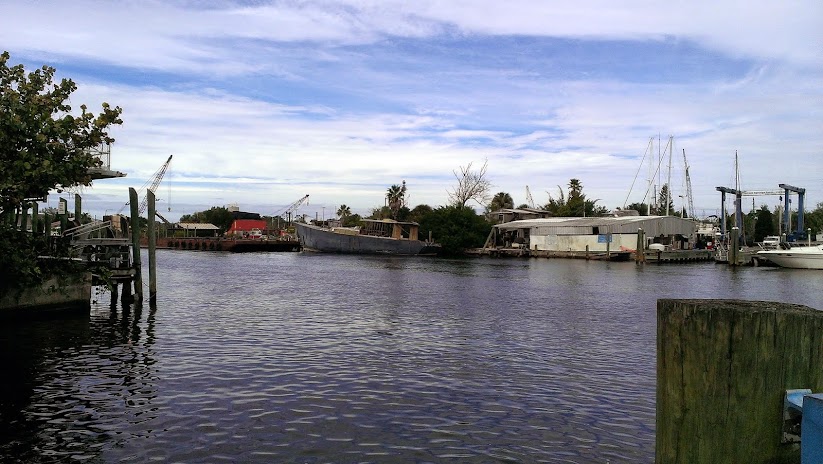 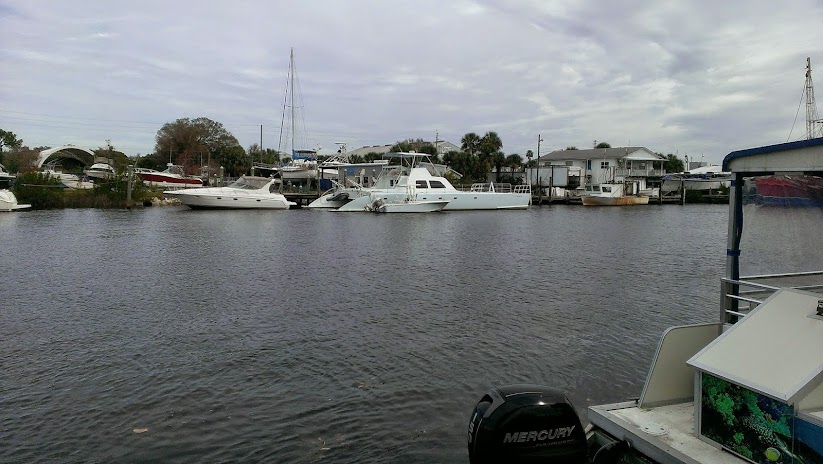 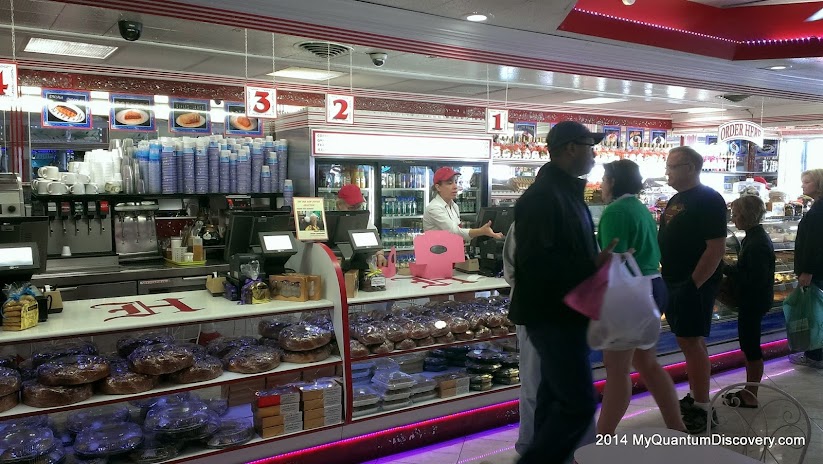 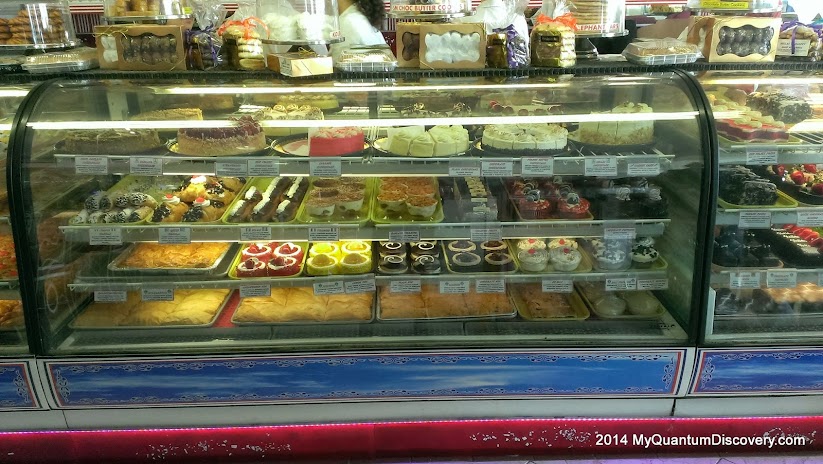 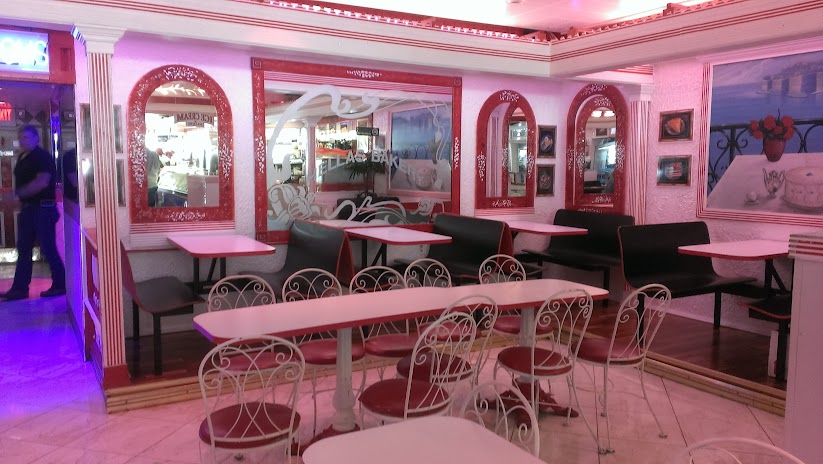 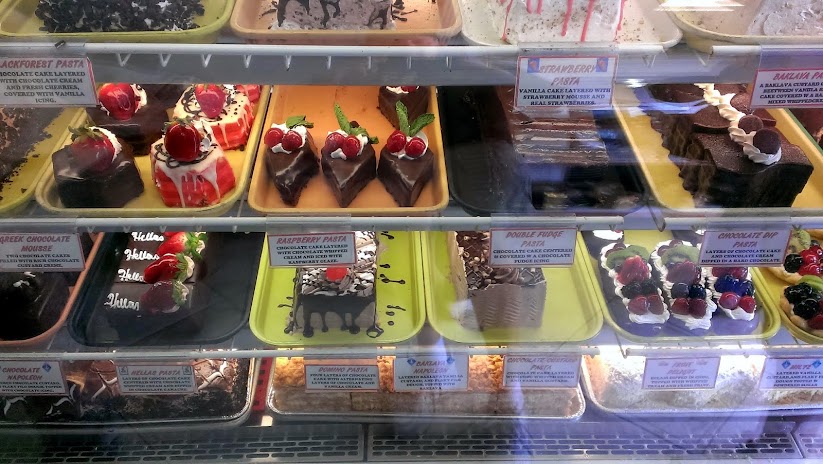 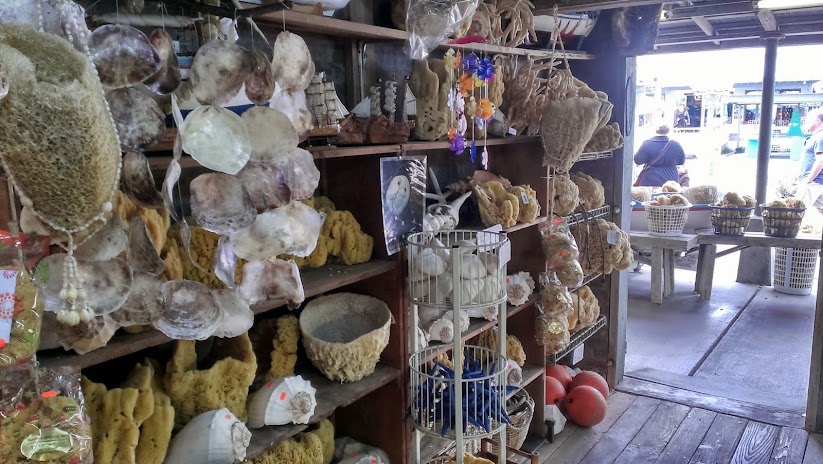 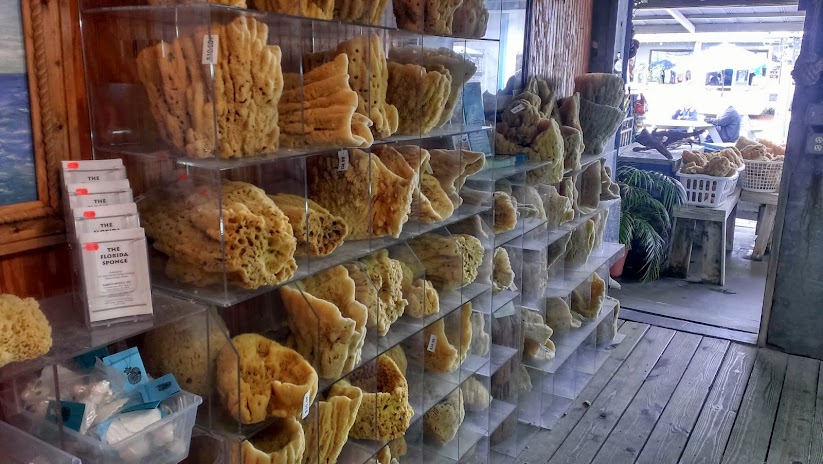 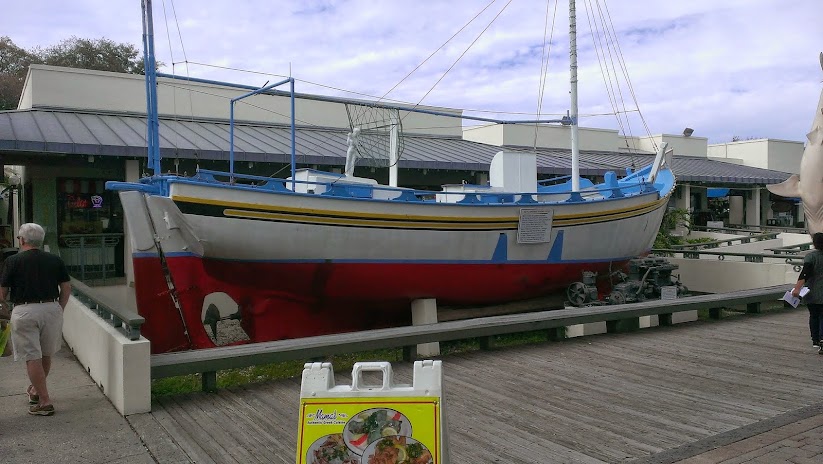 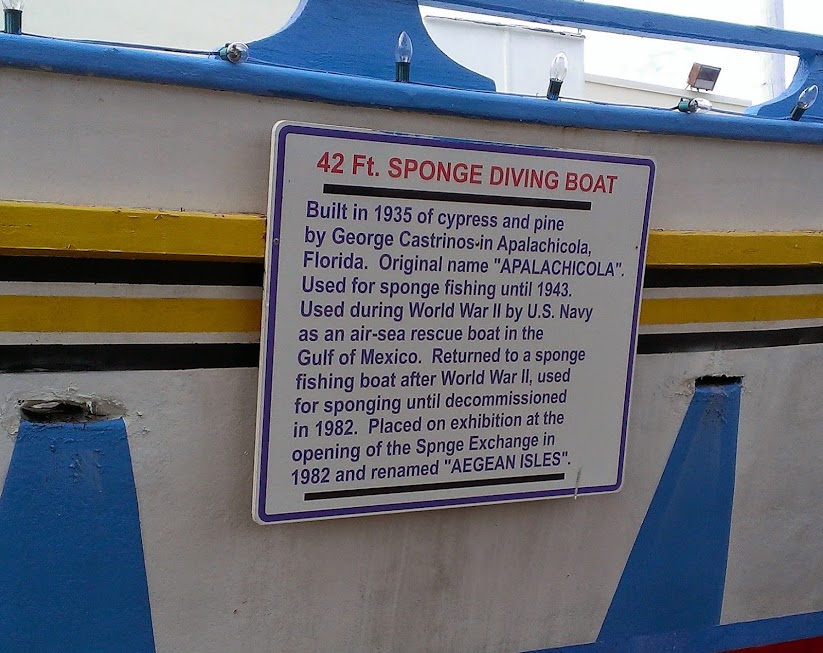 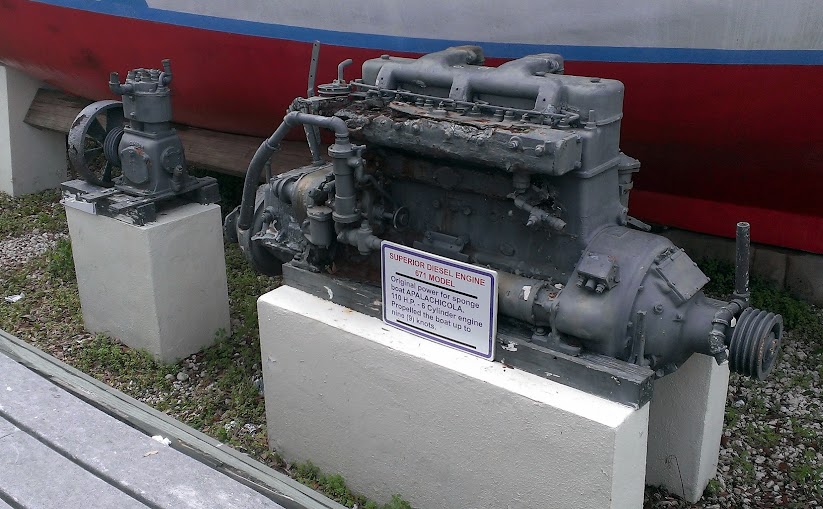 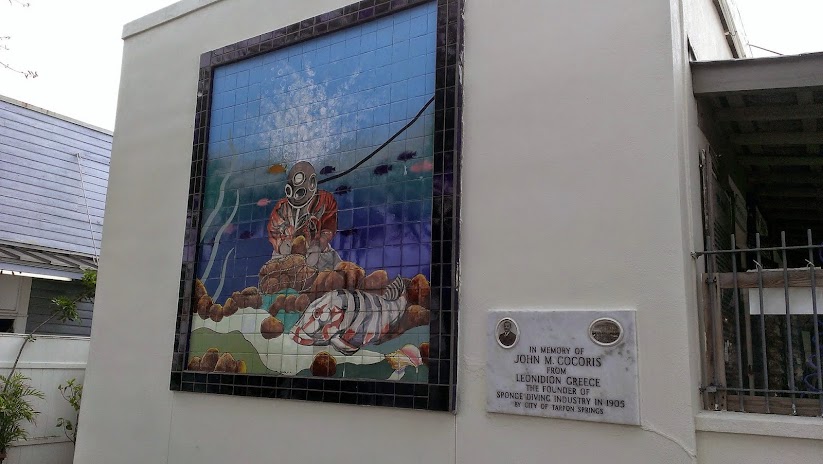