Leaving Skidaway Island State Park in GA, we had no reservations for our next stay although we had narrowed it down to either Swamp Fox in Florence, SC or Camp Pedro at South of the Border in Hamer, SC.  We were leaning towards Swamp Fox because it is a Passport America campground with advertised rates of $22.50-$27.00 (50% off what PA shows as their normal rate of $45 – $54). The daily rate at Camp Pedro was $32.00 but with tax and the Good Sam discount the total would be $32.33.

I called Swamp Fox to make sure that a site would be available and was assured that it wouldn’t be a problem. The campground was listed as big rig friendly but big rigs, be aware, the U-turn required at the access road on approach from I-95 was just barely manageable in our 45′ motorhome! 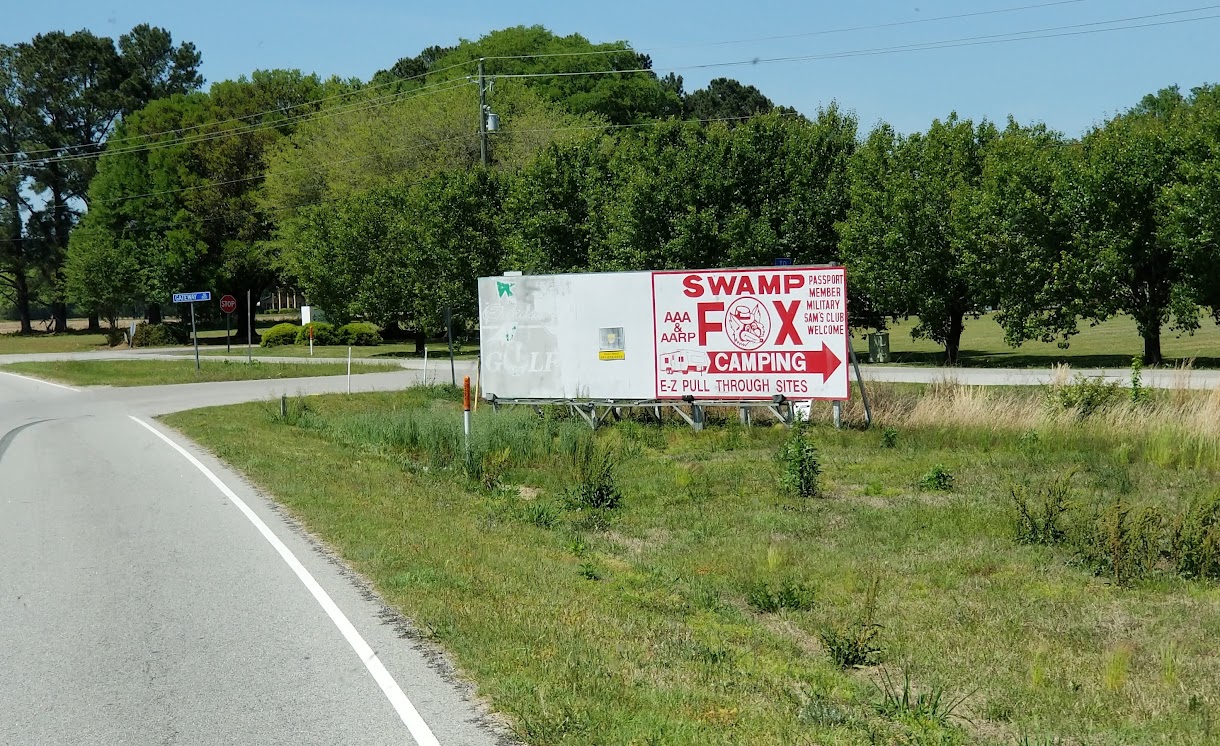 At check in, we were told that the PA rate was $31, obviously higher than what was advertised on the PA website. When we mentioned the fact that the rate didn’t match the lower PA advertised price, we were told that was the PA rate that was written down on the rate sheet at the desk. He couldn’t change it but if we had an issue with it, we could wait until the owner who was out running an errand returned. Not knowing how long it would be before that happened or whether he would honor the PA rate, we decided we didn’t like the looks of the campground and the overall vibe of the place anyway so we left. Was this a case of a “bait and switch”? Not sure but guess we’ll cross this campground permanently of our list of future overnight stops!

Time for our backup plan! Despite all of the miles and miles of amusing (at first) signs, we were favorably impressed (given our low expectations) with Camp Pedro when we stayed there in 2015. And fortunately it was only another 45 miles and we were told that they had availability. At check in, we were assigned to a 50 Amp pull thru site (#174) just a few sites down from our 2015 site. 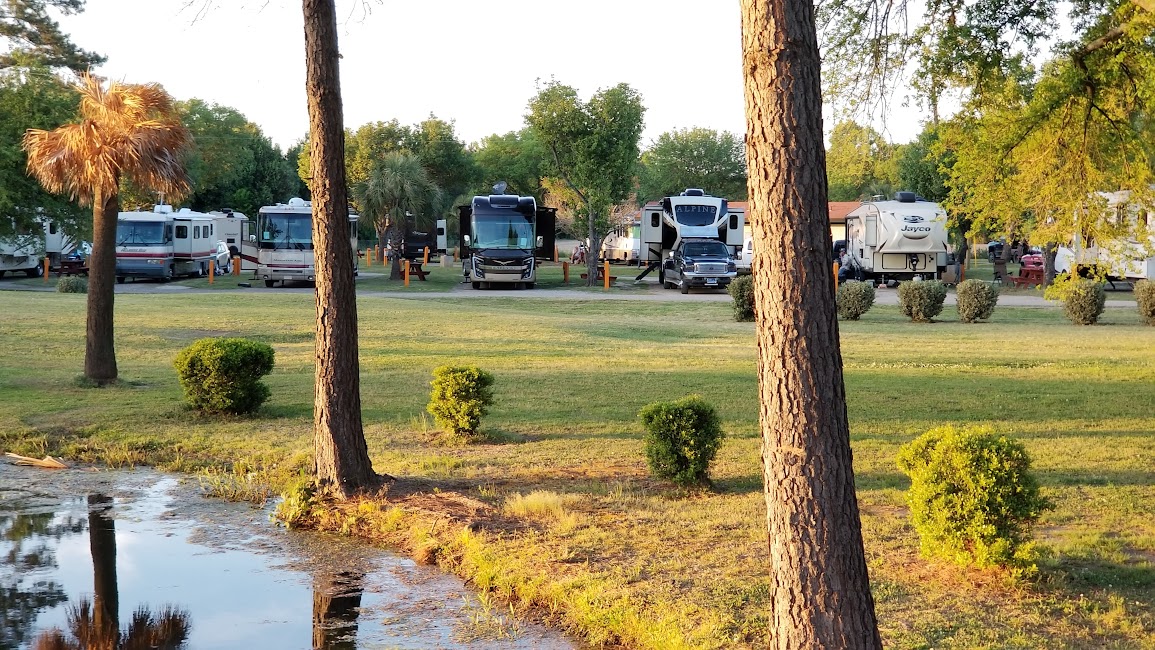 Except for taking a short walk to snap a few photos, it was a quiet night.

Pocahantas State Park in Chesterfield, VA (20 miles south of Richmond), was our next destination, a longer than usual drive for us of 260 miles, about 4 hours. We had booked a three night stay through Reserve America on pull thru site #68. 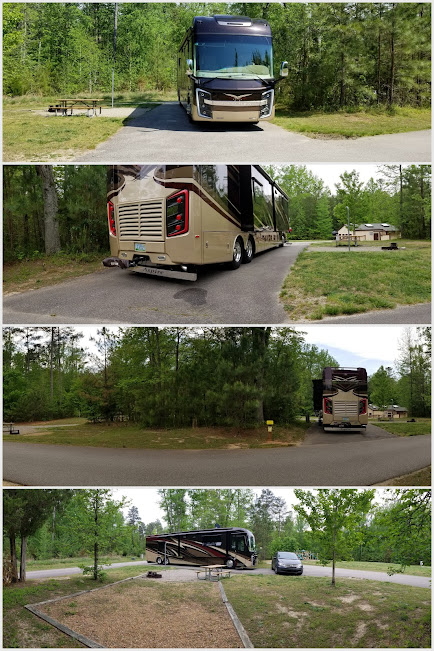 Besides campsites, the park offers cabins and yurts, 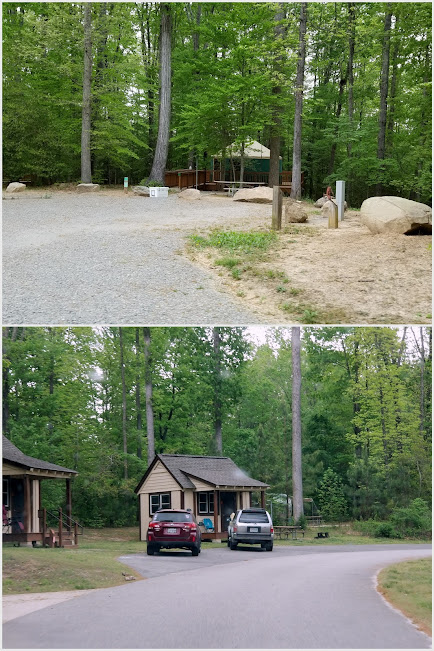 We didn’t do any sightseeing in the area during our brief three day stay here, unusual for us. The only excursion we took outside of the park was our usual quest for breakfast on the first morning. A 30 minute drive to Midlothian would take us to the Brick House Diner where we had a decent breakfast. That was followed by an exciting visit to the local Walmart to stock up on some supplies. 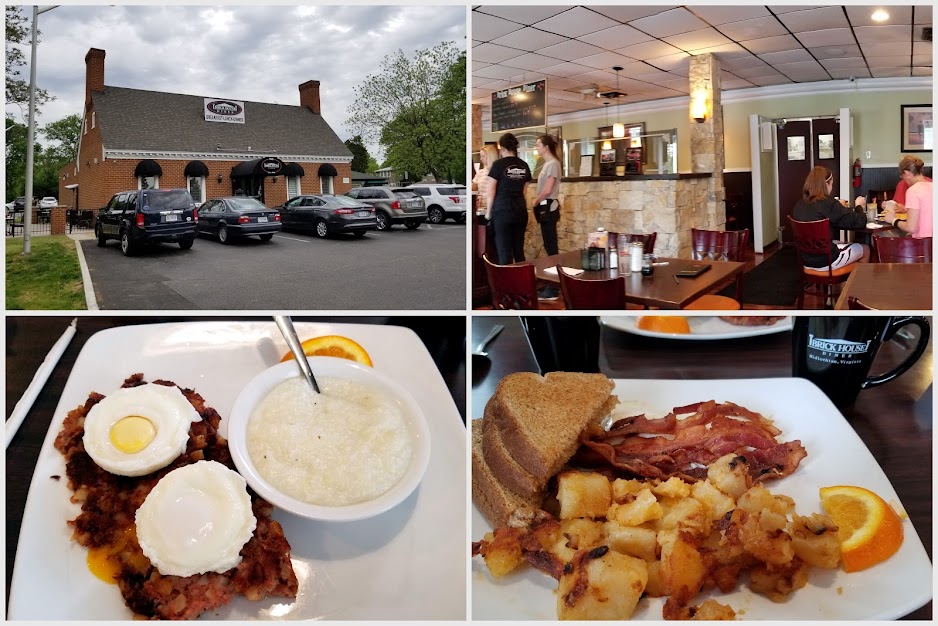 Besides that, there were a few short walks and a drive or two around the campground. We were surprised to see that they have double and triple “Buddy” sites, fantastic if you are traveling with other RV’ers.

That was followed by a visit to the Visitor Center which houses both a Nature Center and a Discovery Center. 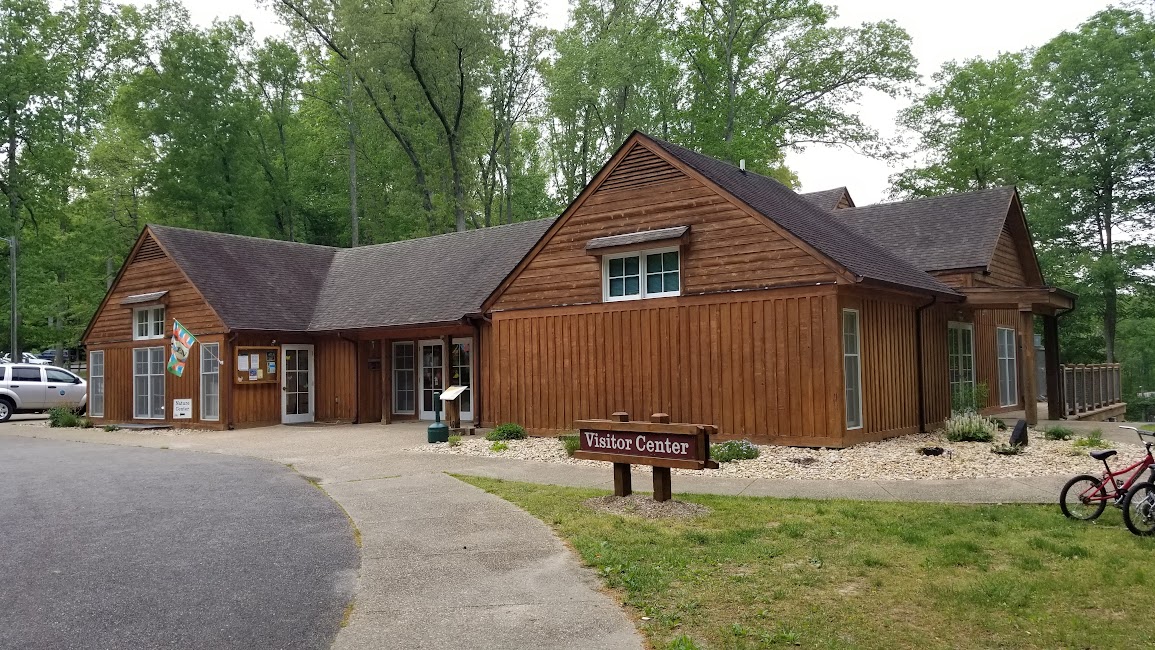 The Nature Center allows visitors to get up close and personal with some of the critters that call Pocahontas home. 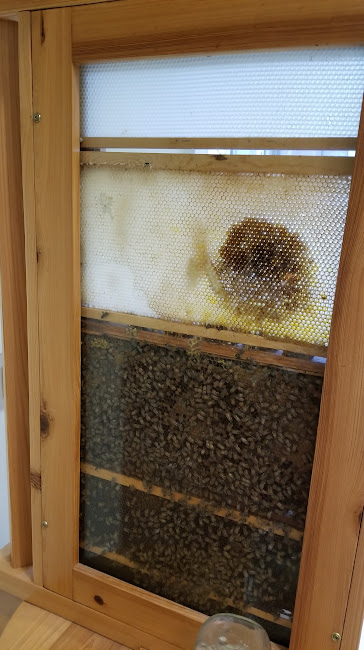 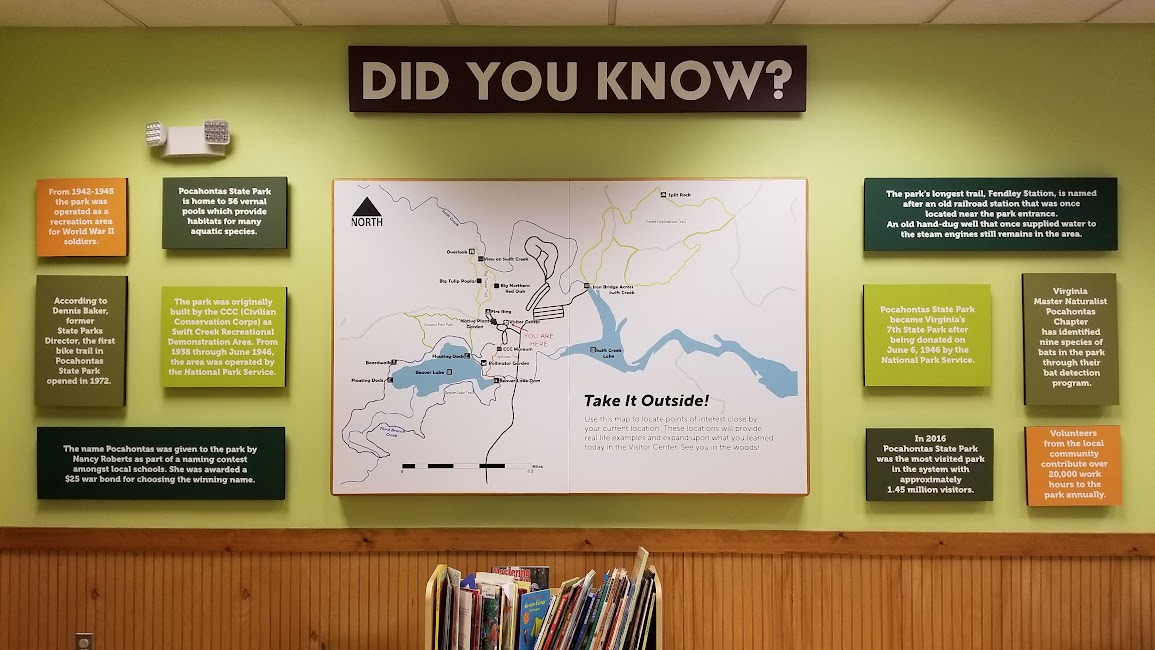 The Discovery Center allows visitors to catch a glimpse of what the park offers through interactive playscapes. Interesting exhibits not only for us adults, but also an entertaining and educational place for kids!

We were so busy that we didn’t manage to find the time to visit the free Civilian Conservation Corps (CCC) Museum located in the park in a building constructed by the CCC. From what we’ve read, there are exhibits of photographs, artifacts and personal mementos which explains the history of Pocahontas State Park, the Virginia State Park System, and many of the outdoor recreation areas now available all over the country. Although it probably would have been interesting, several other campgrounds and attrations we have visited have had CCC exhibits, so it probably wasn’t a big deal passing this one on by.

We usually love state parks. Love being outdoors, enjoying nature, watching the wildlife, taking long walks on the trails and sitting around a campfire at the end of an exhausting day of sightseeing or hiking.

But although this park had a lot to offer, for some reason, it never made its way to the top of our favorites list. Strange because most of the reviews on rvparkreviews were pretty favorable so why weren’t we as impressed? Perhaps it was because we weren’t crazy about our site which can sometimes make or break your impression of a park. Perhaps it was because while we were there it was cloudy and dreary, as well as hot and humid, encouraging us to spend more time indoors getting caught up on things instead of exploring the outdoors. Perhaps it was because we didn’t do much of anything. Perhaps…perhaps….perhaps. Can’t really explain it as there wasn’t anything really “wrong” with the park, in fact it had a lot to offer – guess it was just a vibe we had. But perhaps if we stopped there again, we might change our minds.

Our next stop would be another VA state park. What would be our impression of that state park?