Needing a breath of fresh air and some time away from the city of Savannah, on the day before our scheduled departure from the area, we decided to take a ride to Tybee Island which is located approximately eighteen miles from Savannah. This 2.7 square mile island has a year round population of approximately 3,400 residents but as you can imagine in the dog days of the summer season the population swells considerably.

Guess we were lured by the description that it was a “casual beach town full of charm and personality”, and the accolades that it is the “Best One Tank Trip” by the Atlanta Journal Constitution, “Best Beach Retreat” by Atlanta Creative Loafing and “Best Beach” by Georgia Magazine. 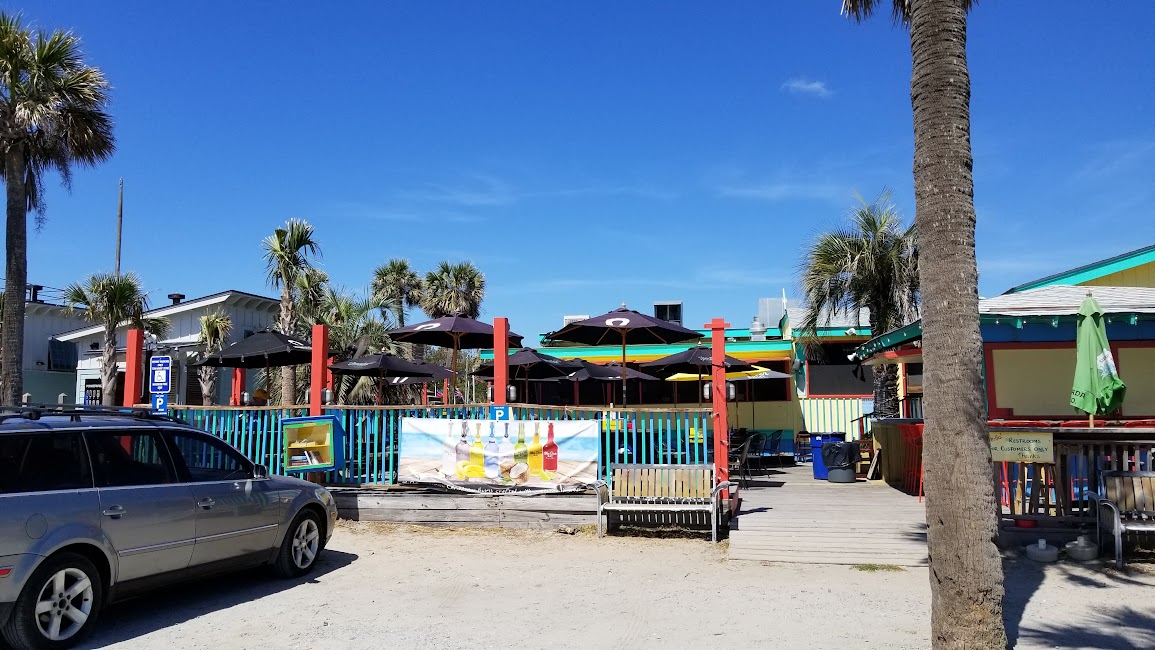 Perhaps it was the time of year, but it was pretty deserted and not much was open. Perhaps it was a letdown after experiencing such a wonderful time in Savannah. Perhaps our expectations were too high, guess we thought it would be more upscale and quaint, or a little more focused on nature.  Whatever the reason, Tybee Island wasn’t for us.

Rows and rows of older wood framed somewhat run down single, double and triple decker beach homes, crammed close together, tacky souvenir and surf shops, lower end hotels/motels and a few restaurants, none of which looked particularly appealing was what we found. If there was “charm and personality” anywhere on the island, we missed it.

Thinking it would be nice to see the “best beach in Georgia” (we couldn’t see it from the road), we pulled into a parking lot with beach access figuring we would take a quick walk to see the surf. As we started to leave our car, a man warned us not to do so without feeding the $2/hour fee to the parking meter as they were pretty strict and very quick to ticket which could result in a hefty fine. OK cancel that plan. If the meter had an option to pay a nominal fee for 15 minutes we would have done that but it’s the principal of having to pay $2 for a 5 minute peak at the ocean that bugged us. Not exactly tourist friendly in our book!

Even away from the beach, there were parking meters everywhere, some of them located in the darndest places. 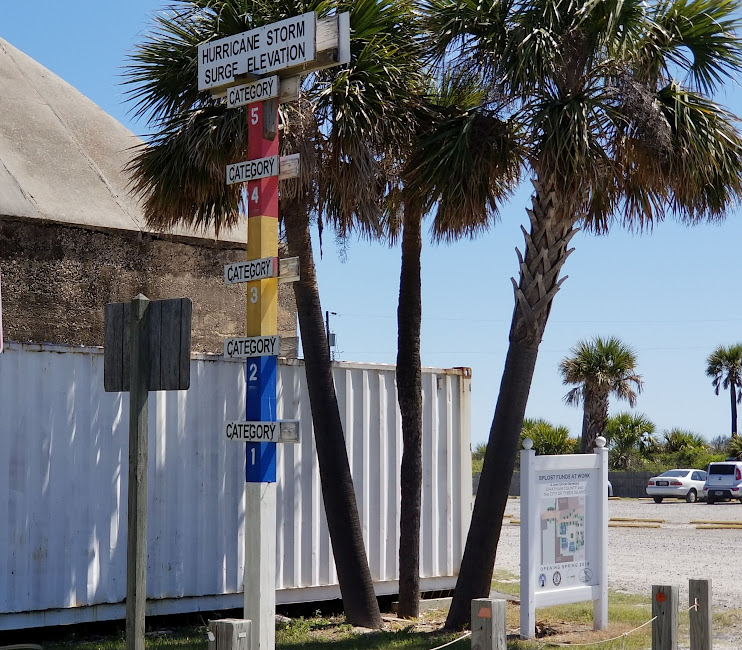 Besides the beach, we skipped one of the other popular attractions on the island – the Tybee Lighthouse and Museum, Georgia’s oldest and tallest (145 feet tall) lighthouse. 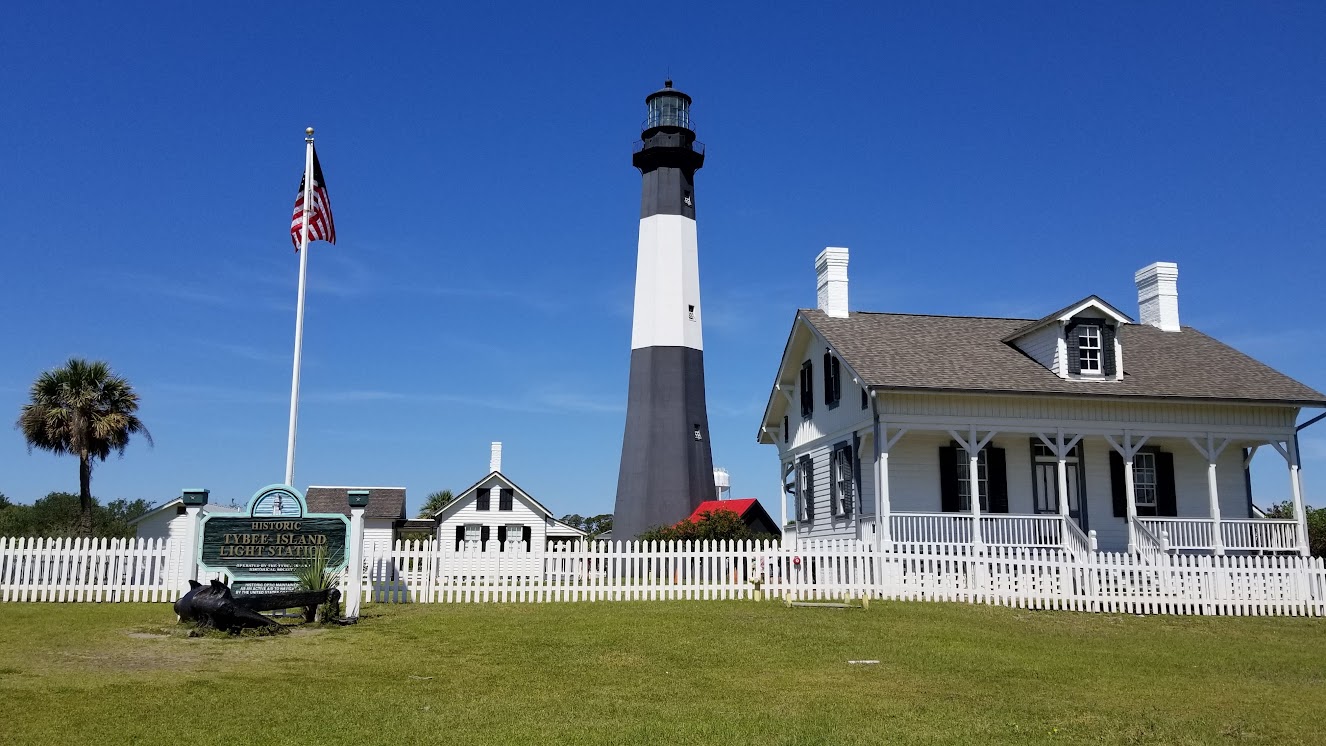 Even though the entrance fee (adults: $9, Seniors 62+ and Military: $7, Children 6-17: $7, Children 5 and under: Free) included admittance to the complete Light Station, a Tybee Raised Cottage, and the Tybee Museum in Battery Garland, since we had recently climbed to the top of the St. Augustine Lighthouse (165 feet tall), we decided to save it for another time.

After an hour of driving around, we headed back to Skidaway. Looking to salvage what was left of a beautiful day, we headed out on the 3 mile Big Ferry Trail. It was an easy walk along the level trail, under a canopy of gnarly branched live oak, palm and pine trees, all draped with Spanish moss. 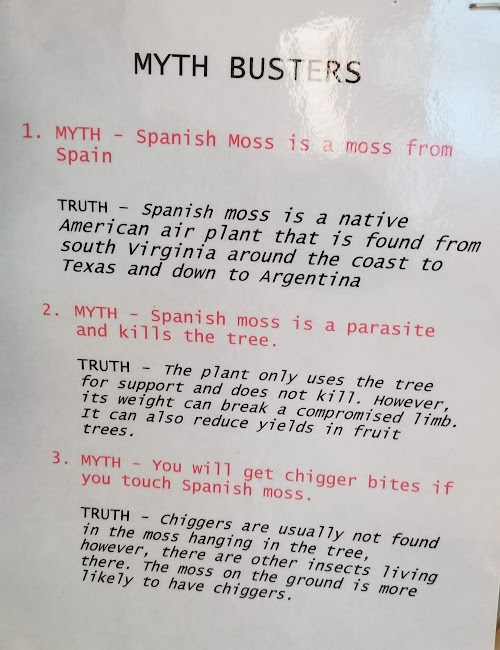 At what was labelled as an alligator pond on our trail map, we kept a sharp eye out for alligators but didn’t see any which is not necessarily a bad thing.

After about 1/2 mile there was a boardwalk which led out to a wooden observation tower where there were sweeping panoramic views of the salt flats and marsh that border the Skidaway Narrows. 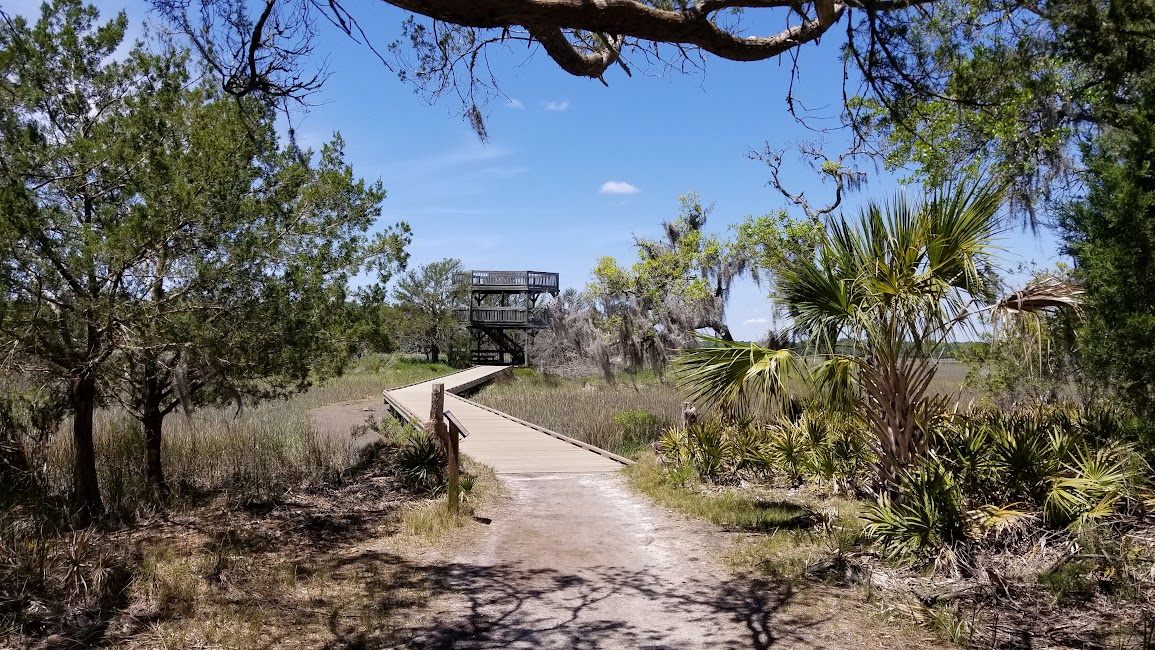 Tiny fiddler crabs were scurrying every which way across the sand. As you can see from the video below, they are quite fascinating to watch.  These crabs are recognized by their one large claw used by the male for defense and for attracting a mate.

Continuing on, a sign identified an area known as a shell midden. Beginning 3000-4500 years ago, Native Americans consumed lots of shellfish, creating huge mounds of discarded shells. Because shells have a high calcium carbonate content, the middens are alkaline and not as acidic as the surrounding soil which allows some plants to thrive on the old shell mounds. An example of this is the Southern Red Cedar which is scarce elsewhere on the coast. Cedars like the limey soil created by decaying oyster shells. 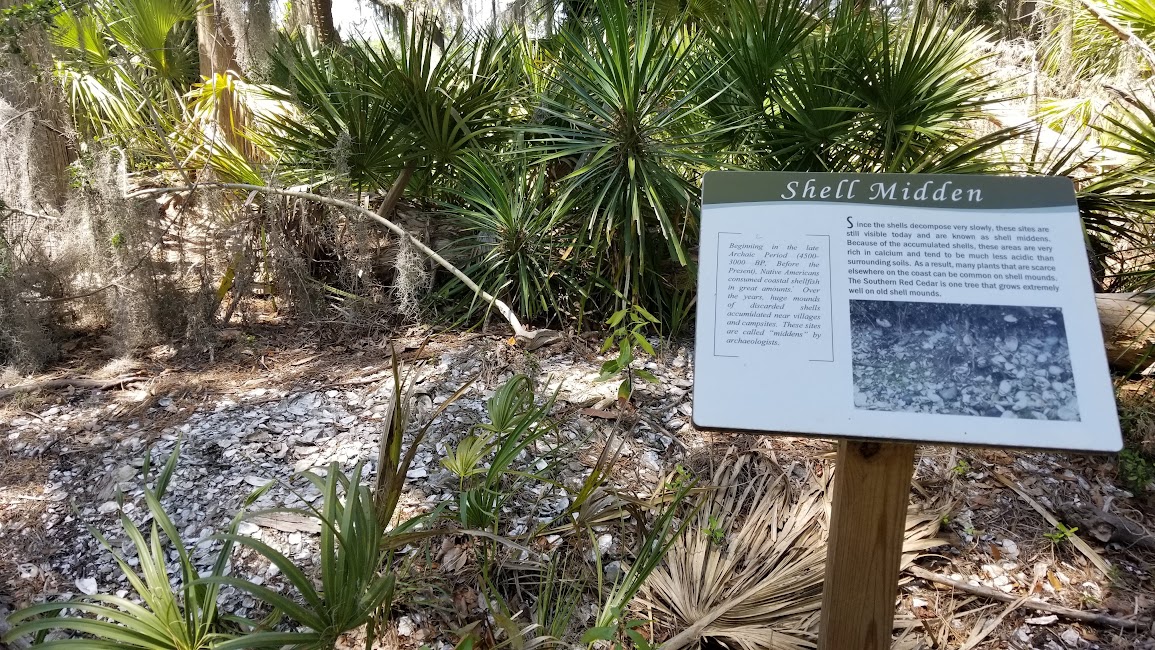 Instead of continuing straight towards what was designated on the map as the earthworks (mounds built by slaves during the Civil War as part of the defense system against Union Troops), we veered right on the trail wanting to see the rusted remains of several prohibition-era moonshine stills.

In the 1920’s and 1930’s, the island was a venue for the illegal manufacturing of liquor, thanks to its remote, secluded location. Moonshiners would take corn or grain, ferment it, and then heat it up in a boiler, causing alcohol to be vaporized out and into the coils of the receiver. According to park records, approximately 30 former still sites are known in the park. Illegal liquor production continued on here until the first bridge was built in the late 1960’s! 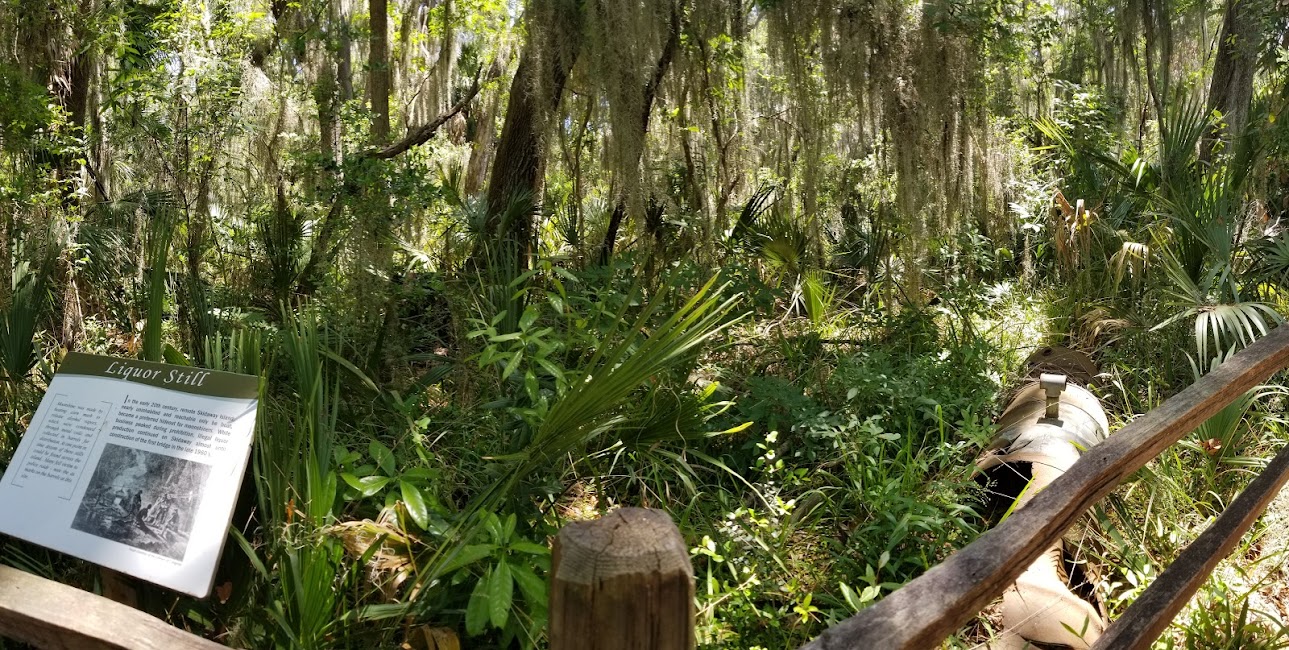 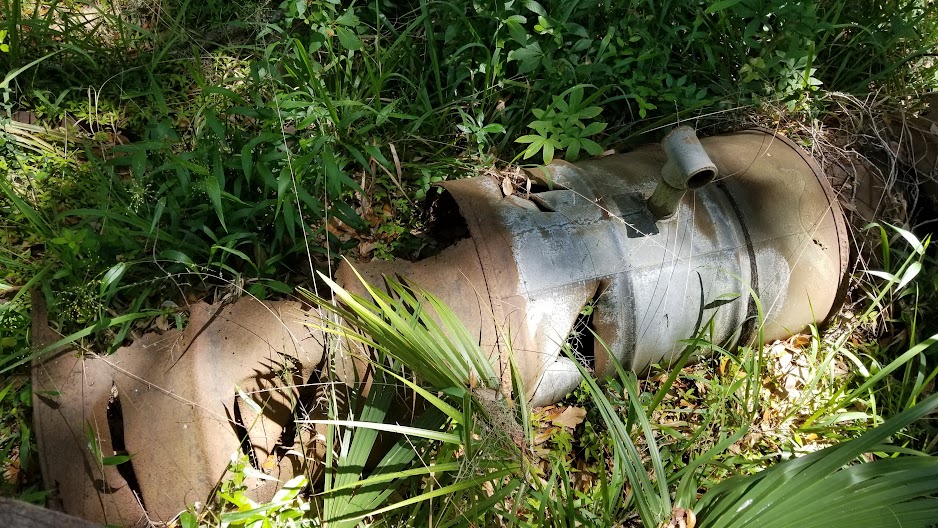 Before heading back to the coach, we stopped at the interpretive center where there were numerous displays about the local animals and birds.

Most interesting however was the replica of a Giant Sloth measuring 25 feet long, 20 feet tall, weighing over 6000 pounds and believed to have inhabited the Savannah area two million years ago. It consumed 600-700 pounds of vegetation a day! Although the display was a replica, the original bones were found in 1822 by a slave on a Skidaway Island plantation. The original  bones are on display at the Smithsonian Institute in Washington D.C. 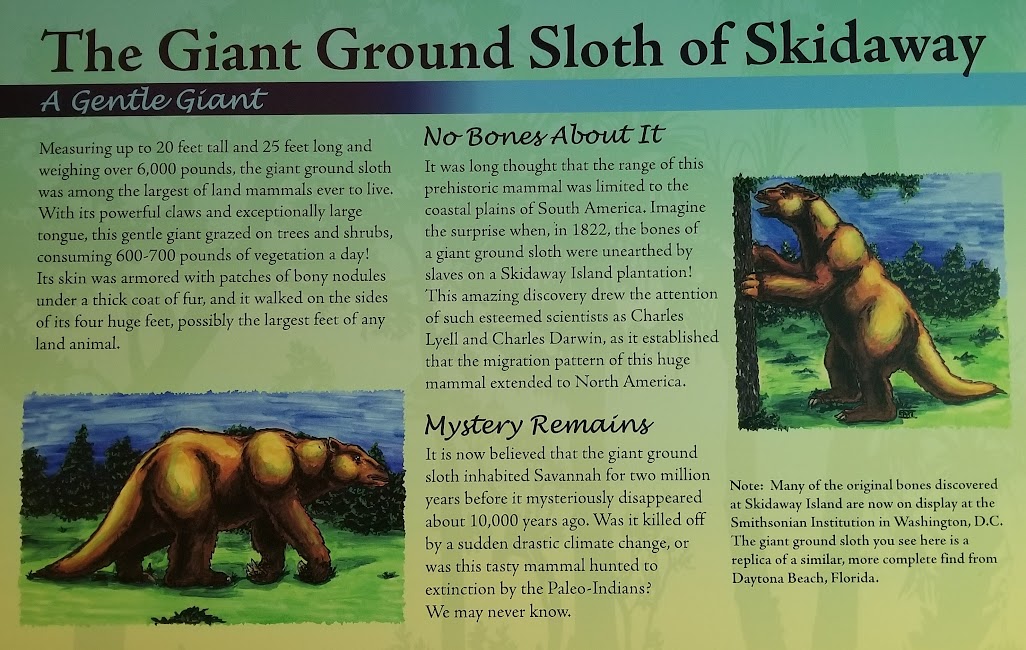 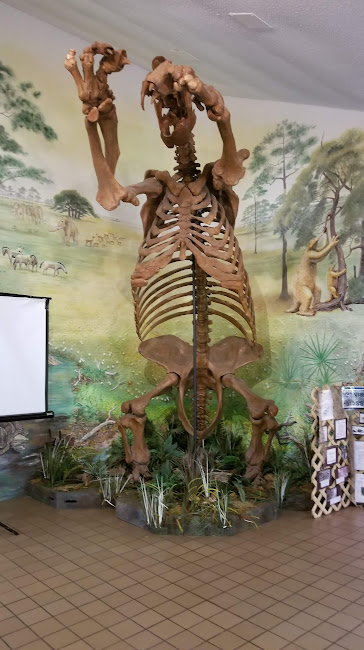 Still not done for the day we couldn’t resist walking the Sandpiper Trail Loop. This one mile trail meanders its way over salt flats and tidal creeks and through maritime forests on island hammocks. Because they are slightly elevated, hammocks provide a home for plants and animals that cannot live in the salty wet marsh. Along the way we saw dead pine trees which, according to a nearby sign, had been killed many years ago by pine beetles. 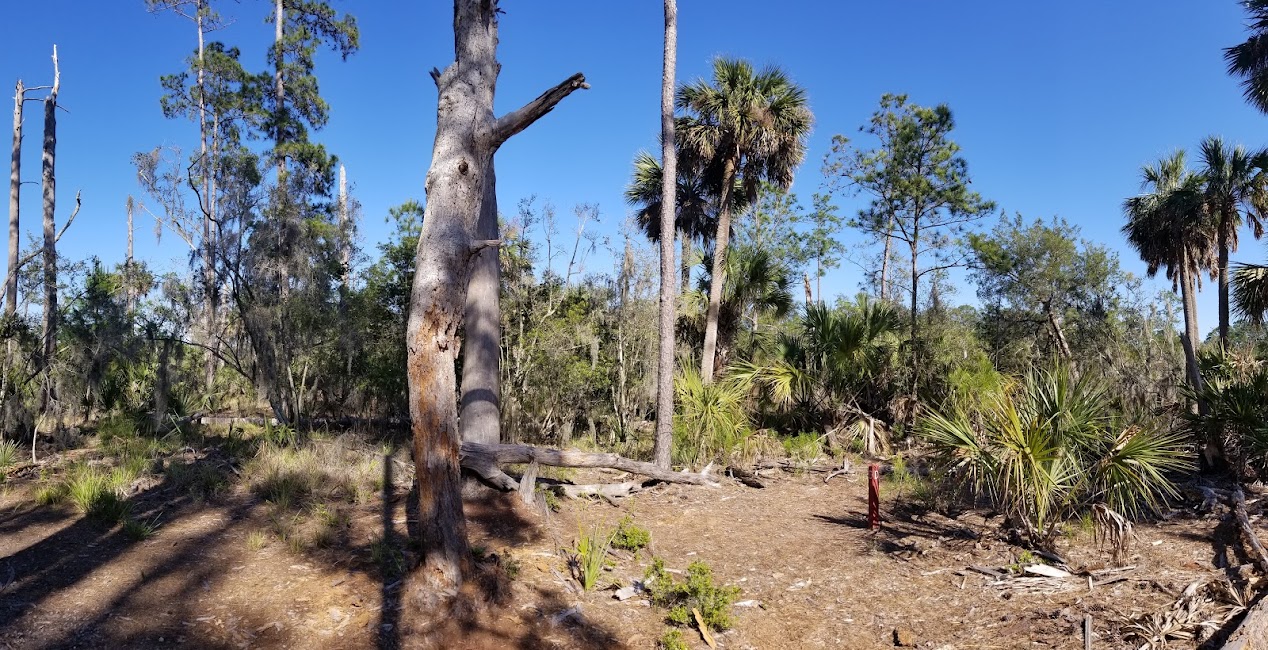 Back at our site, those chairs looked mighty inviting!

After relaxing for a while we began preparation for our departure the next day, it was time to continue our journey northward back to RI. But rest assured we totally loved both Savannah and Skidaway Island – we will be back!