After we said goodbye to Riverbend, we headed north on US-27, then east on FL-70 towards the Treasure Coast of Florida and our next destination, Savannas Recreation Area, a county park located in Fort Pierce.

Because of the beautiful sunrises (too bad we don’t get up early enough to see one) that occur over the Indian River, Fort Pierce is known as the Sunrise City. Although we never did an official review of Savannas, we wrote about the campground extensively in this post. Not much had changed since that last visit in 2014!

On this visit, we were assigned site #48 which was a spacious end site with a separate driveway where we could park our car. Since it was mid-April, there were quite a few empty sites indicating that the flocks of “snowbirds” had already begun their migration heading north.

Having been here several times before, once in 2013 and then again in 2014, our primary reason for stopping was not only to visit the East Coast of Florida again, but to also visit our friends, Jim and Ann, who own a beautiful winter residence in Vero Beach (and a summer home in NH). We developed a friendship with Jim and Ann when they were our next door neighbors at a condo we owned at Mt. Washington Place, Bretton Woods, NH. Although we sold that condo in 2006 (after 10 years of ownership) and they sold theirs in 2013, we have stayed in touch and do try to get together as frequently as our travel plans and their schedules permit. When we told them of our plans to visit Florida’s east coast, they immediately invited us over for dinner. It was so good seeing them and catching up on all the news. And as usual, Ann prepared a delicious, gourmet dinner! Thanks to both of them for their hospitality and a wonderful evening!

On Tuesday, the day that we were to visit with Jim & Ann, we did some sightseeing, visiting several places that we had been to before. Our day started off with a nothing special kind of breakfast at Lenzi’s Diner. 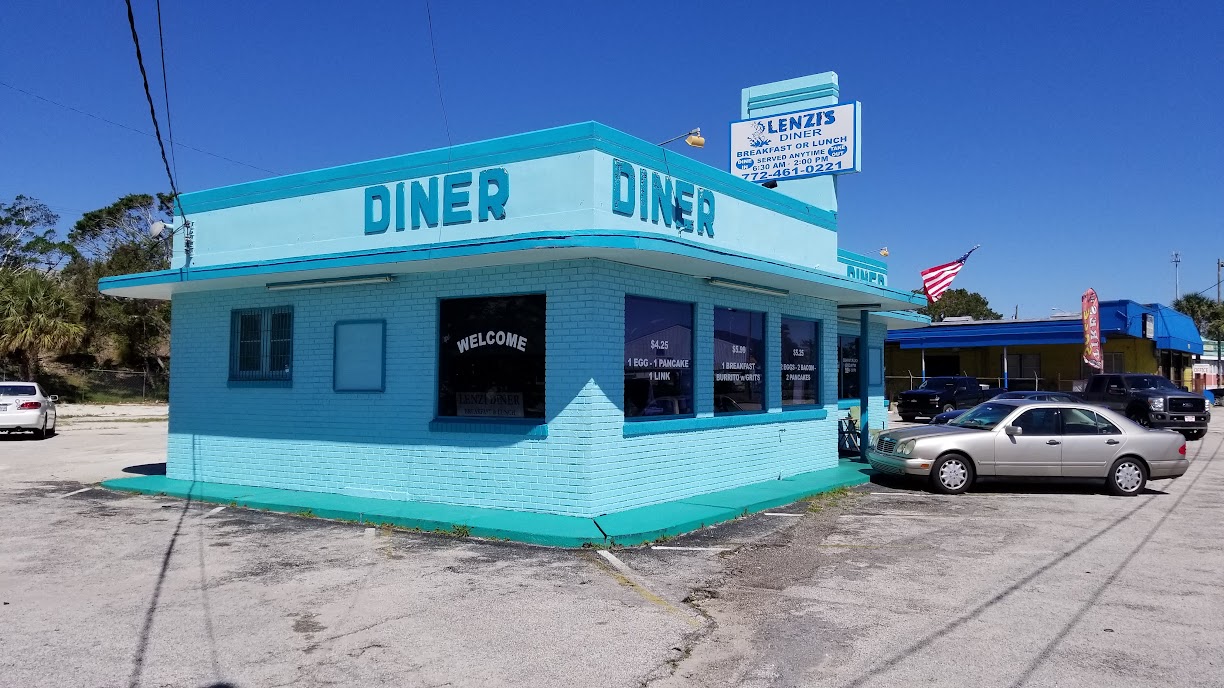 That was followed by a visit to Jetty Park.

From a bridge at Round Island Park, we watched a manatee float by. 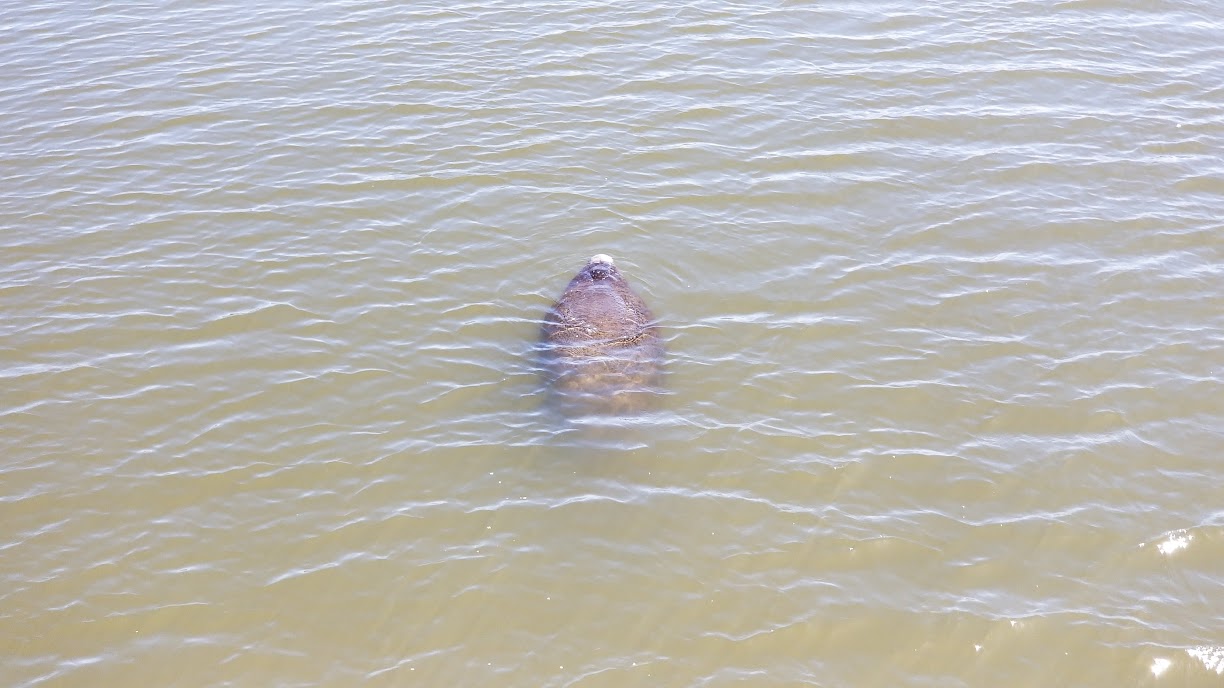 And just before we went to Jim and Ann’s, we took a short walk along the Vero Beach Boardwalk.

The next day we drove over to Stuart where we stopped at Sandsprit Park, which is surrounded by water on two sides. To the east is the St. Lucie River, to the south is Manatee Pocket which is a protected harbor with several marinas. It was such a beautiful day, we hung out here for awhile watching the boats going in and out of the waterways, listened to the caws of parrots flying back and forth as they were busily building nests and laughed at the hungry pelicans waiting not so patiently as the fishermen cleaned their catch.

After that we drove over to downtown Stuart where we strolled along the Riverwalk which extends from “downtown” all the way to the new Route 1 bridge. Pleasant walk. 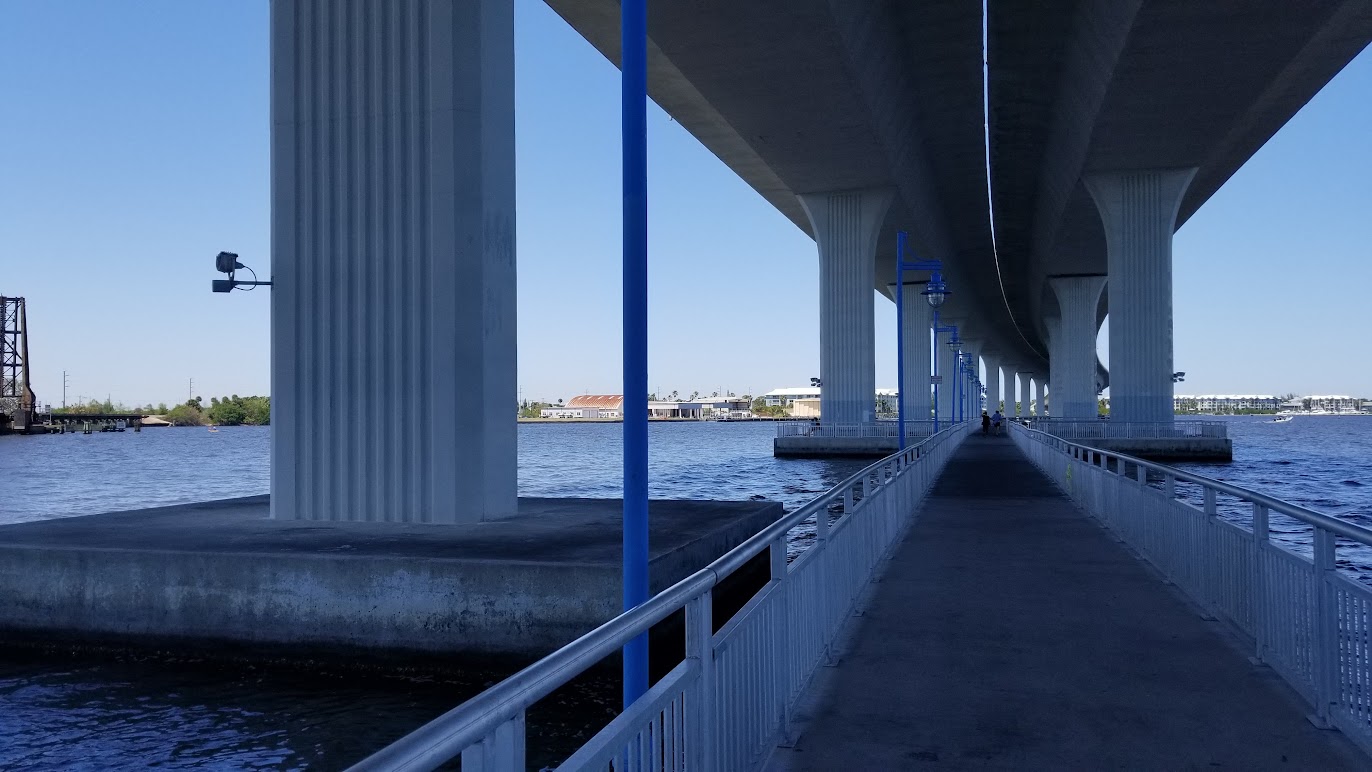 On our way back, we stopped for lunch at the Pelican Cafe where we split a Crunchy Mahi Reuben ($16.50) with house made chips. The sandwich and the chips were excellent but the service not so much! 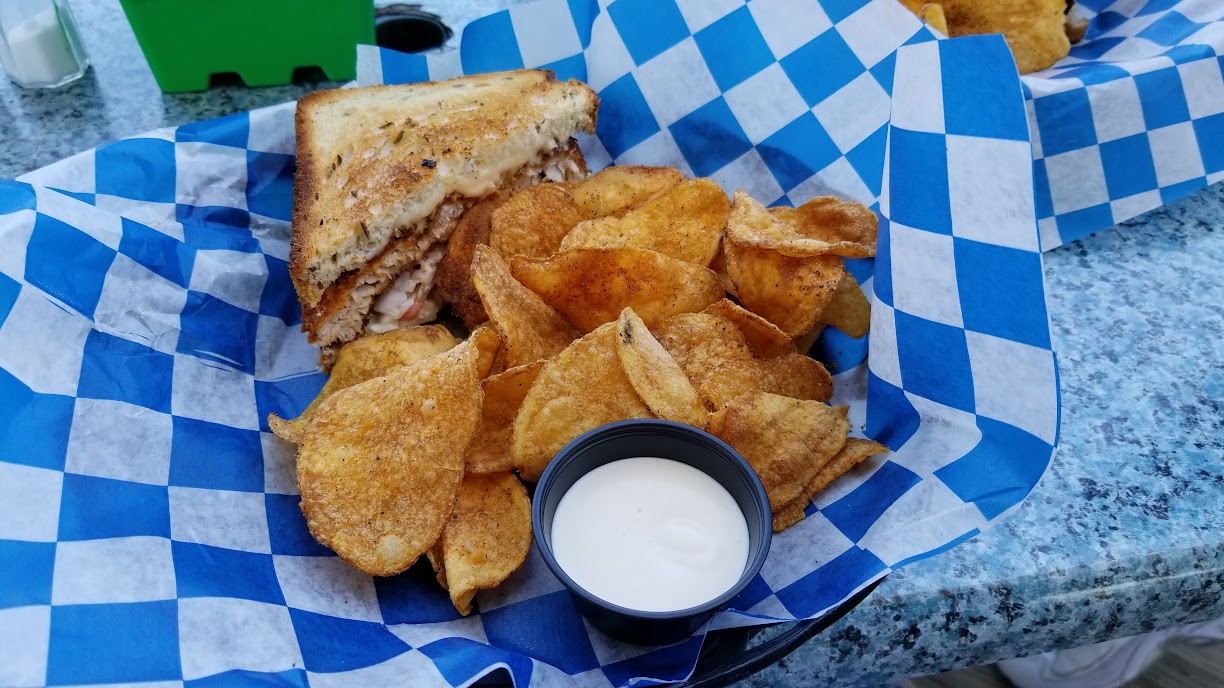 Finally it was time to return back to the coach where Rob found out he had a new BFF!  As soon as we parked the van and got out, there was this obnoxious and what appeared to be a fairly tame black bird (not sure what it was – perhaps a grackle) that swooped in on him. He fluttered around Rob, then sat on the arm of our lounge chairs, screaming at him. That was amusing for a few minutes. 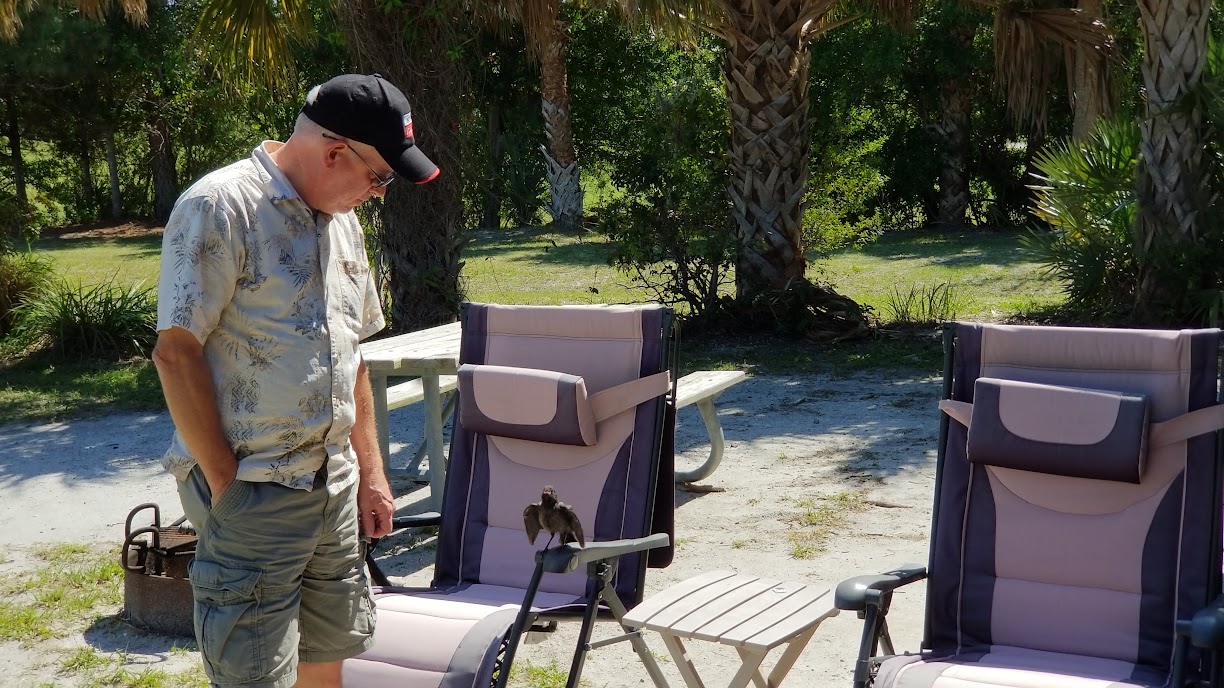 Figuring if we went inside, it would fly away, we started to walk towards the door of the coach. Fly away, well, yeah it did (sort of)! Not up in the air but straight to Rob’s back – guess in it’s eyes his back looked like a good landing pad!

At first, it was comical but then not so much, it actually became a little scary because it looked as though the crazy bird was going to start pecking at his ear. Fortunately no one else was around since it must have looked pretty funny – me frantically waving my hands and yelling with Rob hunched over with a bird perched on his back! 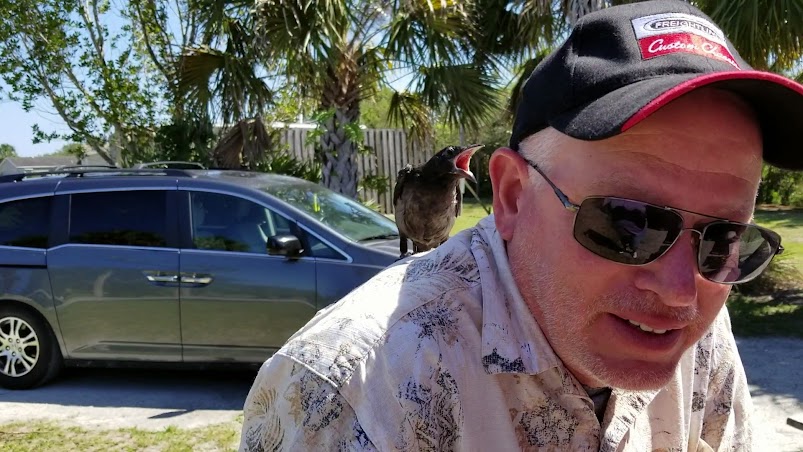 Finally it detached itself from Rob and flew to the ground. Whew! We both let out a sigh of relief! But whoa, not so fast! This attention seeking critter wasn’t done with us yet – it followed us to the door of the coach. Quick, we shouted to each other – get inside! Oh, no, I thought to myself, please don’t let this uninvited guest fly inside – how disastrous that would be! Whew we made it! Sitting on the step outside the screen door our fine feathered friend continued to constantly cackle at us. With our exit from the coach blocked, I wondered how long we would be held captives?

Being the fearless kitty that he is, Sparky found this door stoop intruder totally intriguing! That is, at least until the bird went into attack mode and flew towards the screen door quickly turning the fearless one into a fraidy cat! Perhaps he remembers when the swallows attacked him on the bow of the boat several years ago! With no handouts being offered, after about an hour, the obnoxious bird finally gave up and flew away! There are signs everywhere here that say “don’t feed the wildlife” but obviously this guy was looking for a handout and had no fear of humans.

That night I dreamt I was starring in Alfred Hitchcock’s The Birds movie! Good thing more of his buddy bird friends didn’t show up.

The next morning it was time to move again, heading for another favorite destination. More to come…..