Hard to believe that Thanksgiving has come and gone and Christmas is just around the corner. Whew, time just keeps on whizzing by!

Since we’re not big turkey eaters plus my B-day fell on T-day this year and yours truly didn’t want to spend the entire day slaving over a hot stove, we did what we did last year – purchased a Honey Baked Ham before we left Jupiter. No cooking required (at least for one part of the meal). Woo hoo! The rest of the menu would include Potatoes Gratin, Curried Fruit and String Beans with Meyer Lemon Vinaigrette and Parmesan Breadcrumbs (new recipe). Hard being away from family on holidays but at least the very familiar menu (what we used to serve at Christmas) brought back lots of great memories of past family holiday celebrations.

First thing that morning at Savannas Recreation Area, the cars and trucks (at least 5 or 6) started arriving next door. Kids and adults piled out of the cars and the trucks were loaded with “stuff”….oh, no looks like it’s going to be party time. Numerous tables and chairs

were quickly set up, their entire site as well as the area behind was occupied. Food & beverages quickly appeared and then, out came a huge grill and the turkey fryer. There are always so many warnings about the dangers of using turkey fryers that Rob was quick to comment “I hope they don’t end up setting the campground on fire!” Luckily no major disasters occurred (at least that we could see – not sure how the turkey tasted). We were prepared for a loud, raucous, noisy day but actually considering the number of people and kids, they weren’t all that noisy, no loud music, just the sound of people having a good time.

Before I started cooking, we decided to take a ride to downtown Fort Pierce. Lovely ride along the Indian River on route 707. Lots of lovely homes but there were quite a few (and empty lots) for sale. Wonder what the property values are? (OK, Rob checked on his Zillow App and some recently sold as low as $100K all the way up to $1.2mil). This coastline is unique for FL as it is well elevated and someplace we might consider in the future.

Not much going on in downtown Fort Pierce – it was like a ghost town. We parked the van and

walked along the marina and adjacent park (where we took the “not so great” boat tour last year) and joined a crowd of people (and a few pelicans) watching a guy cleaning fish along the dock. Wonder if he was having fish for dinner. 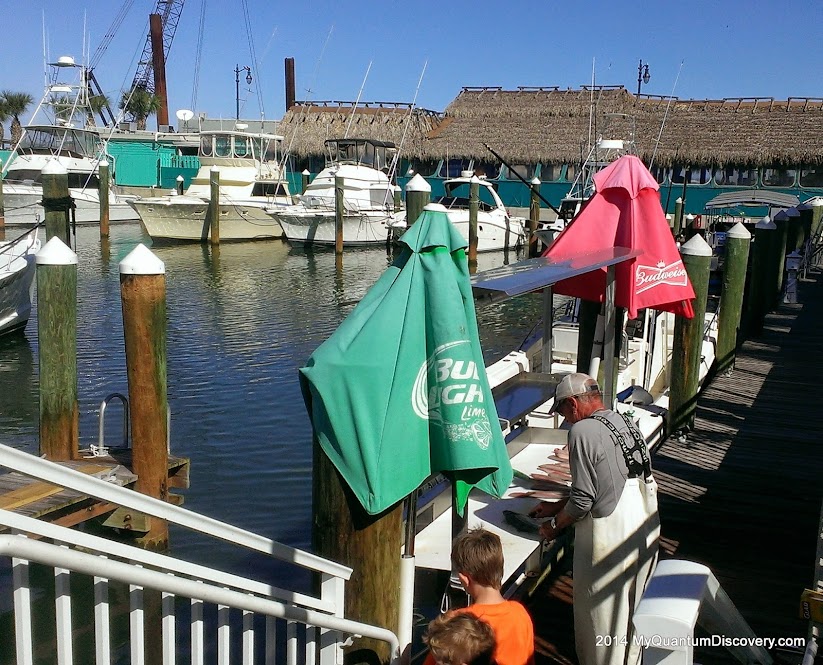 Eventually we headed back to the coach where it was time to get the fixings for dinner ready. Although I had purchased all the ingredients and it is pretty easy to make, I must admit in the early afternoon laziness swept over me so I never made the curried fruit. If I do say so myself (I think hubby agrees) everything was delicious. Plus we had lots of leftovers – great, no cooking for the next few days!

The next morning, Friday, we went out to breakfast at the J.J. Plum II restaurant, 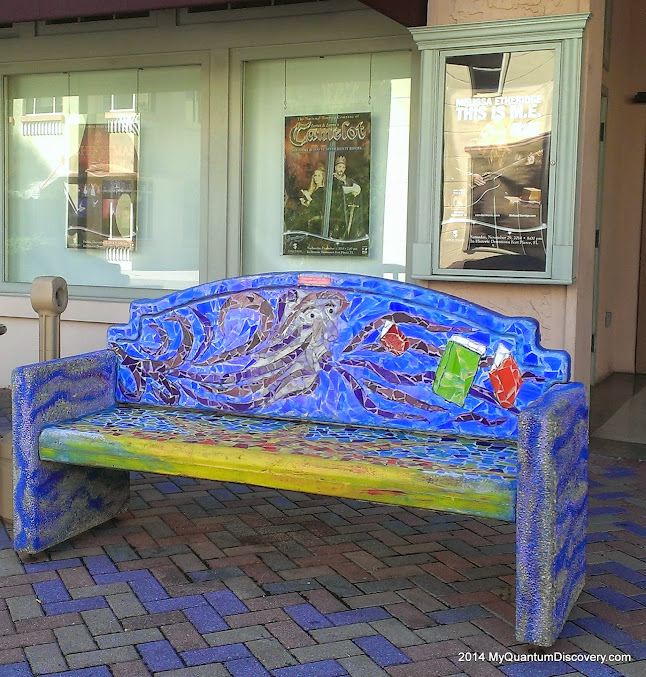 a short distance from the campground. It was good, basic, nothing special but the prices were very reasonable.

That night we had plans for our annual visit with Jim and Ann, our former neighbors at Mt. Washington Place condos in Bretton

Woods in the White Mountains of northern NH (interesting note – the link above is to a website Rob set up back in 2004, apparently it is still in use). Jim and Ann now spend winters at their beautiful home in Vero Beach and their summers in southern NH. They sold their Bretton Woods condo last year and built a new home in southern NH to be closer to their granddaughter. Funny that we have to travel 1300 miles to visit with them. We keep saying that we are going to make it up to NH to see them but we haven’t made it there yet. And they have yet to make it down to RI! Maybe next year!

Since it was the day after Thanksgiving, Ann kept dinner simple – a salad, 3 homemade pizzas with a variety of toppings (a chicken alfredo, a vegetable with peppers, onions and broccoli and a cheeseburger) and brownies for dessert. Yum! Delicious food as usual and super fun company! I know Jim and Ann are lurking out there – thanks so much for a super awesome evening! Hope we get to see you again in January!

On Saturday morning, bright and early (at least for us), we headed back to Fort Pierce to go to the Farmer’s Market (open from 8:00 a.m. to 12:00 p.m.). Jim and Ann had recommended this to us last year but we never made it so we wanted to be sure to go this year.

a.m. we quickly found a parking space, then wandered around.  According to their website, this market is ranked #1 in Florida and in the top 5 of America’s favorite farmer’s markets and 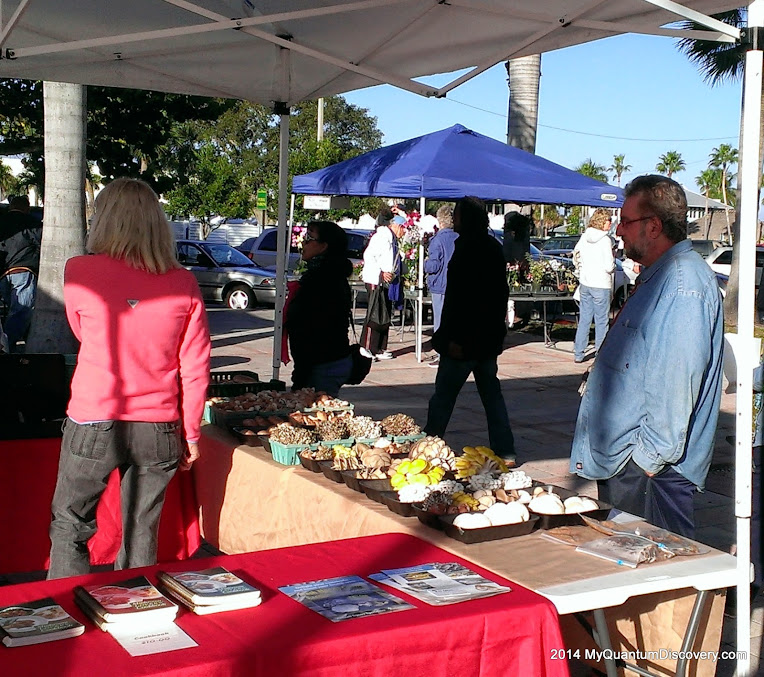 has 70 vendors who “offer a wonderful and diverse selection of delicious foods, exotic plants, savory spices, and much much more!”

lizards to paintings to jewelry – all pretty neat stuff and then another section had fresh food items being sold by local vendors. Dog biscuits, guacamole, jerk chicken, pastries, omelets, spices, olives, fresh produce – you name it, it was there. I was fascinated by a booth by KSS Sales, selling all types of mushrooms even bright yellow oyster mushrooms. Can’t say I’ve ever seen a bright yellow mushroom before! 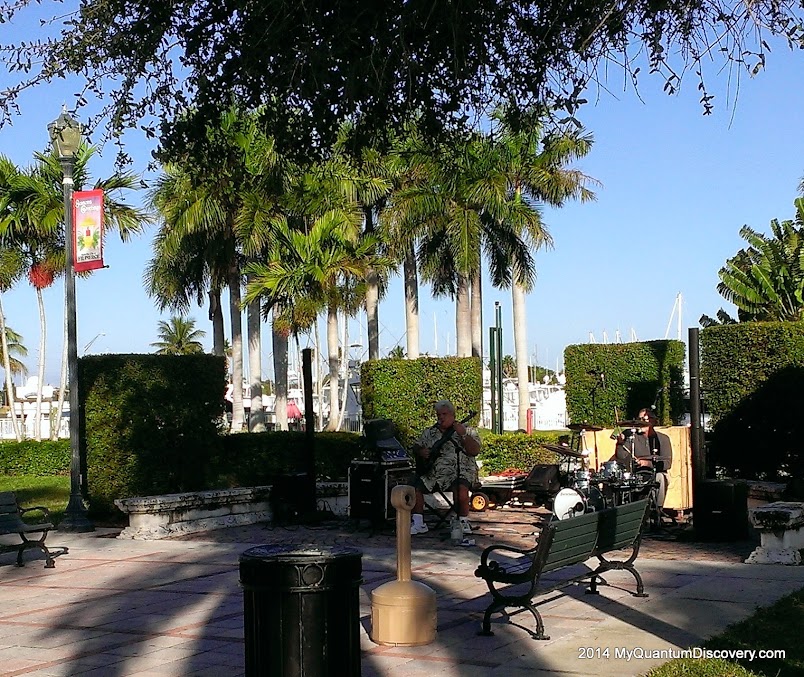 As we walked around I was thinking that it must be tough setting up the individual stands just for four hours once a week. But I would imagine that they must sell enough to make it worth the time, effort and cost.

Adding to the festive atmosphere was a two man band named Chubby Bones playing music nearby on a couple of park benches.

Perfect background music for grabbing a bite to eat or just resting your feet!

from smoked king fish, mahi mahi and tuna which was soooo good – wish we had bought more!

Since we hadn’t had breakfast, we were getting hungry so we headed for Lenzi’s Restaurant, a couple of miles away, located at 800 Virginia Ave.

Based on a couple of reviews he had read, Rob decided to have their heart attack special (our name, not theirs) – a double

bacon & cheese omelet ($6.99) served with toast and a choice of home fries, hash browns, hash brown casserole or grits. I wish I could say that I ordered something healthier but I figured if he was going from a heart attack I should be right there with him so I had the same. Both of us had the not so healthy hash brown casserole which was also very good. More  leftovers!

After a quick stop at the coach again to put our purchases away, we were in “been there, done that” mode, heading over

to Round Island Riverside Park which we had visited several times before. Along with Fort Pierce Inlet State Park (fee). This park is on North Hutchinson Island with the Atlantic to the East, the Indian River to the West and the Fort Pierce Inlet to the south. Also in this area is the National UDT Navy Seal Museum which we have not been to yet but looks interesting.

Of course along the way on A1A we stopped to look at the beach at Avalon State Park – aren’t we tired of looking at beaches yet? Guess not since we keep doing it! Note that there are two sections to Round Island Park – one is on the ocean and the other is on the Indian River (no fee) which is where we headed today. Once parked we walked across the bridge next to the canoe launch, hoping to see a manatee or two but no such luck.

A woman there said that there had been several manatees a few days ago before the cold front moved in. Must have headed for warmer temps. Darn!

Next we headed for the observation tower where we spent some time, enjoying the view. Such a beautiful day – couldn’t have been any more perfect!

When we left Round Island Park, we made our way over to South Hutchinson island and Jetty Park on the south side of Fort Pierce Inlet. The tides and the strong winds make for some pretty fierce surf and currents at the entrance of the inlet. This is another spot we went to last year but on that particular day if I remember correctly it was pretty chilly. A lot different this year with temps in the 80’s!

If you are visiting this area and are debating going to Fort Pierce Inlet State Park (which is on the north side of the Inlet) or the Jetty Park, Jetty Park is probably best for even just a short visit as it has a nice breakwater you can walk out on, a beach and a paved shore path along the inlet shore. Plus it’s free. The State Park has a nice beach area and pavilion shelters along the inlet shore, but there is no access to the breakwater, plus there is an entrance fee so it is better for longer visits.

! Have I ever ranted and raved about how much I love these birds? Probably. I think they are the coolest birds, elegant on one hand and yet somewhat comical looking. The way they dive bomb into the water

from as high up as 60 feet, twisting their bodies as they hit the water with such force that it stuns the fish is totally fascinating! How they don’t hurt themselves is beyond me! According to this article, they don’t.

“Air sacs beneath the skin on their breasts act like cushions. Also, while diving, a pelican rotates its body ever so slightly to the left. This rotation helps avoid injury to the esophagus and trachea, which are located on the right side of the bird’s neck. Pelicans have also learned that a steep dive angle, between 60 and 90 degrees, reduces aiming errors caused by water surface refraction. We know that pelicans “learn” this behavior

because adults are better marksmen than young birds.”

Fascinating birds! As we walked over to the jetty, there were about 10 of them right next to the rocks, diving over and over again. We stood there for quite some time just watching them as well as the kite boarders who were skimming over the water at a pretty good clip. Such great entertainment! (Here’s a one minute video of their antics.)

Strolling to the end of the jetty breakwater, we spent more time watching several boats fighting the currents and the waves as they left the

inlet. Leaving the jetty we walked around the rest of the park, finally heading back to the van which was parked near several restaurants. Lots of people sitting outside so they must be pretty popular.

Finally we left the park and headed back to the coach where we spent a quiet rest of the day.

The next day, Sunday, we were off once again. This time getting close to nature. More about that in our next post.