Our 2017 Entegra has a console to the left of the driver seat with several rocker switches. They are for things like the docking lights, jake brake setting, pedal adjustments, air horn, mirrors, etc. But there is one additional switch that is the Main Power cutoff for the coach. If toggled off it will shutdown most systems in the coach (heating, cooling, lights, etc.), it’s purpose being a way to conserve power when the coach is left unused for a while.

A few times (usually while cleaning) we have accidentally hit the switch and shut everything down, but our little boy Sparky loves to walk on the console so he can look out the window and has become an absolute pro at shutting the coach down, not to mention turning on the docking lights. The docking lights are just an annoyance, but shutting off the main power on a hot day would kill the AC. We don’t think Sparky has enough technical savvy to realize if that happens while we are away that he should turn the power back on if he wants to be cool.

Our solution was to jam something under the lip of the switch to prevent it from being toggled, but now there is a better way, a new style switch with a lock out mechanism.

This new style switch has been installed at the factory starting with the 2018 Entegra models and it works in conjunction with a Blue Sea ML-RBS  7700 latching relay installed near the house batteries mid coach.

The 2017 Entegra’s don’t have the new lockout style switch, but they do use the ML-RBS 7700 latching relay, so the retrofit is a simple switch swap.

Note: 2016 and older Entegra’a use a BigBoy Solenoid latching relay and unfortunately the BlueSea lockout switch is not compatible (more about this at the end of the post).

Photo below shows the old and new switches side by side. The new switch is still a rocker, but it is recessed and has a sliding door to cover the OFF section: 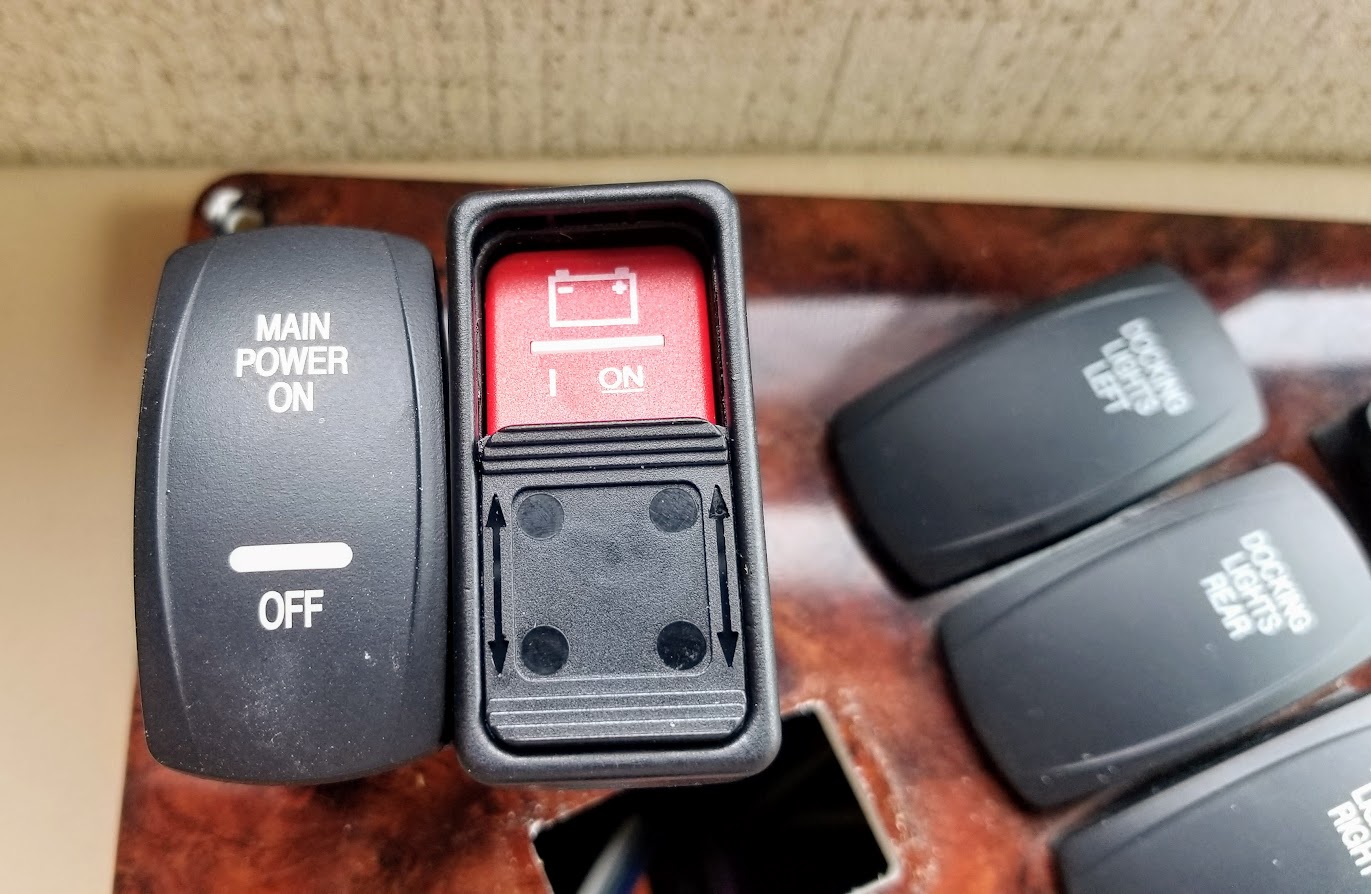 To make the switch swap, undo the console screws, lift it up carefully, pop the old switch out of the console by depressing the four “wings”, two on each end. Then remove the wiring harness connector plug. 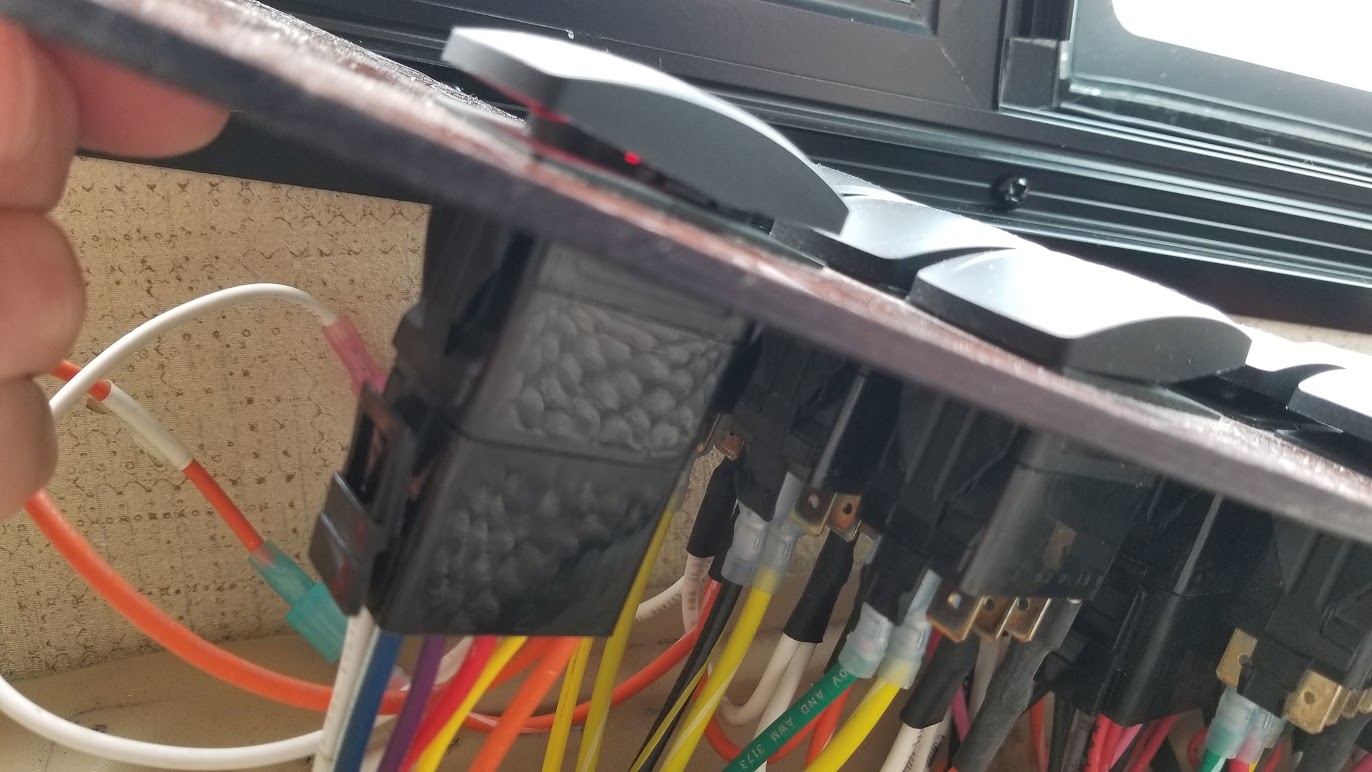 Clip off the plastic guide pin on the new switch so the wiring harness connector will fit: 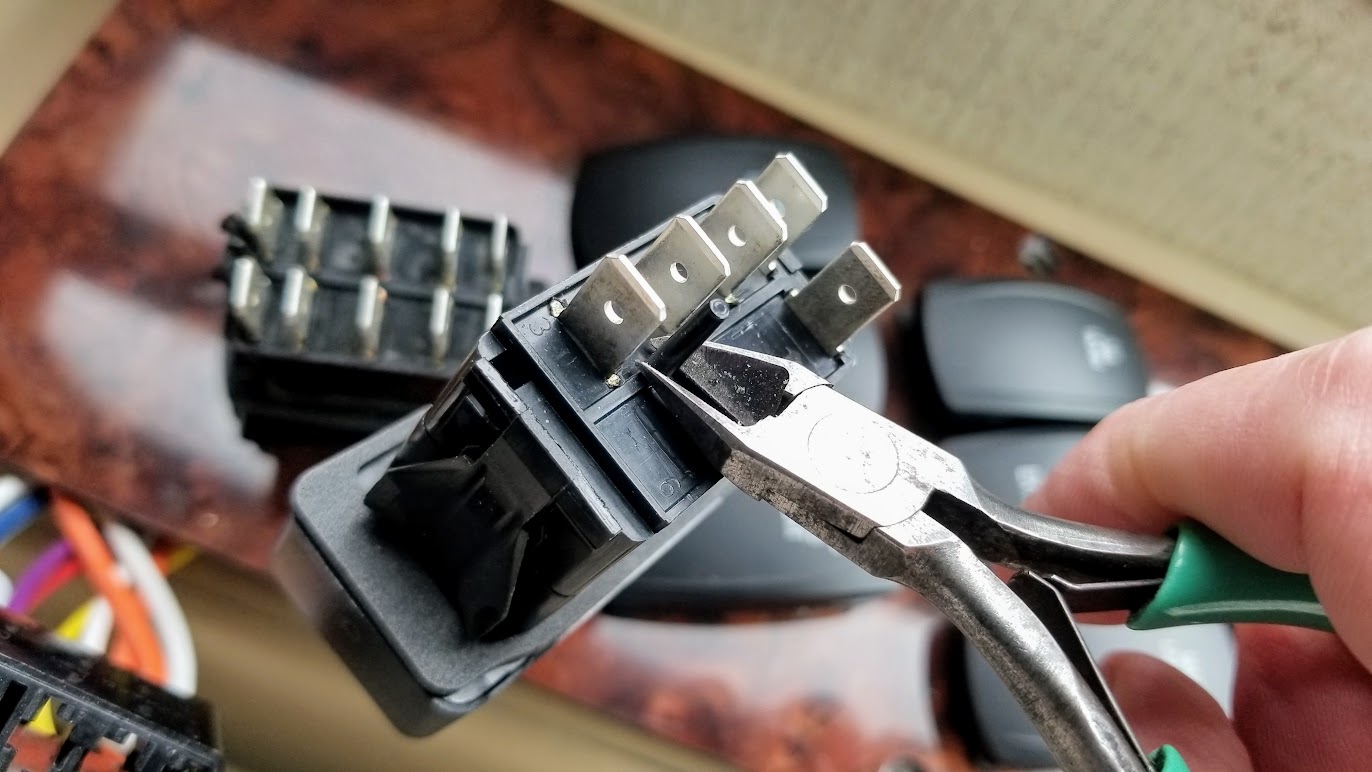 This photo shows the business end of the new switch (top), old switch and connector: 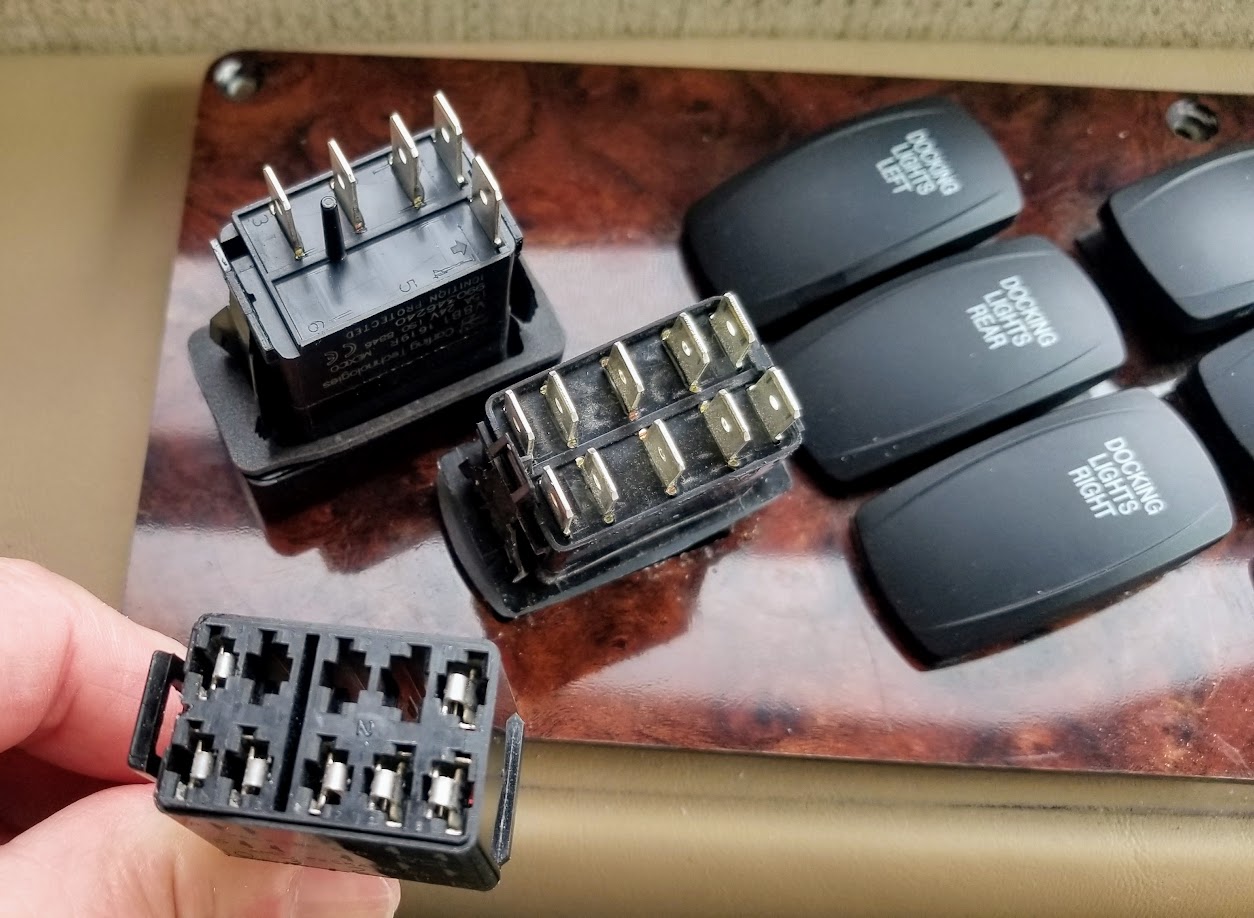 Orient the new switch as shown below on the connector: 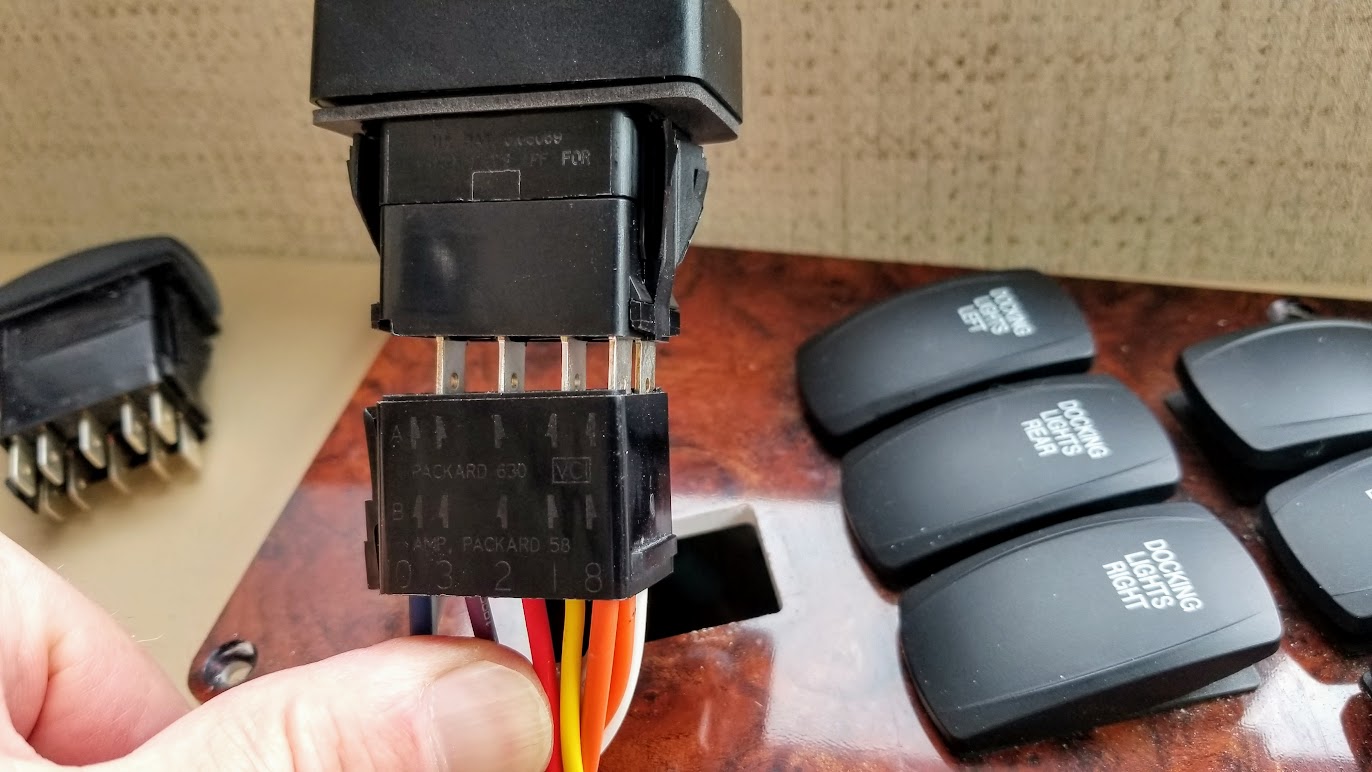 That’s it! Just pop the new switch back in and refasten the console plate.

If you want to add a power on indicator, pop the blue (pin 10 +12v) and white (pin 9 GND) contacts out of the connector body and connect them to a 12v LED light of your choice. To remove the connector elements, insert a small screwdriver into the smallest opening at the top of the connector and gently push the locking tab in so the connector can be pulled out. The locking tab is clearly visible on the white wire in the photo below. CAUTION: do not let the two tabs make contact or you will blow a fuse somewhere: 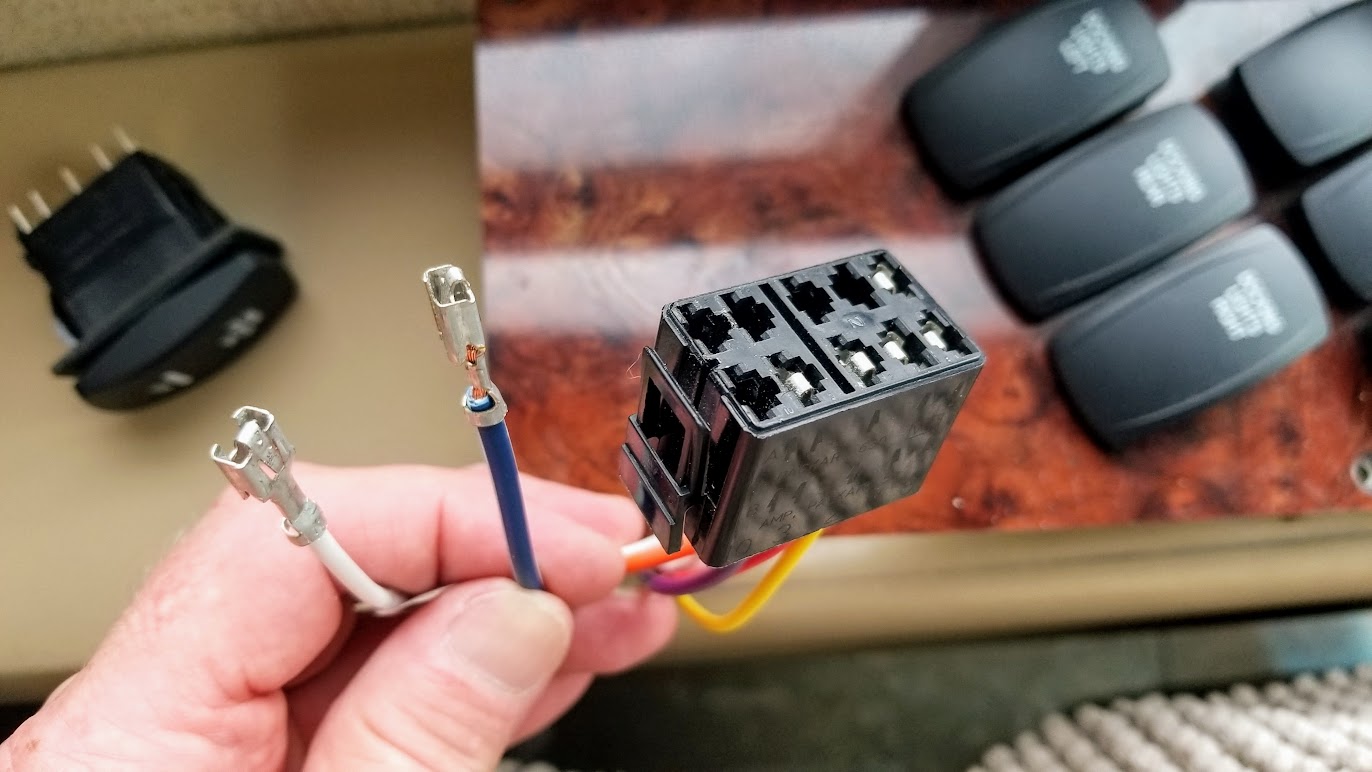 There is no need to cut the connectors off as standard 1/4″ tab quick connects will fit perfectly, just cover the bare metal with tape or heat shrink as shown below. You will also need to drill a hole in the console plate to mount the power on light. 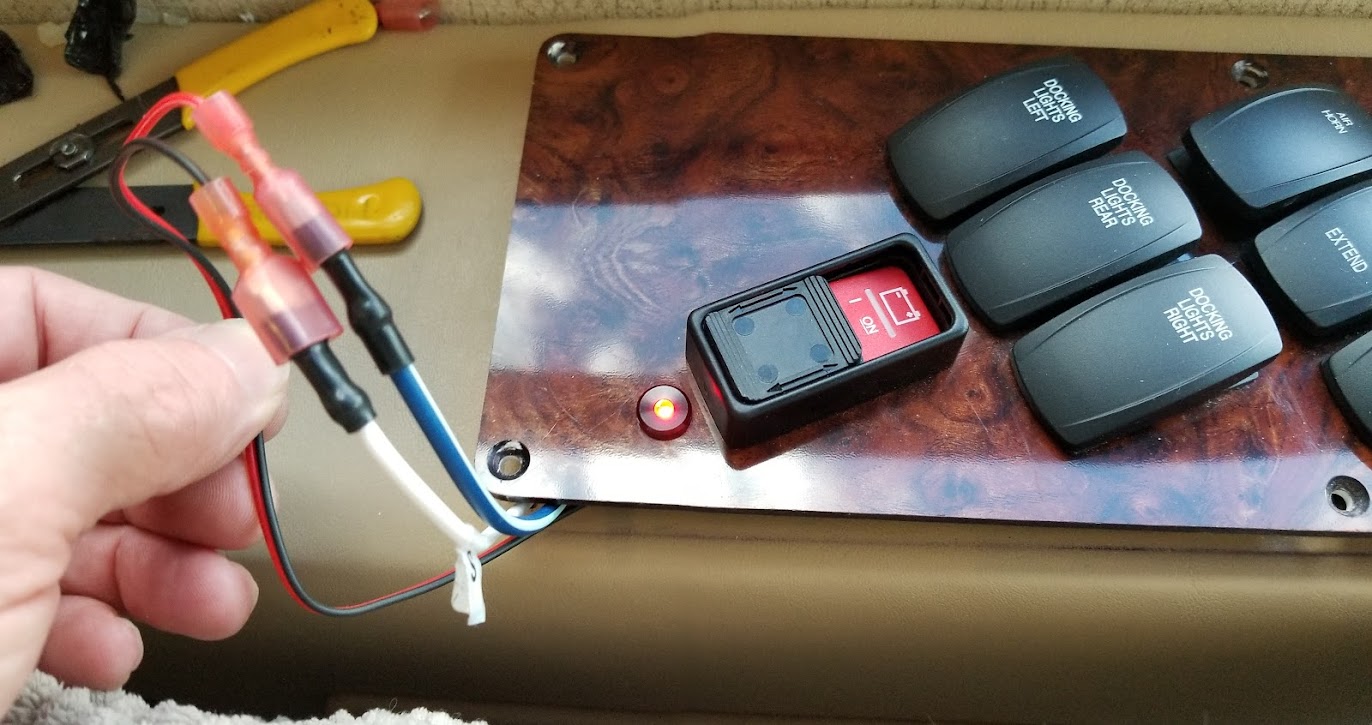 Final result including the power on light: 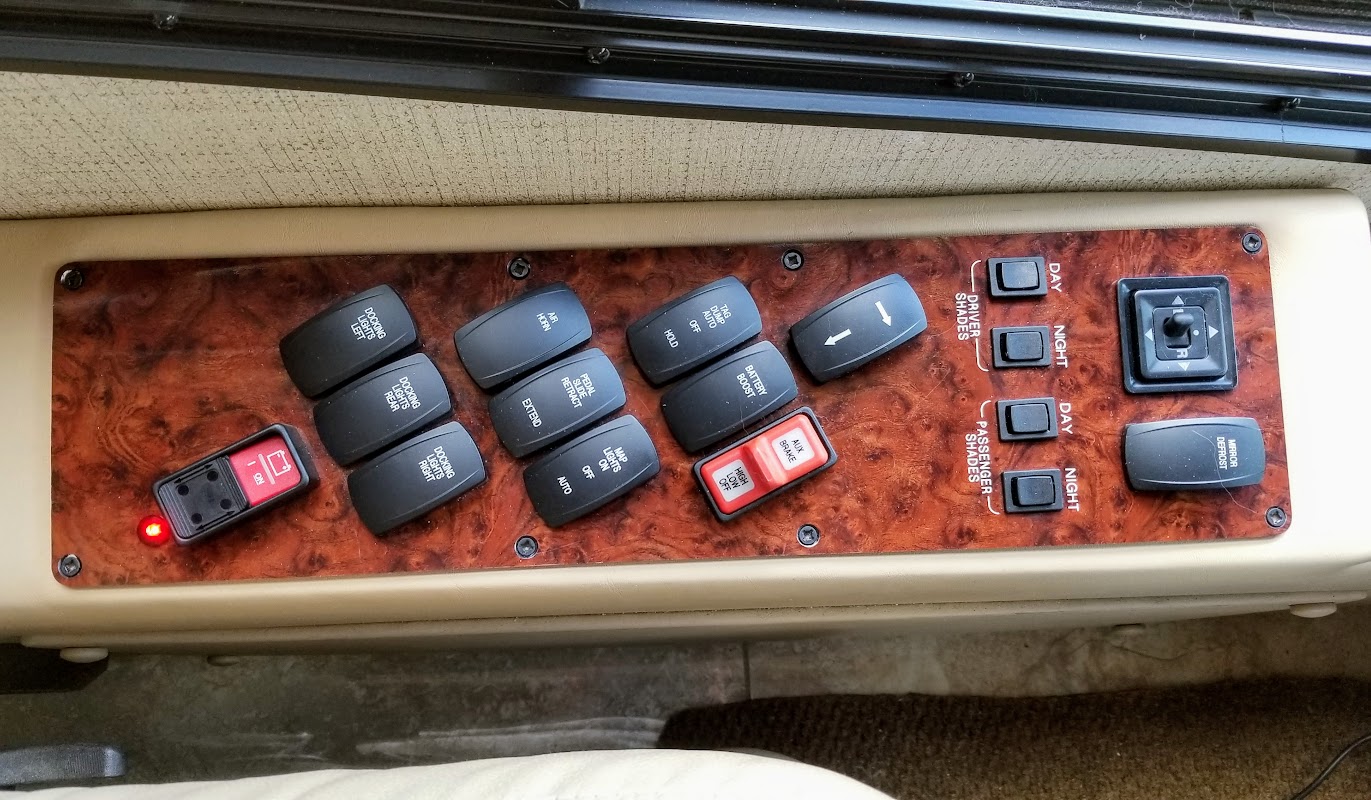 If desired BlueSea can provide a “DC Main” switch label that will fit in the square area of the protective slider. Various other labels are also available.

Why the Blue Sea 2145 switch won’t work with 2016 and older Entegra coaches that have the Big Boy Solenoid:

The BlueSea ML-RBS and BigBoy are both “latching” solenoids (they don’t use any power in either on or off mode), however they are triggered differently. The BlueSea requires a positive voltage on one lead to turn it on and a positive voltage on another lead to turn it off – this means all that is needed is a SPDT (Single Pole Double Throw) momentary switch like the 2145. The Big Boy requires a reversal of the voltage on its control terminals and that requires a DPDT (Double Pole Double Throw) momentary switch like the factory switch. As far as I know there is not a DPDT version of a switch like the 2145.