It seemed like we had just arrived when it was time to sadly say good bye to the Big Easy. We left the city, merrily rolling along I-10 under a bright blue sky, dotted with puffy white clouds when suddenly, there was a loud noise sounding like gunfire. Wait don’t be alarmed! It wasn’t gunfire but a small rock hitting the windshield right in Rob’s line of vision, kicked up by some vehicle ahead of us. Oh, no not again! We had already had one smaller chip (also in Rob’s line of vision) repaired by Entegra in May, 2017. This divot/spider crack was slightly bigger and about 5 inches to the right of the first one, a little bit larger than a quarter in diameter. It was not only annoying to have this happen again but it was also of concern that before we could get it repaired it might spider more and grow larger. 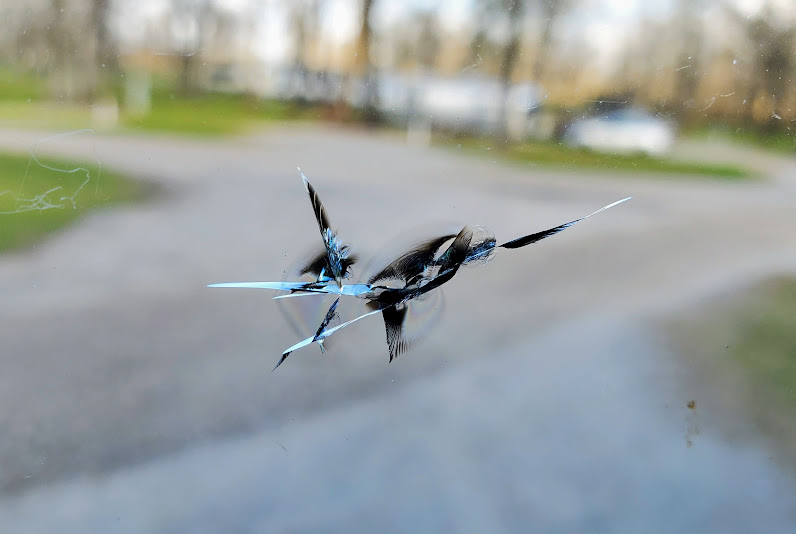 Except for that unfortunate incident, our drive to our next destination, the “crawfish capital of the world” (Breaux Bridge, LA) was uneventful. That is a very good thing because between Baton Rouge and Lafayette, for 18.2 miles, is the Atchafalaya Basin Bridge, aka the Swamp Express or the more recent name, Louisiana Airborne Memorial Bridge on I-10. The bridge crosses over Atchafalaya Basin. Even bigger than the Everglades, this basin is the nations largest river swamp containing almost one million acres of America’s most significant hardwoods, swamps, bayous, and backwater lakes in the U.S. 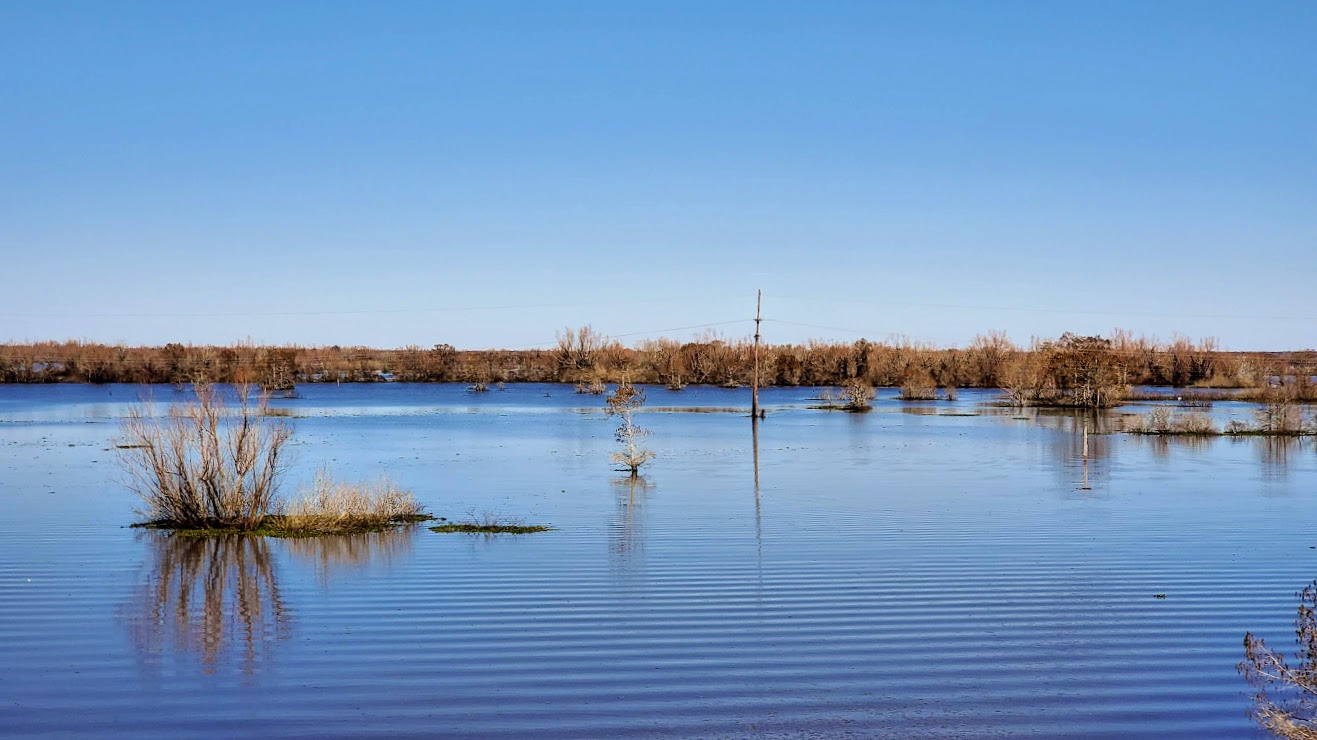 The bridge itself was constructed between 1971 and 1973, and is a twin bridge, which means that there are two parallel bridges of similar size (two lanes in each direction) that run side by side. With its narrow lanes and not much of a shoulder, it certainly is not a place to break down especially in a monstrous motorhome. 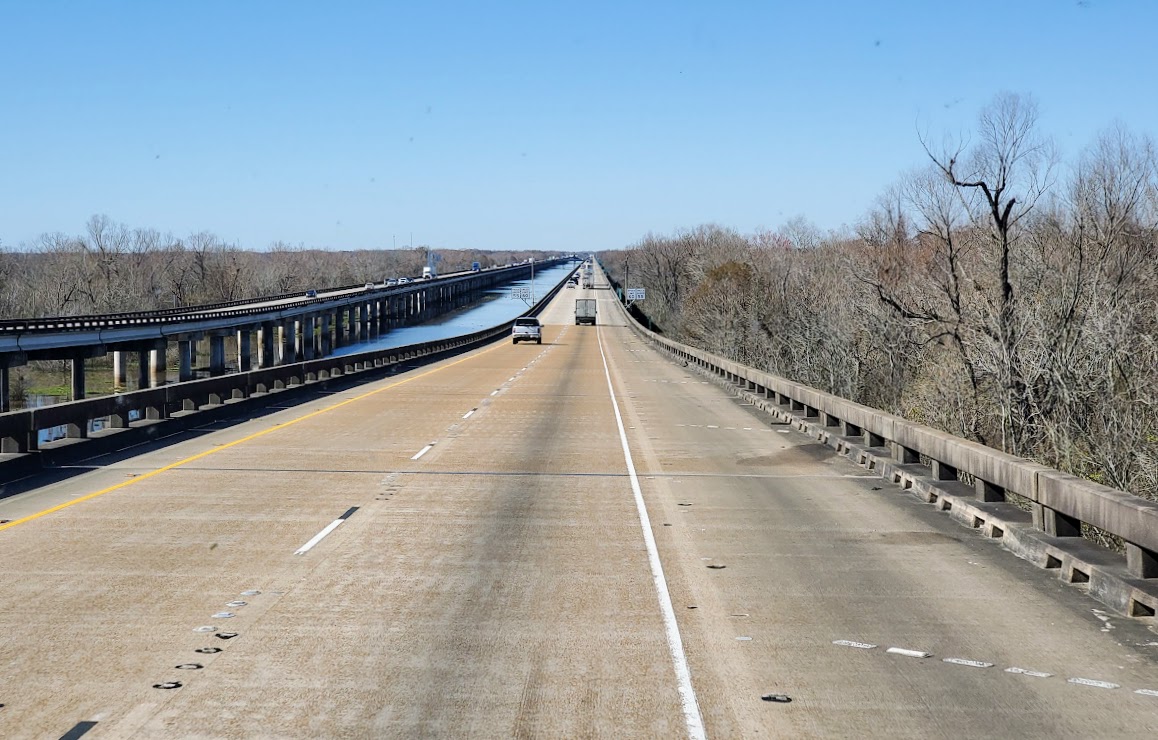 It is the 3rd longest bridge in the US, the 2nd longest on the interstate system and the fourteenth longest in the world by total length. The average clearance above the water is 12’8″ but because several rivers weave under the bridge, in some places it was built high enough to allow barges and tow boats to pass. Constructing a lengthy bridge such as this over a swamp must have been a daunting task as seen in this interesting vintage video. 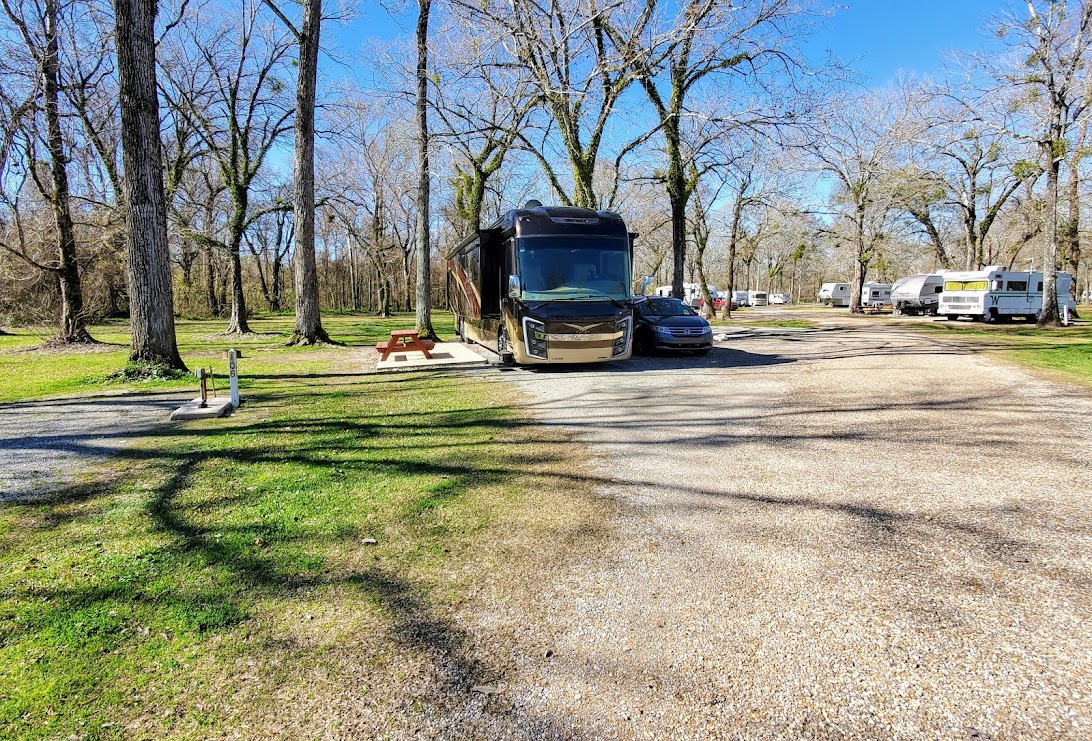 Once settled into our site at Cajun Heritage RV Park (formerly Frenchman’s Wilderness) in Breaux Bridge, LA , the first order of business was make an on-line appointment with Safelite Autoglass to have the new crack in the glass repaired. Being Florida residents, windshield repairs are covered by our insurance so it didn’t cost us anything. Although they couldn’t make the crack totally disappear, it looks better and at least now it won’t continue to spider. Guess if we get another ding especially in the same vicinity we’ll need to replace the windshield.

Nestled along the banks of the slow-rolling Bayou Teche and located in the heart of Cajun country, the quaint town of Breaux Bridge was named for Acadian pioneer Firmin Breaux who built a suspension footbridge across the bayou in 1799. In 1817, Firmin’s son, Agricole built the first vehicular bridge, allowing for the passage of wagons and increased commerce in the area. Area residents and visitors soon knew of the bridge, and began calling it “Breaux’s bridge”, which was later adopted as the city’s name.The town was officially incorporated in 1859. 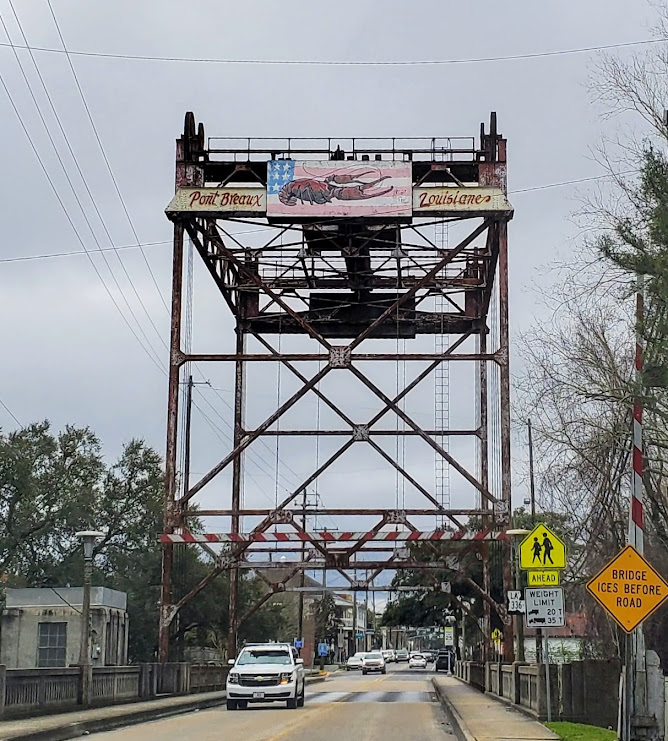 But first, to get the lay of the land, a trip to the Atchfalaya National Heritage Visitor Center just down the road a bit from the campground was a must.

What a beautiful Visitor Center! Here we learned that “Atchafalaya” (ah-CHA-fa-LIE-ah) means long river and that the Atchafalaya National Heritage Area stretches across 14 parishes in south-central Louisiana. 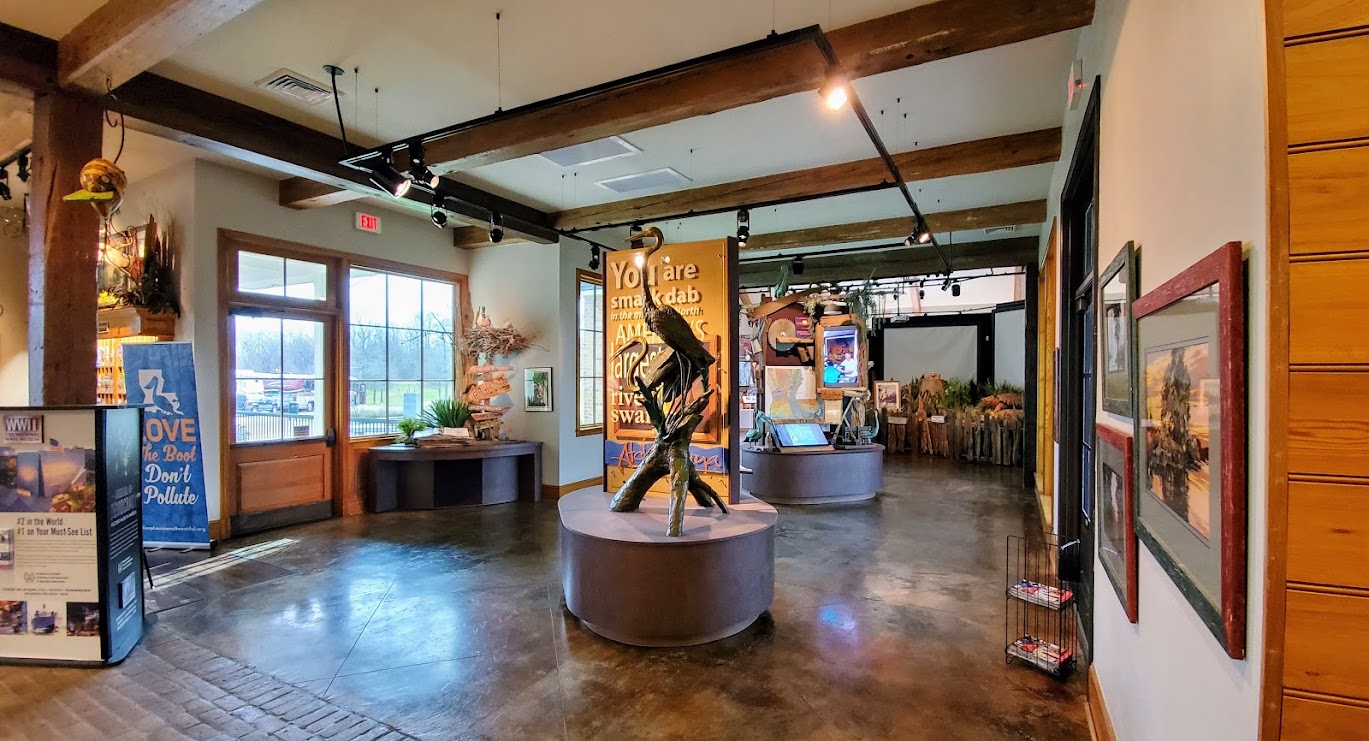 As we meandered into their theater, we giggled listening to a racoon and a turtle talking about surviving another day in the swamp. Of course they had such thick Southern drawls, it was hard to understand them. Too cute! Inside the theater, we joined Ah-Yee, the Atchafalaya swamp guide bird for a 4 minute peek into North America’s largest swamp (note they have several videos on their website). Through a variety of exhibits showcasing the unique flora, fauna, and cultures found throughout the Atchafalaya National Heritage Area, we also learned these important facts listed on their website. Outside there were statues of birds and animals commonly found in the area, along with a flat-bottomed crawfishing boat. Well worth the stop!

Next we headed for the town of Breaux Bridge, but since we were hungry, we made a quick stop at Hebert’s Boudin & Cracklins. Of course, we Northerners had no idea what was being offered at this place but quickly learned that Boudin is a rice, meat and seasoning mixture that is stuffed into a sausage casing and Cracklins are fried pork rinds. Guess the woman behind the counter felt sorry for us since we didn’t know what we were doing, so she suggested that we order a pepper jack Boudin ball, then she gave us two Boudin (don’t remember the exact flavors) and a few Cracklins. Everything was good although we weren’t too fond of the Cracklins, pretty tough and chewy. 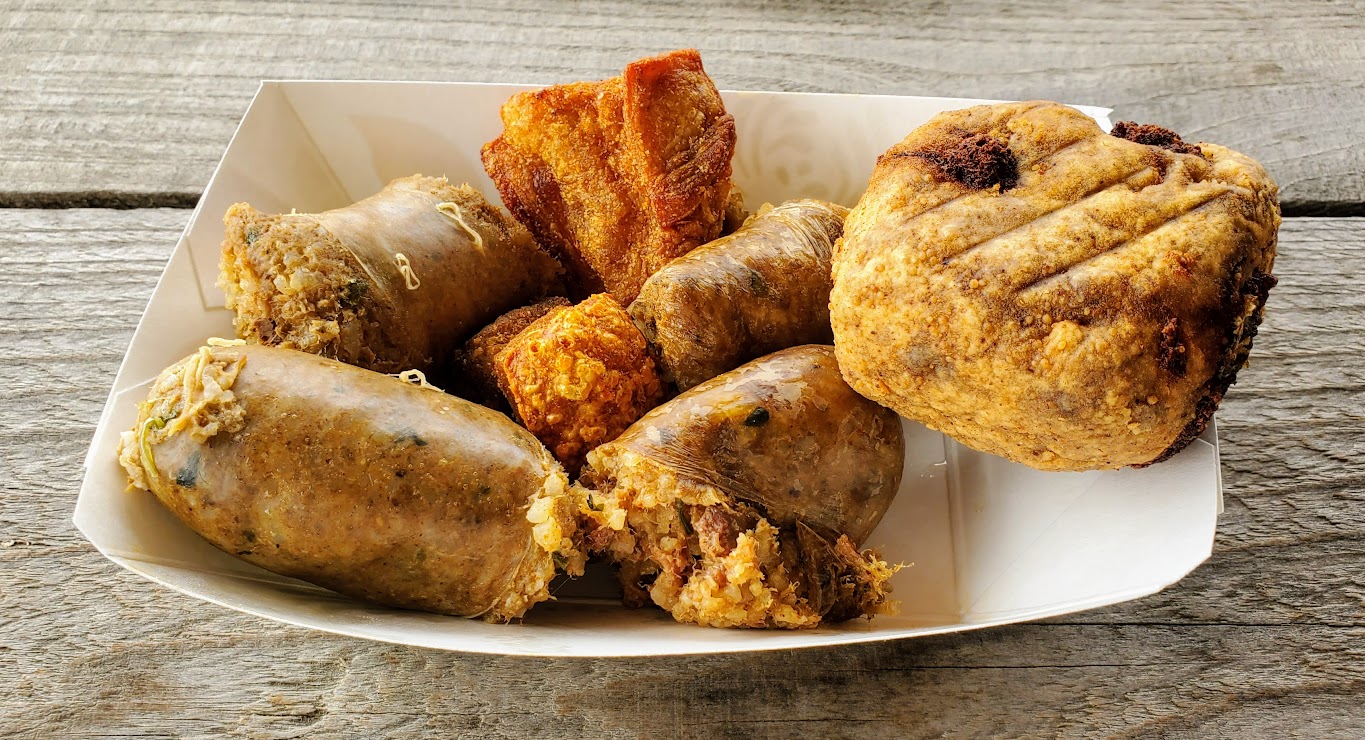 So why is Breaux Bridge known as the “crawfish capital of the world”? According to several websites, “restaurants of Breaux Bridge were the first to offer crawfish openly on their menus, and it was here that the now world-famous crawfish etouffee was created. Breaux Bridge became so well known for its crawfish farming and cooking that, in honor of its centennial celebration in 1959, the Louisiana legislature officially designated Breaux Bridge as ‘la capitale Mondiale de l’ecrevisse‘ or ‘the crawfish capital of the world‘. We like the taste of crawfish well enough, but we’re just not into the shucking scene. Lobsters are one thing, but crawfish being so small just seem like too much work! But just in case we did decide to try the decidedly messy process, I watched several YouTube videos showing how to eat them. That still didn’t tempt me to try it, just the opposite in fact! 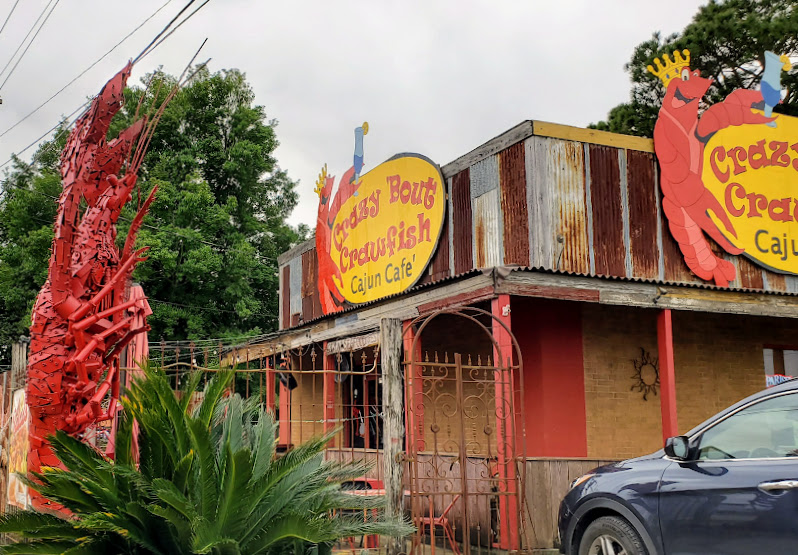 They are so into their crawfish here, at the beginning of May they hold a 3 day Crawfish Festival celebrating their favorite crustacean. Enjoy crawfish prepared in every imaginable way—fried, boiled, in an étouffée, bisque, boudin, pie or jambalaya, and crawdogs. Compete in a crawfish eating contest! Cheer on your favorite numbered crawfish in the crawfish races (that must be pretty funny to watch). All while enjoying world famous Cajun, Zydeco and Swamp Pop musicians performing on three stages. Sounds like quite an event!

This time of year though the town was pretty quiet, probably because of the time of year and the cool temps. Not a lot to do – perhaps perusing the antique shops that lined the main street, or perhaps an air boat tour of the swamp, but due to the chilly weather that didn’t make it on to our to-do list. One afternoon we had lunch at Cafe Sydney Mae.

Named after a Former Louisiana State Representative, this place seemed like a pretty upscale restaurant for such a small town. So many good things on the menu, it was hard to choose. So at the recommendation of our waitress, we shared a cup of the phenomenal Corn and Shrimp Bisque ($7), split a Cajun Cuban Press ($13) sandwich (slow cooked pulled pork, shaved ham, mustard, Cajun pickles, swiss cheese, pepper jack cheese served on a pressed poboy bun) and hand cut onion rings ($7). 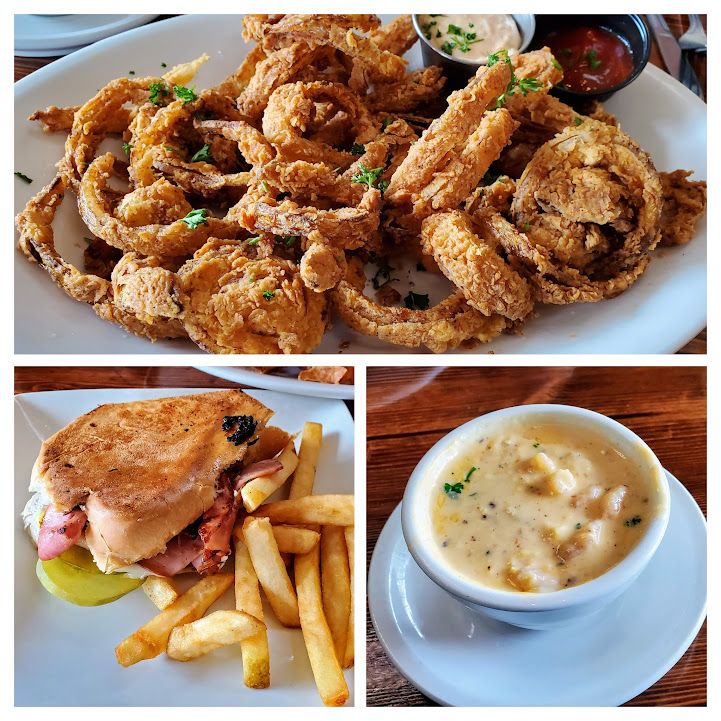 As if that wasn’t enough, our waitress must have known that bread pudding is one of my favorite desserts so yep, she persuaded us to share the Bonnie’s (she’s the Executive Chef) White Chocolate Bread Pudding ($7) which was bread pudding with Belgian white chocolate, Godiva Liqueur covered with a warm white chocolate sauce. Oh, boy, what a delicious lunch!

After four nights in Breaux Bridge, it was time to move on to our next stop, Gulf Coast RV Resort in Beaumont, Texas for a quick overnight stay. We had stayed here back in March of 2018. Being close to I-10, easy in and out and relatively inexpensive with a 50% discount through Passport America, it was a good choice for us.

It was a fairly uneventful drive, but due to road work an a closed bridge over I-10, heading westbound we weren’t able to take the usual and very convenient Brooks Road exit to the campground and had to follow a more convoluted route to avoid the construction.

Note that heading eastbound on I-10 the exit is still open at Brooks Rd, but at this time we do not recommend that big rigs attempt it – it is very narrow, lined with concrete barriers and has tight turns – the owner of Gulf Coast told Rob several campers had arrived with scratched and damaged rigs. Suggest contacting the reservation desk to get proper directions. 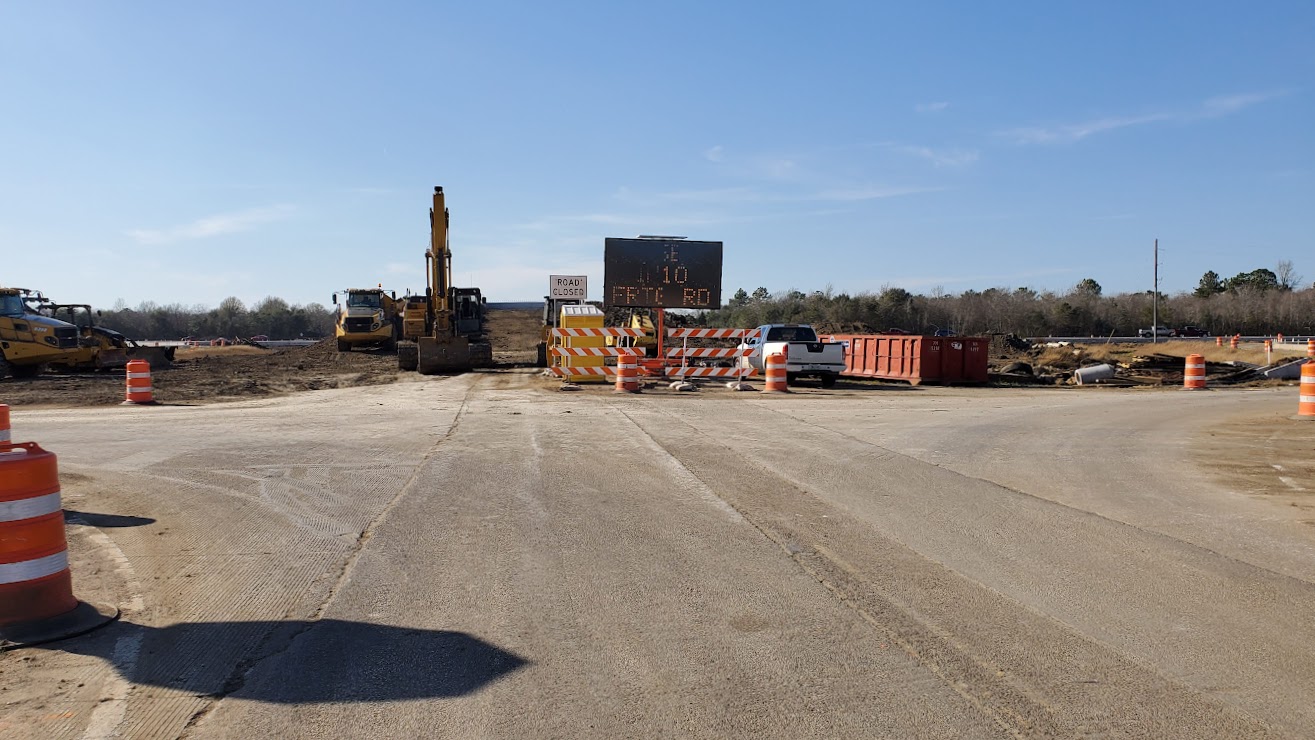 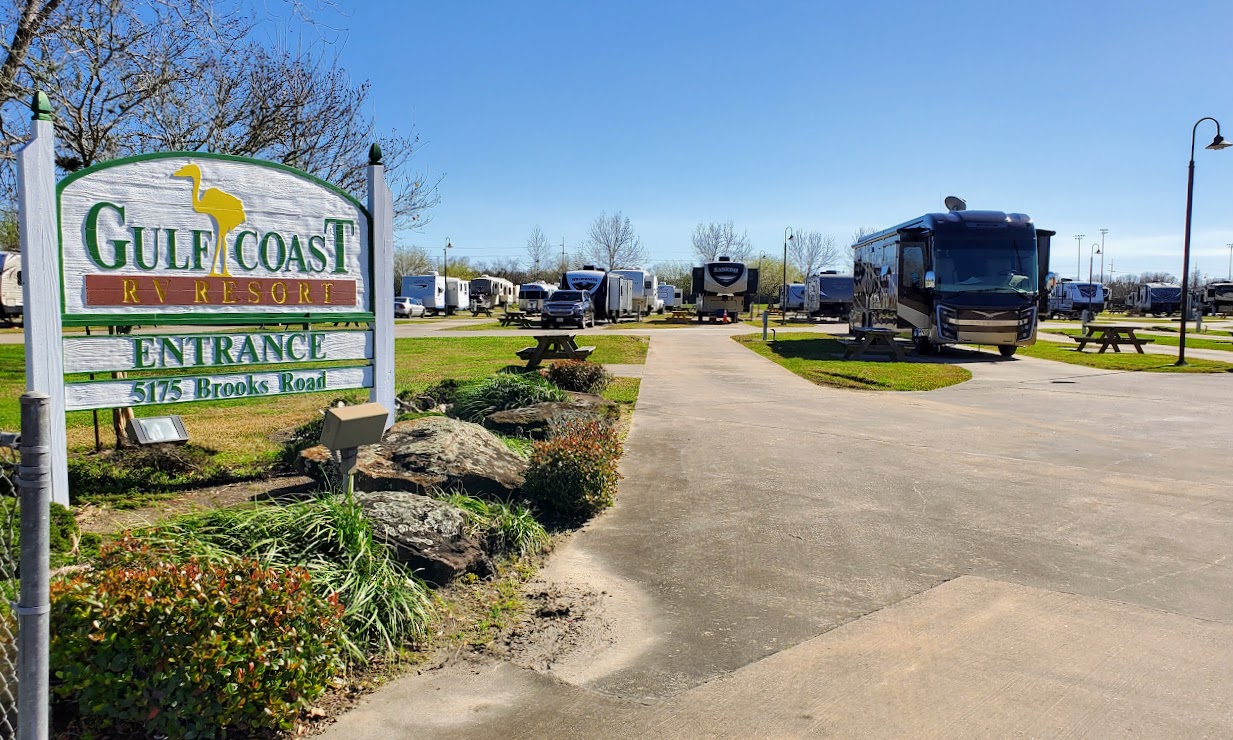 The next morning, we enjoyed a free “hot” breakfast which actually was a continental breakfast plus instant oatmeal and waffles.

Next up is a new adventure! More to come…..