Remember that song made famous by Glen Campbell in 1969? We sure did especially after we added Stella Mare RV Resort in Galveston to our itinerary, it began playing over and over in our heads. We were excited to be exploring a new destination but also a little apprehensive, primarily because we had visited the Texas Gulf Coast, more specifically Corpus Christi and Port Aransas, back in 2016 and to be honest, we weren’t overly impressed. Would there be refineries everywhere? Would the scenic beaches be dotted by hundreds of oil rigs? Would we have to dodge cars and dune buggies if we walked on the beaches? I guess we would find out soon enough!

Driving west from Beaumont, TX, rather than dealing with the hassle of Houston traffic we elected to take TX124, a more direct, faster and hopefully much more scenic route down the Bolivar Peninsula to Galveston. This route would be also involve a ferry crossing from Port Bolivar across the channel to Galveston Island.

Below is a dashcam video of the journey from Winne, TX all the way to Stella Mare including the ride down the Bolivar Peninsula, the ferry ride and the trip down Seawall Boulevard in Galveston. About 2 hours compressed to a little over 20 minutes.

So we were merrily rolling along on TX124 when suddenly…..

EEEKKKK! I shrieked, scaring poor hubby who quickly asked “what’s the matter? Did I hit something?”. “No” I responded excitedly, “A mouse on the floor in front of my chair!” Yep, that’s right, a little rodent was

staring up at me with his beady little eyes. EEEWWWW!  Not sure who was more startled – him or me! Before Rob could look, he was gone! Darn, he wouldn’t wait to pose for photos.

It really wasn’t a total surprise to see the critter – for the past few days we had heard some noises under the sink and our mighty hunter, Sparky, had parked himself day and night in front of the kitchen cabinets. When the mouse appeared, lucky for him our mighty hunter was sound asleep in his usual travelling spot behind the couch. Big help he was!

Because mice (and other rodents) love to chew on wires, causing all sorts of havoc, a visit to the local Walmart to purchase a couple of mouse traps was a priority.  If only the little critter had cooperated and left the premises willfully, he could have continued his residency as a Texan. Instead he is now a member of the Big Cheese community in the sky. Initially we weren’t sure if we had more than one mouse but thankfully we haven’t seen (or heard) any evidence that he brought along other family members or friends.

After settling down from that excitement, we once again started to enjoy the pleasant scenery which fluctuated between small oil drills in large fields, views of the beach and tall houses on stilts. 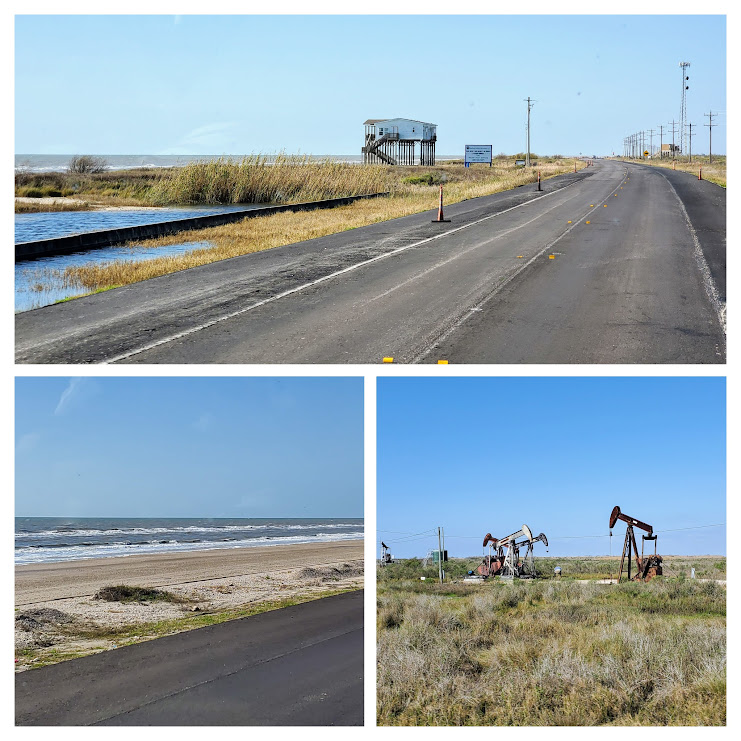 Arriving at the Bolivar Ferry Landing, we would take a free (yep, that’s right, totally free) 18 minute, 2.7 mile ferry ride across Galveston Bay onto Galveston Island. This service has been provided by TX-DOT 24 hours a day since 1934. They normally have at least two double-ended ferries running but during peak high demand seasons, there can be up to five ferries running at any given time. We were there on a Saturday morning during the off season and it wasn’t very busy so there were only two ferries running.

Pulling up to the ferry landing, there were a few cars ahead of us but our timing was perfect and we were boarded nearly immediately. Pretty big ferry, it was a double ended design that can carry approximately 70 vehicles (or six 18 wheelers), 500 passengers and 6 crew members. Vehicles can not exceed 80,000 pounds, the maximum length is 65 feet, maximum height is 13.5 feet and the maximum width is 8.5 feet. We are 43,000 pounds, 63′ long with our Odyssey tow, 13′ tall and 8.5″ wide so no problem for our behemoth! 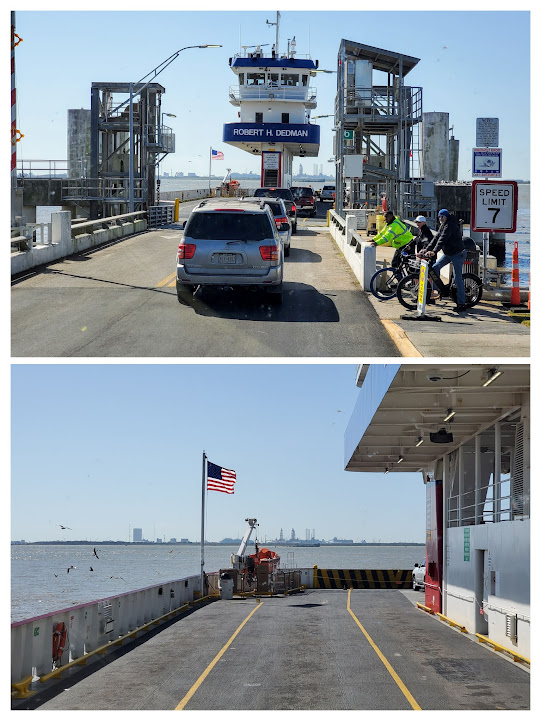 Fortunately we had one of the best spots on the ferry, the first spot on the port side next to the lifeboat with a clear view of our destination. It would have been nice to get out and walk around, perhaps we would have seen dolphins frolicking in the waves. But unfortunately it was a pretty chilly, windy day and the waters were a little rough so we stayed inside for the duration of the ride. Good thing – a couple standing near the bow was deluged by water coming over the bow! This was a fun experience with absolutely no issues for our big rig so we can enthusiastically recommend it.

Once we disembarked onto Galveston island we headed south on Ferry Road which eventually intersected with Seawall Boulevard.

We noticed that unlike other beaches we have been to along the Florida and Alabama Gulf coast, there were no stretches of beautiful white sand or emerald hued water. Instead the beach sand was more, well, sand colored and the water looked brownish, murky and not particularly inviting. Proof of that was explained in one of the island’s brochures which said “the water off the coast of Galveston is turbid, meaning it lacks clarity. This turbidity is a result of suspended solids in the water like sediment, plankton and microorganisms. The ocean and bay floor around Galveston is shallow and covered in very fine silt. This means that the wind and waves can easily disturb and suspend the silt in the water. On a calm day, the water around Galveston is actually a lovely shade of blue.” 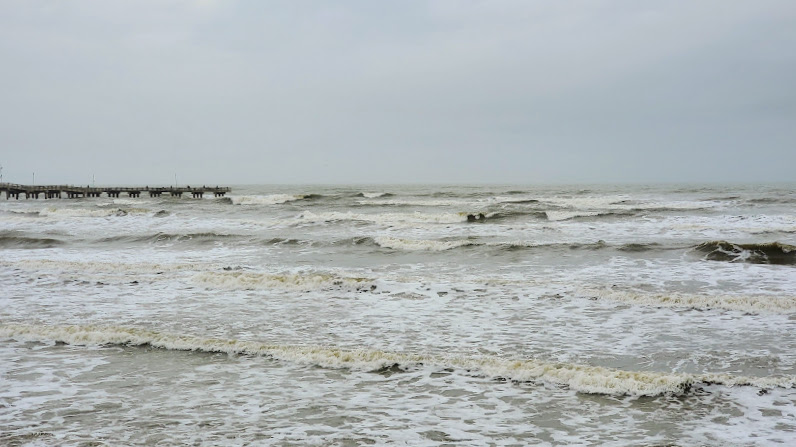 Anyway, driving down Seawall boulevard, it quickly became evident that this was a happening place!  The main boulevard spans miles and miles of beach, uninterrupted for the most part by any buildings on the beach side and bordered by a gorgeous sidewalk for walkers, runners, cyclists and surrey riders. The other side of the boulevard consists of a wide variety of shops, restaurants, hotels and attractions. There was one typical beachfront tourist area called Pleasure Pier which has all sorts of rides and amusements, but the vast majority of Seawall Boulevard was pretty low key. Wow, this was a lot better than we expected! 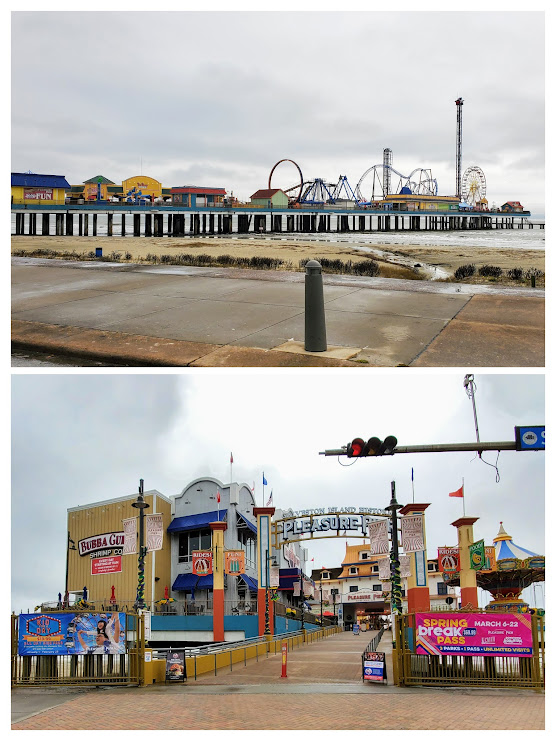 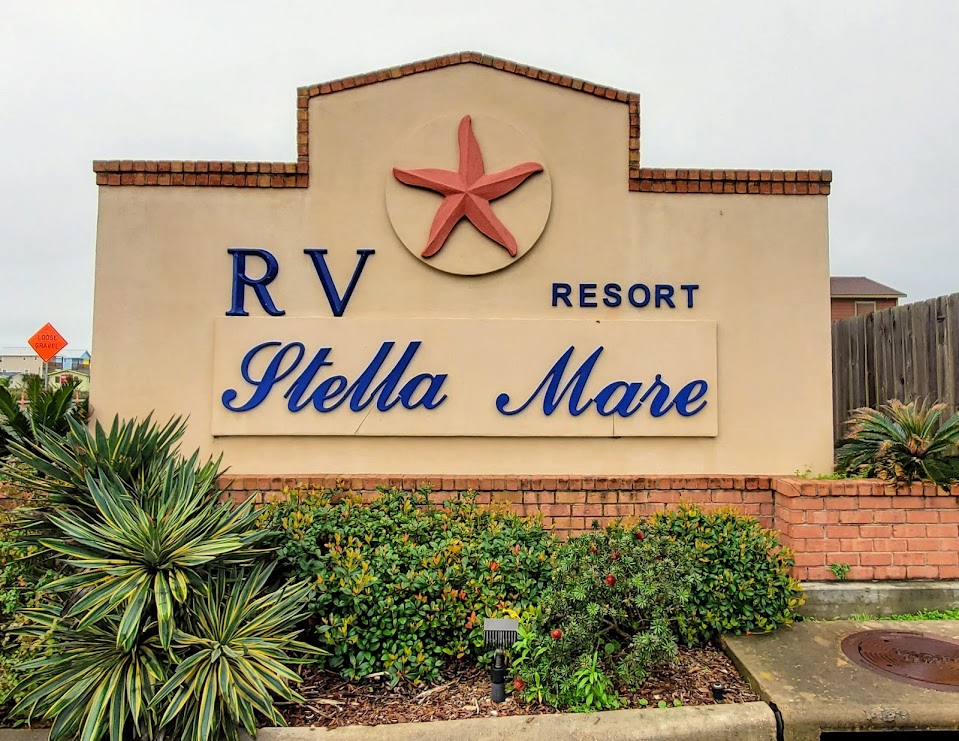 , was our destination for our week long stay on the island. It is a relatively new resort located about 9 miles southwest of the ferry dock and on the southwestern side of the primary populated area of the city. As such it is in a relatively quiet area but still near most shopping and attractions.  As soon as we pulled into the driveway, we were met by a staff member in a golf cart who instructed us to follow him to our site #122. This resort parks you on your site, then at your convenience you visit the office to check in, nice!

As soon as we settled in, we walked up to the office. Gorgeous views of the gulf, the pool and the resort from the upper deck!  Although the sites were a bit closer together than we like, overall it was a lovely, well run resort and we would definitely return. 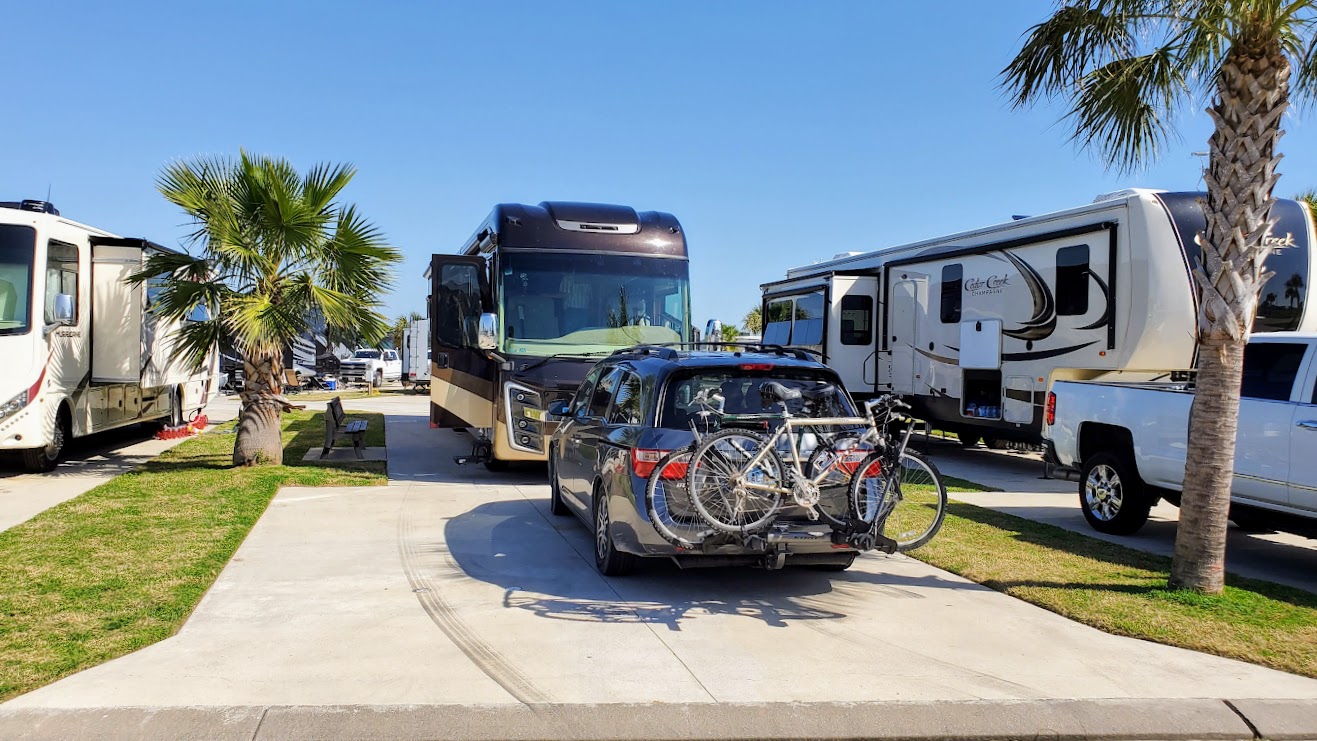 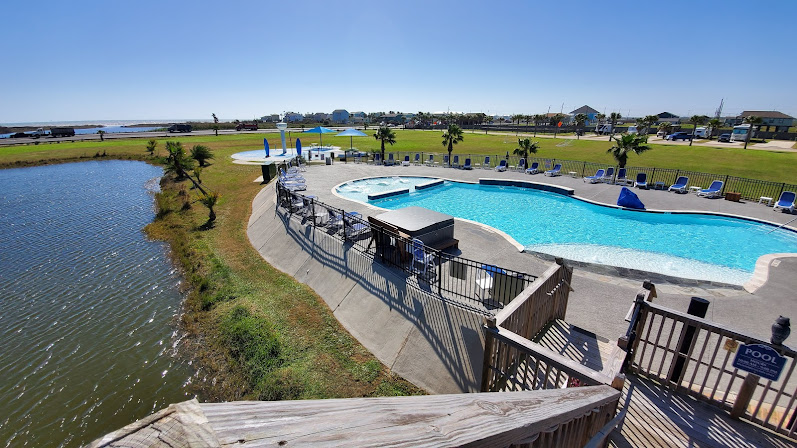 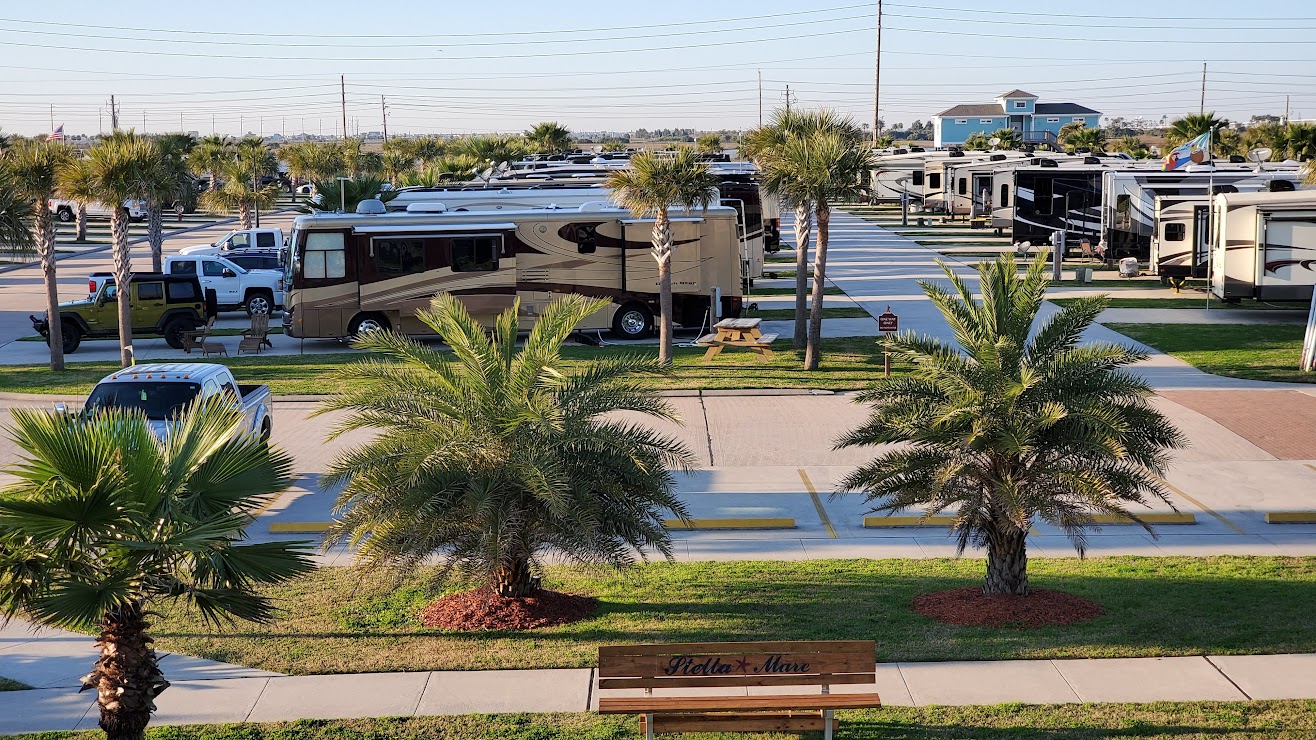 Taking a drive that afternoon, it quickly became obvious from the get go why this is a popular tourist destination. Thirty two miles of beaches, the Strand with its historic buildings, restaurants and shops, the self guided tree sculpture tour, Moody Gardens, Schlitterbahn Waterpark, historic Pleasure Pier, historic mansions and unique museums including the Bryan Museum, the Texas Seaport Museum, Ocean Star Offshore Drilling Rig & Museum and the Galveston Railroad Museum, the list goes on and on!

It was a very busy week, lots of sightseeing to write about so stay tuned!