Well, here we are back “home” in RI. We arrived on May 8th, parking the beast at our usual spot at Sun Valley in East Greenwich. Ah, yes, it was good to be home again! 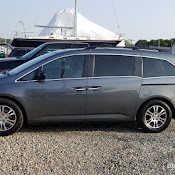 Our first priority should have been getting Quantum Leap ready for launch but circumstances conspired and we had another priority. Our 2007 Honda Odyssey which had over 97,000 miles on it, started having some problems and was also due for a major service point – items that were going to be somewhat expensive to resolve. This precipitated a discussion – sink a bunch of cash into an aging vehicle or invest that cash in a newer one? Also, did we want to stick with an Odyssey which has served quite nicely as our rolling storage shed, or switch to the smaller, lighter Honda CRV, or maybe even something else?

After much deliberation, the decision was made – it was time to upgrade to a newer Odyssey, but it had to be a 2013 or older. Why a 2013? Honda changed the transmission after 2013 and the newer models can not be flat towed. Actually the 2006-2013 are not “officially” flat towable either, but there are internal documents from Honda that advise there should be no problems if proper procedures are followed. Our 2007 has been flat towed about 45,000 miles with no issues and it had the same P36A/B36A type of transmission as the 2013. FYI, the Remco site provides great info about the tow-ability of specific vehicles.

So after visiting several dealerships and “playing the game”, we found a 2013 Odyssey that was Honda Certified and in very good condition with only 32,000 miles on it. Honda Certified status adds a one year/12000 mile bumper to bumper warranty and 7 years/100,000 miles on the drive train. Sold! 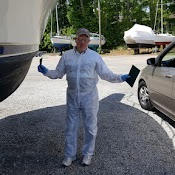 With that chore out of the way, we could now focus on the boat. Things were a little different this year as we didn’t have a specific launch date. However, on May 22 we 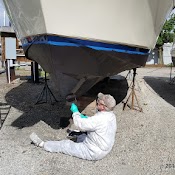 were told by the club steward that if the boat was ready we would be launched on May 25th. Since we hadn’t even started yet that sounded like a challenge!

So on Monday, the 23rd, our fire drill commenced, doing everything we needed to do in prep for launching (painting the bottom, waxing, etc.) in just two days. Amazingly despite some not so great weather we were done by end of day on the 24th! And that included a full new coat of bottom paint, not just a touch up as in previous years. It must be that we are getting older, or maybe it was because we were rushed, but it sure seemed like a lot more work this year. Even Rob was moaning and groaning, saying that next year he would hire someone to do all this work (hmmm, we’ll see how that goes).

On launch morning the 25th, we started early with a breakfast at Dante’s Kitchen. Although you can get your typical bacon and eggs here, most of the menu items are 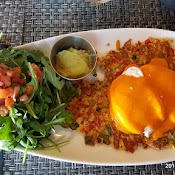 very unique which of course comes with a higher price. Yep it costs more but with the delicious food, super service and excellent presentation, it’s worth it! I had the Veggie Harvest Fritter which was two poached eggs topped with a red pepper sauce on a veggie fritter served with a side salad and avocado mousse. Delish! Rob had the Huevos Rancheros  – two fried eggs, grilled corn tortillas, beans, cheddar, mamaita sauce & crema with home fries. Another yummy choice! 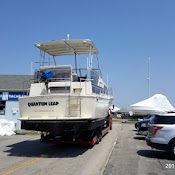 turned that we were one of the last boats to 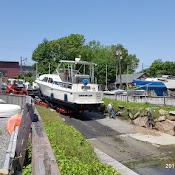 launch that day which was convenient as we had a few last minute items to attend to and were able to lay down another full coat of wax on the hull.

Although we are used to it, after so many years in boating, we still get a little nervous watching Quantum Leap making her way down the road on the trailer to the boat launch. But once again RI Boat Haulers and the yacht club staff did an outstanding job! 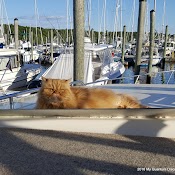 the boat was in the water it took us a few days of non stop work to get her cleaned, set up and stocked for living aboard. Seemed like we took half of the contents of the coach and moved it to the boat!

Finally we were living on board. 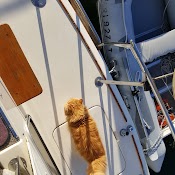 Wonderful to be back on the water full time, watching beautiful sunsets, early morning sunrises and enjoying short cruises around the cove in the dinghy. We are so fortunate to have this really cheap waterfront condo in such a nice area. The kitties seemed pretty happy as well, plenty of fresh air for them with lots of activity and birds to watch. 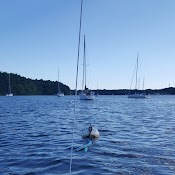 More nautical news. Back in March, we received a call from the East Greenwich Parks and Recreation Department. In 2007 we had filled out an application for a town mooring in the cove. Here we were 9 years later and finally there was a mooring permit available for us. Heck yes, we’ll take it! No plans to give up our slip, but it will give us someplace to escape to if we want to get away from the dock. More importantly if there is a hurricane or bad storm in the forecast, we could move the boat to the mooring where it would be a lot safer than at the dock.

Once living back on board QL, 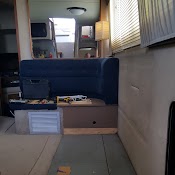 we decided we needed to replace our very uncomfortable settee in the main cabin. After doing some research and visiting a few local furniture stores 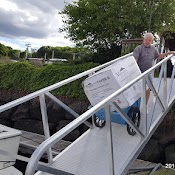 (with exorbitant pricing), we ended up purchasing from Amazon. We found a dual recliner love seat with compact dimensions that would fit the available space for 1/3 the cost of shopping local. 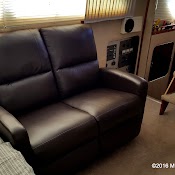 places to store his tools, screws, parts, etc. which he had organized underneath. And then it was fun getting the new huge boxes from the car to the boat, then somehow squeezing the the 4 snap together sections down the narrow companionway into the boat. But well worth it – it is so much more comfortable.

Of course that has created several new projects – there was no carpeting under the settee so now we have to piece together new sections from remnants of the old carpet. Rob needs to design and build a new cabinet over the remaining section of the settee (the base can’t be removed because it houses the A/C unit and inverter). Guess those will go on the 2017 project list! 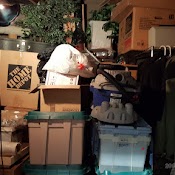 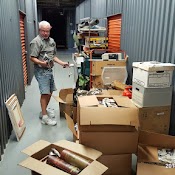 on our list of to do items for this summer was to clean out our very crammed, overstuffed storage unit, something we have been talking about for the past three years. Not a fun task but it didn’t take as long as we thought it would. After three days of hard work, we had managed to eliminate about 30 boxes of “stuff”, donating a lot of it, throwing out a lot and selling the more lucrative items on eBay and Craig’s List (thus far we’ve made about $2000). Still lots more to do but at least now we have some walking room. 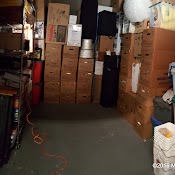 And last but not least, 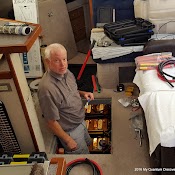 there was the 4th! When we first arrived back in RI, we thought we might cruise to Newport to spend the 4th of July but it wasn’t meant to be. Our boat house batteries had finally given up after 12 years, so no cruise was on the horizon for us.

Rob had ordered six replacement batteries from Florida but they didn’t arrive until July 2nd. So instead of relaxing in Newport, he spent part of the 4th of July weekend in the bilge installing those. 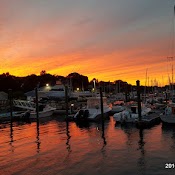 No need to feel too sorry for us though because of all the work we were doing (not that you were, I’m sure!). We’ve had phenomenal weather and a lot of fun times, enjoying our excursions in the dinghy and getting together with our EGYC friends and visits with family.

For the first time ever, the town of East Greenwich had fireworks in the cove on the 4th. So after taking a dinghy ride that afternoon, we watched another spectacular sunset followed by an awesome display of fireworks viewed from the bow of the boat. Totally awesome! 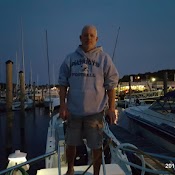 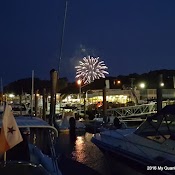 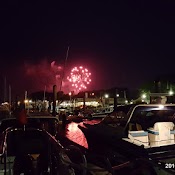 And last but not least, the usual eating out (you knew I would eventually go there, didn’t you?).

Twin Oaks Restaurant in Cranston, Ritrovos Pub in East Greenwich, Gel’s Kitchen in West Warwick, Oatley’s Restaurant, Jason’s Restaurant & Sushi Bar, Red Stripe and Coastline Diner are some of the restaurants we’ve patronized. Since I’ve written about these places in a previous post, I won’t 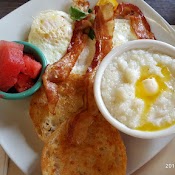 bore you with the gory details of our visits this year.  On the way to pick up our new Honda in MA, we stopped at a new place for us, JP Spoonems in Cranston, where we had an excellent breakfast, complete with grits no less.

We’ve also enjoyed take out pizzas from Uncle Tony’s Restaurant in Cranston and another new place for us, Cobblestone’s Wood Fired Pizza here in East Greenwich. Highly recommend their pizza and subs. 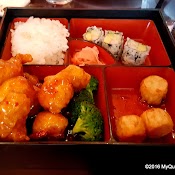 And then further afield, there was the Kyoto Japanese Steak House & Bar in Mansfield, MA where we had lunch with our friends, 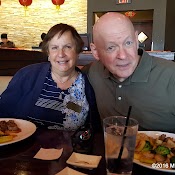 Celeste (also our favorite dental hygienist) and her husband, Rick. Rob and I both had the General Tso’s Chicken Bento Box served with Miso or Mushroom Soup. Food was excellent as was the company!

So that wraps up our summer thus far. Not sure what the rest of the summer will bring, guess y’all will have to stay tuned!