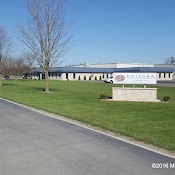 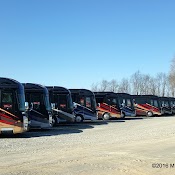 So you are probably asking, weren’t we just at Entegra last October? Yep, we were. But during our subsequent travels, we discovered that several of the previous punch list items hadn’t been totally resolved. And hey, we like it here, it’s comfortable and like going home. We also planned on attending Entegra’s Springfest rally the week of April 18th, so it made sense to schedule our service at the same time.

Here’s a list of the items on our list for this visit. By the way all of this is still covered by warranty and our coach turned 3 years old on April 12, 2016, the customer care at Entegra is hard to beat!: 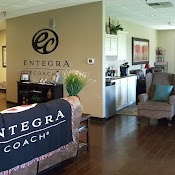 We arrived in Middlebury, IN on a somewhat wet and cold day (alas there was snow on the ground in a few spots) and the forecast for the week called for daytime temps in the 40’s during the day and in the 30’s at night. There were lots of coaches expected in service that week which 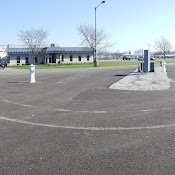 translates to lots of pooches in the Service Lounge.

Since we were here last October, Entegra has doubled the number of service bays and added 10 new overnight “sites”. That’s a good thing as Entegra now has 2600 coaches on the road. Wow, big change since 2013 when they only had about 900! Growing fast! 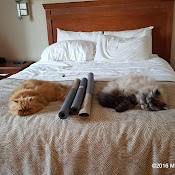 To avoid all the pooches in the lounge and the logistics of litterbox transport and allocation, we once again decided to move ourselves and the kitties to the Candlewood Suites in Elkhart for the week, starting on Monday. That way everyone (mostly us) would be more comfortable.

On Sunday night, we prepared for an early day on Monday and got the van packed with the majority of our “stuff” (seemed like it was half the contents of our beast), then went out to dinner with friends, Betsy and Nancy to Ruilli’s Italian Restaurant in Middlebury. Yep, this is Amish country so dining options on a Sunday are virtually non-existent and this was pretty much the only game in town. I had Shrimp Farafelle – bowtie pasta, shrimp (so small you could barely see them), pea pods & tomatoes sauteed in garlic butter sauce ($11.99) while Rob had lasagne, also $11.99. Entrees came with a trip to the salad bar. Food was okay (sorry no pics), doubt that we will return here soon. 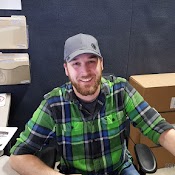 On Monday morning after a relatively late 8:30 AM meeting with Owen, our friendly, efficient and all around awesome Service Coordinator, we headed over to Candlewood Suites where they were 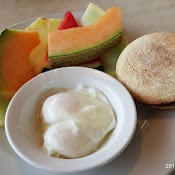 nice enough to let us do an early check in.

Once the kitties were settled in, we went out for breakfast at nearby Callahan’s Restaurant. Heck, nothing had changed since our last visit, remember this is the land where 1 = 2, 2 = 4 and sometimes 2 = 3! 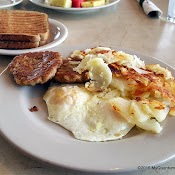 Eggs that is!  I ordered one of their healthier options – two poached eggs, fresh fruit and an English muffin, explaining to the waitress that I really only wanted two eggs, not three, four or five! It seemed so foreign to me that you should order one egg to get two! Rob had two eggs (by ordering one egg) with homemade sausage patties, home fries and wheat toast. Both breakfasts were excellent! In fact it was so good, we went back several times during our stay in Elkhart. 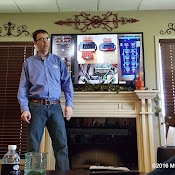 On Tuesday we took yet another factory tour at Entegra. I think we’ve done this tour about 5 times, but this time we were anxious to see the new 2017 models being built and to hear about the changes. PJ, one of their more experienced techs was our tour guide and he was excellent. After the tour, we returned to the Customer Service Lounge where PJ gave an Entegra Tips class, covering various components of our coaches. Great class! We were pleased to learn from Joyce Skinner, Director of Entegra Customer Service (and a good friend), that they are planning on having more of these educational sessions for their customers in the future. 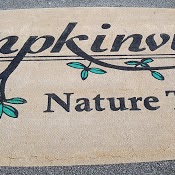 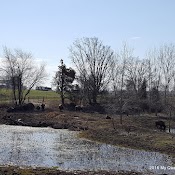 In between checking in with Owen every day in Service, we found some time to do some walking on the Pumpkinvine Nature Trail in Middlebury. This particular paved walking and biking path along with the Maple City Greenway and the MapleHeart Trail is part of a regional network of trails that connects Elkhart, Goshen, Middlebury and Shipshewana. Parking for the Nature Trail can be found very close to Camp Entegra in a small 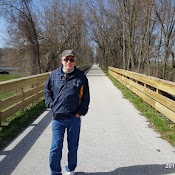 lot at the intersection of CR22 and CR37. From this point the path heads out in two directions, which one to take? We did both following one section which makes it way towards the main town center of Middlebury, then on another day we meandered our way through farm country, passing by a small corral with bison and lovely Amish farmhouses. Every now and then an Amish person would pedal by us on their bikes.

And of course, no trip to the area would be complete without a visit to our favorities – Guggisberg Cheese for some Amish Creamery Cheese and to 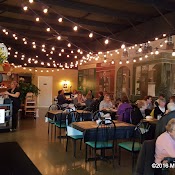 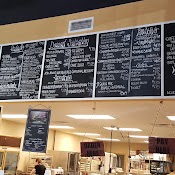 Besides Ruilli’s Restaurant, we managed to explore a few other new restaurants and revisit a few of our favorites. Aunt Karen’s Cafe located just down the street from Entegra, a revisit to 41 Degrees North Restaurant and a first time visit to Heinnie’s in Elkhart. Rather than writing about each restaurant here, I’ve updated our Indiana Eatin’ post with details of our latest 2016 visit.

On Friday, the 15th, our coach was ready so we checked out of the Candlewood Suites, 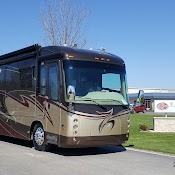 loaded all our stuff back into the van and headed back to Entegra to pick up our coach. After close inspection and testing, it appeared that everything was fixed properly.

But we weren’t leaving Indiana just yet! As mentioned above we had signed up for Entegra’s Springfest, from April 18th to April 21st, an event filled with workshops, another factory tour, a gala dinner at the Elkhart RV Museum and a Roaring 20’s themed dinner. Our plan was to spend Friday and Saturday nights at free Camp Entegra, then move to the Elkhart Campground on Sunday. Stay tuned for some fun times!