It’s been awhile. It seems that staying in one place for an extended period of time causes me to lose my blogging momentum. Since we hit the road again in September, I’m already way behind. Guess it’s time to catch up!

Hot and steamy – that definitely describes our summer in RI. A sharp contrast to the cool weather we enjoyed during our trip to Maine in June! Yes, we Northerners are used to a week or two of high heat and humidity but not an entire summer of it! With temps over 90 degrees and high dew points every day, it felt like a perennial steam bath! And officially, weather records were broken too with several official “heat waves” and many days with new record highs. 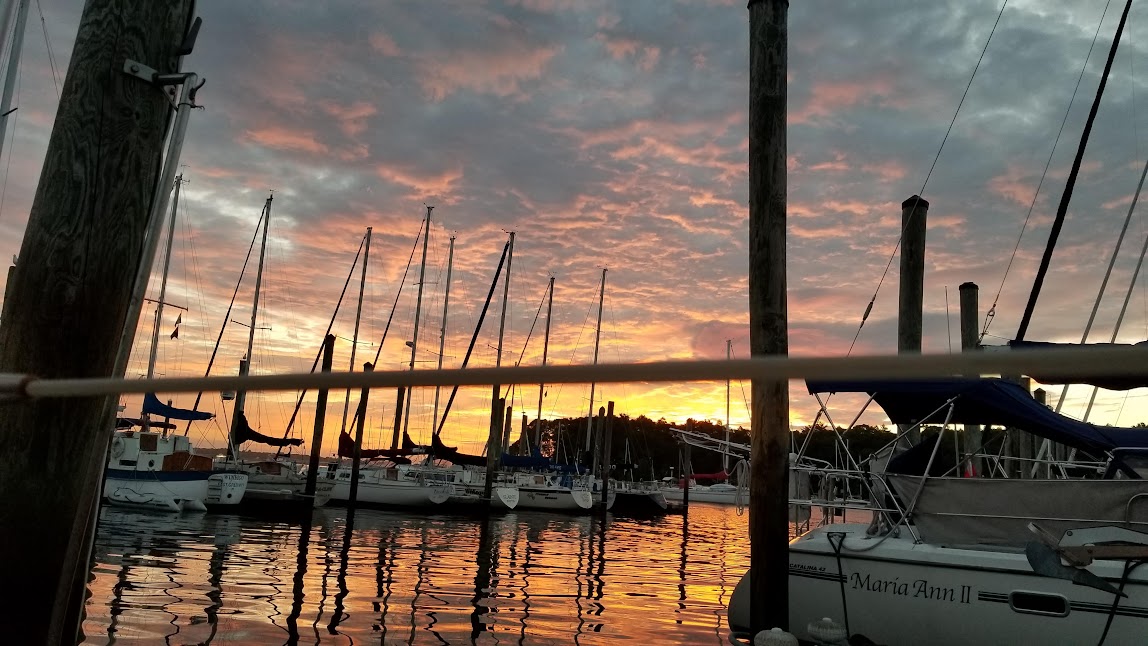 Although our boat does have AC, it isn’t able to keep up with the high temps and humidity so we decided not to move on board right away, figuring we would wait for cooler temps. HA, little did we know that those temps were not going to fall anytime soon! Although it was disappointing not to spend the entire summer on the boat, the good news is that Rob was able to complete a number of projects on the coach.

The cabinets on each side of our new recliner couch are now done and look totally awesome. Rob added a deep pullout in one side table that is convenient storage for our laptops. Plus he added a storage drawer underneath the middle section of the sofa. We’ve learned from other Entegra owners that the newer models of the Lambright couches now come with a built in middle drawer. 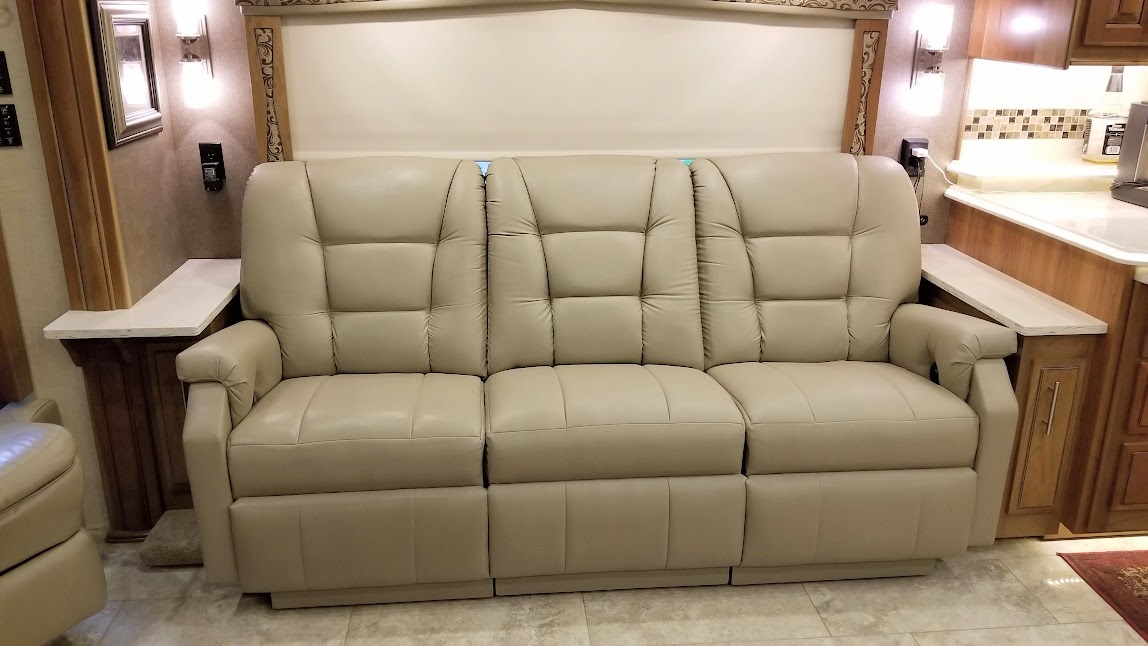 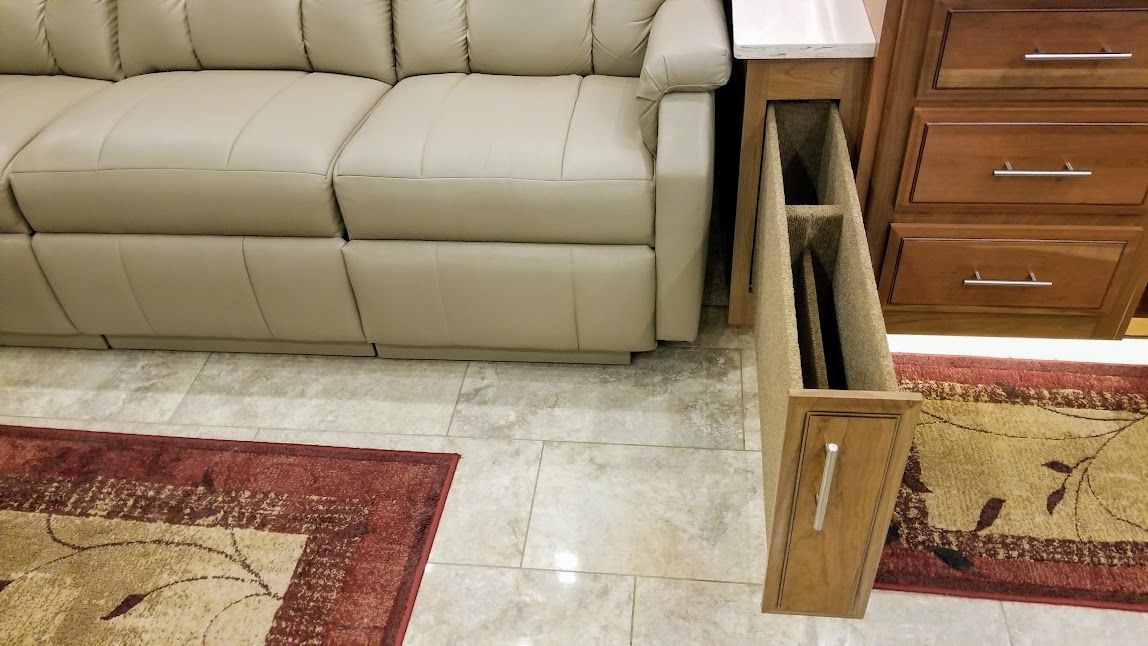 Last year Rob started a project to convert all our cargo door latches to electric lock/unlock. Having to manually lock/unlock 13 basement doors has always been kind of a hassle. The Entegra Aspire does not come with electric locks, but the Anthem and Cornerstone do, so he was able to figure out the parts required by using one of the other coaches as a model. The project was still very labor intensive, however, because the inner skin of each door had to be cut out and a lot of new wiring was required. Nevertheless, the end result is exactly like the factory installation and a huge boost in convenience.

As if that wasn’t enough, Rob also managed to find a way to automate all of our lights so they could be turned on, off and even dimmed, through an interface he built using a Raspberry Pi and writing some software to communicate with the on board RV-C network. Besides an “app” that works on our phones, he took it another huge step further, by integrating the system with our Amazon Echo! Now we can issue voice commands to Alexa to control the lights either individually, as a group, or by “scenes” such as “bedtime”, “kitchen detail”, “watch TV”, “dinner time” etc. He’ll probably be publishing a post about this at some point in the near future.

The not so good news was that our van started to have transmission problems. In a situation where we had to slow down at a light, construction or whatever, the transmission would intermittently slip into a neutral, thus creating a dangerous situation especially when pulling into traffic. Long story short, we ended up having a “new” (used) transmission installed. That was a budget buster.

At the beginning of August, despite that record string of heatwaves, we decided the heck with the heat and moved down to the boat to live aboard for the month. Although we didn’t move from the dock, we thoroughly enjoyed our waterfront property! 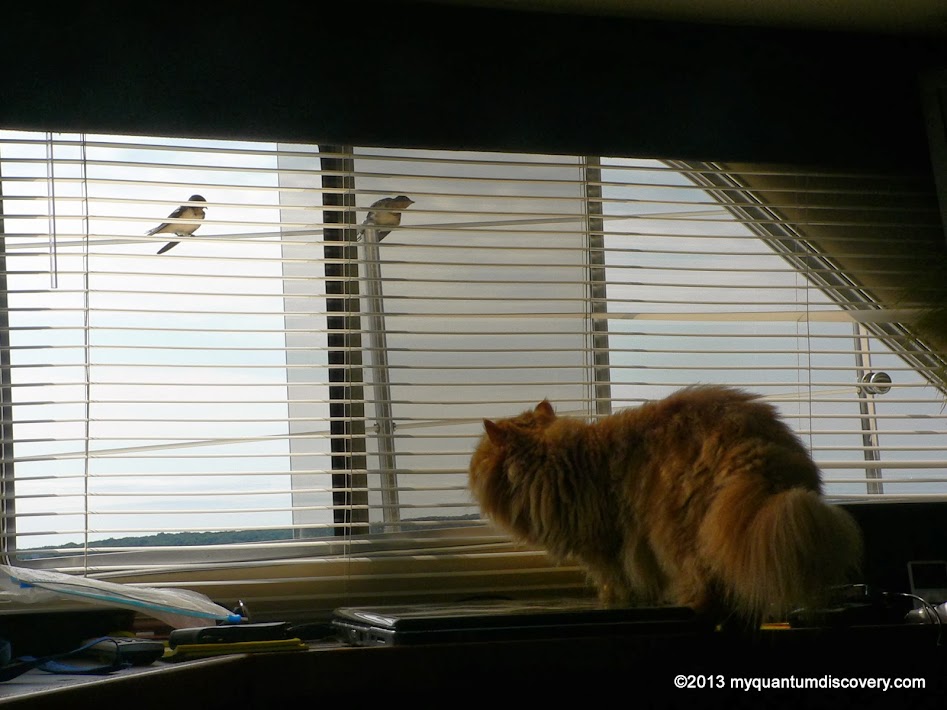 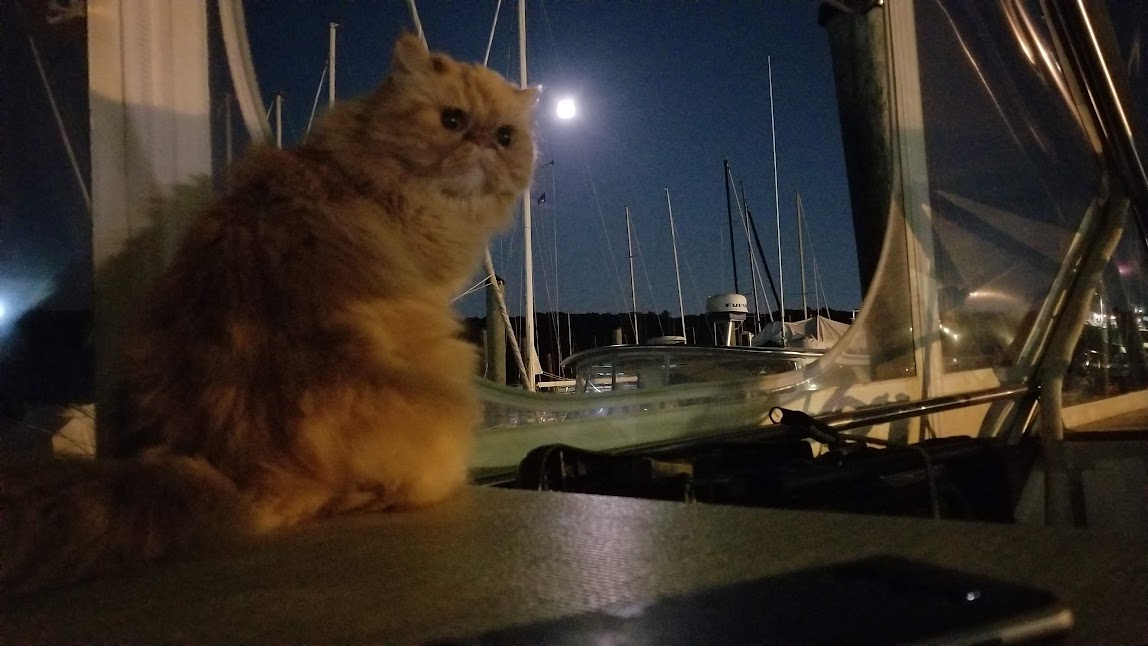 Besides frequenting our favorite restaurants and trying a few new ones (several have been documented in our East Greenwich Area Eateries post, some new ones we didn’t mention because they weren’t that good), enjoying lots of lobster, going to the Farmer’s Market in Goddard Park every Friday, doing the usual mundane errands, visiting with family and friends and spending several days in August driving back and forth to MA for annual visits to our dentist, eye doctor and medical doctors, the rest of our summer was fairly uneventful. 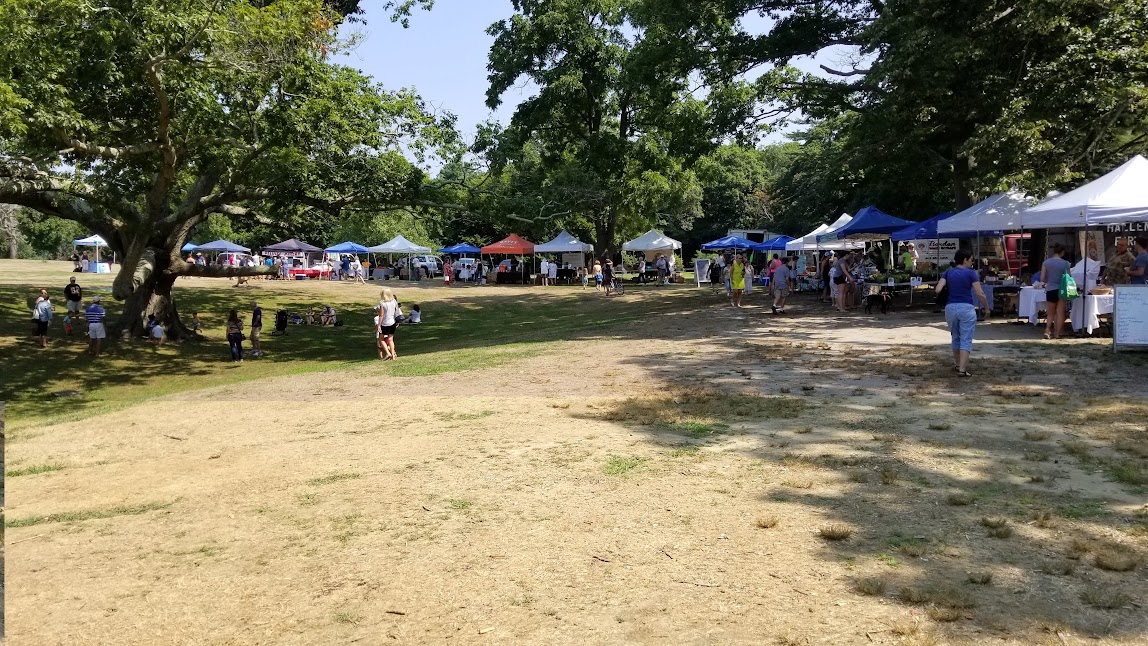 It seemed like we had just moved aboard the boat when it was time to do everything in reverse. Although our boat wouldn’t be hauled out of the water until September 28th, we had to get her ready before we left RI on September 6th. Unload everything we brought down what seemed like just a few days before, take down the enclosure, winterizing all the water lines, etc.

On September 6 we would be hitting the road heading for Entegra in Middlebury, IN for a September 12th appointment which would be our last opportunity to have any remaining issues fixed under our 2 year warranty. We had a few things that needed addressing but they were mostly minor. Sparky was happy when we told him he wouldn’t have to get up at the crack of dawn each day since we would be staying at the pet friendly Candlewood Suites in Elkhart. We also would be visiting Spartan Motors, a couple hours north in Charlotte MI, for our 2 year scheduled maintenance on the coach chassis.

On The Road Again:

So off we went on the 6th, making our usual two night stop at Arrowhead Marina & RV Park (see our review) to visit Rob’s Dad in Albany. 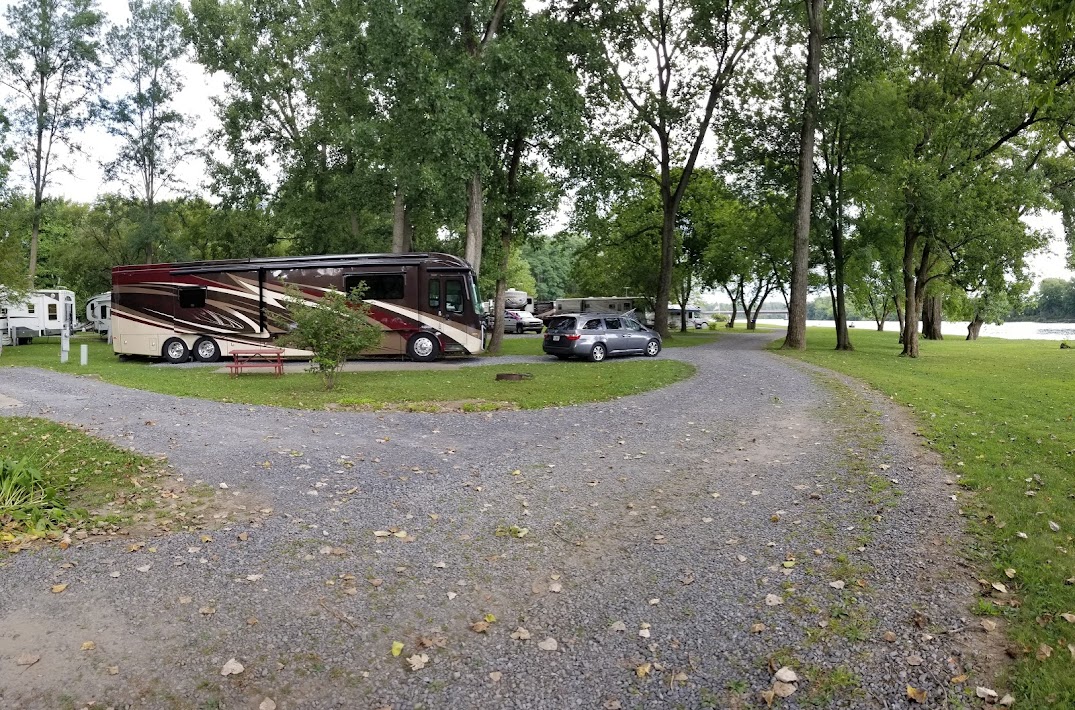 From there we next stopped at Kanakadea County Park in Hornell, NY. This was the first visit for us at this park and it was a very pleasant experience. 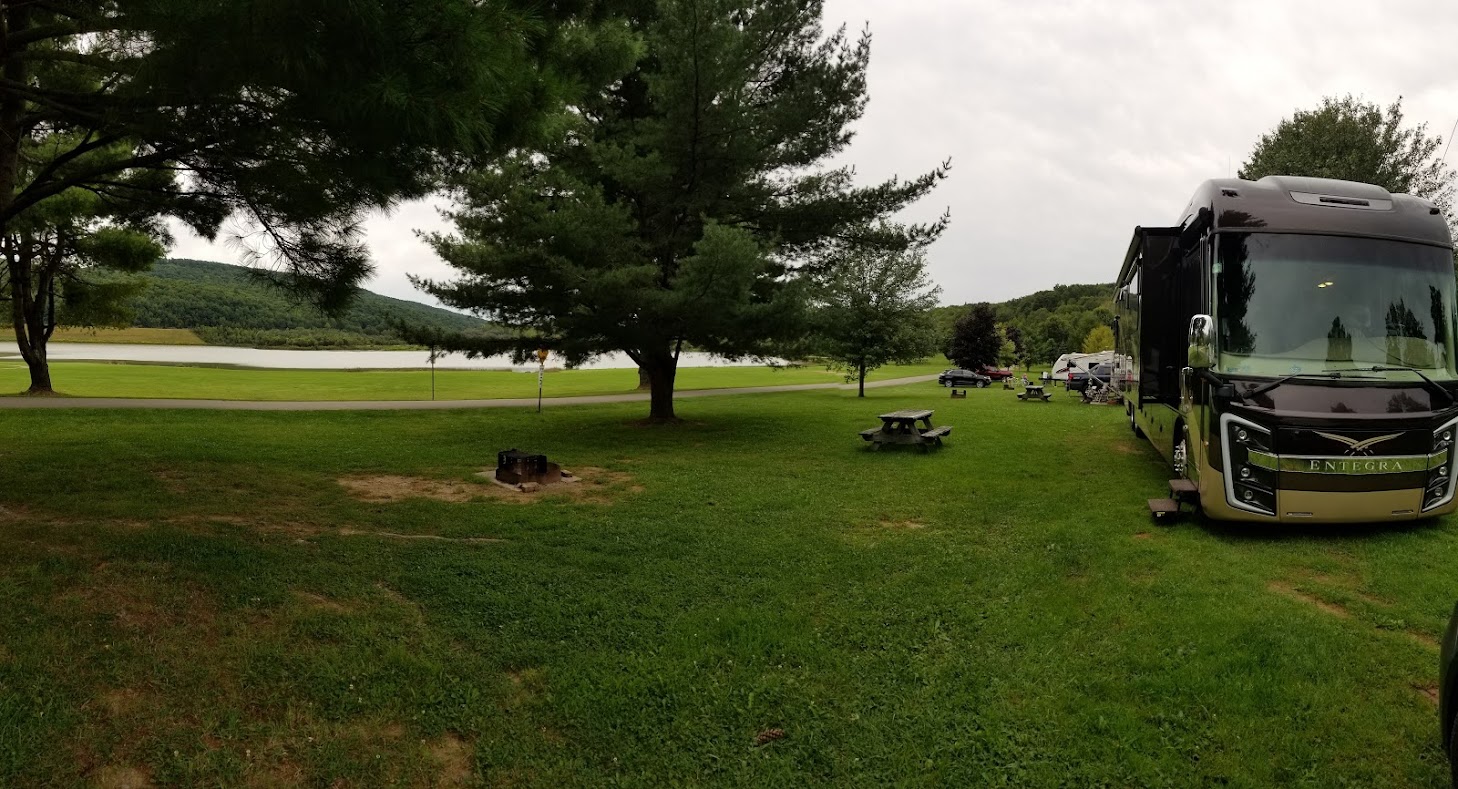 Our next stop was at Indian Creek RV Park (see our review) in Geneva On The Lake, OH, a park that we have stayed at several times because they offer Passport America for mid week stays. The day of our departure from Indian Creek we patronized one of our favorite breakfast joints, Mary’s Diner which has a huge parking lot, making it easy to park the rig there.

Our last stop before reaching Entegra in Middlebury, IN was an overnight stay at Sauder Village RV Park (see our review) in Sauder, OH where we had stayed once before several years ago. Not a bad RV park site wise, but it didn’t seem very well maintained. Given the hefty rates I doubt that we will be returning there any time soon. 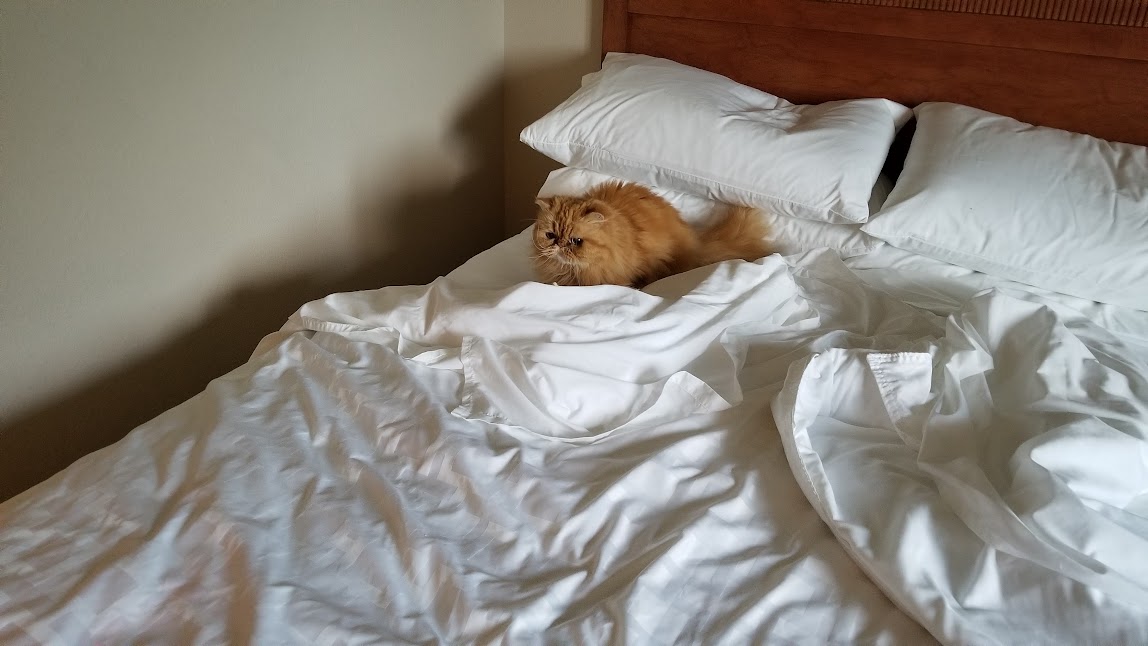 When we arrived at the Candlewood Suites in Elkhart, IN on the afternoon of September 11th, we did what we usually do – park the coach in a nearby empty parking lot, pack up all of our stuff, drive across the parking lot to the hotel, transfer everything to our room (including Sparky), then drive the coach to Entegra, about 25 minutes away. Entegra has about 18 sites with 50 amp power, so if it was just us we would stay in the coach, which would be way less costly. But, we have learned dealing with a spoiled brat cat all day, while the coach is in the service bays becomes really old, really quick. One or two days is no big deal but this was going to be an extended visit of up to two weeks.

Nevertheless the next morning was still an early one for us since we had to drive from the hotel to meet with our Service Advisor and Tech at Entegra in Middlebury by 6:30 a.m. Not used to being up and on the move while it is still dark out. Fortunately we made it on time!

More about our stay in Elkhart, our service appointments and the things we did to pass the time in our next post!