Located on the Mohawk River, this “resort” which is open from May 15 to October 15 has 64 mostly shady sites (both pull-thru and back ins), with 50 foot parking pads. 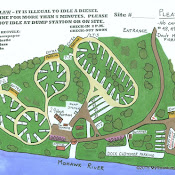 Sites have water and electric, either 30 or 50 amp, cable and free wi-fi. Many of the sites do not have sewer but that shouldn’t be an issue as there is a dump station and they also offer a portable pump-out service on Tuesdays and Fridays for a fee of $6.00. There is a small store with camping and boating supplies, modern rest rooms, a laundromat, docks and boat launch on the premises as well.

Rates:
Daily, weekly and monthly rates are available here. They offer a 10% Good Sam Discount. Credit cards not accepted – only cash or checks. 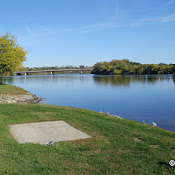 Having been here a number of times, 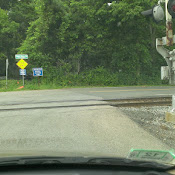 we’re used to the rather spooky road to get to the campground. A short distance down Van Buren Lane which is marked “No Outlet” there is a tight right hand turn immediately across the railroad tracks! Nothing that can’t be handled, just not what you would expect for a campground listed in the Big Rigs Best Bets directory. As we cross the active railroad tracks, we always hope that the crossing gates won’t activate in the middle of our turning maneuver! 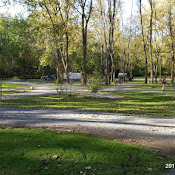 Our primary reason for staying at this campground is because of its relatively close proximity to Albany when we visit Rob’s Dad. We don’t consider it a destination campground, but for those visiting the area it is a relatively pleasant location.

Overall it is an older but decent campground with heavily wooded sites and in a very picturesque location right along the Mohawk River. The owners, Brad and Wendy, are very friendly and helpful. If a full hookup site is not available, we 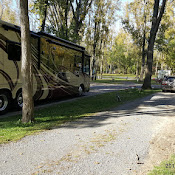 prefer their pull thru sites (as opposed to their back in sites) even though they are only 30 amp as they are fairly long with enough room for both the coach and toad. The back in site we occupied on a previous visit (#33) did have 50 amp but 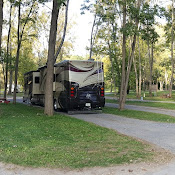 was narrow, relatively close to the adjacent site and was difficult to maneuver into because of the trees. Grass borders the gravel pads on most sites, but during one of our stays (site #48) it rained quite heavily creating a muddy mess just off the edge of the gravel. During more recent visits we have stayed on a full hookup 50 amp site #24 which we really liked. Most of the back in sites in loop 26 – 45 and pull thru sites 47- 50 do not have sewer hookups. Best to check with the office when making a reservation.

The Mohawk has exceeded flood stage on many occasions, most recently on June 28, 2013 which caused the campground to be evacuated.

If you are traveling westbound through New York, we recommend the Southern Tier Expressway (I-88/I-86). If you take I-90 from Arrowhead to I-88, there is no toll.

Size – 3/5
All sites pads (as well as roads) are process gravel and tend to be on the narrow side. The gravel remains fairly firm, but the adjacent grass and dirt can be muddy after a rain. Pull thru sites are fairly long with enough room for both the coach and toad. 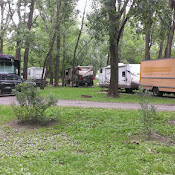 There are also back in sites large enough for a big rig but be aware that it can be difficult maneuvering into some of the back in sites due to the trees.

Privacy – 2/5
Most sites have adequate spacing between, but a few are uncomfortably tight. The pull thru side to side spacing is about average for a private campground. Although heavily wooded, there is no other vegetation to provide privacy between sites. 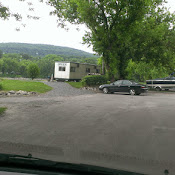 with camping and boating supplies, modern rest rooms, laundromat, docks and boat launch. The view of the river is pleasant and mostly peaceful.

Convenience – 3/5
Grocery stores, restaurants and other retail are located nearby in the small town of Scotia about a 5 minute drive from the campground. Schenectady is only 10 minutes away. Albany is about a 30 minute drive.

Physical Surroundings – 4/5
Located next to the Mohawk River with the mountains off in the distance, this campground is very picturesque. None of the sites are directly on the river shore but it is accessible to everyone staying here.

Maneuverability and Roads – 3/5
Just a short hop from I-90 and I-890, approaching the campground is easy but it gets interesting due to the sharp right hand turn on Van Bureau Lane immediately after the railroad tracks. Main loop in the campground is paved but the roads to the sites are gravel and fairly narrow but relatively easy to maneuver even in a big rig. We did not encounter any low hanging branches.

Peace & Quiet – 3/5
We’ve stayed here both during the Spring and in the Fall. Each time the campground has been relatively quiet with very little road noise from the nearby interstate and local highways. There are however fairly frequent trains passing by on the aforementioned railroad tracks and they do blow their whistle. This did not bother us but in warm weather with the windows open some might find it disturbing. 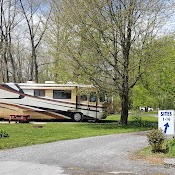 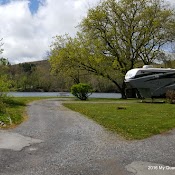 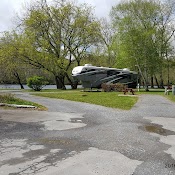 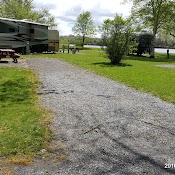 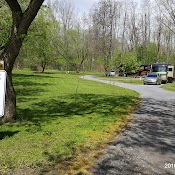 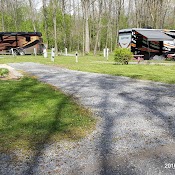 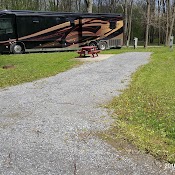 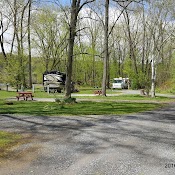 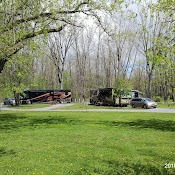 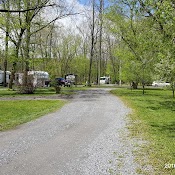 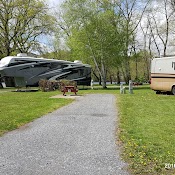 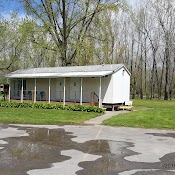 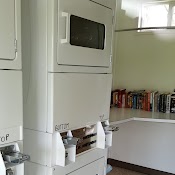 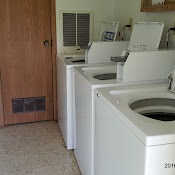 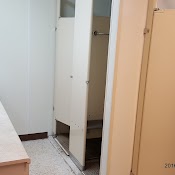 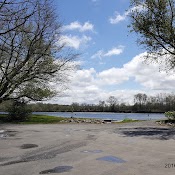 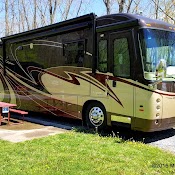