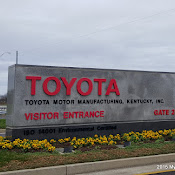 Before we were ready to say goodbye to Kentucky, we spent another day of touring. Not to worry I’m not going to bore you with more bourbon babblins! Instead we had heard about another very interesting tour – the Toyota Motor Manufacturing Kentucky (TMMK) facility, located in Georgetown. Wow, not only was it fun and very informative, it was also free.

This plant is absolutely HUGE and employs 7000 locals. Would you like to hazard a guess as to what vehicle is 2015’s most “American” vehicle? If you guessed a Ford, GM or Chrysler product, you’d be wrong. It’s a Toyota Camry! According to Fortune’s website (who based their article on the American Made Index compiled by Cars.com), as of June 29th, “Surprise #1: The Toyota Camry is, apparently, the most American vehicle on sale in the U.S.  Surprise #2: Ford fell off the list entirely this year—even though the F-150 pickup topped the list in 2013 and 2014. (A Chrysler hasn’t shown up since 2012). Surprise #3: 10 years ago 29 cars qualified as “American”, this time only 7!” 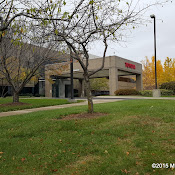 To even qualify for The American Made Index (AMI), a vehicle must be made of at least 75% U.S. parts. Other factors include where the vehicle is built, and what percentage of the vehicles’ sales are U.S. based. So the Toyota Camry is more apple pie than a Dodge Challenger which is manufactured in Canada! BTW, in case you didn’t know, Chrysler/Dodge is owned by Italian maker Fiat!

The following seven, in order of “Most American”, are the only vehicles for 2015 that meet the criteria to be considered “American” made: Toyota Camry, Toyota Sienna, Chevrolet Traverse, Honda Odyssey, GMC Acadia, Buick Enclave, Chevrolet Corvette. It’s all just branding and marketing illusion folks! Another example of how our economy has become globalized. Want to see how American you car is? Start by looking here and check “percentage” for the year you want to view. While waiting for the tour, we perused the interesting and informative displays in the state of the art Visitor Center. Because we had read that phones weren’t allowed on the tour, we left them in the car not realizing that we could take photos in the Visitor Center. However if you DO bring in a phone or camera, you WILL need to turn them in to the receptionist before the tour. To get a flavor of what this tour is like, check out this video on the TMMK website. 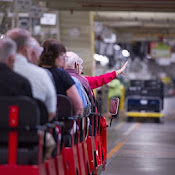 Because the facility is so huge (a mere 7.5 million square feet – equivalent to the size of 156 football fields), visitors are given headsets, wireless receivers and safety goggles, then herded onto electric trams for the 1-1/2 hour tour. Along the way, we learned that this is where nearly 7,000 team members build about 500,000 vehicles and engines annually, or as many as 2,000 vehicles every day!! That’s 2 new vehicles every 55 seconds. Wow.

Our guide explained that in addition to the Camry, which is America’s best-selling car, Toyota Kentucky manufactures the Camry Hybrid, Avalon, Avalon Hybrid and Venza, as well as four-cylinder and V-6 engines. And according to their website, “beginning late 2015, the plant will begin production of the first U.S.-assembled Lexus, adding 50,000 vehicles to its current annual capacity of 500,000 (engine production capacity: 600,000).”

Among many other things, the tour includes a visit to the loading dock where massive rolls of raw steel are delivered, the very impressive robotics performing numerous assembly tasks (each vehicle receives over 4,400 welds; 97 percent are performed by robots), various parts of the assembly processes and the final QC area including a leak test booth. The tour does not 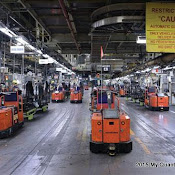 take visitors into the painting area (the most time consuming part of the build process) or the engine assembly area. One interesting thing we noted was that many of the robotic areas had only minimal lighting, giving them the eerie feel of some futuristic Sci-Fi scene. 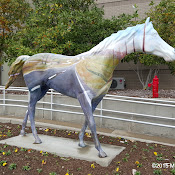 system” in which they utilize production systems such as “Just In Time” (manufacturing and conveyance of only what is needed, when it is needed, and in the amount needed) and “Judoka” (the ability to stop production lines, by man or machine, in the event of problems such as equipment malfunction, qualit 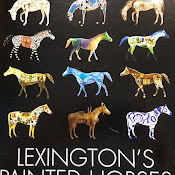 y issues, or late work) and for their efforts to reduce waste, conserve energy and protect the environment (scroll down to the Ongoing Measures section to read about some of the other things they are doing). Another slick technology we observed were the robotic AGV’s (Automated Guided Vehicles) that were scurrying around the plant delivering parts and other items to the production line without any human intervention. 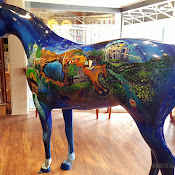 At the end of the tour back at the Visitor Center, we were given the opportunity to take a Lexington’s Painted Horses book. According to the book jacket, “Horse Mania 2010 galloped into Lexington, Kentucky, bringing 82 painted horses to the cities streets and 57 painted foals and horses to its public libraries”. To see photos of the painted horses, go to their website.

Be sure to put this fascinating tour on your bucket list! 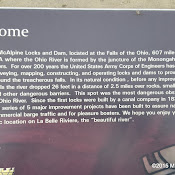 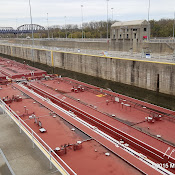 If you have been following our blog, you know we love hanging out at locks. Outside of Louisville, we had an opportunity to visit the McAlpine Locks located at the Falls of the Ohio, 607 miles below Pittsburgh, PA.

According to their website, “the canal was completed and the first boat passed through December 22, 1830. As originally constructed, the canal was 1.9 miles long, 64 feet wide, and had at its lower end a 3-flight 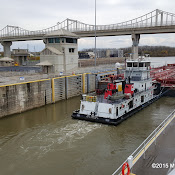 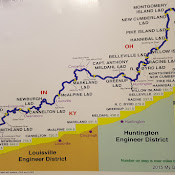 nal had a depth of 3 feet at low water stage.”

By 1852 only 57% of the craft could pass through the locks so the Army Corps of Engineers began to expand and make improvements. 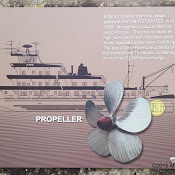 the present dam was constructed.

By April of 2009, the locks had been upgraded with twin 1200 x 100′ foot locks and the existing swing and bascule bridges were replaced by construction of a two-lane, high fixed span concrete bridge to provide access to Shippingport Island and the Louisville Gas and Electric hydroelectric generating station. Great displays about the history and stats about the lock but it was a lot 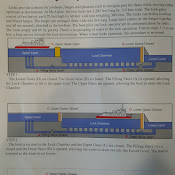 And, of course, we tried a few restaurants during our stay in the Lexington area. Here are the highlights: 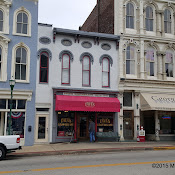 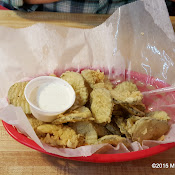 After touring Toyota, we headed into Georgetown for lunch where we decided to try this cute little restaurant based on the good reviews it had. Cute place with a fairly extensive menu. In the reviews, everyone raved about their Frickles (fried pickles $3.99) so we had to try a small order of those. I decided to continue my plunge into the world of disgusting fried foods so I ordered their luncheon special – a Combo 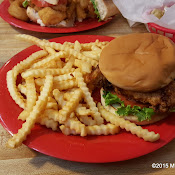 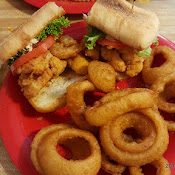 Lexington Diner, Lexington
From the outside it didn’t look like much but what a great find this place was! Located near downtown Lexington, this relatively new, small restaurant is definitely not your typical diner. We met the owner, Ranalda, who told 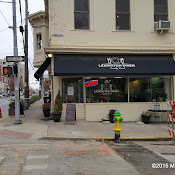 us that since the opening it had been visited by several celebrity chefs including Alton Brown and that Bobby Flay was interested in opening a restaurant nearby. She’s a TV celeb as well having appeared on several Food Network shows. 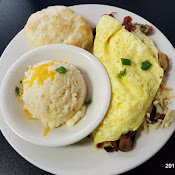 I ordered the Smoked Gouda Omelette filled with scallions, applewood bacon, smoked gouda and mushrooms ($8.99) and Rob had the Hot Brown which is turkey, tomato, applewood bacon topped with mornay sauce. We both had the cheddar cheese grits. Everything was delicious! Definitely will go back here if we are ever in the area again. 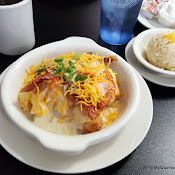 Red State BBQ, Lexington, KY
One day while staying at the Lexington Horse Park after an exhausting day of distillery tours, we did take out from Red State BBQ. 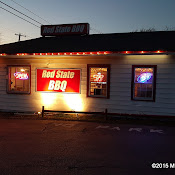 Although it is located just a few miles from the campground, it was dark when we went there so we almost drove past it. Based on the reviews, we knew that it was associated with a motel and that it didn’t look like much from the outside. That’s for sure, especially the motel! 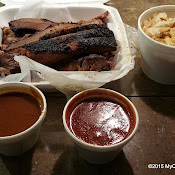 We ordered beef brisket and potato salad. We had a choice of sauces so we ordered Kentucky Small Batch (of course it had bourbon in it) and Texas Spicy. Very good! 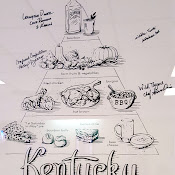 We made an attempt to try everything on the Kentucky Food Pyramid but as hard as we tried we didn’t quite make it. No burgoo (a spicy stew, similar to Irish or Mulligan stew, often served with cornbread or corn muffins), no Benedictine (tea sandwiches made with cucumbers and cream cheese) and no 1st Saturday in May pie (aka Derby Pie – chocolate and walnut tart in a pie shell with a pastry dough crust, usually served at the Kentucky Derby) for us. Guess we’ll have to return to Kentucky to expand our culinary horizons!

We so enjoyed our stay in Kentucky and would have gladly extended it to do some more sightseeing, but the chilling temps convinced us that it was finally time to begin our journey south to Riverbend. Stay tuned!