Visiting a National Park has always been ranked at the top of our priority list of places to see and things to do.  We’ve been to a number of them over the years, some before we became RV’ers and some since. Acadia National Park (ME), Everglades (FL), Yosemite (CA), Sequoia (CA), Yellowstone (WY), Zion (UT), Bryce Canyon (UT), Glacier (MT), Rocky Mountain (CO), Petrified Forest (AZ), Saguaro (AZ) both East & West, Grand Canyon (AZ), Hot Springs (AR), and Smoky Mountains (TN) to name a few.

With a planned return visit to Willow Beach Campground & Marina in AZ, extending our trip another 200 miles further west would allow us to cross another one of the 62 National Parks off our bucket list, Death Valley National Park.

As we left Pahrump, NV for Death Valley, we were so excited! It would be an approximate 1-1/4 hour, 70 mile, very scenic drive as we travelled on NV-160W to West Bell Vista Road to CA-190W. 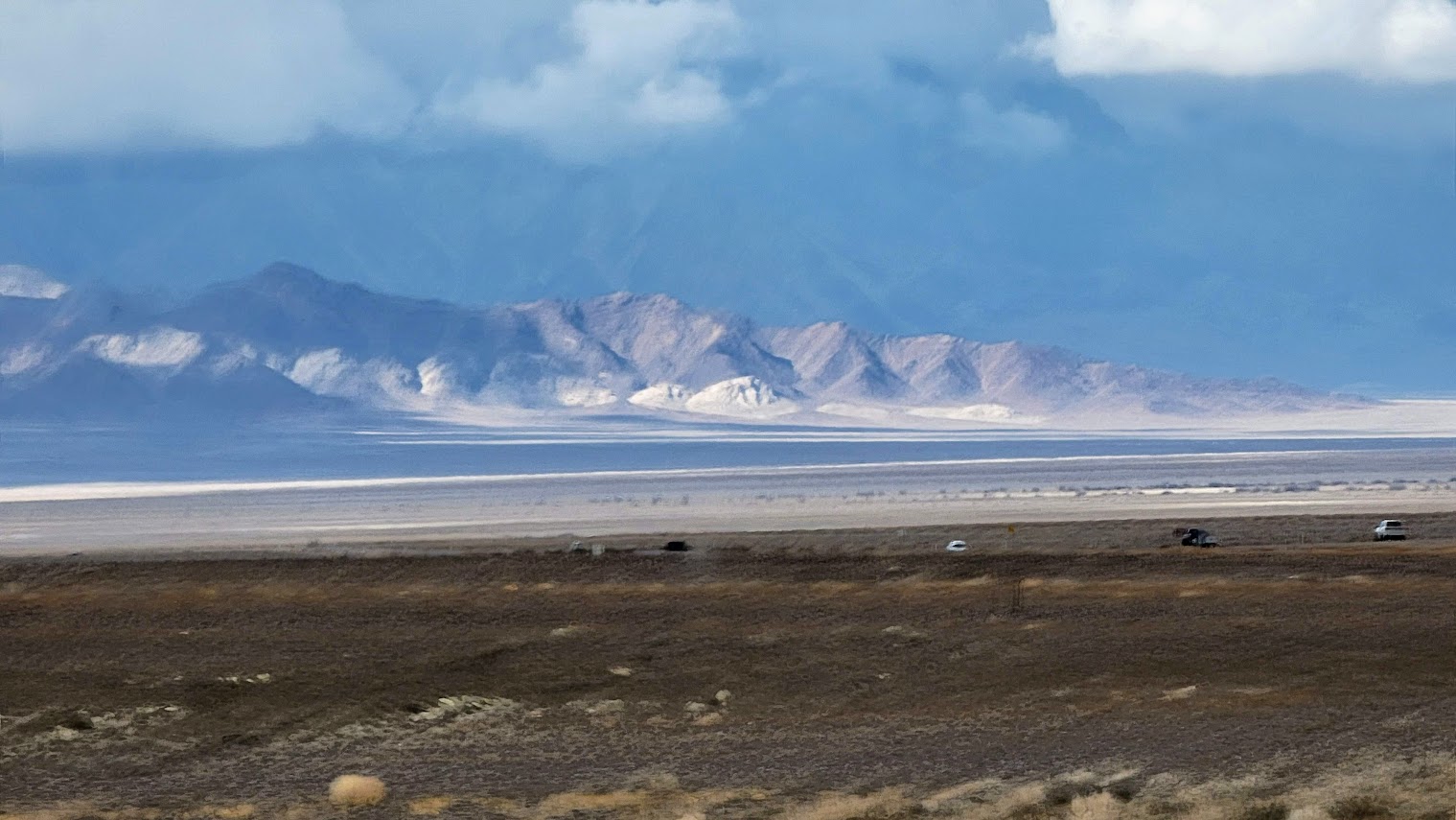 At the border of Nevada and California, we would turn onto CA-190W at Death Valley Junction. As we arrived there, we wondered is this a ghost town? Nothing around, an empty building on one corner, perhaps what used to be a gas station, no stores, no restaurants, no post office, nothing, just sand and desert scrub, except across the street, a big white stucco horseshoe shaped building. A sign on the side of the building identified it as the Amargosa Opera House. What? An Opera House in the middle of nowhere? That’s strange! 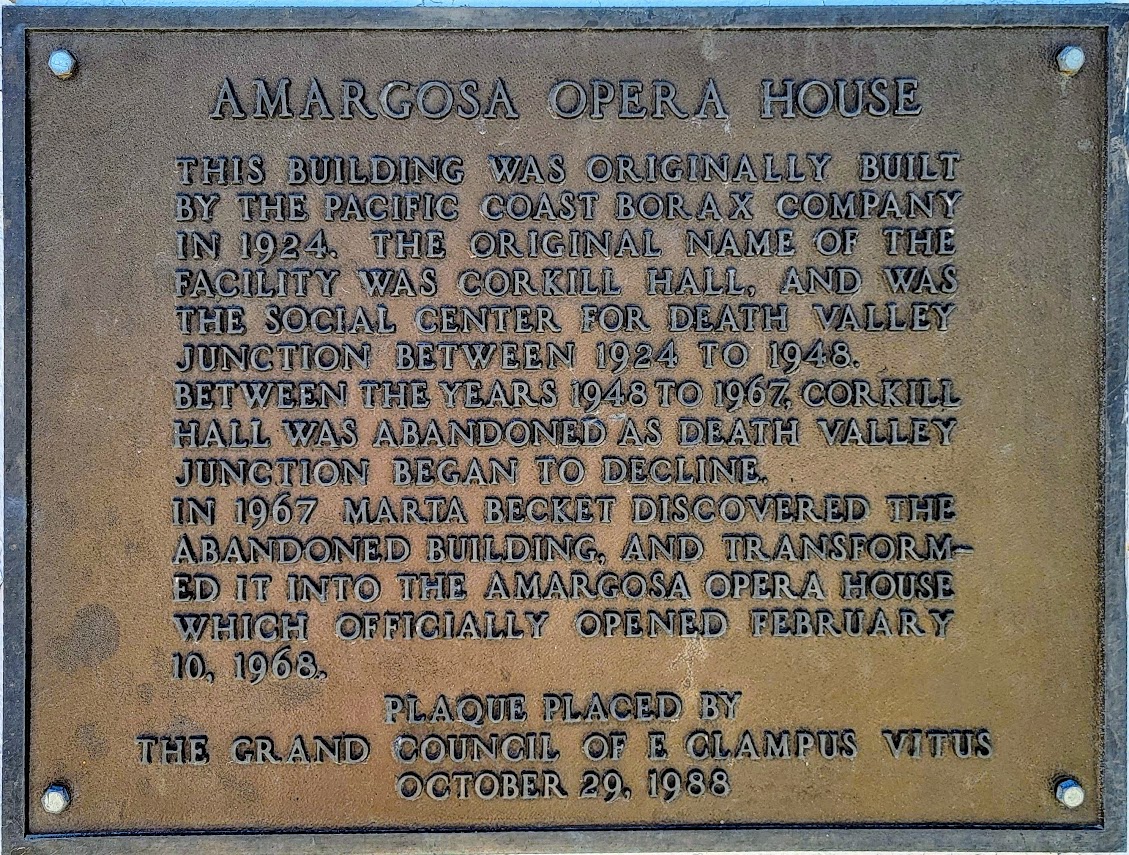 Death Valley Junction also known as Amargosa (Spanish for “bitter”) has a fascinating history (scroll down when you click on the link) from being a flourishing borax mining town in the early 1900’s to a town of disrepair when the borax ran out in 1928 to becoming a popular hotel and theater after Marta Becket (check out this video), a New York City ballerina, acquired the property in the 1960’s. In addition to considerable refurbishments she made to the property with only $500, she painted murals inside the theater on its walls, not of typical landscapes, but of a Renaissance courtly audience. So even if a live audience was not present, this fantasy assemblage could be forever viewing her as she performed. Although Marta died in 2017, her legacy for dancing as well as her artistic creativity has continued to live on at the Opera House. 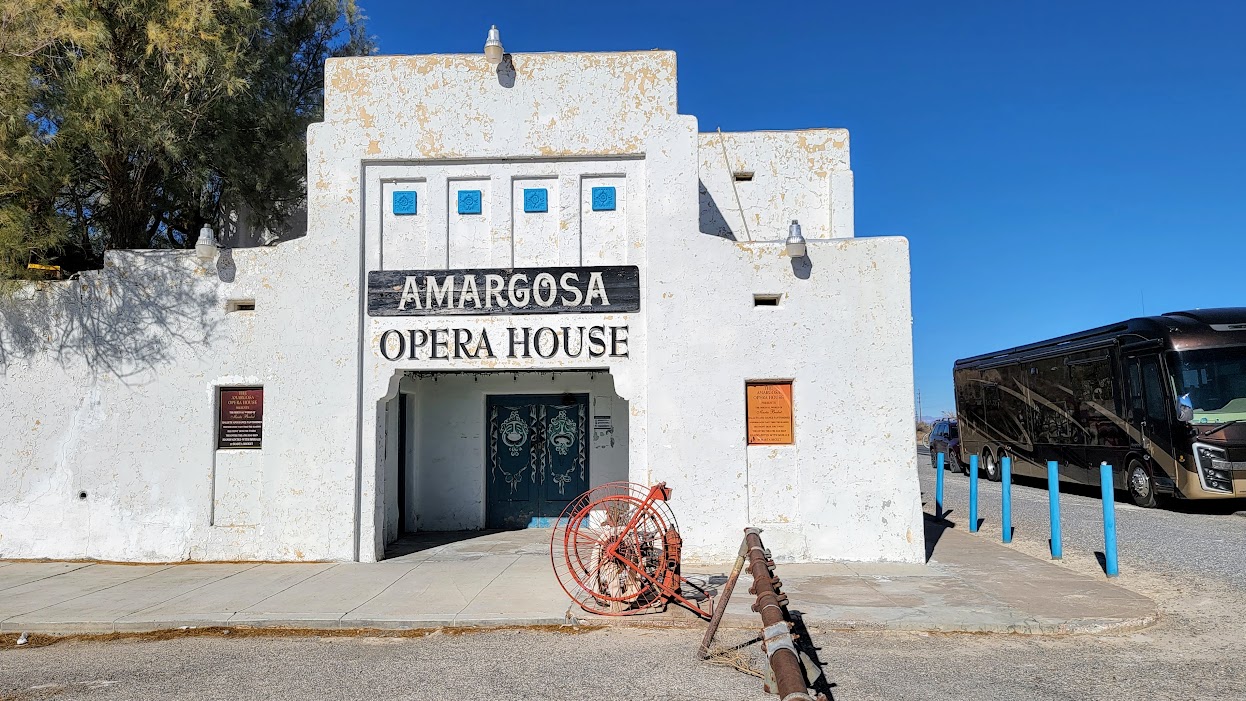 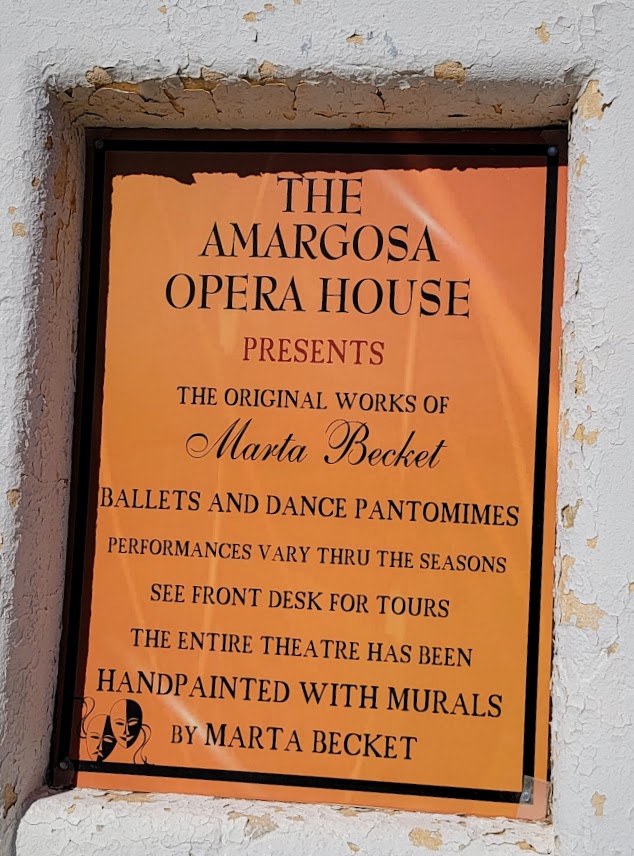 Although we did not take the tour during our nine day stay, we heard from others staying at our campground that it was a very interesting tour and that the inside of the theater was beautiful. 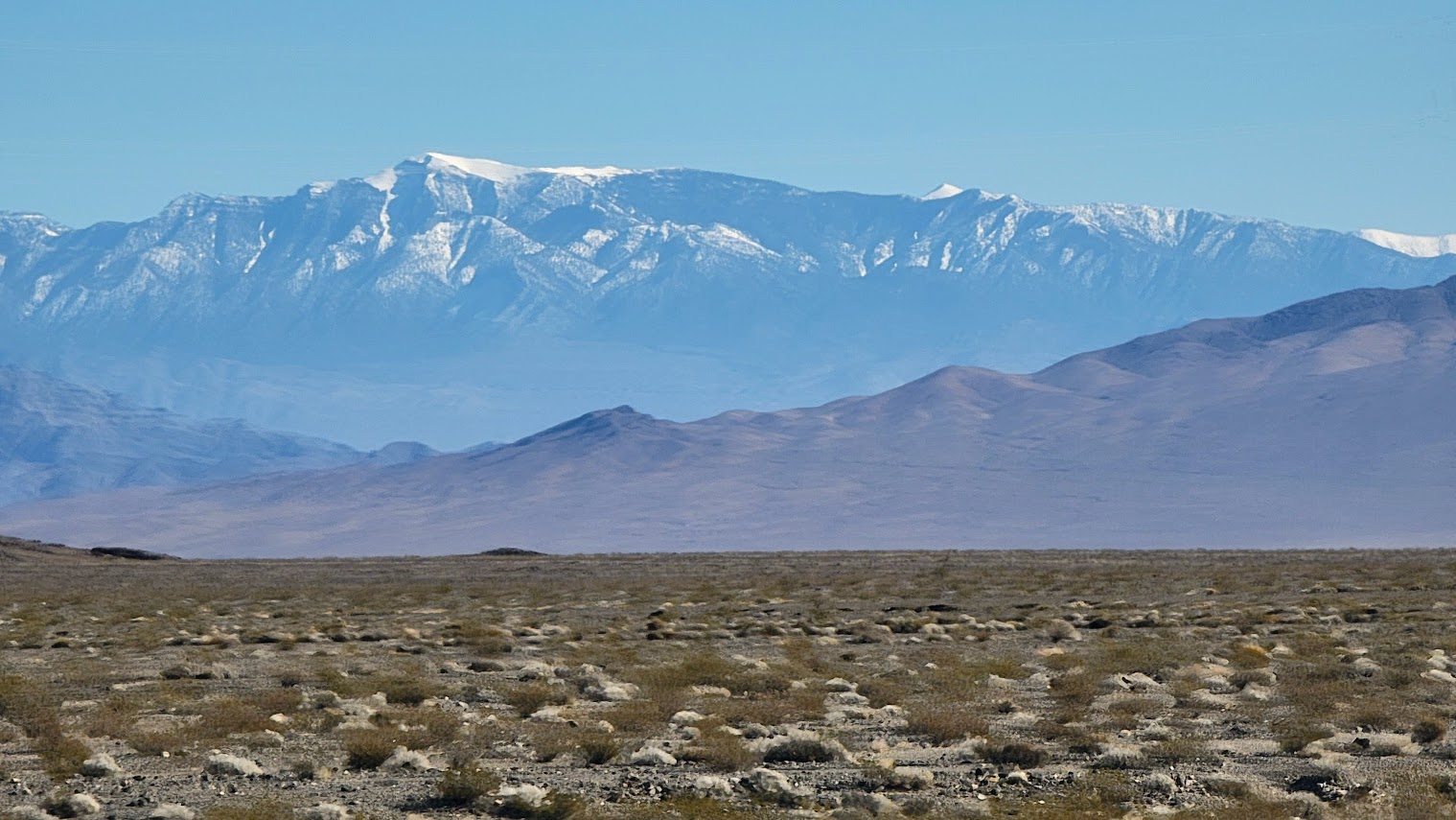 At this point we were only about 30 minutes from the park. The desert landscape started to change dramatically. 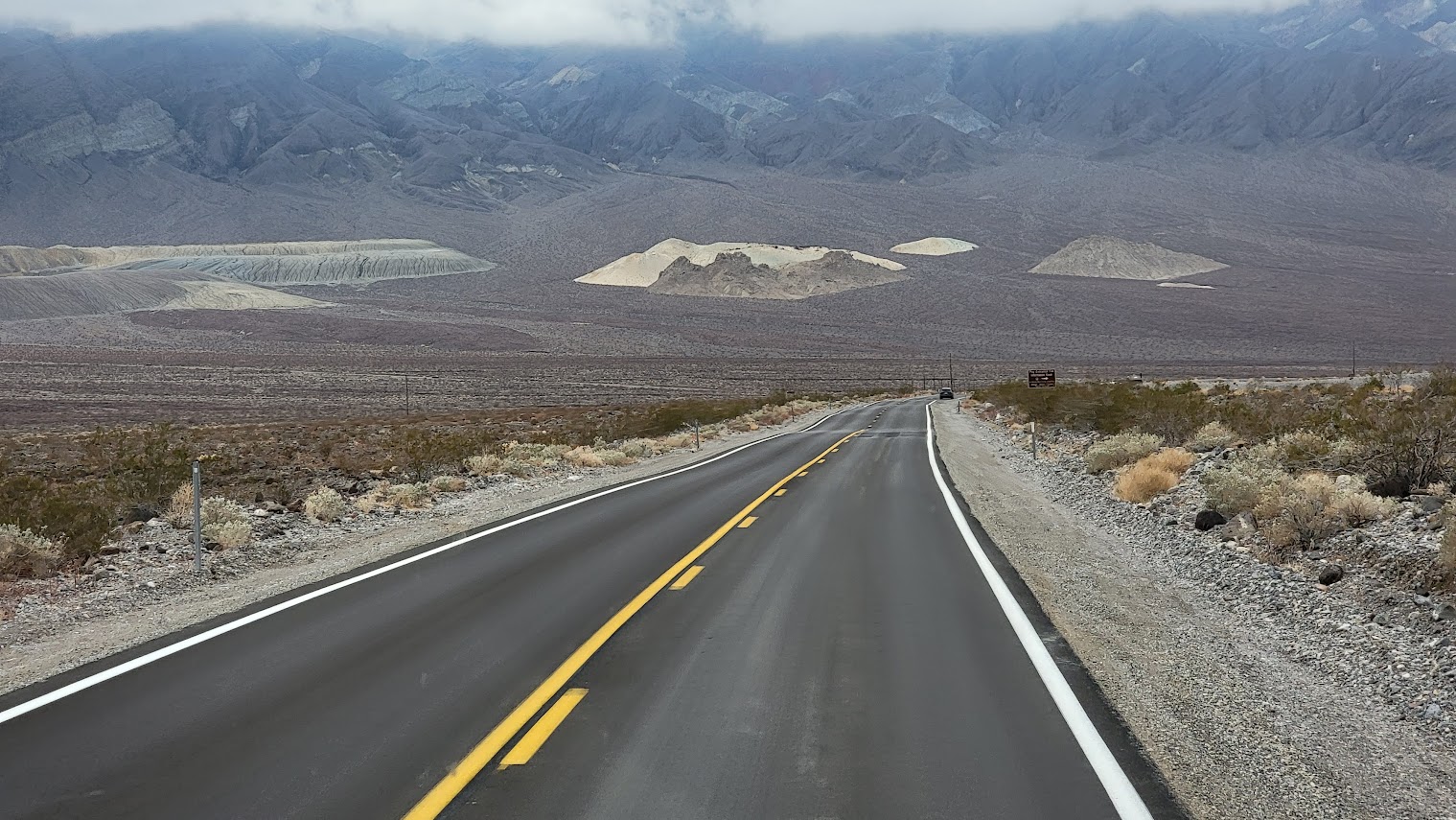 As a kid (oh dear, I’m probably dating myself here), I remember TV shows like Wagon Train and Death Valley Days so based on those shows my recollection (obviously an incorrect one) was that Death Valley was a massive desert covered with sand dunes, desert shrubs and cactus. A land that sounds forbidding and gloomy. Little did we realize that this land of extremes in a valley nestled between two mountain ranges, the Black Mountains and the Panamint Range, has not only a lot more phenomenal scenery to offer than just sand, dunes and the typical desert vegetation, but also a fascinating history and culture as well. And actually there are dunes but only in a relatively small area of the park.

So many groups of people, from the Timbisha Shoshone who lived here centuries ago, to the Forty Niners seeking their fortune in gold, to the Chinese borax mine workers at the Harmony Borax Works in the 1800’s, to Japanese American Internees being moved here after a fight at Manzanar War Internment Camp during WWII, have contributed to the rich ethnic history of the area. Difficult to imagine how they survived under such harsh conditions.

And visiting here you can’t escape learning the fascinating stories of the Lost 49’ers, the symbolic Twenty Mule Teams pulling massive wagons of borax, a grueling 165 mile trip, to the railroads near Mojave and the Civilian Conservation Corps who built the roads, campgrounds, ranger stations and facilities in 1933. So much history to ponder! 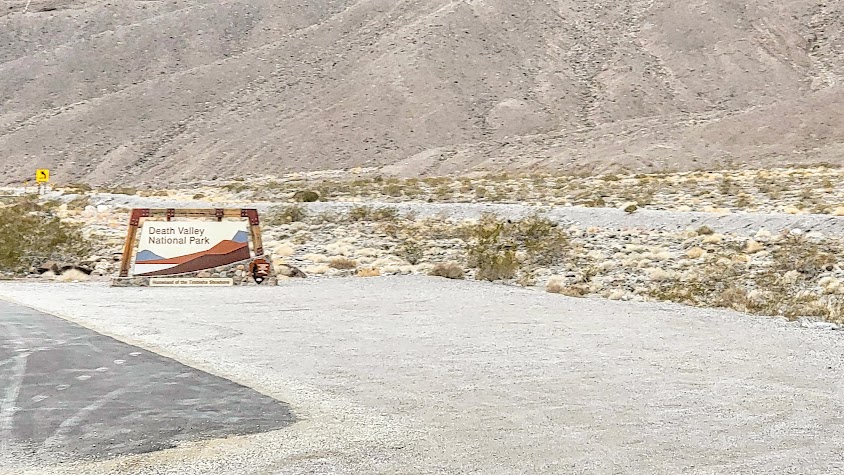 Death Valley was designated a national monument in 1933 and made a national park in 1994.  Note: if the map below is too difficult to read, click here for a larger, expanded map.

With over 3 million acres, covering 5,270 square miles (RI is only 1214 sq mi), it is the largest National Park in the contiguous United States. It is the home of Badwater Basin, the second-lowest point in the Western Hemisphere (behind Laguna del Carbón in Argentina) and lowest in North America at 282 feet below sea level. Telescope Peak in the Panamint Mountain range at 11,043′ is the highest point in the park.

And speaking of extremes, we all know about the extreme temperatures – Death Valley holds the record as the hottest place on earth. The world record highest air temperature of 134°F was recorded at Furnace Creek on July 10, 1913. Summer temperatures often top 120°F in the shade with overnight lows dipping into the chilly (not) 90s°F.  Hard to believe that anything can survive here but many, such as the bighorn sheep and kangaroo rat, have adapted to the harsh, arid climate. No worries for us, however, during our January stay, temps in the high 50’s/low 60’s during the day and high 30’s/low 40’s at night. No complaints from us!

Average rainfall is less than 2 inches, a fraction of what most deserts receive. Note: on August 5, 2022 a thousand-year rainfall event dropped 75 percent of the local average annual rainfall, which is just under 2 inches causing flash flooding and extensive damage to roads, hotels, the visitor center and other facilities. NV-290W the main road through the park remains closed due to the debris and severe damage to asphalt. Hopefully, the roads and buildings will be repaired so the park can reopen in the near future. One of the few campgrounds in the National Park that offers full hookup sites that are reservable is Furnace Creek Campground. Be aware that making reservations at this very popular campground can be a little challenging, taking a lot of advance planning. A post offering a few helpful tips will be forthcoming. 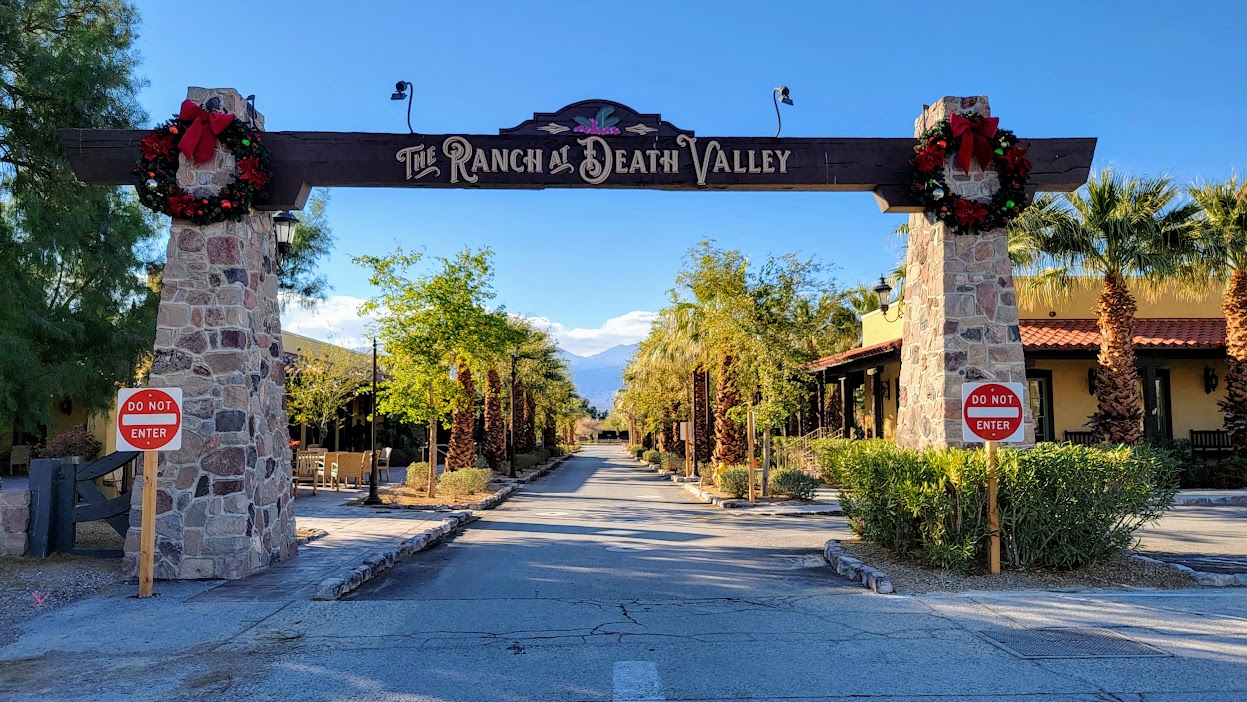 Further away are the Stovepipe Wells Village and the private Panamint Springs Resort but we didn’t visit either of these so we can’t comment on either of those hotels.

Gasp! Look at the at the gas prices at the Furnace Creek Fuel and Auto Services station in the first photo below, taken on December 31, 2021. Remember this is well before the Ukraine War and the rise in prices across the rest of the US. 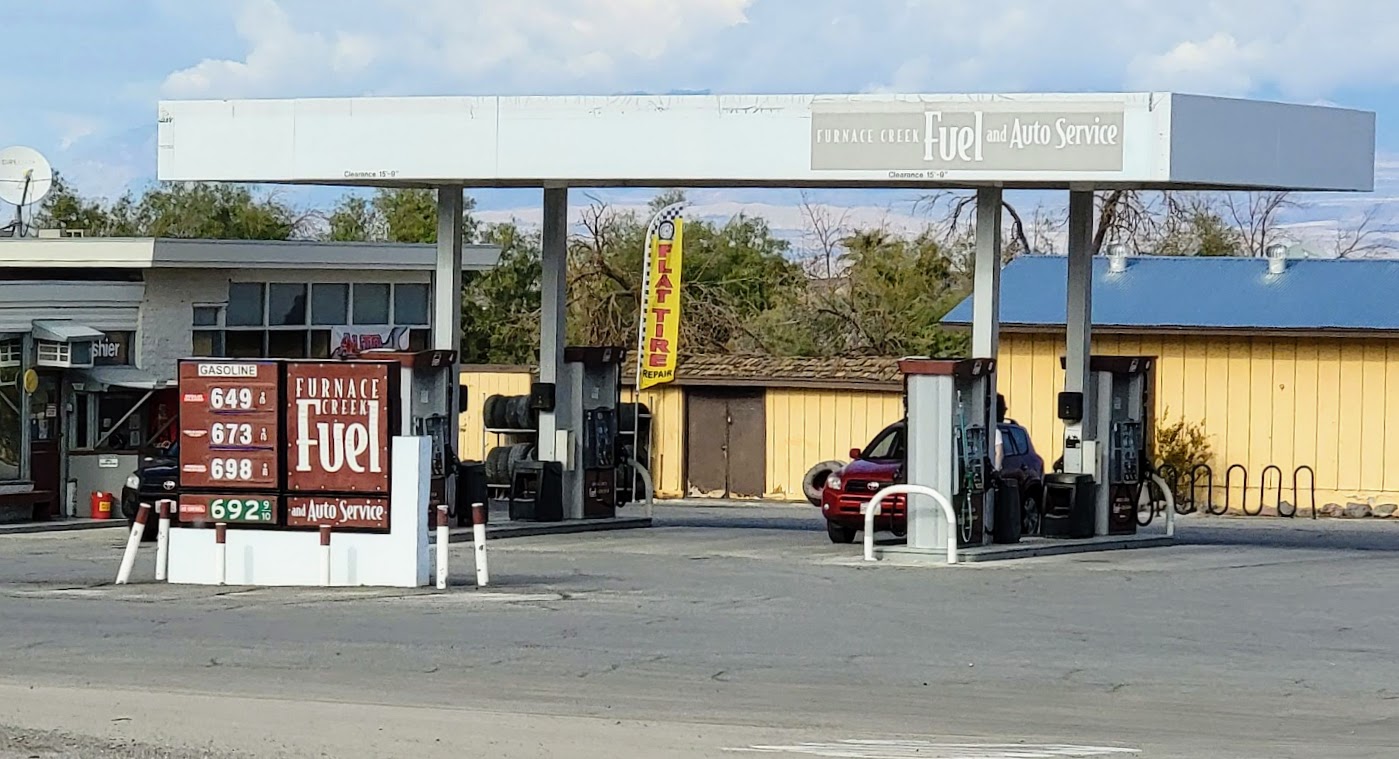 These were the prices on January 4, 2021. Ouch! Needless to say, we weren’t eager to fill up here in Furnace Creek! It was worth taking a scenic 50 minute drive across the border to Beatty, NV in the Jeep where the gas was much cheaper ($3.82). Lots of sightseeing along the way! In the coach we filled up in Pahrump, NV and didn’t need to buy diesel here. 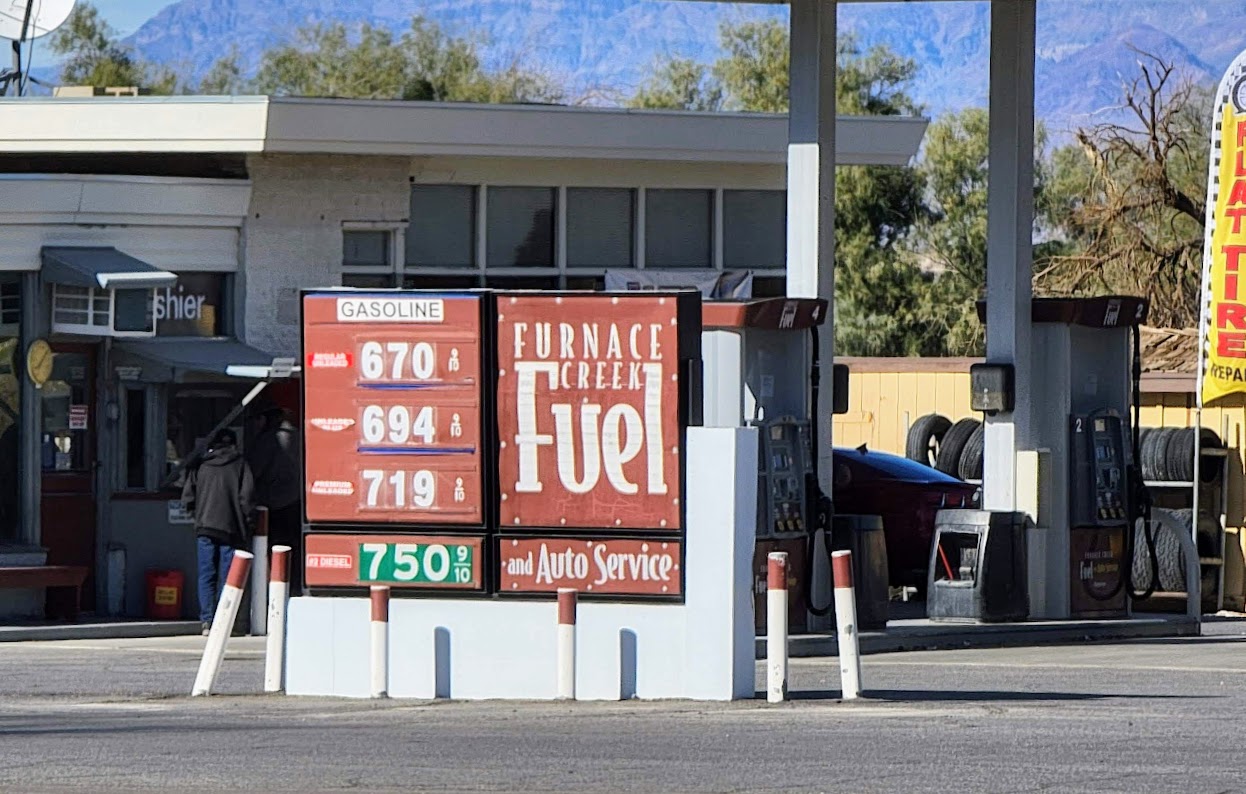 Sounds silly to say it, but that’s not bad compared to the prices shown in this Newsweek article dated March 29, 2022, the prices were: $8.75 for regular unleaded; $8.99 for unleaded plus; $9.23 for premium. Yikes!  Hopefully with gas prices across the U.S. on the downswing, the prices there will eventually come down once the park is open again.

When we arrived at the entrance station to the Furnace Creek Campground, no one was there to check us in. According to a note in the window, the rangers were at lunch so we should proceed to our site, then return after 1:15 p.m. to check in later.  Site #68 was a 99′ long pull thru with plenty of room to park both the coach and the toad. 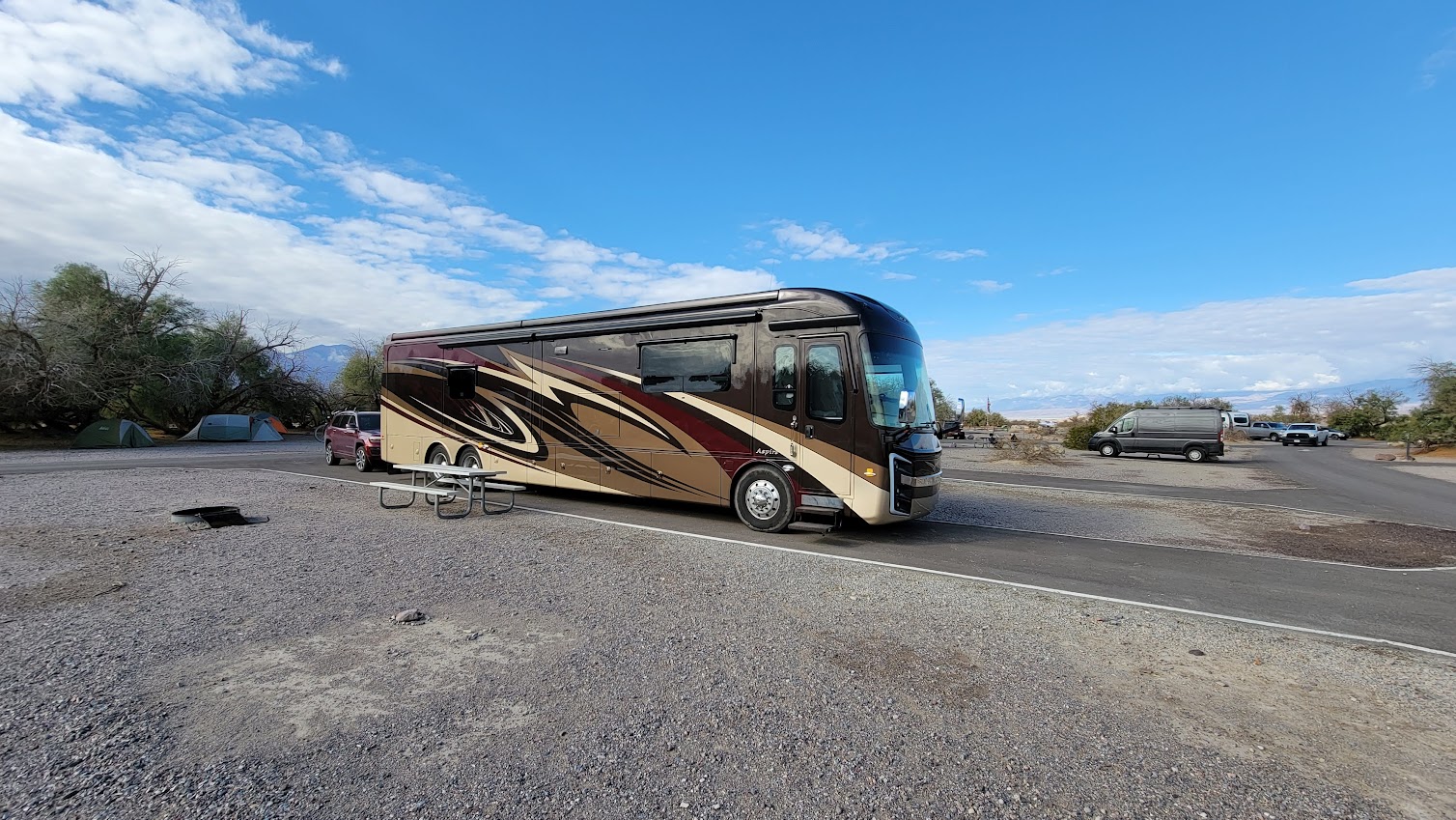 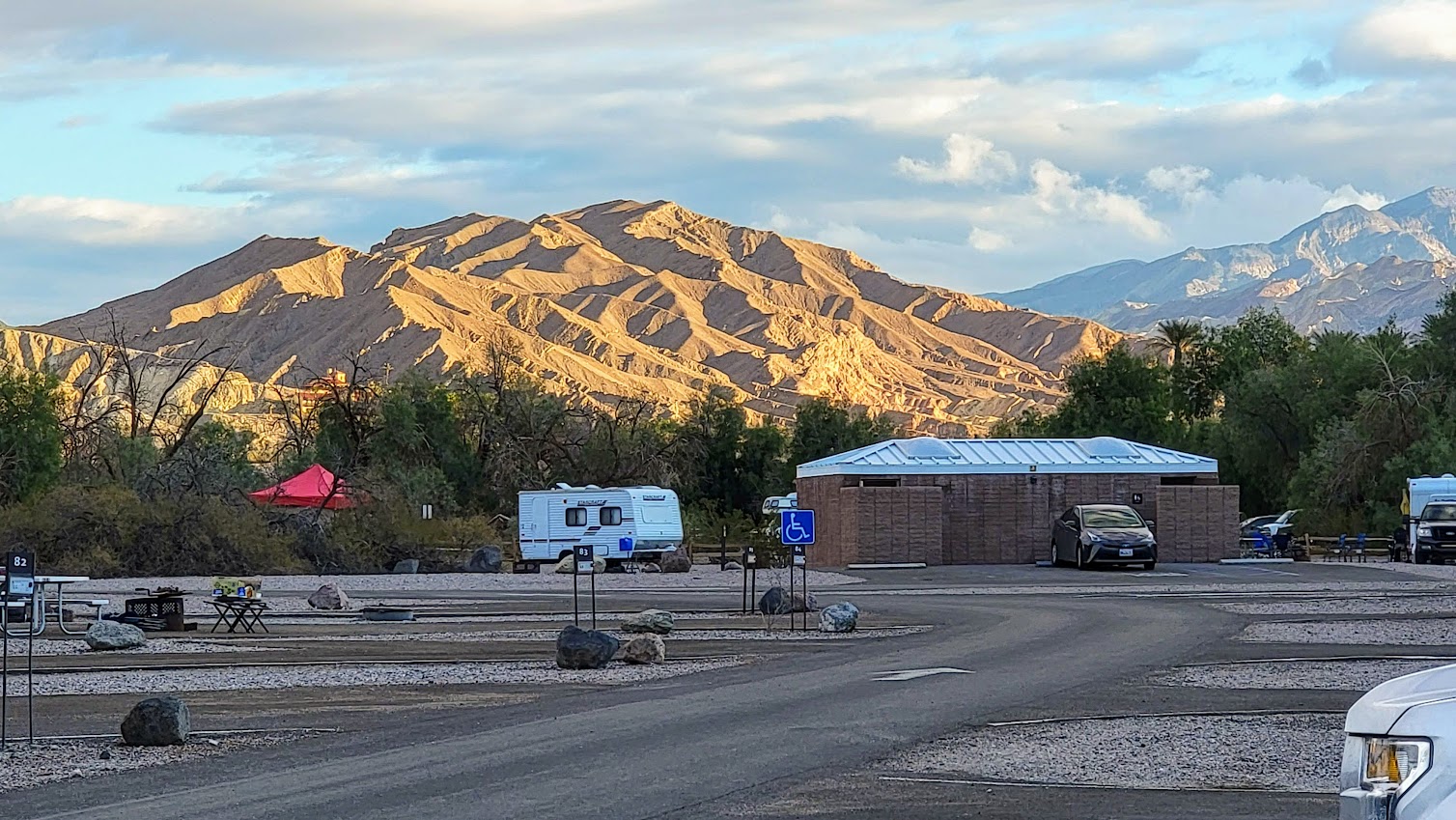 Good thing because they were very strict about all wheels being on the pavement, a camp host would ride around on his bike looking for violations and scolding the offenders. No worries that there weren’t a lot of amenities here, just a sandy parking lot with paved sites, a picnic table and a fire ring. That didn’t really matter, the spectacular view of the mountains and the star studded night sky (it is a certified International Dark Sky location) made up for the lack of amenities! One thing to be aware of is Furnace creek has only 18 full hookup sites and the rest are no hookup sites (boondocking sites) – that means your neighbors are likely to be running generators. Most had nice quiet generators like the Honda’s, but a few had the obnoxious cheapo kind that were really loud. 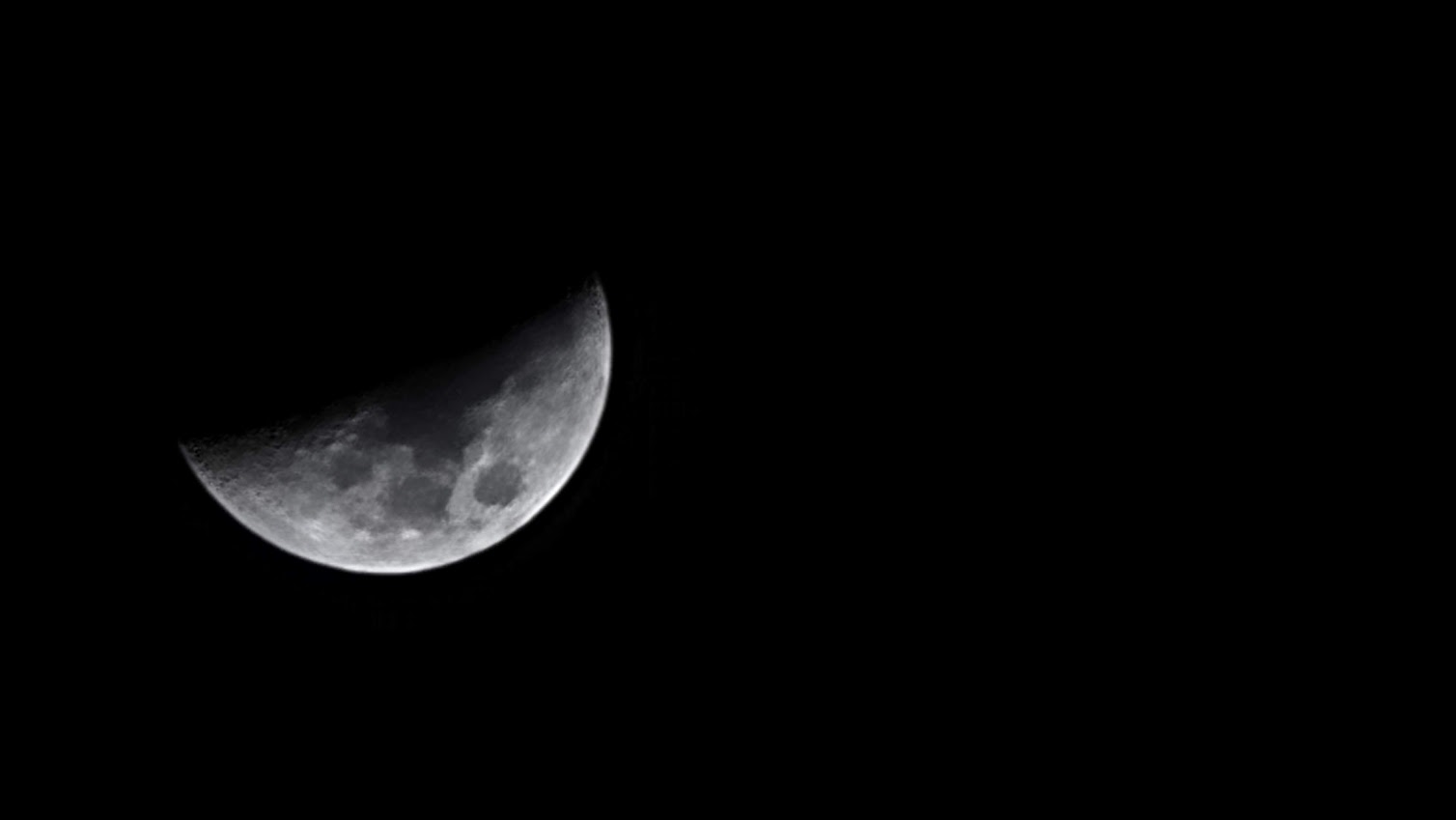 Note there is very limited cell service here and therefore limited internet access via cell and even though you might get a connection, it is so overloaded that it is all but unusable. However, we did discover during one sleepless night that the internet was useable late at night or in the wee hours of the morning when no one else was using it. Also, we were lucky that an employee at the Ranch check in desk (we stopped to ask a question) gave us her own personal login info for the Wi-Fi so we had a bit better access than most, but only while near the Ranch and Inn, the Wi-Fi didn’t work at the campground.

To acquaint ourselves with everything that Death Valley had to offer, on our first day, we visited the Furnace Creek Visitor Center which is a short walk from the campground. A short 20 minute film and numerous displays familiarized us with the valley’s geology, history, plants, and animals. Note park fees can be paid and national park passes can be purchased here. Our Federal Senior pass as usual provided us free access. 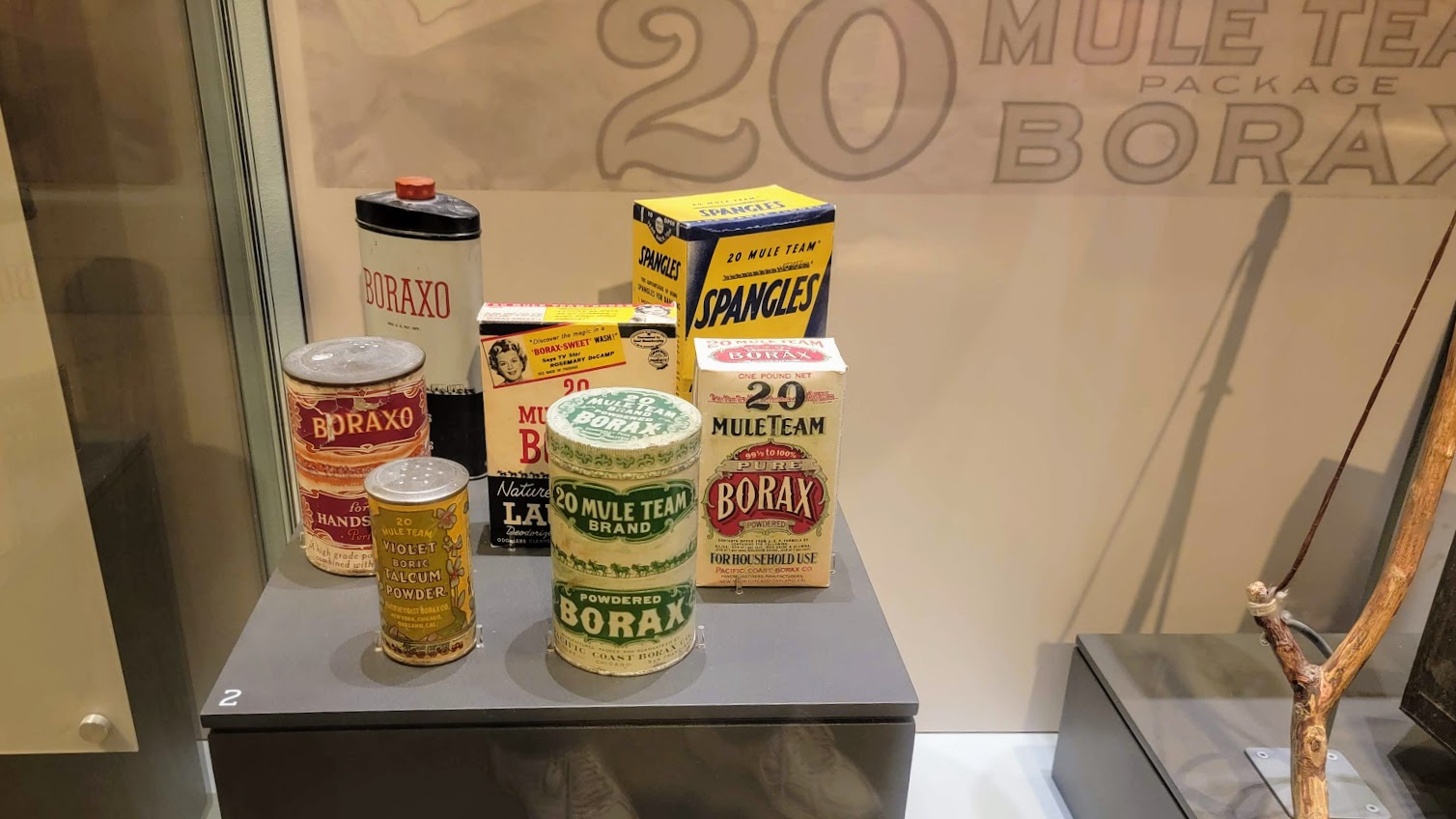 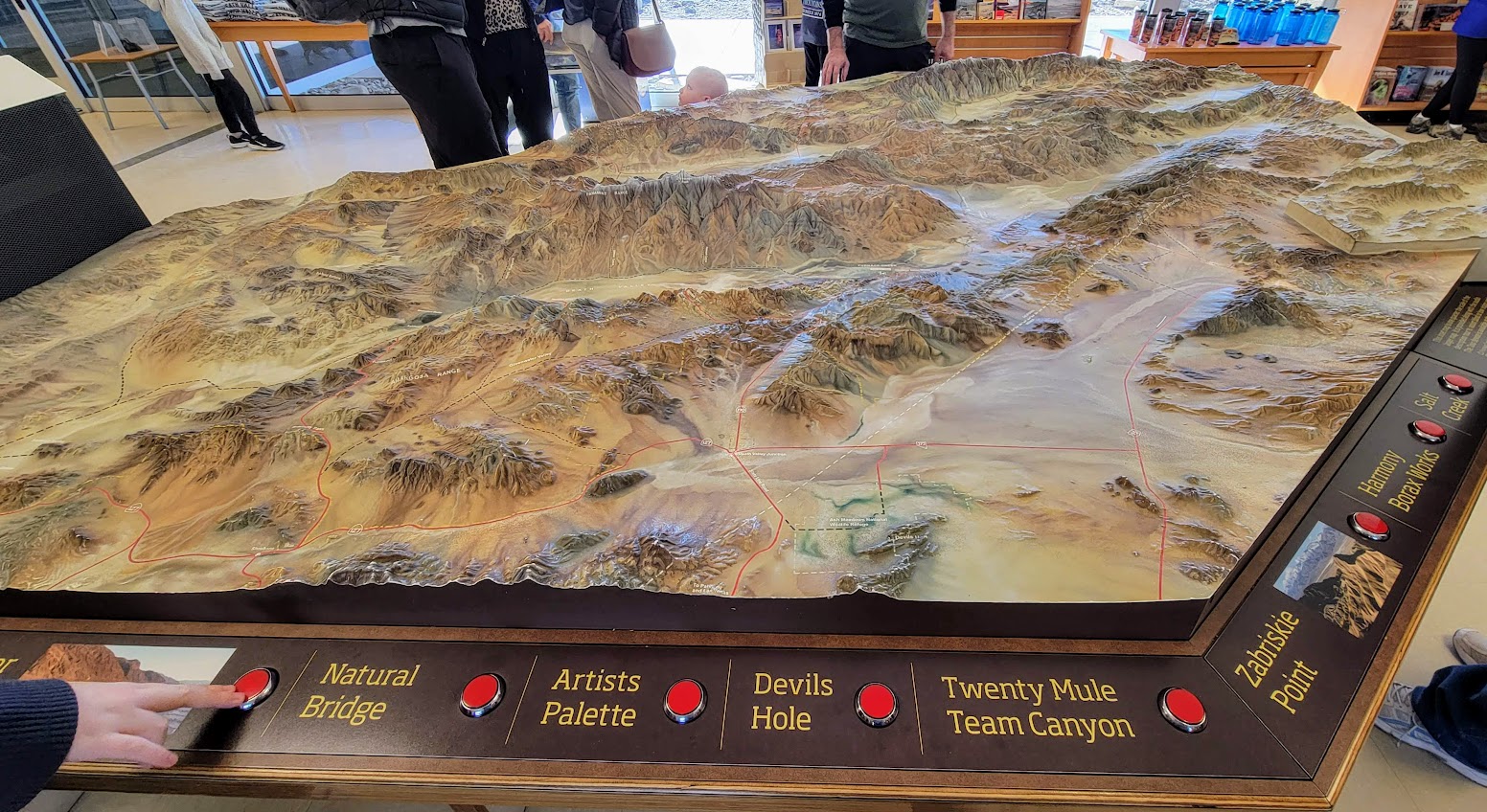 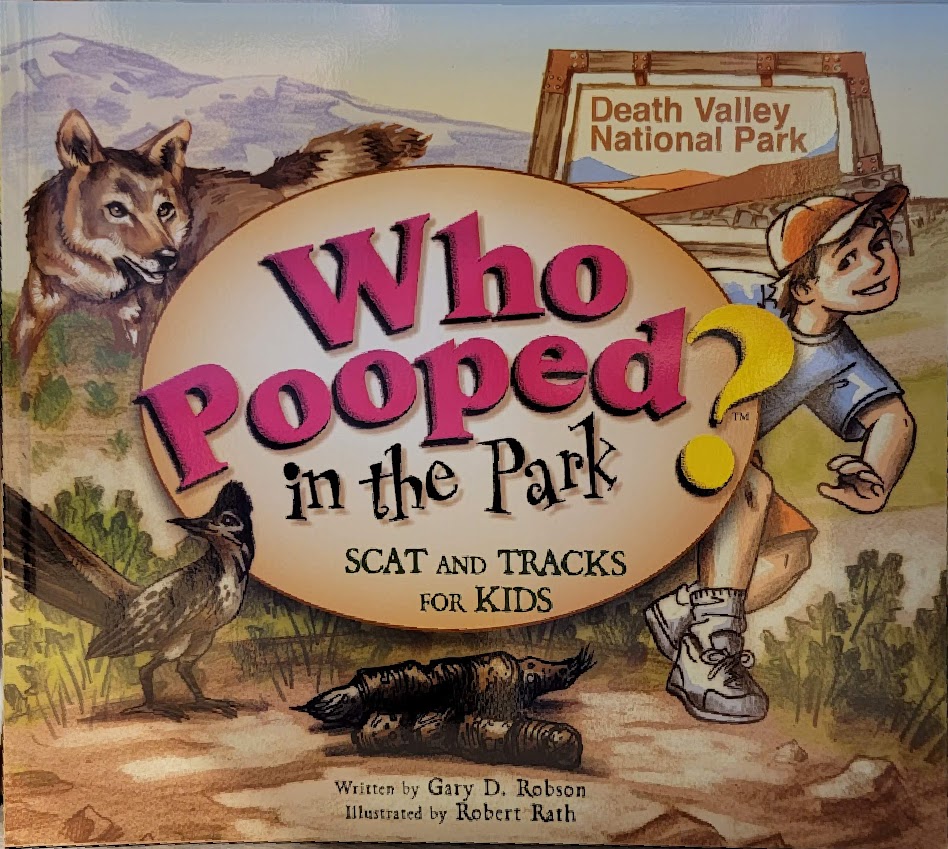 Being the winter months, as mentioned above, the outside thermometer thankfully wasn’t displaying any record breaking, scorching 100+º temperatures. Just a mere rather boring and mundane 60º on January 1, 2022! Perfect! 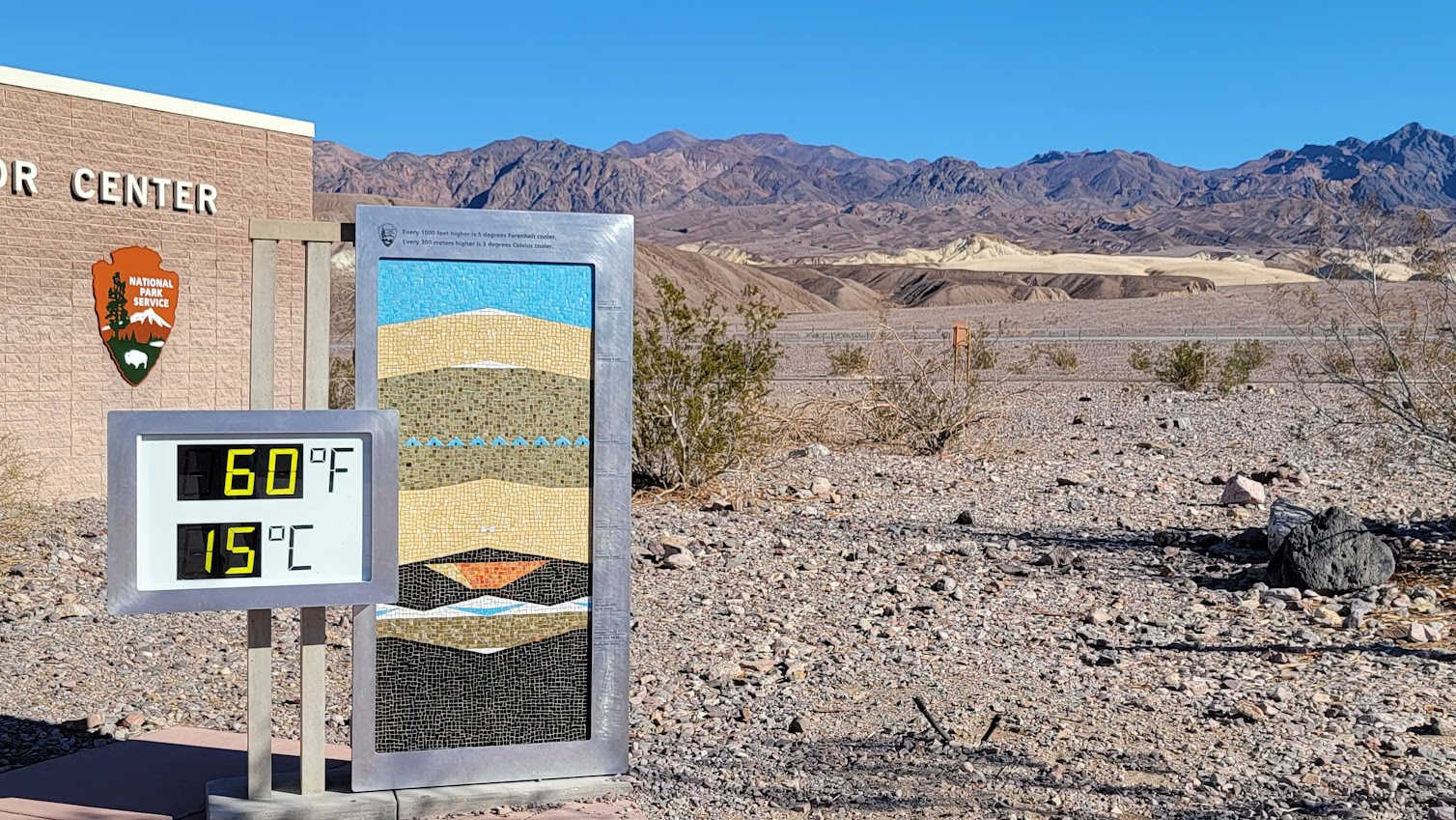 Because of the size of the park and all that there was to see and do, it was a very busy nine day stay! And even with nine days, we didn’t even come close to seeing everything. Some places such as Scotty’s Castle were closed due to 2015 floods and others such as Ubehebe Crater and the Wildrose Charcoal Ovens were well over an hours drive from Furnace Creek. We also didn’t visit The Racetrack because of numerous warnings about the risk of sharp rocks causing flat tires and no cell service there.

But we did see a lot of the other attractions! Since there are far too many to cover in this post, stay tuned – there’s definitely more to come!

We came upon this site not too far from Furnace Creek. This is NOT an attraction anybody wants to see! Somebody had a bad day! Hope nobody was hurt. 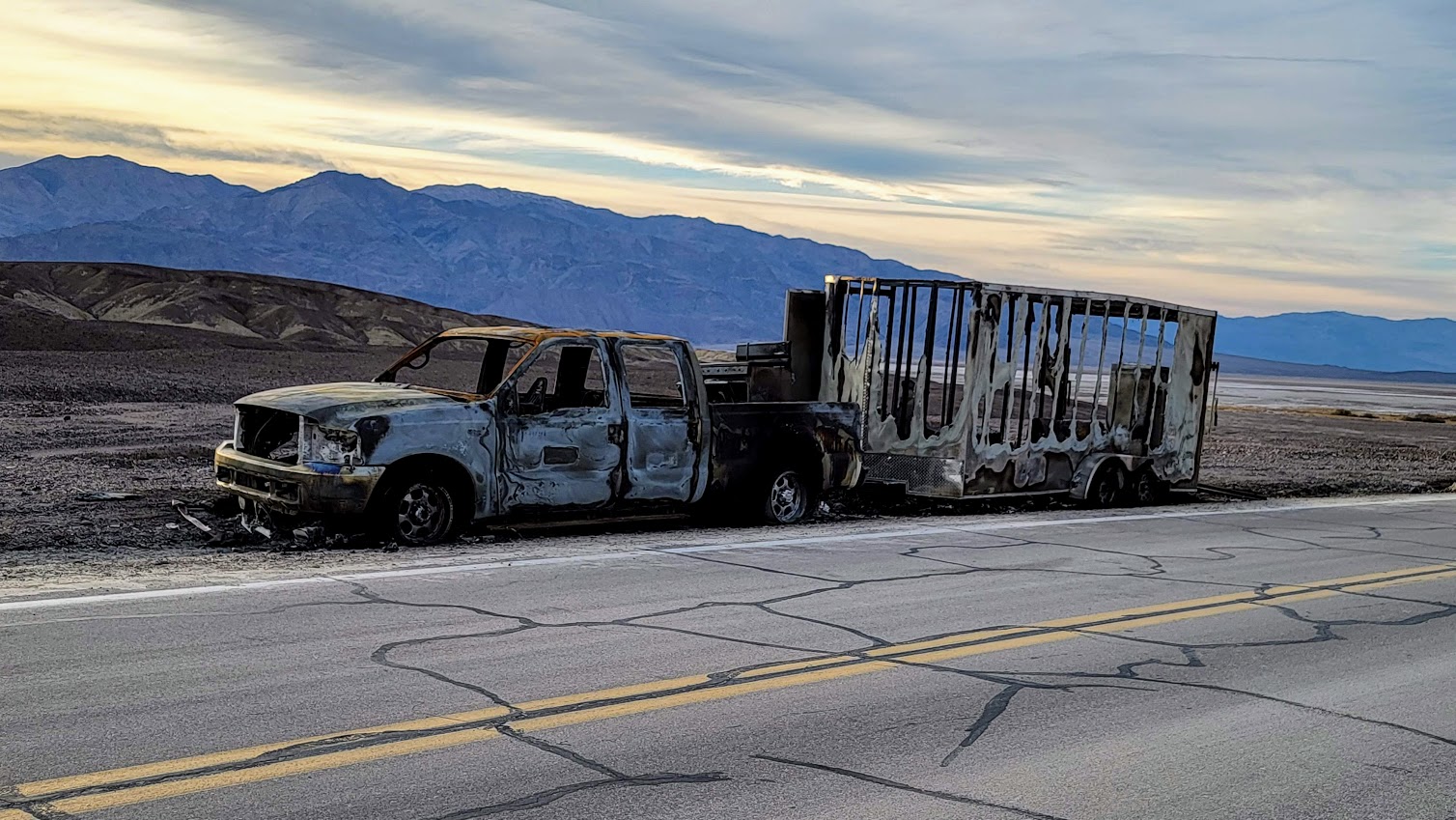