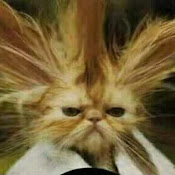 Ah, the joys of spring and summer!  The smell of freshly mowed grass, brightly colored flowers in bloom, the melodious tunes sung by our feathered friends and clear, cloudless bright blue skies……nothing can beat it!

All it took was one day of weeding along the edge of our driveway and within two or three days, my right arm broke out with the creeping crud.  Every year no matter how careful I am, I 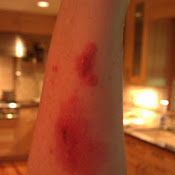 end up with a major case of it. Since I didn’t see any evidence of it near the area I was weeding, I’m not sure how I picked it up.  Was it on the gardening glove that I used last year and never washed?  Did one of the cats meander into some of it and picked it up on their fur? Was it somewhere along the edge and I just didn’t see it?

Interesting that when I was a kid, my older brother used to get a terrible case of poison ivy every year.  It was so bad that he was such an oozy, disgusting (sorry bro’) mess that the doctor and my Mom had to swathe various parts of his body with gauze. Since he was so highly allergic, he quickly became a prime candidate for the poison ivy vaccine which he would get each year.

Now, I, on the other hand, could walk through it and I would stay blemish free.  That is until I reached my early 40’s when it suddenly hit me with a vengeance!  If only I had had more sympathy for my brother back when we were kids. Once I got it, I quickly found out it doesn’t just itch but it feels like your skin is burning so it is painful as well.

I remember one year when I was still working in the corporate environment for Motorola.  I had to fly out to Schaumburg, IL to meet the new VP of our organization for the first time.  When my Director first introduced me to him, my first comment was “I don’t usually look like this”.  Yes, sadly I had it on my face and looked like I had just come out of quarantine from some savage flesh eating disease!  How embarrassed I was!

And so it has happened each year since, no matter how careful I am.  This year when it first appeared, I thought that maybe I would luck out and it would stay isolated on one arm and I would not have to go to a doctor.  HA, silly me, that isn’t how this stuff works! Once it’s in your system, it merrily pops out anywhere and everywhere.  So within a few days, new spots appeared on my left arm and reluctantly I ended up going to a clinic down near the boat. The doctor prescribed the usual Prednisone pack where you take 6 pills one day, 5 the next and so forth plus a prescription for Hydroxyzine which is an antihistamine to reduce itching.  Then on top of all that he also suggested a “booster” shot (in the tush no less) that would get things going faster. Not being very good with needles, shots and blood, it took a bit to convince me that this course of action was a good thing.  It turned out that it was!

So here I am, it’s been over two weeks now and I’m still red, splotchy and itchy but it is better.  Now the bad part is that the antihistamines make me drowsy and a little cranky.  I’m not sure if it is better to be cranky from the drugs or cranky from the itching.  Maybe my darling hubby has an opinion on that although knowing him he’ll probably plea the 5th to stay out of trouble.

I was going to post this a few days ago but here it is Saturday, the 26th.  Woo hoo, today was the first day that I wasn’t itchy!  I’m still all red and splotchy but it is a softer shade of red!  So I guess I’m on the mend.

For the rest of the summer, you can rest assured that I’m just going to watch the weeds grow!