San Antonio, definitely one of our favorite cities. After visiting there in 2016, we fell in love with the city and everything it had to offer.  We quickly realized that this was one city we could visit over and over again and probably never tire of it. Read all about our exhausting adventures in our “On A Mission To San Antonio” post. Or find out our recommendations for some of the local restaurants in our “San Antonio Eatin’ “post. Or you might find our “Tips For VIsiting San Antonio” post helpful when planning your trip to this wonderful city. If it sounds like our last visit there was exhausting, believe me it was but it was oh, so much fun! 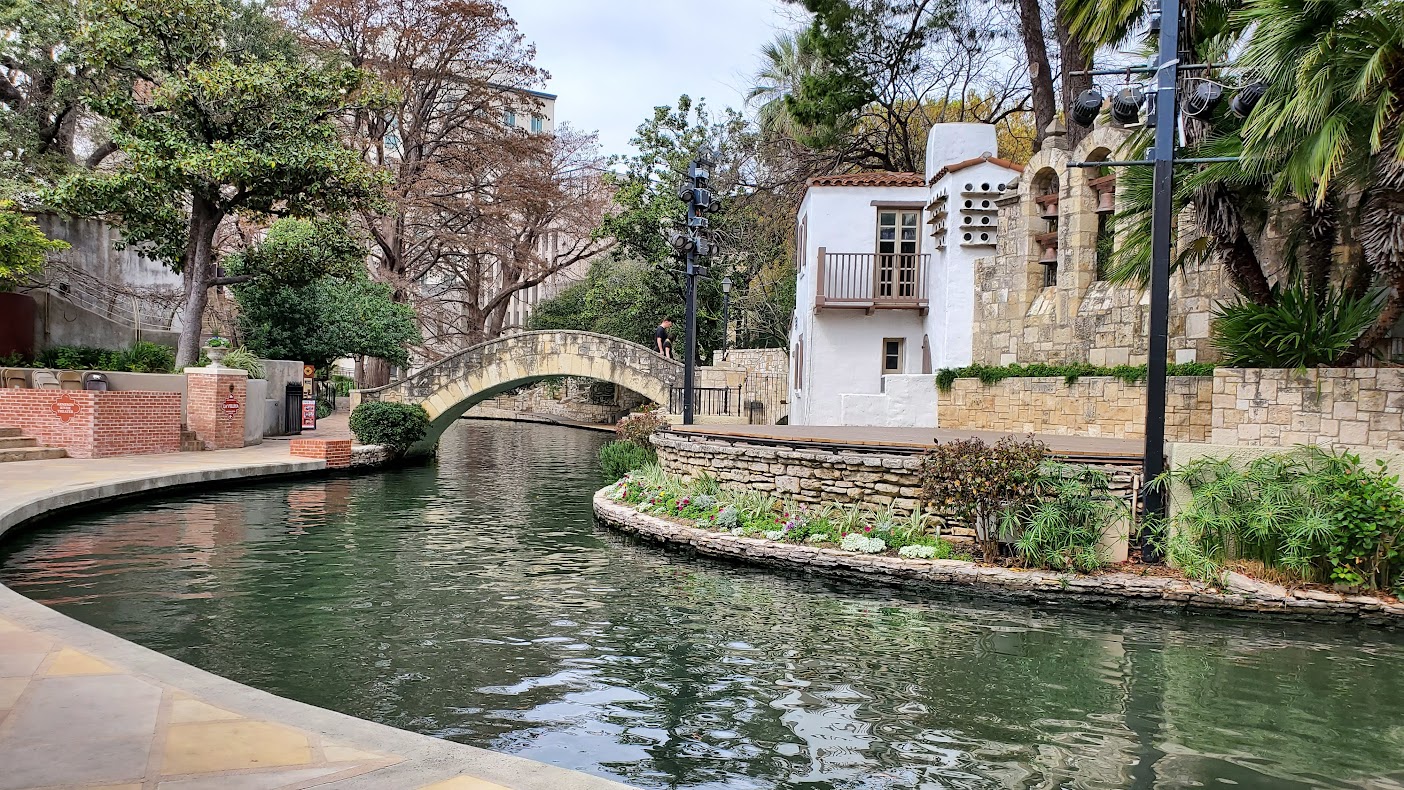 When planning our 2019-20 winter itinerary, our initial plans included a visit to Big Bend National Park followed by spending some time in New Mexico. But thanks (or should I say “no thanks”) to Spring Break which created a lack of availability at any of the nearby Big Bend campgrounds that plan was quickly nixed. Instead we decided we would spend more time in Central Texas. Yes we were disappointed but now that we are in the midst of a pandemic, hindsight tells us that not travelling so far was a good thing as it would have taken us a lot longer to return to RI.

The last time we were here, we really liked the close proximity of Traveler’s World RV Resort (see our review) to the Riverwalk and to the city, so we once again made reservations there for a week long stay. Even though it is now under the Sun RV Resort umbrella (it was a Carefree resort in 2016), not a lot had changed except that there did seem to be a lot more vacation rental cottages. 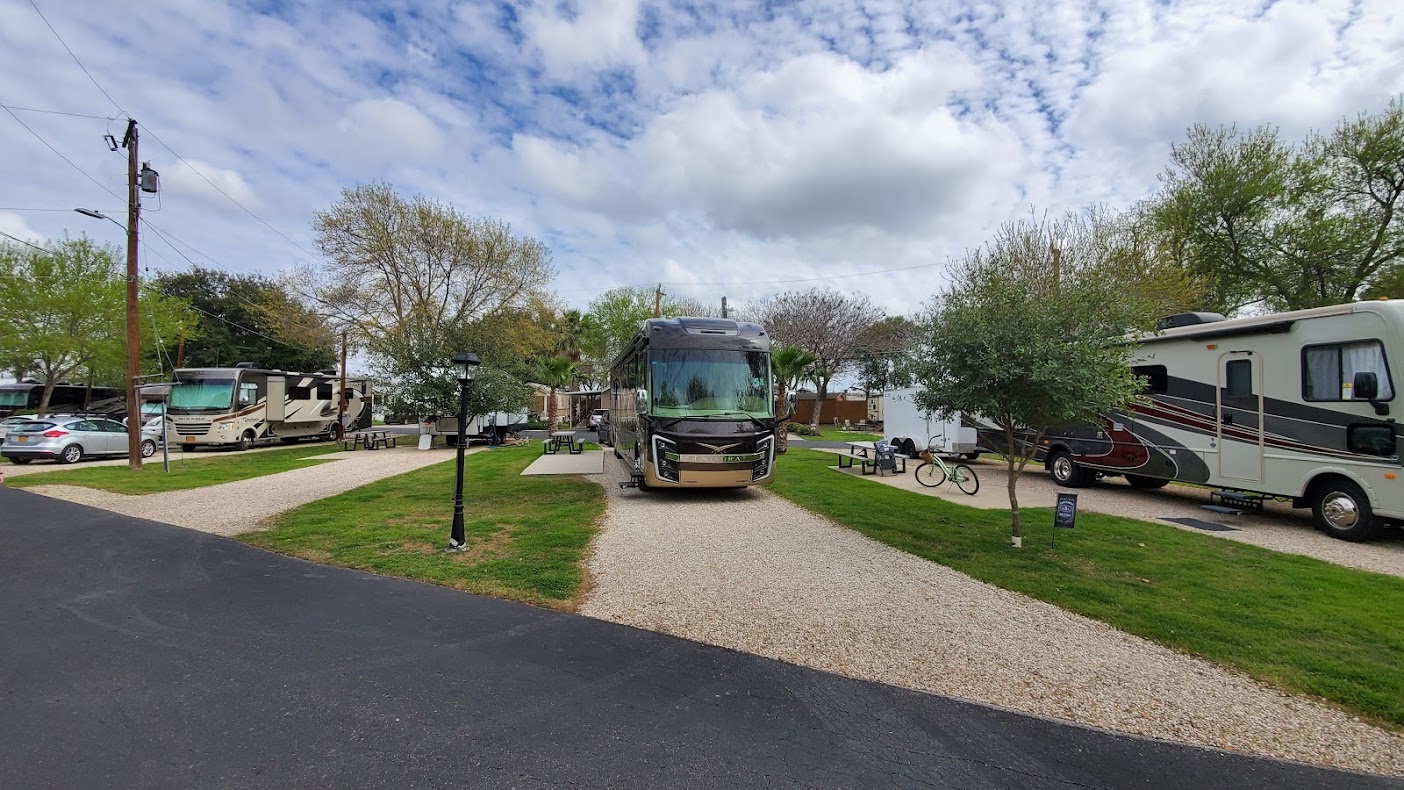 While there is a very convenient bus stop across the street from the resort, each time we went into the city we ended up driving, finding relatively inexpensive parking lots. Strolling along the Riverwalk is always fun so despite the chance of showers in the forecast, that’s where we headed on our first day. Yes, it was a six mile kind of day.

Good thing we walked so many miles and burned a few calories because we were again lured by the bright colorful umbrellas of Casa Rio restaurant, the oldest restaurant on the Riverwalk, to get some lunch (we had eaten here in 2016). While we chomped away on their complimentary chips and salsa, we both ordered the Regular Plate ($9.40) which included a cheese enchilada, a tamale, chili con carne, mexican rice and refried beans. It was good, not the best food you will find here, but the view is hard to beat!

And while eating we were entertained watching the birds swoop in and attack leftover chips left on uncleared tables vacated by diners.

Luckily, we had just paid our bill and were ready to leave when, as promised by the local meteorologists, the skies opened up – it was a torrential downpour. But no worries, we were able to grab a couple of seats in the covered waiting area of the restaurant. Fortunately the rain didn’t last long, perhaps 20 minutes, so we were able to continue our walk.

On a separate visit to town, we decided to check out Casa Rio’s sister restaurant, Schilo’s Deli which is one of the oldest continually operated restaurants in the State of Texas. Housed in an old mercantile exchange building dating back to the 1800’s, Schilo’s has been serving German and American deli favorites since 1917 when the majority of citizen’s were of German descent.

Yep, it was time for some Weinerschnitzel! Yum, very good! (hint: but maybe not quite as good as the Weinerschnitzel we found in Fredericksburg TX, but that’s the subject of a future post). We enjoyed Schilo’s so much we returned for lunch on another day. On our second visit, I opted for their home made signature dishes – a cup of homemade pea soup ($3.50), a Reuben ($9.50) and a mug of their home made Root Beer ($2.90). Surprising since I don’t normally drink soda but I just couldn’t resist a home made Root Beer! Everything was delish! Rob went the breakfast route, ordering scrambled eggs with pancakes.

After doing some research, on yet another breakfast excursion, we decided a trip to the King William historic district to visit the Guenther House, located along the San Antonio River, was a must do. 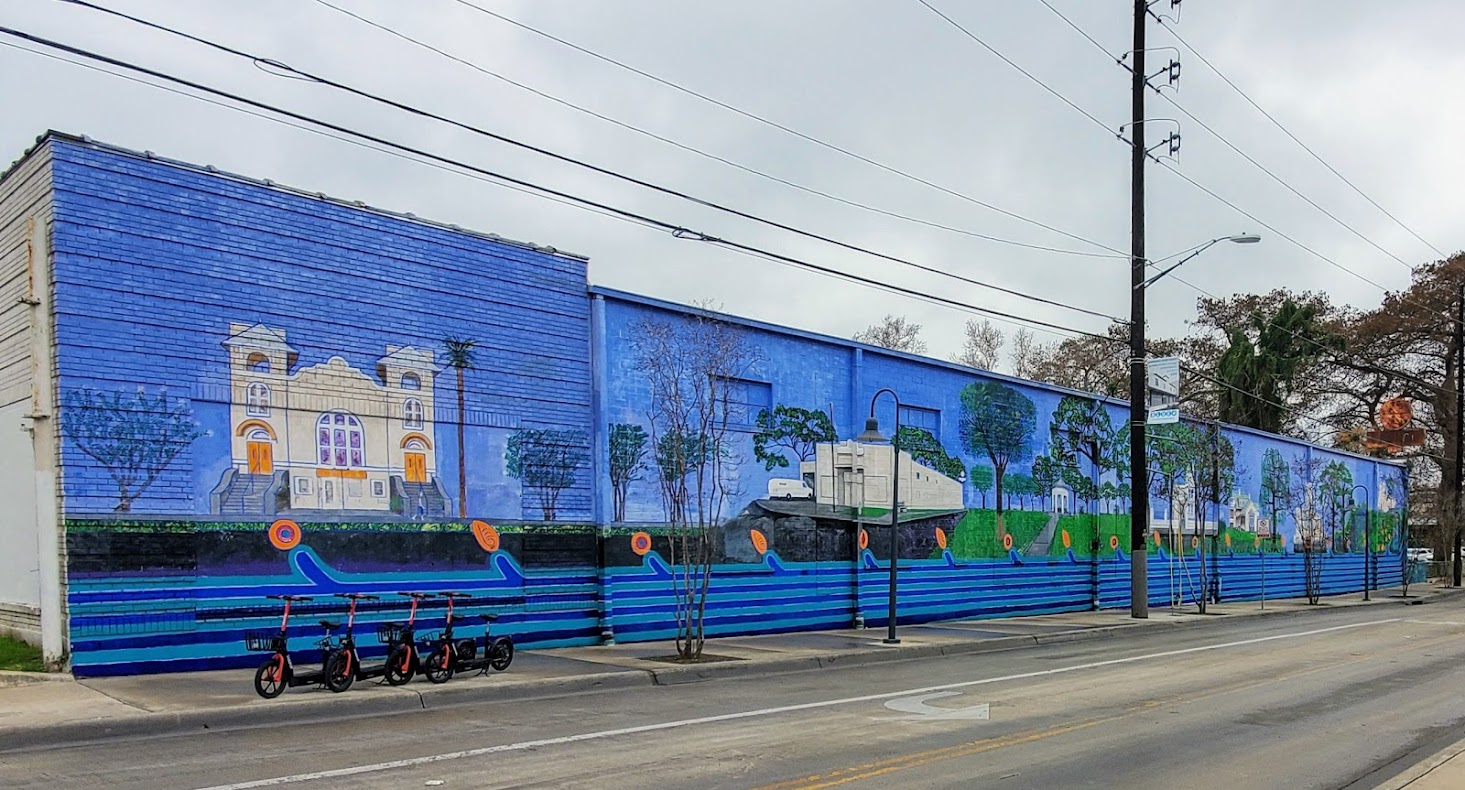 Built in 1859 by German immigrant, Carl Hilmar Guenther, the house and the Pioneer Flour Mills have a very rich history. Through his efforts until his death in 1902 and those of his sons, the company became the biggest flouring and grist milling operations in the American Southwest. 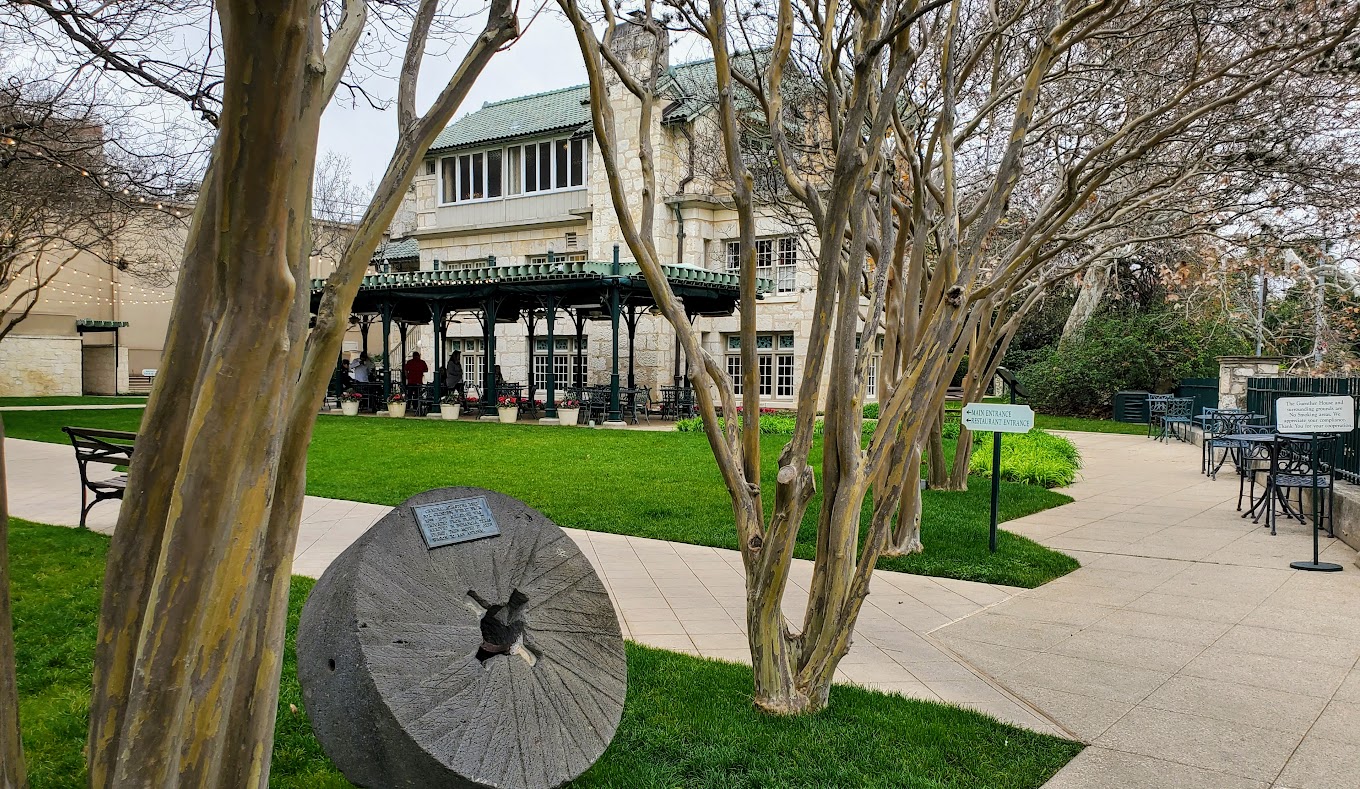 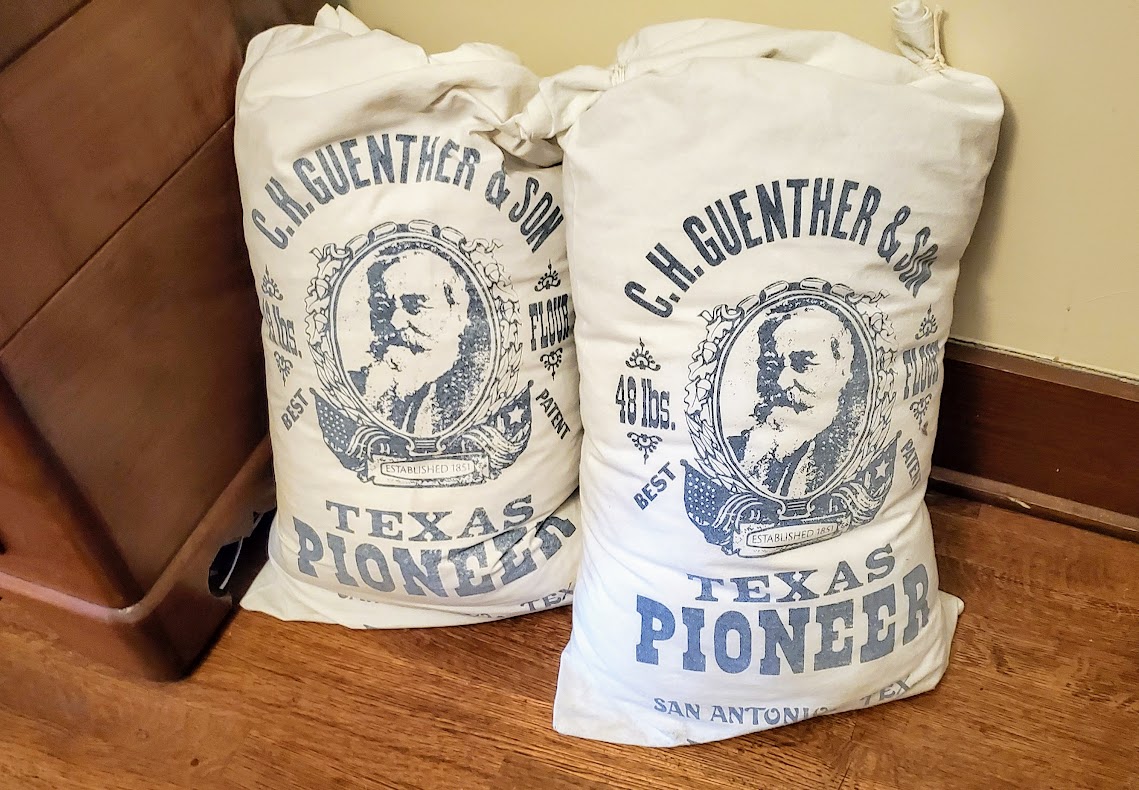 After 167 years, once known as the oldest family-owned business in Texas, C.H. Guenther and Sons was sold to an investment company. Today the company employs 2,500 people in 19 food manufacturing locations in the U.S., Canada, and Western Europe. Over 200,000 people visit the Guenther House each year. This short video will give you an idea of the extent of their business and how much they produce.

After several years of renovations, the home was opened to the public in 1988 as a restaurant, museum, banquet facility and gift shop. Since we had to wait for a table, there was an abundance of time to explore the beautiful, well maintained grounds as well as the historic rooms and displays inside. Wow, we didn’t realize that there was so much more to see and do here other than just eating in the restaurant. 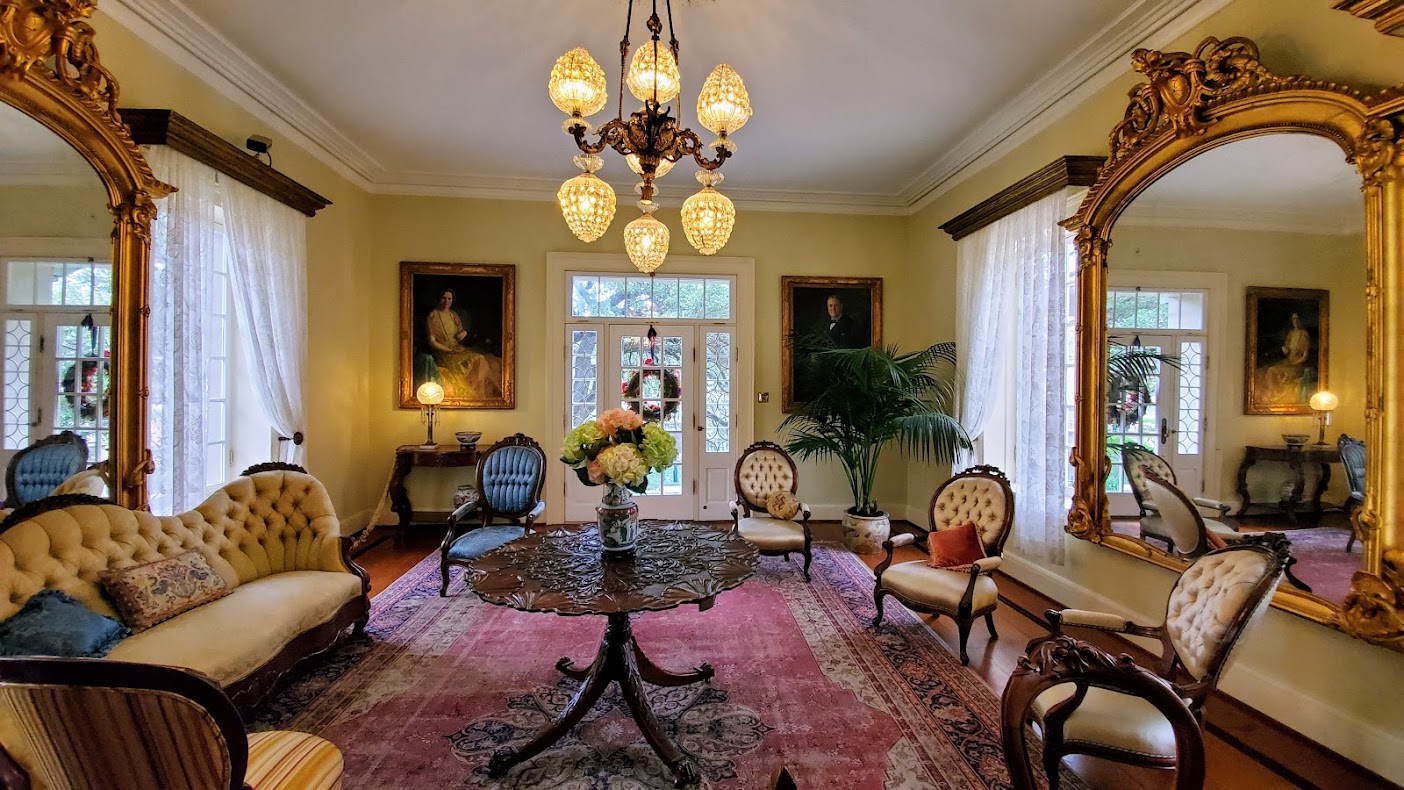 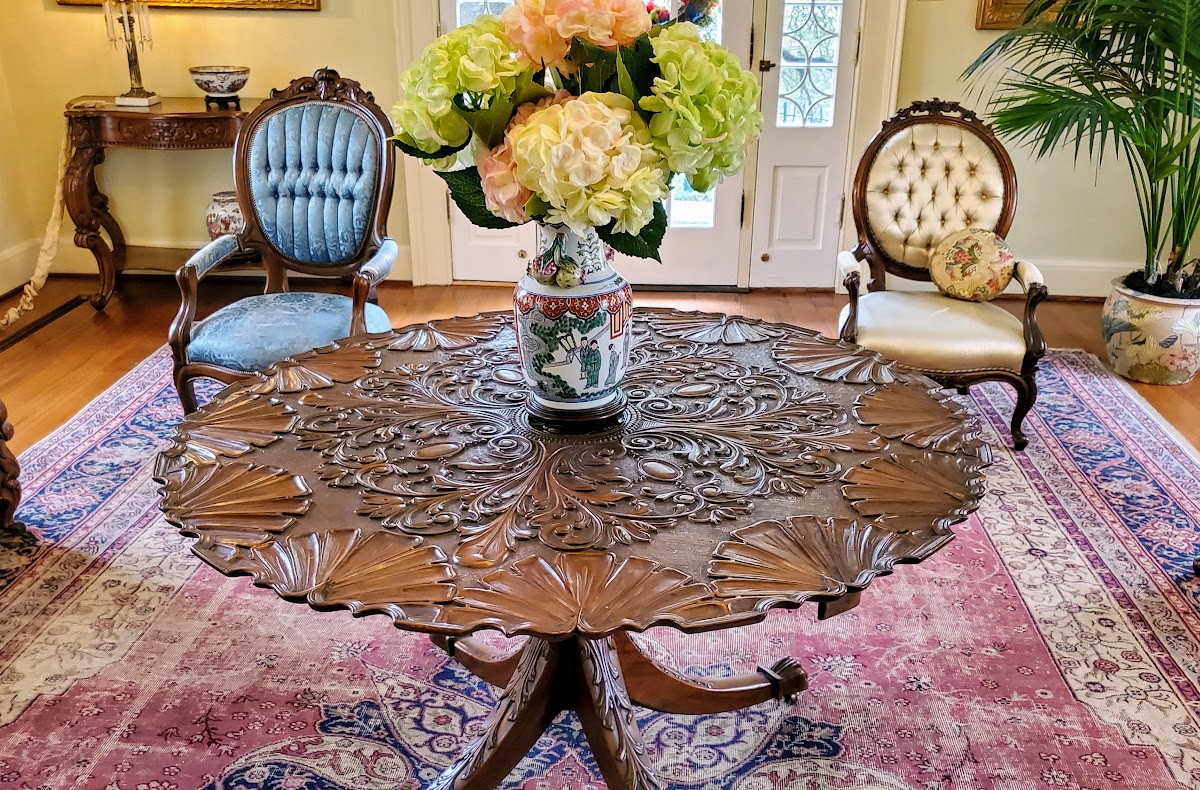 Each room, the Parlor, the Roof Garden, the Museum and the Restaurant had it’s own story to tell through the decor. The assortment of mill memorabilia, the anniversary Dresden plates on display in the Museum, the gorgeous furniture in the Parlor, the stained glass in the Restaurant, various paintings and even the chandeliers and the lighting fixtures depicted the history throughout the decades. The Gift Shop which was once a music room and a bedroom featured an assortment of gourmet mixes made in the Pioneer Flour Mills as well as kitchen, cooking and bakeware items. 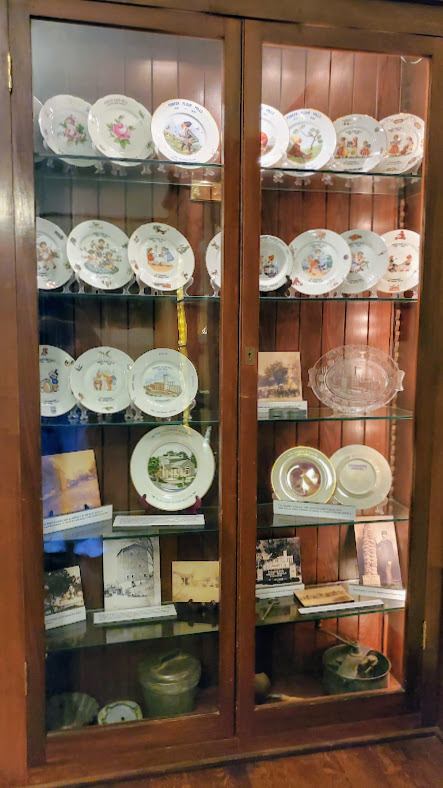 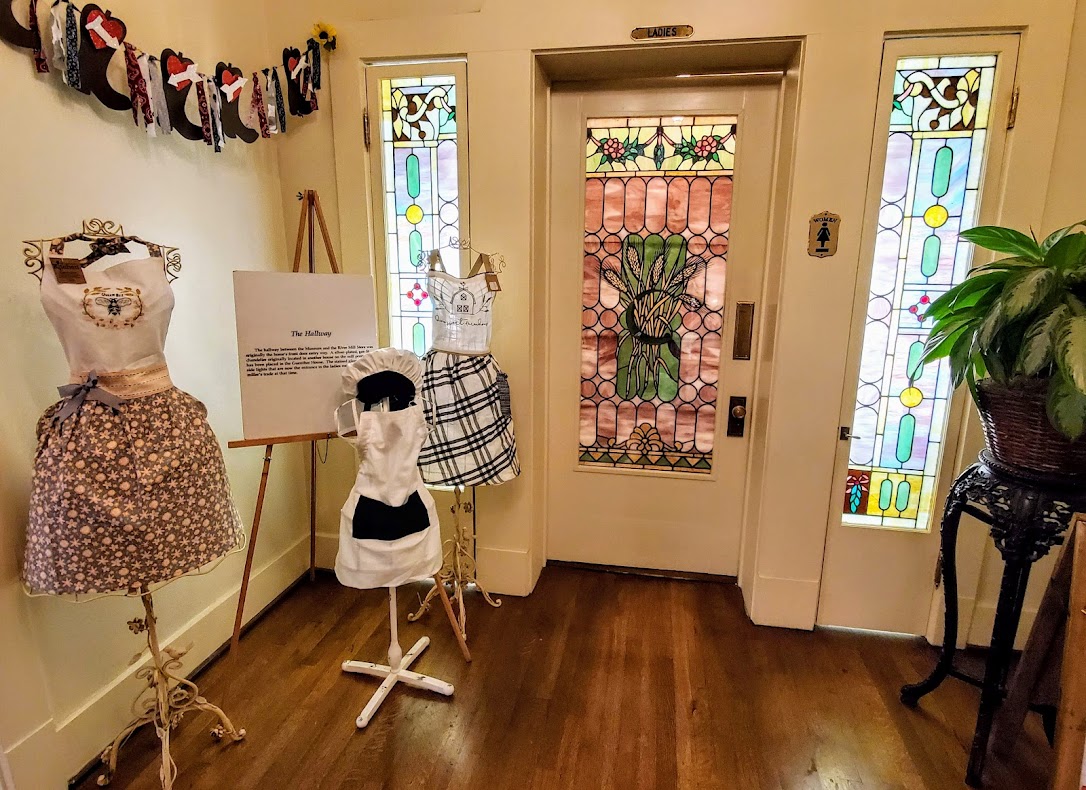 So many delicious sounding breakfast items on the menu! Tough choice but ultimately we both ordered the 1851 Breakfast Platter ($12.95) which included a fluffy Pioneer Biscuit, a side of Pioneer’s Country Gravy with crumbled sausage, served with Pioneer breakfast potatoes, two eggs, Applewood smoked bacon and a choice of pork sausage patty (what we had) or chicken sausage link. Delicious but way too much food! 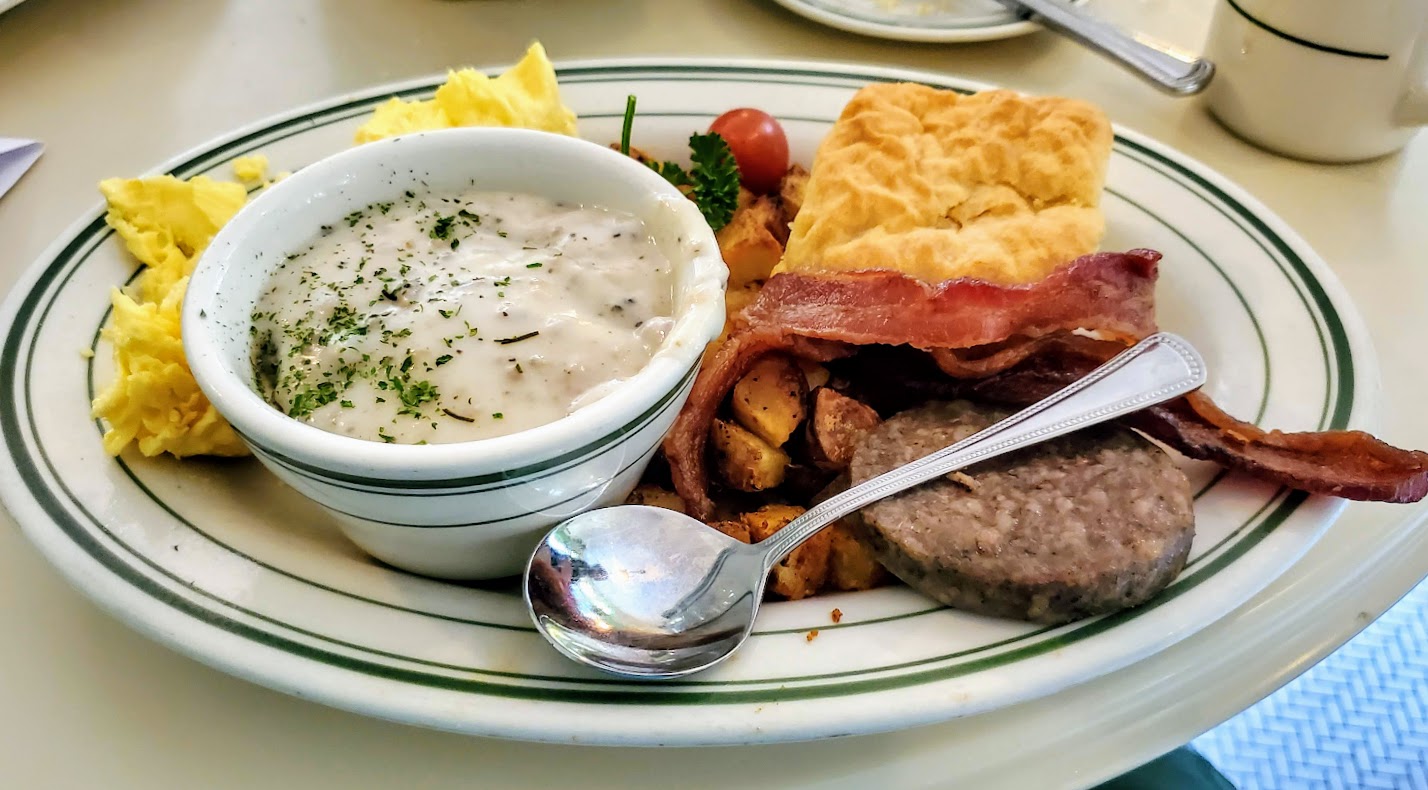 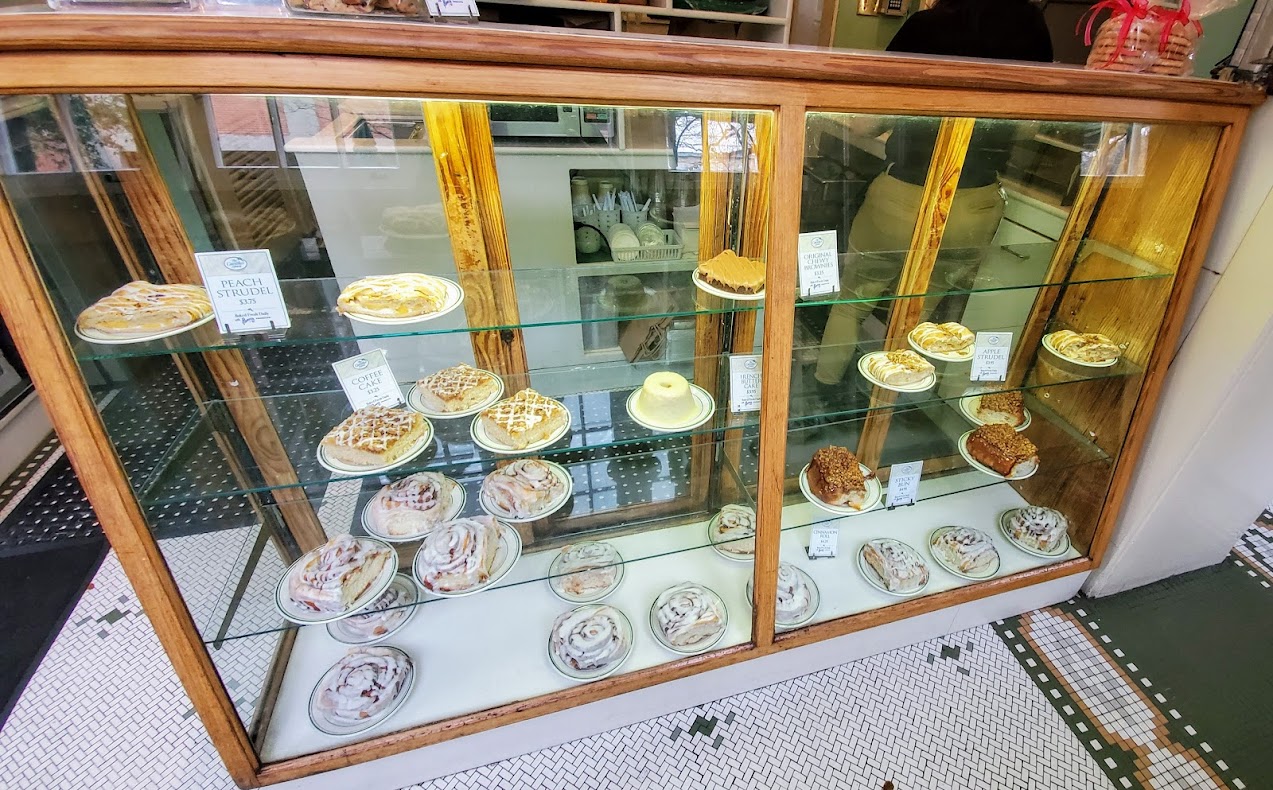 After breakfast we walked around the neighborhood for a bit admiring the architecture of the mansions in the area. We didn’t realize at the time but there are four walking tours of the district which might have been very interesting. Maybe next time! 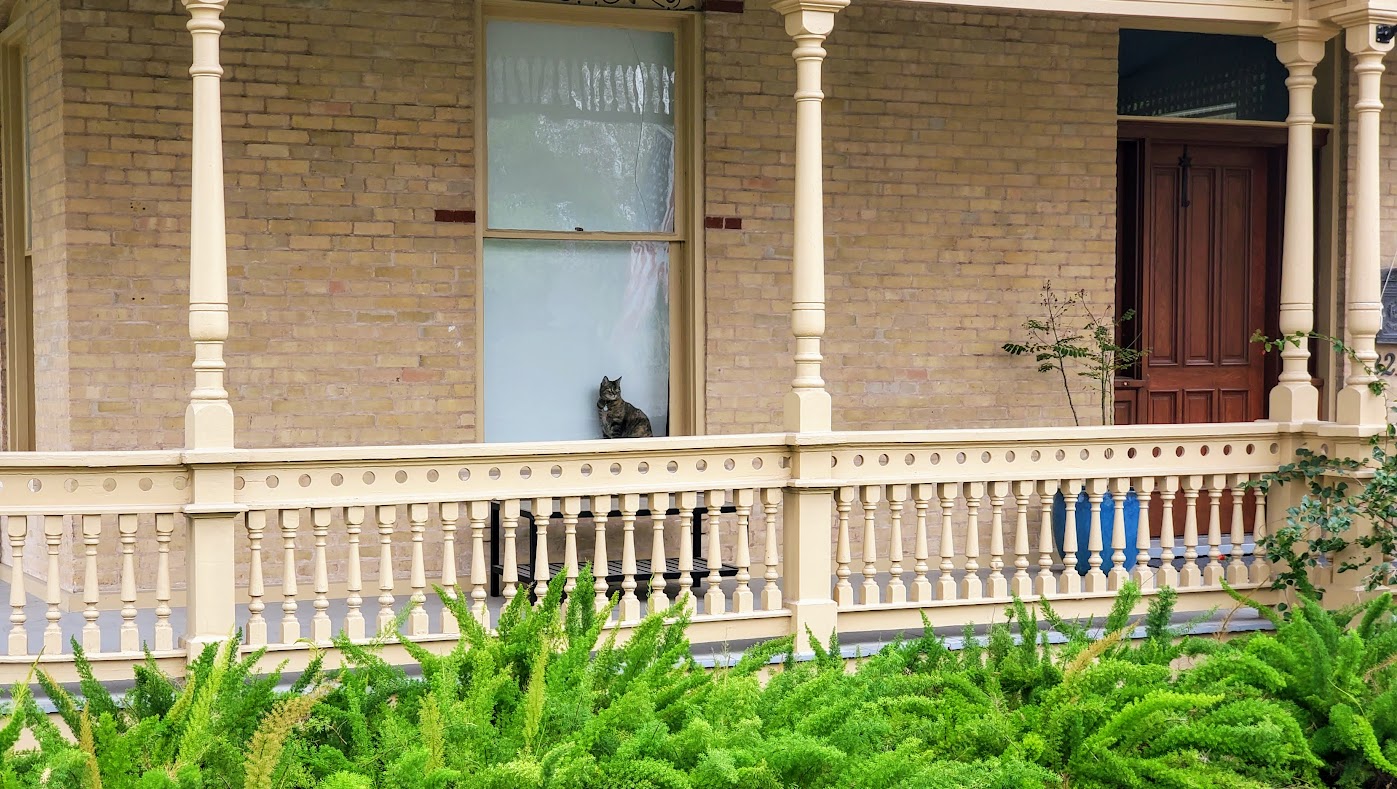 When we next returned to the Riverwalk, we decided there was no need to take the very interesting Rio San Antonio Barge Tour again which was a good thing, with a Mardi Gras celebration looming on the horizon, the tours were quite crowded. Taking the hop on and off Rio River Taxi would provide us with the same opportunity to enjoy a cruise on the river. Even without the tour narration, we still enjoyed seeing revisiting the sights along the river. Plus the River Taxi goes well beyond the downtown Riverwalk loop and will take you all the way up Museum Reach, thru the locks and to the Pearl area. Because the San Antonio River falls approximately nine feet between Museum Reach and the Pearl Brewery, the barges must travel through the AT&T Lock & Dam. Fun actually being on a boat sitting in the lock waiting for the river water to rise or fall depending on which way you were travelling. 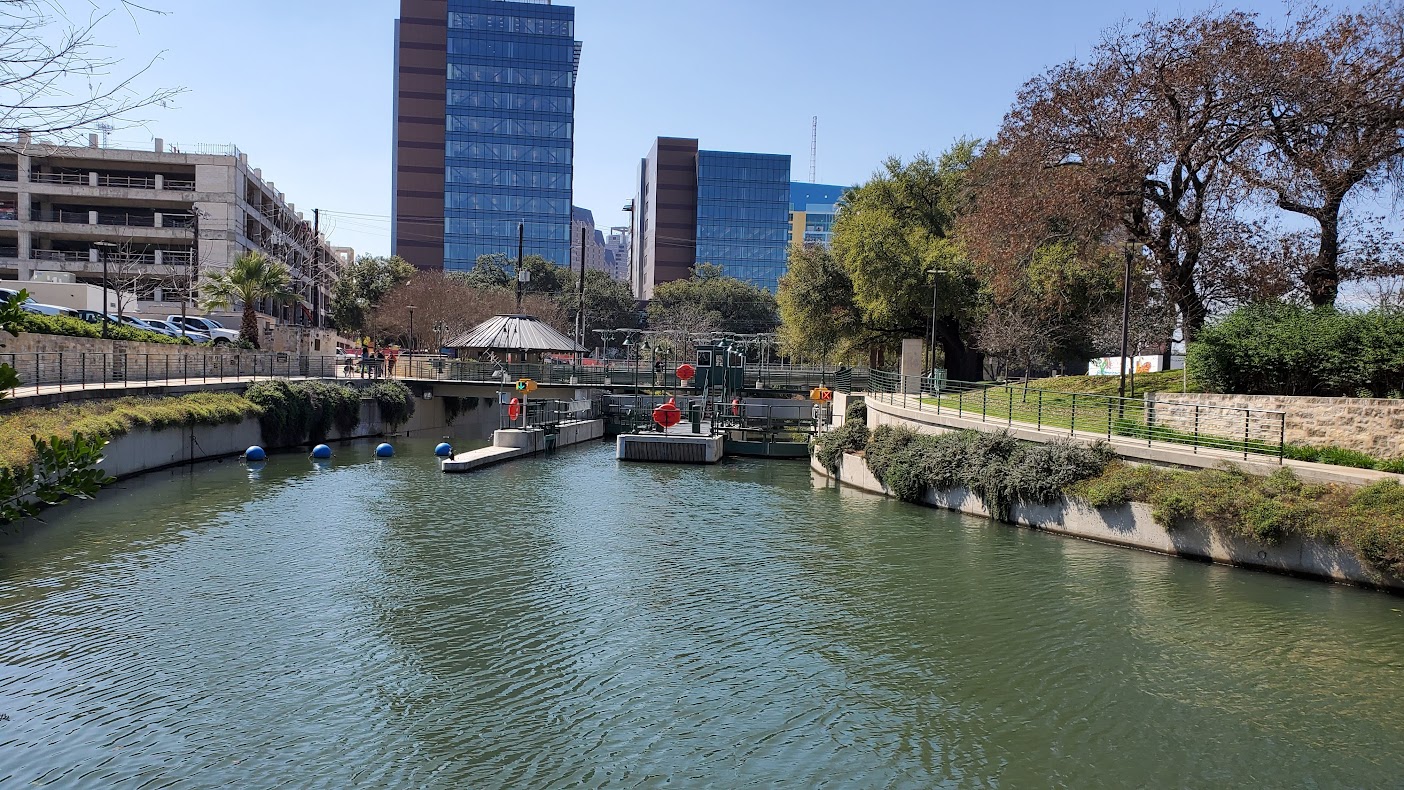 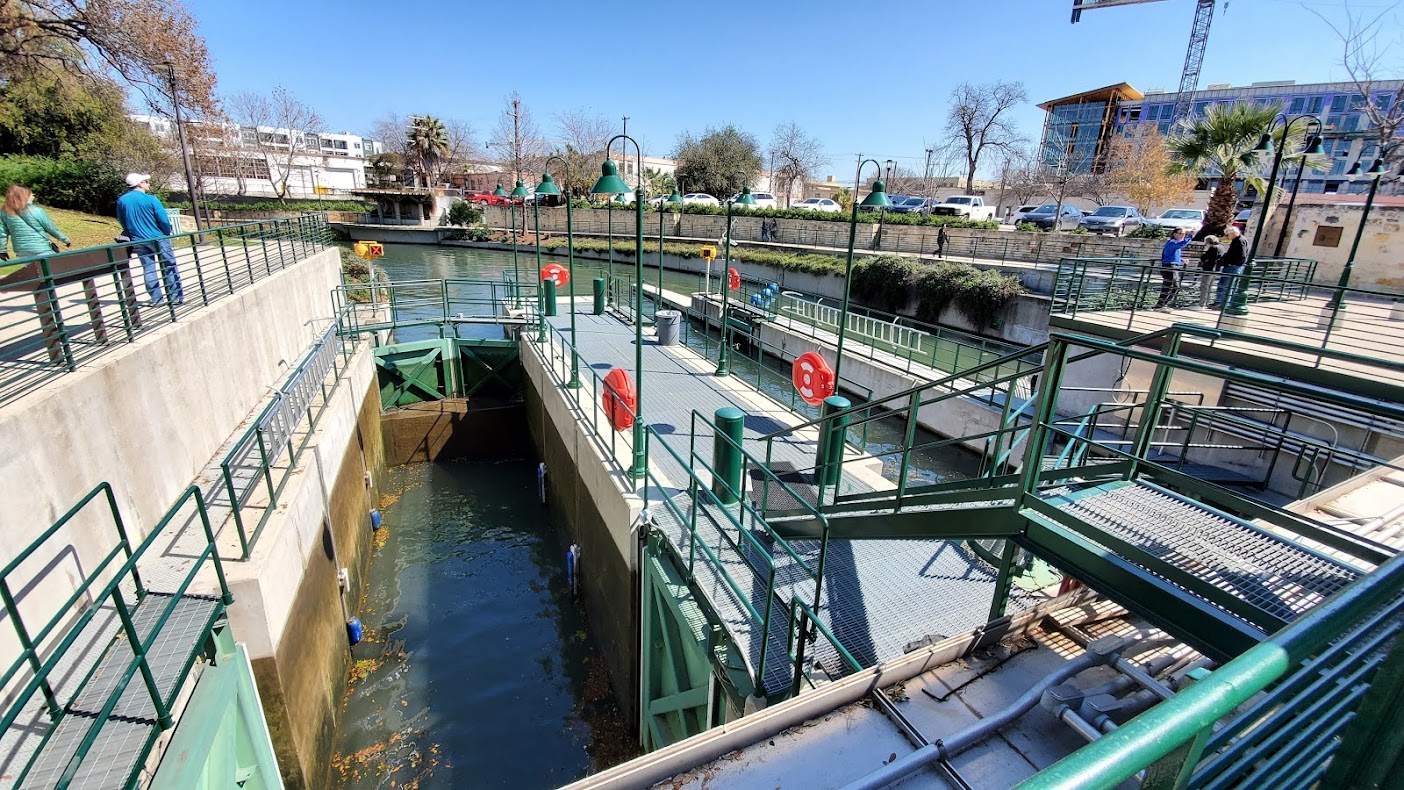 Along the way there are a lot of things to look at, not only the beautiful flowers and shrubs and the museums, but there are also mosaic murals and sculptures. Our favorite though is the school of 25, seven foot long, hand-painted fiberglass resin giant sunfish floating in the sky under the interstate overpass. Named F.I.S.H. and created by Philadelphia artist Donald Lipski, these fish are so cool, whether shimmering in the daylight or aglow at night. Once we disembarked at the Pearl Brewery Shopping Mall area, we wandered around for a bit, eventually stopping at the Lick Honest Ice Cream shop. A scoop of Grandma’s Lemon Cake Roll for me which is described as “our classic buttery lemon cake, combined with tart Meyer lemon curd and cream in our ice cream, tastes just like Grandma Hilda made it!” Not sure who Grandma Hilda was but her ice cream sure was yummy! 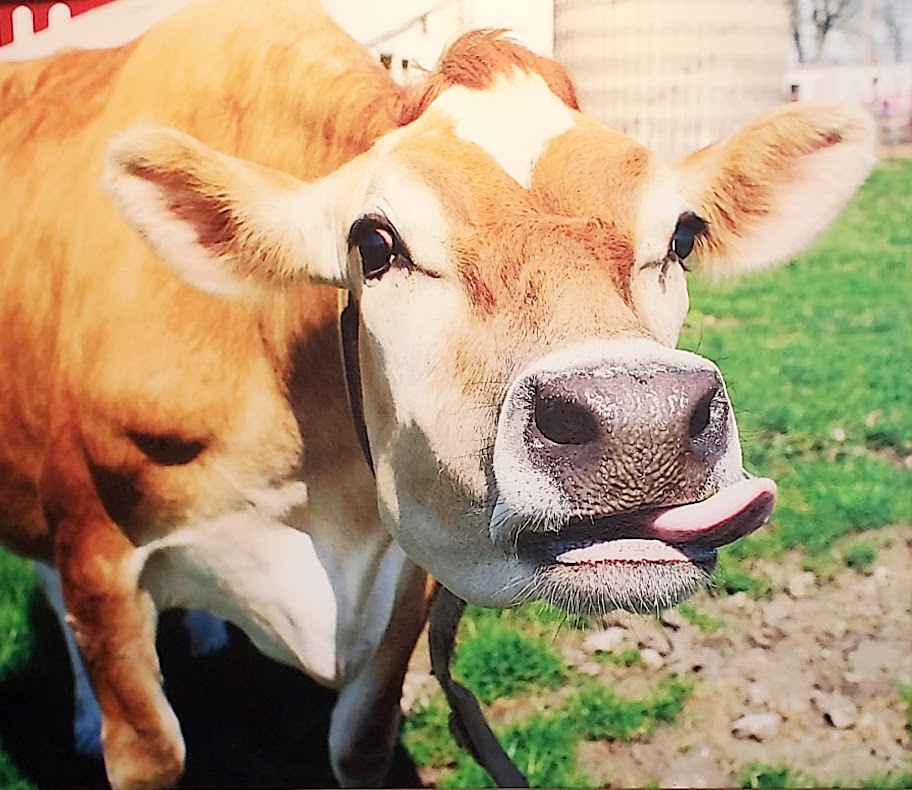 As usual, my chocaholic hubby chose a scoop of Dark Chocolate Mocha described as “Austin’s own Third Coast Coffee beans steeped in our SRSLY (seriously) Chocolate ice cream and finished with a splash of Revolution Spirits’ Cafecito coffee liqueur and a swirl of chocolate sauce”. Wow, certainly not your average Breyers chocolate ice cream! It was a perfect mid afternoon treat after such an exhausting day on the river! Plus it helped keep us going until it was time for our evening plans.

During our last visit, we learned about the 4:30 p.m. to 7:00 pm Happy Hour at Bar 601 in the Tower of the Americas, a 750 foot observation restaurant tower, built as the theme structure of the 1968 World’s Fair, HemisFair ’68. Since we loved the atmosphere, the awesome view of the city and the Happy Hour food offerings, a return visit was a must. 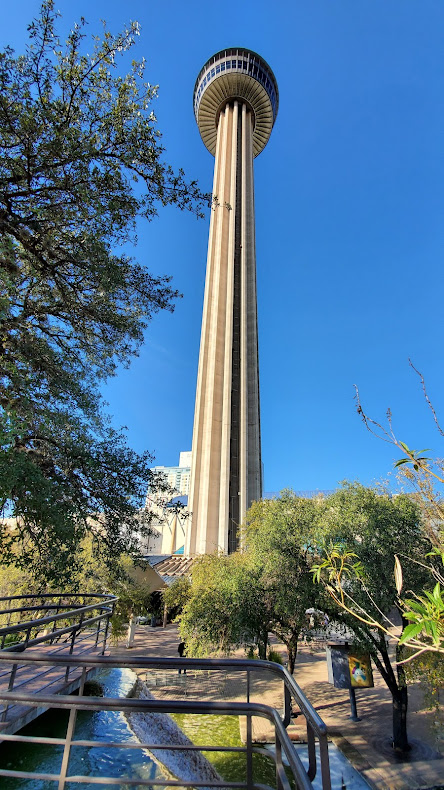 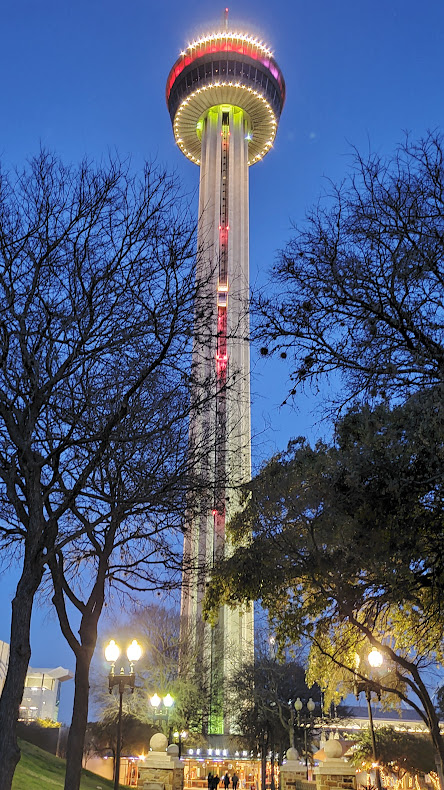 Tickets to the Observation Deck which include unlimited access to the Flags Over Texas Observation Deck & the 4D Skies over Texas Theater Ride are $14.50, $12.50 for senior or military, and $11.50 for children 4-12, children under 3 are free. However, taking the separate elevator to the Chart House revolving restaurant and Bar 601 is free. Well, free that is if you don’t order any drinks or food! 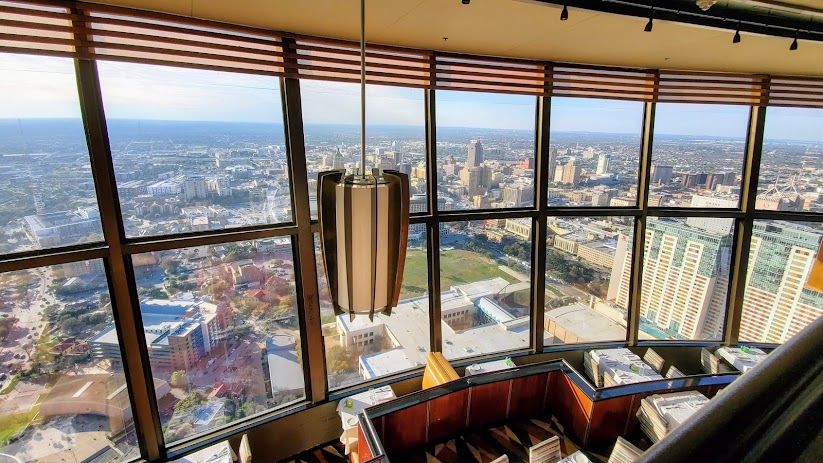 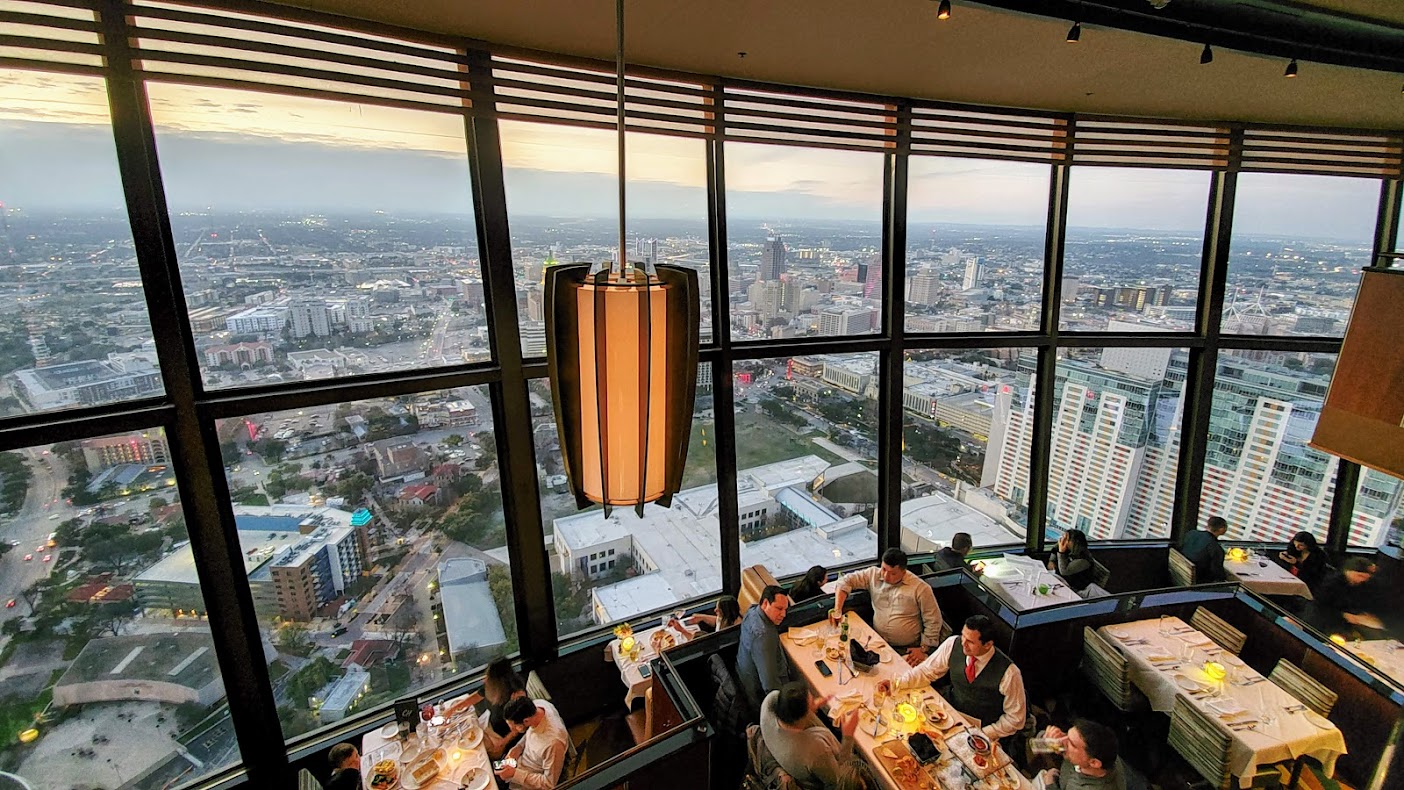 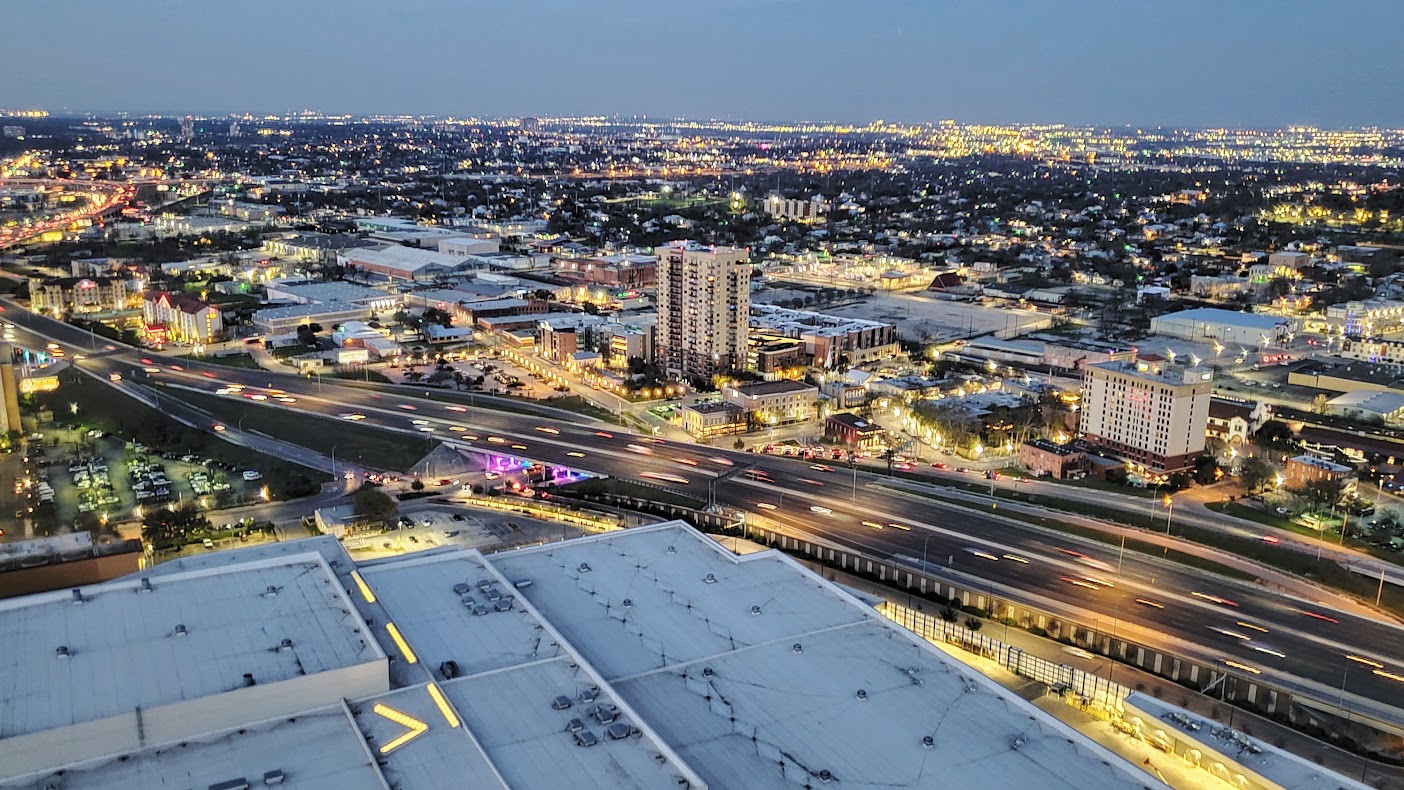 After a little bit of a wait for the elevator, we arrived at Bar 601 and found a seat with awesome views of the city. The second visit definitely didn’t disappoint! Kim Chee Calarmari ($6), Fish Tacos ($7) and Truffle Skinny Fries ($4) accompanied our $6 adult beverages. Everything (especially the calamari) was delicious! 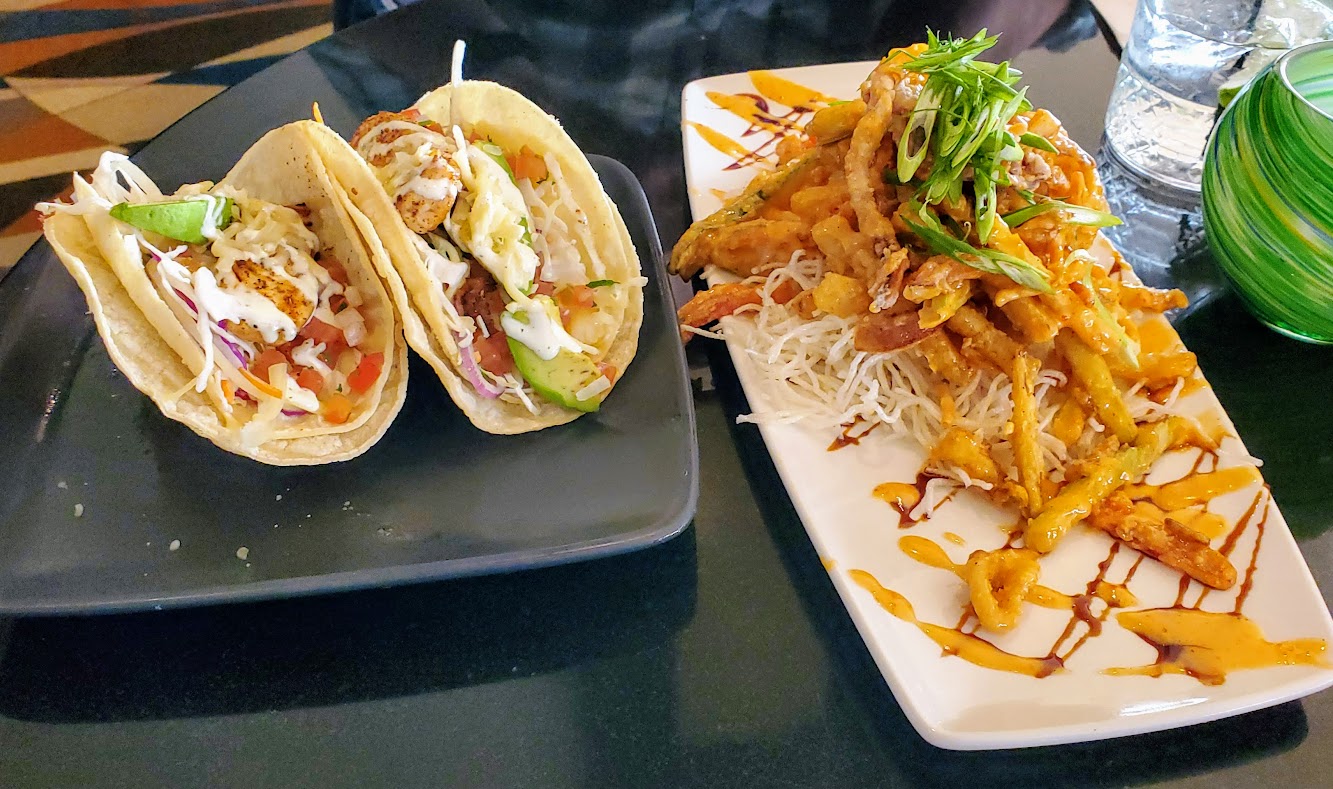 Unfortunately some clouds moved in ruining what could have been a spectacular sunset. Too bad but the view and the ambiance was pretty spectacular even without a gorgeous sunset! Fortunately it was early enough when we left the Tower so we enjoyed a leisurely evening stroll back to the river taxi stop which stops operating at 9:00 p.m. 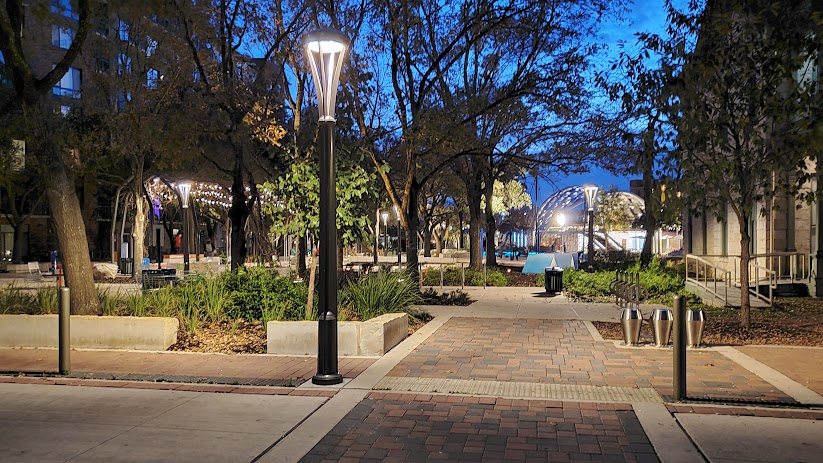 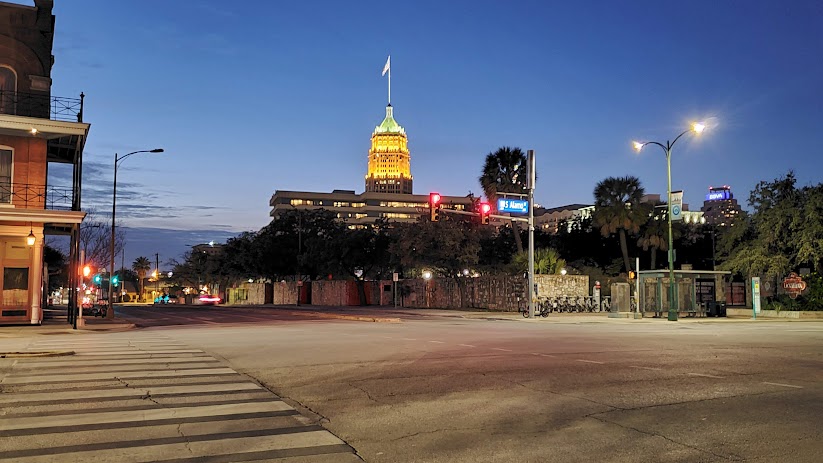 Two days later, it was time to pull up stakes and say goodbye to San Antonio again. Where to next?  It would only be a short, one hour drive heading north to Hill Country, a new destination for us. Stay tuned to read about our visit there….