History…it seems no matter how small the town or where it is located, each place has its own story to tell. That is what we found in the area surrounding Weimar, Texas, our next destination, approximately 130 miles from Galveston and 150 miles east of San Antonio.  Whispering Oaks RV Park, located right off I-10, would be our home for what we thought would be a bit of mindless relaxation for two nights. Once we arrived there, however, we realized that there was a lot to see and do in the area so it turned out to be a more active form of relaxation.

When we checked in at the office (note this was before the pandemic guidelines were put in place), not only were we impressed with the very friendly and helpful owner manning the desk but also that we were given a welcome gift – a bag of Jalapeno Brittle made by Kay Klauber Candies in nearby Columbus, Texas. Mmmm, mmmm, so good! Polished that off within a few minutes! Delicious with just the right amount of heat! Nice touch! 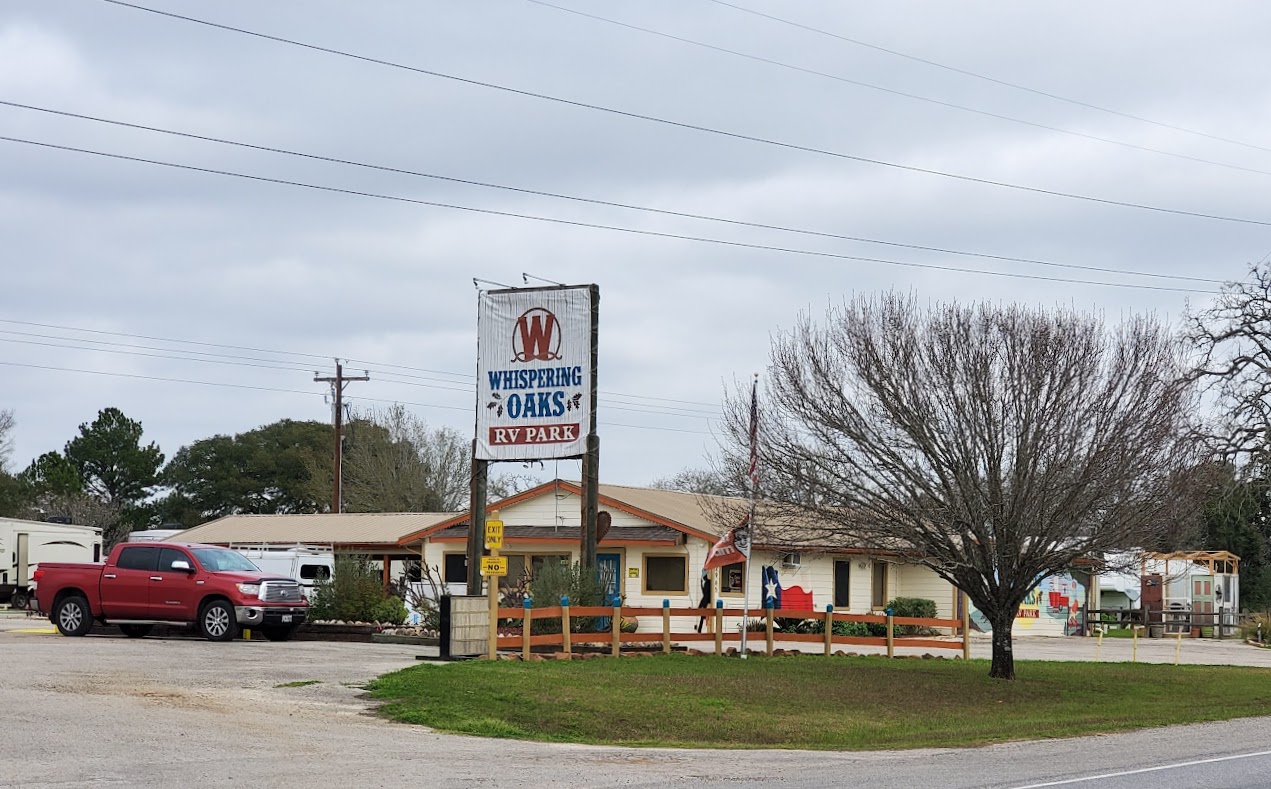 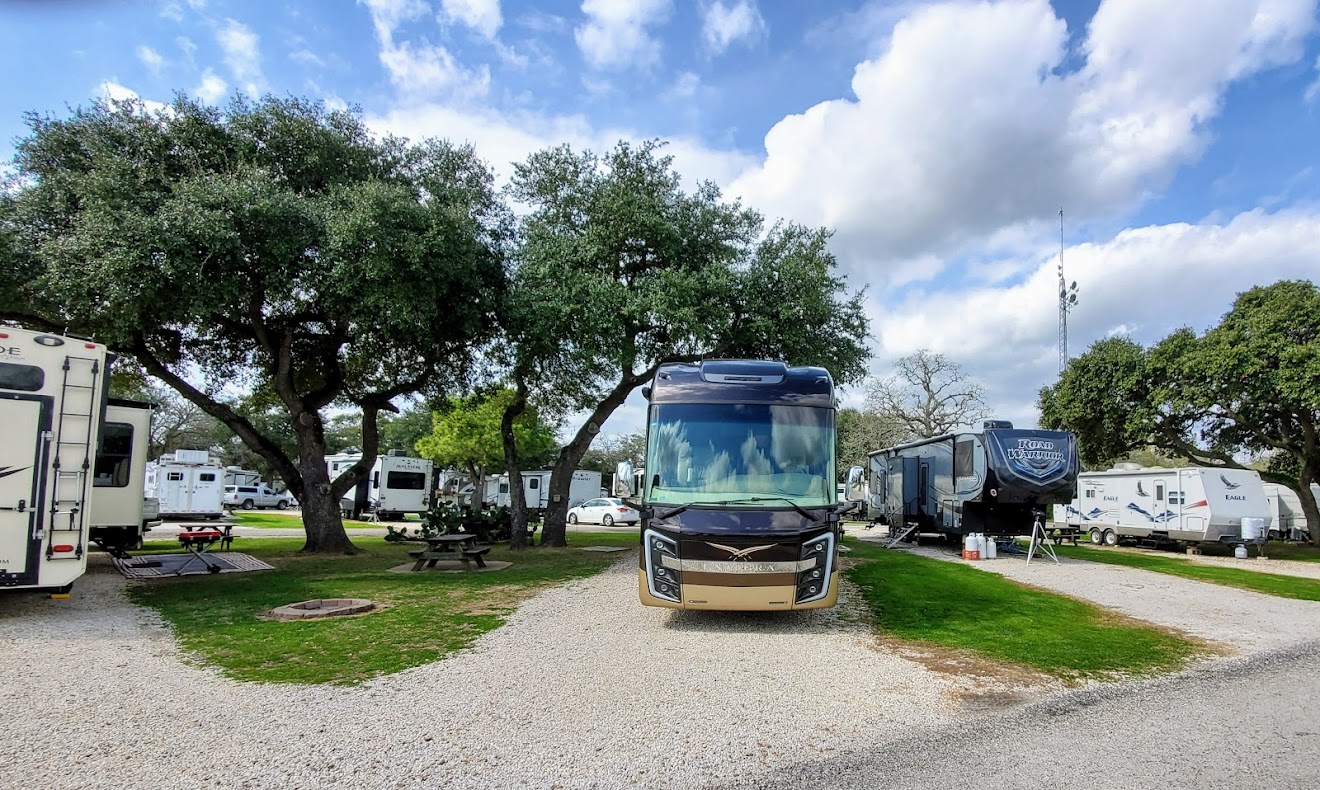 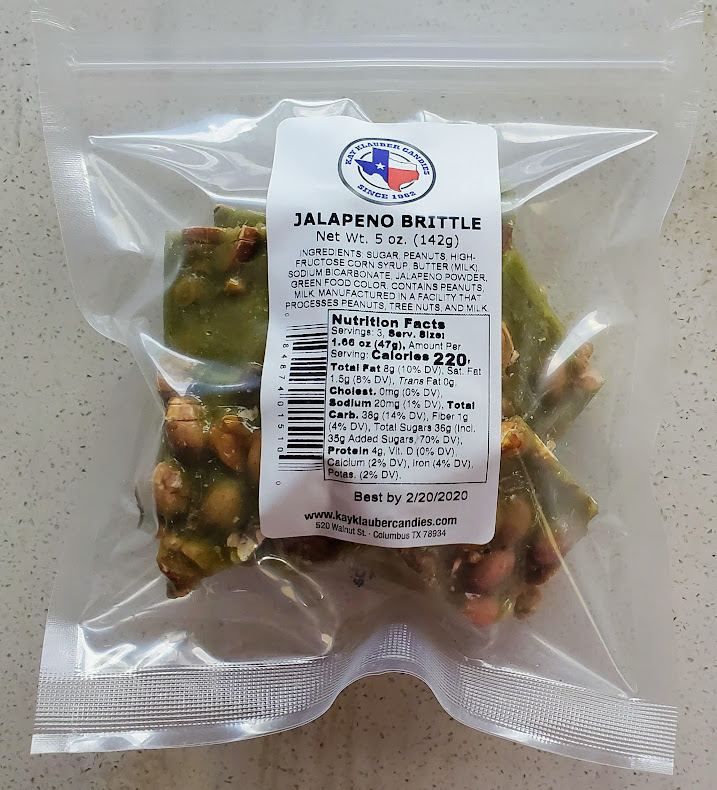 Once settled in, we did spend some actual time relaxing that afternoon, but the next morning as usual we were off and running. In nearby Columbus where the town motto is “City of Live Oaks and Live Folks” (you’ll understand why as you continue reading), we had planned on having breakfast at Beckey’s Cafe, but by the time these lazy folks arrived there, it was too late for breakfast.

No eggs for us but instead it was their Sunday special that sounded good – a boneless fried pork chop, smothered with gravy, served with rice, pinto beans, a pea and bacon salad and a roll. Very tasty food and plenty of it, which earned the restaurant a spot in our list of favorites in Google Maps!

Across the street from the cafe, a historical marker lured us over to what looked to be an old log cabin, the Abraham Alley Log Cabin.

According to the marker, Abraham Alley, the builder of the cabin, was one of Stephen F. Austin’s original “Old 300” settlers (settlers who received land grants as part of Austin’s first colonial contract in Mexican Texas). Built in 1836, the cabin actually was a replacement for Alley’s first home, which was set on fire and burned as settlers fled the oncoming Mexican army during the Runaway Scrape. Today, it is an example of the style of architecture known as the Texas Colonial Period. The cabin was moved to its current location in 1976.

In downtown Columbus, more history awaited us. Historic buildings lined the main street, below are descriptions of a few of them:

According to the Texas Independence Trail website, “Built in 1883 with 400,000 bricks, the tower originally supported a big tank filled with water used to douse downtown fires. When Columbus got a water system, the tank was taken off the top of the tower and the town tried to blow up the tower with dynamite. Its three-foot-thick walls wouldn’t budge. Now looking like a wayward tower from a medieval castle, it was turned over to The United Daughters of the Confederacy, which used it as their meeting place. In 1962 — during the battle years of segregation — it officially became the Columbus Confederate Memorial Museum.“ Open by appointment only, admission is $3. 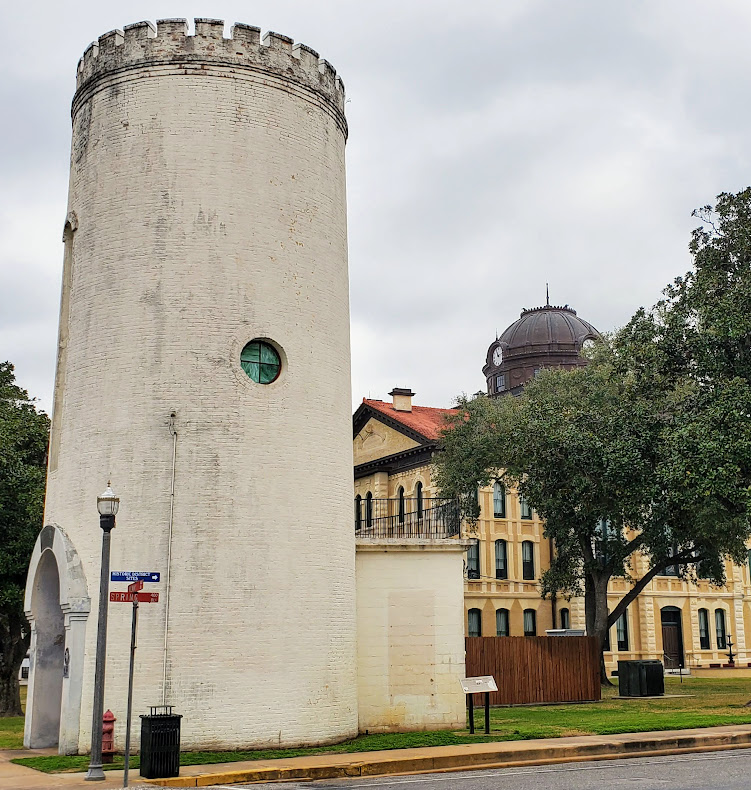 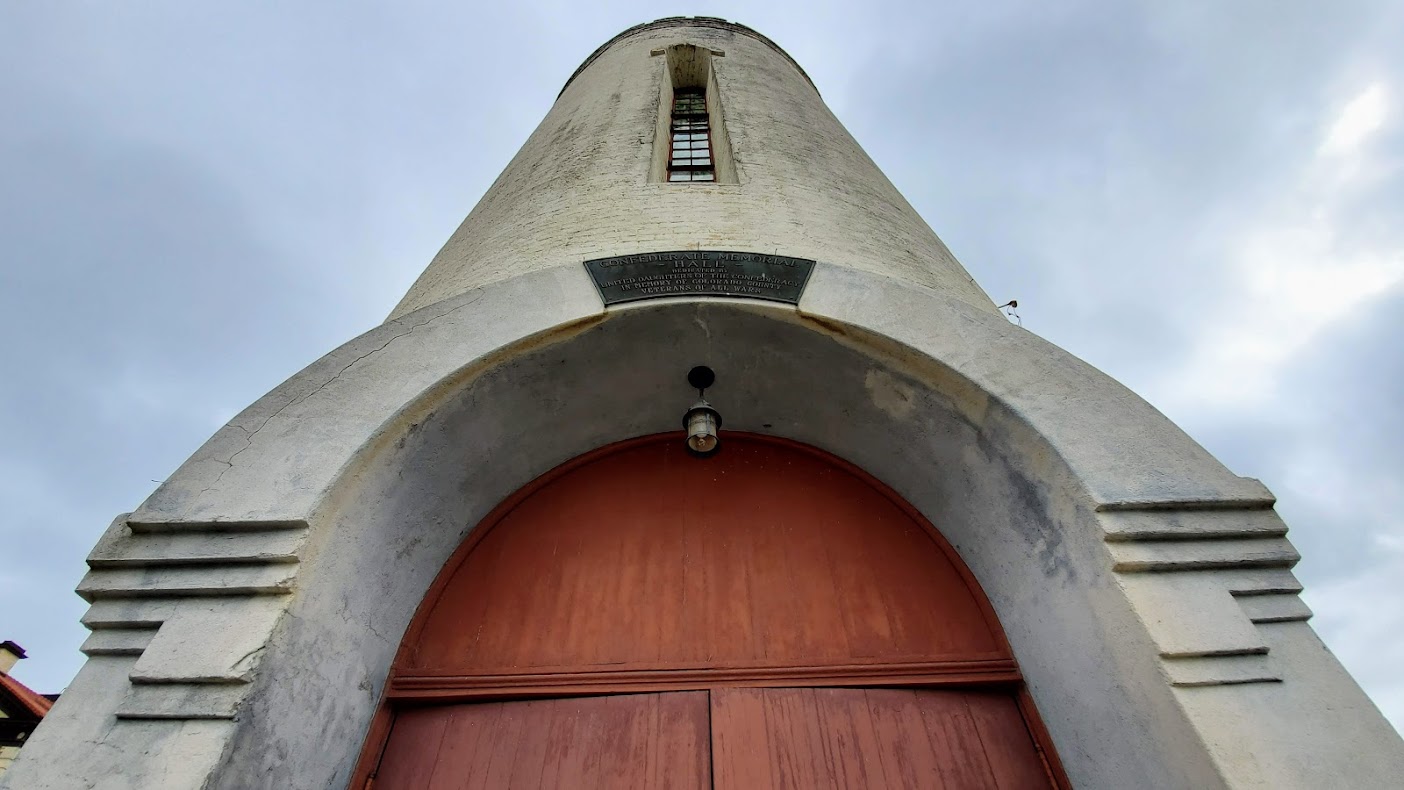 The Columbus building had a bank and dry goods store on the first floor and the theatre upstairs with seating for 1,000. 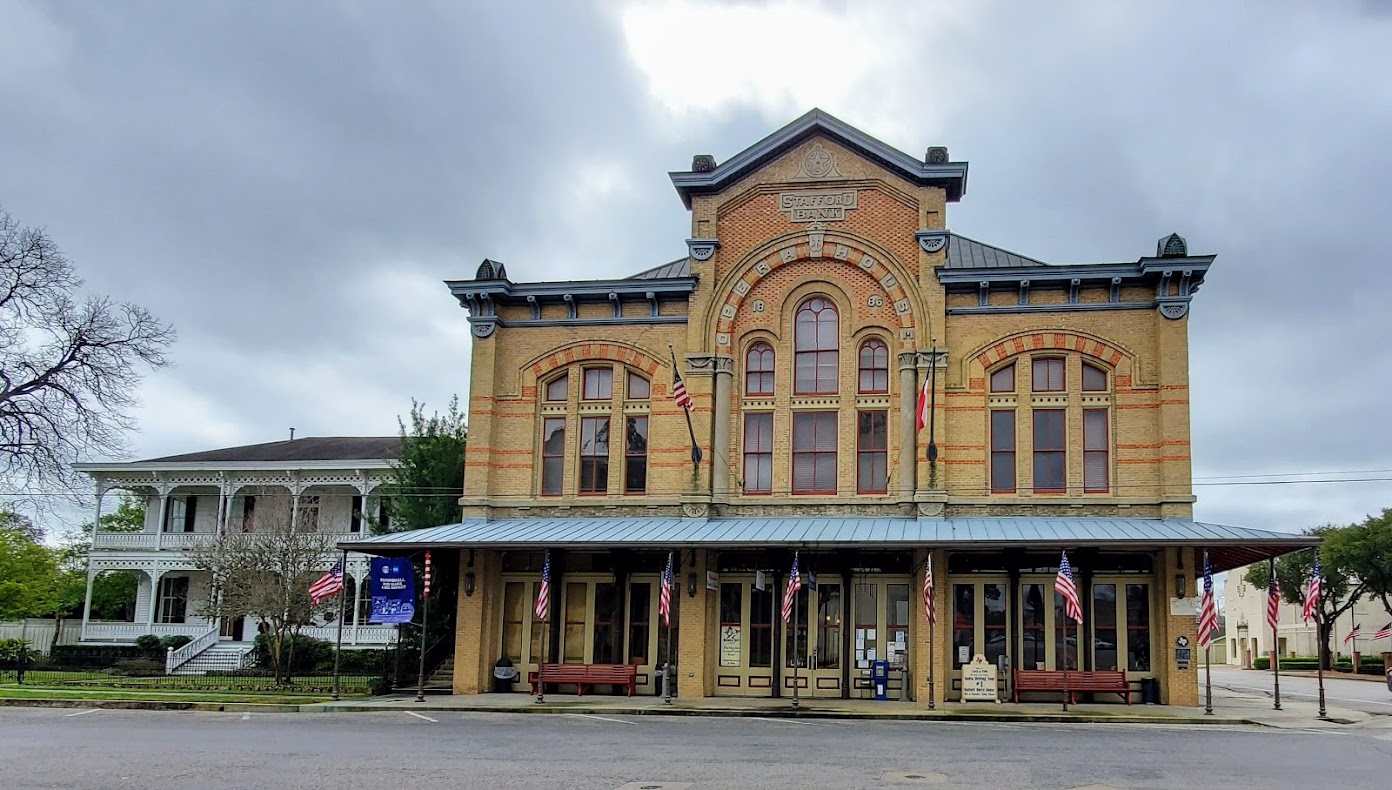 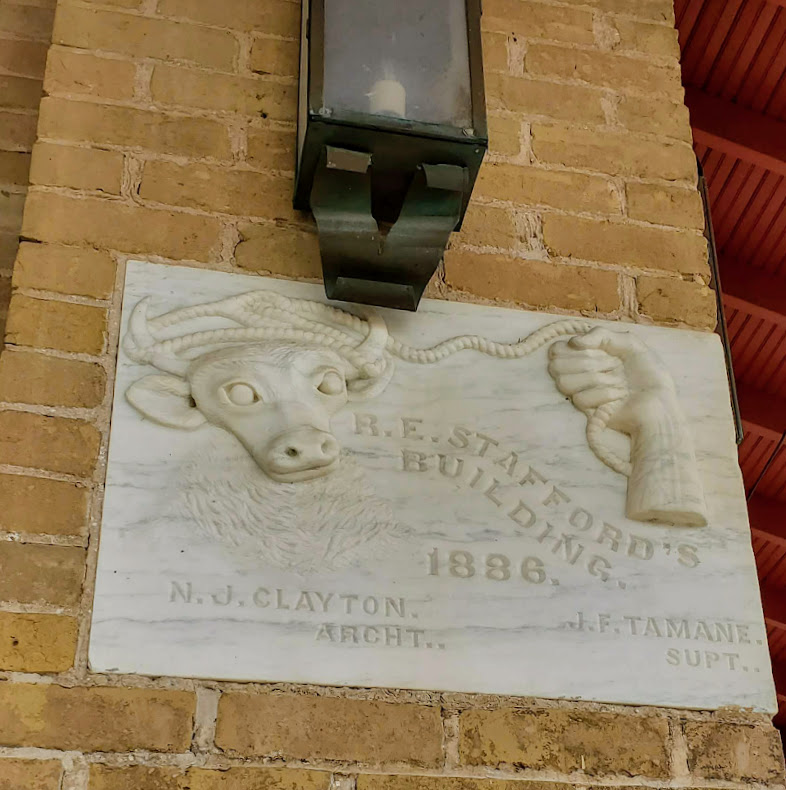 Written on the historical marker are the following words: “Ornate Victorian house built for millionaire cattleman – banker Robert E. Stafford (1834-1890), one of organizers of Columbus Meat & Ice Co. Stafford built home and Opera House in same year, 1886. By design, he could sit in his bedroom and see Opera House stage performances, next door.” 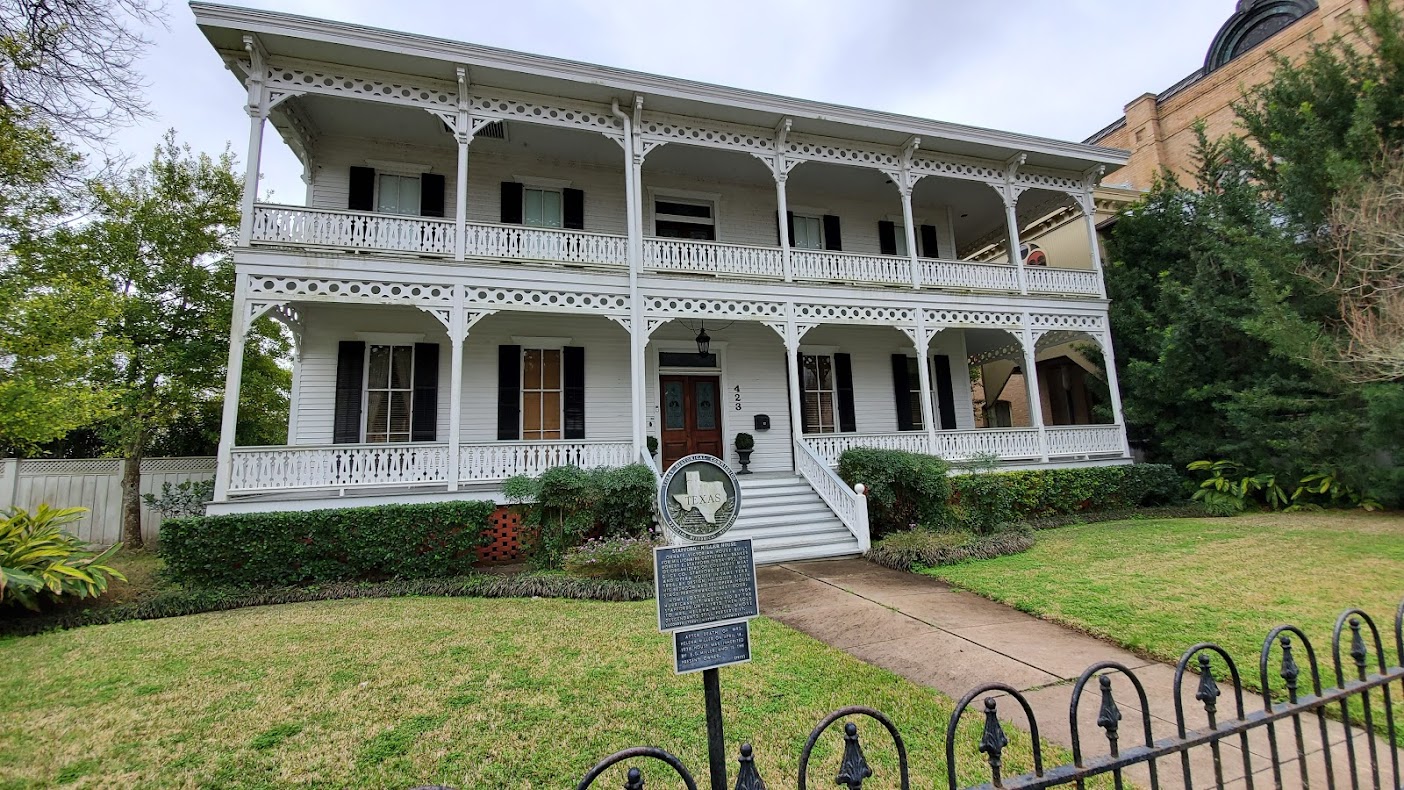 The home lost a cupola in 1909 hurricane. It was owned by the Staffords until 1915, then sold to Mrs. Helena Miller, whose descendants still preserve it.

Erected in 1890-1891 in the form of a Greek cross, it is now one of 28 oldest existing courthouses in Texas’ 254 counties. A tall clock tower rising from the center of a hipped roof was part of the original design but in 1909 a tornado caused considerable damage to the roof, causing the large bell in the cupola-clock tower to fall 120 feet where it was completely buried in the earth. When the courthouse was repaired, a more fashionable early 20th century Italian Renaissance Revival dome was added. It was renovated in 2013, when historic colors were restored. 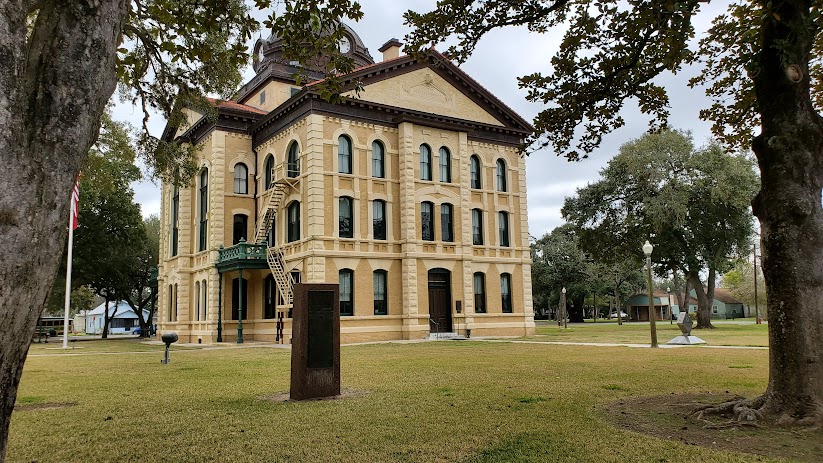 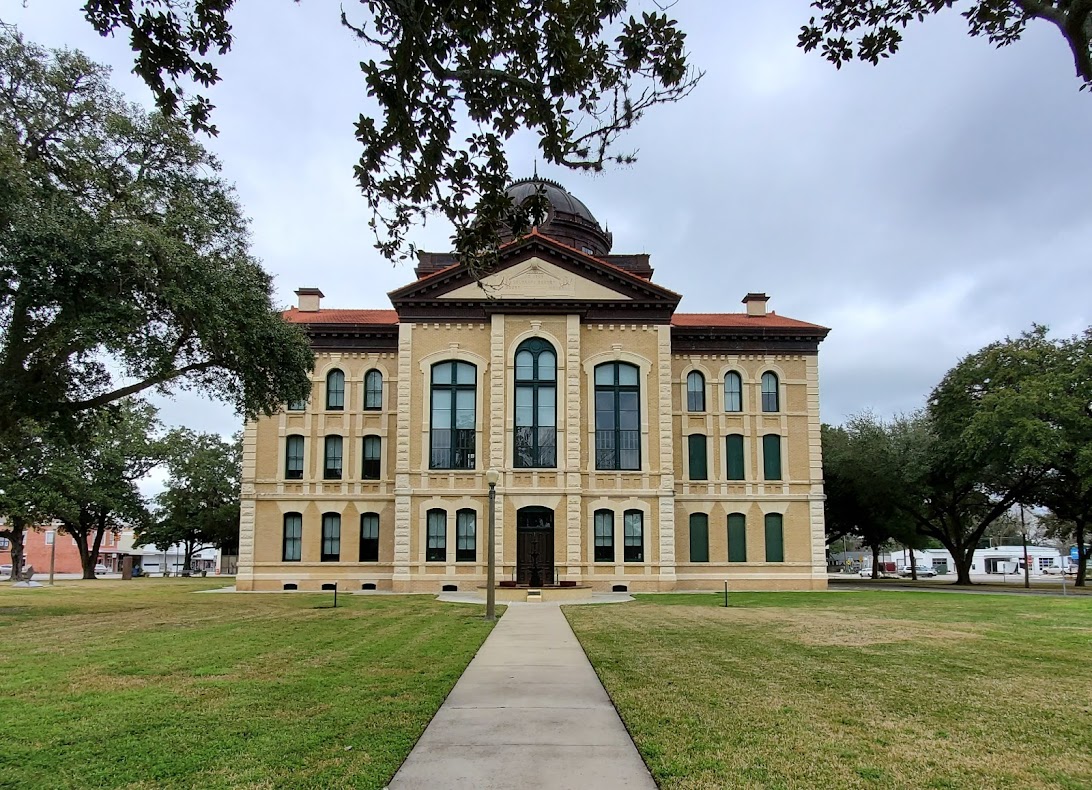 A short distance from town was a behemoth we just happened to stumble upon…Texas’ largest Quercus Virginia Live Oak, more commonly known as “Grandma’s Oak”.  With a circumference of 338 inches, a height of 61 feet, a crown spread of 114 feet and estimated to be over 500 years old, it is in the Big Tree Registry (who knew?) as a Texas Champion.

The site where it stands is historical in that it was first settled by Stephen F. Austin’s “Old Three Hundred” in 1821 on the site of Montezuma’s Indian Village. 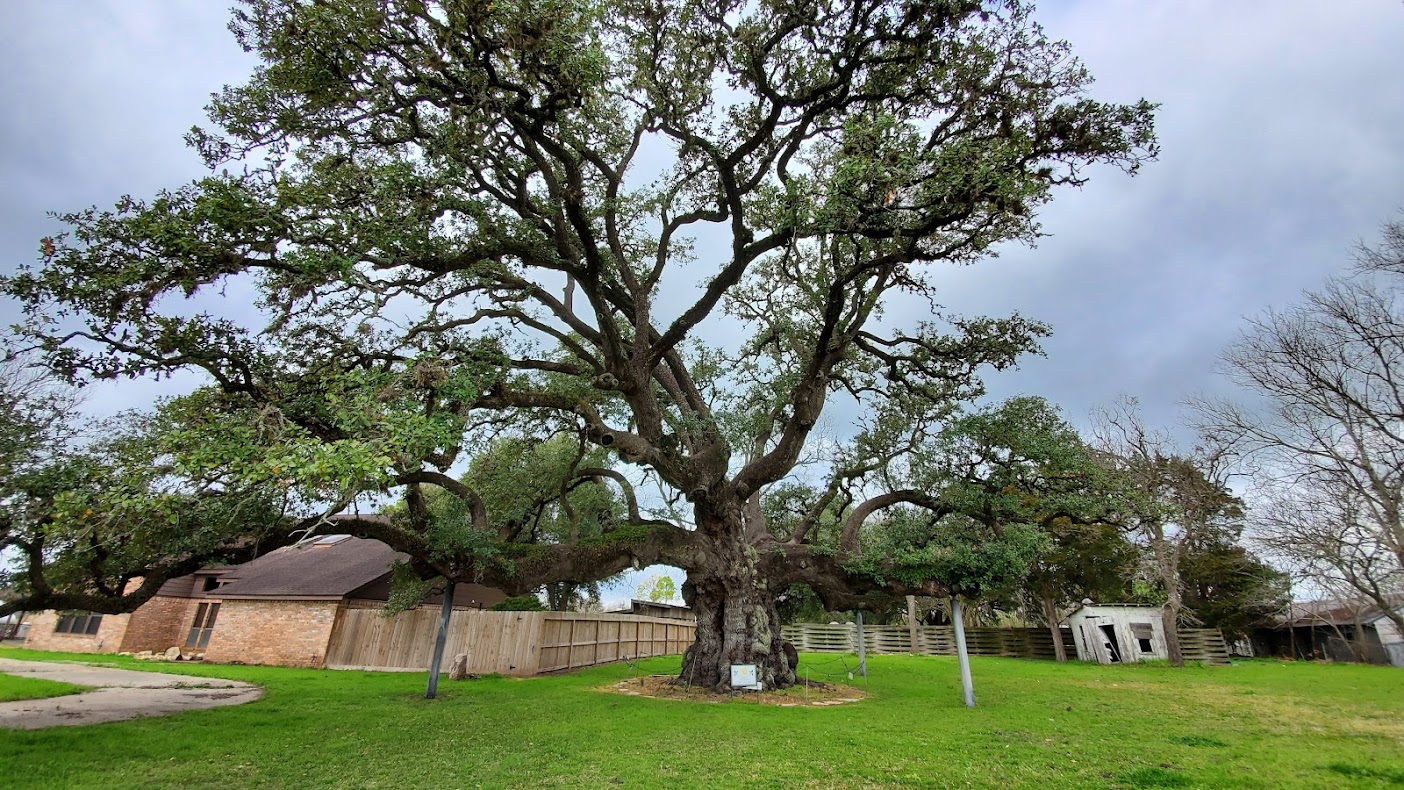 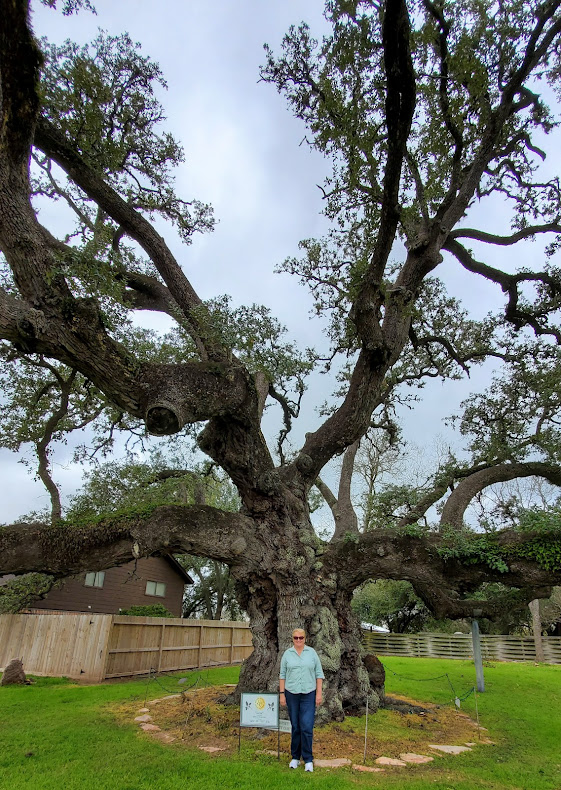 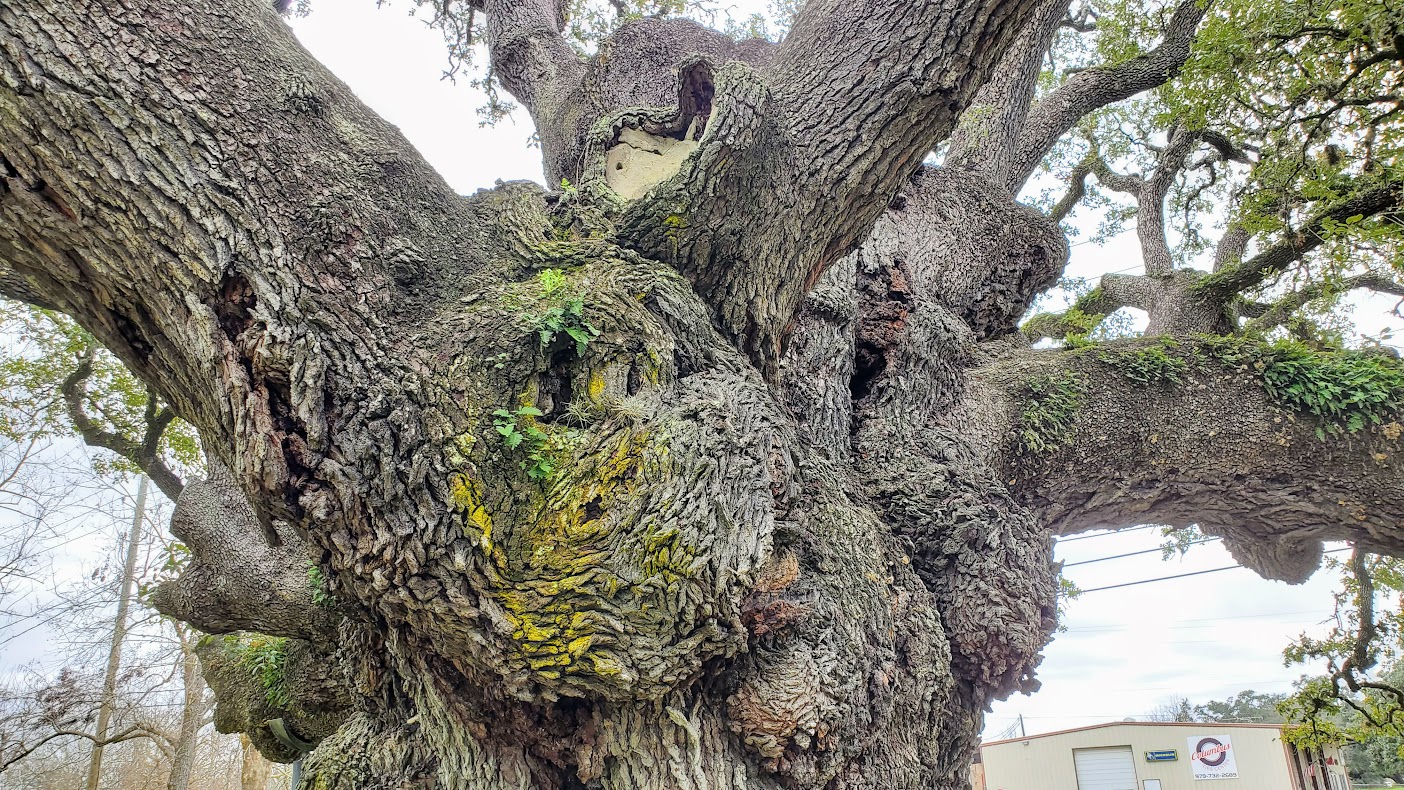 To ensure that it lasts another 500 years, it has three steel poles helping to bear the weight of its larger branches. Yes, I guess it proves what they say “everything is bigger in Texas”. 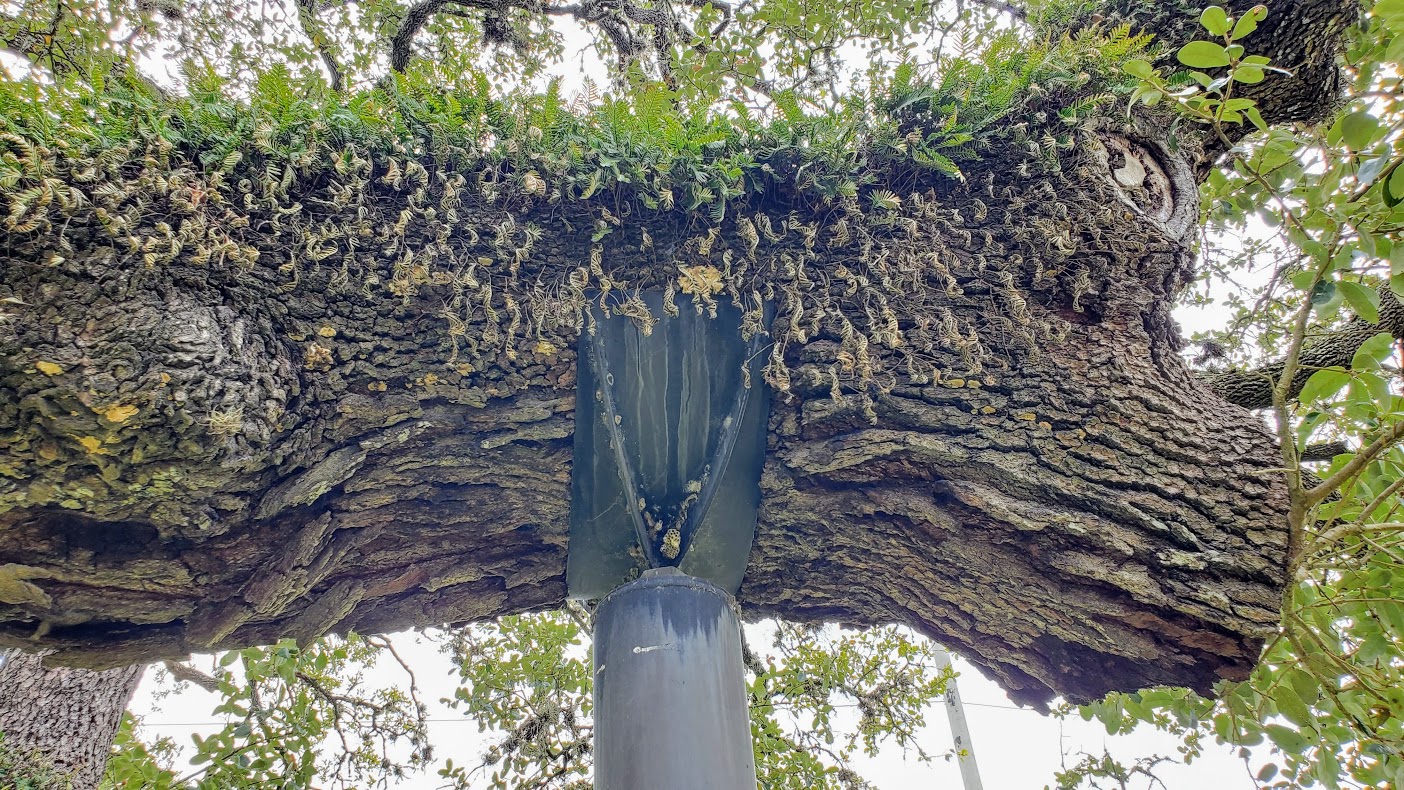 Next on our itinerary for the day was a 35 minute drive to the small German community of High Hill (near Schulenberg) where St. Mary’s Catholic Church, one of twenty painted churches found across Texas, is located. 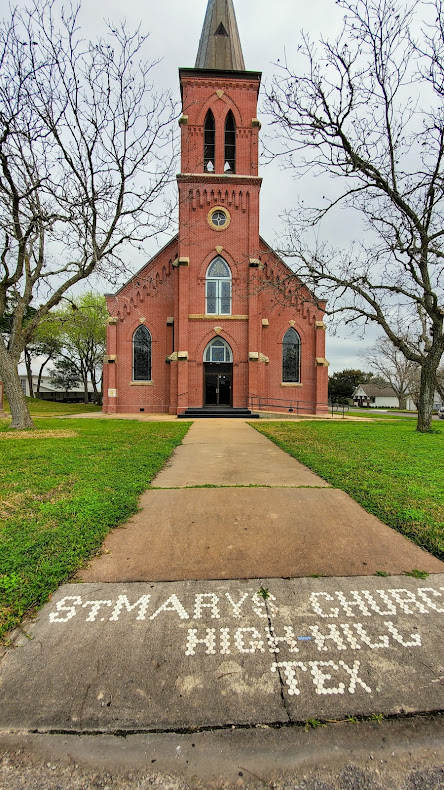 What’s the history of the church? Around the 1840’s, German emigrants seeking religious freedom and economic prosperity, arrived in Texas and established several small settlements in the area. The communities quickly grew so by 1869 there were six stores, three blacksmith and wheelwright shops, a post office, a hotel, and a brewery (what, only one brewery?). 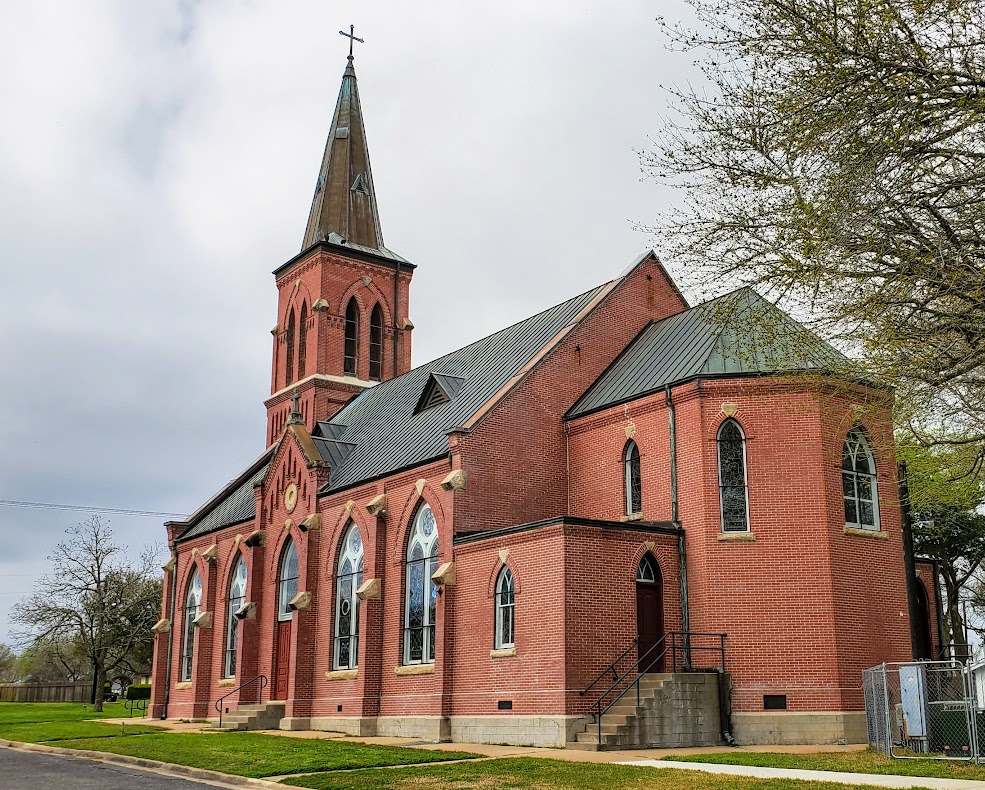 Pulling into the parking lot, it certainly didn’t look like anything special, looked like every other brick church we’ve seen but boy, did our opinion change! Once inside it was easy to understand why this particular church is considered the “Queen of the Painted Churches”!

In the vestibule, dramatic Gothic script-style, gilded letters of Psalm 47:10 verses were stenciled on opposite walls along with decorative patterning. 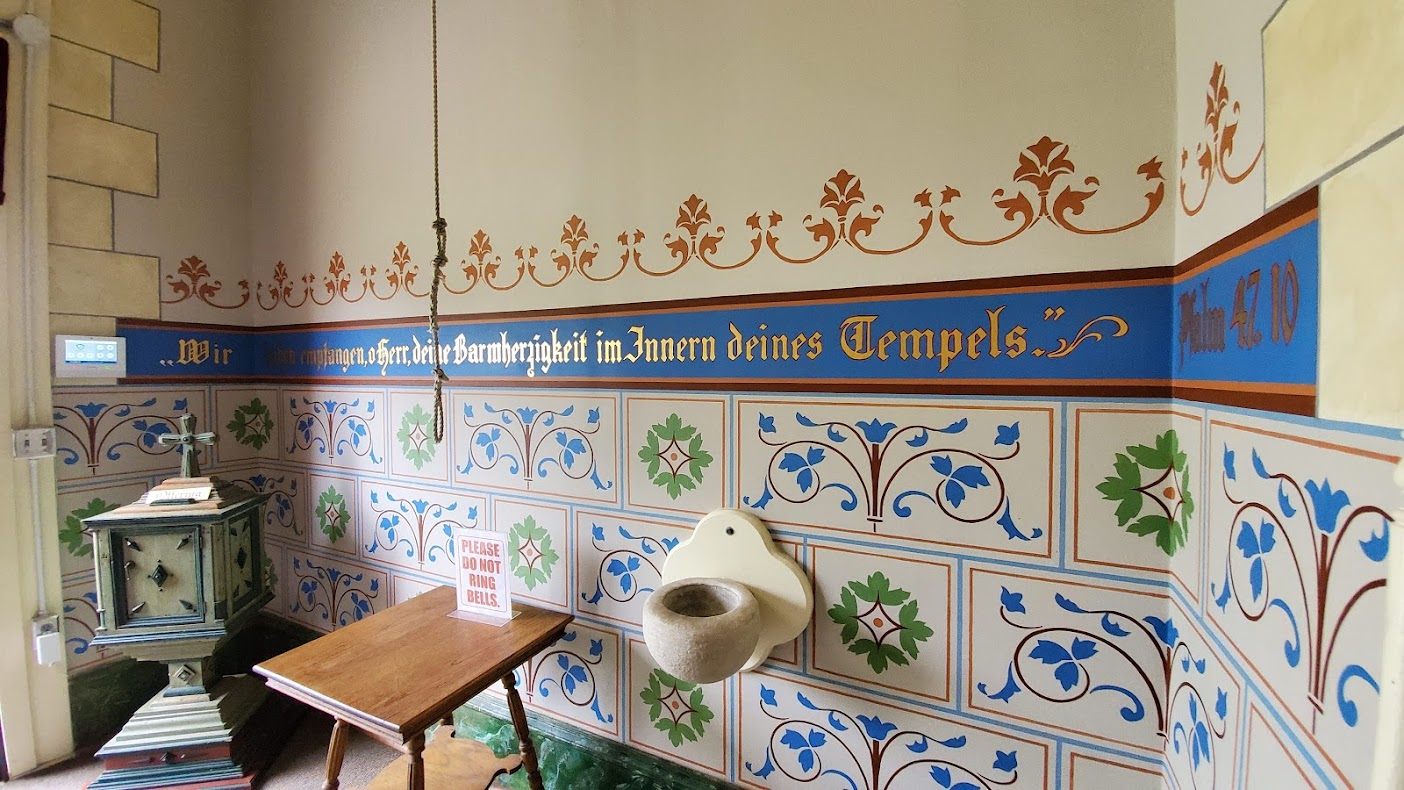 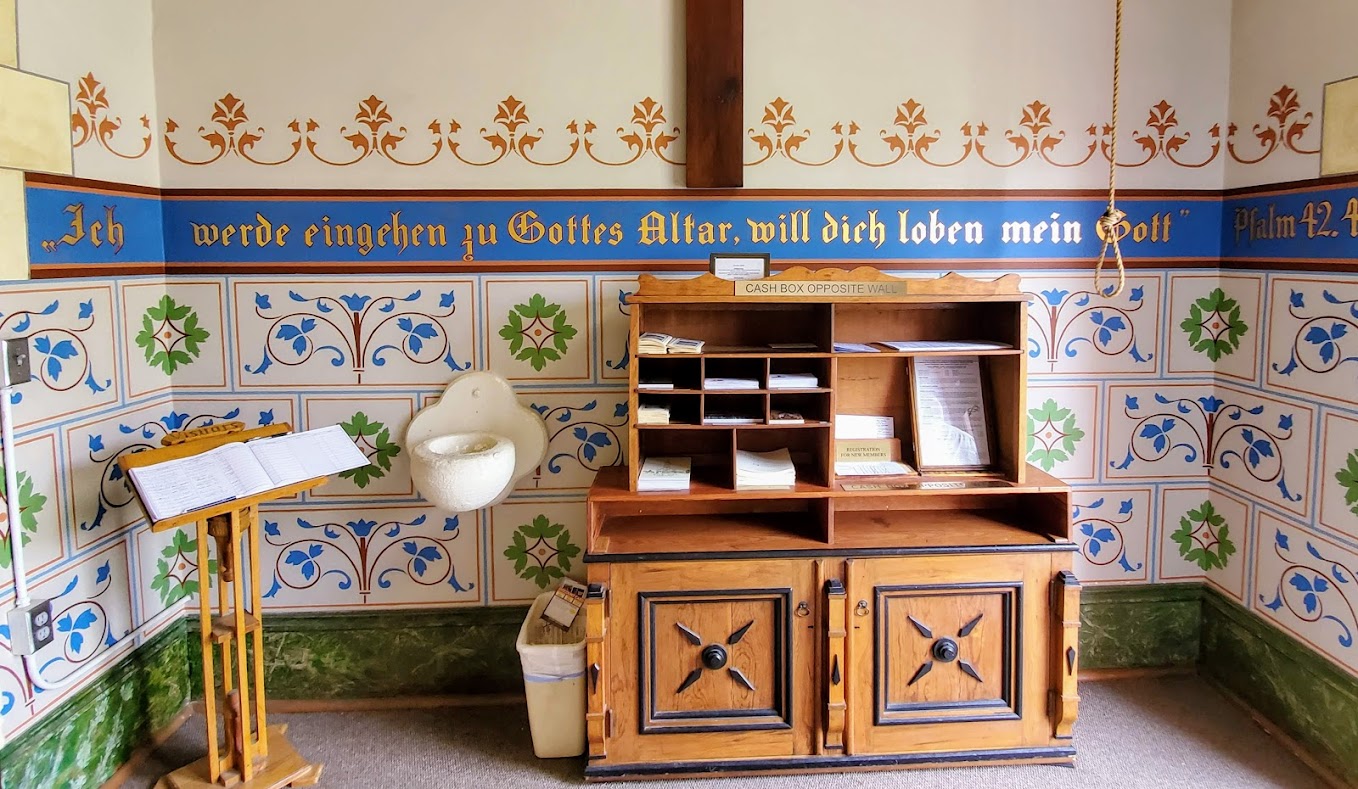 Opening the swinging doors, as we stepped onto the plush, red carpet of the sanctuary, or nave, we gasped.  Then stood silent and still for a few seconds while we tried to absorb the breathtaking sight in front of us. 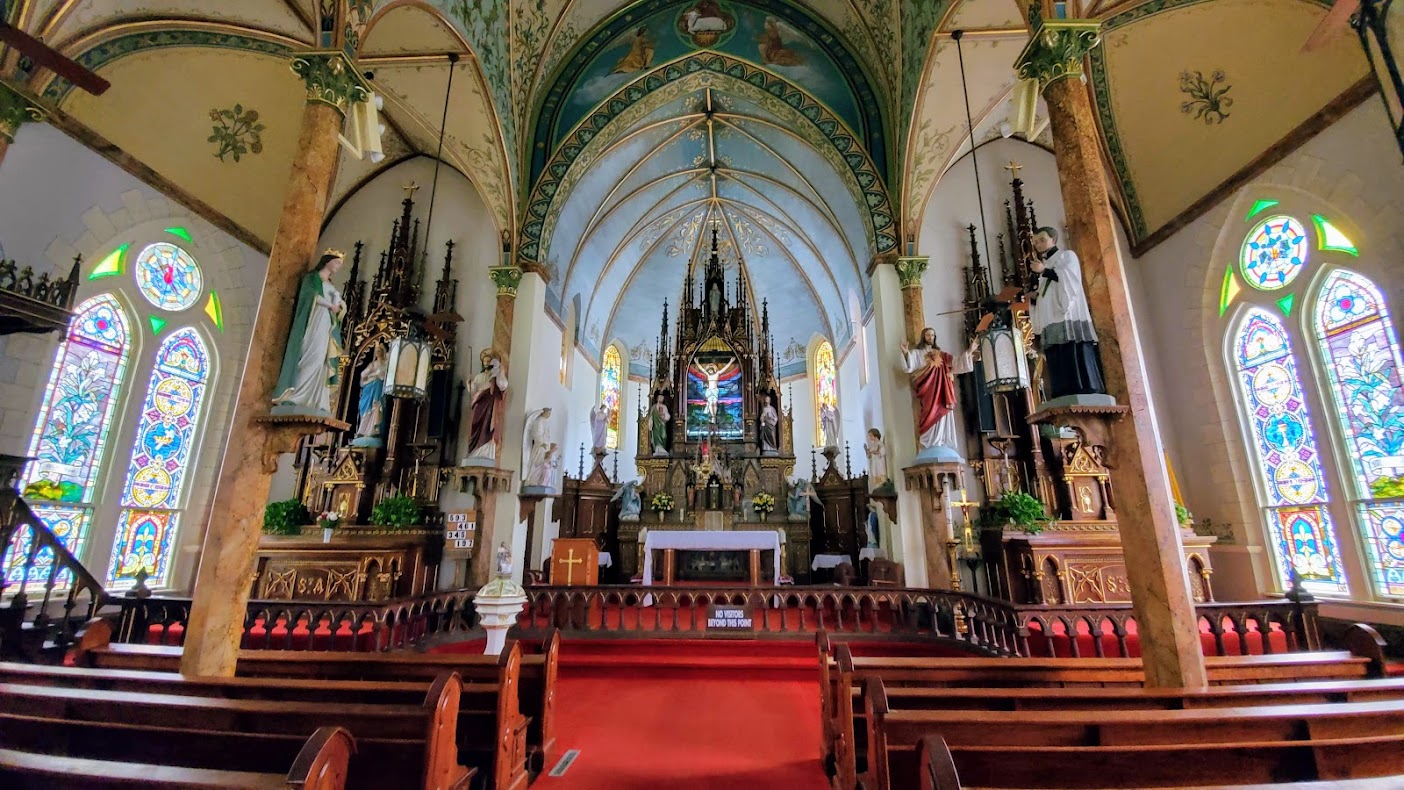 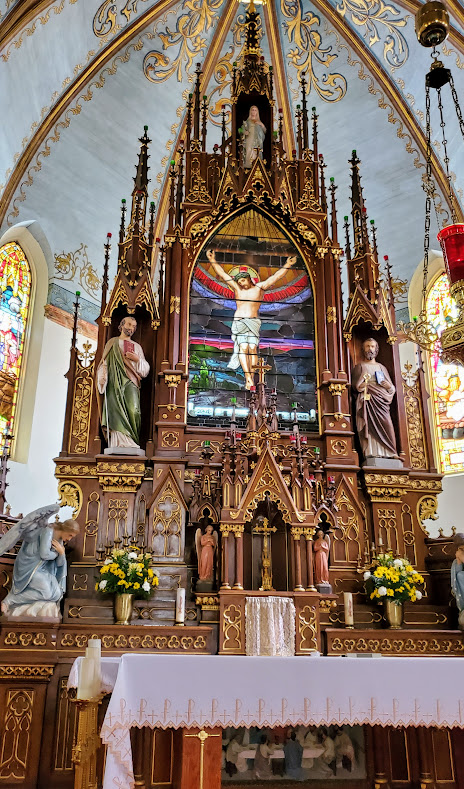 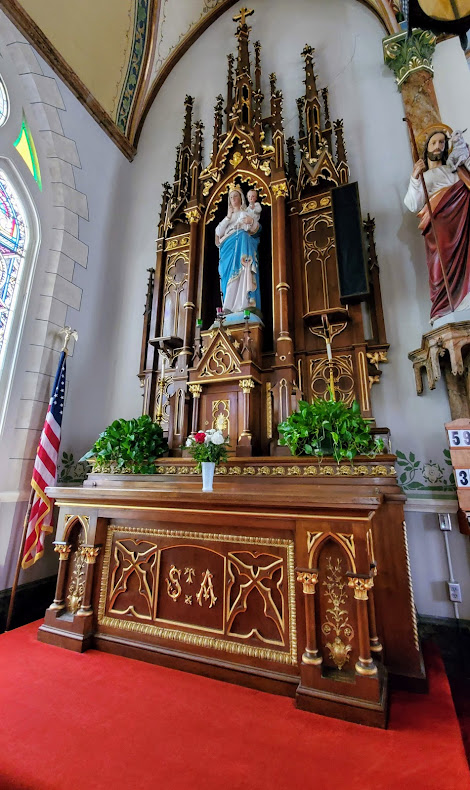 It was interesting to learn after the fact that the light blue wash and scrollwork that contribute to the majesty of the sanctuary are not actually painted on the ceiling. Instead, the painting was done on canvas that was attached to the church’s wood ceiling, almost like a wallpaper. A faux marble finish on the columns also adds another interesting visual element.

In 2011, the church was meticulously restored which took nearly 12 months with a crew of up to nine individuals working 40 to 60 hour weeks. It included repairing canvas surfaces, repairing plaster, and fully restoring painted surfaces. 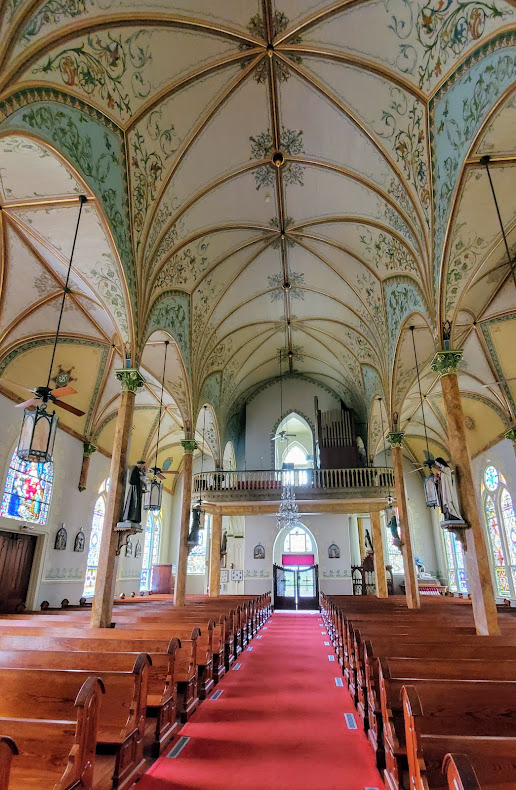 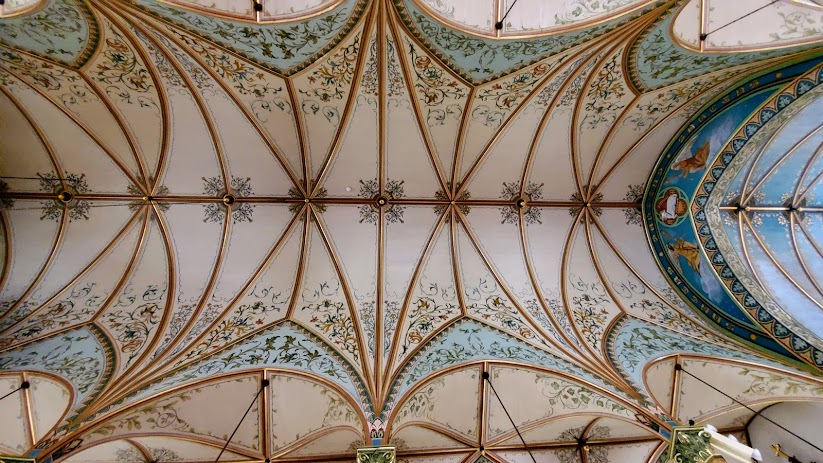 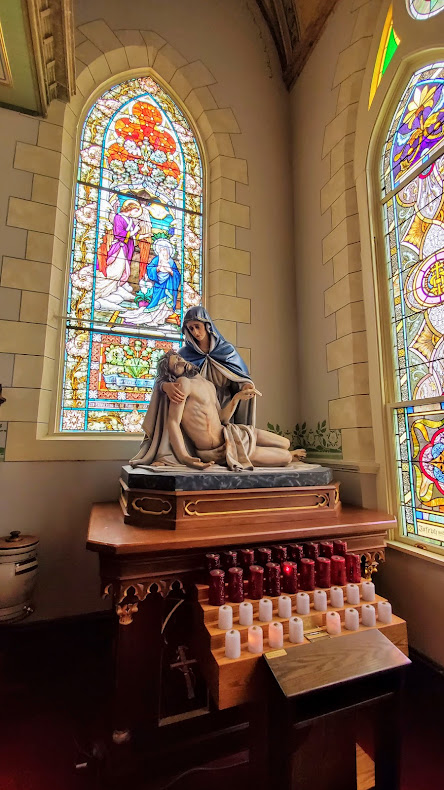 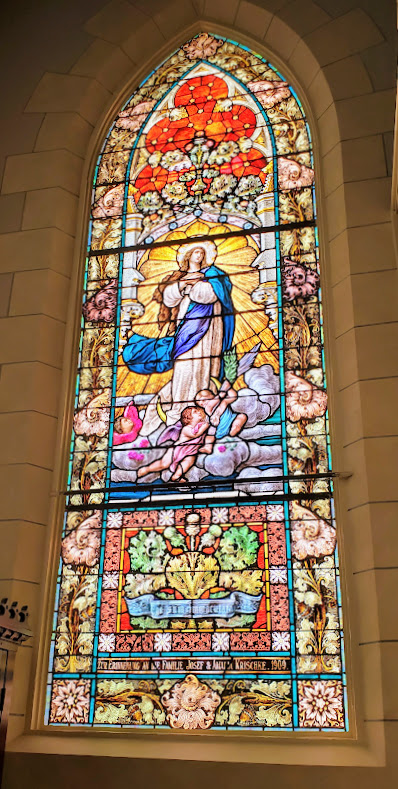 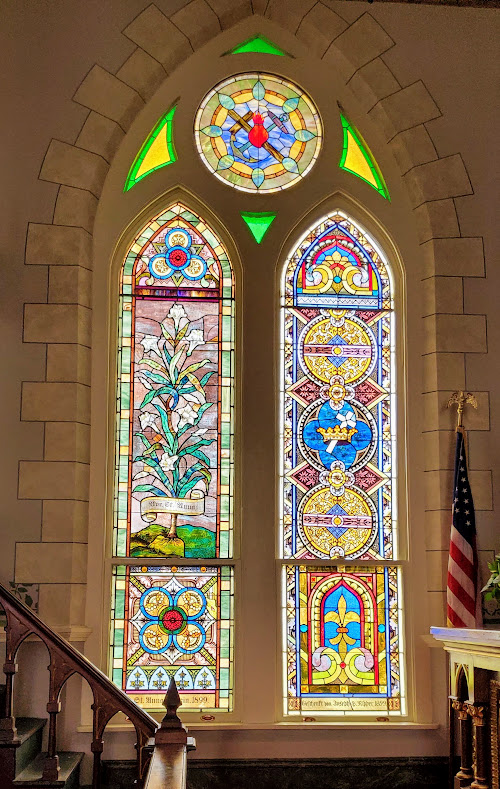 After we were finished “oohing” and “aahing” inside the church, we wandered around the immaculately manicured lawns outside. 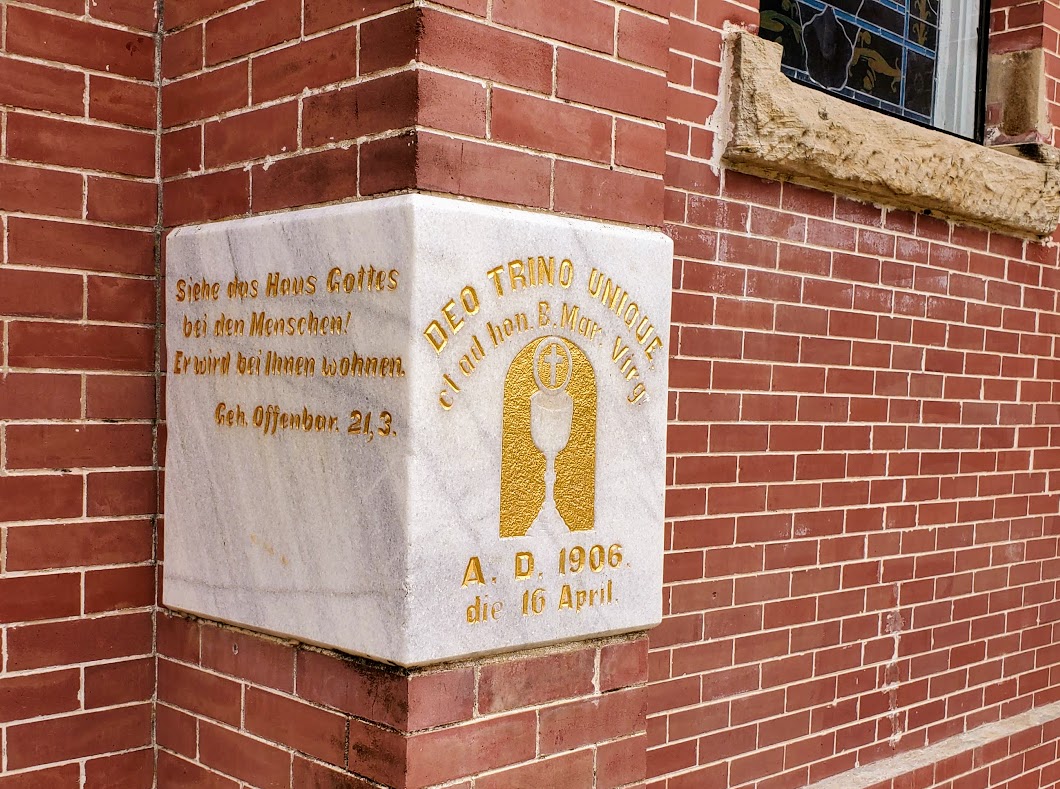 Being an active church, masses are held on Saturdays at 6:30 p.m. and Wednesday mornings at 7:00 a.m. so they ask that visitors be respectful of any events or services that are happening. Otherwise the church is open to visitors. The Schulenberg Chamber of Commerce (closed now due to Covid-19) offers Tours of the Painted Churches for $25.

Although it was only a two night stay, it gave us an opportunity to learn a lot about the history of the area. But even though we were leaving, our journey in Texas wasn’t over yet! Maybe we’ll have a chance to visit another painted church during the rest of our stay in Texas! More to come….