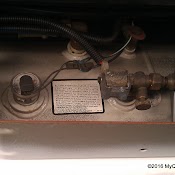 So today I decided I’d better check out all the propane appliances on the Discovery since the weather is getting colder and the two roof mounted reverse cycle heat pumps(AC units in warm weather) soon may not be able to keep up. We can also heat with two much more powerful propane furnaces, plus the water heater & refrigerator can run on either propane or electric. Propane is also used for the cooktop.

We do winterize the coach but around mid-December we will be firing everything up to prepare for our trip south – better to check all systems while it is still reasonably warm. 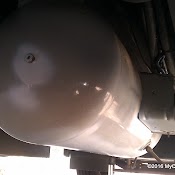 propane tank itself on this coach is mounted just forward of amidship and just aft of the diesel tank, centered between the chassis rails. The propane fill port, overflow and “Emergency Shutoff” switch are remotely located in the aftmost driver side luggage compartment for easy access. The “Emergency Shutoff” switch electrically activates a solenoid valve mounted at the tank – we use it when driving thru tunnels or other restricted areas but it is normally left on.

So I had turned the solenoid off over the summer just in case there was a leak or whatever, but when I went to turn it on I couldn’t hear the telltale click of the solenoid. Well, no problem I thought, this switch is not in a sealed off area and is somewhat exposed to road grime and has been an issue before so maybe it just futzed out. Checked the voltage on the input; +13.6v. OK good, so I just jumpered the two switch contacts – uh oh still no solenoid click. Hmm, I know the fuse is good because I have voltage, so WTF? 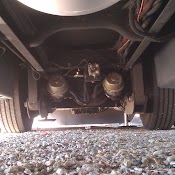 Started to trace the wire and that immediately disappeared into a massive bundle of other wires all shrouded in their split loom cocoons – not traceable from this end. OK, lets check the propane tank end. Of course the 40 gallon tank is suspended in the middle of the chassis underbelly between the rails so that meant crawling under the rig – well at least it’s out of the rain!

Started poking around and was able to pull out a few inches of the wire as it ran from the solenoid mounted to the side of the propane tank up onto the chassis rail. Initially I figured I would find nothing as it also probably disappeared into an even more massive bundle of wires, air lines and who knows what and was starting to consider that maybe the solenoid had failed. BUT, whoa! Is that bare copper I see? Yes it was! The sheathed two conductor cable from the solenoid was basically cracked open in 3 or 4 places. Looks like it might have been mashed somehow.

But how the heck did that happen? It was very protected from any road debris and anything that could have done that to the wire would have done something just as nasty to one of the  air lines it was tie wrapped to. I didn’t see any teeth marks so ruled out a rodent dinner. We were only on the road once since the last time I used this switch and that was just a trip to the dealer to have the Norcold refrigerator recall performed. I just have to assume at this point that the broken wiring was like that from day one and the elements finally took their toll.

So about two minutes with the wire strippers and a couple of heat shrink butt splices later it was all fixed up. I tested by shorting the switch terminal together and woohoo!, there goes the solenoid! I added some additional split loom for protection just in case. 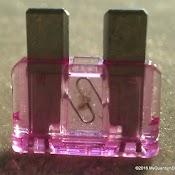 Ah, but wait there’s more! I had removed the switch for testing and as I go to re-thread the wires for the switch back thru the mounting hole, guess what? Yep, I hit the chassis with the +12v wire and blow the fuse. Fuse? Hmmm. Where is the fuse? Well that’s a good question! Looked at the three fuse panels inside the coach – found a blown 20A “Condenser Fan” fuse under the dash – OK that’s a weird circuit for it to be on but that must be it, right? Wrong (guess that will initiate another investigative project at some point).

So OK where else are there fuses? Crawled under the coach again and looked for an inline fuse somewhere but no luck. Got out my schematics from Fleetwood and couldn’t find any references to a propane solenoid circuit. Finally I remembered there is a battery switch box inside the inverter compartment – let me look in there. I always thought this was just the heavy battery switching, but I pulled the cover and there were about 20 or so assorted ATC fuses, a couple of solenoids, a few breakers, etc. as well as several bundles of wires (which are all inconveniently blocking access to the fuses of course). 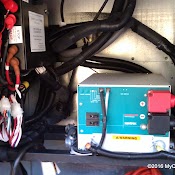 By now it is now about 35 degrees, raining and access to this box which is in one of the luggage compartments requires a great degree of contortionistic flexibility of which I am currently in short supply. I did find some documentation on the box cover and there were two fuse labels that looked hopeful; a 3A “LP DET” and another 3A “LP DET COACH”. LP is what I’m looking for but “DET” is probably referring to “detector” – well we only have one detector that I know of so it’s worth a check. Got out the voltmeter, grounded one lead, and proceeded to probe the exposed contacts on the top of the fuses (ATC style), first one side then the other – I should see 13.5v on both sides of a good fuse. 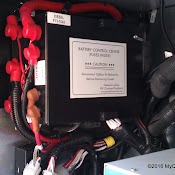 Sure enough on F15 “LP DET COACH” I only got a reading on one side – could this be it? Managed to pull it out and yes it was blown. Despite my now near frozen fingers I managed to put in a new one and woohoo! Solenoid now working again!

This time I was a little less boneheaded and prior to replacing the fuse I had pre-pulled the switch wires thru the mounting hole to avoid another short. Just hooked up the wires to the switch snapped it back into place and done! Only 3 hours wasted today!

Well, on the bright side, I now now where the manual shutoff valve for the propane tank is located (same place as the solenoid), where the propane solenoid fuse is and that I need to keep an eye on the “Condenser Fan” circuit (I think this has to do with the engine AC equipment).