According to Wikipedia, “the Grand Strand refers to a large stretch of beaches extending from Little River to Georgetown in the U.S. State of South Carolina. The Grand Strand has become a major tourist

attraction along the Southeastern coast, with its primary city, Myrtle Beach, attracting over ten million visitors each season. It is home to numerous restaurants and theme parks, making it popular with families and college students in the summer and Snowbirds during the winter.”

Tuesday we were up bright and early ready to begin our first day exploring the area.  It was a bright, sunny day and the forecast called for temps  to be in the high 60’s.  Woohoo! So the first order of business was breakfast.  Now those of you who have followed our blog since the beginning of time know that

breakfast is Rob’s favorite meal (me, well, not so much).

On our drive down, we saw a number of Waffle House restaurants so what was our first order of business – yep, you guessed it – breakfast at a nearby Waffle House. As we walked in the door, everyone who worked there shouted out a cheery “good morning” – ah yes, you just can’t be the friendliness down south!

After our hearty breakfast, we headed towards Myrtle Beach with it’s many hotels and restaurants where we eventually parked and

took a walk along the boardwalk.  Apparently the new 1.2 mile long boardwalk and promenade was completed in 2010.  And according to the Myrtle Beach Boardwalk website,  it took nine months and nearly $6.5 million to build and is comprised of nearly 800,000 feet of lumber, around 300,000 nails, 555,000 screws and 10,000 bolts to complete the project! The end result is quite impressive!

Along the Boardwalk in a section known as Plyler Park is Skyview, a majestic 187 foot ferris

people. It is the tallest ferris wheel east of the Mississippi and operates between 11 am and 8 pm daily.  Cost for the 3 revolution, 10 minute ride is $13. Not being a big ride fanatic, yours truly opted to keep my feet planted on the ground and just look up at it. After strolling along the boardwalk and taking a lot of pictures (below) for about an hour, we decided it was time to move on.

The couple we met while we were maneuvering the coach into our site told us about the Market Common which is advertised as a 114 acre lifestyle center with town homes, shops, restaurants.

Tom is retired from the Air Force and a Vietnam War vet so he was telling us that this area used to be an Air Force Base which closed back in 1993 and was recently developed into the Market Common.

Since we had to go right by it on our way back to the State Park we took a ride through. One of the first things you see when driving down the street is War Bird Park where an F-100D, A-7D and a

n A-10A are on display along with a  Wall of Honor to those Airmen who were assigned to the base, with many names inscribed on the wall.

Market Common is quite a nice shopping complex with m

any well known stores (William Sonoma, Chicos, Victoria’s Secret, etc.) as well as lesser known smaller boutiques and many restaurants. Ah, if only I liked to shop!

In the morning, we had a debate about whether we wanted to stay at the State Park beyond Wednesday (our site #207 was booked 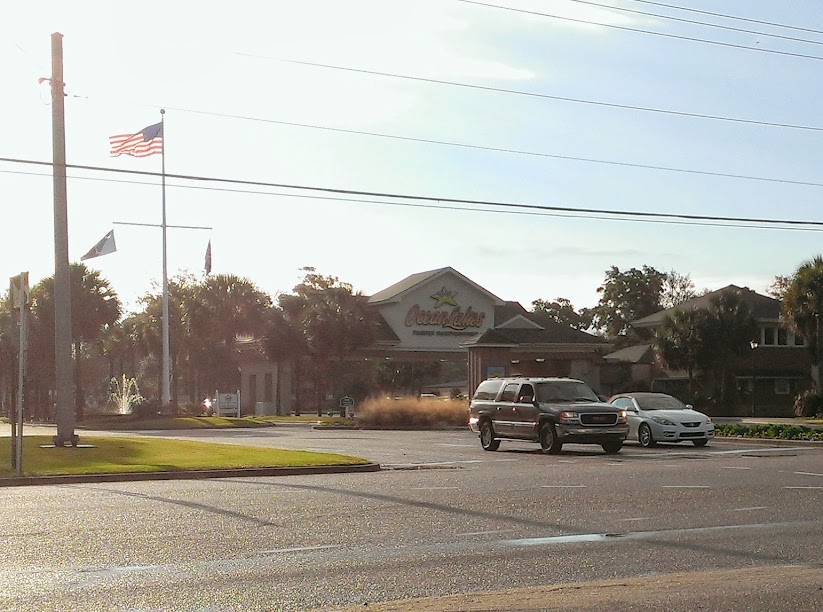 Along South King’s Highway, there are several huge campgrounds. Before we left for Myrtle Beach, we almost made reservations at Ocean Lakes Family Campground (over 800 campsites) but after seeing it in person we’re so glad we didn’t! We also stopped at Lakewood (2000 campsites) and Pirateland. We weren’t

impressed with any of them. Row upon row of sites with not a lot of room or privacy on either side, fairly short sites (even those designated as big rig friendly) and not a lot of shade.  Each said

that some of the sites had ocean views, but the dunes at the head of the beach effectively blocked all views unless maybe you were up on your RV roof. They must be very popular especially in the summer months but they just didn’t appeal to us. We preferred the woodsy atmosphere of the less costly State Park which is a literal oasis of nature surrounded by the glitz and klitch that is the typical Myrtle Beach.

Once back inside the State Park,  we parked and walked through the gift shop and onto the fish pier.

What a beautiful day! Even though it was fairly warm (at least to

us New Englanders), there weren’t many people on the beach. We sat on the pier for a bit then walked on the beach.   I’ll let the photos below do the talking!

After that it was back to the ranch.  That morning, we had checked on-line to see if the site next to us (site #209) was

available since the people who were there when we arrived had left so we decided to stop at the office and reserve that site from Thursday to the following Tuesday morning, November 19th.  We were told we could move at any point in time but we decided to just wait until Thursday morning.

Site #210 was occupied by a 34′ motor home. We ended up meeting the two men, Rob and Claude, who were from Halifax, Nova Scotia and their very well behaved 2 year old black lab, Minnow.  Rob who is retired is taking his motor home to FL for 8 months where eventually his wife, a heart surgeon, will fly down to join him.  Claude, who used to be a semi-professional hockey player until an

ended his dreams, is along to help him with the driving and to provide companionship and will eventually fly back to Halifax where his wife and kids live. Super nice guys!  Since they were here until Sunday, the 17th, we had many interesting conversations with them about their health care system, their views of Americans (all favorable) and their lives back in Nova Scotia. We now have a standing invite to stay on their property if we ever travel to NS!

After writing about the day, it seems so busy but it really wasn’t. It was such a nice night that we couldn’t let the day end without having our first campfire and a gourmet meal of franks roasted over the fire and potato salad.  Yes, life is good!