For those of you who might be jealous of us in the warm temps, not to worry!  By Tuesday night, November 12th, the arctic cold front that hit the eastern seaboard swept into Myrtle Beach.  Frost advisories had been issued for the area that night.

On Wednesday, when we awoke, the temp was a mere 30 degrees and we heard on the news that with the winds, the wind chill in Boston was 16 degrees and Myrtle Beach was 18 degrees.  Go figure! We could expect the 30 degree temps at night over the next few days. And the daytime temps were not going to reach much above 50 degrees.  Darn, I had moved my

heavier jacket and sweats to the back of the closet…guess that was a little premature!  Well, at least I didn’t totally pack them away yet.

Even with the cooler temps, we found things to do on Wednesday and Thursday.  Good time to run a few errands and make the  usual stop at the local WalMart to pick

up various bits and pieces followed by a trip to O’Reilly’s Auto Parts for some stuff Rob needed for the bus and Petco (more about our purchase there later). So exciting!  By the time we got back, it had warmed up slightly so we hopped on our bikes and rode down to the beach.

Not much more to write about – our week was spent trying to get caught up on our blog posts, taking long walks on the beach, riding our bikes, and visiting with our neighbors. Rob spent some time working

on the dash cam that he had bought, fixed a slight leak in the cooling system (loose clamp), topped off the coolant with Final Charge as specified by Cummins, added some more DEF to the emissions system (which we normally buy at Walmart but the local store didn’t stock it), added stabilizers (big improvement) to the drop hitch and tow bar connections and several other small projects (does the list ever end??).

We did manage to try a few more breakfast joints. On Thursday, we went to Mammie’s Kitchen for breakfast. We had seen a local TV report that touted it as one of the top 5 breakfast places in

Myrtle Beach so we decided to give it a try.   They had a breakfast buffet for $7.99 which is a good price for the area. It included fresh fruit, scrambled eggs, bacon,

sausage, hash, biscuits and gravy, grits, several types of home fries and numerous sweet items.  It was good and definitely filling but not sure if we would rush back – buffet food is almost never as good as fresh cooked. BTW on this day they were also offering a made to order special of two eggs, potatoes, toast and meat for $4.99 which is also a good price for this neighborhood.

Because we extended our stay and state parks work off a site specific online reservation system, on Thursday we had to move one site over from #207 to site #209.

Moving is kind of a pain – if only we could leave out the slides and not have to unhook everything but unfortunately that isn’t possible.  And of course as soon as the kitties heard the hoses being reeled in, it was time to panic!  Off they went into hiding. They just wouldn’t listen to me when I told them not to panic – that it would be over in 5 minutes! Since site #209 had fewer trees, had a steeper angle to the road and we had more eyes (Claude and Rob from NS), it was easy peasy.

And then, on Saturday, the 16th, we went to the Eggs Up Grill “where good food and smiles are served up everyday”. Cute 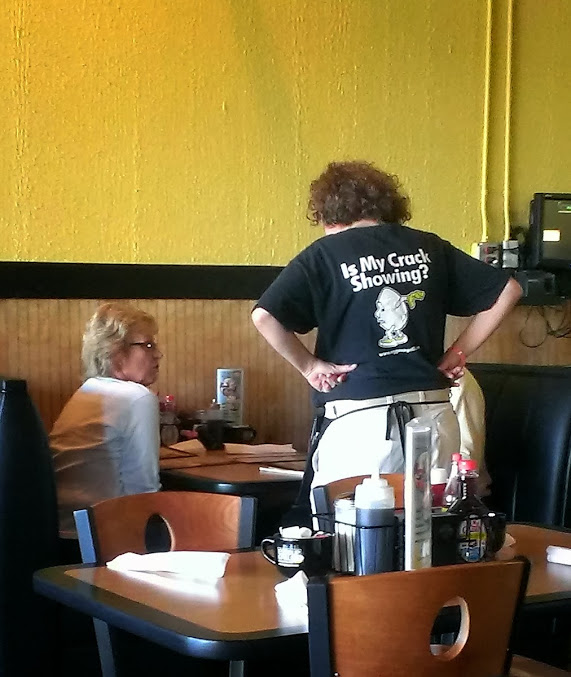 place!  Good service and good food! And I love their t-shirts!

Rob tried their home made corned beef hash which was excellent and I had the eggs & bacon, home fries and toast.

On Sunday, we had to say goodbye to Claude, Rob and Minnow who were off to points further south.   They are not sure where in FL they are heading but they seemed interested in heading over to the Homosassa area and

After they left, Rob spent the rest of the day putting our tripod mounted satellite Dish together and trying to get it to work.  With all the trees our roof mounted Dish had a tough time picking up any satellites.  Funny we managed to get a satellite signal on site #207 but when we

moved to #209, we couldn’t get anything so he figured with the portable one he might be able to point it at a hole in the trees.  I was already whining about the fact that the Pats/Panthers game on Monday night was on ESPN and without the DISH working we wouldn’t be able to watch it. Boo hoo!

The campground was fairly busy over the weekend but as of Sunday afternoon we were here almost all by ourselves.  Weather wasn’t great, it showered most of the day but that’s okay. There’s something about the sound of rain on the roof of a motor home that is very soothing.  Plus it gave me the opportunity to clean house. Oh joy!

And then there was good news by late Sunday afternoon, we picked up a satellite!  Woo hoo!  There is a sports god after all! Whoops wait a minute, the sports gods weren’t working in our favor – the Pats played well but lost to the Carolina Panthers. Lot of controversy over the last play of the game.  Oh well, as Rob always tells me, it’s just a game! There’s always next week!

On Monday, we went for our last walk around the campground, taking one of the loops that goes by the six cabins.  Look pretty nice with just a short walk to the beach.  Then that night we took another drive to the Boardwalk.  I had read that every night there is a light show at the SkyWheel so we wanted to check that out.  I expected the Boardwalk to be 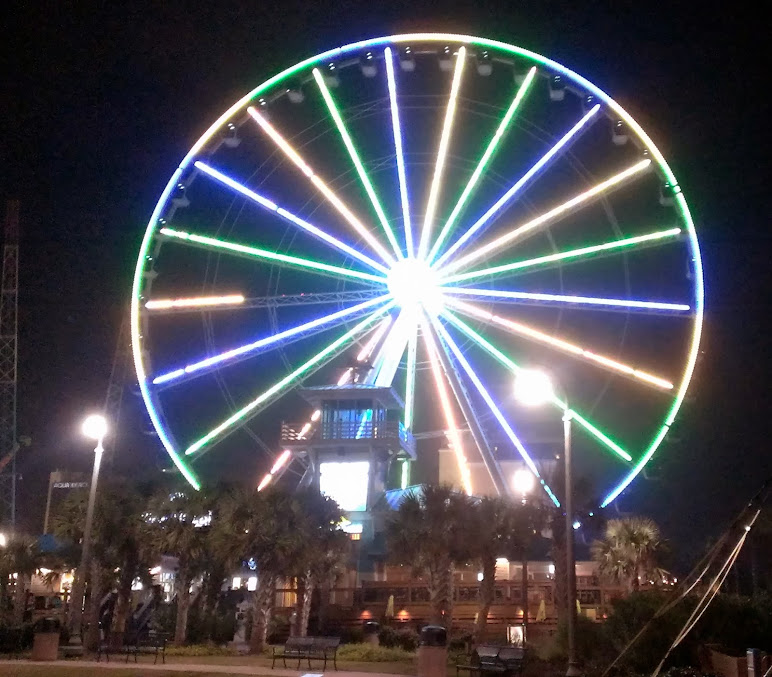 busy but we were the only ones there which was a little spooky!  We watched the lights for a few minutes then left to head back to the ranch.

During several conversations with other campers, people were raving about the Myrtle Beach Opry Christmas Show.  It was tempting but at $50 per ticket plus we were in the “but it isn’t even Thanksgiving” mode, so it just seemed to early for a Christmas show and decided not to go.

On Tuesday morning, November 19th, we headed for our next destination.  Stay tuned!

To see more photos of our visit, click here.