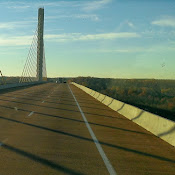 On Monday, November 11th, with another long 6 hour day of driving ahead of us we hit the road early again, pulling out of Americamps by 7:15 a.m.  headed for Myrtle Beach State Park.

Most of this drive would be on I-95 which once you get south of DC is a relatively easy drive for the driver, but as a passenger I know from past experience, it would be a long pretty boring day.  Oh well, this would be our last very long driving day for awhile and once we got to our 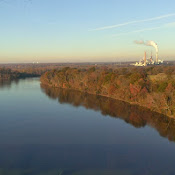 destination we could look forward to staying there for a bit. So guess I better stop whining about the boring highway!

We drove for awhile, then pulled into a rest area to have a quick breakfast of cereal and one of those yummy apple cider 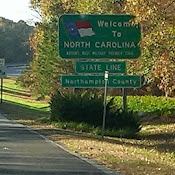 doughnuts we bought at Bowman Orchards near Albany.  Once we were on the road again, the drive was pretty uneventful.  After about 2 hours, we crossed the state line into North Carolina, passing close by to the exit for the Carolina Crossroads campground in Roanoke Rapids – that’s the campground we would have preferred to stay vs. Americamps.

When driving Rob uses the built-in RV GPS (currently Rand McNally with RV routing) as well as Google Maps on his Android smartphone because he isn’t totally trusting of the routing advice of any device and having two going will prompt us to stop and investigate disagreements in the suggested route.  In most cases, the two agree, however, the Rand McNally is supposed to route us optimally based on length, height, weight, etc. You would assume that for our size rig that would mean keeping to the interstate and other primary roads even if those routes required a few more miles.

Well Rob’s not too impressed with Mrs. Rand McNally! He decided to trust her over Mrs. Google based on the alleged preferred RV routing. Well no more! Instead of having us continue on I-95 and picking up a more suitable secondary route into Myrtle Beach for our size, she decided to take us on a convoluted route of back roads. Jeesh!  For me, it was a lot more interesting than I-95 but for Rob, the drive was annoying to say the least. Ironically, non RV aware Mrs. Google had been suggesting all along what would have been a more appropriate route.

This incident coupled with several other anomalies with the Rand McNally (TND 720 equivalent) has Rob ready to replace it (the words he used were much more graphic BTW). Unfortunately it is built into the dash and is part of a multifunction product (DVD, XM, FM, AM, iPod, USB, etc.) which is otherwise a very nice unit. The Rand McNally software is on an SD card however, and can be replaced with the original Riverpark GPS software, however, that does not have RV specific routing or free updates.

Rob’s favorite GPS products are made by Garmin – having used them for decades he feels that Garmin has fine tuned their “route engine” (software that figures out the routing) to a level most other products (and we’ve tried many) can’t match. So a product from the Garmin DEZL line may be in our future (oh boy a third 7″ screen to distract him)! He may try the CoPilot GPS software for his smart phone or one of our tablets again but past experience had turned up several serious route engine flaws with that product as well. 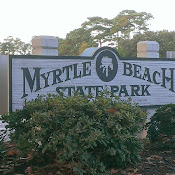 areas, a fishing pier and a nature center.  The campground has approximately 300 sites but only 54 of them have full water, 50A electric and sewer hookups. Most have electric and water only.

When we made the reservation through the South Carolina Park system,  the picture of site #207 (a 50′ back in site with full hookups) 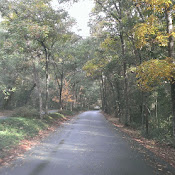 looked promising so we reserved it but it was only available until Thursday, November 14th.  At the time we weren’t exactly sure how long we wanted to stay in Myrtle Beach so that was okay.

After checking in, we made our way to our very heavily wooded site #207.  Oh, oh, this was going to be interesting especially since this was the first back in site of the trip and we were a little out of practice.

OK, more like I was a little out of practice – I’m usually standing in the wrong spot so Rob can’t see me or my arms are 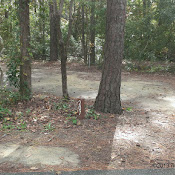 flailing around uselessly as I try to tell him which direction to turn! There were trees on either side of the site, trees across the road from the site, actually there were trees everywhere so there wouldn’t be much wiggle 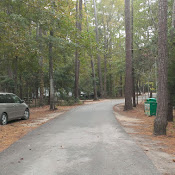 room for an easy back in. But after several maneuvers, Rob had the coach right where he wanted it!  A couple (Tom and Elsa) on their bikes had stopped to watch the show so we enjoyed chatting with them for a bit. 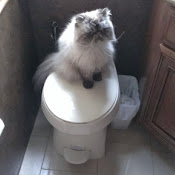 Since it was fairly late in the day by the time everything was hooked up, the slides were put out and the kitties were coerced out of hiding, we didn’t have any time to do any exploring so we basically settled in for a quiet night.

Stay tuned for more on our stay here!