With the discovery of “white gold” (Borax) in what is ironically called the Greenland section of Death Valley (formerly known as Furnace Creek Ranch) in 1881, the history of the area was changed forever and fostered in the opening of Death Valley to commercial ventures. Prior to that time, America had to import borate from China and Turkey to meet the high demand for its use in the making of glass, ceramics, soaps and detergents. For those who are confused by the difference between Borax, boron and borate, it is explained on the Borax website.

Information about borax mining was presented at the Furnace Creek Visitor Center piquing our curiosity, so visits to the Borax Museum at The Ranch At Death Valley and the Harmony Borax Works, both located just a short distance from the Furnace Creek Campground, were quickly added to our plans.

Borax Museum at The Ranch At Death Valley 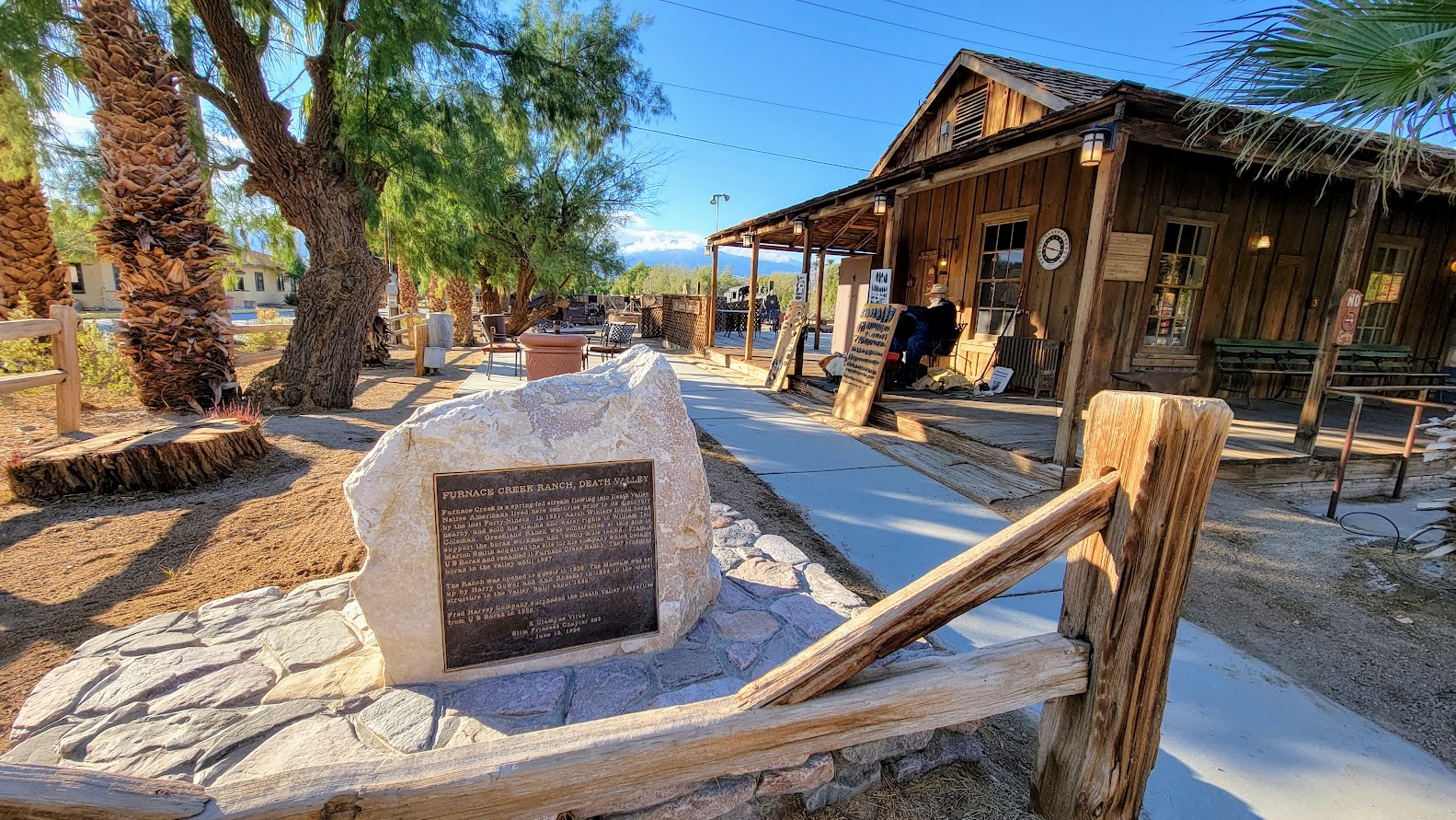 The Borax Museum (free) is partially housed inside the oldest structure in the national park which was built in 1883 by FM ‘Borax’ Smith, founder of the Pacific Coast Borax Company. Originally it stood in Twenty Mule Team Canyon (which we visited but more about that in a separate post) serving, according to a historical marker on the building, as “an office, a bunk house, and an ore checking station for the miners at the Monte Blanco deposits.” Today, This structure is not only part of the museum at the Ranch but is also a small store and gift shop, but the majority of the exhibits which feature historic trains and mining equipment are located outside. Each outside exhibit is numbered, but unfortunately there were no printed guides available at the time of or visit, so unless there was a sign identifying the piece of equipment, we did not have the full story of what we were looking at. 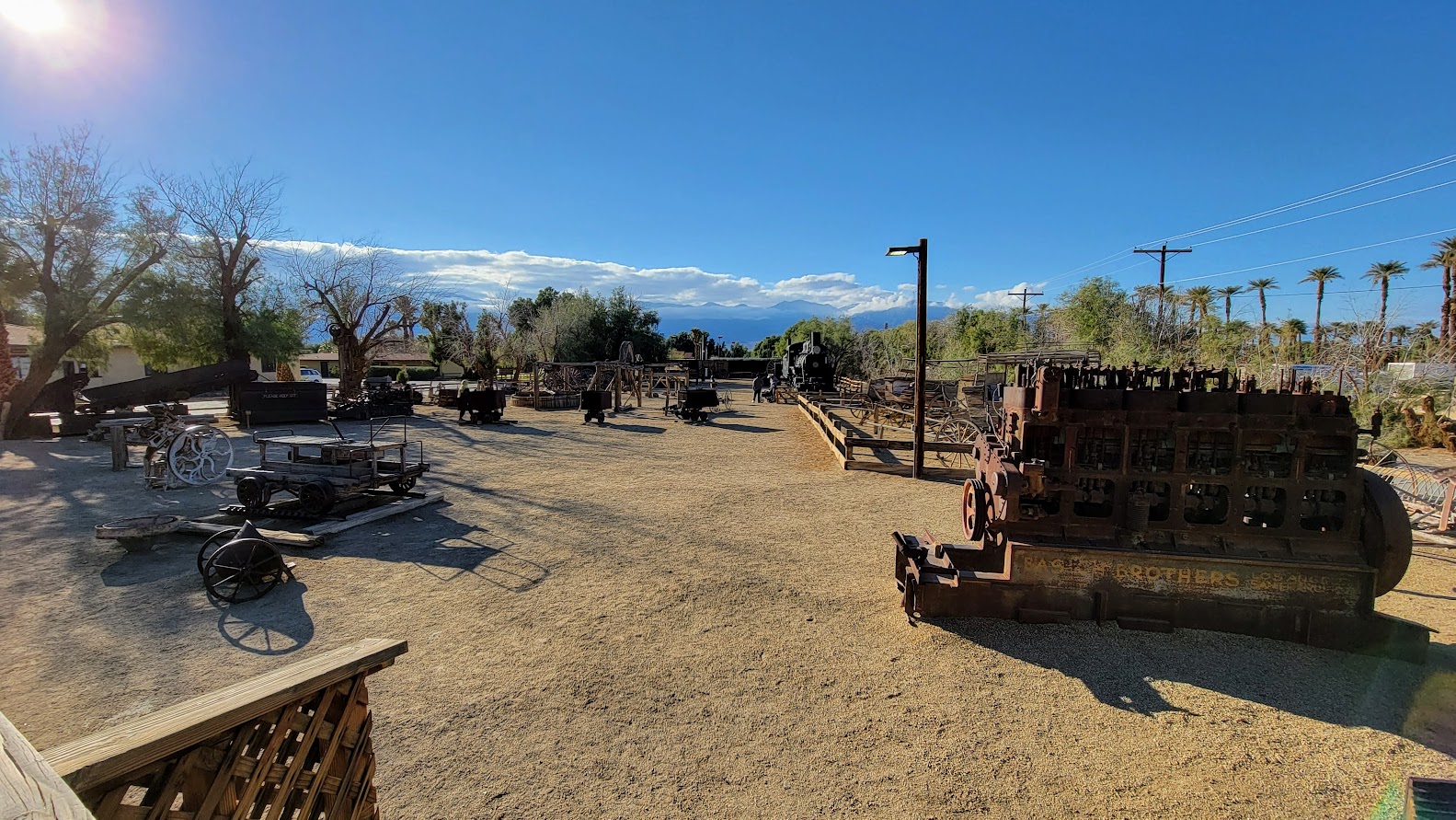 The 20 Mule Team Borax Wagon Train dated 1885 (photo below) was used to haul borax 165 miles in 10 days from Death Valley to Mojave. The wagons were 16 feet by 4 feet by 6 feet with back wheels 7 feet tall and front ones 5 feet tall, each wheel weighed about 1000 pounds. Empty the wagons weighed about 7800 pounds. The borax weighed 24 tons but the entire weight (including food and 1200 gallons of water) totaled 36.5 tons! The mule teams ran from 1883 to 1889 and usually consisted of 18 mules and two horses with the entire train stretching 180 feet. The fascinating process of actually operating the 20 Mule team is explained in detail in the link above – it is amazingly very technically complex and certainly a lost art. 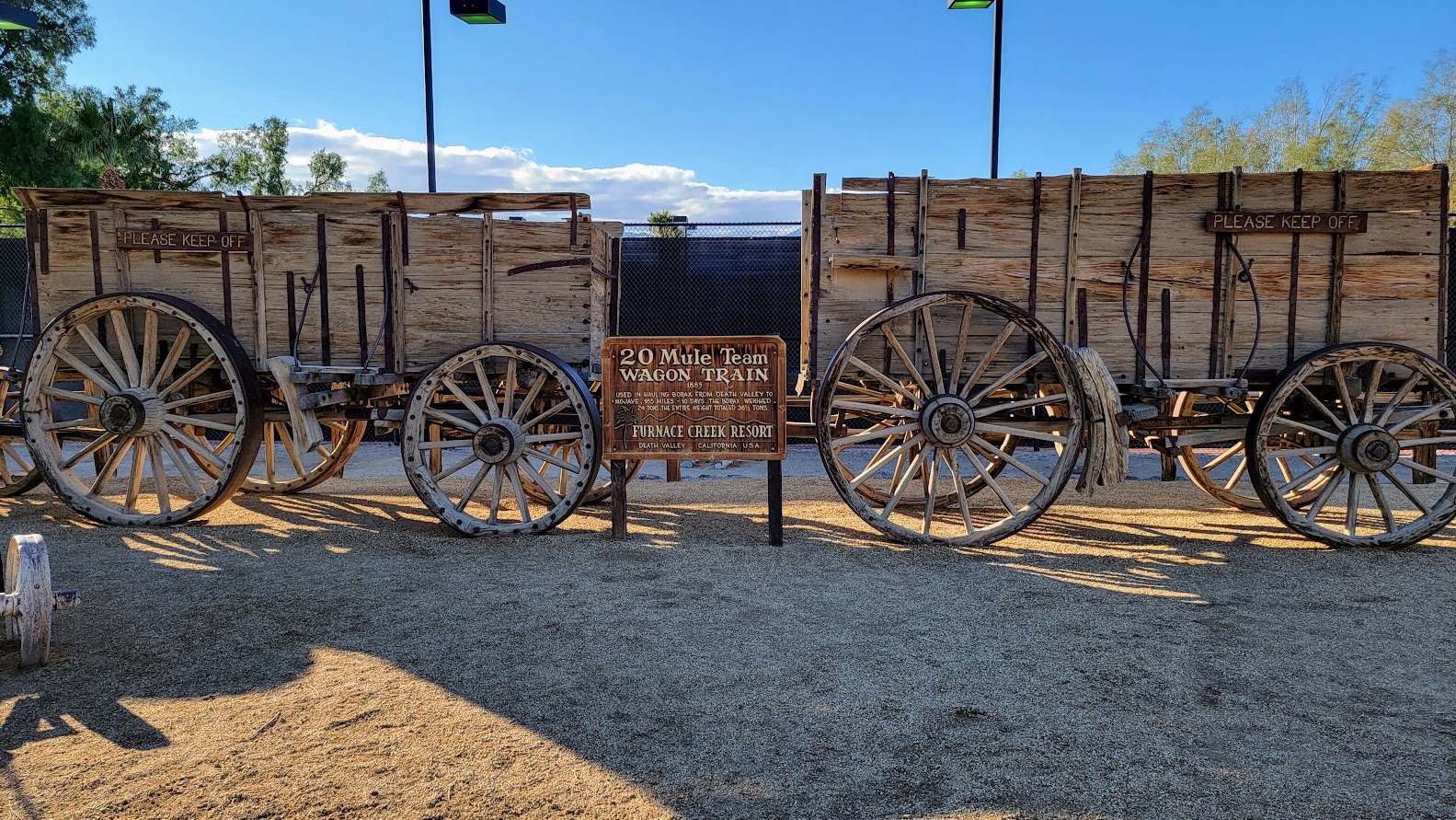 Old Dinah dated 1894 (photo below) was a steam tractor and ore wagon introduced at old Borate, CA to replace the 20 Mule Teams. That tractor was replaced in turn by the Borate and Daggert Railroad but was later used and abandoned on the Beatty Keane Wonder Mine Road (more about that later). 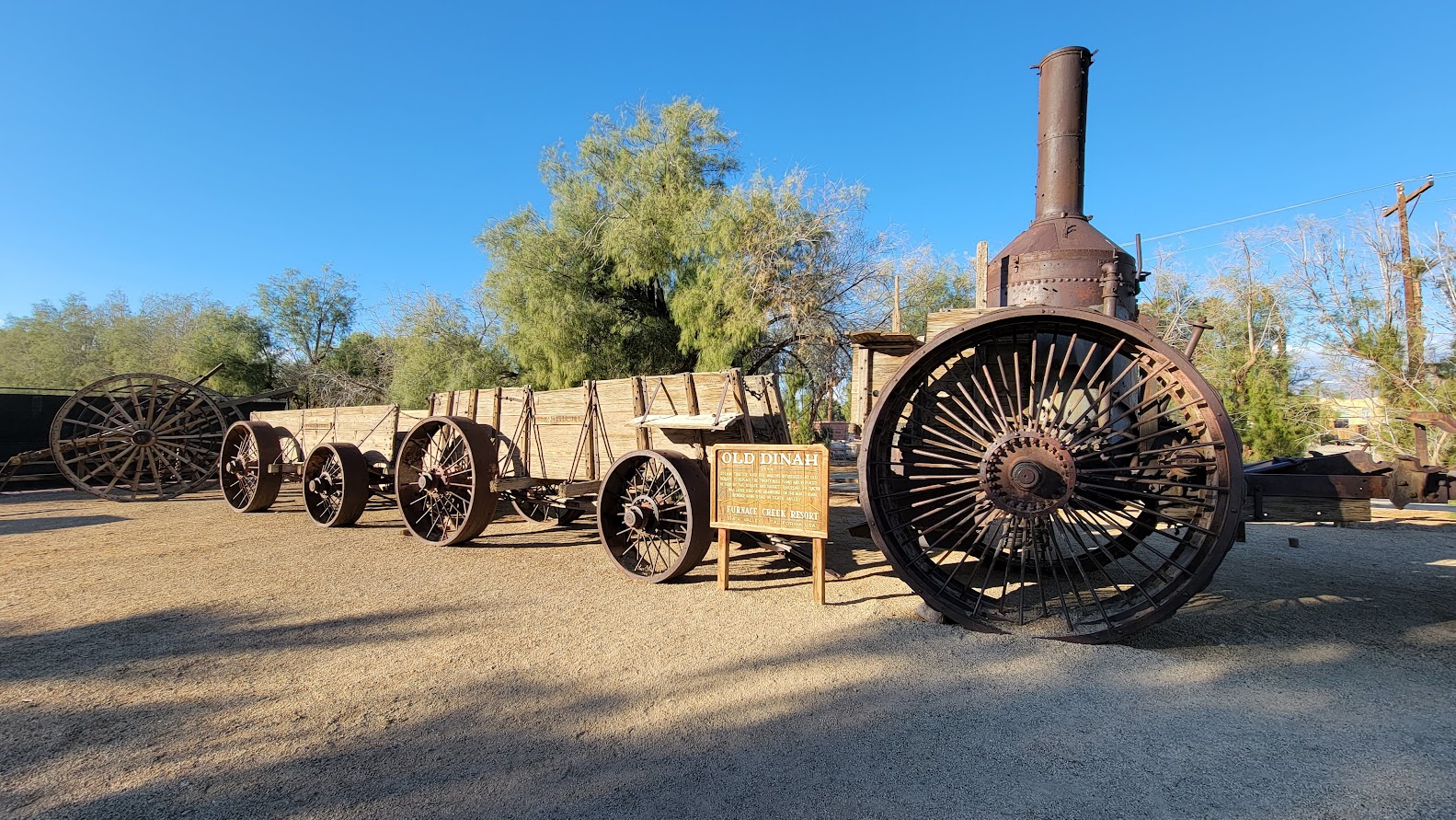 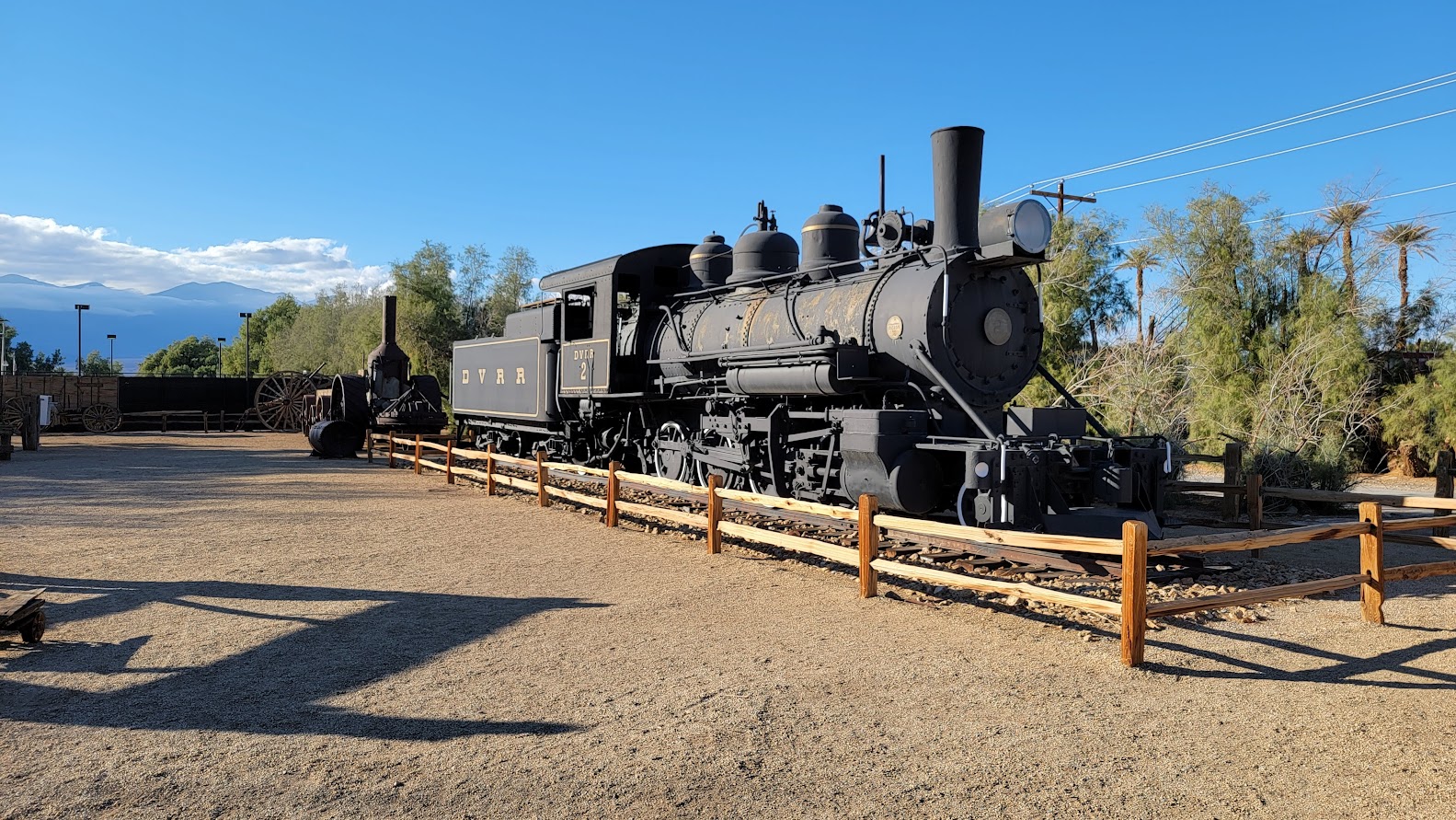 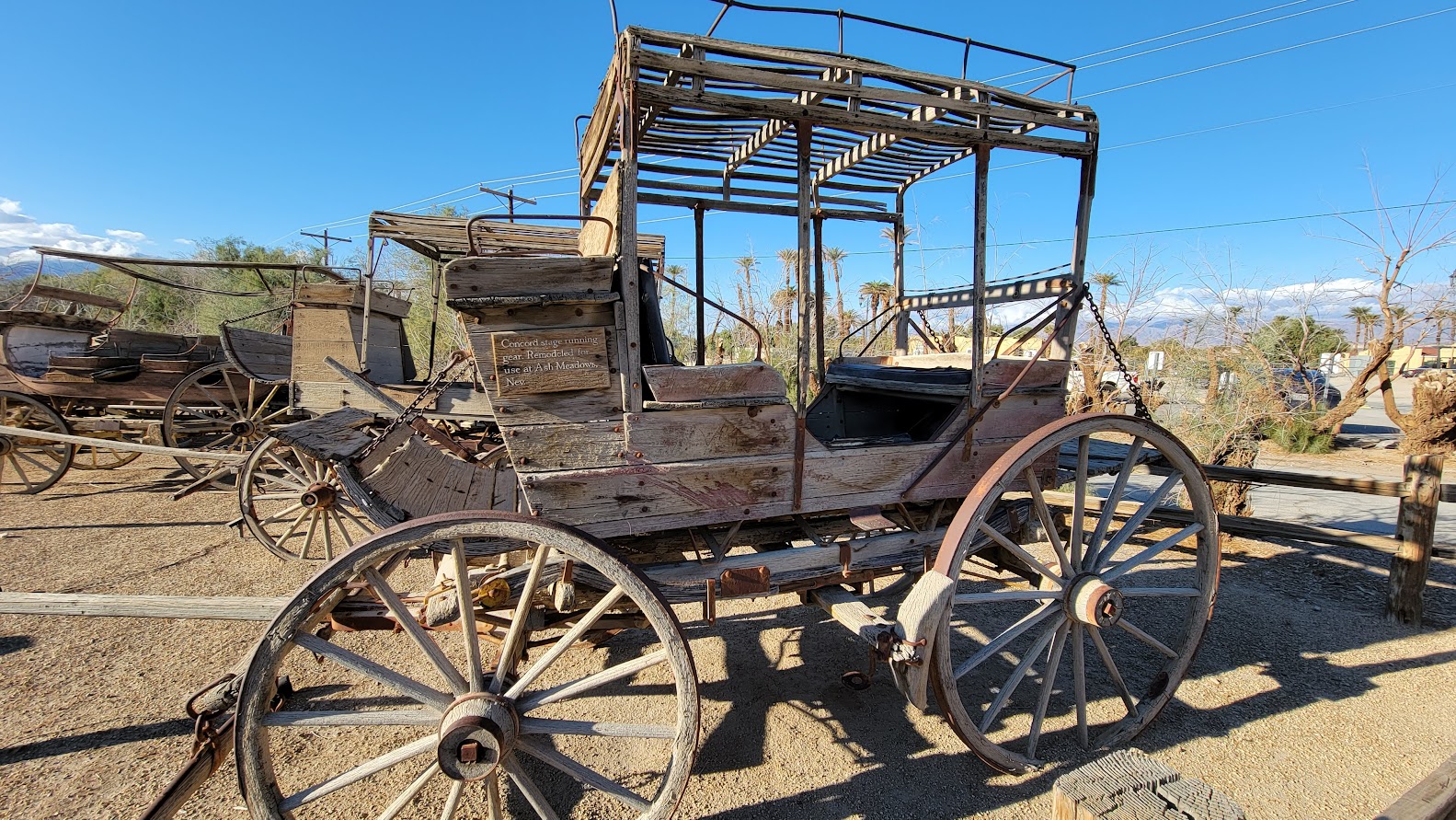 The Harmony Borax Works plant consists of a four-level ruin located on a hillside in Death Valley where there are remains of buildings, machinery, tanks, piping, and waste tailings. Visitors can learn about the processing of borax and see the remains along a 3/8 mile interpretive loop. 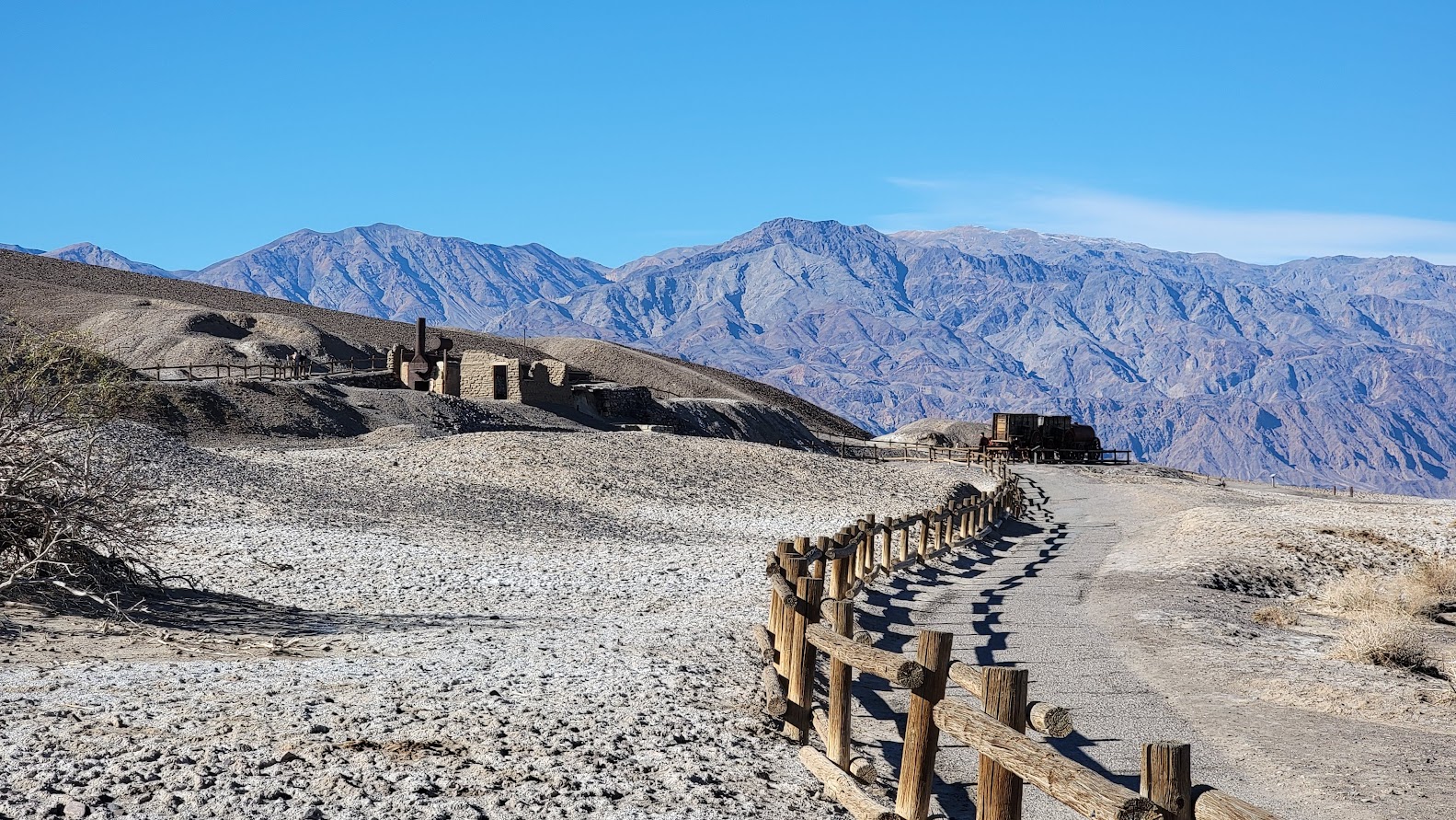 Besides being a perfect place to learn about how Borax was processed and see the ruins of the equipment used, this spot is a popular star gazing site. During winter months, a 45 minute Night Sky Ranger Program at 7:00 p.m. is offered. We weren’t able to make one of the ranger programs but we did return one night for some solo star gazing. Awesome!

Shortly after the discovery of the borax in 1881, William T. Coleman built the plant and began to process “cottonball” borax found on the nearby salt flats in late 1882. In full operation, forty men were employed here, producing three tons of borax daily. 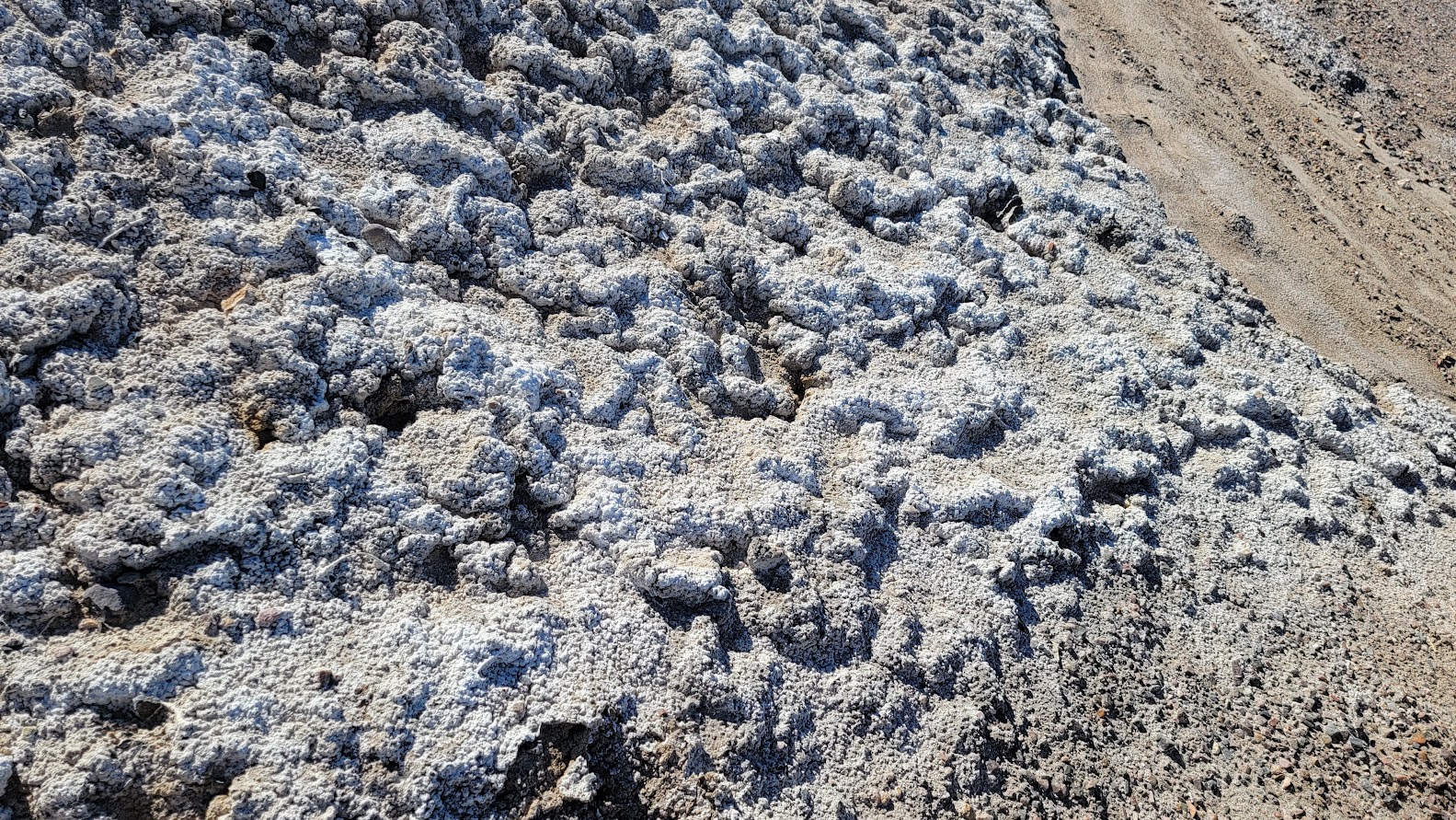 Equipment consisted of two dissolving tanks, eight settling tanks and 57 crystallizing tanks. Due to the extreme heat in the summer months operations ceased because the water would not cool enough to permit the suspended borax to crystallize. 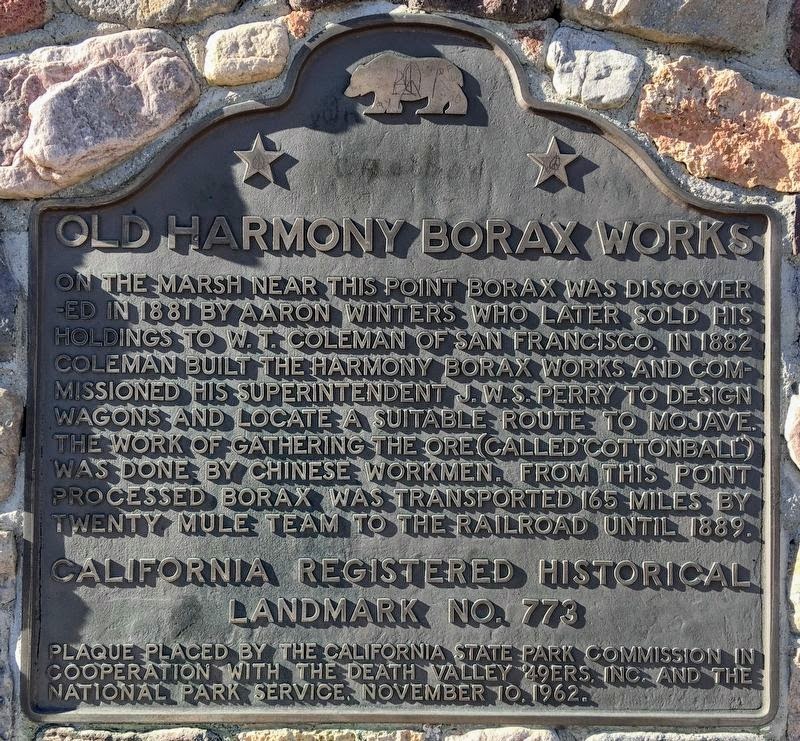 The marker in the photo above might be difficult to read. It says On the marsh near this point borax was discovered in 1881 by Aaron Winters who later sold his holdings to W.T. Coleman of San Francisco. In 1882 Coleman built the Harmony Borax Works and commissioned his superintendent J.W.S. Perry to design wagons and locate a suitable route to Mojave. The work of gathering the ore (called “cottonball”) was done by Chinese workmen. From this point processed borax was transported 165 miles by twenty mule team to the railroad until 1889. 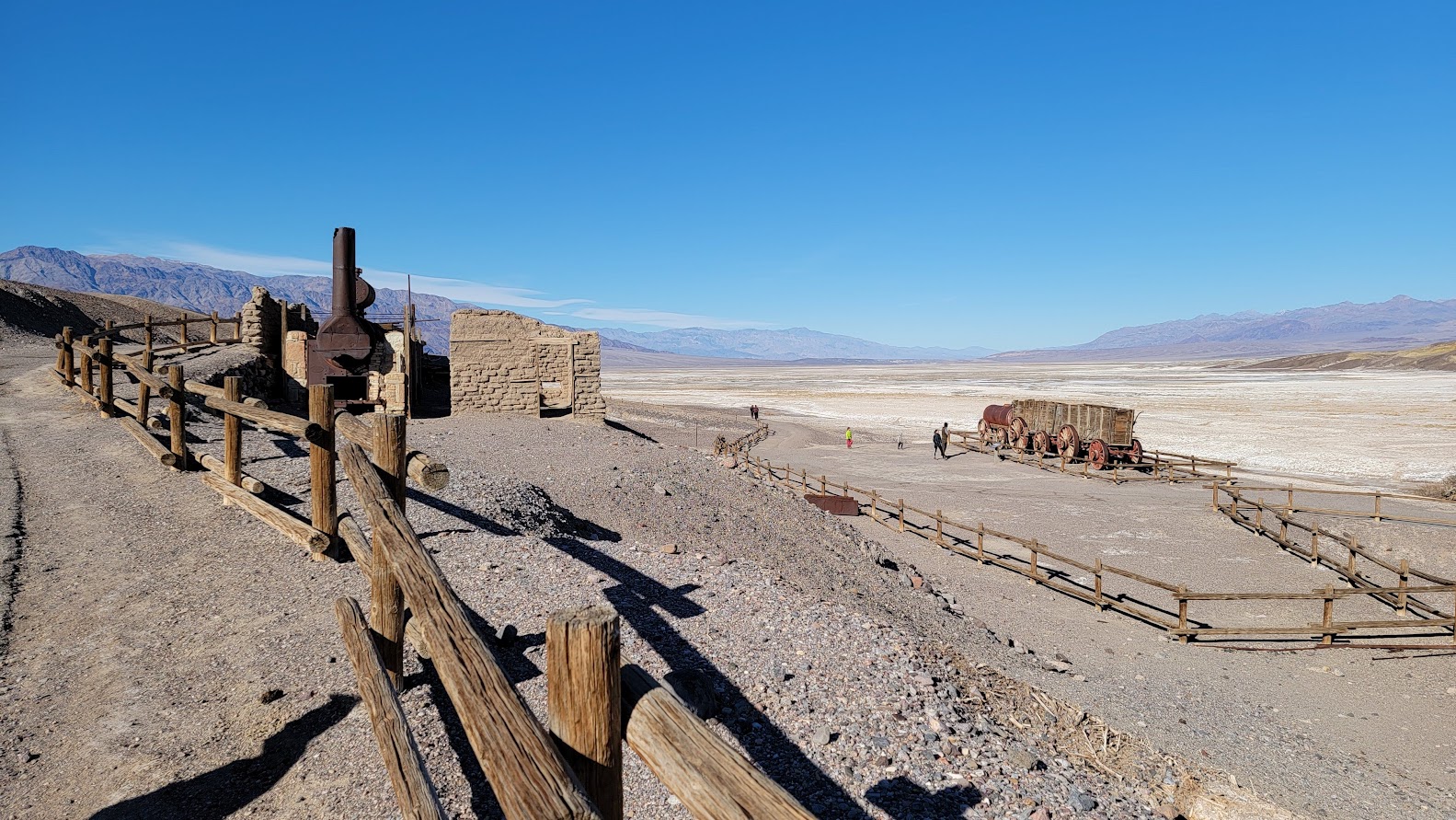 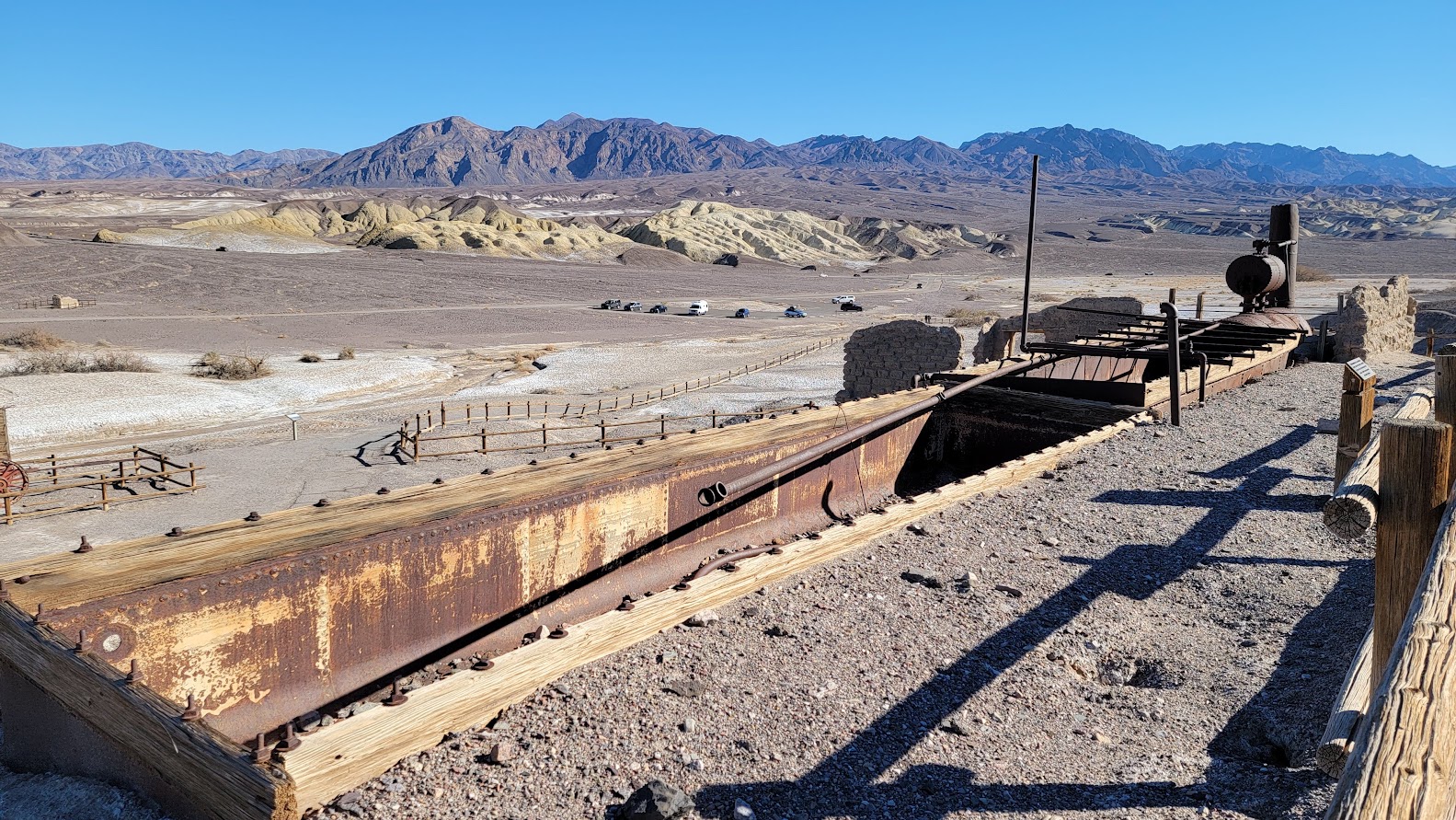 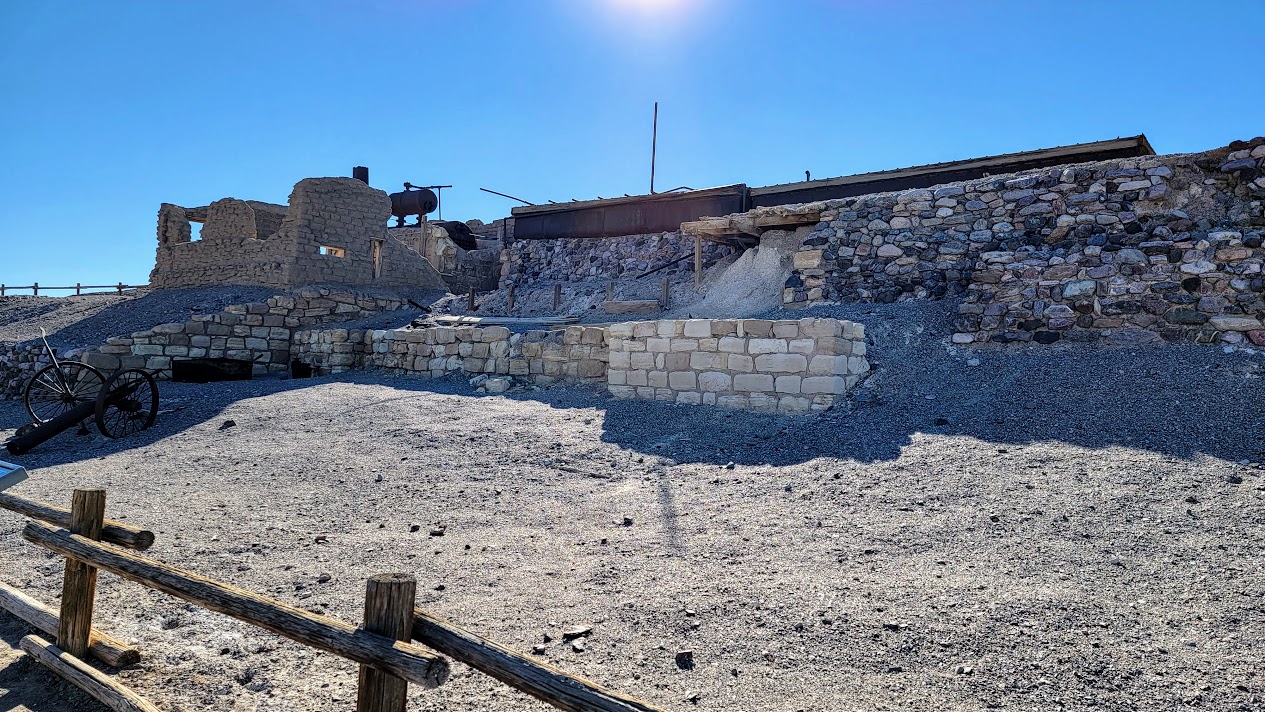 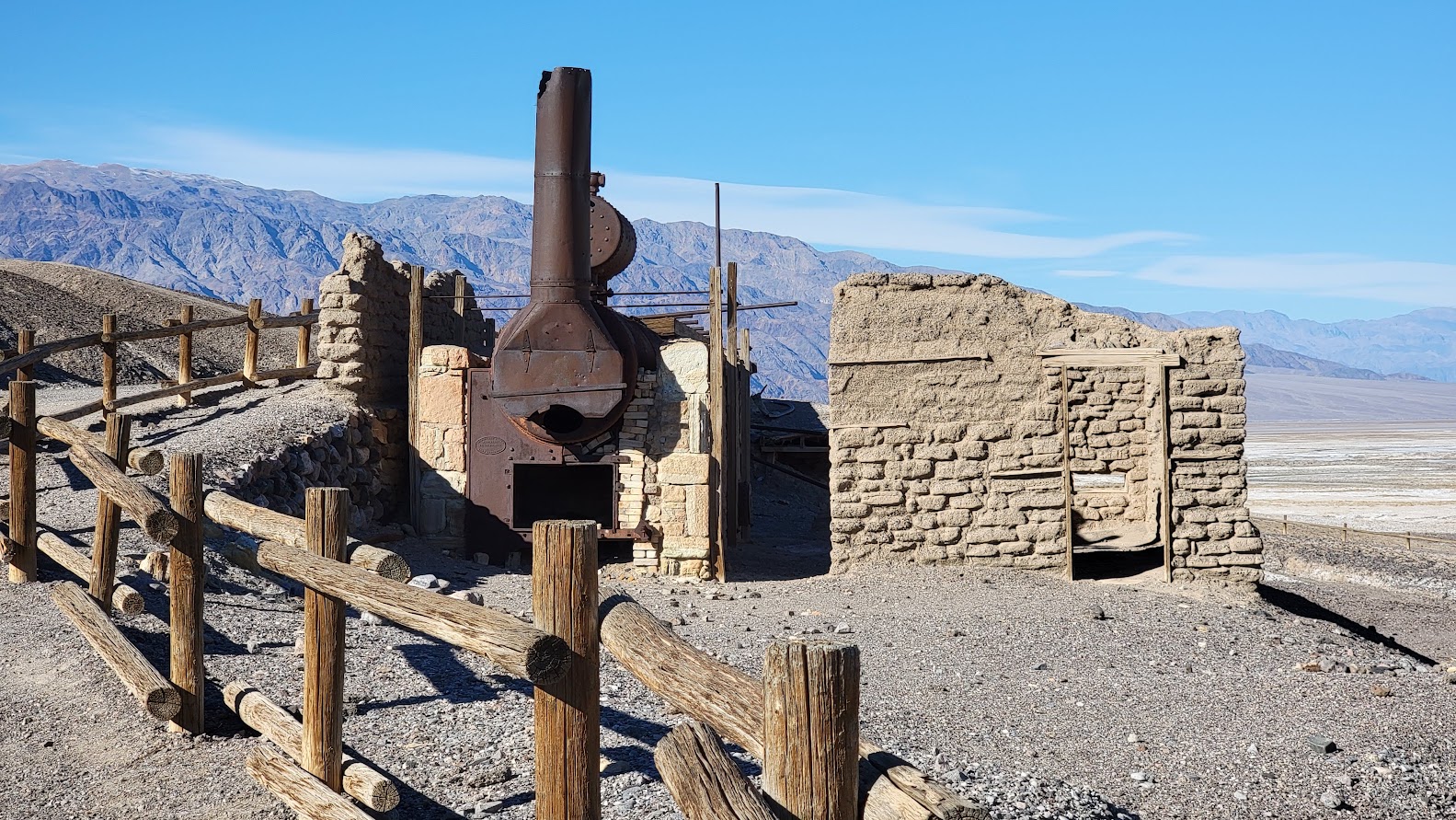 The photo below is a replica of a 20 Mule Team Wagon. The mule teams pulled loads weighing up to 36.5 tons, including 1,200 gallons of drinking water. The rear wagon wheels were seven feet high, and the entire unit with mules was more than 180 feet long. 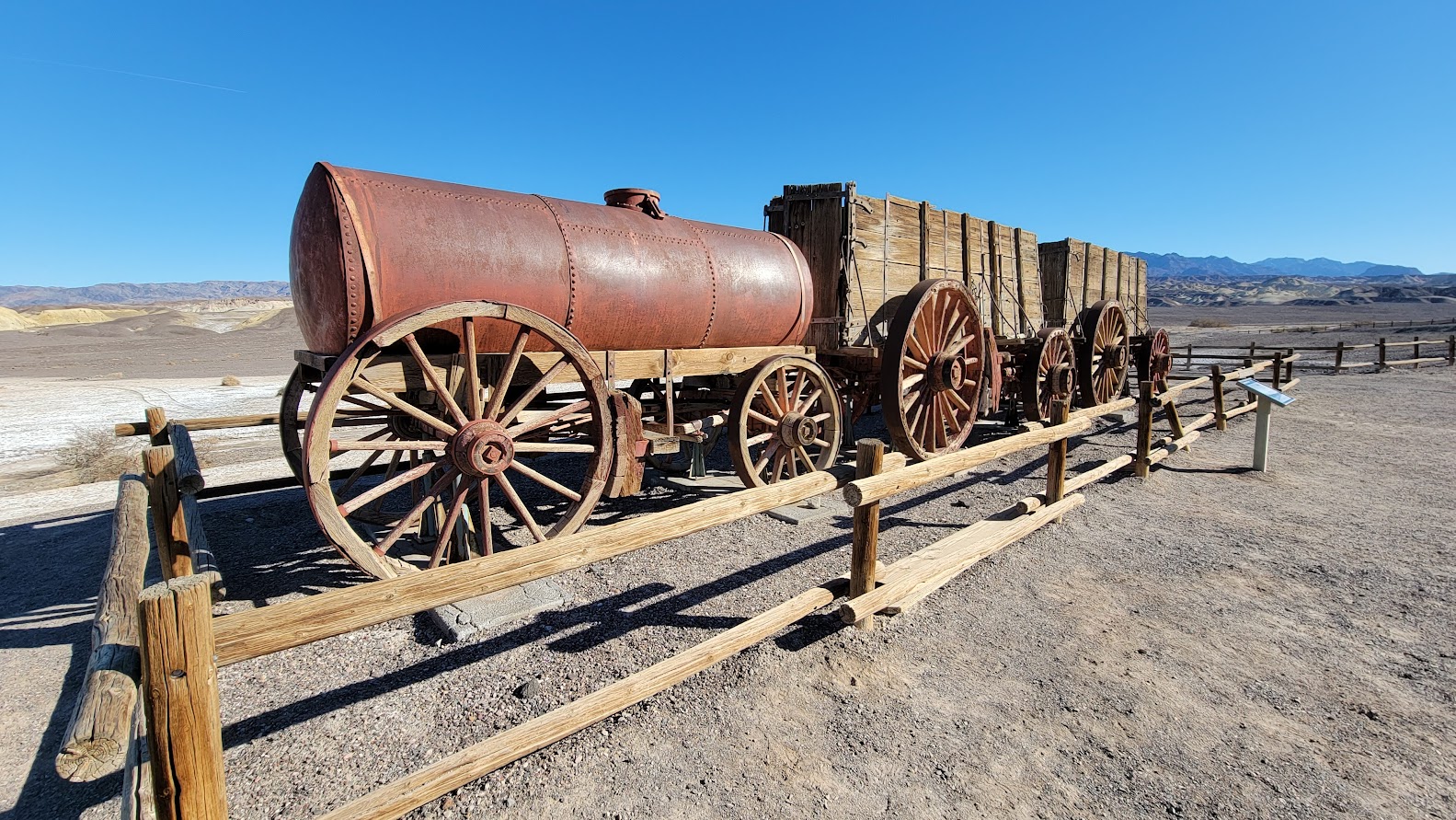 Here’s the route that they took from Harmony Borax Works in Death Valley to Mojave, CA. Between 1883 and 1889, the twenty mule teams hauled 20 million pounds of borax out of Death Valley.

Much of the work performed here at Harmony Borax Works was done by Chinese laborers recruited from San Francisco. They were paid $1.30 per day less lodging and the cost of food that they purchased from the company store. 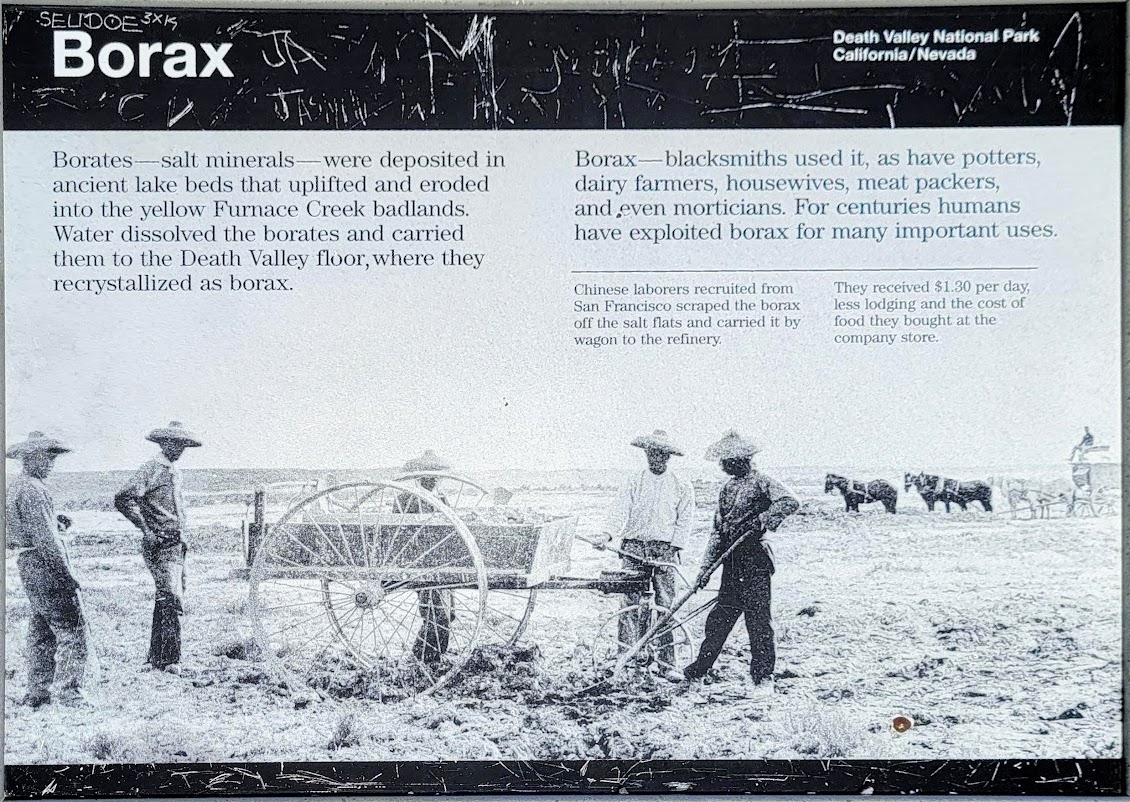 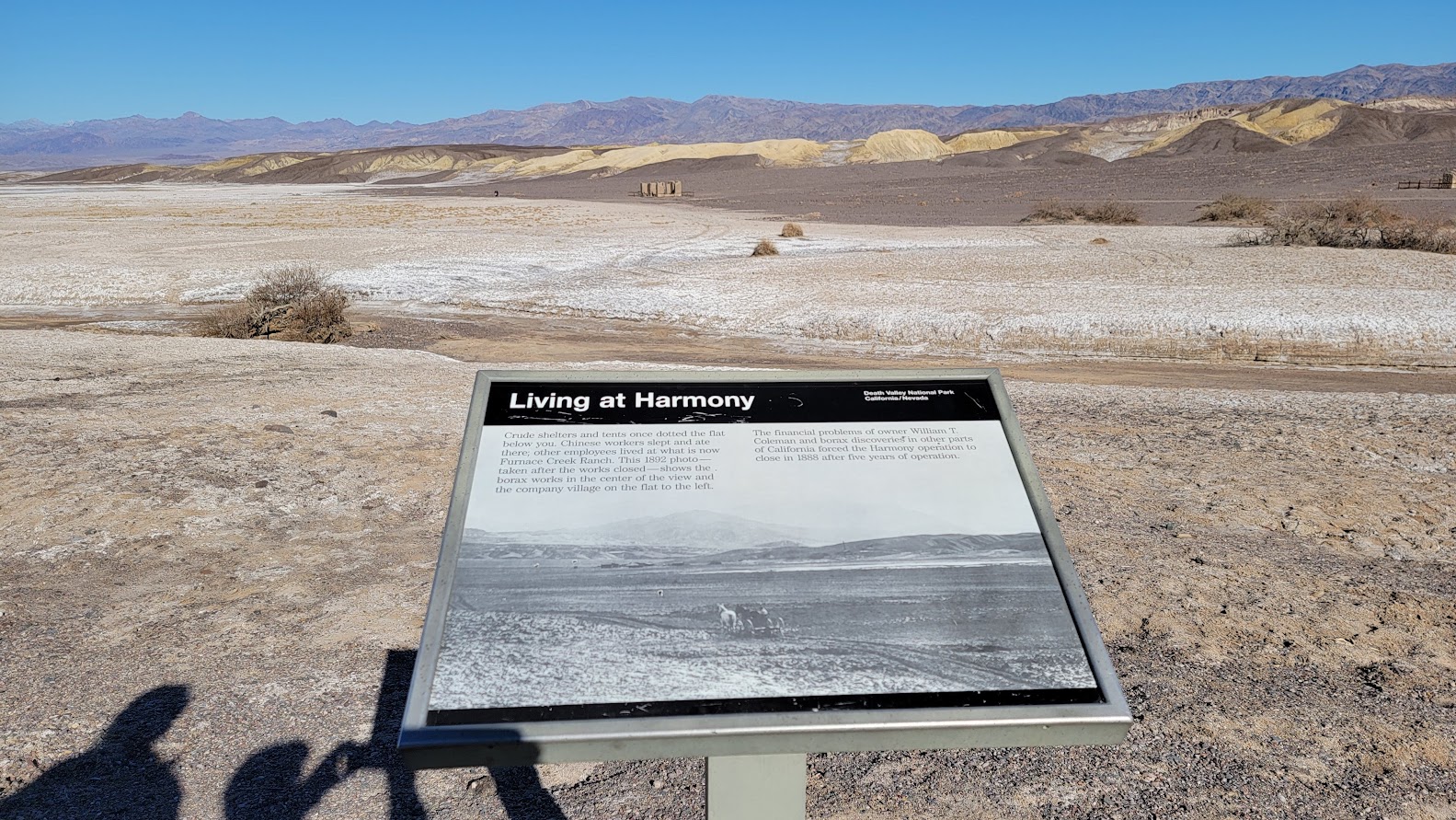 Popularity of the product and Death Valley tourism increased substantially over the years, thanks to adding the 20 Mule Team name to the Borax box in 1891 and an aggressive advertising campaign which generated international publicity on the very popular Death Valley Days radio and TV shows, the longest running serial. Both were sponsored by Pacific Coast Borax Company (later U.S. Borax).

Today the 20 Mule Team Borax product is still in existence, owned by the Dial Corporation and located in Boron, CA. The packaging may have changed over the decades but the product remains the same. 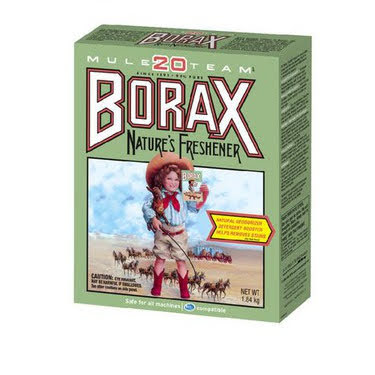 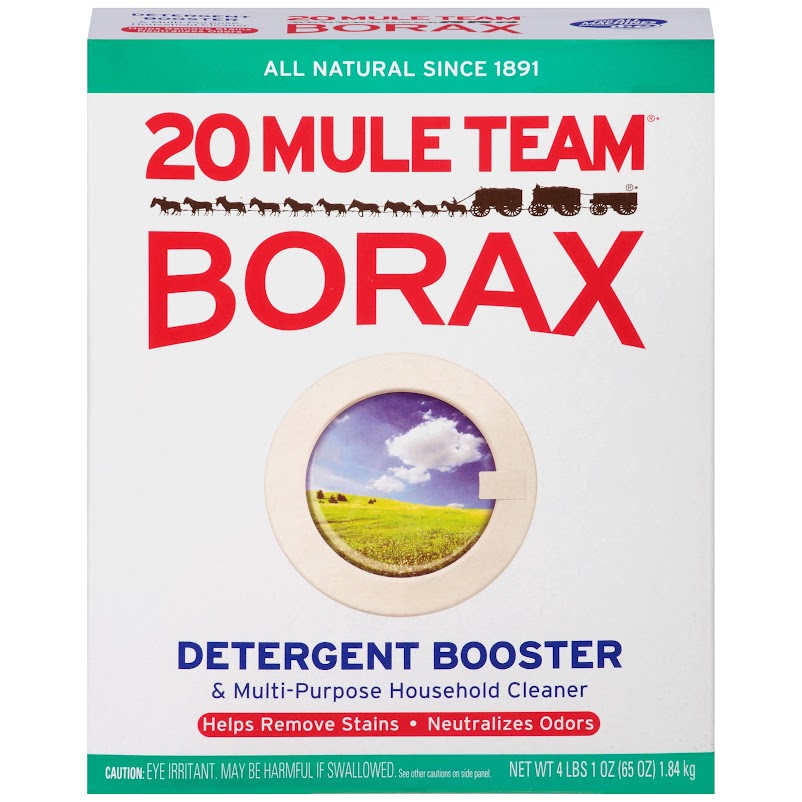 Not only is it used for cleaning and laundry, it is also used in a variety of other products from medicated bandages, antiseptic solutions, cosmetics and enamel, to photographic developers, to fire retardant textiles and wood, to playing cards and glazed papers, to arts and crafts projects.

Where, oh where would we be without it?