Huh? North? Up? Down? East? Heading north and up to go down and east? Independently or even in pairs they may make sense but certainly not all at once. Is that really possible? Rhode Island to Maine is definitely north and you do have to travel up through the New England states so that concept is easy to grasp. And yes, much of Maine is definitely east of RI so that makes sense. But how does the perplexing term  “downeast” apply? As a true born and bred New Englander I’ve heard that term before but never really understood where it came from. Nothing like writing a blog post to force one to find out the whys and wherefores of a particular place or a particular term!

According to Down East magazine “the term was coined by ship captains sailing merchant ships in the area. When ships sailed from Boston to ports in Maine (which are to the east of Boston), the wind was at their backs, so they were sailing downwind, hence the term ‘Down East.’ When they returned to Boston they were sailing upwind; thus, many Mainers still speak of going ‘up to Boston,’ despite the fact that the city lies approximately 50 miles to the south of Maine’s southern border.” Guess that conundrum is resolved at least in my head, how ’bout yours?

Before we were RV’ers, a trip to NH and Maine was a pretty regular occurrence but it’s been a long time since we’ve journeyed to that neck of the woods, probably at least 10 years if not longer.  Despite the fact that we shed the responsibility of a house (2013), sold our condo at Mt. Washington Place in Bretton Woods, NH (2006) and are no longer slaves to our corporate careers (2006), it would seem that we should have the time.  After all, it’s not like it’s terribly far, 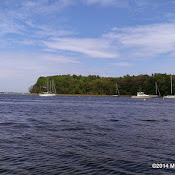 Each summer we’d talk about heading up north/down east but our talking never resulted in our doing. Somehow, over the past few years, the lure of the ocean, it’s summer breezes, the sparkling waters of Narragansett Bay and spending time on our boat lulled us into a few months of being immobile, of staying put in one place, of nurturing our childhood “home” roots. Enough of a force to quell that ever lurking wanderlust from bubbling up during the summer. It was so easy just to settle in, to sit and relax and to enjoy life on the water.

But this year we vowed that it would be different, so before we changed our minds and before we even arrived back in RI, we made the commitment to head up north and downeast  by making some reservations. Not only to visit our favorites, Bar Harbor and Acadia National Park, but to spend time with new friends, Betsy and Nancy (RV-A-GoGo), who are work camping at the Narrows II RV Resort in Ellsworth, Maine, plus visit with Clayton and Gail from Riverbend who reside in Ellsworth during the summer.

We also planned to stop in Warner, NH to visit my brother and his wife at their year round place for a few days. Just to make sure we didn’t get bored, we planned a short stay in Wells, Maine which would allow us to spend a little bit of time in the coastal towns of Kennebunkport and Ogunquit. We also wanted to spend some quality time in the picturesque port of Camden. Yes, we had been through these towns many times before on previous trips, but we were always so fixated on Bar harbor so we would fly through. We were also hoping for an opportunity to visit our good friends, Jim and Ann, former next door neighbors at our Bretton Woods, NH condo to see their new home in Dover, NH. No problem leaving our spot at Sun Valley – it is ours as long as we pay our rent each month so we can come and go whenever we want.

So off we went on the morning of June 11th, heading for our first destination, Mile Away Campground in Henniker, NH about a 2-1/2 hour drive. Since there wasn’t a big selection of campgrounds that would be fairly close to my brother’s place in Warner, I had called earlier in the week to make sure they were big rig friendly – the gentleman I talked to (later found out he was the owner) assured me that he had the perfect site for us. 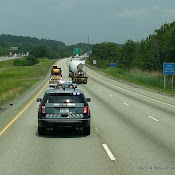 Our route would take us up I-95/I-295N through RI, then to I-495N to US-3N and  the Everett Turnpike, then to I-89 and NH-9W. It was a mostly uneventful drive except at an onramp multiple state trooper cars swooped onto the interstate,  lights flashing and blocking the entire width of the highway. What’s with that? No sign of any accident or anything. Suddenly we noticed a huge wide-load trailer being escorted with what we at first thought was an airplane wing but then Rob suggested that it most likely was a blade from a wind turbine on it moving into the left hand lane. At first I thought with dismay, what bad luck to get stuck behind this circus act. Not so, this thing, whatever it was, was accelerating at a pretty good clip. In fact, it was moving so fast it left us in the dust so I was never able to get a good picture of it!

Our drive once again returned to normalcy. That is until we stopped along I-93 at the newly renovated rest stop in Hooksett, NH. When we used to travel to our condo in NH, this was always a good place for a break, but back then besides the State Liquor Store and rest rooms it didn’t have much to offer. But after major renovations in 2014, it now has a 20,000 sq. ft. Liquor Store, a 16,000 sq. ft. Food Court, a 3,000 sq. ft. Country Store, 300 parking spaces, electric vehicle power stations, 16 fossil fueling stations, a 1950s style diner, and a dog walking park. Pretty nice (jeesh, since when did I start doing promos for rest areas???).

We were sitting there in our front seats enjoying a quick sandwich when suddenly…..kaboom crunch, scrape, crunch….we looked to our right in horror, both gasping “oh no” at the same time. A man driving an older motor home apparently couldn’t find an empty parking space and had tried to turn left towards the exit. Yikes, who suddenly put that lamp post with a huge cement base in his way? Not sure how he could have missed seeing it there. Perhaps he was a new RV’er and neglected to follow the general rules of when to start a turn or he just plain “forgot” it was there. Whatever the reason, it definitely ruined his day. Three of his driver side basement doors were smashed and partially ripped off. And even more amazing (at least to us), the guy never stopped to get out and look at the damage – he just backed up and carried on his way. Maybe too embarrassed, thinking that if he ignored it then everyone else would as well. Sure glad he didn’t park next to us! Unfortunately we have no pics or dash cam video of the demolition derby!

After that bit of excitement, we continued on I-93 for a short distance before merging onto I-89N, then taking exit 5 west, finally turning onto Old West Hopkinton Road to Henniker, NH 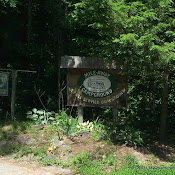 where we had a reservation at the Mile-Away Campground. We were a little apprehensive about this place, the reviews were just okay with a few negatives primarily because it was an older and mostly seasonal campground.

When I called to make a reservation the woman I talked to, although very nice, was brand new and not very knowledgeable. I was told that we would be on 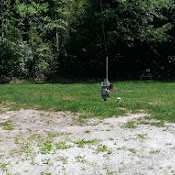 site #65 in the safari field, one of the few full hookup sites with 50 amp electric service and big enough for our size rig. At the registration office there wasn’t a good place to park so we continued to the safari field, then walked back to the office to check in.

Hmmm, this looked interesting….instead of the usual well marked sites, there was a confusing hodge podge of utility poles, 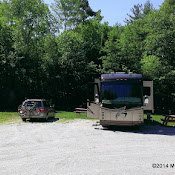 picnic tables and fire rings. Didn’t seem to have much rhyme or reason to it so in the office we had to ask exactly which way site #65 was situated. Once back at the site, Rob easily maneuvered the coach in but then we realized there was no 50 amp service, just two 30 amp plugs. The site next door, site #66, did have 50 amp. So I called the office – the girl told us that their computer said that #65 was a 50 amp site, kind of insinuating that we were mistaken, after all the computer has to be right. She eventually offered to call the owner so he could come and show us where the 50 amp service was.  OK, that’s fine, thinking to myself that he can’t show us something that isn’t there.  After waiting a bit, the owner’s son came by in a golf cart. Yep, he agreed, no 50 amp service so he told us to move to site #66. Check out our detailed review (Coming Soon). 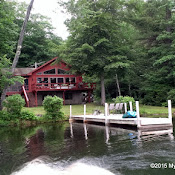 After we settled in, we headed to my brother and sister-in-laws place which is on a small pond in the woods of NH where we had a wonderful, very 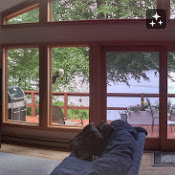 They both just had cataract surgery earlier in the week so I had told them not to fuss but they, particularly my wonderful sister-in-law, apparently didn’t hear those words. It was a short visit 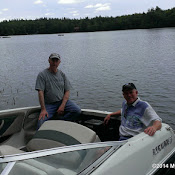 but a gourmet delight! 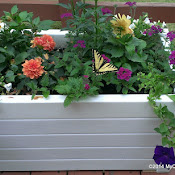 potatoes and grilled asparagus were on the menu for dinner. Dessert was a home made carrot cake. The next morning when we arrived, we were served a delicious brunch – a ham and cheese quiche, home fries made from scratch, fresh fruit and english muffins.

Silly me, I thought that would be the end of her gourmet-ishness but nope that night we had barbequed pork tenderloin, pasta salad (I’m not a

big fan of pasta salads but this was yummy), a strawberry spinach salad with poppy seed dressing, followed by more carrot cake. Yikes, good thing we weren’t staying longer. Jeesh, sure glad she didn’t fuss! In between all this eating, we enjoyed spending time on the pond in their motorboat and just enjoying each others company. That night we reluctantly said our goodbyes since we were heading to Maine the next morning. Thanks, Paul & Peg for a wonderful time!

Stay tuned for our next stop!